This is a special guest post from my husband, David. I had to do adult things on Saturday while he went out and had fun trail riding.

With spring and summer around the corner, it’s time to start thinking about what what I want to accomplish with the horses this year. After completing my first 50 at Quicksilver in October, I definitely want to keep progressing with endurance this year. I’m planning on doing the 30 at the Veterans Endurance Tribute in the middle of April to start things off, but with all of the wet preventing much riding over the winter there’s definitely some conditioning that needs to happen between now and then.

Since Olivia was busy, Eugene and I were left to our own devices. With nice weather for a second weekend in a row I figured it’d be a good opportunity to get some exercise in for both of us. I planned on taking him over to Rancho San Antonio for a long ride since it’s nearby and has some great trails. Unfortunately, it also only has a single equestrian parking spot, and when I got there it was already taken. With Rancho not an option we turned around and headed over to the Stevens Creek County Park parking lot, from which we could ride into Fremont Older, which is just across the reservoir from our barn. 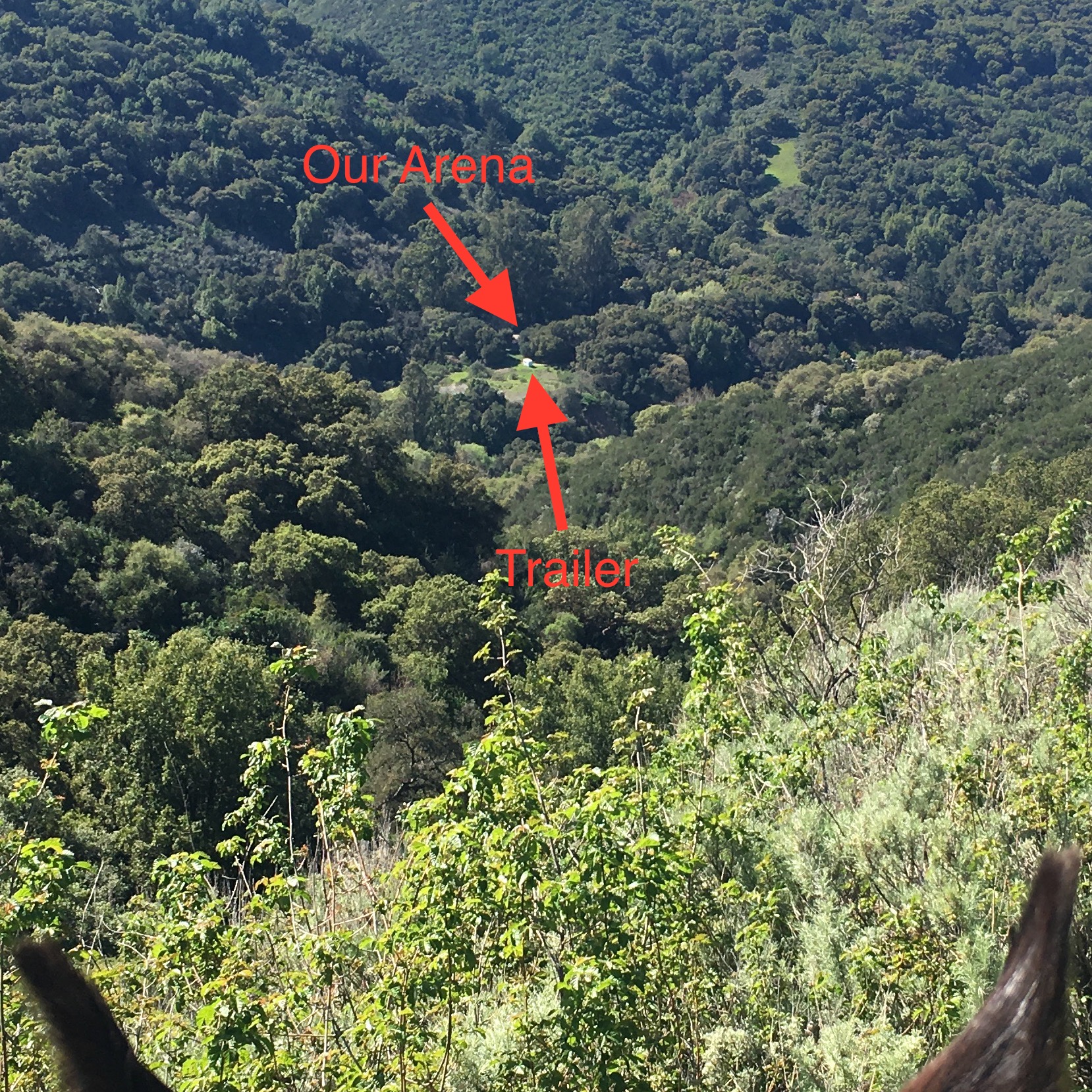 The trail starts up a pretty steep hill, so we did a mix of trot and walk on our way up. From there we headed out to the overlook, from which you can get a pretty good view over the South Bay. It was already clear at this point that there were quite a lot of people out and about taking advantage of the nice weather, including a good number of cyclists. Fortunately, they were all well behaved and Eugene is rapidly deciding that cyclists are completely uninteresting, which is wonderful. 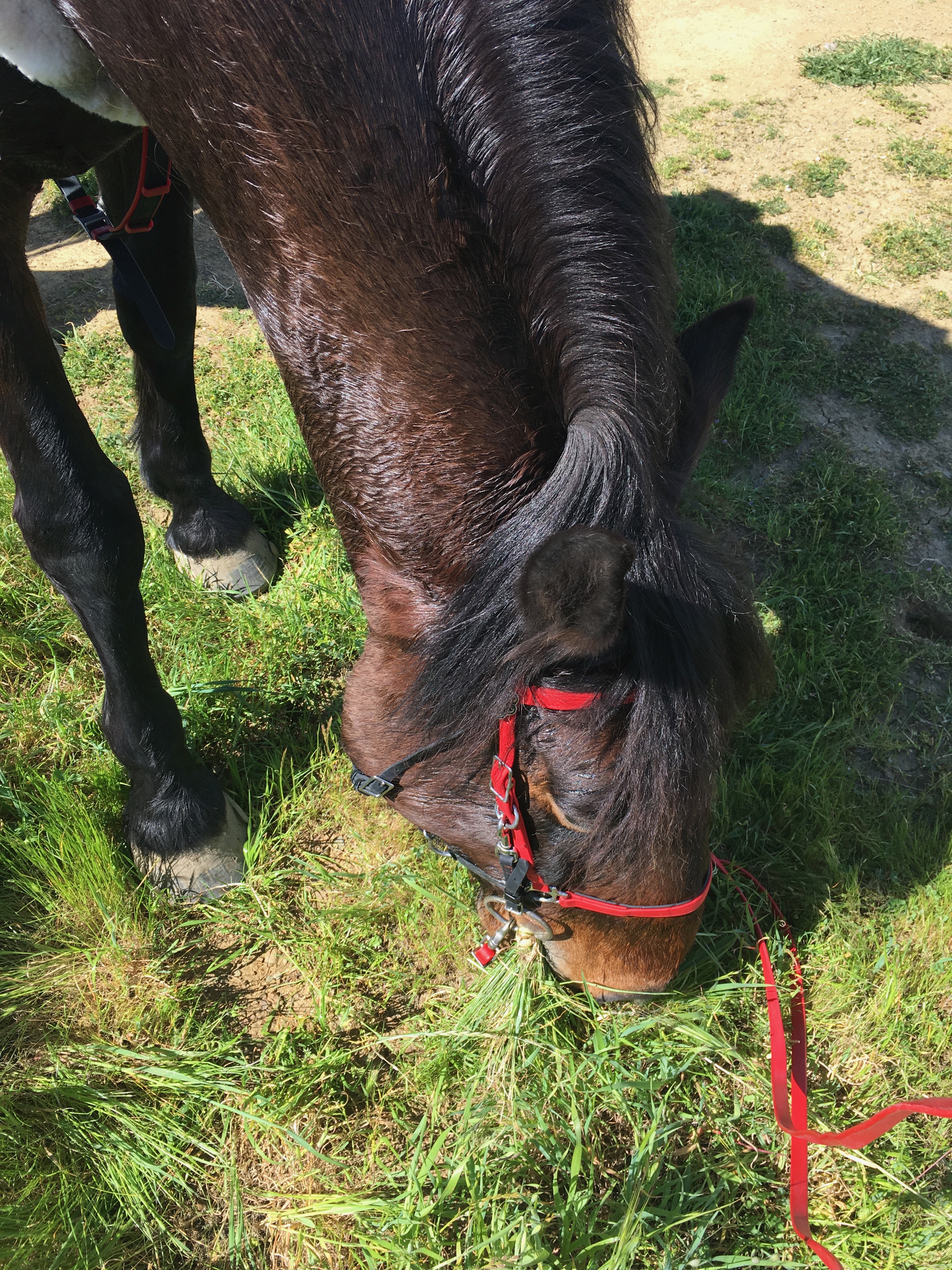 After a quick break at the overlook – which Eugene thought was clearly intended solely to let him stuff his face with the green grass – we headed off. I didn’t really have a plan at this point, so I just sort of took whichever fork in the trail would take me vaguely toward the back end of the park. Eugene actually picked up the rhythm and seemed to get into the swing of things about three miles in, happily trotting along and trying to break into canter whenever the grade got steep enough. 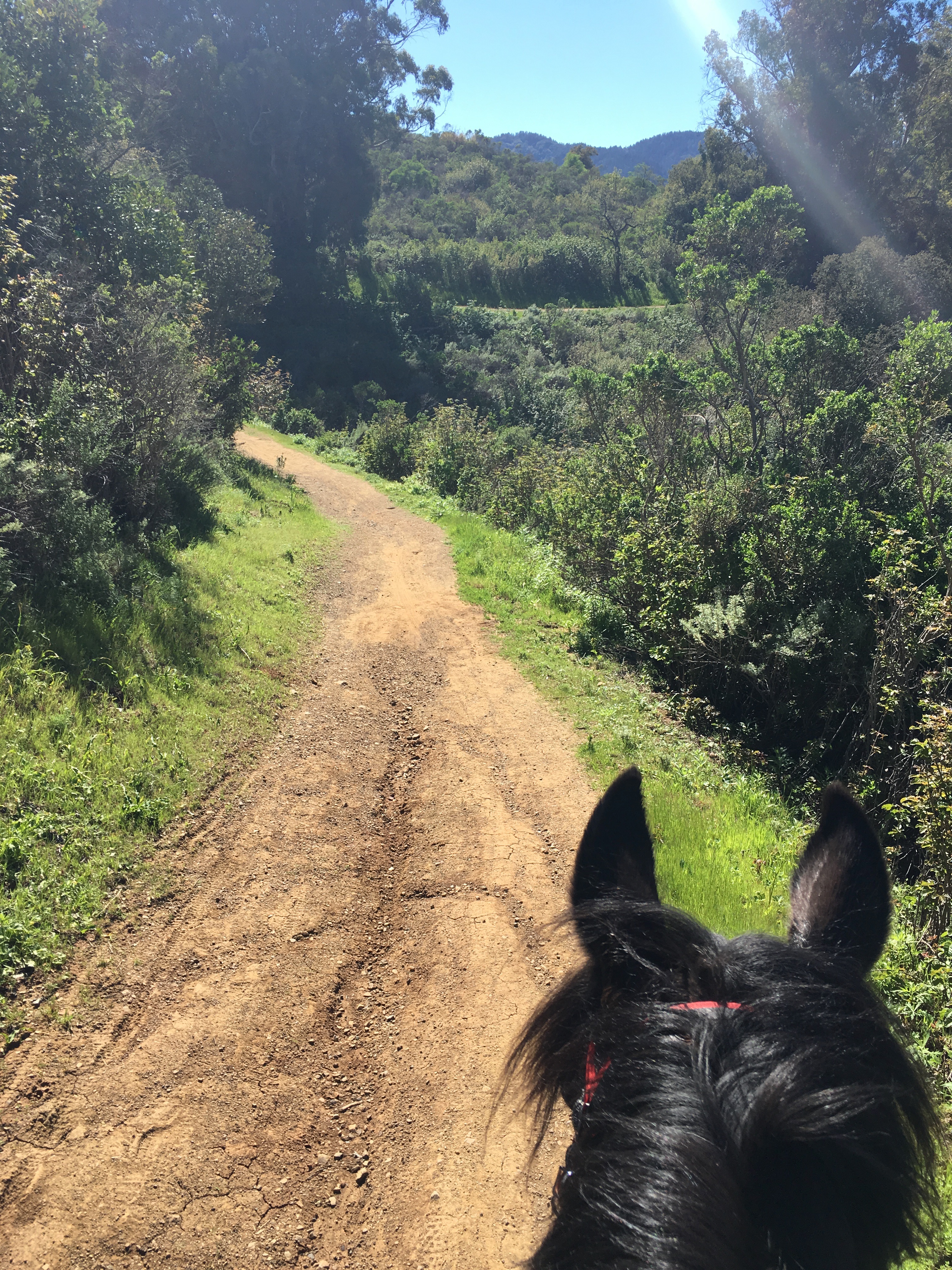 Fremont Older runs up against Garrod Farms, and there were a couple of trail rides out and about in the park as well. Fortunately, today they just seemed to be family outings, rather than the long nose-to-tail strings that we’ve often seen in the past. They stick to the wider fire roads, so it’s generally pretty easy to find a safe place to pass them – especially when half the string is stopped munching on the nice green grass and the poor guide is trying in vain to tell the guests to give them a sharp kick.

Not long after passing the trail rides I came up to the short jaunt up to Maisie’s Peak, which is the highest point in the park. There’s a small overlook there which gives a good view out over most of the park; in fact, you can see the first overlook I rode to off in the distance. 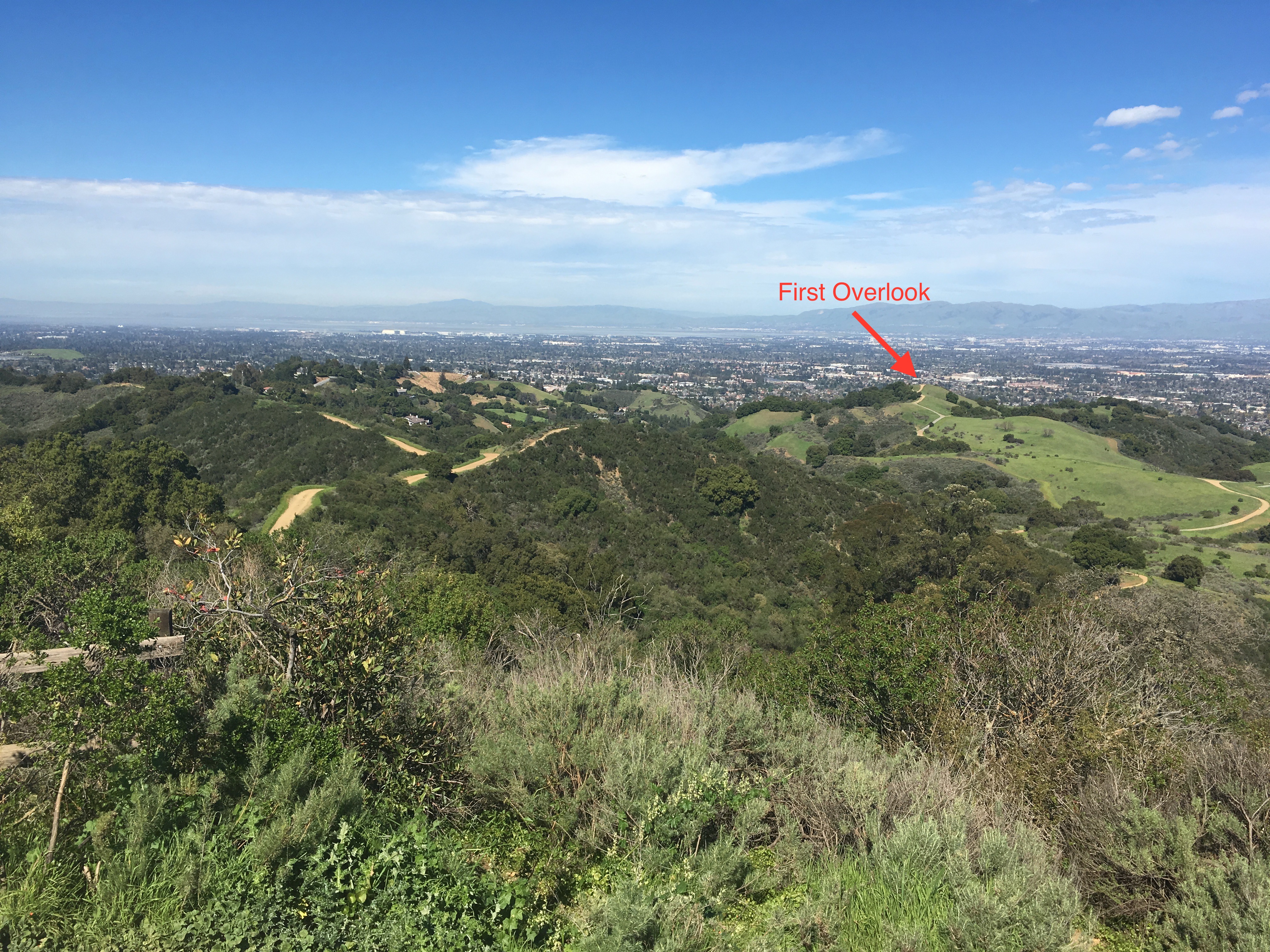 After that brief picture stop I went back to wandering around the trails near Garrod, not really paying attention to a particular route. Eugene eventually started slowing down a bit, and after some more of that I decided it was about time to head back.

Before heading down the main trail, though, we rode back out to the first overlook for another quick stop and bite of that tasty green grass – clearly what Eugene thought the whole trip should have been about. 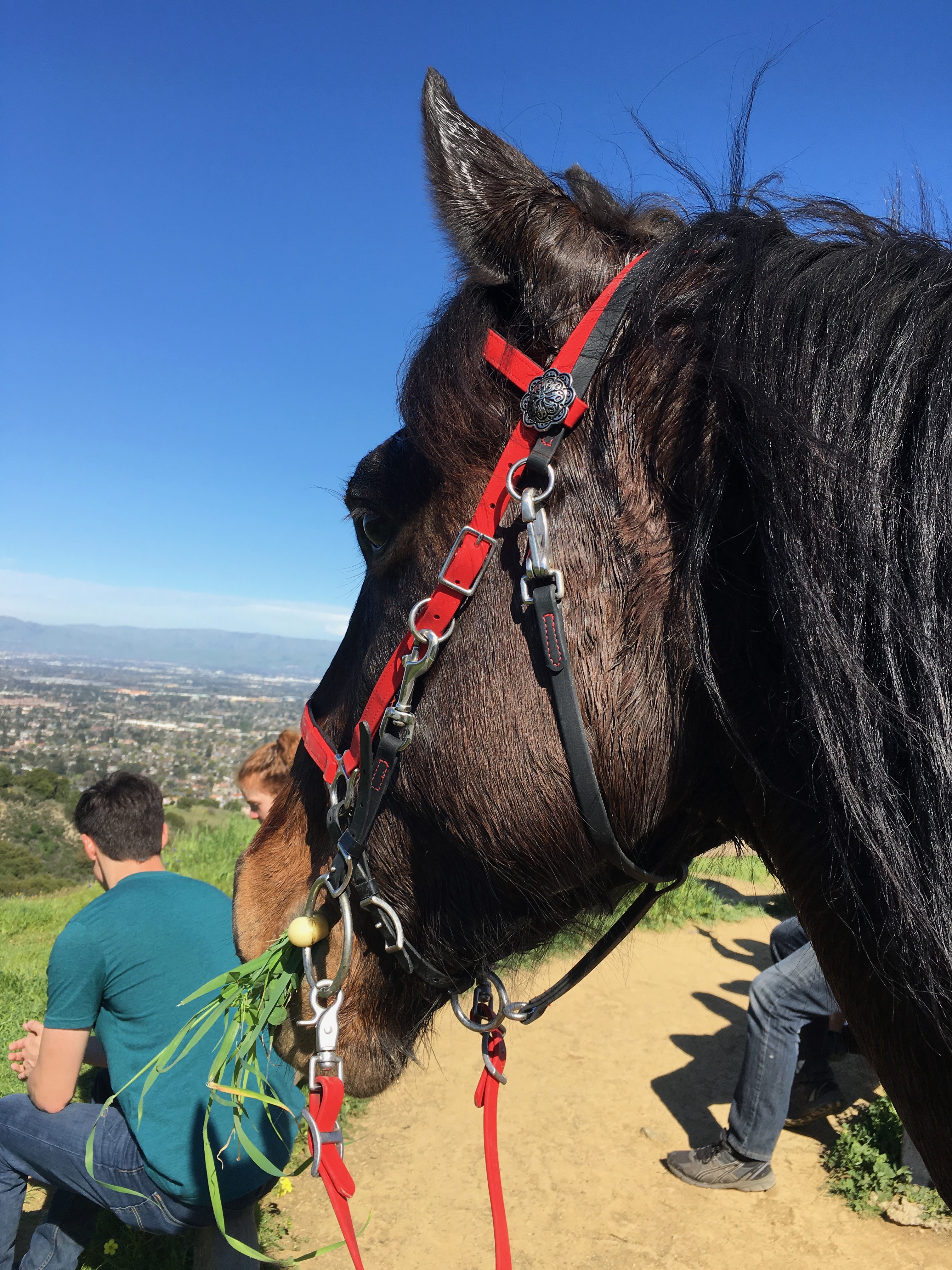 With that done, we turned around and made our way back to the trailer. Eugene was definitely getting tired by this time, and also thirsty. We had some stops at some puddles for him to drink out of, but Fremont Older unfortunately has basically no water accessible within the park, and today was hotter than I was hoping for. When I started the ride it was overcast and cloudy, but within the first 15 minutes the sun came out and it was pretty warm. Eugene was sweating by the time we finished the first hill and he was pretty well covered in salt and sweat marks by the end. 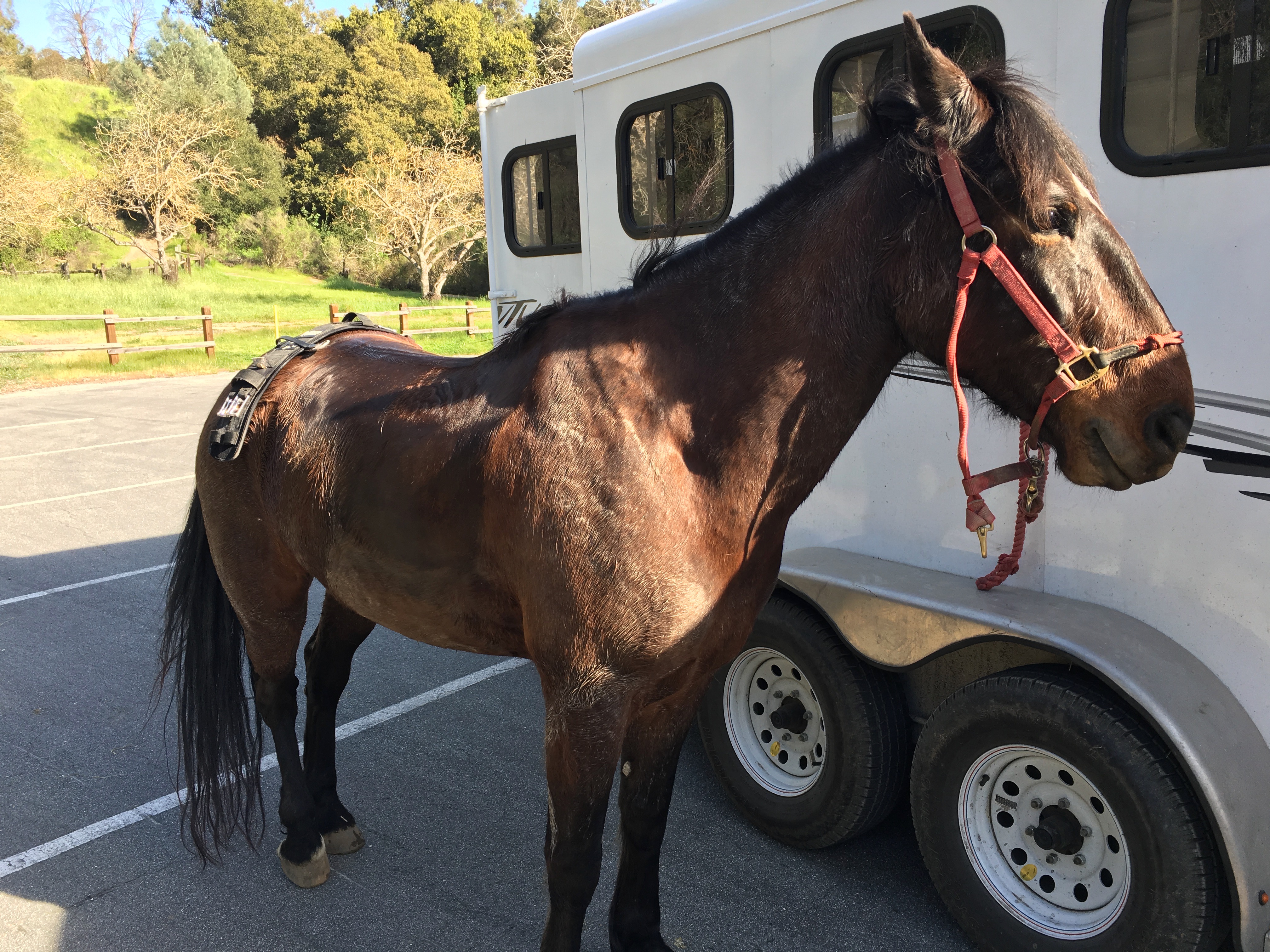 There’s a stream running near the parking lot, but the slope was too steep to get him down to. He could get his feet close to the water line but couldn’t then get his head far enough down to drink. Since that was out and the barn is only five minutes away, we just hopped back in the trailer and headed for home. 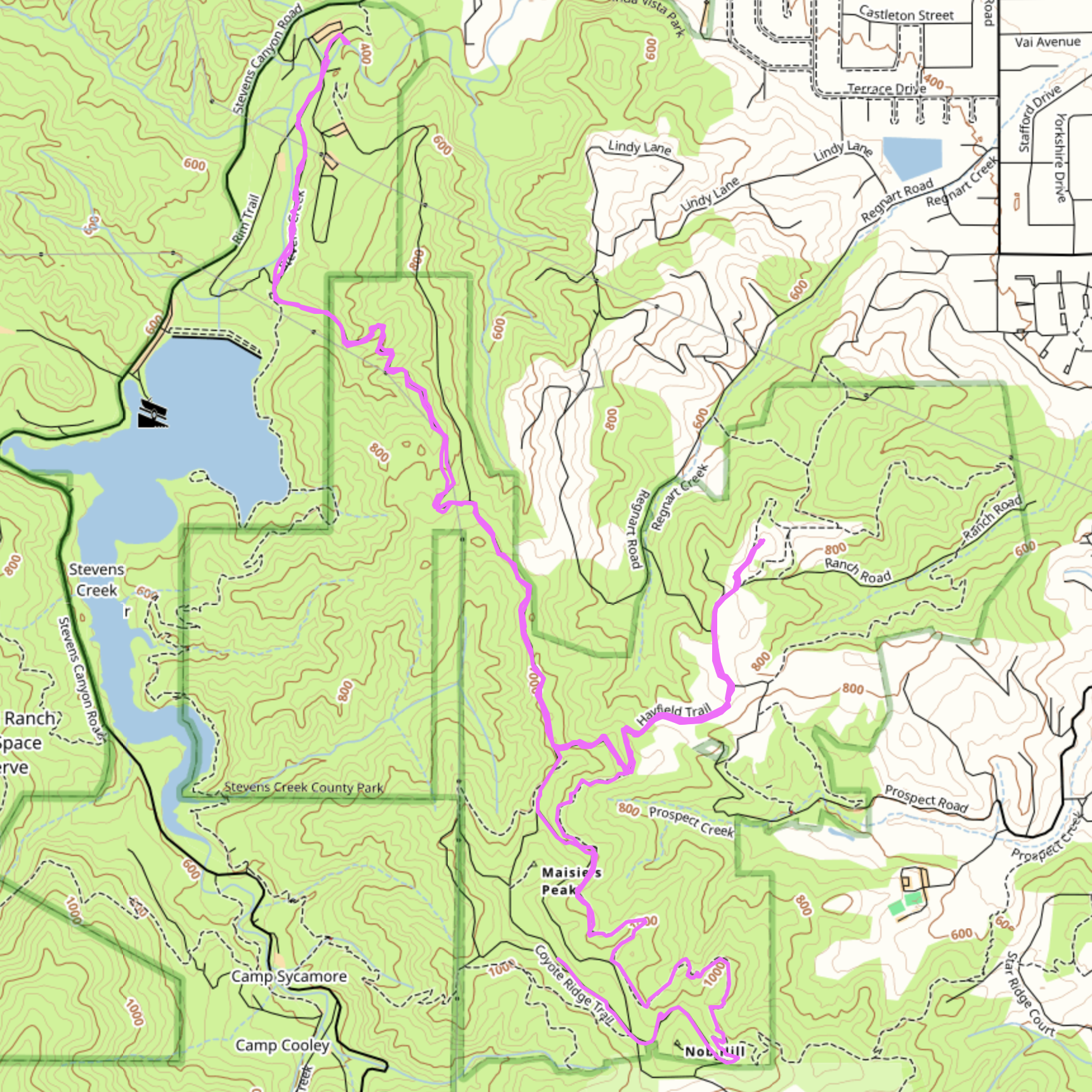 The GPS read 9.12 miles at the end, but it also cut out for about 20 minutes in the middle- which happened to coincide with a fairly flat section of a bunch of trotting, so I’m guessing the total mileage was just under 11. We’re definitely not ready for our endurance ride yet, but the only way to get there is to do as much of this as we can. Unfortunately, the weather report suggests that there’s more rain on the way this week, so we’ll have to just get in as much as we can whenever we can. For the first time in years, we can’t wait for the rain to be over. Even outside the annoyance of not riding, the evidence of trail damage is everywhere. 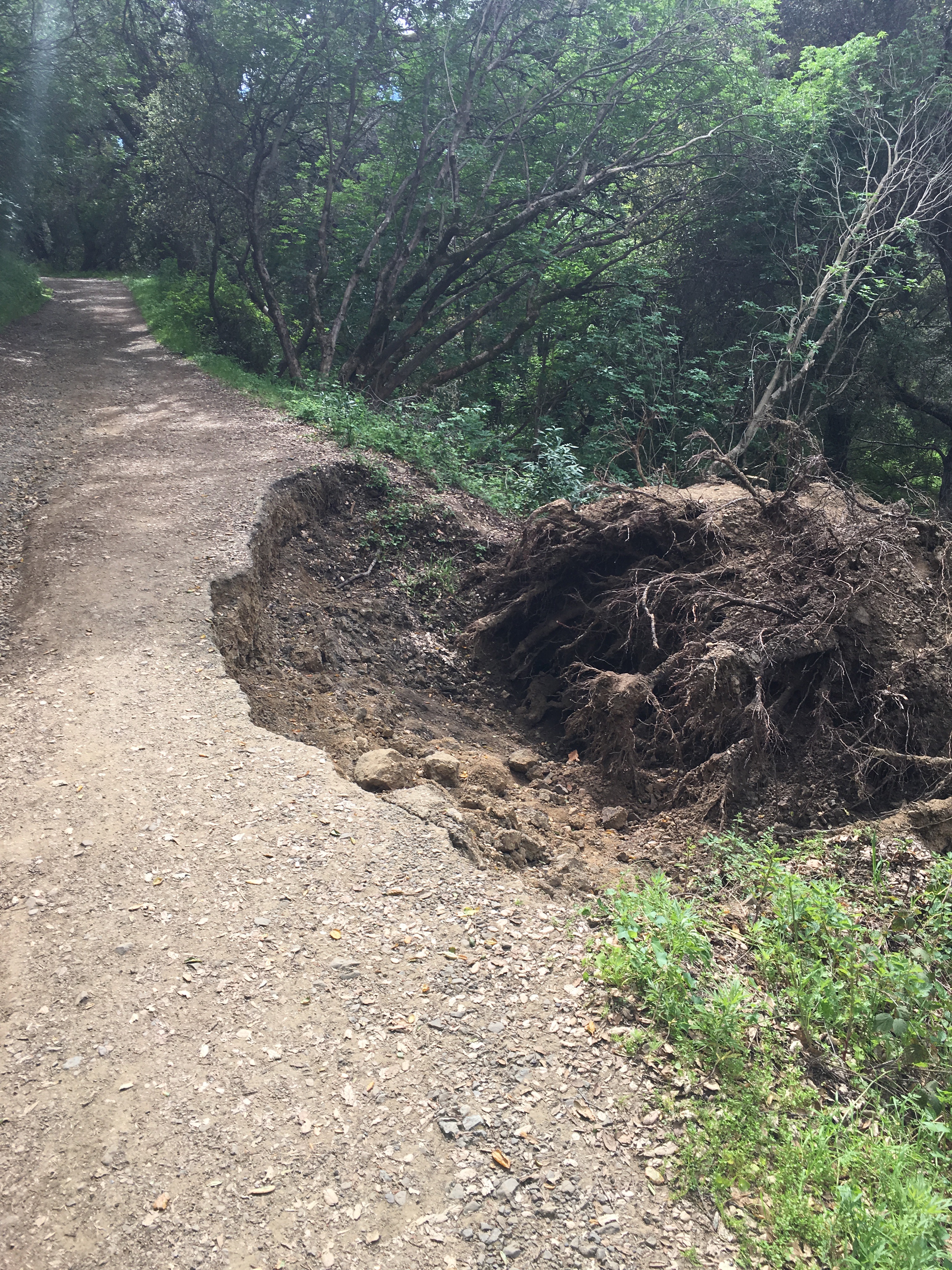 10 thoughts on “Getting Ready for Endurance”