I’ve actually been wanting to go to the beach for a while now. Because of traffic, it’s only really possible/practical to go in the winter and this year we’ve been swamped with all the rain and haven’t been able to get down there. Even for this weekend, we debated about going or not. Riders are only supposed to go during low tide and low tide was at 11am. Since that’s about when I like to wake up on weekends, that wasn’t going to happen. We were going to go trail riding instead, but almost all the parks in our area are either closed to equestrians right now or have trail closures that would make them less fun to ride at. My husband didn’t want to do Fremont back to back, so our options were to return to Calero, or go to Rancho again. I finally decided to say screw it, let’s just go to the beach. 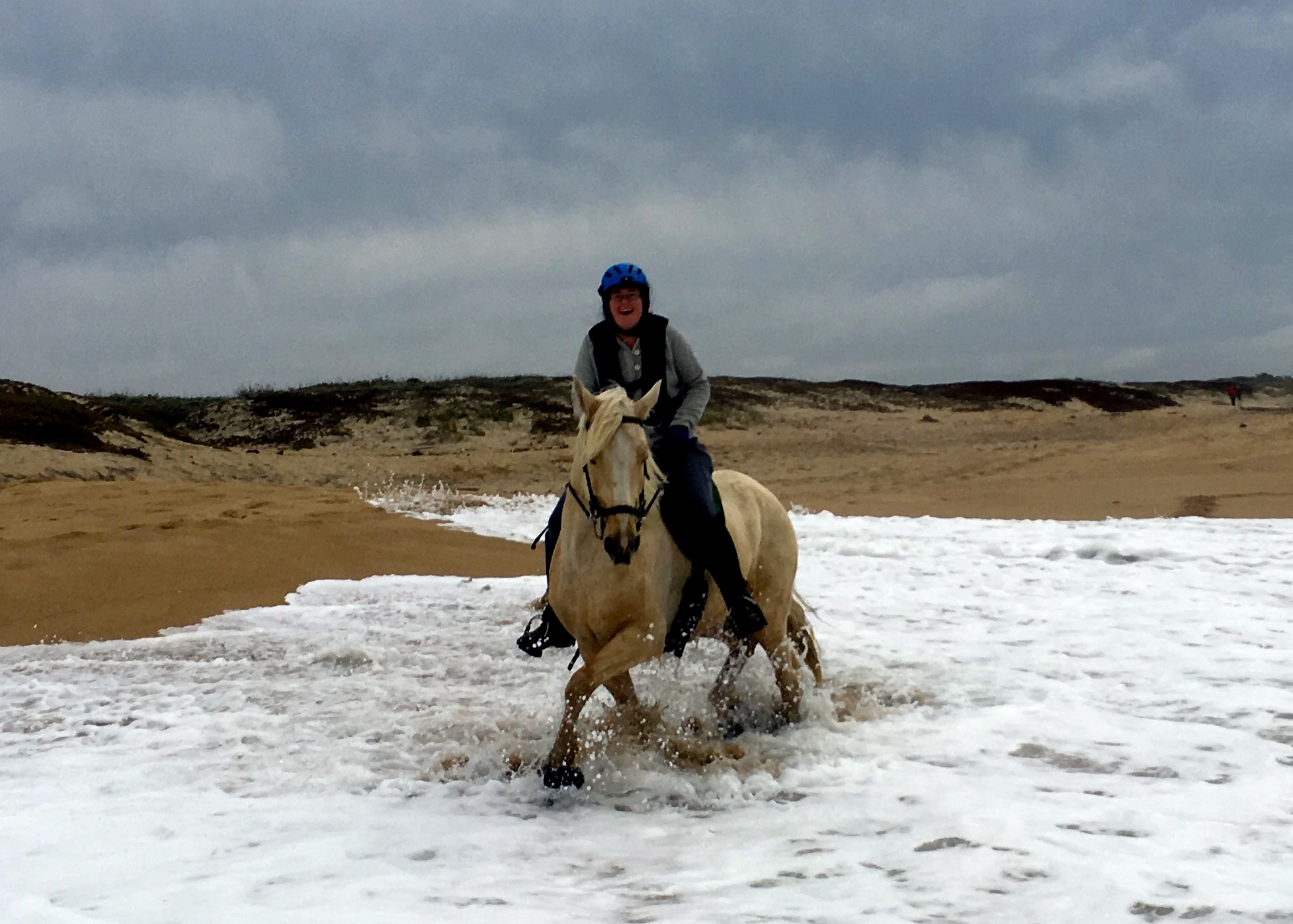 It was a really overcast day, which might not sound ideal for a beach day, but it’s actually perfect. The overcast skies kept the crowds away and we were able to have miles of beach almost entirely to ourselves. In the past, our horses have gone through varying stages of beach terror on their first visits. Nilla has been a few times now and still acts like the ocean is going to kill her. Add in screaming kids, kites, umbrellas, tents, fishermen (with poles that look like lunge whips), seals, and one time two men trying to shove a sting-ray back into the ocean with a piece of driftwood, and I’d say their fear isn’t unreasonable. 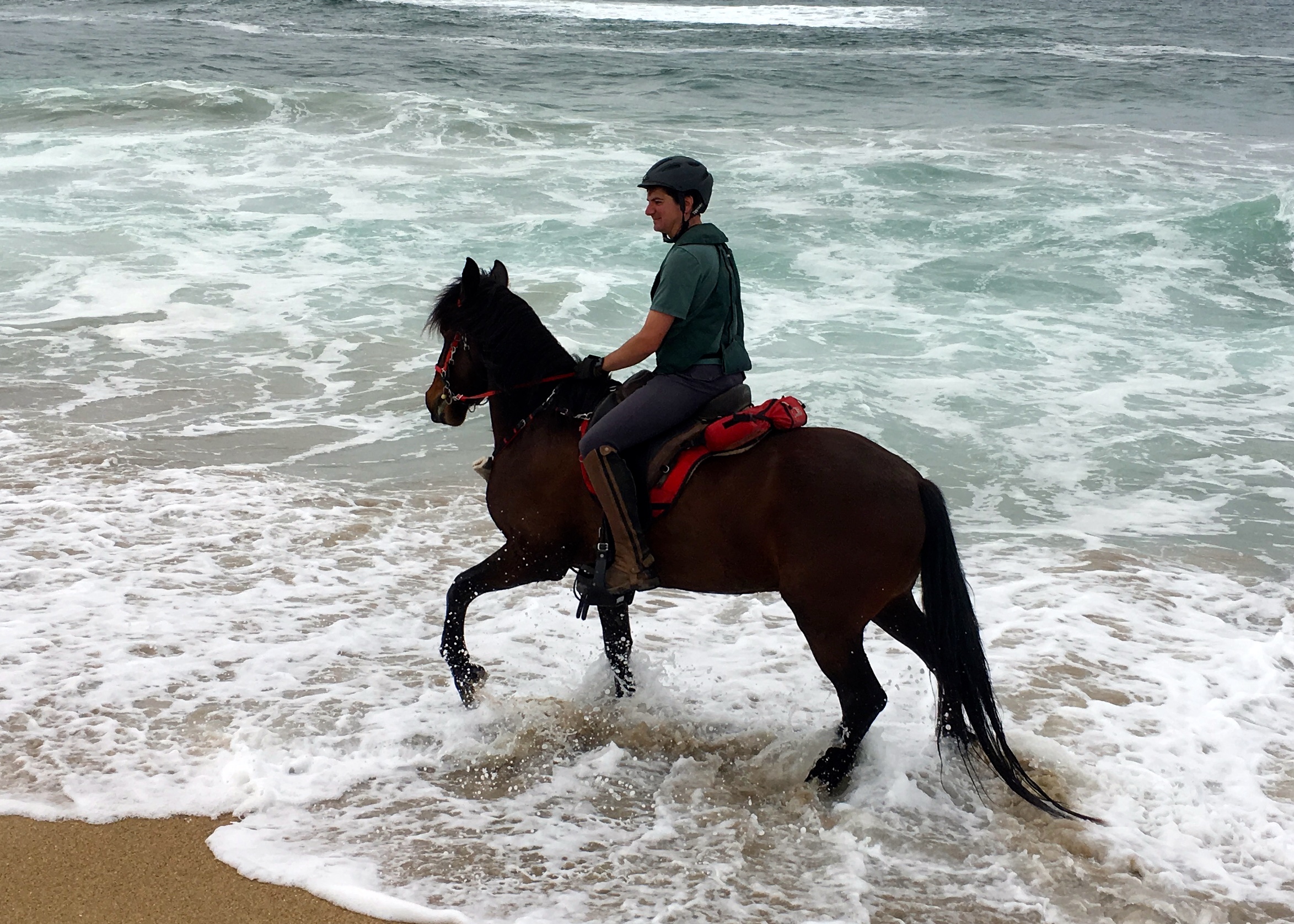 Given how previous beach trips have gone, I wasn’t sure how Levi would take it. He did, after all, spend the first 6 years of his life living in a holding pen. But his general approach to everything so far has been good so I thought we might actually have fun.

When we arrived, we spotted a large group of horses heading out from the parking lot on a guided ride. I was a bit concerned about that as Levi’s most freaked out reactions so far have been to the existence of other horses. They don’t even need to be doing anything; they just need to be in his sphere of knowledge and his brain leaks out of his ears. We took the trail through the dunes to get to the beach instead of heading straight to the beach to avoid that group and give them a chance to stretch their legs and calm down before we saw the ocean.

Levi was a little looky at the ocean, but not actually that worried. Until I tried to get him to go near the water and then he was all “no touchy.”

That was it though. Just a lot of lateral movement and snorting. And he doesn’t like to touch his feet in mud or streams or shadows or anything really so I don’t even think it was the ocean that worried him so much as it was just a change of footing. 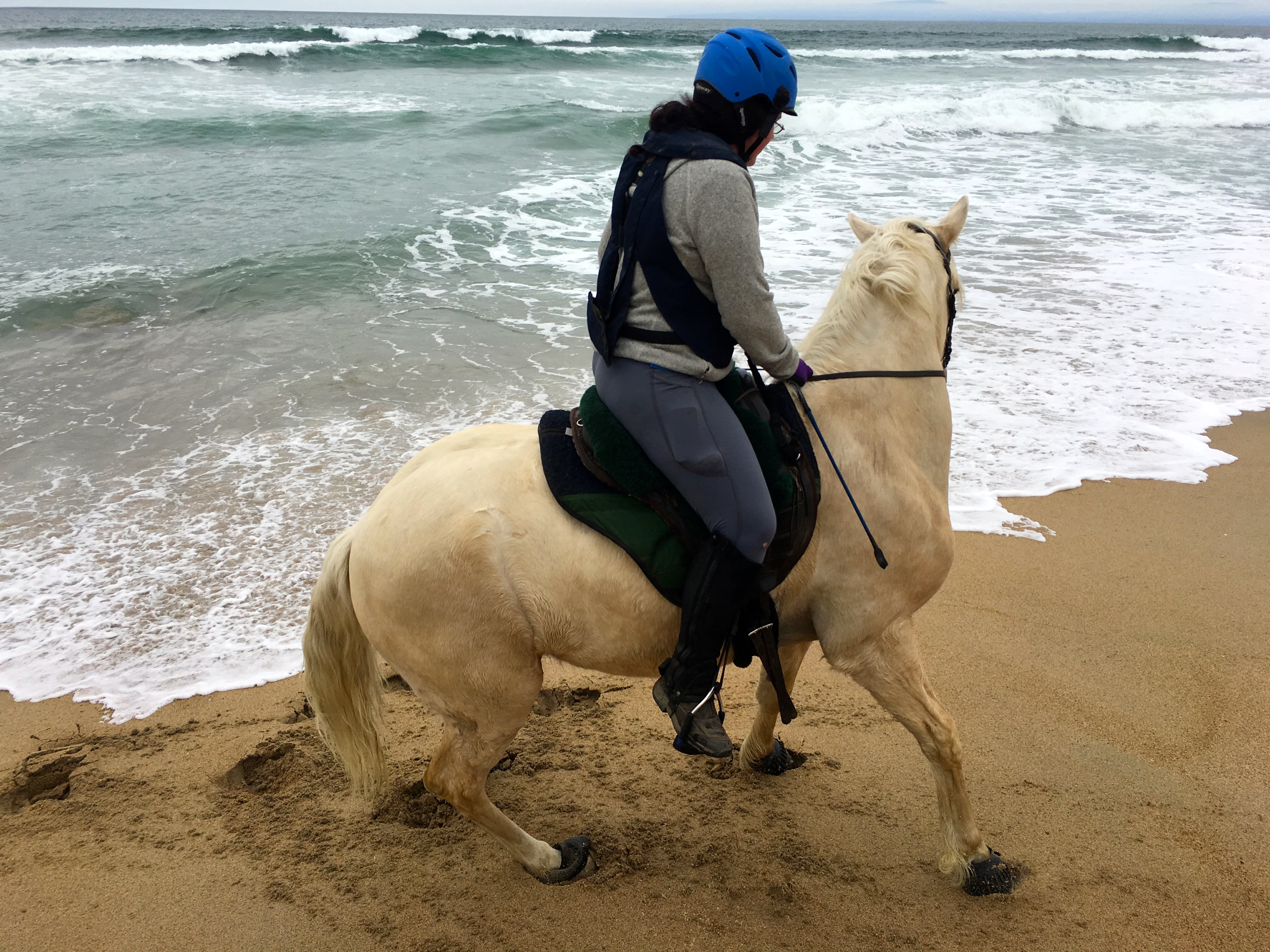 Eugene actually loves water and since this was his second time at the beach, he wasn’t as concerned and my husband actually had to worry more about him trying to drink the surf rather than spook at it. 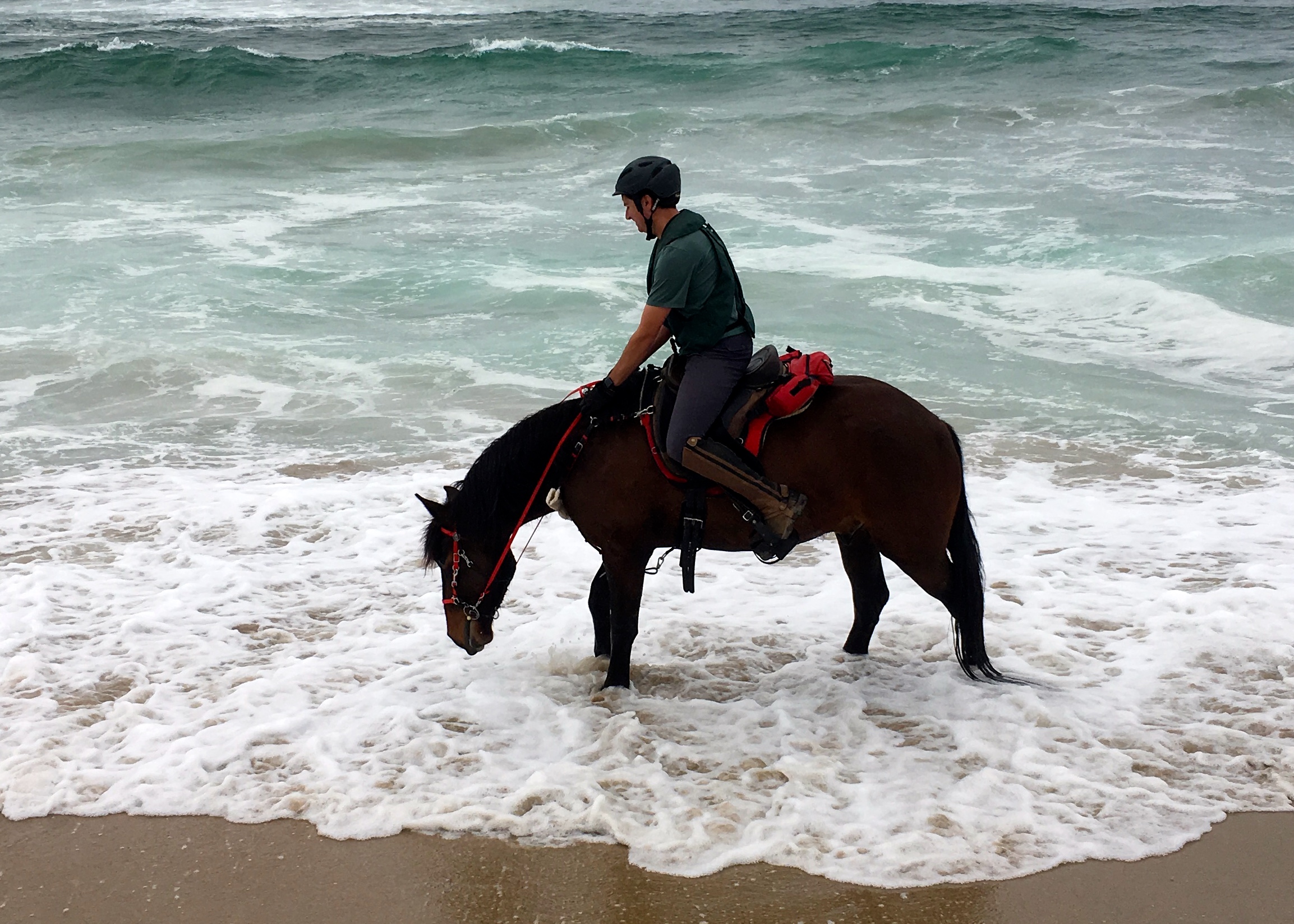 Because the tide was coming in, we would occasionally get hit by a bigger wave than anticipated. This actually worked out really well for me as it forced Levi to deal with the water touching him. And my husband got some amazing shots.

Levi was so good at the beach. Even when we got unexpectedly splashed. #blmmustang #beachride #horsesofinstagram #horsenation

My husband, on the other hand, was so much closer to the water that he ended up getting splashed pretty hard by a larger than anticipated wave. 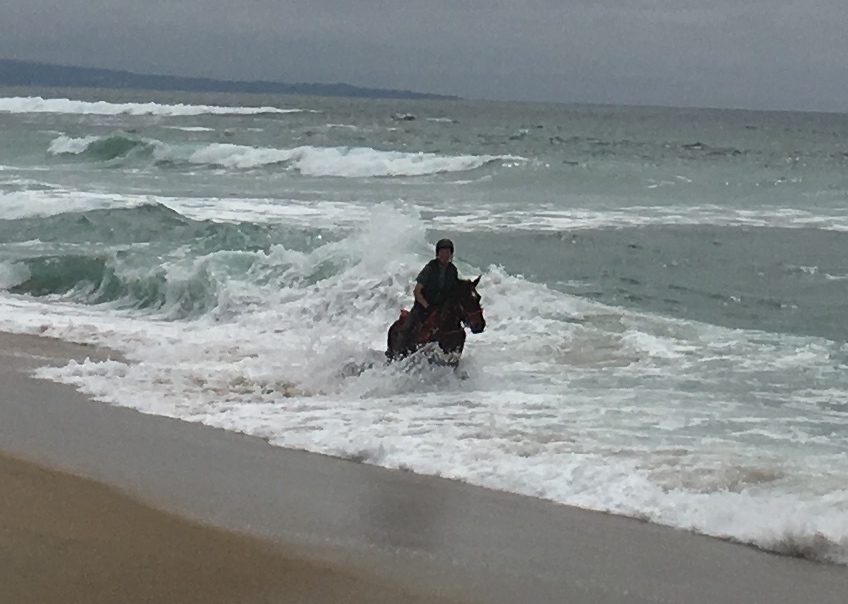 After that we left the water to head back the trailer. Of course, you can’t take eventers anywhere without them finding things to jump.

I even got Levi to jump up a bank, but this picture is a perfect illustration of why you shouldn’t try to jump in a treeless saddle; it just slides right back. 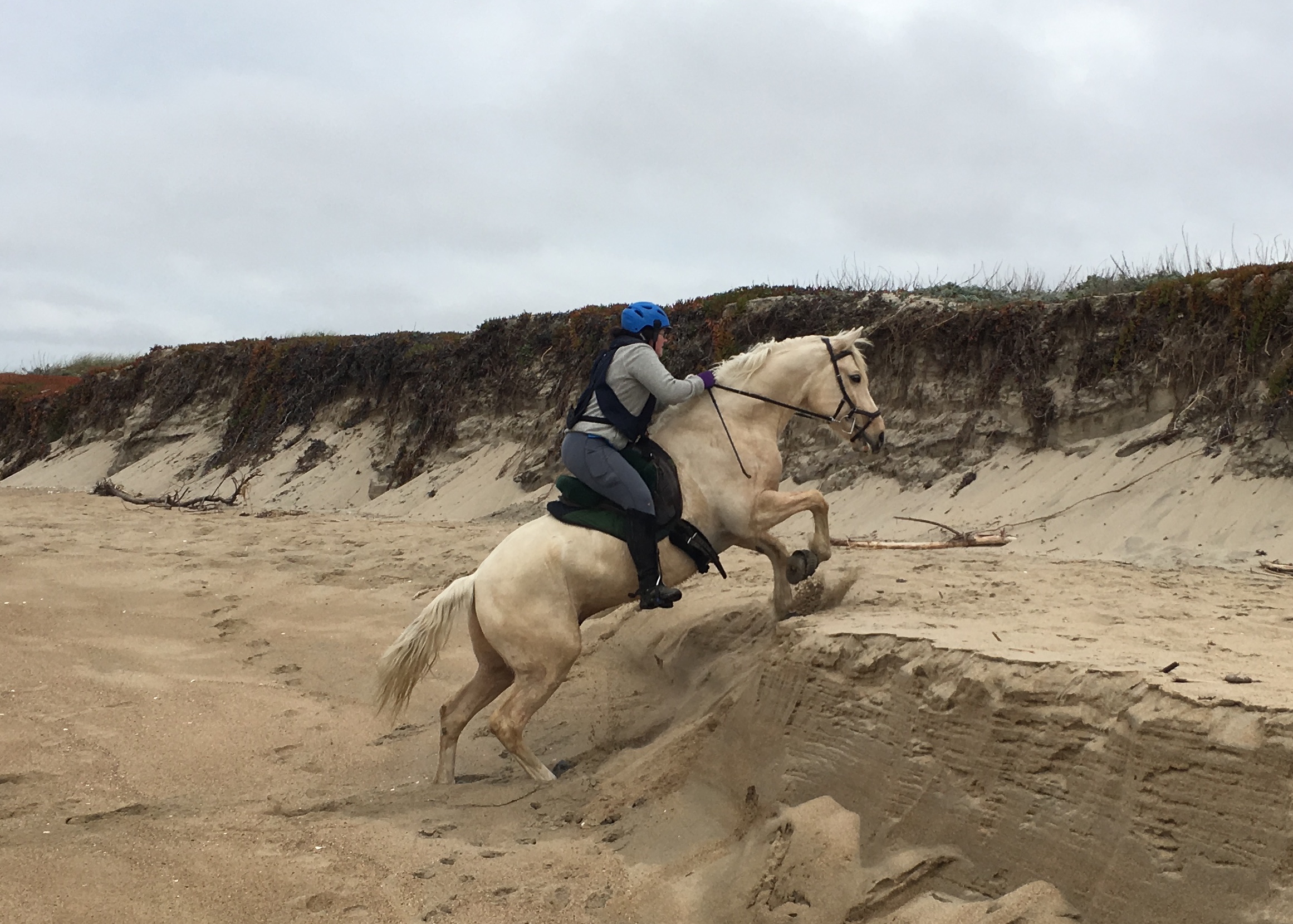 It was a lot of fun though and you can see from his little ears how happy he was. He was such a good boy. We even met other horses and Levi was super super interested, but did not freak out. Even when a mare in heat was screaming to him, his brain remained in his head. 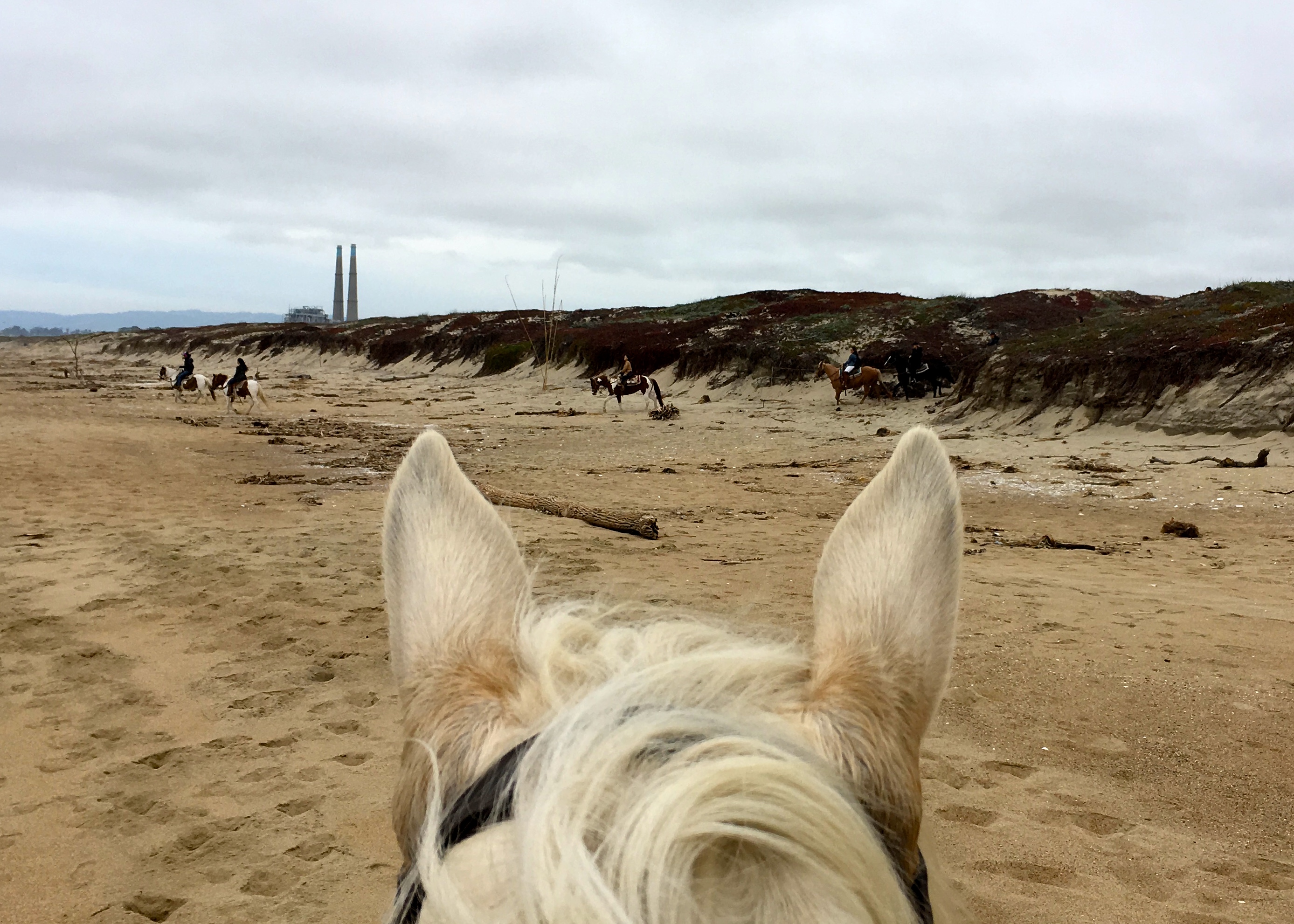 This is the first time I’ve been to the beach with any of my equines where I didn’t have to get off to deal with a freaked out horse/mule. It was so nice to just enjoy riding on the beach.

Once we got back to the trailer, we stripped their tack and walked them back to the beach entrance  to roll. Levi was so excited that he was nose down and looking to roll even as we were walking across the asphalt. He just didn’t want to wait. Once we hit sand, he rolled a ton. He just kept rolling, getting up, rolling again, mushing various body parts into the sand, getting up, rolling in a new spot, and just absolutely loving it. At one point, he just lay there,sniffing the sand. I may have to get a sand pit for his paddock as well.

Eugene actually had to walk around sniffing and circling a bit before finally deciding to roll. There was a small crowd of onlooking watching and asking questions about the horses so he might have been distracted, but he got in a few good rolls before deciding he was done. I actually just had to take Levi away. He would have kept on rolling if I’d let him. 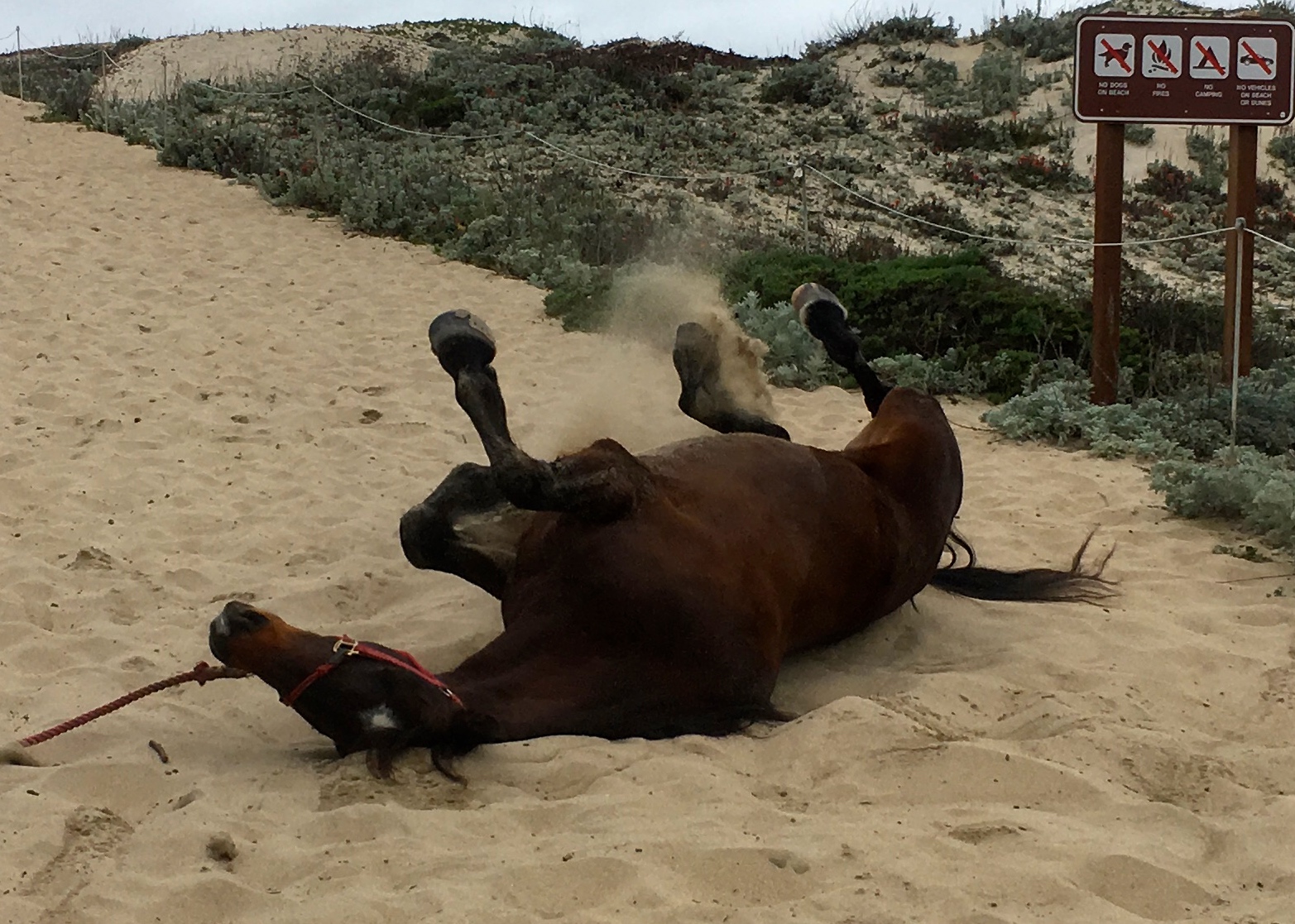 I don’t know when we’ll be able to get back again, but I can’t wait.