Since it’s finally stopped raining here in California, we were able to get out for a trail ride. Our original plan was to go to Harvey Bear, but it was closed to equestrians. We didn’t know that because the website just said it was closed to boats. So we drove all the way there, offloaded, proceeded to tack up and only as we were about to head out on the trails did we see the sign saying it was closed. Since we were at the upper parking lot, we though the lower trails might be open and drove down there.

Sadly, the dirt trails were all closed, but a ranger in the parking lot told us we could ride alongside the paved loop. Well, we drove all that way and the horses were still tacked up, so figured why not. After spooking violently as a family walking slowly and doing nothing weird, we proceeded to do the little 2 mile loop. Of course, it’s completely flat and basically just loops around a cow pasture so it’s pretty boring too. 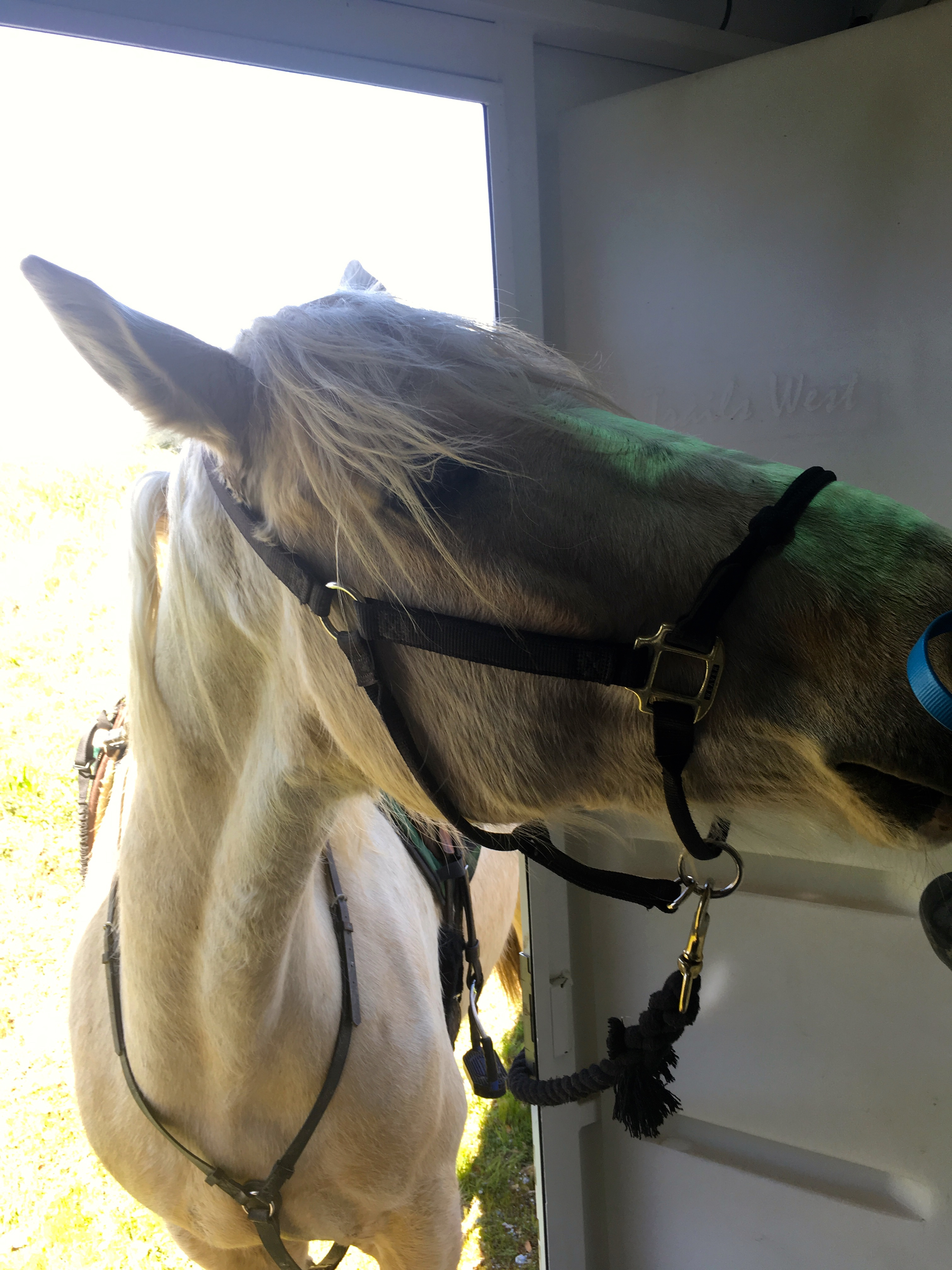 We called the park trail hotline and found out that Calero was open and it was only 20 minutes away. We loaded the ponies back up, drove over, and the third time was the charm, we finally got to go on a trail ride. The last time we rode at Calero, we had Dijon and Shasta and since Dijon can’t do much we did a short ride. Neither my husband or I had realized just how big the park actually was.

The last time we were here, California was suffering through the drought that has plagued us for the last few years and the reservoir was really low. This time we got to see it actually filled with water, which is both much prettier and much less distressing. 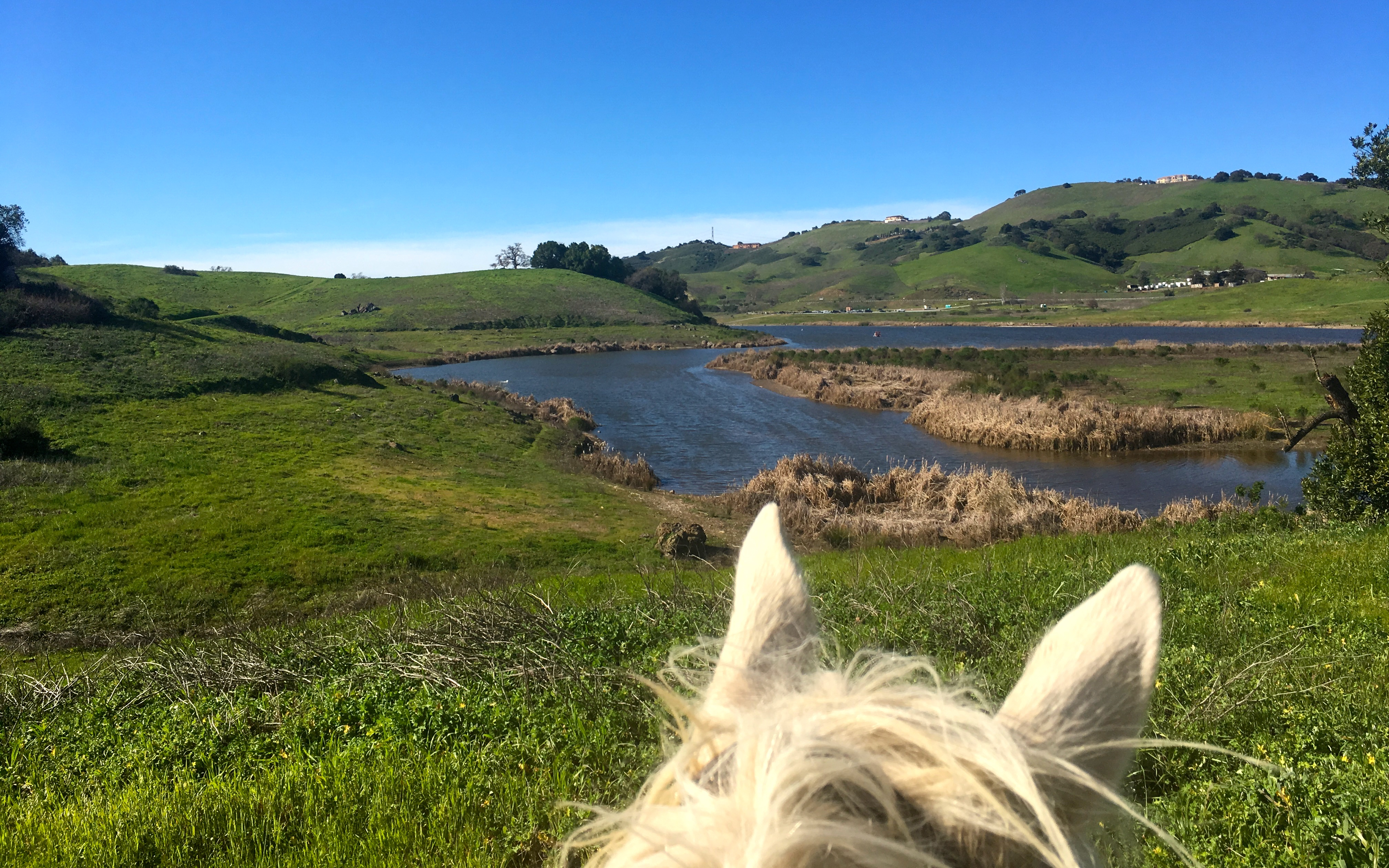 We started out on the same route we’d taken with Dijon last time and I remembered that being really short and easy so we decided to do an outer loop this time. We rode past the bat inn and at this point Levi saw other horses on the trail, which apparently caused his brain to leak right out of his ears. The riders were just walking and they even topped to ask if we were okay, but the mere existence of other horses was just incomprehensible to Levi. I had to get off and wait for them to pass us while Levi screamed his head off. And all of this with Eugene still standing there. At no point was Levi actually alone, but he still lost his mind. He is, by far, the most herd bound horse I have ever owned and I truly do not know how we’re ever going to get through an endurance ride. 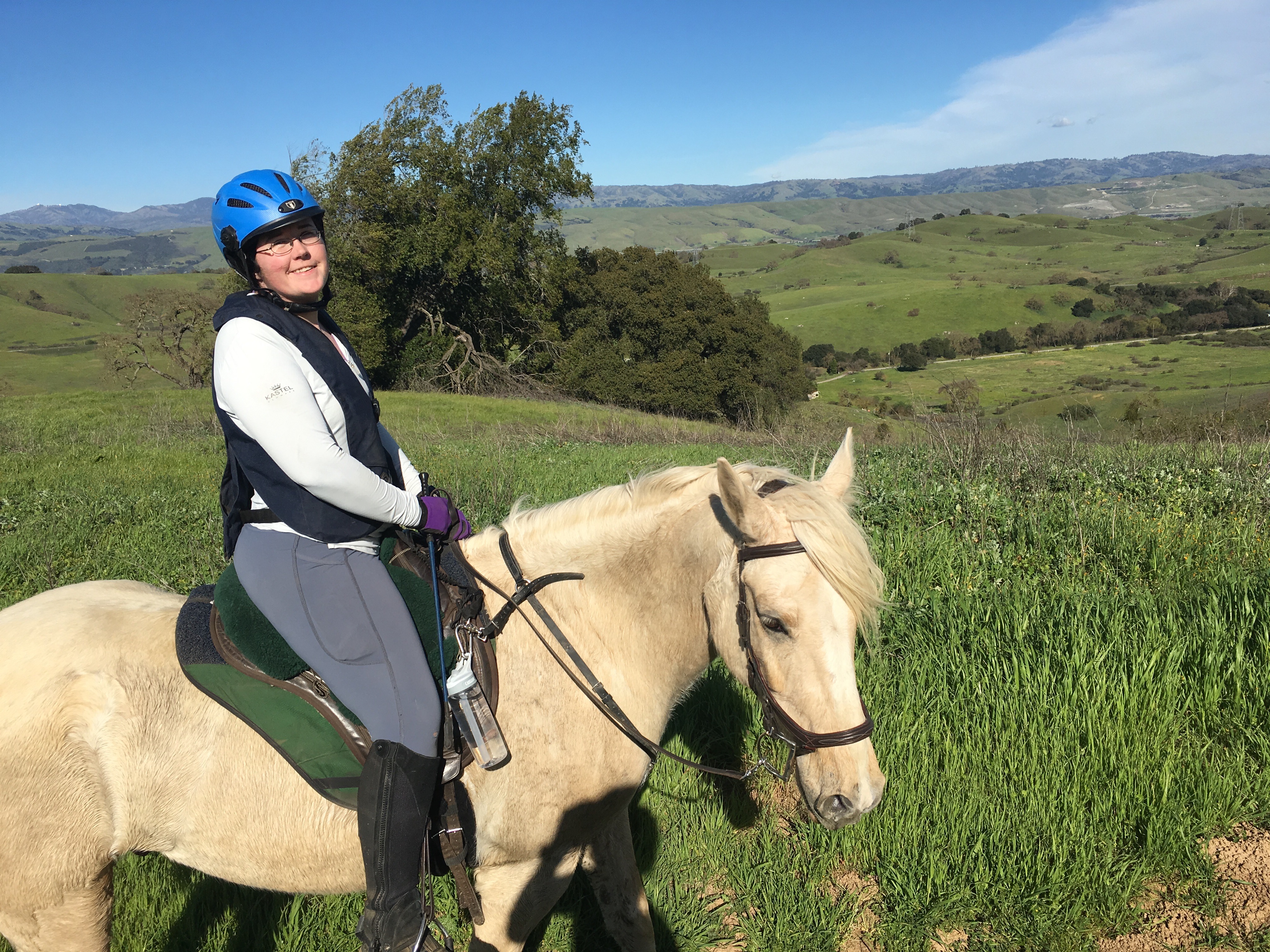 To go along with all the water in the reservoir, all the creeks and trails were flowing with water as well. Most of the footing was good, but a few parts of what should have been trail had water flowing along it or mud. We got in some good trots and canters, but mostly walked. The water was very welcome since it was pretty hot and the ponies were quite sweaty. It was also great practice for Levi who still thinks water is to be avoided. By the end of the ride, he was not only crossing the water calmly, but even drinking from it and splashing in it. 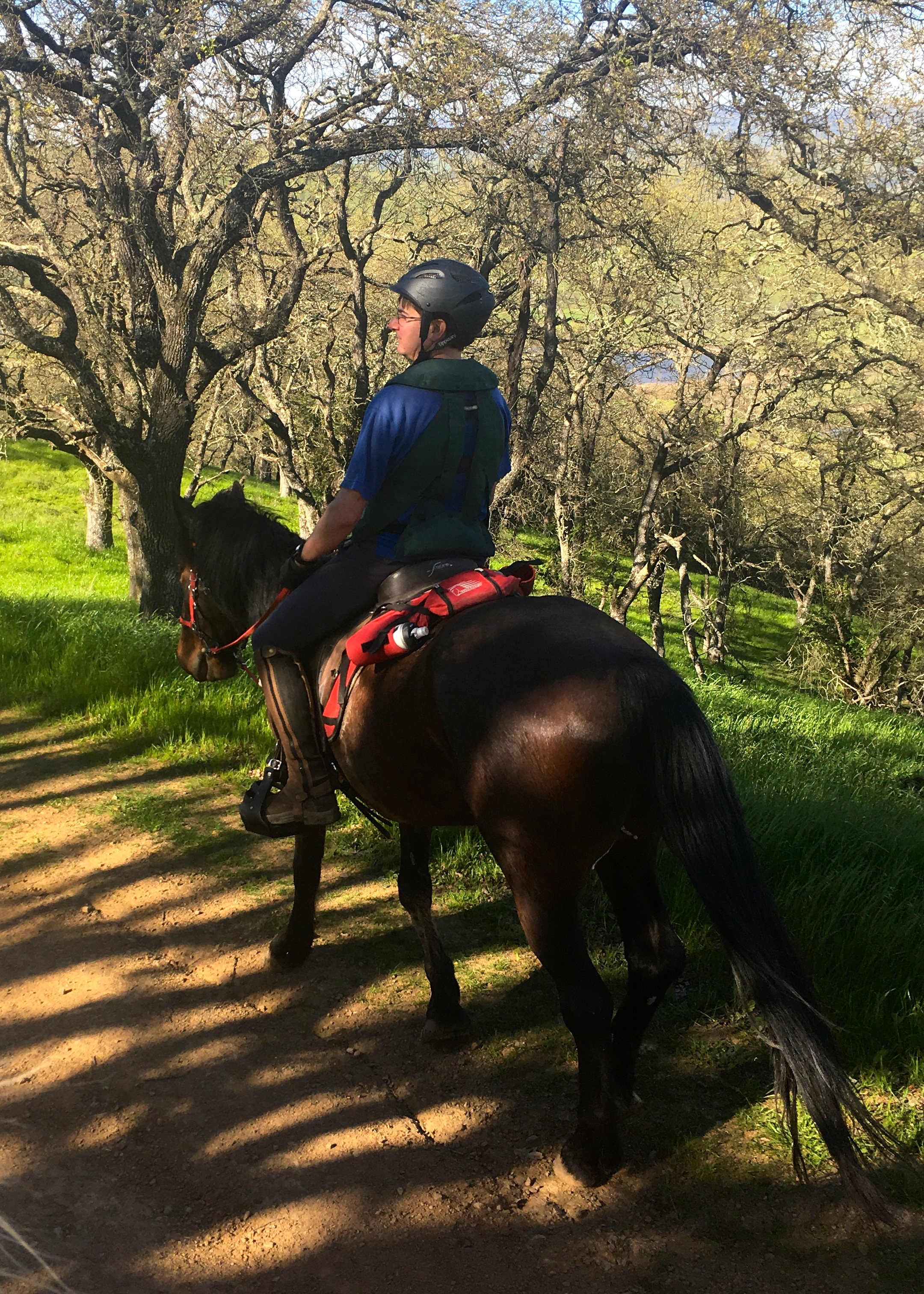 As we carried on along the trail, we began to wonder where the hell we were. The park is well marked, but we seemed to be going further and further away from the trailer. And it was getting pretty late. And we were going up hill. At one point we found a hiker and confirmed that we were on the right trail, it was just a much longer and hillier trail than we’d anticipated.

Long shadows on a much longer than originally anticipated trail ride. Gorgeous day to be out in the hills. #blmmustang #shadowselfie #trailride

The sun was getting low in the sky and we were still miles from the parking lot. With mostly downhill left to go we weren’t able to make great time, but we hustled when we could. I added an arrow to this picture showing where the reservoir is. Our trailer is parked off to the right behind the hills. 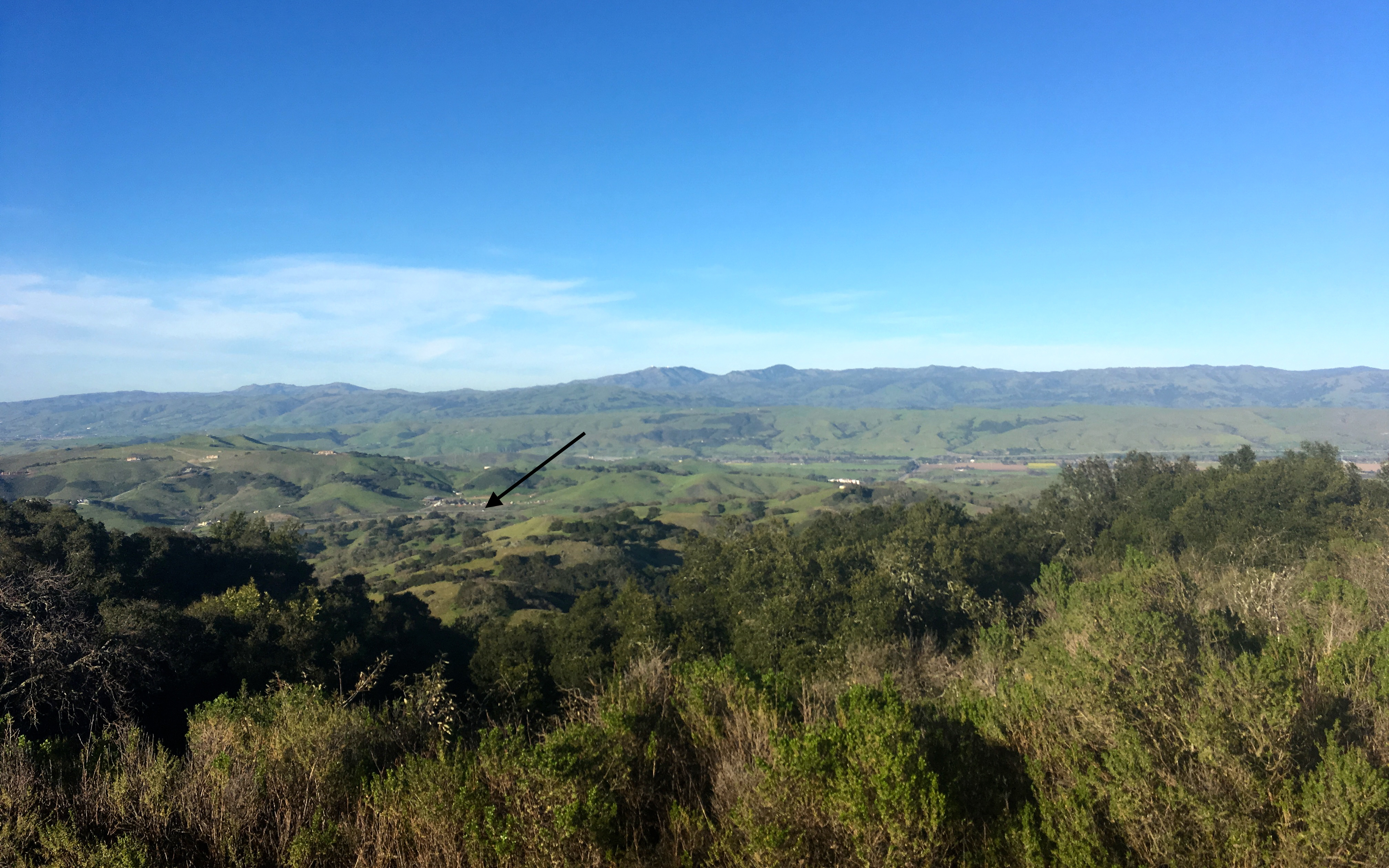 At one point we hit a really steep downhill section. It was so steep even my husband dismounted and we slowly picked our way down the hill skidding a bit as we went. These California hills can be brutal. And Levi is still building the muscles to do downhills so we’re super slow even on nice rolling hills. 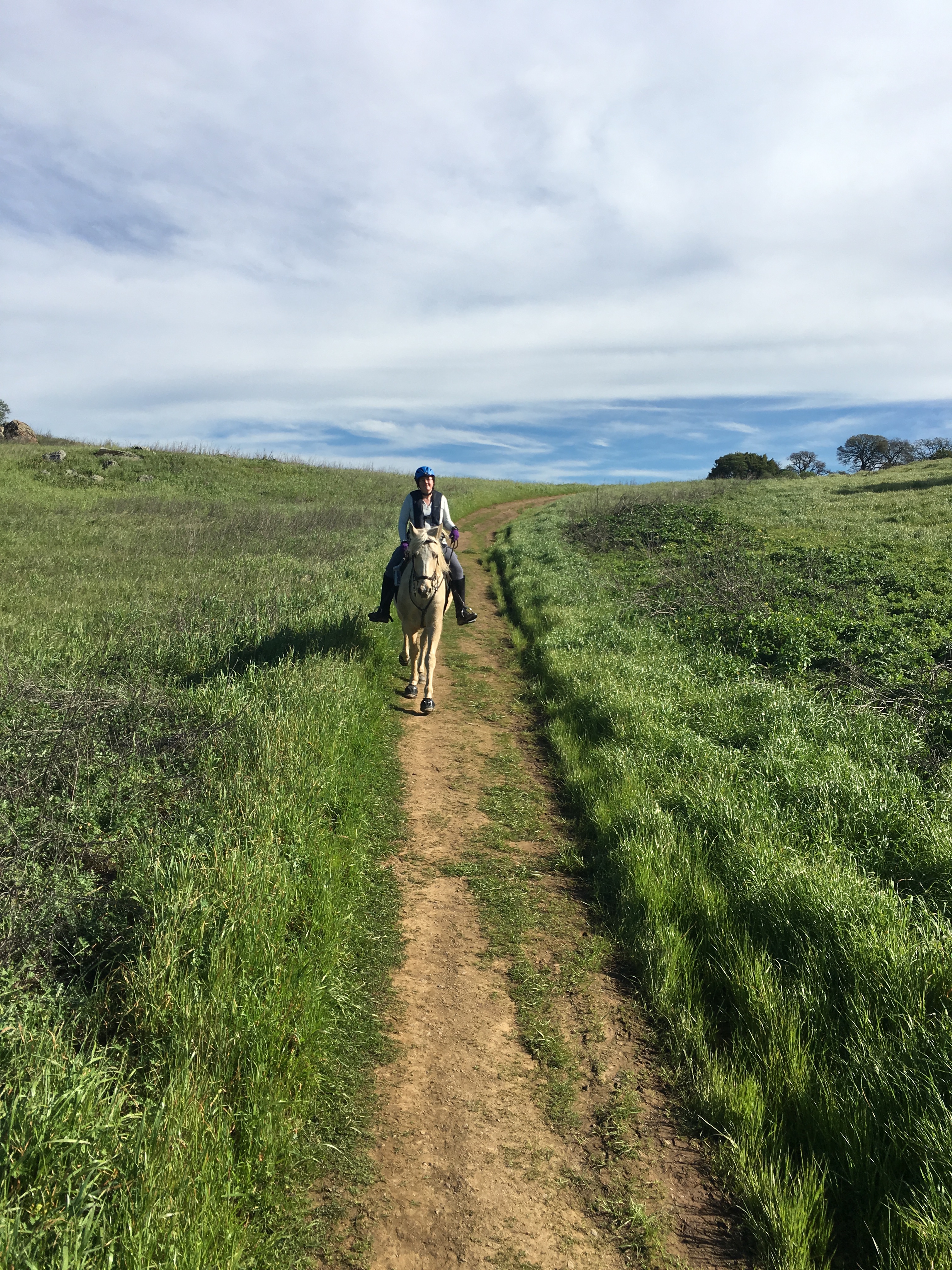 We finally reached the base of the hill and made some good time trotting along the flat sections. We managed to make it back to our trailer before sunset (which was especially important as the park closes at sunset), but we didn’t get back to the barn until after dark. Thankfully there was a nearly full moon to see by as we unloaded and fed the horses in the dark (there are times I really wish we had electricity at our barn).

It was a great ride and hopefully we’ll return to Calero again with enough time to fully explore the park.