Breakfast was bright and early at 7am. We had to have our gear packed up and at the corral before breakfast so we were on the mules and on our way back to the bridge before 8am. The mules go down on the Bright Angel Trail and return on the Kaibab trail. The Kaibab is only 7 miles instead of 10, but it still covers the same elevation so this was a tough climb. We went back over the same bridge and I grabbed a selfie: 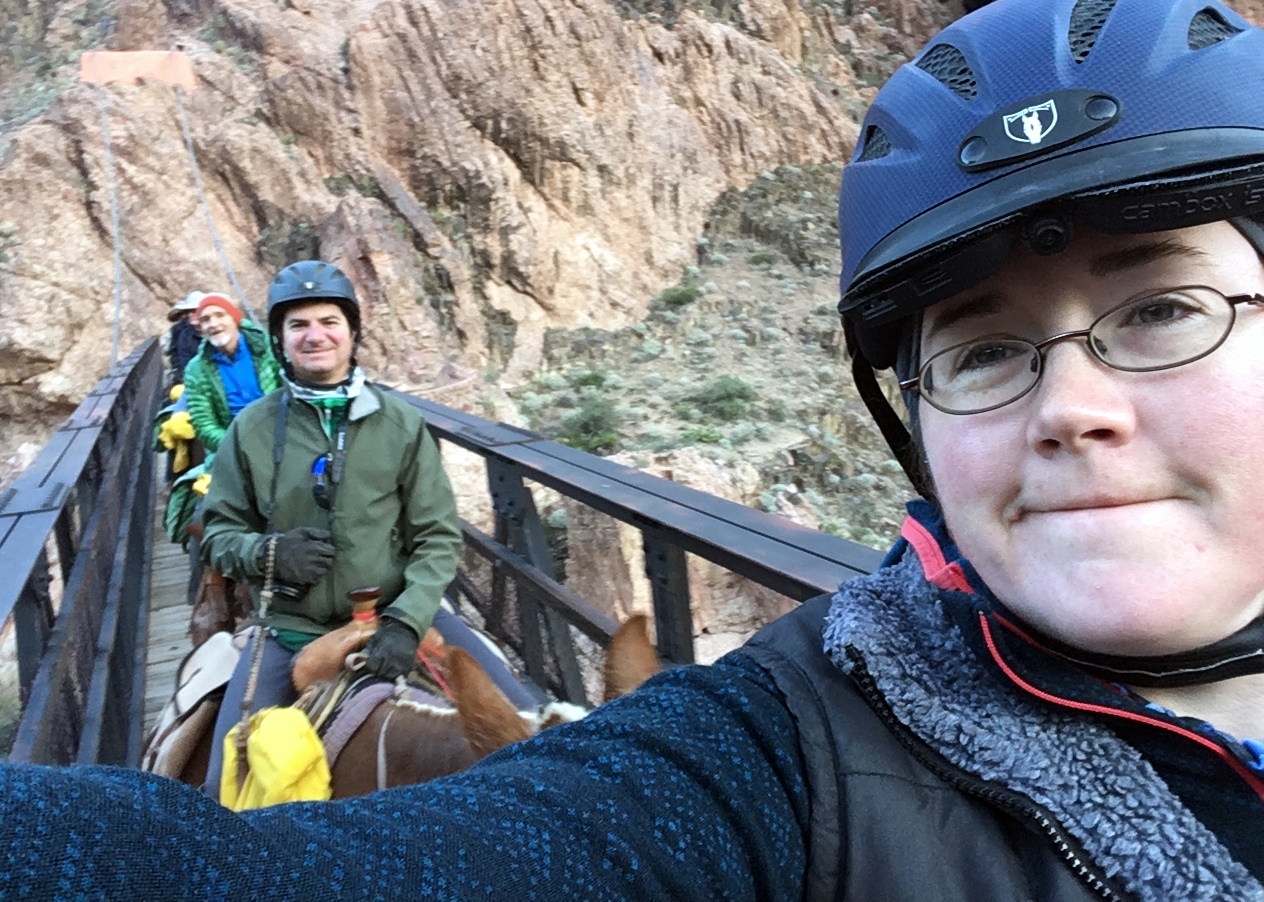 I will say this bridge is not for the faint of heart. It’s very high up and the rails only come to about saddle high. I wasn’t bothered, but if you have a fear of heights, this is not for you.

As we began our climb, we passed the pack mule train coming down. They go down to Phantom Ranch, drop off supplies and then pack out trash and duffles for hikers all in one day. Our guides said those guys are up and getting things packed staring in the wee hours of the morning. By the time we saw them it was only 8:30 and they’d already loaded everything and done 6 miles. 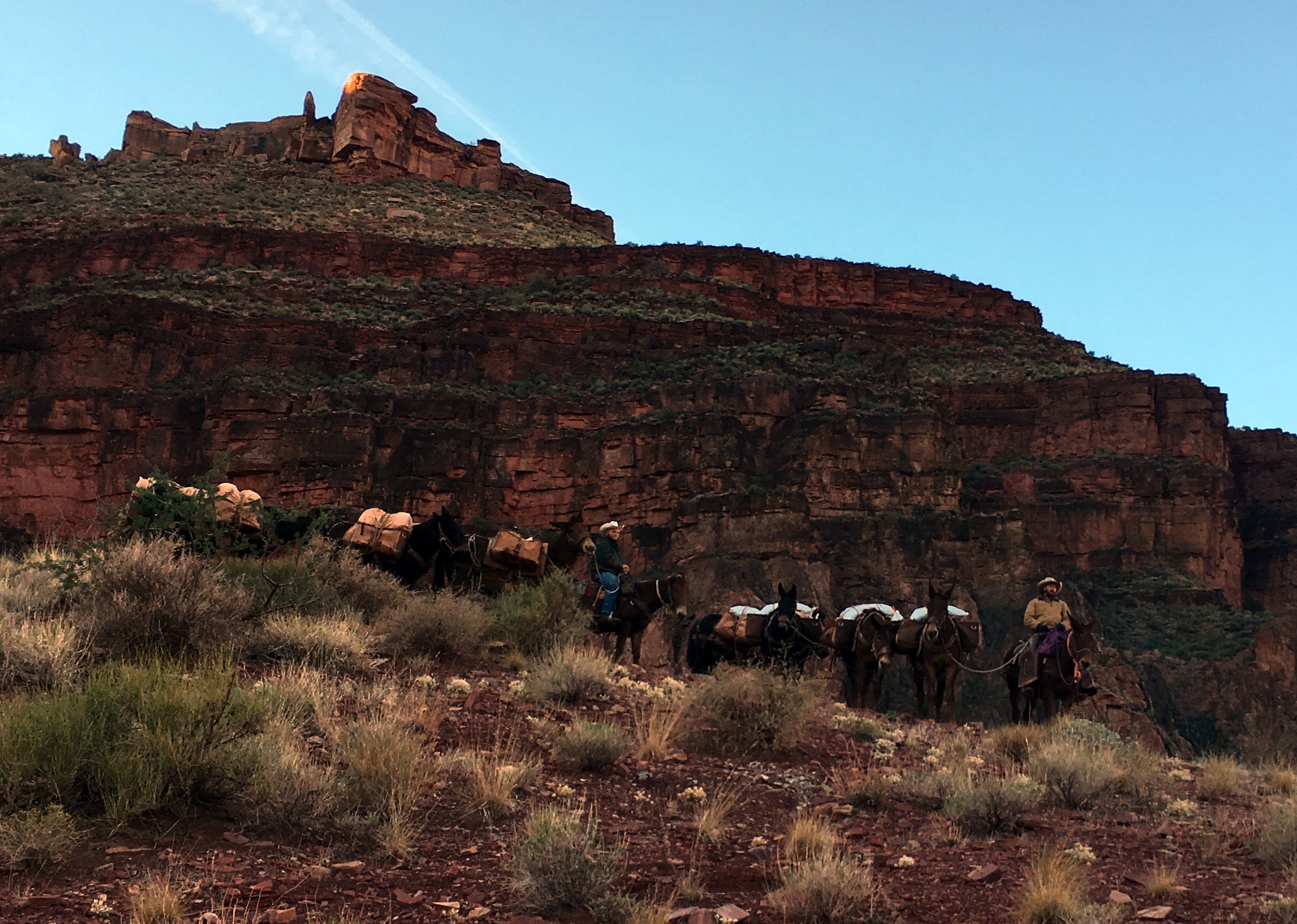 The Kaibab trail is not only steeper, but there are many more of the steep drop offs alongside the trail. I still wasn’t bothered by them, but I could see people with a fear of heights finding this ride a lot harder than the previous day’s. 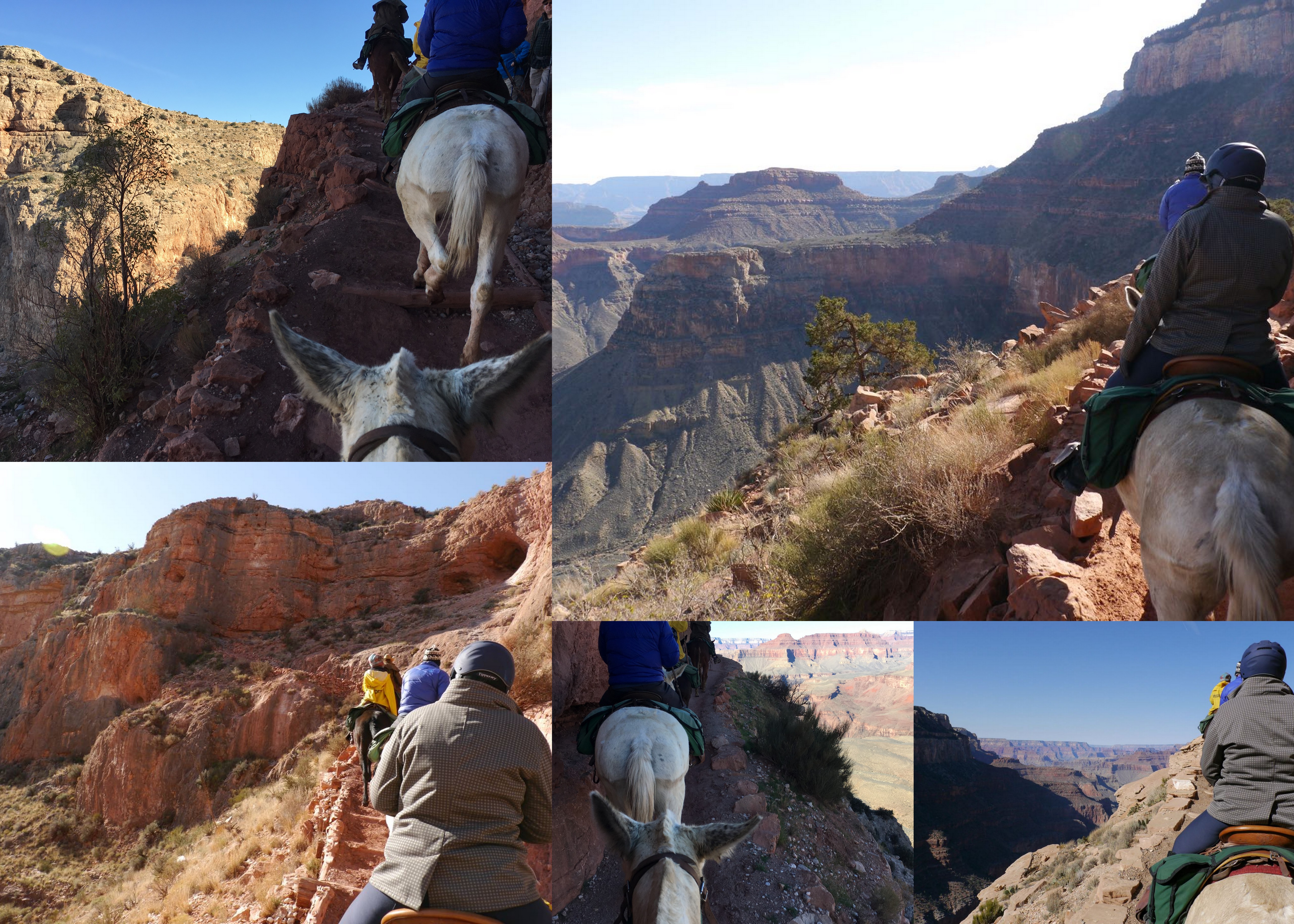 There weren’t any lunch breaks on this day because we would get to the top by 1pm, but we did have two bathroom breaks. At the first one the guides took pictures of us before we got off. 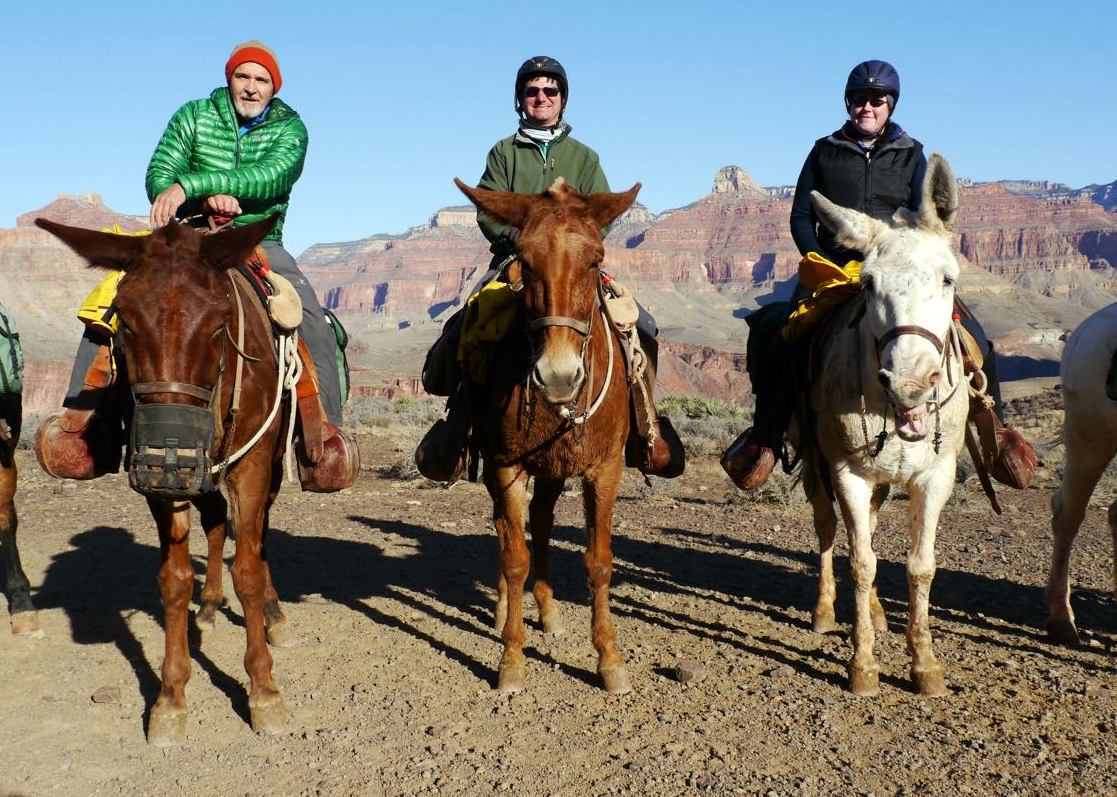 At the second stop, we ate some snacks we’d packed away and huddled behind a rock trying to stay out of the wind. It just kept getting colder and colder. The top half of this trail was also really crowded. Because this trail has better views, a lot of day hikers walk just a few miles down. And the holiday had the park packed. All the hikers have to move out of the way of the mules, but it was still pretty hectic. At the end of the Kaibab, we faced what looks like a solid cliff from a distance. It’s really only because of the hikers that you can even tell there’s a trail carved in there. 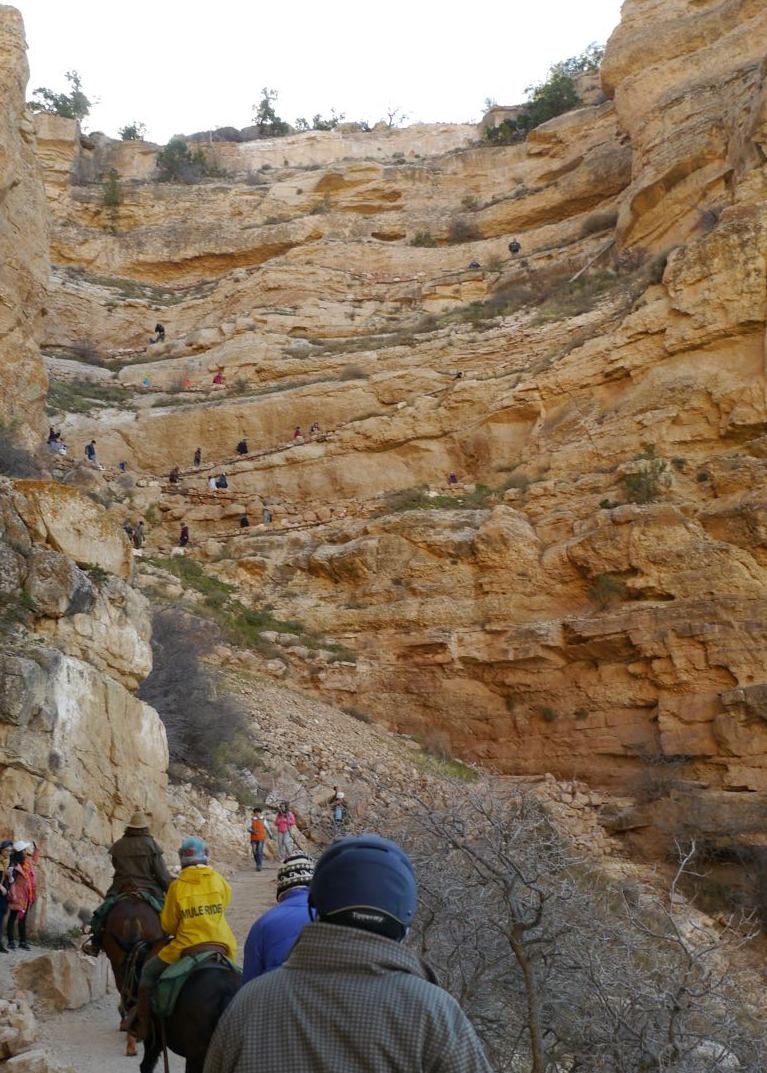 Here’s the same trail from about half way up looking down. It’s pretty intense. 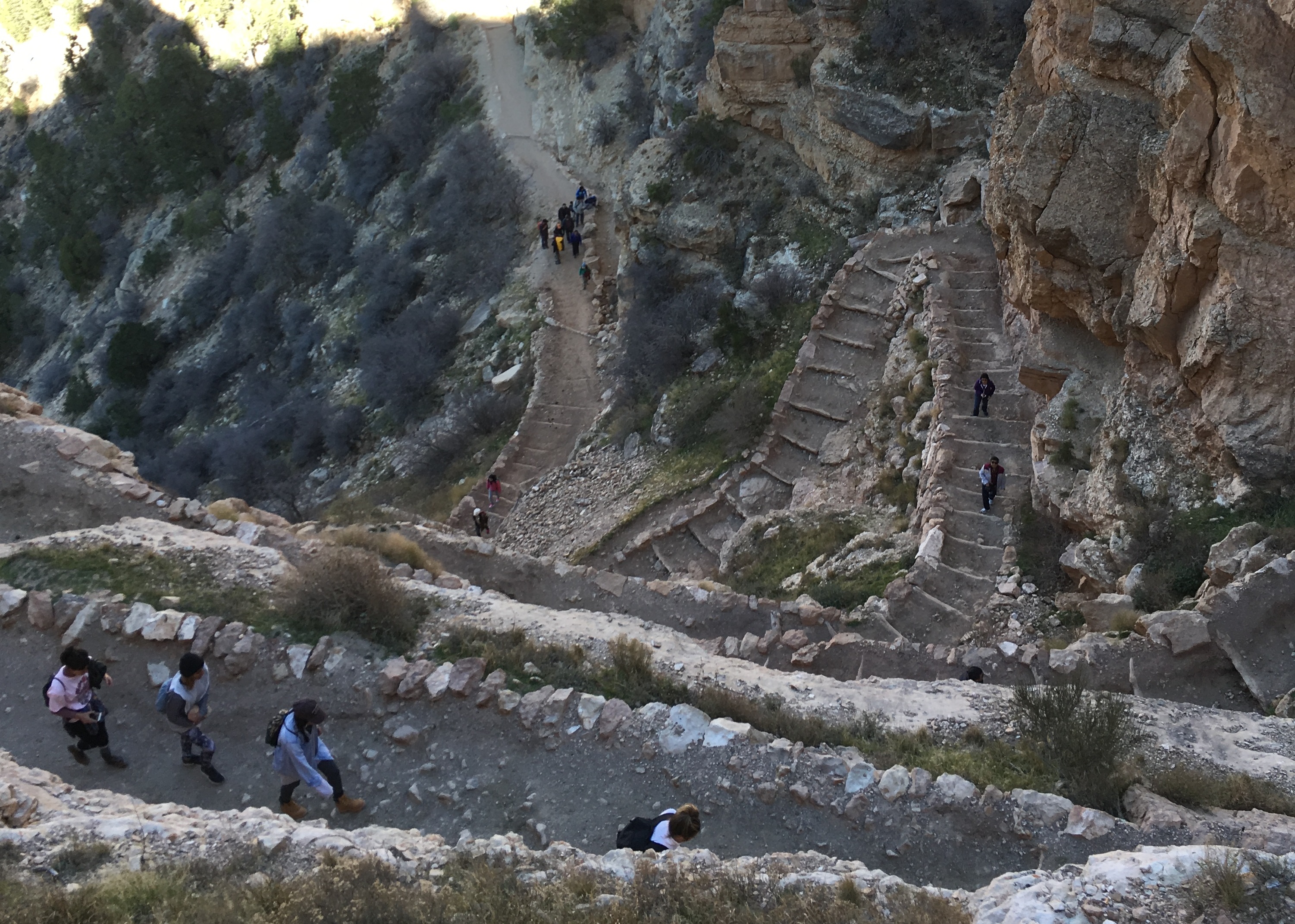 We arrived at the top and rode over to the hitching posts where we collected all of our stuff and a certificate saying we’d completed the ride. We thanked and tipped our guides and got a van ride back to the lodge to return our rain coats.

“This world is but a canvas to our imagination.” ~Henry David Thoreau #grandcanyon #desertviewwatchtower #nationalpark

This was an amazing trip. I can recommend it enough. And here’s the thing. It’ll probably be gone within my lifetime. There used to be tons of mule rides into the Grand Canyon. Then they got cut down to one a day. Now they’re down to 10 mules from 20. They also used to run a bunch of day rides and those got cut down and moved to a rim ride instead of a ride into the canyon. In the last year, Yosemite had 2/3 of its stables shuttered. The national parks are not really interested in having horseback (or muleback) riding programs. These opportunities are disappearing. So if you’re thinking you’ll just wait until you’re retired to do this trip, I urge you not to. If you want to do it, make the time, make the reservation, get out there and do it. 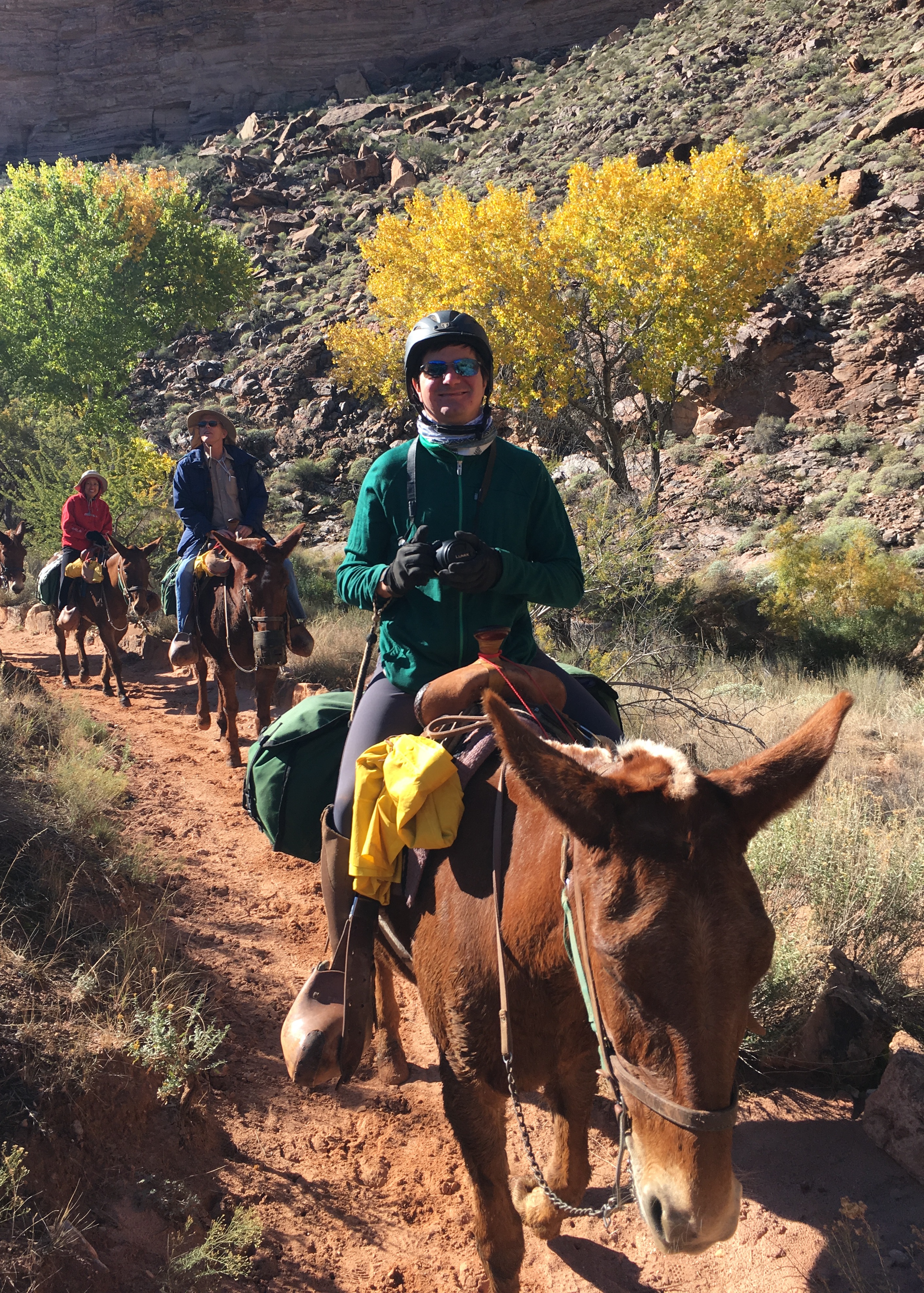 As far as the mules go, they’re awesome. All the mules are fat and healthy. They look like they’re very well cared for. They do the rides and then get 3 days off before going again. Although I was concerned that I’d get an obnoxious mule since I admitted to knowing how to ride. Instead I got an amazing little mule. She was kinda ugly, but so well behaved. I never once had to use my motivator and eventually just tied it to the saddle horn. She stood still when we stopped and kept up when we were moving. I felt complete secure on her even on the narrowest and steepest trails. I frequently put my reins on the horn to take pictures and I am fairly sure I could have put my reins on the horn for the entire ride. She would even park herself at the hitching posts during breaks. My husband really enjoyed his mule as well. 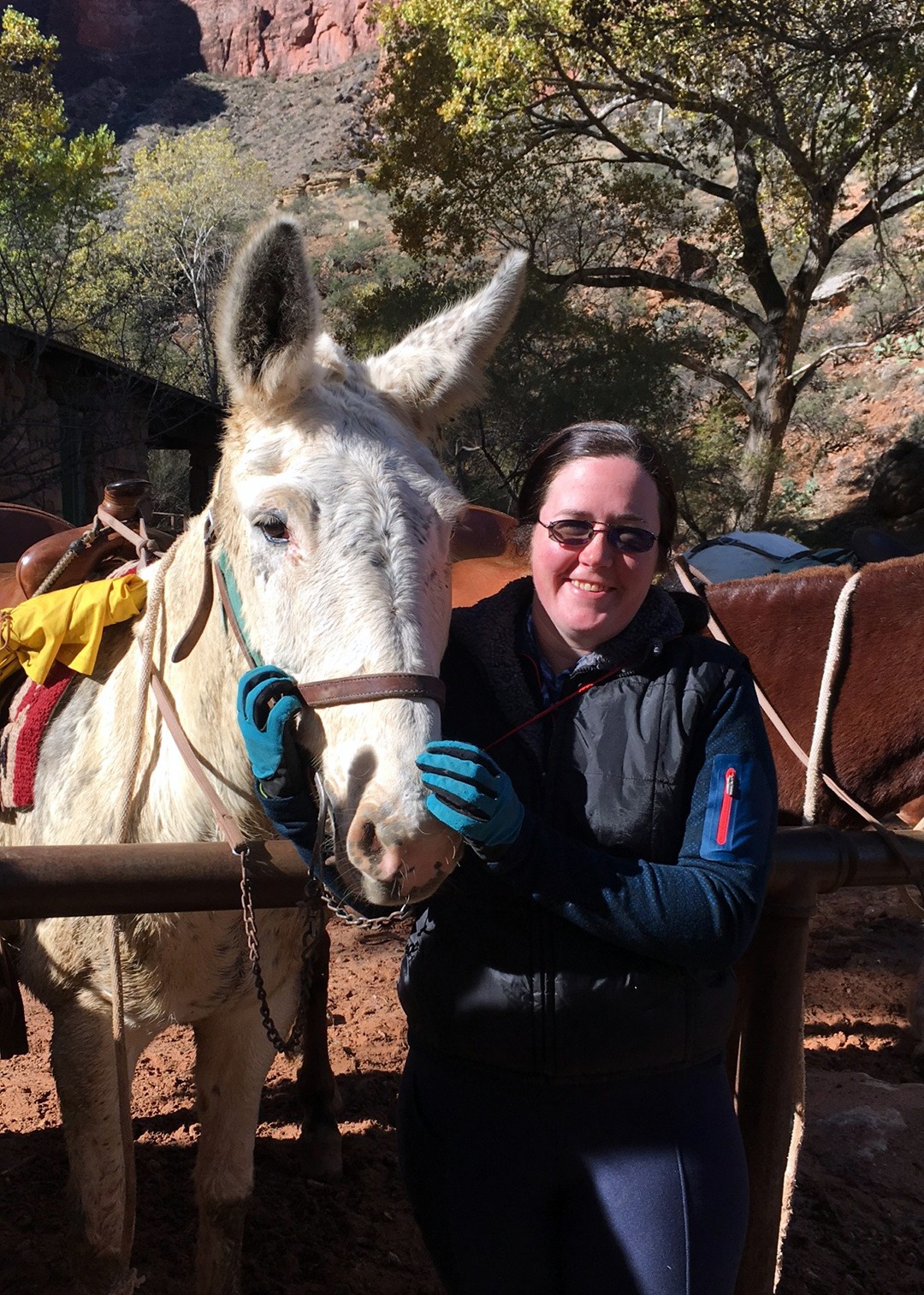 The guides were great, the rangers were very helpful, and the staff and food at the ranch were excellent. The whole trip was great. I just got back and I already want to do it again.