For the final house hunters trip, I flew out by myself. I was mostly on the trip to look at a potential rental as we weren’t seeing anything on the market we really liked and had decided to rent for a year. My husband was trying to save up his vacation days for the move, so he stayed home.

However, if I was going to be in the area, I was going to look at as many places as I could. House shopping from 3,000 miles away is difficult (hence deciding to rent in the area until we found a place). When you live nearby, you can rule out houses with a drive-by. Professional real-estate pictures can make a crappy place look great. While I could do a google earth/satellite view of the houses, a lot of them were located on dirt roads and google doesn’t drive down dirt roads, so I couldn’t even use street view. This often meant that we would arrive at a place and I’d know instantly that it wasn’t going to work, but we’d have to politely look around to appease the selling agent. 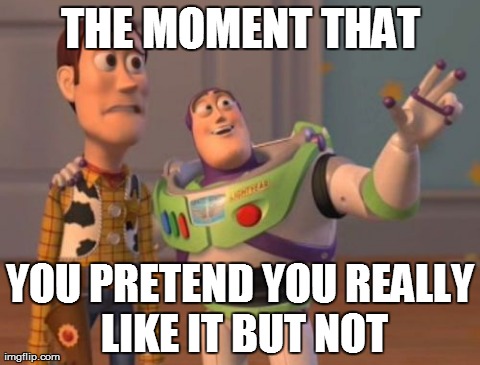 On Friday, I looked at the 3 houses in Maine, then drove to New Hampshire for the night. My realtor emailed me to listings that night and asked if I wanted to add either on. The one had just been listed that day. I was honestly so tired from the flight and all the driving I had done that I barely even looked at the posting, but it was in the right price range, had things that looked like they were on our wish list, and I might as well look at everything I can. Since our usual routine is to look at every single piece of information we can in advance, I was flying pretty blind on this one.

We looked at House #1 first and I truly loved the house, but adding equestrian facilities was going to be a difficult project due to the wetlands immediately adjacent to the house. The second house we looked at was fine, but was also going to be a huge project to put in an arena because the property was very hilly and very treed. While the house was very nice, I didn’t love it enough to want to deal with the property upgrades. The third house we looked at was up a dirt road that was so bad my little rental Yaris was literally skidding backwards down the hill as we tried to follow my realtor in his 4wd truck. I was already writing this one off because of the road – I am not going to try to get a horse trailer up and down that road – and then the house was just terrible. This one was a house my realtor added on without having seen himself or sending me the listing. He had planned to show me a different property for sale by owner that got scratched and he replaced that showing with this one, but he regretted that the second he got there. House #2 (number per the post) was the one I had the most hope for. Although it would be a project, there was a decent chunk of land that we could level out for an arena and barn, lots of pasture land, the house was so cool, and it was very close to town. But I just couldn’t shake the bad feeling I had about living right next to that road with the road going through the property. Although it was a dead end road with only a few houses past it, I worried about my dogs getting hit by a car. The owners had posted a bunch of cute little signs about “please slow down for small dogs” and I wondered how many problems they’d had. I don’t plan to let my dogs roam the countryside unsupervised, but I would like to be able to let them run around with me while I’m outside and I didn’t want to live in constant fear of them getting hit.

That leaves House #3. Because I hadn’t really spent a lot of time looking at the listing, I didn’t really have many expectations for this one. I was kinda shocked. My realtor hadn’t been able to look at in advance either and he was also surprised by how nice it was.

The first thing that draws you to this property? The freakin’ view: 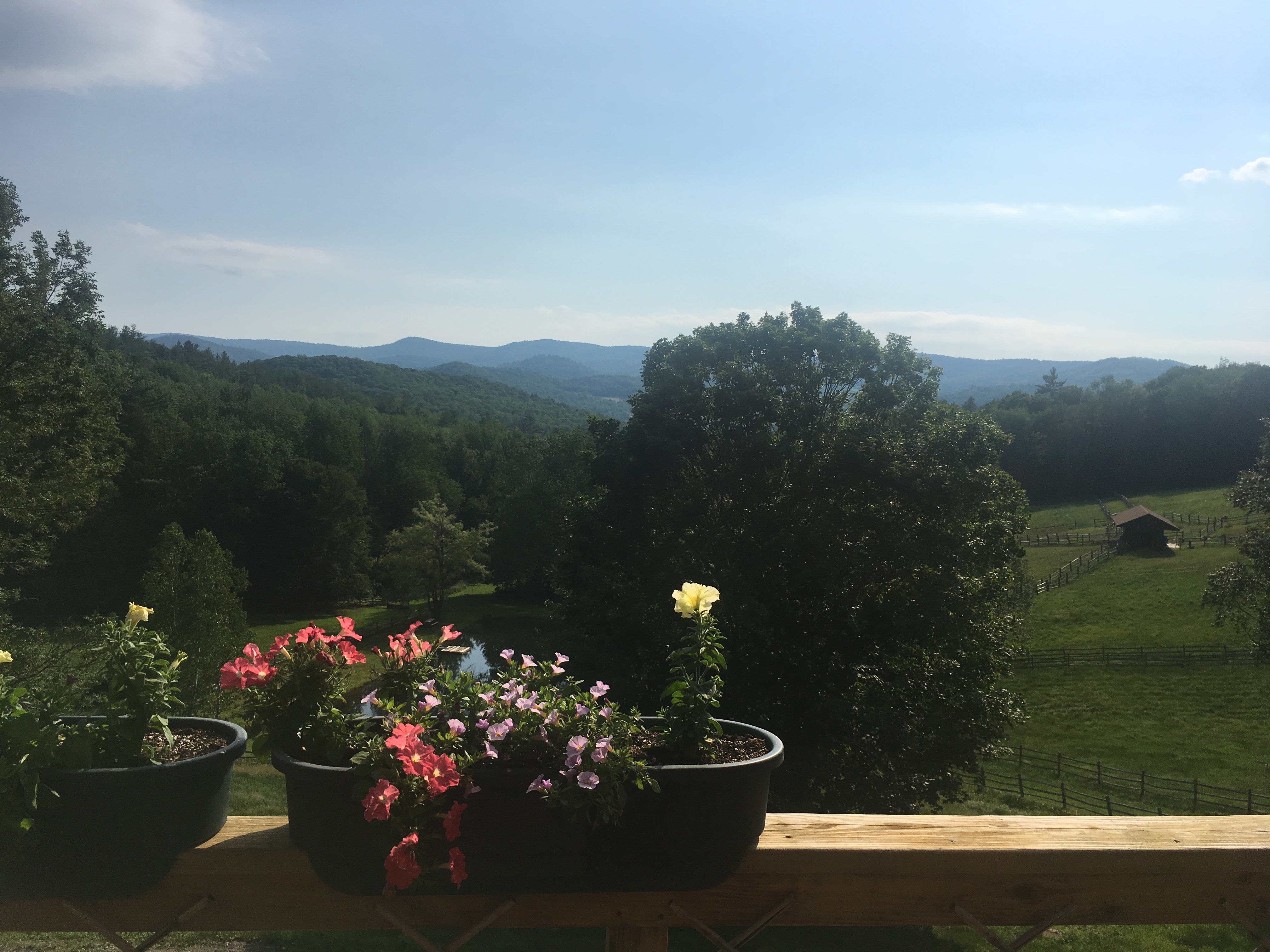 The house is set on top of a hillside overlooking a valley. You can see hills in the far distance, but directly below the house is acres of green pasture and forests.

We all stared at the view for a bit and then decided to look at the barn first. I already mentioned that I love a good bank barn and this one was set up really well with 6 stalls, a tack room, grooming bay, a wash stall outside, feed room, attached shaving storage, hay loft above and tractor storage below. The people who lived here had built this property from the ground up and everything had been organized so well. They even set up a spot off the bank to dump manure down into a manure spreader. 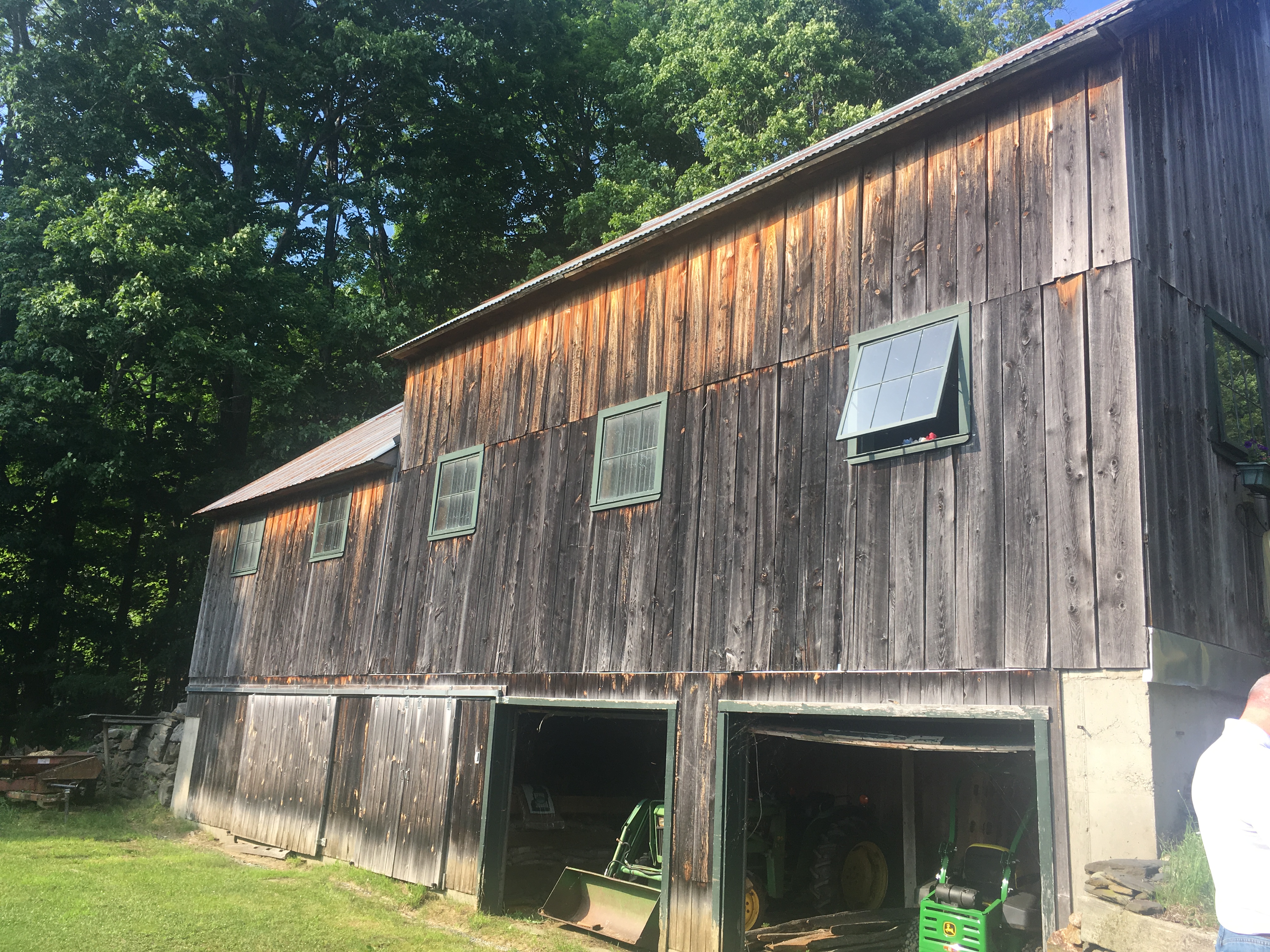 I loved the barn, and then we hopped in the golf cart and went down to the second barn. This is a 4-stall barn attached to a series of paddocks and pastures. Everything was so well planned. Each stall opening into it’s own paddock and then you could open different gates to allow the horses into different pastures. There are also additional pastures for rotation. 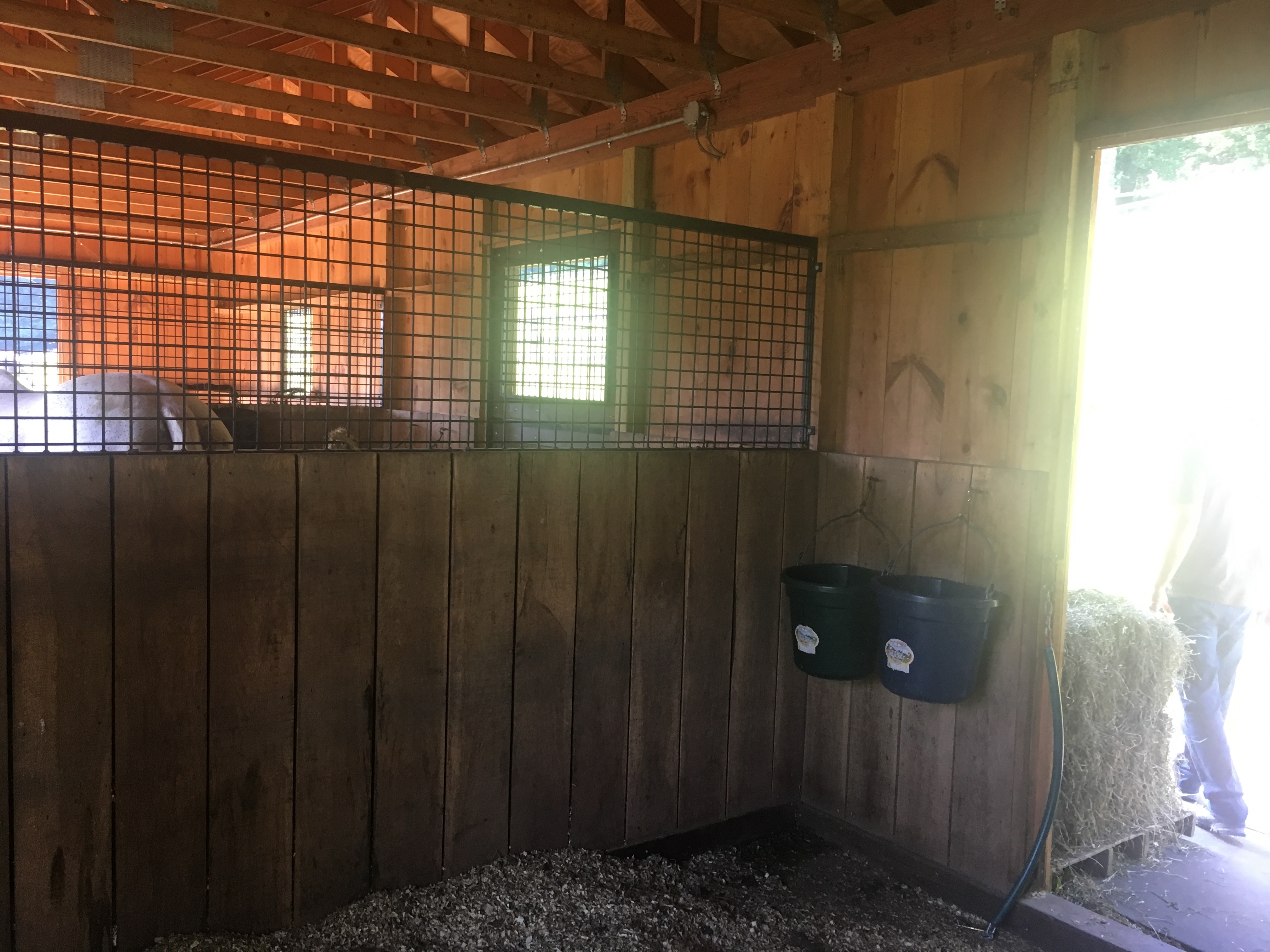 We hopped back in the golf cart and went around to the arena. It’s a pretty big arena (about 150×100) with a little shed for storing jumps. The footing needs work. It needs to be re-leveled and there’s grass and weeds starting to come up in it. It’s usable for now though. 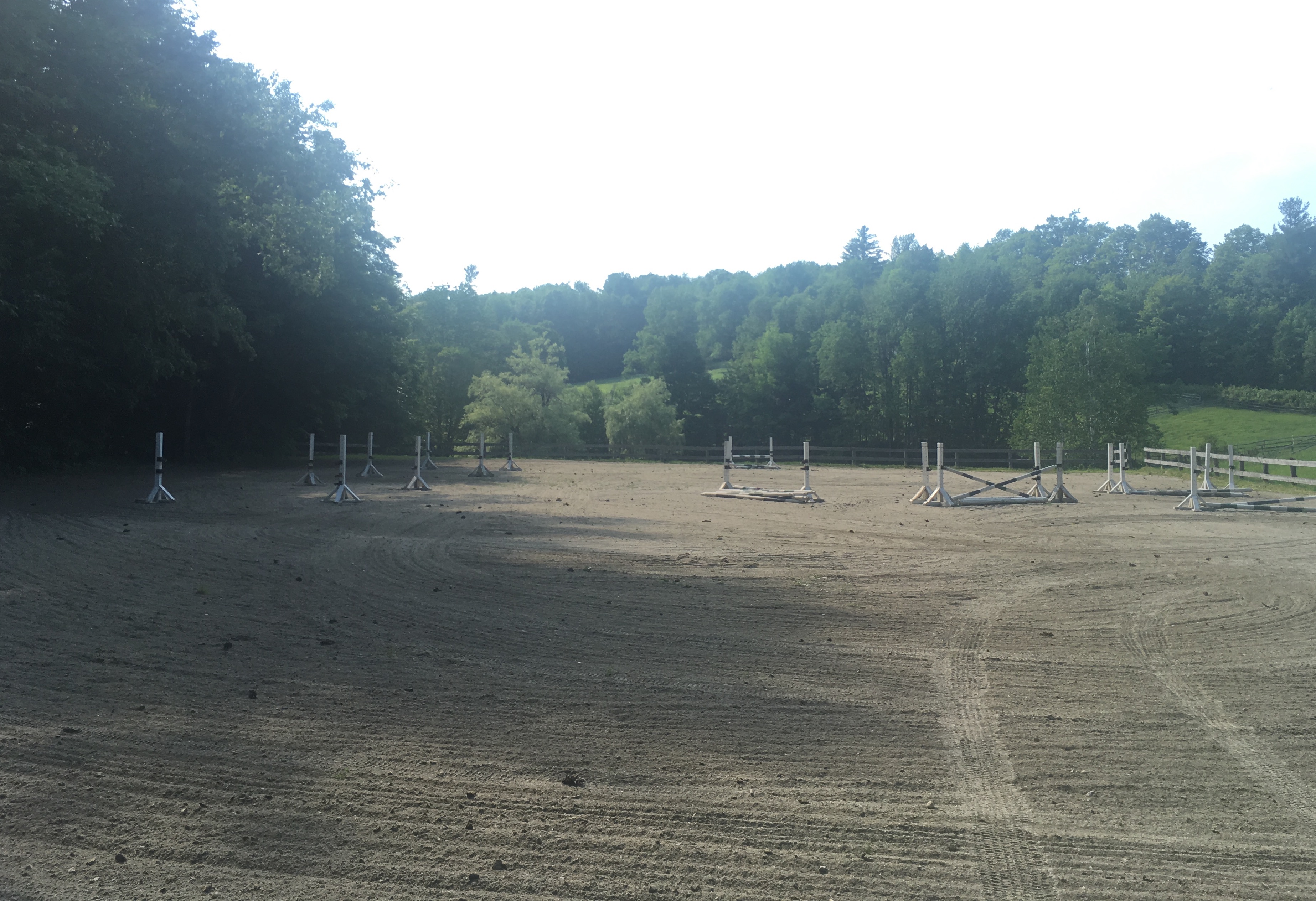 Alongside the arena is a creek and, in the field past the arena, there’s a pond. As we walked down to check out the pond, I noticed cross country jumps. There’s a line of ditches and trakheners, a log pile, and, in the far field, a bank complex. There used to be a water jump, at a point where they had dammed up the creek a bit, but it’s long gone. Most of the cross country jumps are falling apart, but we can fix that.

We took the golf cart up to the house and began the house tour. As I mentioned in the house hunter post, I don’t like open floor plans. I am just way too messy for that sort of life. I like rooms and division and privacy. This is, by far, the most open house we looked at. It honestly takes open floor plan to a whole new level. 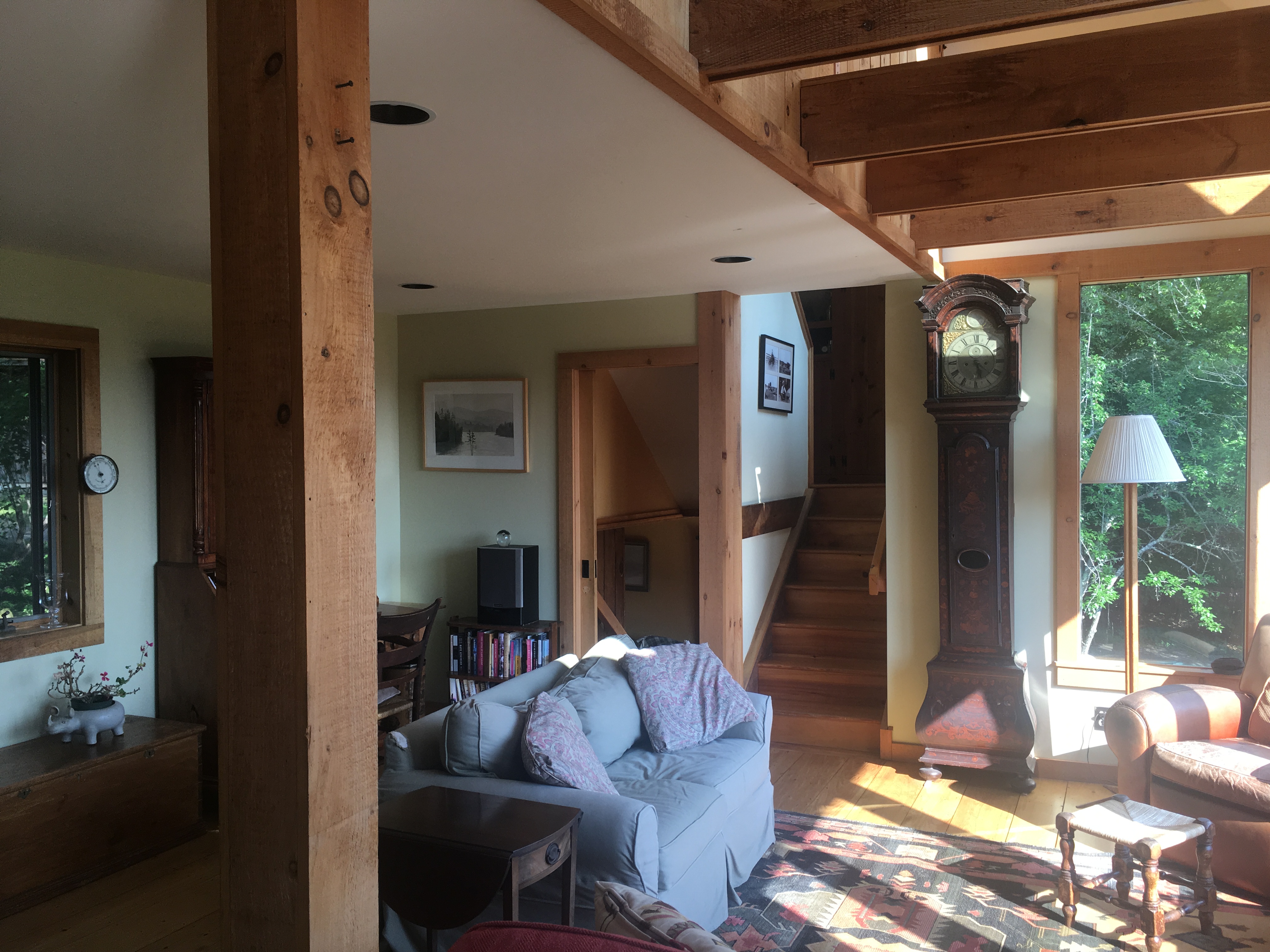 The whole first floor, except for the guest bedroom is one giant, open space. The kitchen, dining room, and living room are all combined. To make it even more open, the living room connects to the upstairs (you can see the loft opening in the picture above). There’s a den down a half flight of stairs and an office up a half flight of stairs. If you continue up the second half of that staircase, there’s another office space that is the loft above the living room and then a glass door to the master. There’s a second set of stairs that go directly from the kitchen to the master bedroom. There’s no door to these stairs. The master bathroom has a glass door on it. I told you it was OPEN concept. Yeah, I’m gonna need some doors, stat. Or at least, I’m gonna need some solidity added to the doors I have.

While it’s not my ideal house, I’m not complaining. The house is gorgeous. Open floor plan isn’t my cup of tea, but the views can’t be beat and while they might not have added enough doors, but they didn’t skimp on windows. 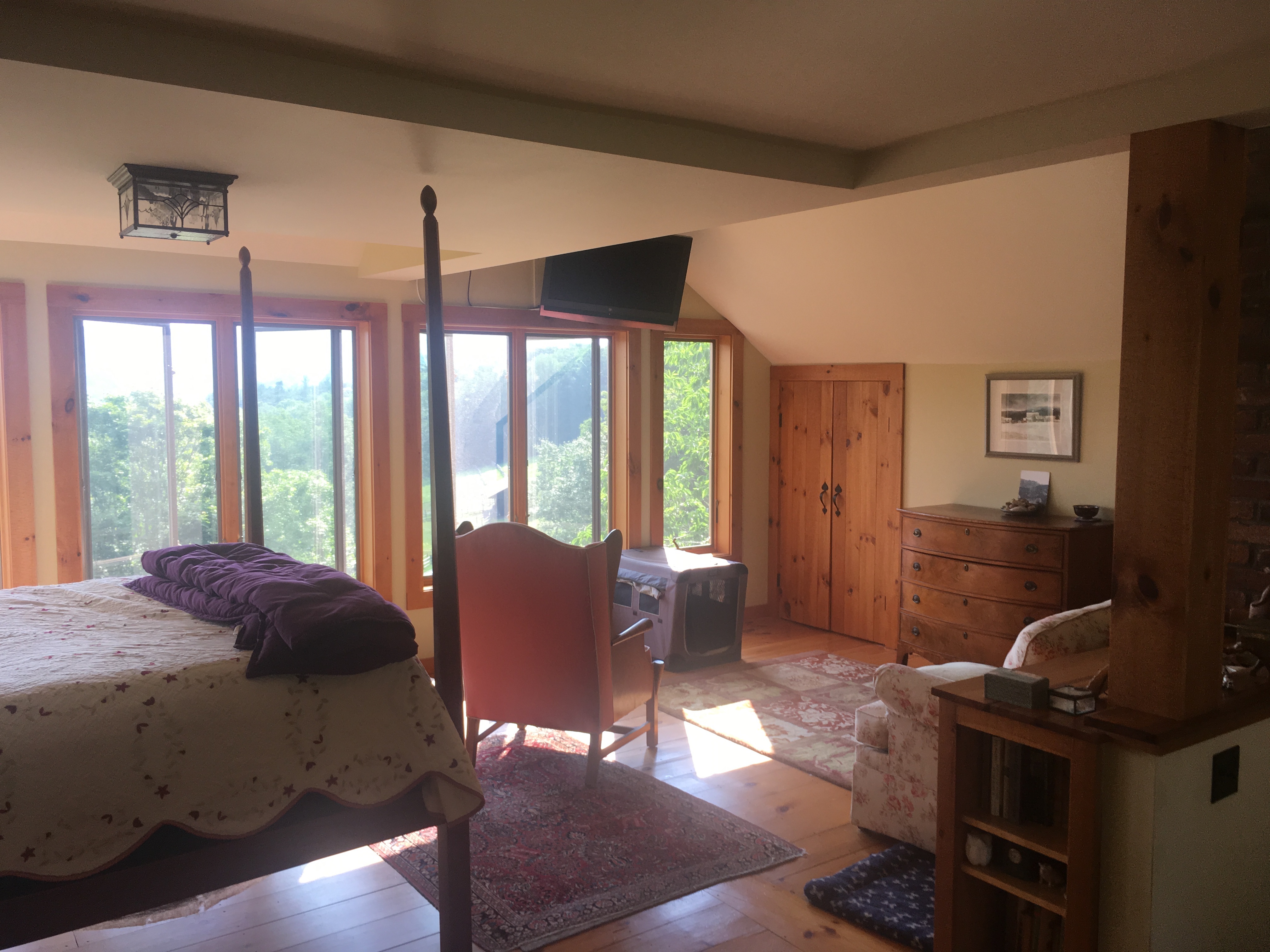 It was at this point that I texted my husband and told him he needed to see the house. It was Saturday and we were leaving for Arizona for 2 weeks on Tuesday. I asked my realtor if he thought we could come see it after Arizona and he was like, no, it’ll sell before you get back.

So I called my husband and he booked a red-eye for that night. He departed SF after midnight and arrived at the airport in NH around 1pm. I picked him up and drove back to the house where we did the house and barn tour again. We got to meet the owners who were very nice. The wife is an eventer and did Rolex back in the day. I think she liked that we were fellow riders. This time, in addition to the house and barns, the selling agent took us on a golf cart tour of the trails. A lot of the houses we looked at claimed to have “trails” but they were barely existent or overgrown. This place has miles of trails all wide enough for a gold cart – or riding side by side. 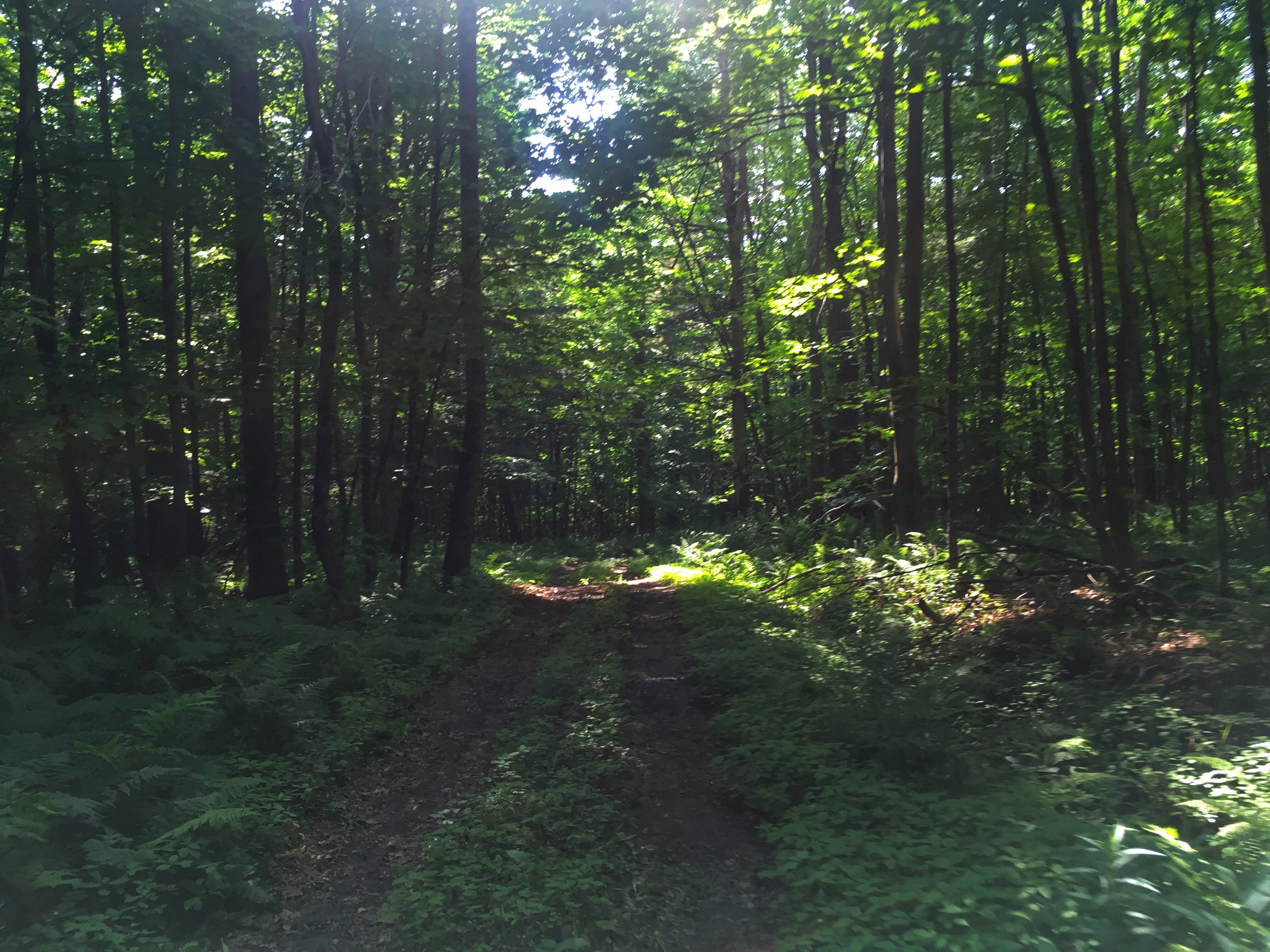 It was a bizarre heat wave in Vermont that weekend. The weather was actually hotter the further north you went and Vermont was worse than Massachusetts and Canada was even hotter than that. It was like 101 degrees and we were all drenched in sweat (not a single house we looked at had air conditioning) by the end of the tour and all ready to get back in our cars for A/C. The selling agent drove off, we discussed the house with our agent, talked about what amount to offer and contingencies we wanted and told him write it up. We signed the offer electronically on the drive back to New Hampshire that evening and they accepted it by the next morning. 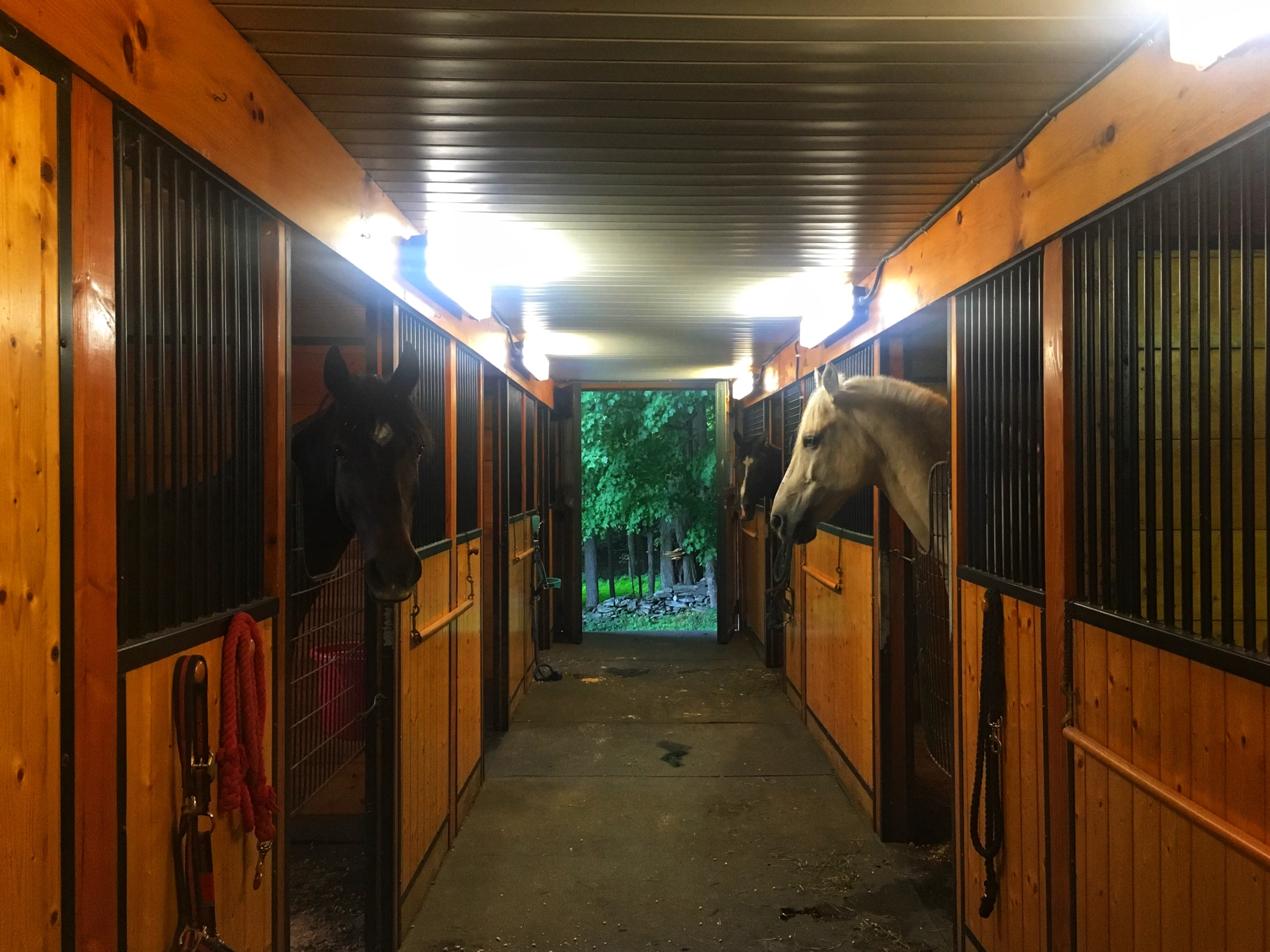