Last Friday morning Fig messaged me about a bay Arabian gelding for sale on Facebook. This was my response:

I’m including this screenshot because it’s proof that I knew this was going to be a bad idea, but ignored my own instincts.

The horse was cute and met all of our criteria and our initial conversation was actually perfect; it was entirely online, no phones were required, and the response was instantaneous. The horse was 20 minutes away from another horse we were already scheduled to look at on Sunday so I set up a time to look at this one as well. I even commented to my husband that this was exactly how I wanted horse shopping to be.

But really, it was just getting started. Saturday evening I got a message from the seller asking for information on me, what I’d be doing with the horse, and where he’d be living. Perfectly reasonable questions for an individual selling their horse. I responded with some pictures of our horses, what we were looking to do with the new horse, and pictures of our barn set up. Which by the way, is awesome: 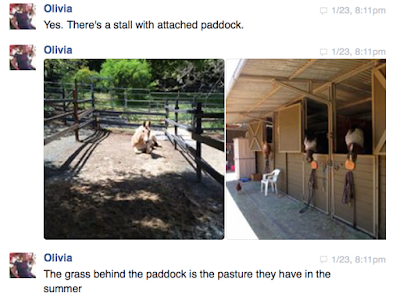 I mean, I’d want to sell my horse to me. Wouldn’t you? At this point, I’m still not annoyed. I don’t mind an owner asking questions. But then she goes down this rabbit hole of questions about pastures and where do I live and where are the horses and do I plan to own him forever, and I’m starting to get annoyed.

Then I get this response:

I didn’t answer the “call” because I don’t use the messenger app. I basically gave up, told my husband we weren’t going anymore and went off to do something else.
A few hours later, I get more messages. So long as there’s a pasture, we can come see him. I’m no longer interested in interacting with this person, but I drag myself off the couch and ask my husband if he still wanted to look at the horse despite the crazy. He says, it’s 20 minutes from the other horse, we might as well.
Fine.
So I message the crazy girl back. She asks how I’d plan on paying for him. WTF? I respond, check/money order/whatever. Her response:

Honestly, I was never going to give her cash. I just said this because I was tired of having this conversation and she’s clearly a stupid teenager who doesn’t understand how the world works. If we bought the horse, I’d force her to involve her parents and then pay by money order or something sane.
Sunday we drive up to see this horse first. We arrive at the scheduled time. I text her and no answer. We wander around the barn and I ask people if they know where I can find ___. Someone points her out. She’s in the aisle across the indoor trotting the horse out of the barn. Okay then.
We go around outside the barn and start down the path we can see her walking/jogging down. Does she stop or acknowledge us? No. We finally catch up to her in the outdoor arena where’s she’s getting set up to lunge him. She says she’s sorry, but she got here late because she was “busy” and he was muddy so she needed to wash him. Yeah, that’s a reason to literally run away from the people you scheduled to meet with.
Anyway, she starts lunging him and telling us more about him. To start with, this horse is not the advertised 15.1hh. He’s probably 14.2/14.3. Also, he hasn’t been ridden in a month and has been living in a pasture. He’s actually missing a shoe and she has no idea when he lost it because she hasn’t touched him in a month. I can’t remember the psychological term for this: where you keep going down a bad path because you figure you’ve already invested so much, why not stick it out? I know sunk costs is the time we’ve already wasted, but I can’t remember the term for why we’re still going forward. Stupidity? I don’t know. Anyway, that’s the mental place we were at at this point.
So we watch her lunge him. He’s pretty crazy. Bucking, leaping, racing around with his tail flagged. A little concerning, but all of ours act the same way when we lunge them right now because they’ve got so pent up energy. So it might be okay. I walked off to get my vest from the car because we hadn’t brought all of our riding stuff with us when we were just walking through the barn looking for this girl. I told my husband before I left: “she rides the horse first. Do not get on it until I get back.”
I actually get back before she gets on and we watch. She gets on and the horse stands quietly. She turns him and he actually knocks the mounting block over walking off. No reaction. She walks, trot, and canters him. He’s totally fine. I thought he might be super “excited” about cantering, but no bucking, no bolting. A little head shaking like he wants to go faster, but no real antics. 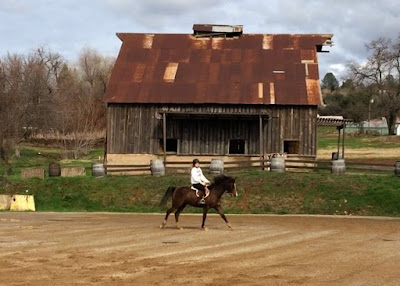 My husband goes to get on and the horse flips out. He’s trying to run away from the mounting block and spinning away from it. Husband manages to get on and he takes of broncing. Husband falls off. Horse immediately stops and just stands there like no big deal. I ask, why didn’t you just jump off? His answer: I don’t know how to do that. Okay then; we will be having lessons on that when we get home. My husband went up to the bathroom to wash off some off the mud he’s now covered in and the girl asks me if he wants to ride again.
I’m like, I don’t know; I doubt it, but why don’t you just wait and ask him. Husband finally comes back, says no, he’s not interested anymore, and we leave. We had to go to Target and get some bandages as he skinned his arm landing in the sandy arena. Thank god for vests and helmets. And yes the helmet is trash and a replacement already ordered. And yes, I made him ride Shasta around the arena and practice emergency dismounts.
And this is why I don’t do Facebook horse sales.