Horse #8 was a 15.2hh 2010 bay Arabian mare. She’s out of a breeder that does competitive Endurance herself and breeds for it. Her siblings have completed Tevis and other endurance rides, some as top 10 finishers. She was started at 5 and then sat for 6 months so we weren’t able to ride her. The trainer said she would get her back to riding if we want to come back in 2 weeks. We did get to watch her go around in the little arena the breeder has, but the lighting was terrible so I really have no good evidence.

I didn’t really even get any good pictures either so here’s a shot from the sale ad.

Her conformation is really nice and she has good feet. My only real concern is she’s pretty narrow in the chest/shoulder. I like a wide chest on horses. From my limited understanding and google researching it seems like Arabians develop really slowly and there’s a chance her chest/shoulders will expand over the next year or so. But I don’t know if I believe that. 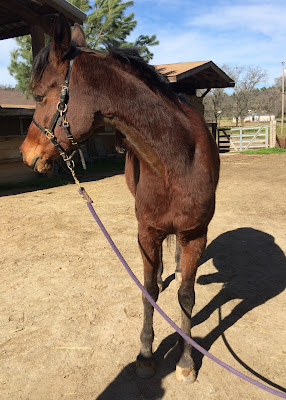 She was very friendly; she actually came walking over to the gate from her pasture/paddock as we were approaching. And she had friends out there so is not like she was lonely, she just wanted to come in and be with people.  My husband really liked her and wants to go back again when she can be ridden. I think she’s a very nice horse, but my husband doesn’t actually want to do Tevis. He wants to do 25 milers and maybe a 50. She’d honestly be wasted on us. She’s on the maybe list depending on a re-visit.

Horse #9 is her 1/2 brother, a 15.2hh 2010 bay Arabian gelding. I actually like his conformation a bit better. He’s still narrow in the front, but a bit stockier. I also like the chrome. 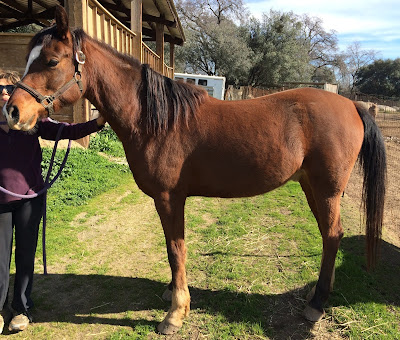 However, he hasn’t been started. And he was definitely a lot less handled all around. When he was being walked up the path to the arena we were walking quietly behind him and he was trying to bolt away. We had to wait down at the pasture for him to go up to the arena and then walk up. He was also a lot more frisky on the lunge.

Sorry again for the terrible video quality. I like his movement: nice big floaty trot. The footing in that arena was crap so they both took some weird steps.

My husband liked him too, but ultimately felt that he was too green for his price so we’re going to pass on him.