We actually went to look at this horse last weekend, but I didn’t get around to posting about him last week. Horse #10 is a 9 year old 15.1hh dark bay Arabian gelding. He’s been used as an endurance horse and has completed a little over 300 miles of official endurance rides with 1 LD and 6 50 milers. He also made an attempt at Fireworks and was pulled at the final vet check. Owner says it was a slight offness that was never seen again and he’s totally fine now. I don’t know how much I believe that story since he didn’t go to another ride that season. We would have a vet check done though so I’m not fixated on it.

We met the owner at her place last week. She told me in her email that her driveway was a mile long and required 4-wheel drive so she’d meet us at the end of the driveway. I thought that meant she’d drive up in her 4-wheel drive vehicle and we’d go back down to the barn with her. That is not what she meant. When we pulled up at the driveway, she was there on the horse with a dog and a pot-bellied pig.

I am completely obsessed with pigs and plan to get one the moment we own our property. Unfortunately the pig was shy and wouldn’t let me pet her, but she was really cute. Apparently she really likes going for “walks” so she followed the owner up. 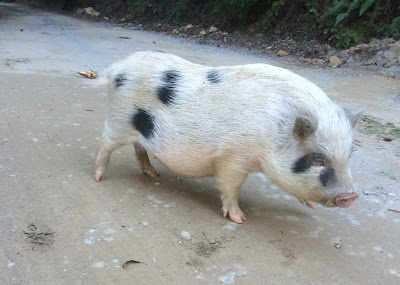 Anyway, we get there and the woman has ridden the horse up to meet us, but she’s ridden him up in a rope halter with lead rope as reins and no saddle. As much random crap as we’ve been through with looking at sale horses, this was a new one. Her comment was that she thought maybe we’d bring our own saddle. In what world is this a thing? How would I know what saddle would fit your horse? I know you own saddles that fit this horse, why would you not provide one.

We scrounged around looking for a place for my husband to get on and settled on a large boulder. My husband had to sort of jump over onto him and the horse went skittering. My husband slid right off the side and landed on his feet. So we stupidly decide this is still a good idea and try again. This time I hold the horse still and the owner gives him a leg up. Horse is fine now and husband goes off to walk and trot up and down the dirt and rock driveway. Without a saddle. And then the woman mentions he’s really slippery because he was dirty so she sprayed him down with show sheen after his bath. Why? Just, why? 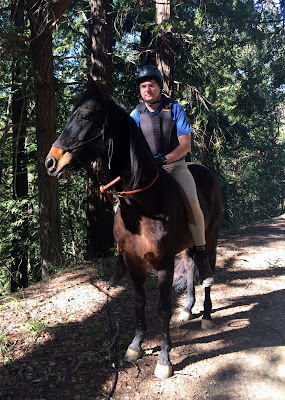 Aside from the inability to asses this horse without a saddle and proper footing, we were a little concerned about his height. I think he probably is a really 15.1hh, but that’s at the withers. He’s shorter at the back. And he’s skinny. And I don’t mean racing fit. I mean skinny. His hips were pointing out and he looks like he needs to gain a good 100 lbs. Possibly more. I felt really bad for him. He really doesn’t take up enough leg. 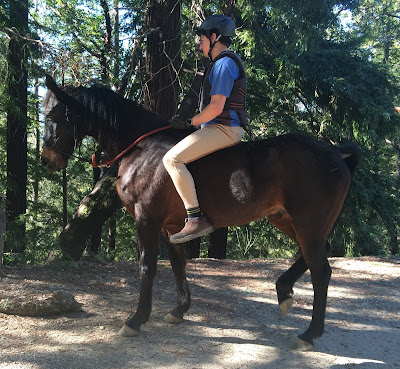 He also has some weird marks on his back. The owner claims they’re birdcatcher spots, but they look more lace-like, not like spots. I’ve never seen this before. 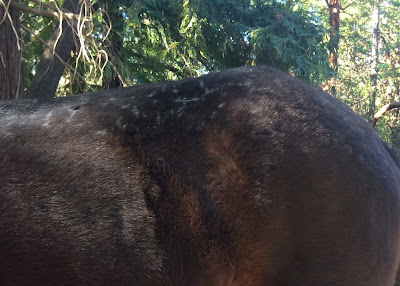 So we made arrangements to try him again this weekend at the Santa Cruz Showgrounds. This way there’d be an arena and trails and – you know – a saddle. She was actually showing him to another prospective buyer first. They went and did a 7 mile trail ride before my husband got there. I couldn’t go so I told my husband to get some video.

Sorry about the video quality. The owner did not do a great job. It was originally vertical and I had to zoom in and out a bunch. Aside from arena work, they also went out and jumped the cross country course at the showgrounds. The horse has supposedly never jumped before, but went around happily jumping things including a ditch.
I think the saddle helped a bit with the height issue, but my husband still felt like he was a little small. It’s very hard to find tall Arabians though and the mare we looked at the previous weekend would be the same issue. If this horse was just a little taller, I think my husband would have bought him. As is, he’s seriously considering it. But he’s also considering a Mustang. Stay tuned for that story.