On Friday, I had my first dressage lesson with the trainer since Nilla’s injury. Nilla was finally fit enough to make it through a full lesson and I was eager to get back to work. Unfortunately, I don’t have pictures from the lesson. Which is a shame as Nilla’s outfit was totally on point. 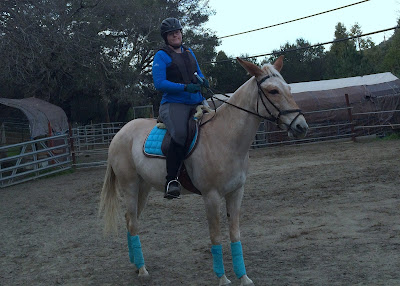 I’ve been feeling like we were doing really well, but I’m alone and I’m rarely even being watched when I’m riding. Let alone having someone who knows what they’re doing watching me. My husband is pretty content to tell me we look great. Regardless of actual greatness.

The trainer is not at all hesitant to tell us how poorly we’re doing. This is not to say she puts us down. She was constantly going on about how much we’ve improved. And she absolutely loves Nilla. We’re the only client she travels for and she actually moved to a new barn which is farther away and still comes to us. Because she likes the mule.

As much as she likes us, she’s not afraid to tell us what we need to work on. I was showing her how I’ve been working on Nilla doing walk-trot transitions without throwing her head around. And her comment was that she was way too slow. Which, alas, is very true. In getting Nilla to make quiet transitions, I’ve been letting her get away with making them very slowly. Like, walk a few steps and then shuffle into trot. I’m not really doing us any favors.  We’re not going to have multiple steps to make a transition at a show.

So we worked on quicker transitions. And if I didn’t get a quick transition, I went straight to a hard ask. With a pony club kick or a tap from the crop. Which sometimes resulted in Nilla racing off to canter. But that was fine. Asking for forward means go forward, not ignore me and shuffle along on your own time.

Once we had prompt transitions we began to work on moving off the leg. Nilla isn’t really moving off my leg so much as she is moving off my rein. This is really my fault as I’m lousy at using leg. So we started doing serpentines… in counter-bend. Oh man was this insanely difficult. I kept getting yelled at for “cheating” by either crossing my rein over the neck (like neck reining) or pulling her around the turn with the inside rein. Just getting her to turn left while bending right was like pulling teeth. Then we’d get around the turn and it’d be time for another turn in the other direction.

In addition to being difficult, it was exhausting. Like physically exhausting. And it took a while, but we did start to get it by the end. It wasn’t pretty, but she was moving off my leg. And when I rode her again on Monday, I did the serpentine at the walk, without the counter-bend, and just asked her to make the turns off my leg alone. I even dropped the reins to the buckle and just legged her around the turns. She is such a fast learner.

I think this is a theme with me. I constantly underestimate Nilla. I hesitate to push her and it takes a trainer telling me to do an exercise I would have considered completely outside or our level to realize she can do it. It’s not flawless. In fact, it was pretty ugly, but she was able to do it. And the end result was great. And we’re certainly not going to get better by doing the same old thing. Growth isn’t going to happen for either of us if we don’t step outside our comfort zones.

On this same theme, I showed her the turn on the haunches we have been doing and the trainer was not impressed. Me tapping and tapping and asking her to slowly move over was not impressive. So she took my crop and did some in hand work with me on Nilla. And we got her to do little 1/4 pirouette turns. Like sitting back and actually jumping her front feet over.

The mule is better than she wants me to think she is.