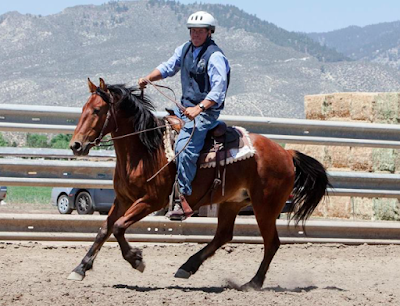 Thanks for everyone’s comments on yesterday’s post. I didn’t post my own choices because I wanted to see what other people liked without my choices influencing anyone. I found it really interesting how much people picked the same horses as I had an each other. Some horses were clear favorites. Here are the horses people picked.

Dago Red – 3 votes
Jericho – 3 votes
Winston – 3 votes
Eugene – 2 votes
Squirrel – 2 votes
Johnny Cash, Sancho, Hansom Ransom, and O’Malley – 1 vote each
When we started looking, the videos hadn’t been posted so we were going off the catalog. My husband and I actually had slightly different lists. We didn’t write them all down at that point, but I do have our first texts. 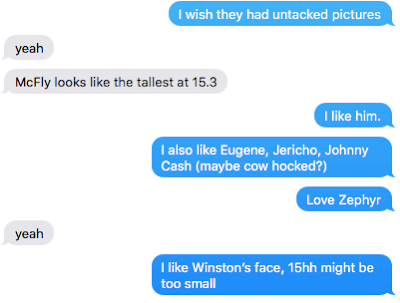 Does anyone else converse with their SO through text even though they’re within voice range? We also talk to each other too, but we have to raise our voices a bit to get around the office wall so it’s often more convenient/less shouty to chat online.
Anyway, my husband’s initial list was:

I made him add O’Malley and Winston.
Then the videos came out. The hard part with the videos is that some of the prisoners are not great riders. Some of them have never ridden a horse before they start this program so I commend them, but it still makes it more difficult to compare the horses equally. There are a few videos I watched where I thought the horse might be off, but it might just be the rider bouncing around on them. There are others where the horse is flailing around and/or not getting the correct lead at canter, but I’m not sure it’s the horse’s fault. They might be that unbalanced, but they might also be hindered by a rider.
The videos were all done a few weeks ago so by the time we go to see the auction, they will have a few more weeks of training. Apparently, the auction is preceding by a parade and drill-team type exercise. And then the trainers will ride and do extra things while their individual horse is being auctioned. Previous trainers have done roping, tarp-work, spins, and other things to show off their horse’s skills. As much as the videos changed my opinions, I haven’t removed any from our list. I actually added Squirrel because I like his video. We’ll re-evaluate during the preview.  To be clear, even the horses on the list are not definites. I will be perfectly fine with walking away without any horse.
That said, our top three (all with equal scores so presented in catalog order) with input from myself, my husband, and our trainers are:

This is one where I think the horse is unbalanced by the rider. When he’s not being circled really tightly, he canters nicely. I wish I had some trot to evaluate actual soundness. He’s a little butt-high, but he’s also only 4 so he may grow up a bit. My dressage trainer likes him best.
Jericho

This is one of the most well-trained. Watch the video; he even does flying lead changes. And he looks calm and quiet while also being quick. I think he’s a little over at the knee and he might be cow hocked. It’s hard to tell from the picture so I’m reserving judgment.

This one surprised me since I generally don’t like chestnuts. But he’s such a cute, drafty horse. He looks like a horse-sized pony, all chunky and with flaxen mane and tail. His expression is also calm and sweet and his little picked ear seem so eager.

McFly and Zephyr are next on the list and then the other 4 previously mentioned. I have a feeling everything will change when we get there.

Now I just need to find some pants that aren’t blue denim (I really don’t own any that aren’t riding or yoga pants) and contemplate not having my phone or camera on me during the event. Wish me luck.