When we were warming up for dressage, Levi was super jealous of all the pasture horses galloping around and wanted to join them. My insisting he pay attention to me was not appreciated. This led to us spend more time warming up than we really should have. As we were going around the outside of our arena, I realized – as I was increasingly resorting to kicking – that I had forgot to put my spurs on. Dammit. 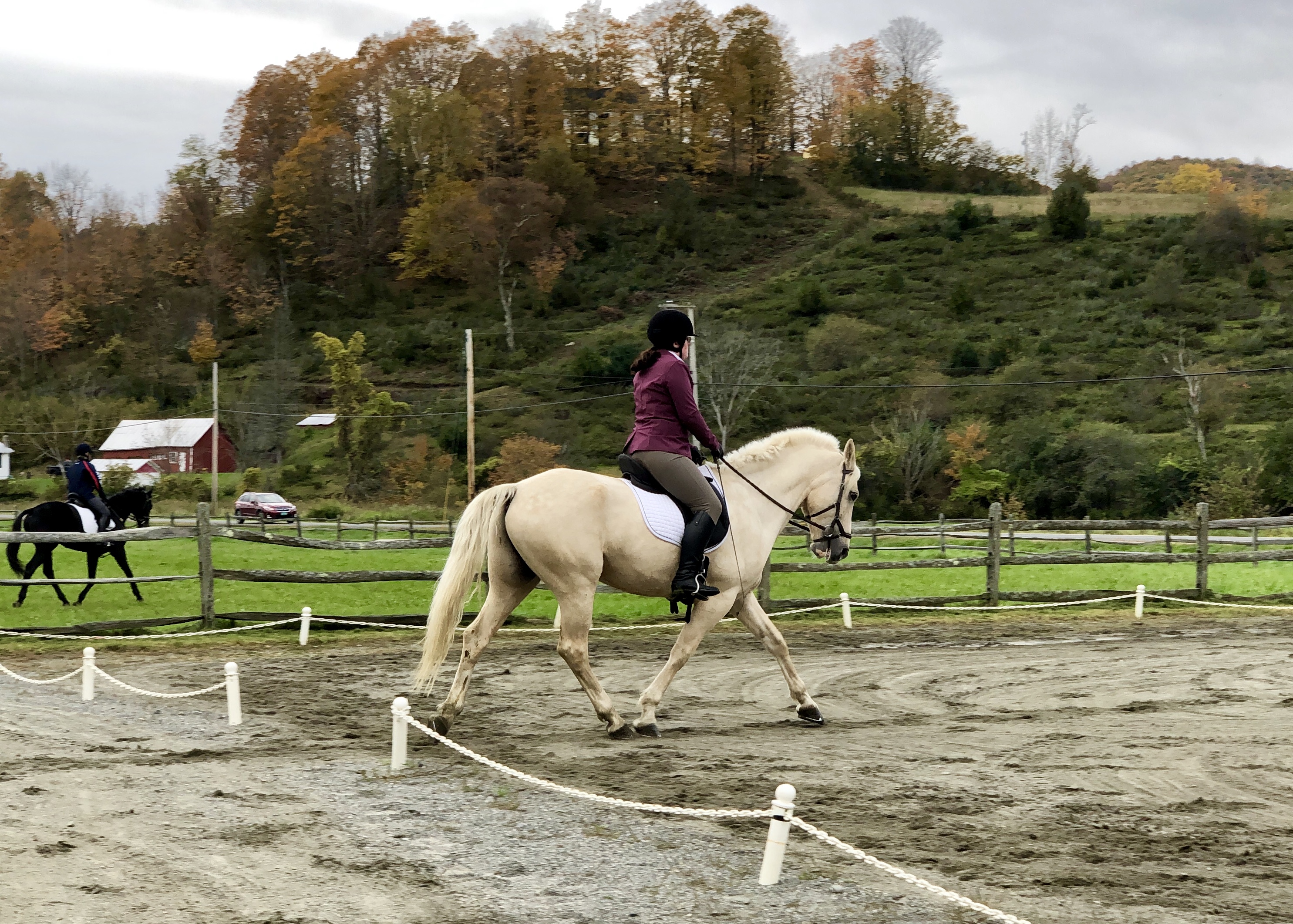 Levi was quite sluggish and behind my leg. We actually managed an 8 for our entry, but then things rapidly devolved as he got more and more tired and started ducking behind the vertical. 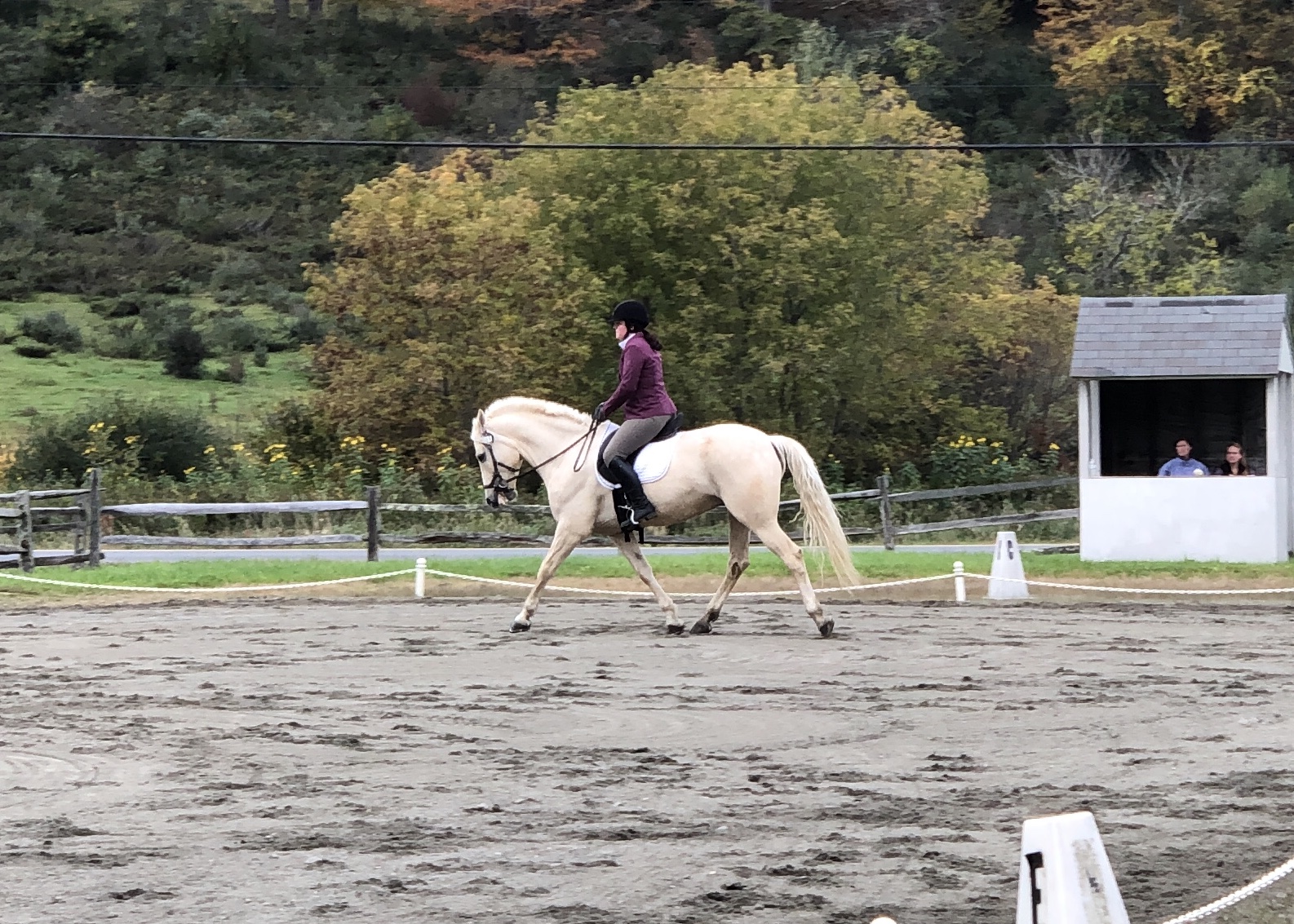 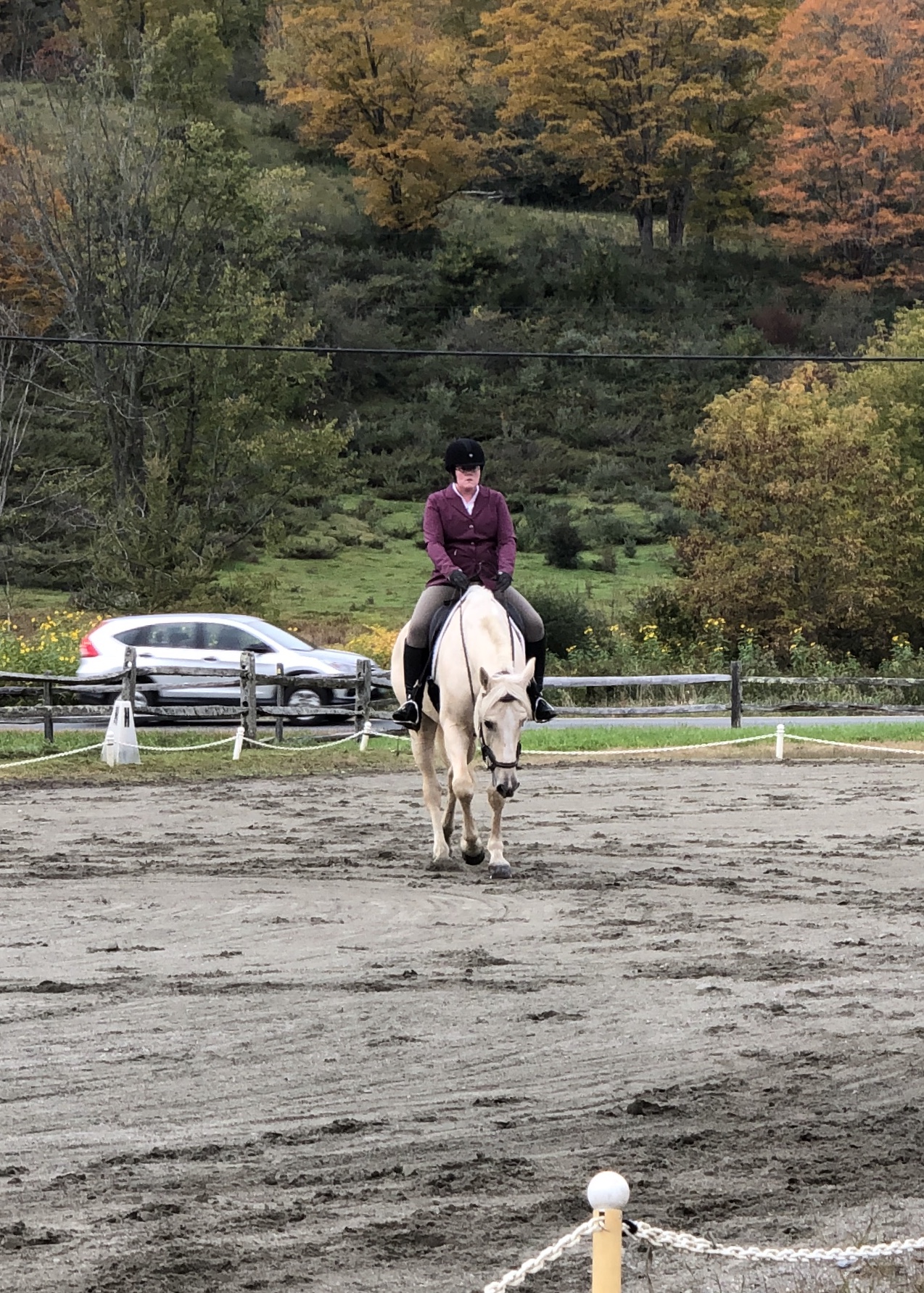 You would think the laziness would make for calmer canter transitions, but no. Levi needed so much encouragement to canter, he turned into an Arabian. 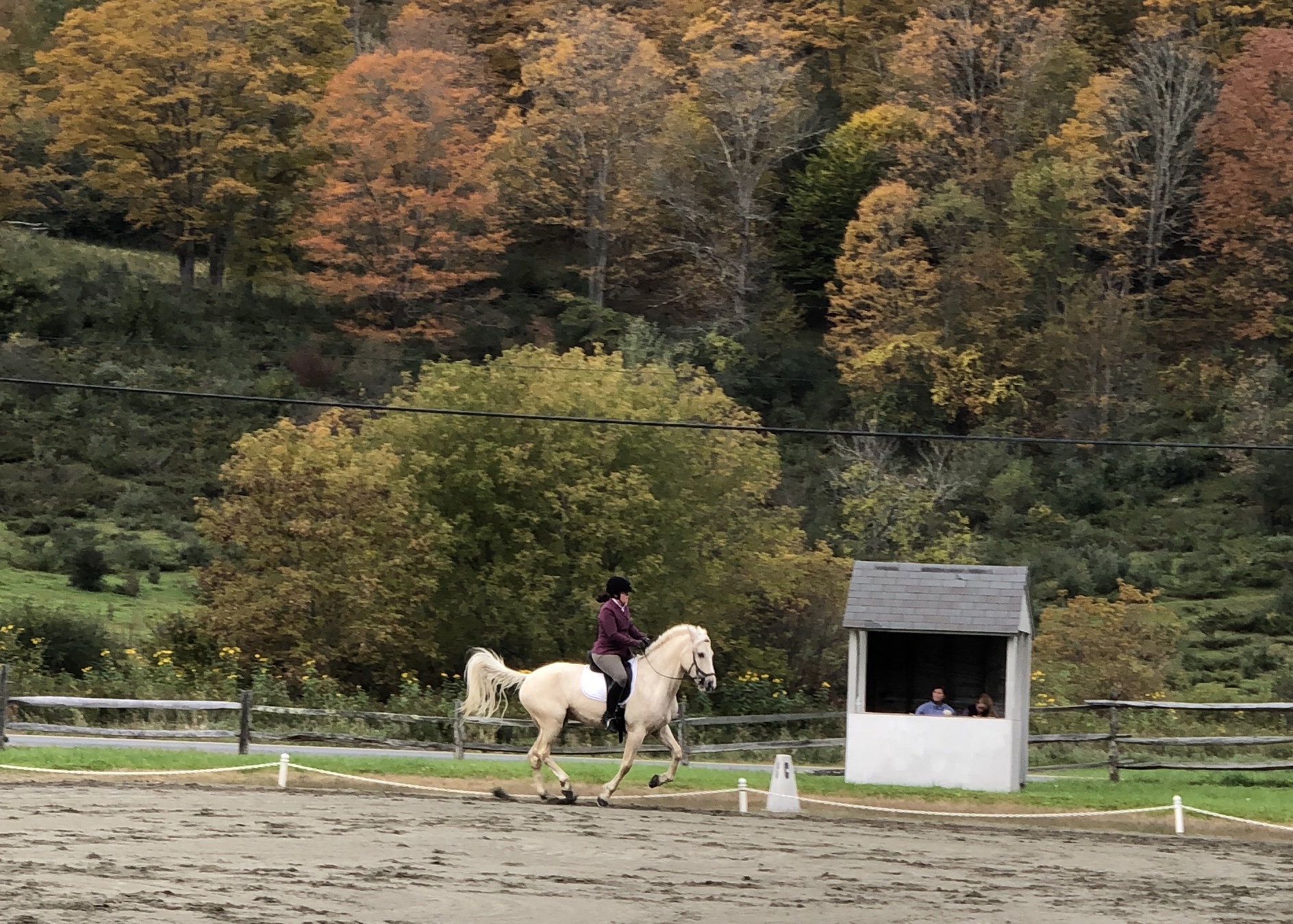 Final comments were “work for consistent connection and engagement of hindquarters to help keep him from getting behind the vertical.”Levi hates – HATES –  going on the bit. He loves to evade it in various ways, but I didn’t have the impulsion or responsiveness that I needed to engage the hind end. It was a little frustrating to suffer through the whole test with an issue I have a solution to (spurs).  I would have liked to have gotten dinger on some of our many other issues. It wasn’t w=our worst test, but not really what we’re capable of either. 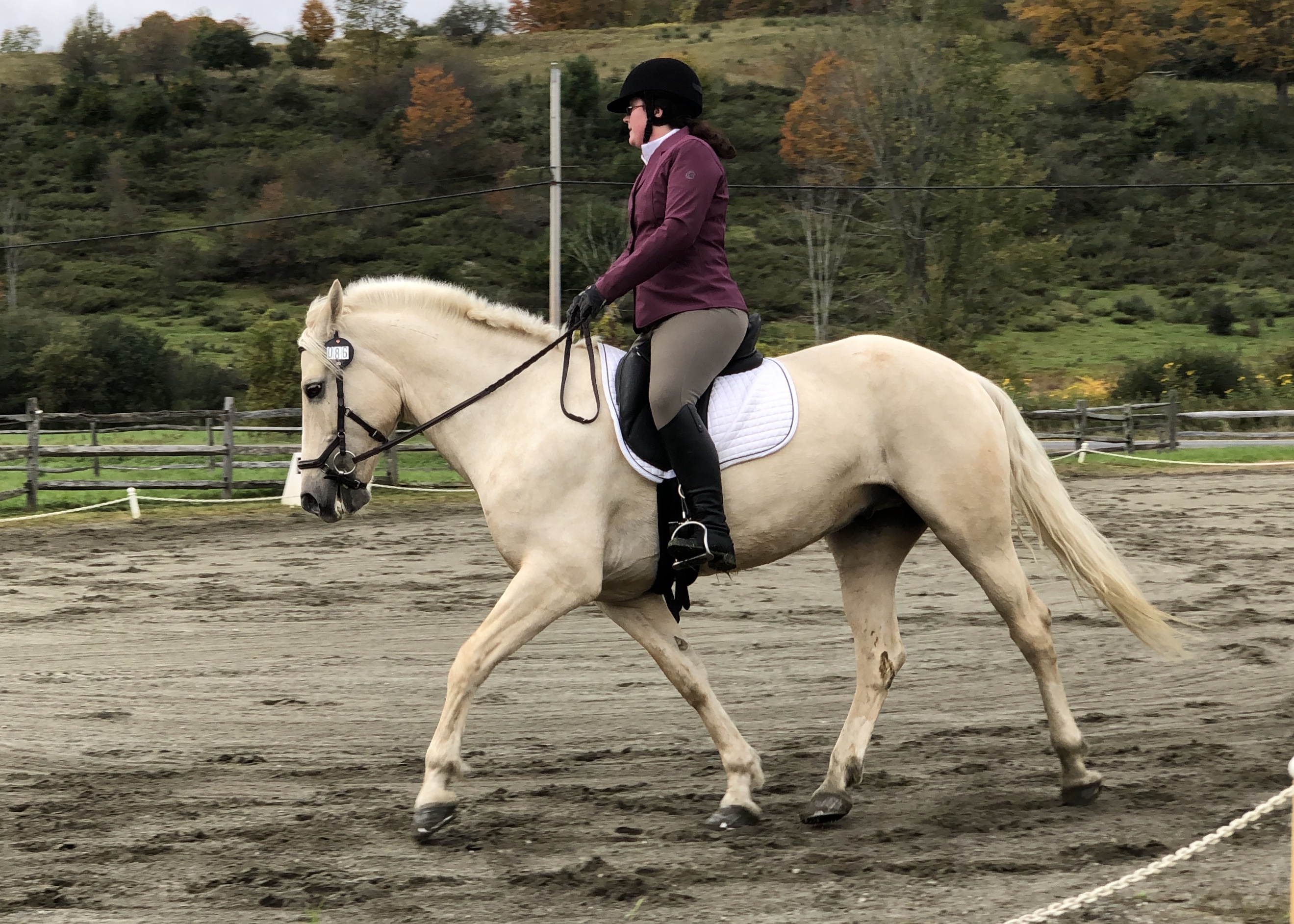 Because of the long walks back and forth, I ended up not having enough time to walk the course. I really didn’t enjoy my experience running XC blind in Coconino and vowed to not do that again, but I didn’t have much choice. I looked at the map: 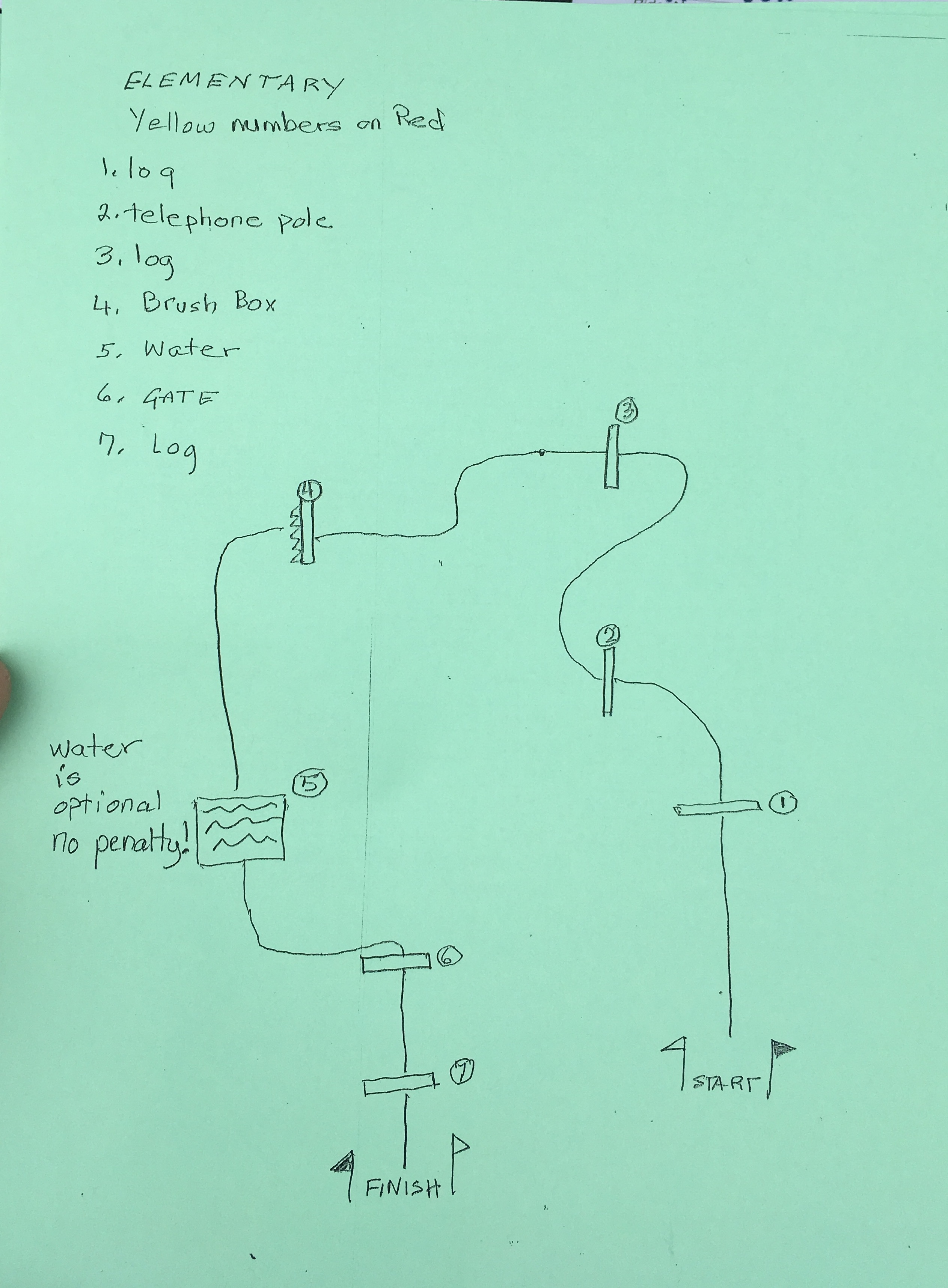 I could see numbers 1, 2, 6, and 7 from the warm up area. They were all pretty small and the course wasn’t timed so I figured I could wander around if I had to. We popped over a few warm up jumps and then it was time to go: 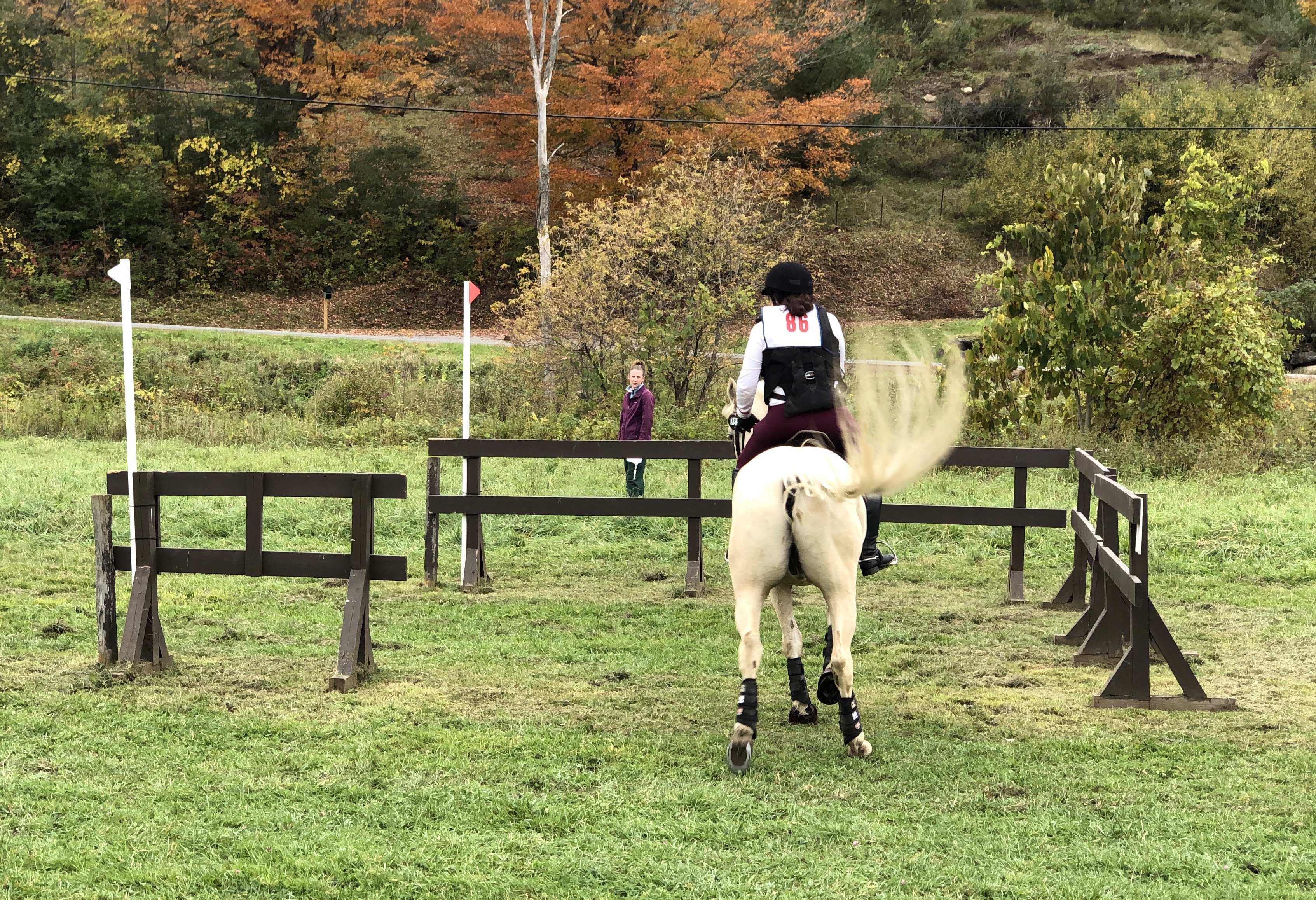 the tail action powers him

The first jump was a super tiny little log: 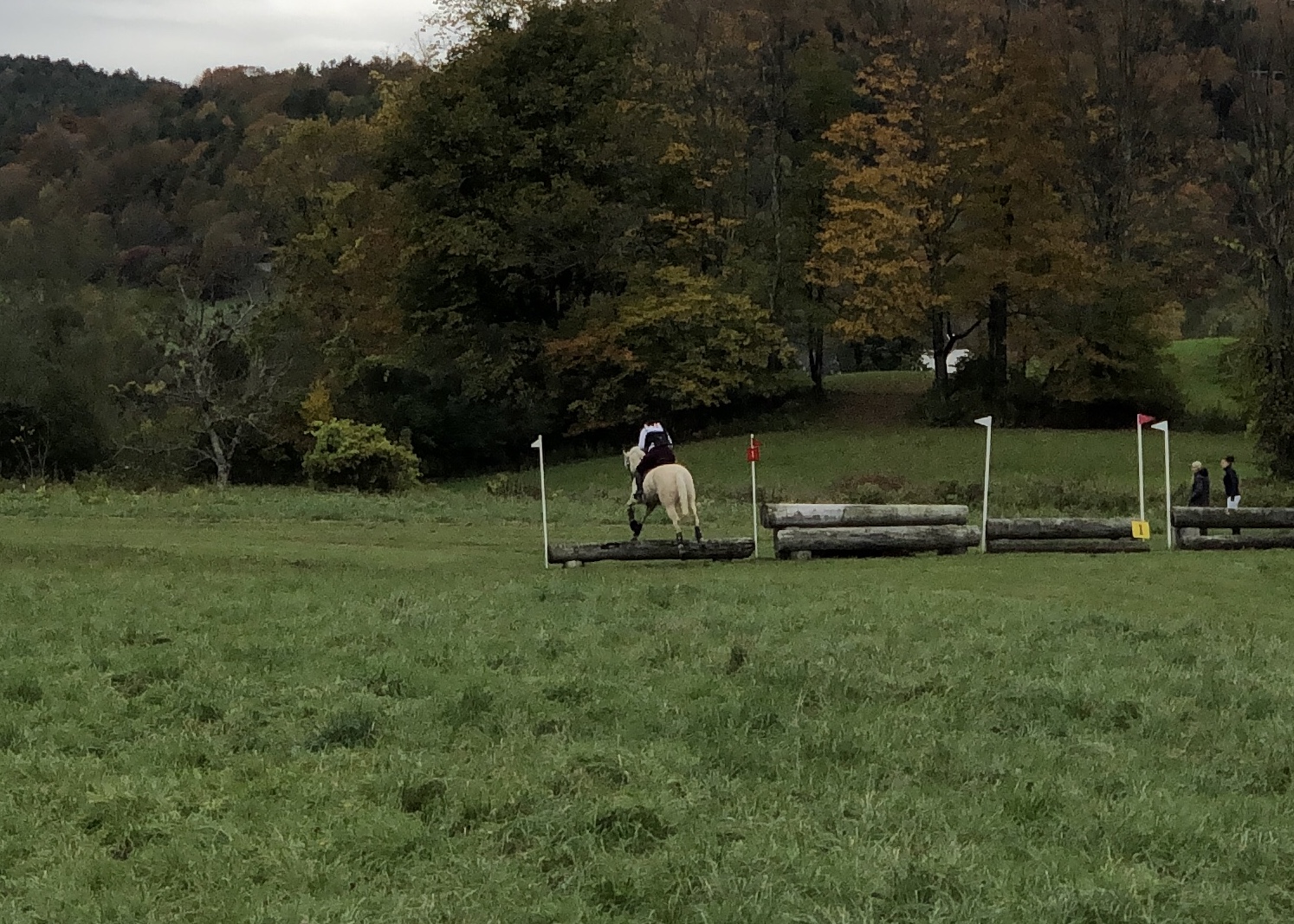 The second jump was significantly bigger – probably twice as big as the first and bigger than I thought from across the field –  but it was fine: 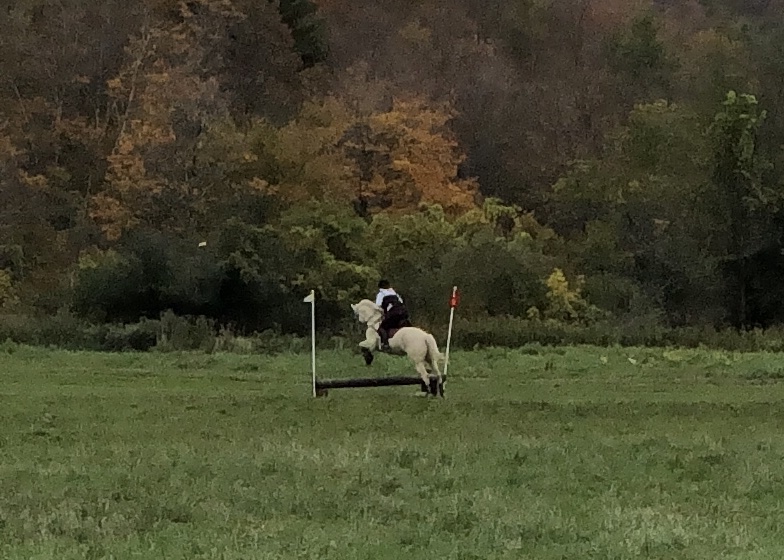 The 3rd jump was rather awkwardly located. I had to go through a break in the trees, make a right turn, then go around all the other levels’ jumps that were in a line to find my #3 perpendicular behind them. After #3 the course stopped going through the fields and followed a wide path through the trees. There was a steep hill right after #3 and then a little sign pointing left for Elementary. Just what I needed: directions! We galloped up the winding path strewn with fallen leaves like a golden road through the forest. It was so pretty and it was really FUN. I think it’s the first time I’ve had fun on XC in years.

We crested a hill and found jump #4 which was a rather large brush box. Levi was completely distracted by the jump judges and I was yelling at him to look at the damned jump, but he did turn his head about a stride out and manage to get us over it. Sadly, what goes up must go down and we had to descend a steep hill to the water. Levi’s not too great on his feet on level ground, so I made him walk down the hill, which I think was a good call and he slipped a bit. Unfortunately, that meant we had no impulsion going in to the water. He did stop, but never backed up and we sort of sidestepped into the water and through. 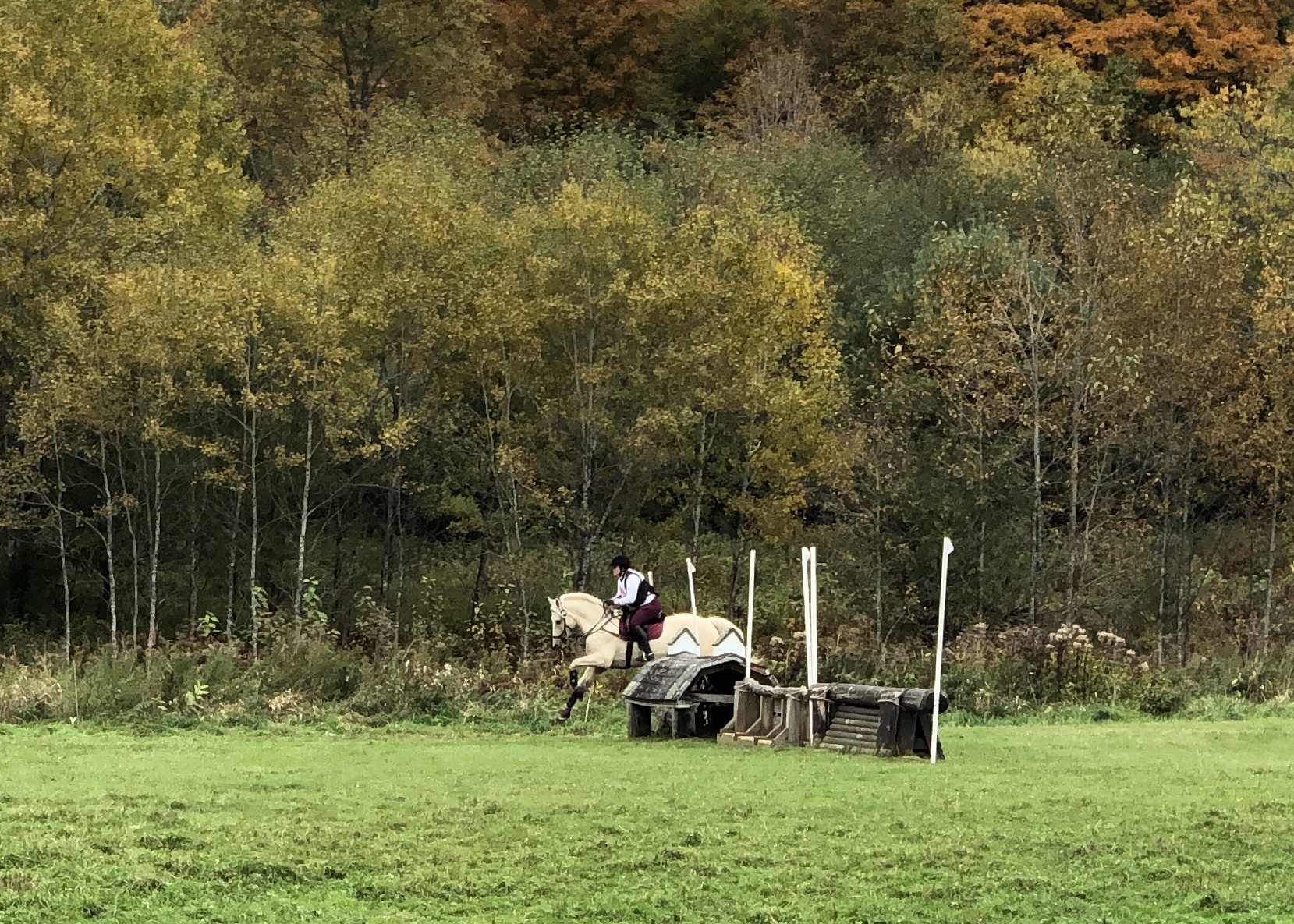 Then we were through the water and on to the last two jumps. Levi was cruising at that point and we popped over them nicely. My husband and I had to hurry all the way back past parking to get to Stadium and as we passed the dressage warm up, the ring steward asked how it went and I said it was fun.

We trotted over to stadium where I asked if I could go first so we could get back to XC because my husband’s time was really close to mine. Although we had just jumped XC, I decided to pop Levi over a warm up jump just to remind him what we were doing and it was a good thing I did since he slammed to a stop and then jumped it from a stand still because apparently the jump was new and different and needed examination. 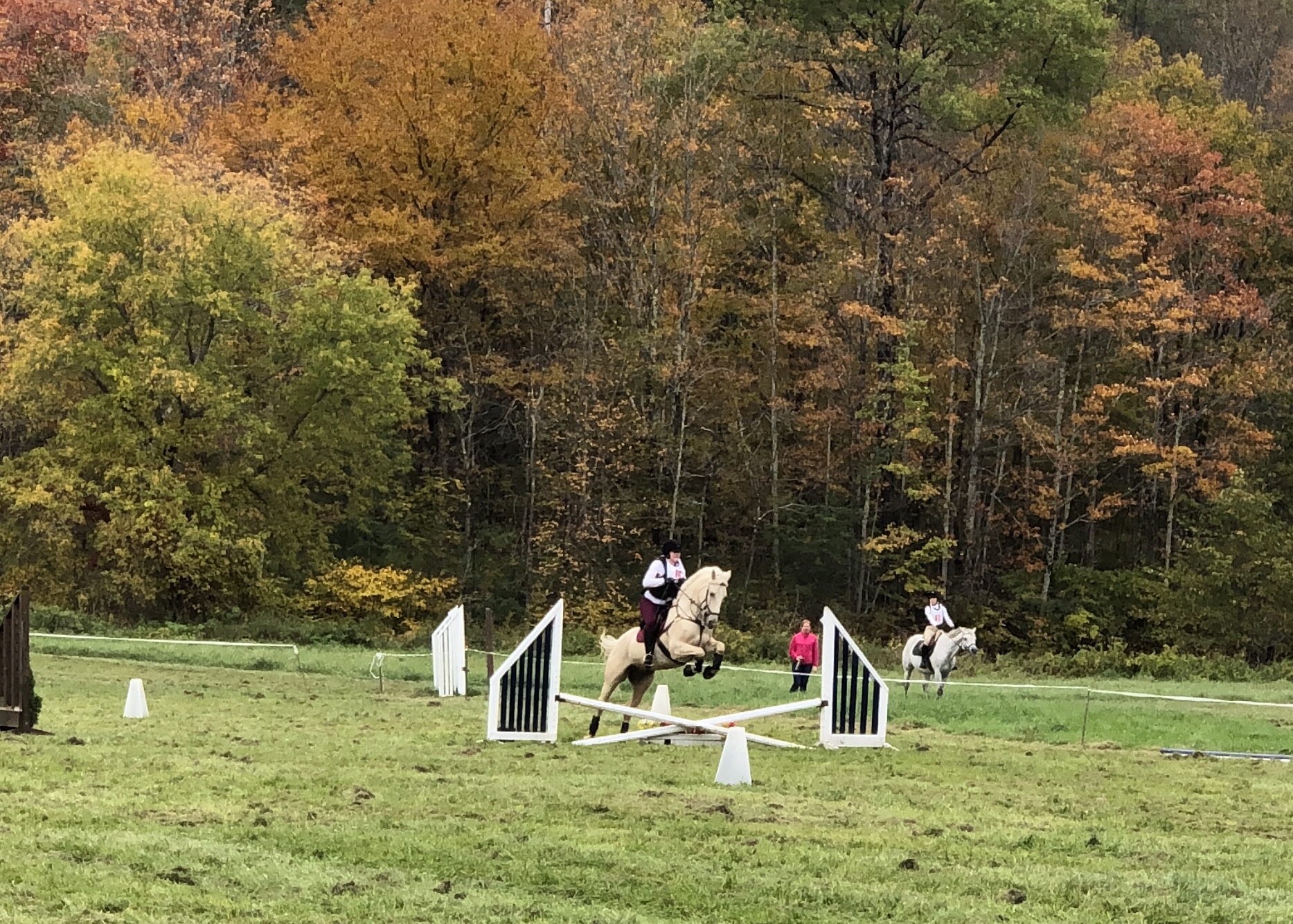 The first jump on course was thankfully a little cross rail, as Levi still felt like colored sticks might be out to get him. He built into more of a rhythm as we got going: 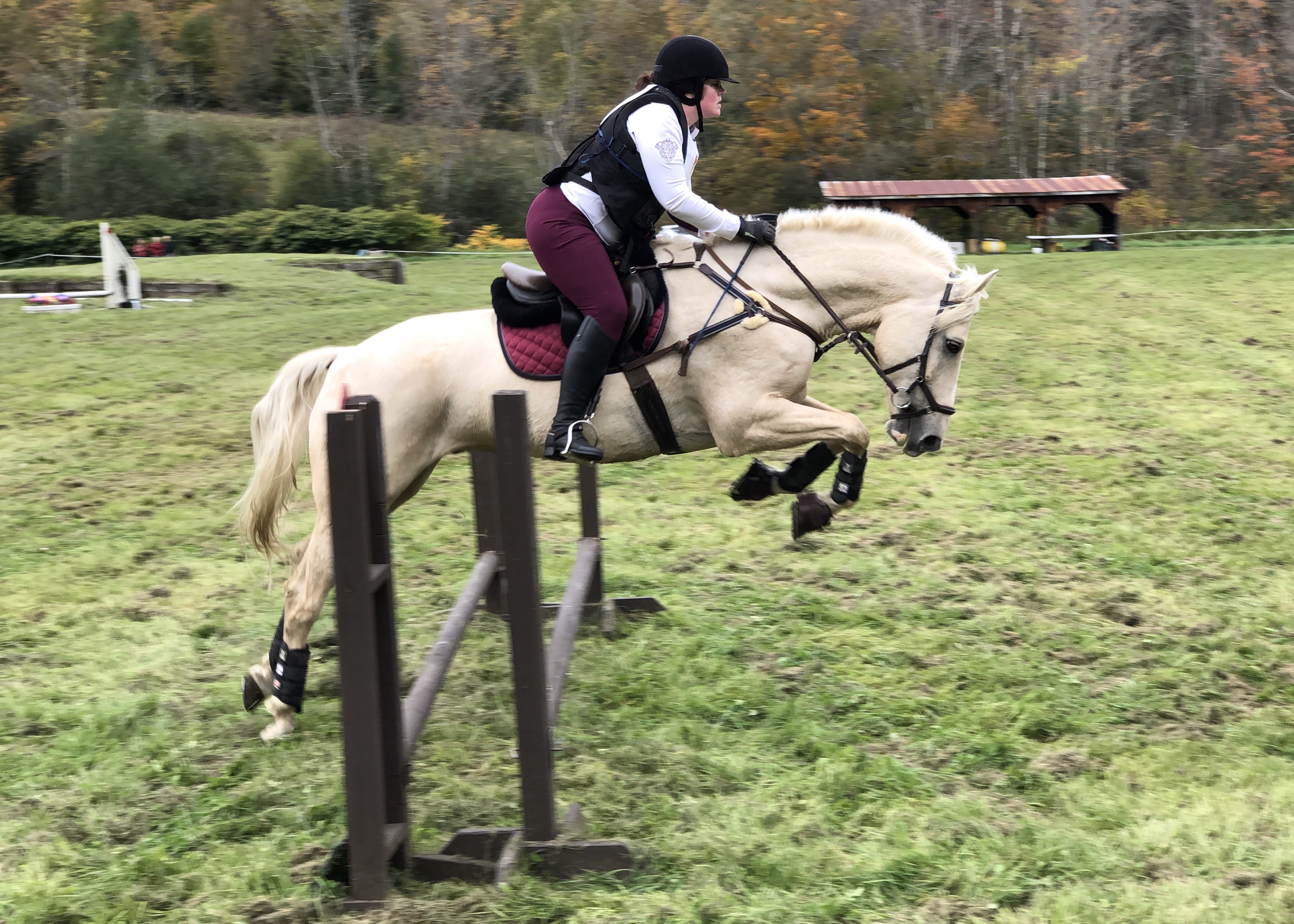 The jumps were all small enough that Levi could clear them even when he got in too close, but there was a nice variety of jumps for the level. I’d love to compete at higher levels, but the beginner levels are really working for me right now and I really appreciate having oxers and filled jumps instead of just a see of crossrails at the lower levels. Besides, Levi makes the jumps higher all on his own. 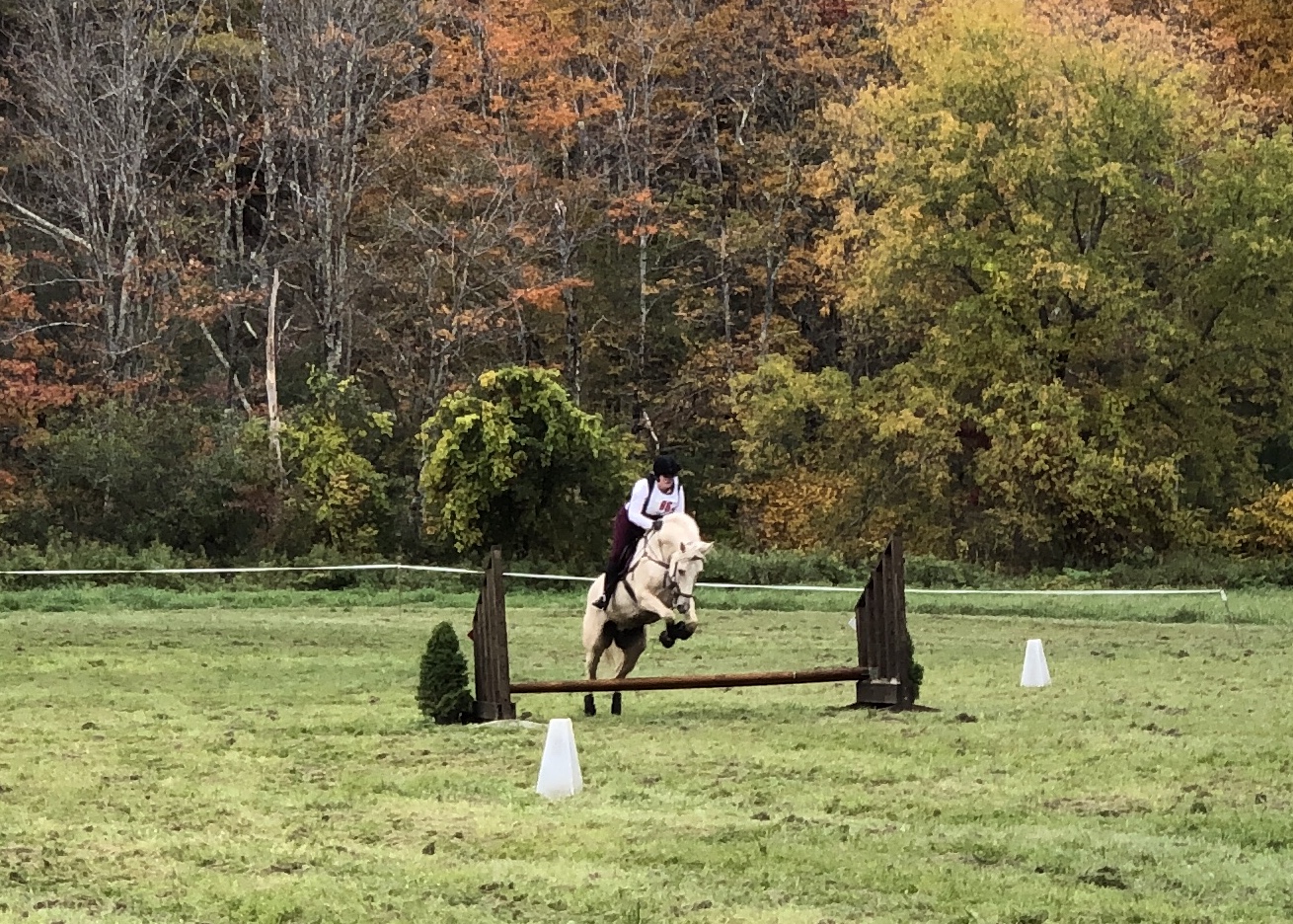 We were double clear for both XC and stadium and moved up to 1st place from 2nd. The ribbon and little prize bag were awesome, but it was really great to enjoy an event. This is the first time in a long time that I haven’t been a completely panicked wreck going in to the jumping phases of an event. it’s also the first time I’ve ever ended XC saying “that was fun.” I’m looking forward to competing there again in the spring.