As I mentioned in my previous post about the schooling show last weekend, there was a bit of confusion regarding our sign ups. When I logged in, my screen showed me signed up for Training 1 and 2, but apparently I had never fully submitted the entry and didn’t show up on the schedule when times were posted. My husband hadn’t submitted his entry because he though the entry date got extended a week when the show got moved, but that was not the case. He called and then emailed his in and was on the dressage schedule, but I wasn’t. After another quick call to the show manager, we decided to go to the show in the morning and see if there were any scratches. I could always do the ticketed rounds and take one of my husband’s tests if needed.

My training 1 test was supposed to be at 12:36 and we went over to the arena around 12 to warm up. The warm up was super tiny, but this dressage warm up is always this small and I’ve never had an issue before. On Saturday, there were just way too many horses trying to work in what is about a 10m by 25m space. There’s usually a big arena that the hunters use for their warm ups that’s often only got a few horses in it. I tried walking over there, but it was closed. I returned to the tiny dressage warm up and got Levi moving around a bit, but there wasn’t much we could get done in such a small space and some of the horses were handling it less well than others. One horse was repeatedly rearing, jumping, and bucking. I felt really bad for the rider though she was doing an excellent job trying to control him. Levi wasn’t getting worked up by any of it, but I really didn’t want to be in the way and I couldn’t get any useful practice in so I just went and stood outside of the arena. The steward ending up coming over and asking me if I minded going early and I was like absolutely; I’d love to get done and get out. 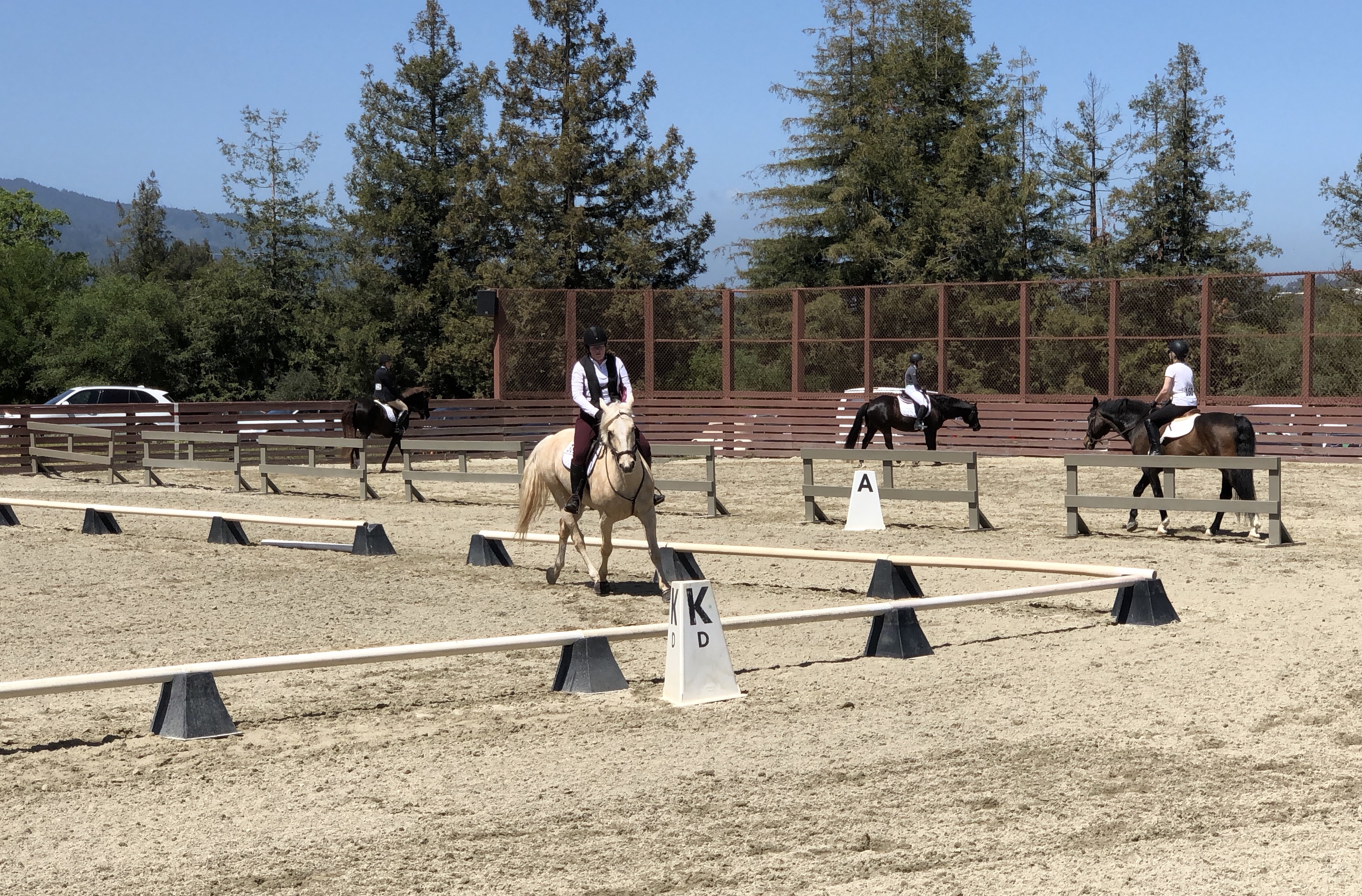 warm up ring behind us

Of course, we really could have used actual warm up time. Especially since he was coming off of jumping as his last activity even if it was an hour ago. He was in a very zoomy mood and we didn’t get an opportunity to do any canter work before the test. We went in, halted (I actually remembered this first halt this time #eventerproblems), turned left and he broke to canter. 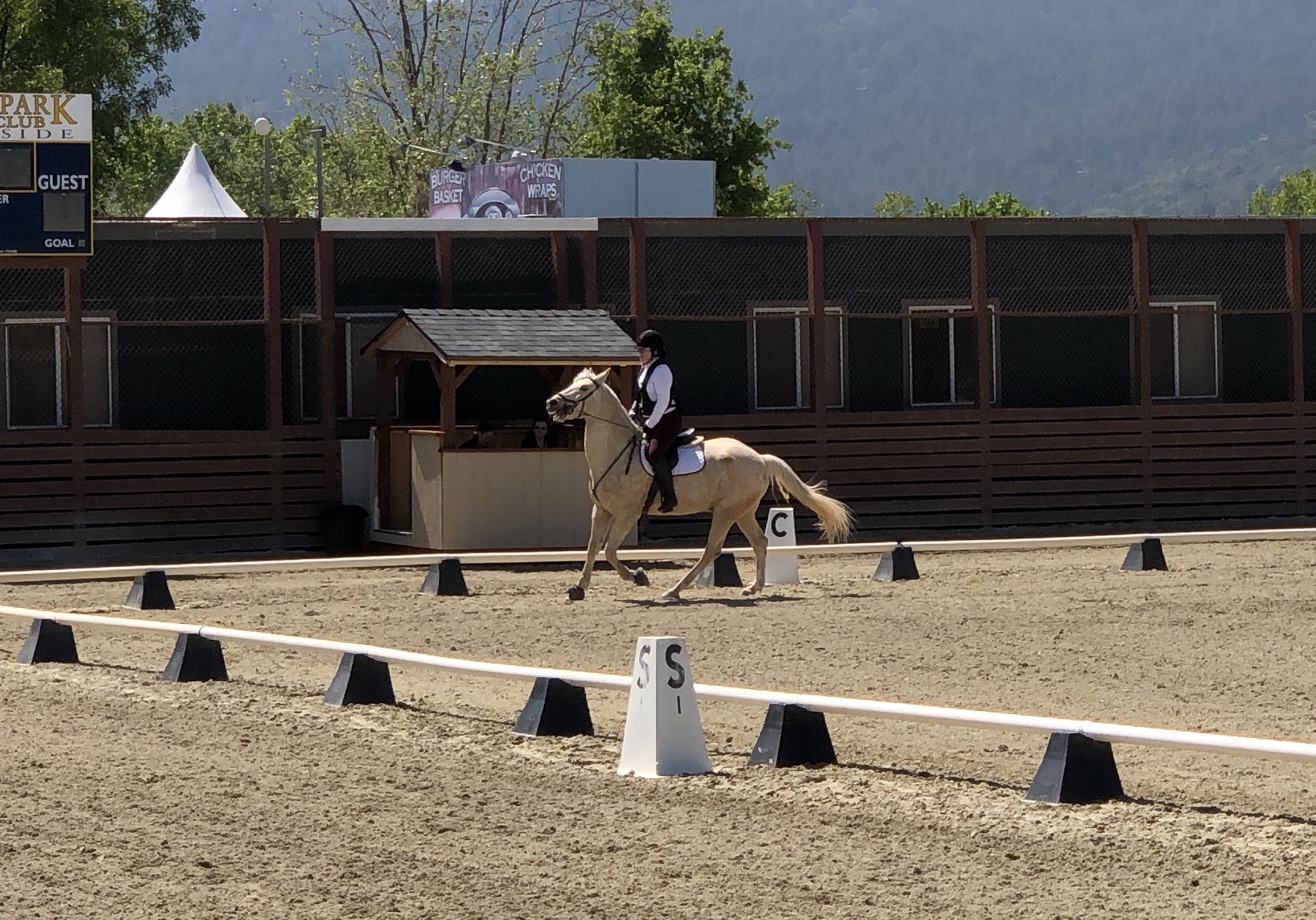 The judge somehow did not catch this or just didn’t mark me for it. Then we did our trot circle and he broke to canter again. We got dinged for that one. No picture was captured of that canter, but here’s some upside down trot to admire: 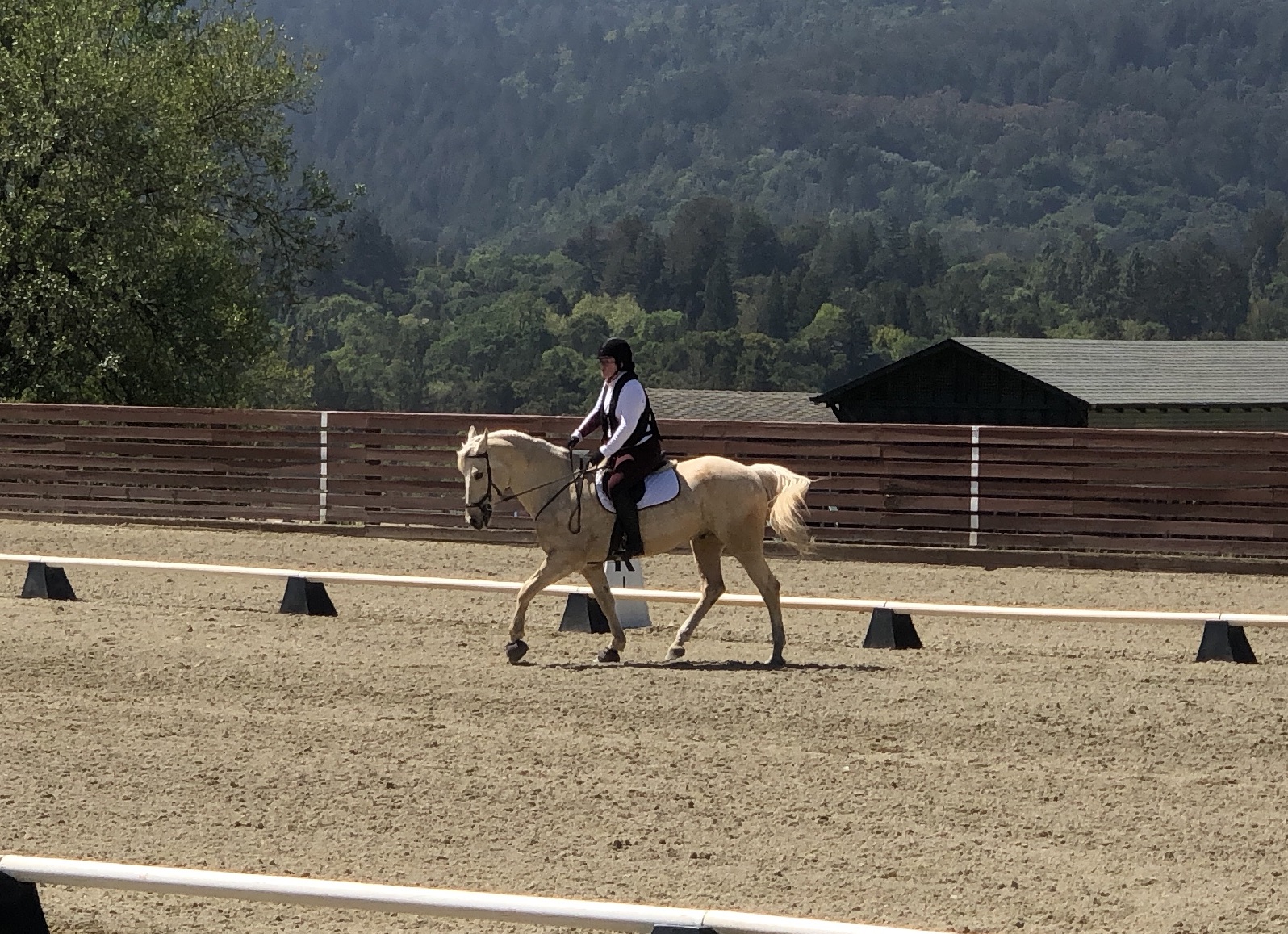 When it was finally time to canter, he was very tense about it and we got “above the bit” for the transition. 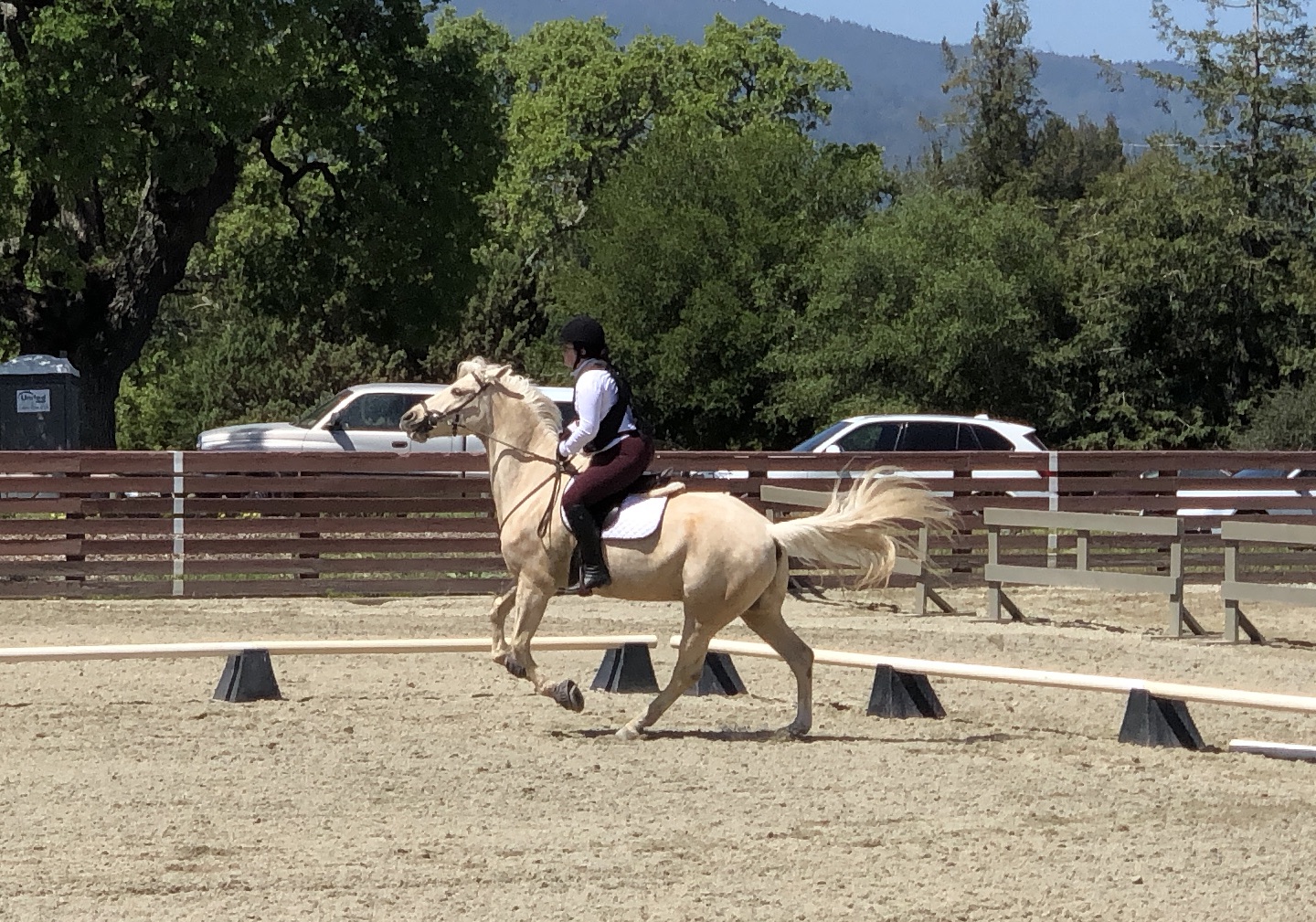 The judge loved his canter though and commented on his “expressive stride.” He is a pretty asshole. 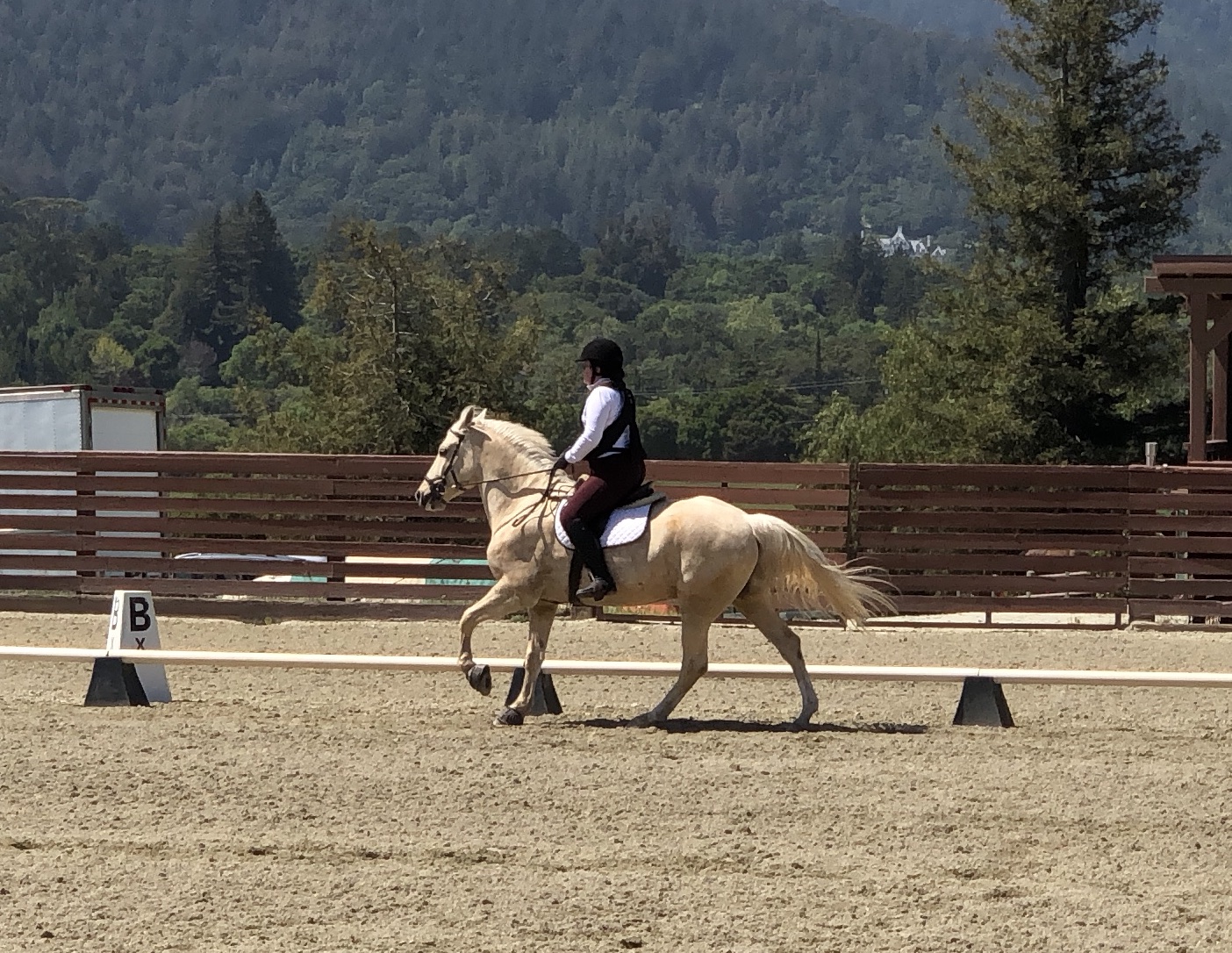 Free walk was good – Levi likes free walk and we managed not to canter during it so that was a nice bonus. 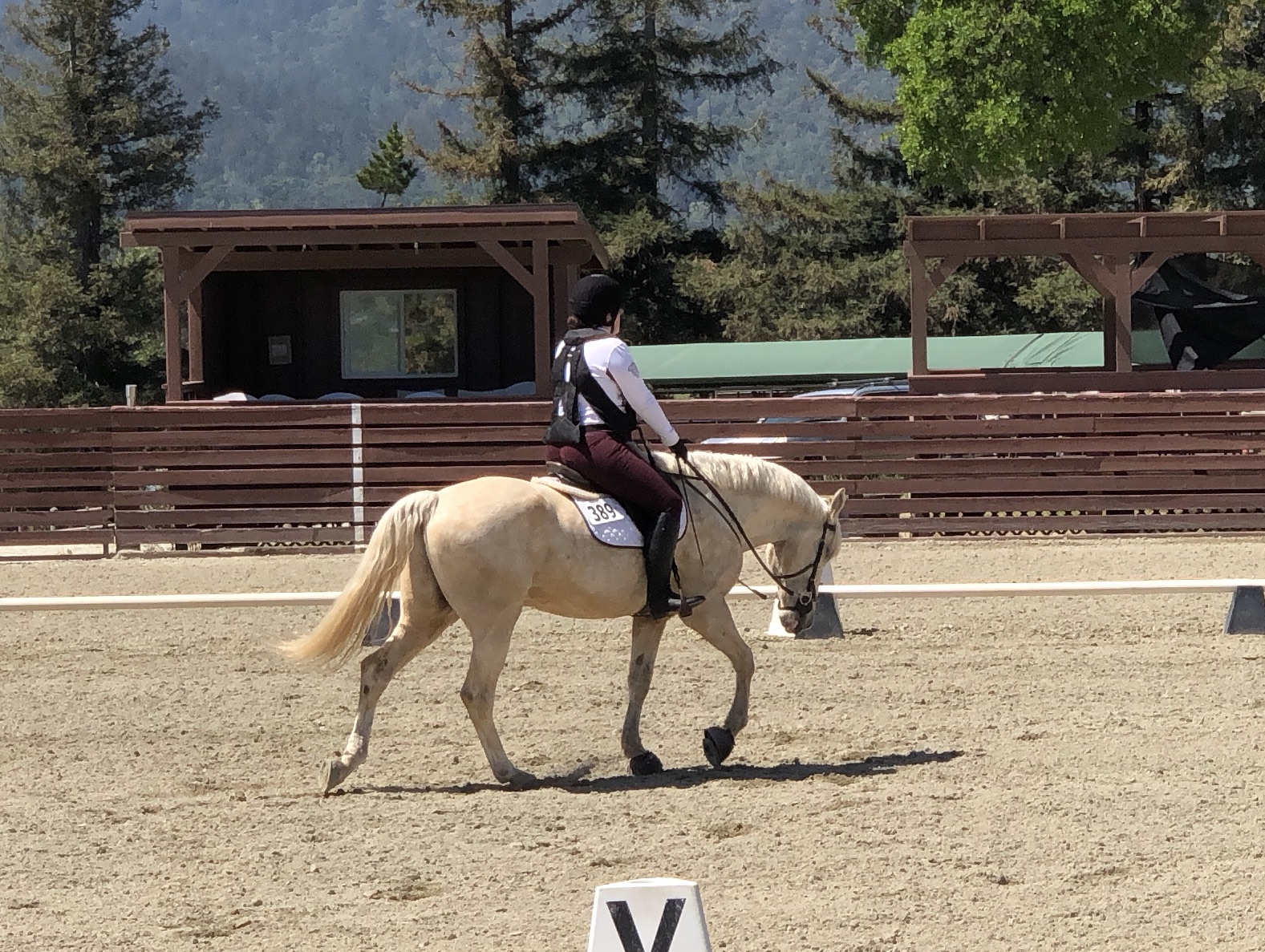 We cantered to the right on the correct lead although the judge remarked on him tossing his head and being disobedient about the transition. Whatever. I’ll take it over the wrong lead. 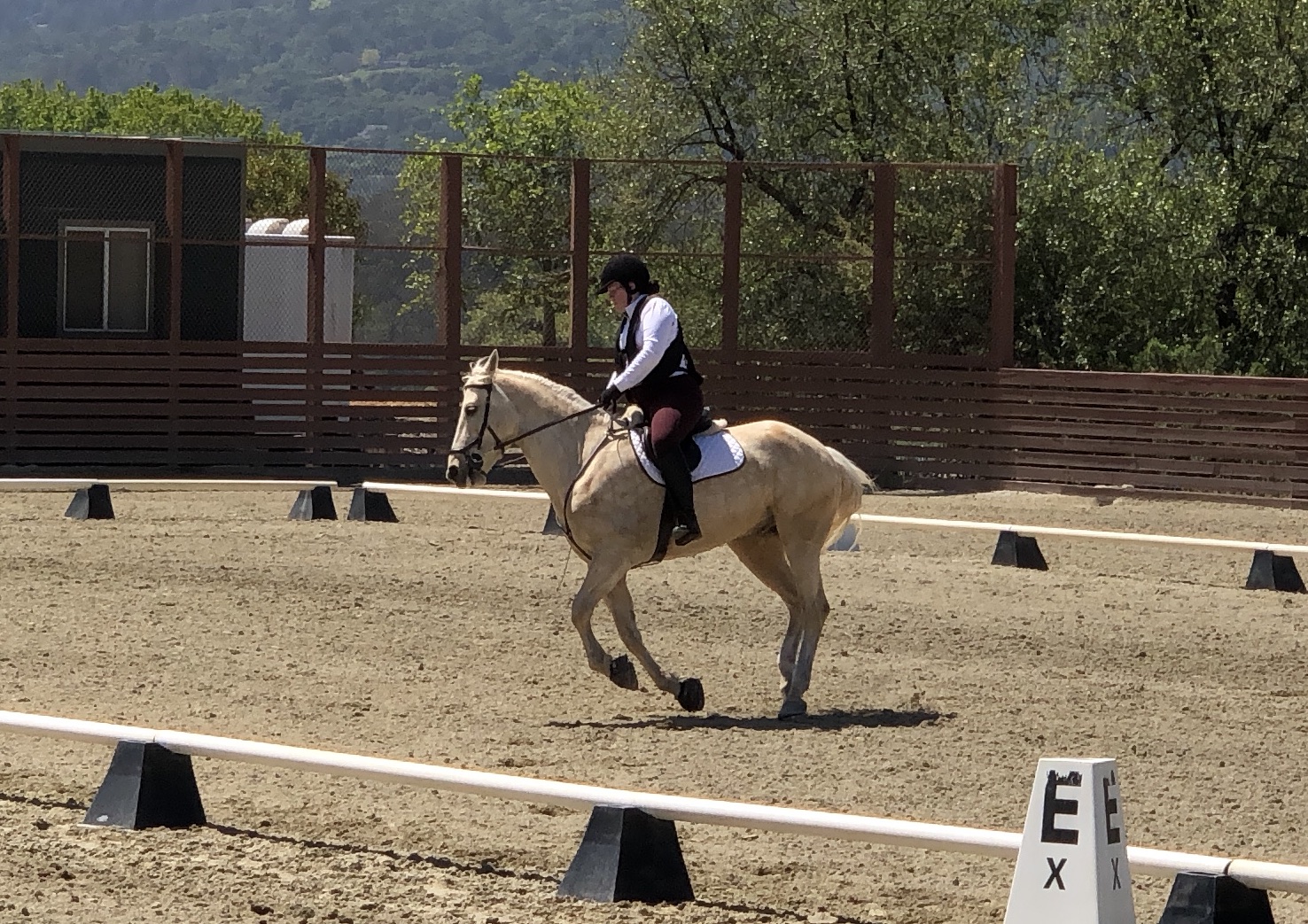 A while later we returned to the dressage arena for my husband and Eugene’s T1 test. I thought the test looked pretty good to me except that he went from canter to trot before B both times instead of after B. In the BN test, you trot before B and – despite my nagging him multiple times before the test – he forgot and thought he needed to transition before B. 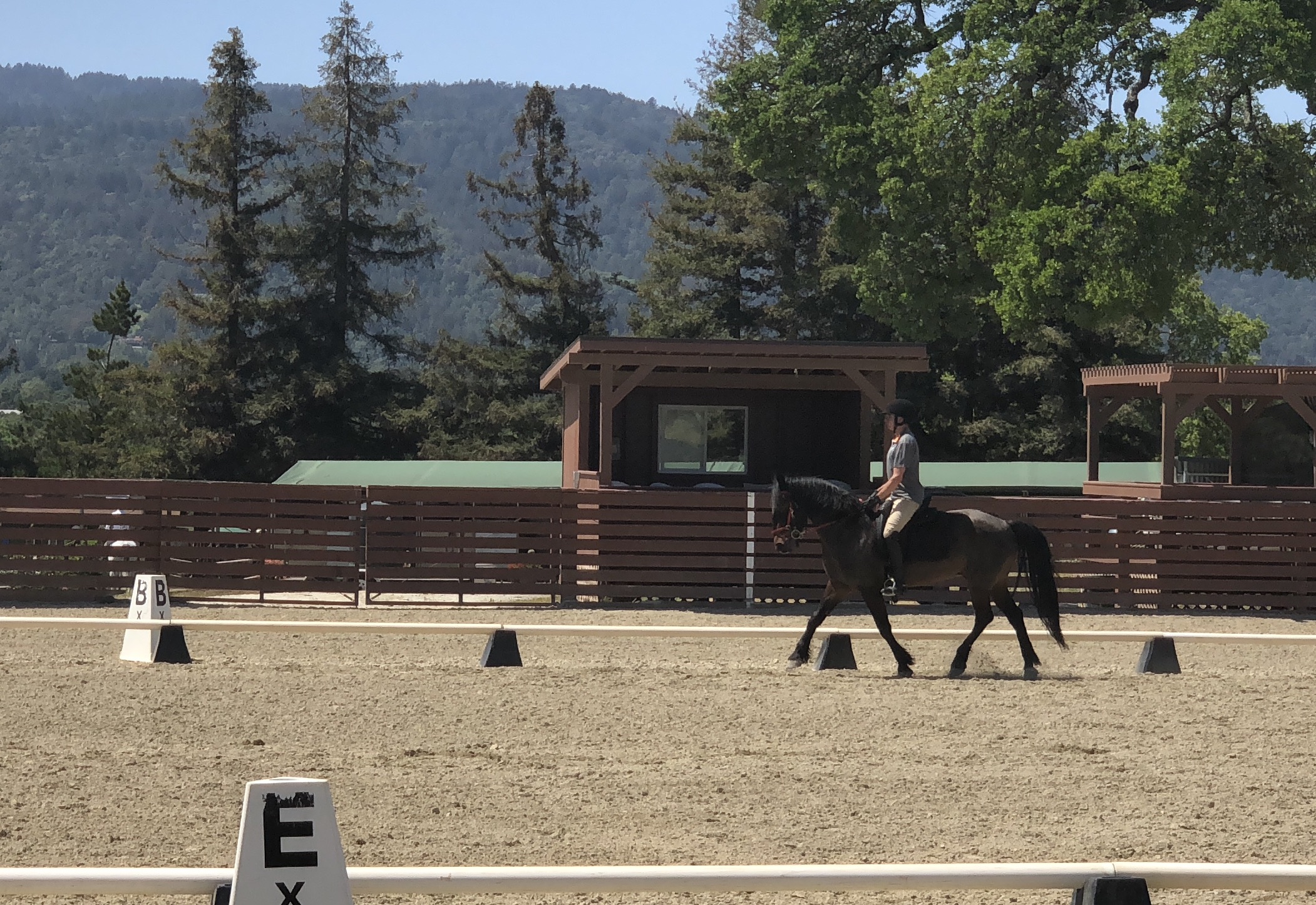 Despite trotting about a mile before B, the judge somehow didn’t ding him for this. I really don’t know how she could have missed it so maybe she also forgot? I have no idea.

The other issue they had that the judge actually got after them about is curling behind the bit. Eugene has gotten a lot better about being above the bit, but he’s very recently discovered curling behind the bit as an evasion. He’s particularly trying it in canter and even more in circle than on the straight. 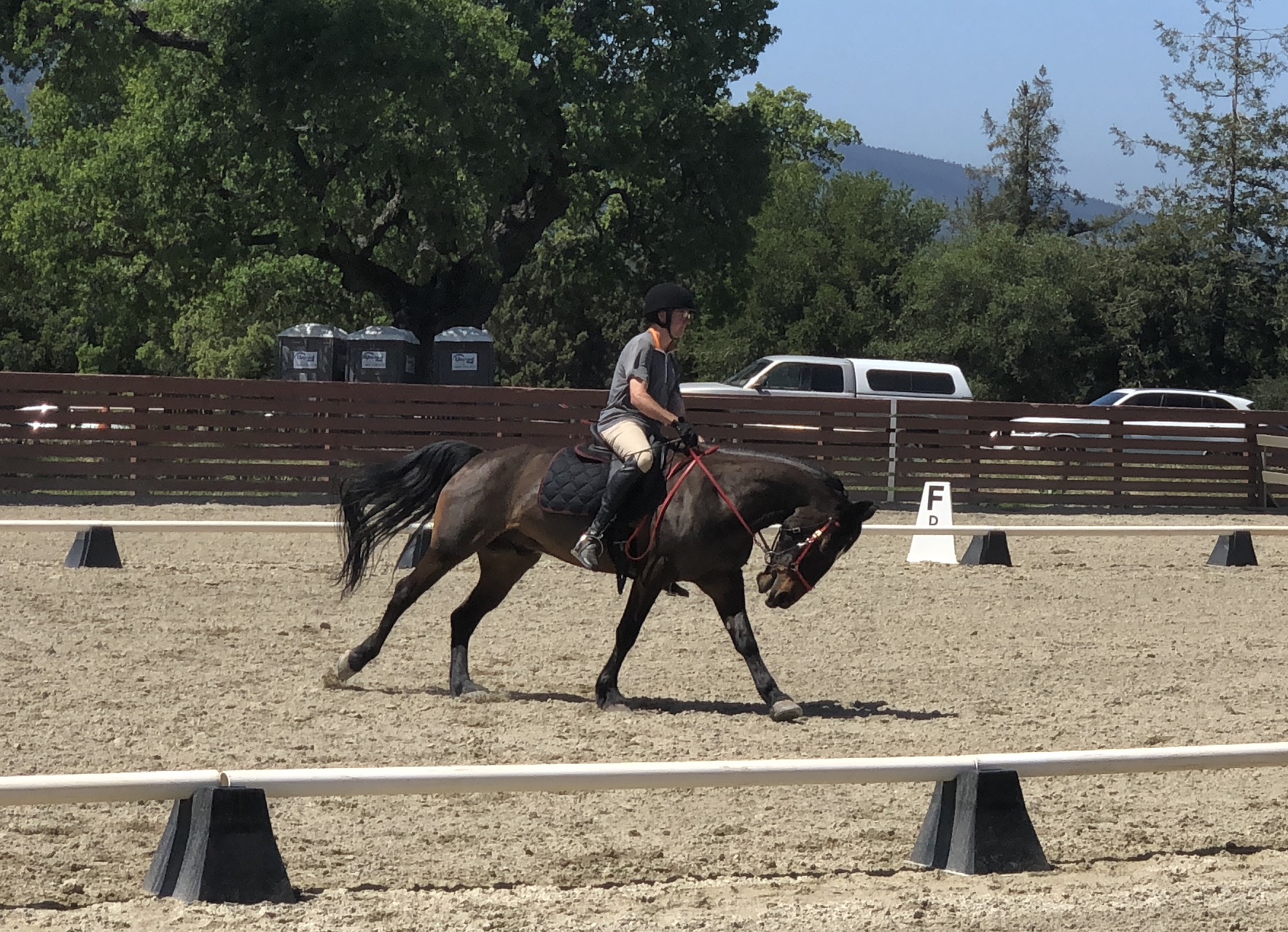 It’s not a pretty picture. They’re actively working on addressing this in lessons, but it’s a work in progress. They also got dinged for their first trot to canter transition where the judge commented ” double take on transition.” Looking at the pictures, I see why she thought it was a trot-canter-trot-canter transition, but I actually think he might have just gone gaited for a moment there. He is naturally gaited. We never let him work in the gait even on trails, but it’s in there. It comes out most when he’s trying to hustle off somewhere. 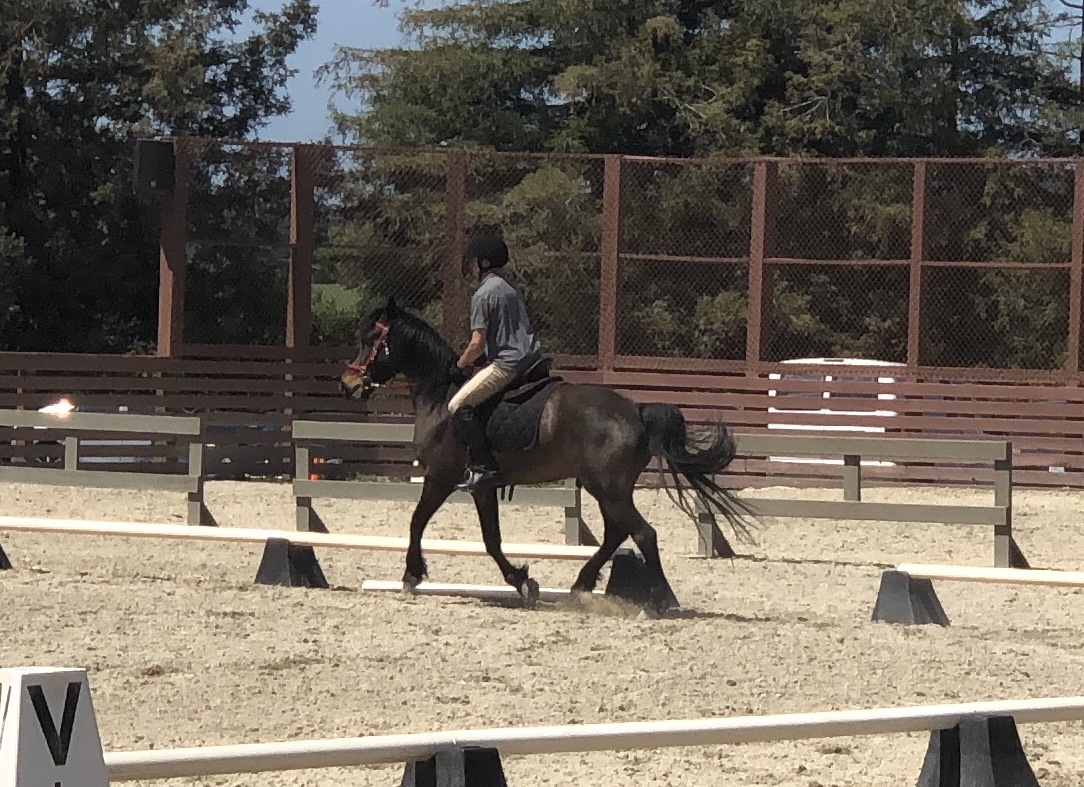 Either way it was not a pretty transition. My husband came out of the test complaining about how badly it went, but I didn’t think it was that bad. There were a lot of nice moments to balance out the bad. 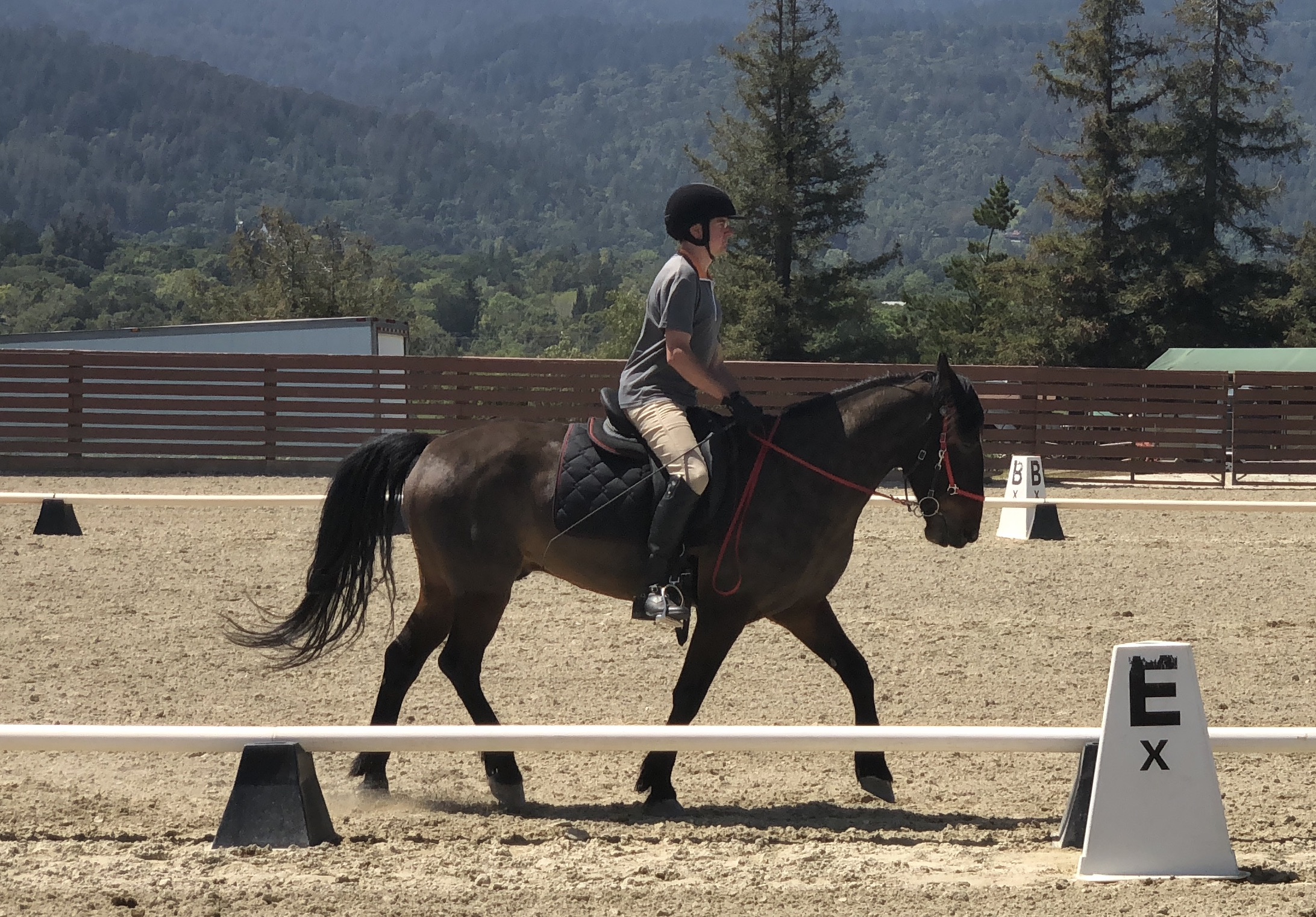 That’s right; we managed to get the exact same score despite having very different tests and scores on each movement. I ended up getting 5th and he got 6th. I am not actually sure how ties get broken in dressage so if any readers know, please feel free to chime in. I’ll cover the T2 tests in another post.