Because I’m still not done my post about dressage at the schooling show, I’m going to interrupt my schooling show posts with a trail ride post. My husband went hiking on Sunday and since I don’t do that, I asked around if anyone wanted to join me for a trail ride. The woman I sold Dijon to was excited to get out for a ride and we made plans to meet early the next morning to beat the incoming rain.

Levi can’t do strenuous trail work, but then neither can Dijon, so they were actually a pretty well matched pair. We decided to check out the new entrance to Calero County Park. I’ve ridden there before a few times and it’s a fantastic park with great trails and a huge equestrian parking lot. The new entrance was just opened a few weeks ago and offered access to some trails I’d never been on before. The entrance is so new it’s not on satellite. I was a little worried about the parking situation because I hate trying to get in and out of tight quarters with the trailer. Normally I google or even drive to a park first and check out the parking situation before trying it with the trailer. I didn’t have time for that this time, and just had to trust the park map which said there was equestrian parking.

Luckily, the was a huge trailer parking area. There were probably 5 other trailers there when we pulled up and there was room for a bunch more. It was such a gorgeous day, I think everyone wanted to get out before the rain returned. The car part of the parking lot was basically full it was so crowded.

We tacked up and hit the trails with a plan of riding out to the reservoir and then around in a loop back to the parking lot. From the parking lot we took the Cottle Trail to the Lisa Killough Trail. 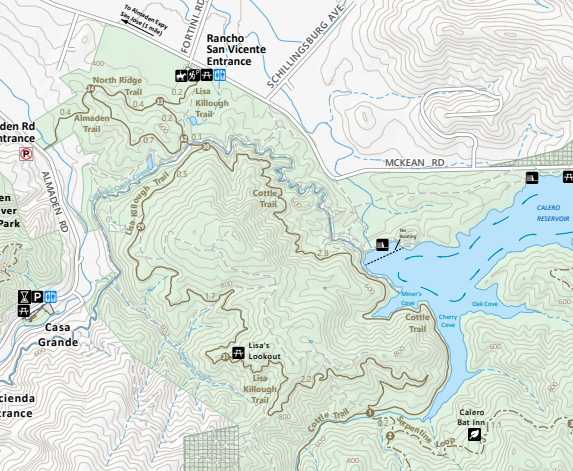 There was a nice, big water trough right before the Cottle trail diverged (marker 30 on the map) and we let the ponies tank up although Dijon mostly just splashed water all over the place. 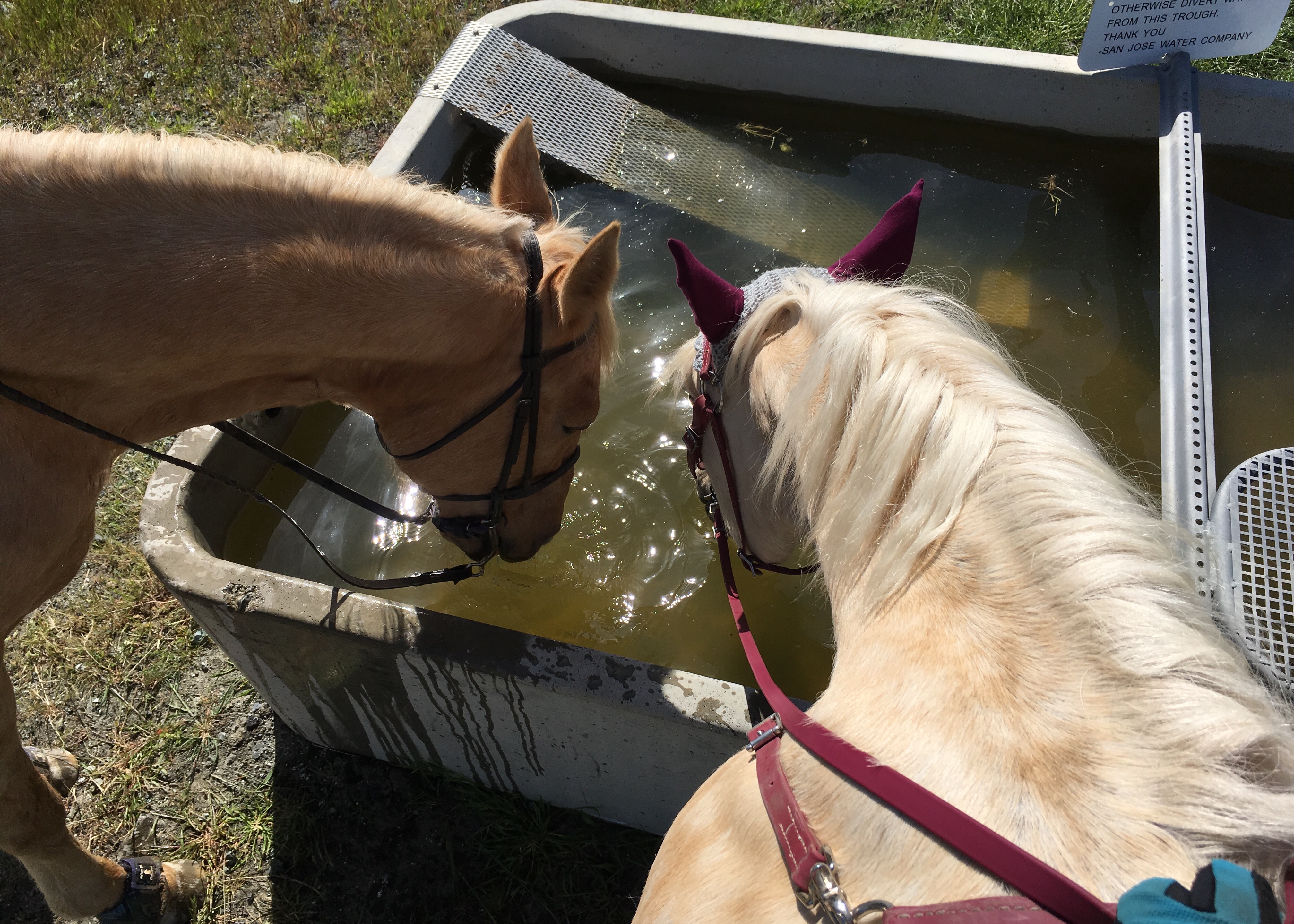 The trail was great. It was wide and mostly level and it hugged the hill in the middle instead of going up and down it. We kept it at a walk the whole way since Dijon’s not in shape for much and Levi shouldn’t do hard work on hard ground. This trail was groomed and with very few rocks so it would be a great conditioning trail for endurance riders. As we came out of the trees, the views of the reservoir were beautiful. It was such a gorgeous day out with bright blue skies and everything is still green from all the rain. 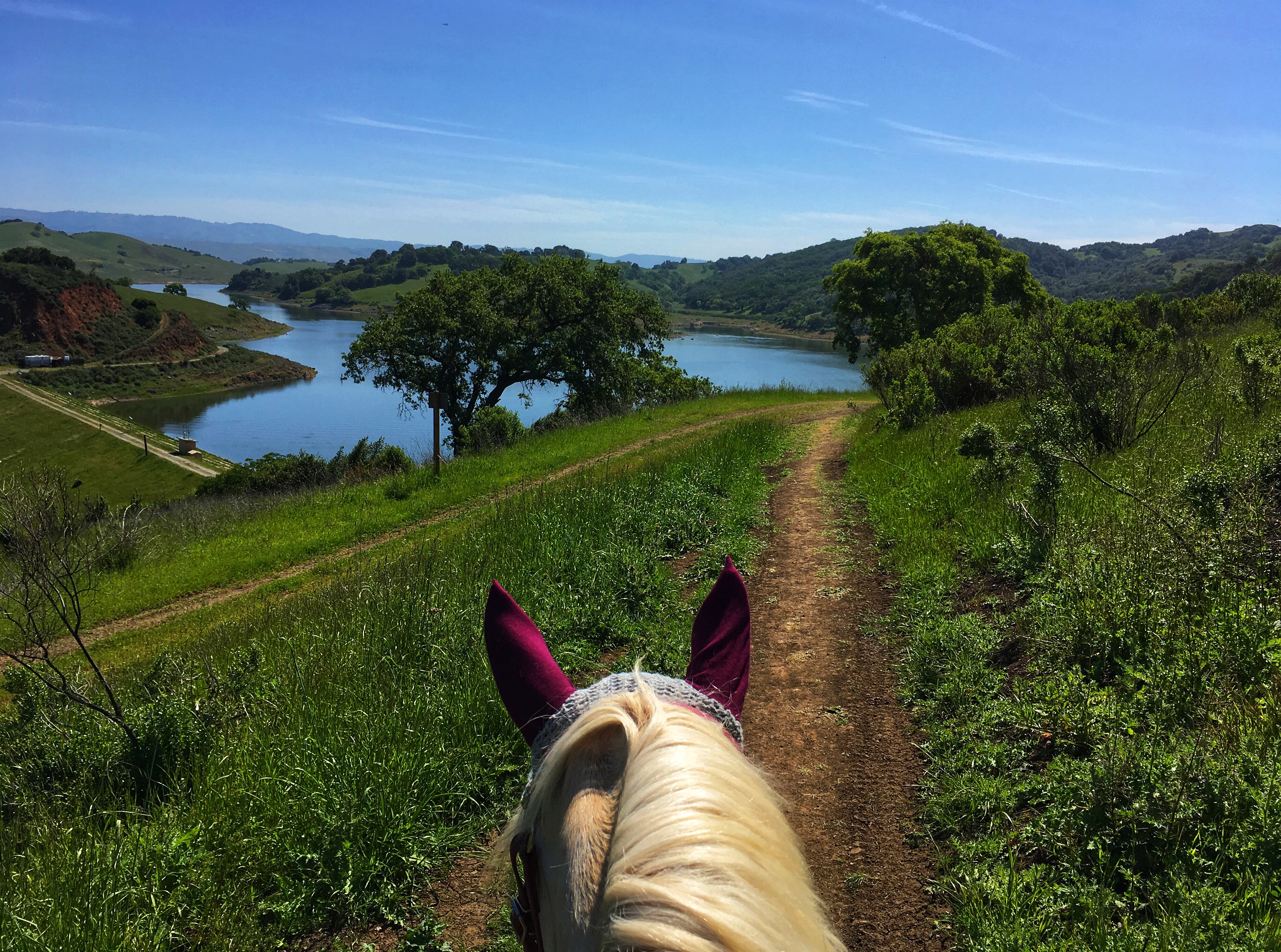 I haven’t seen such colors on a ride in a long time. The weather was perfect too: sunny, but with enough breeze to keep us from getting hot.

I haven’t been on this side of the reservoir before. The other side is further from the dam and looks a lot shallower and smaller. it was cool to see just how big the reservoir is and to see it looking decently high. 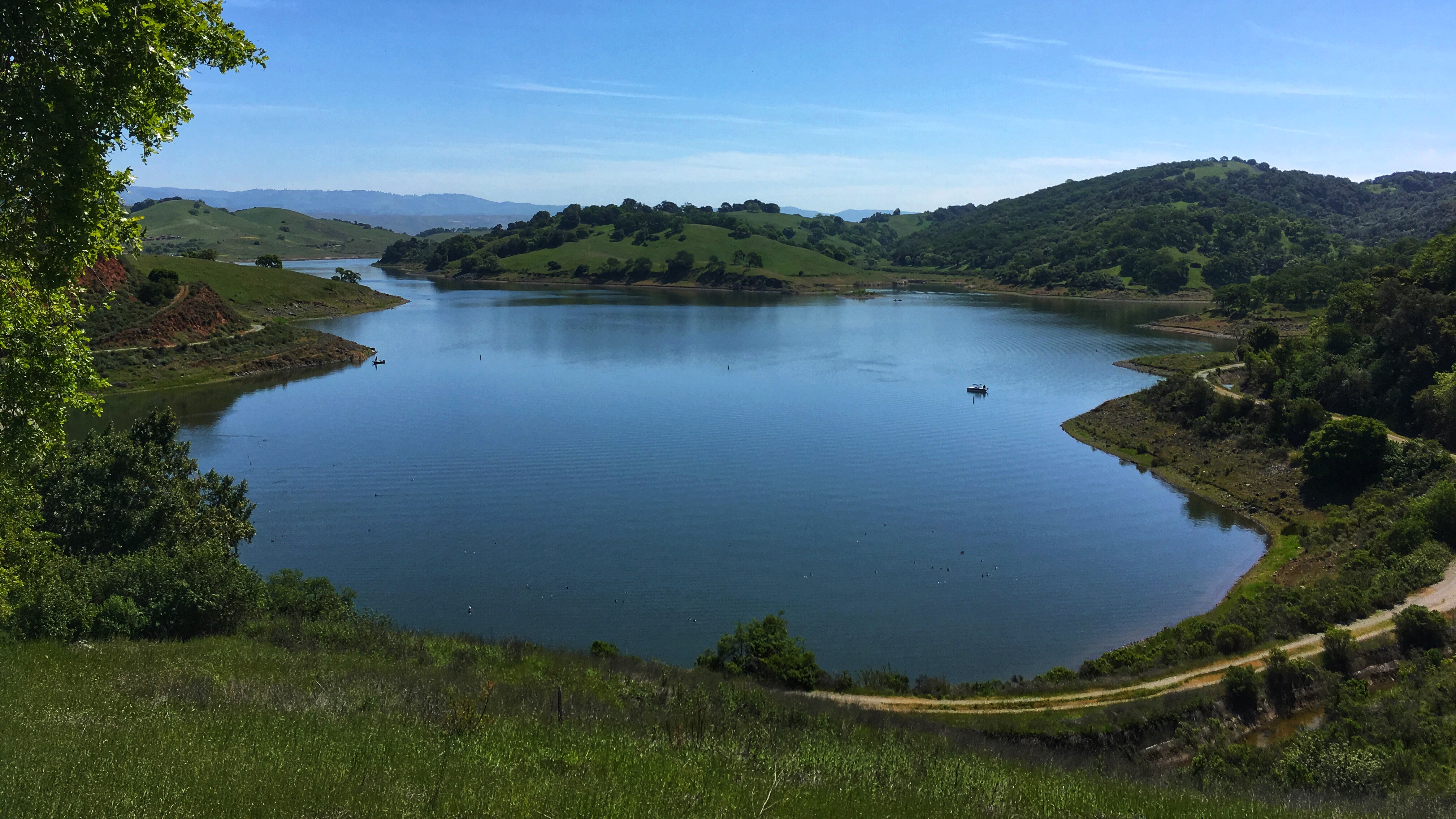 As we left the reservoir, we rode through a gorgeous grass valley. The breeze was blowing the grass like waves on the ocean. I love watching grassy hills on days like this. 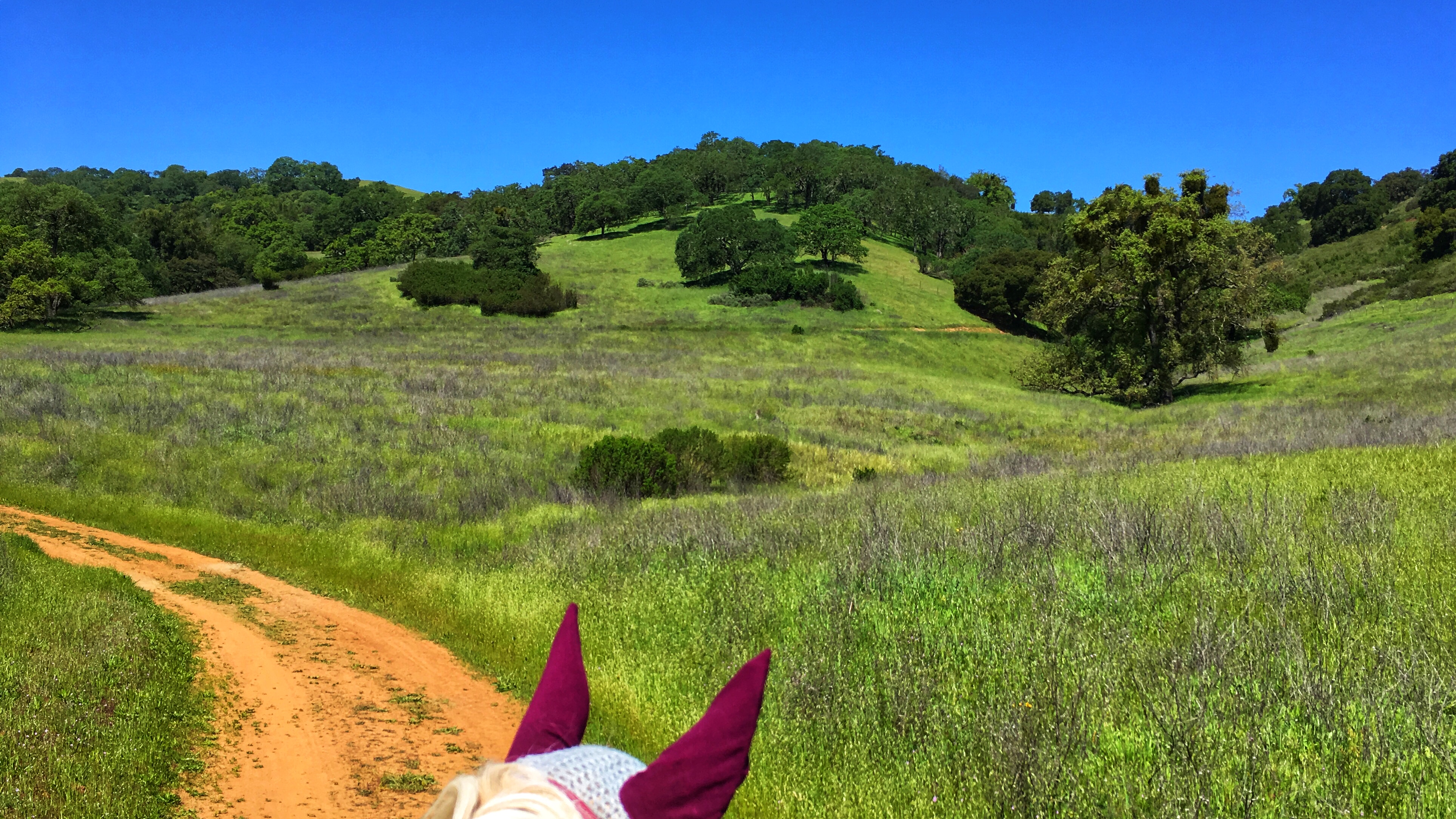 As we climbed slowly up hill a bit from the reservoir, the views were really cool. The hills blocked out any sign of human habitation. You could almost imagine that you were in the wilderness and not 20 minutes from the heart of Silicon Valley. 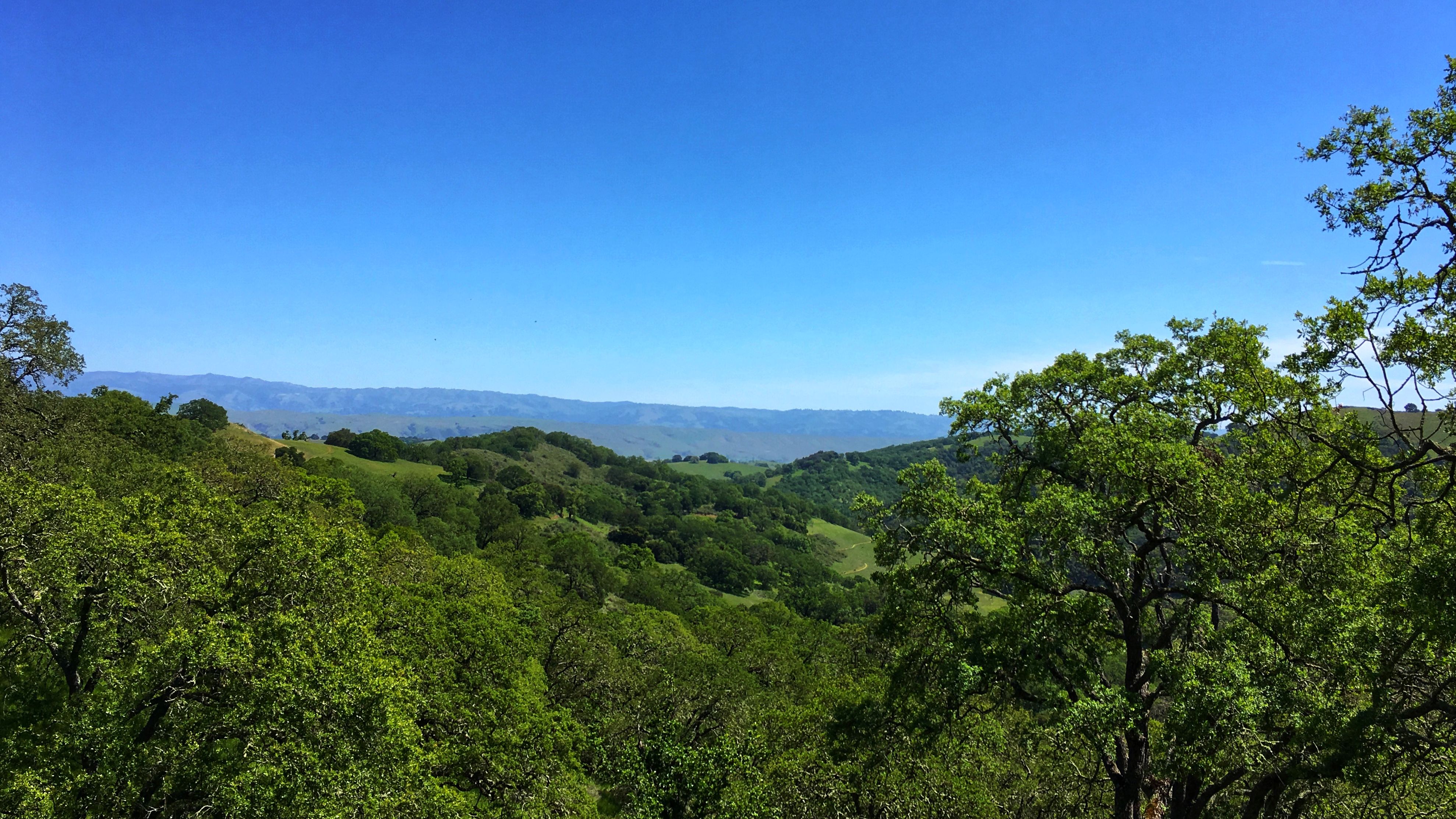 Preserving open space is one thing that California does really well. Even in the crowded hub of the bay area, it’s possible to get away from it all. The various parks and open space groups work hard to buy up as much land as possible and keep it from being developed. And California ridiculously pretty. Especially this time of year.

Around the backside of the hill – on the Lisa Killough Trail – we had views of Mount Umunhum. If you zoom in you can see the tower on the top of the distance mountain. It used to be a cold war surveillance tower and then sat abandoned for a long time. It’s now another Open Space project which opened recently after years of work and delay. I still haven’t been up to see it since it opened, and I was pleasantly surprised to come around the trail and find it looking down on us. 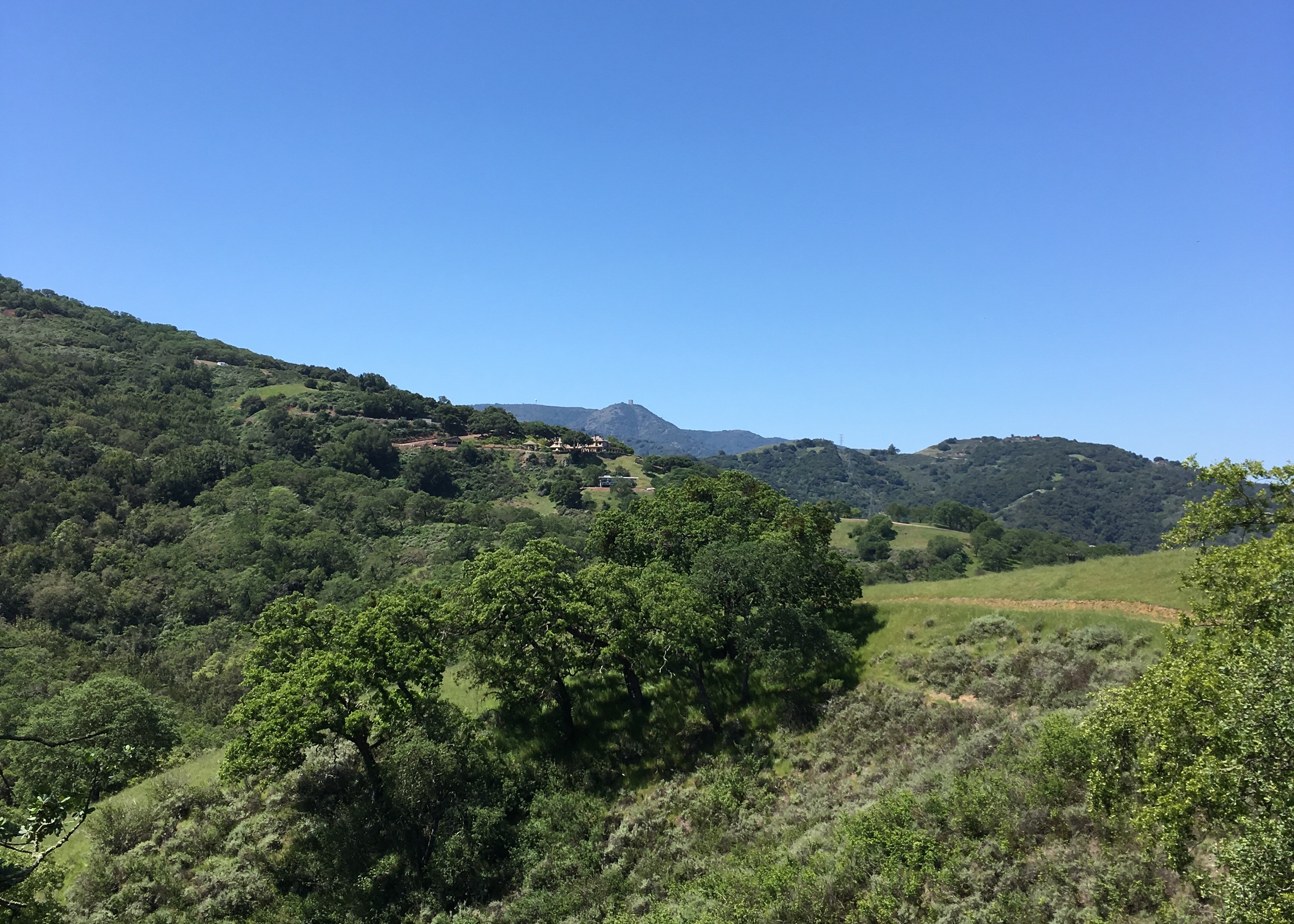 Although the ride was only 7ish miles, it took a long time with just walking. My butt was getting sore and my ankle was bothering me a little so I ended up getting off and walking the last 1/2 mile or so. I often find hiking down hills to be easier than riding. It was probably a 1% grade so nothing serious, but it felt good to get out of the saddle for a bit. We stopped back at the water trough where Levi drank up and Dijon splashed uselessly again. Then we took them back to the trailer, untacked, loaded up, and hit the road.

I’m really glad we got out before the rain. That night was pouring rain and then on Monday it was hailing. Hailing! I know I shouldn’t be complaining about California’s weather since we’re at least not getting snowed on, but it’d be cool if the weather could just stop it and settle into spring. I went from putting a fly sheet on to blanketing in less than 24 hours because this weather is nuts. But at least I got out on Sunday. A nice trail ride through the pretty hills in perfect weather really lifted my spirits. It’s days like this that make me know I’ll miss California.

12 thoughts on “Change of Scenery”