Our last time jumping was at the show, so I figured maybe we should do more of that before the next show. We really need to cement cantering before jumping is going to get much better, because there’s only so much we can do with trotting over jumps.

It was 90+ degrees so we did a pretty short ride. I warmed up doing some easy trotting and asked her to canter a bit in each direction. We still can’t make a full circuit around the arena cantering, but it is getting better. My husband was setting up jumps for me so I don’t have any pictures of cantering.
All of our poles keep disappearing so I only had three jumps to work with, but I strung them all together into sort of a course. We started with a little cross rail that Nilla felt was only worth trotting over. 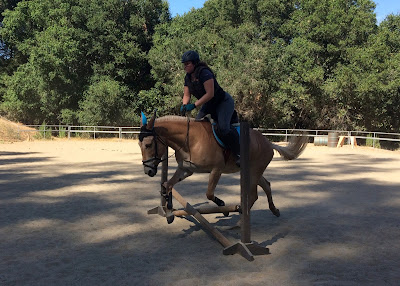 I asked him to raise it and he put it up to a vertical. Which I then complained was too high and he pointed out that it was the same height as the jumps at the RDLA show and my response was I thought those were a bad idea too.
So we came around and did the vertical and Nilla was too busy playing with her tongue to clear the jump and knocked it with a hind. I do not know what my position is doing here. It’s a problem. I could probably put together a bunch of the day’s pictures into a whole new fail post.
Like the next attempt where we knocked down the tiny vertical. And I climbed up her neck to help her do it. 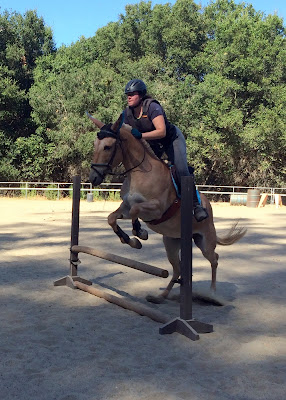 So I had my husband put it down to a crossrail so we could have a successful jump. 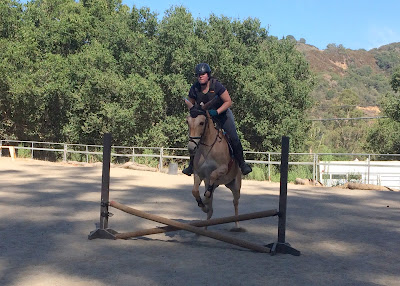 We did this and then circled around to a different vertical a few times before we faced the oxer. My husband put it up and we had another argument about things that aren’t a good idea. Because we’ve never jumped an over before and I was not sure how she’d take it. She’s so green and I worry about giving her a bad experience. But it was only a 1 foot oxer so I gave in and we did it.
I think this picture is probably the most hilarious jumping picture. I really wish it were in better focus because it’s such a perfect capture of her just realizing after she starts to jump that “omg, this thing is wide and what am I supposed to do with my feet, I better angle my head and look down at it.” 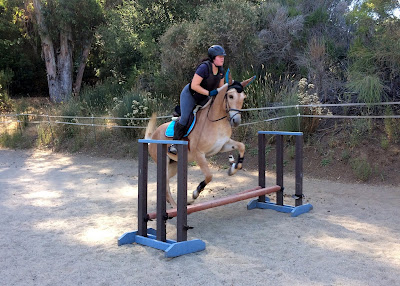 Seriously, is she not adorable? She did really well, so we came back around to do it again and this time she was prepared for how “big” it was. 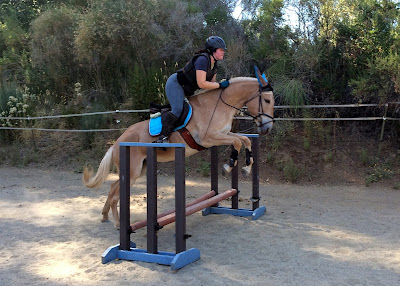 I wish I had photoshop skills because then I could move the poles up about two feet and have an awesome jumping picture. Instead, I have a picture of her massively over jumping a 1 foot oxer. Her form is lovely though. And for once, my form is actually decent. We finished our mini course after this and then I let her be done. She was a very good mule.