I’m just gonna go ahead and get this out there:

I know you all want the house hunters conclusion.

But I can’t post that until we’ve closed. I should have a final update on Monday.

In the meantime, I have pictures from the LAHHA games show we went to the weekend before we left. We’ve always enjoyed going to the LAHHA events. They’re cheap and all the funds they do collect go to a nonprofit whose cause is preserving horse access in the area, the arena is close by, and best of all, they’re always a lot of fun. This time was no exception. 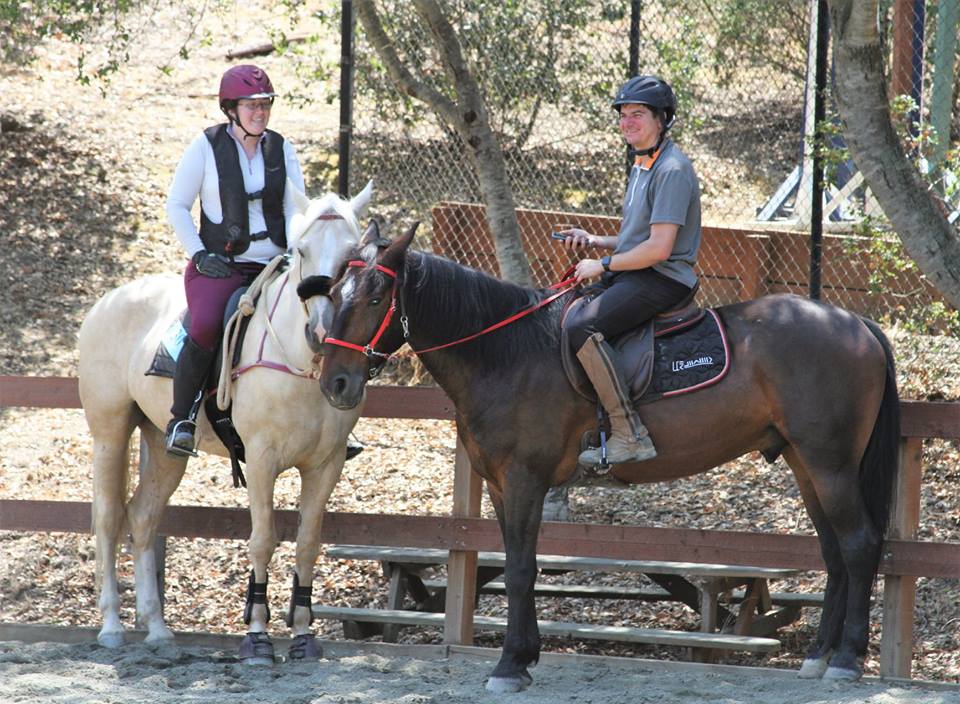 We packed Levi and Eugene up and trailered over. They had a unlimited games option and we both signed up for that. Then we had some time to get tacked up and warm up in the arena. Then it was time for egg and spoon. Except they didn’t have eggs – they had golf balls. Those things were a nightmare to keep on the spoon. Several people dropped theirs just waiting for the round to start.

I have just about no hand eye coordination, but Levi is smooth as glass. Like I own him and I still don’t think it’s fair how comfortable he is. My husband said we had an unfair advantage. However, as he normally wins these sorts of games, I just stuck my tongue out at him. There were no ribbons or prizes, it was all just for fun. Nonetheless, I won!

The next game was limbo and I just hopped off and left the arena for that nonsense. All the kids were on ponies and my husband and the other guy were on little 15hh horses. They started with the pole pretty high and had all the horses and riders walk through. Then they kept lowering it. The rules were if you or your horse touched the pole you were out. 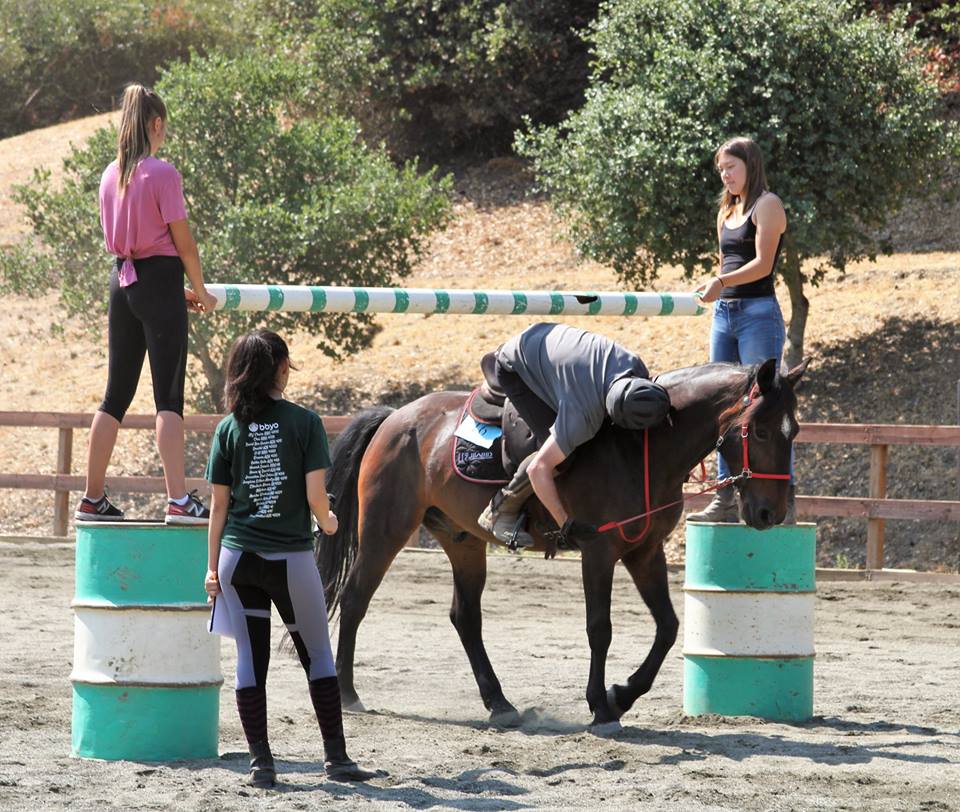 You can see my husband trying to tug Eugene’s head down to keep his ears from touching it. A small child on a small horse ended up winning that game, but it was fun to watch.

The next game was musical poles, like musical chairs, but the horses had to stop half way over a pole. If two horses arrived at a pole, whoever got stopped over it first won, so you could compete until the last moment. Levi thought this game was a hell of a lot of fun. He started charging at the poles and at one point raced up to one, reared, and slammed his feet down over the pole. The poor woman facing off against us looked horrified and I was like, umm, maybe we should take it down a notch, Levi. 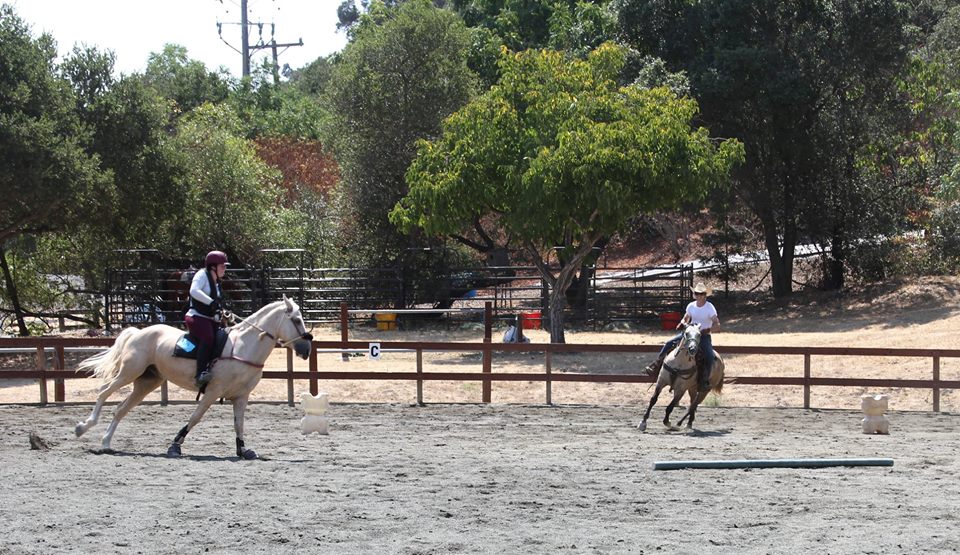 In the end it came down to me and the Cowboy. Levi made it to the pole first, but then he too excited to stand still and took off like 0.5 seconds after stopping and the other guy nabbed the pole. 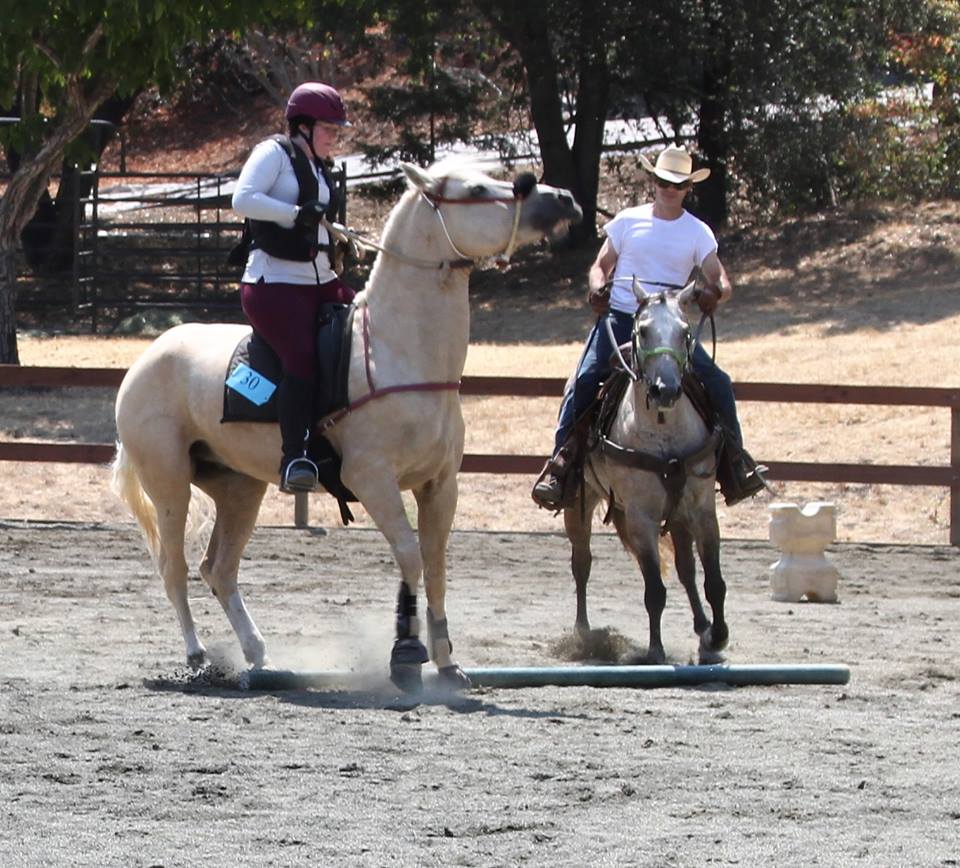 no time for stopping

After that they had a few games that we didn’t do like bobbing for apples and a running on buckets relay. My husband and I hung out and chatted with the people from LAHHA that we’ve come to know over the years. One woman is doing adult Pony club (I totally want to do this too) and has a test coming up so she was practicing telling age by teeth on Levi. Levi loved it. He loves all attention and he’s so mouthy it was like a new fun game. 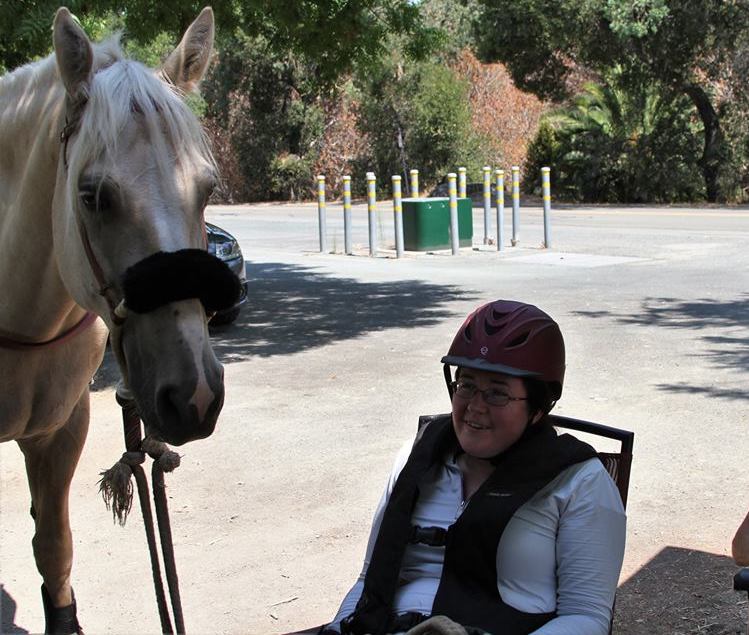 Then there was a lunch break and pause to water the arena. My husband took Eugene in to see if he’d like to stand under the water spray since hat horses loves water and it was really hot out. Of course Eugene didn’t think just standing in the spray was enough; he needed to drink from the spray. 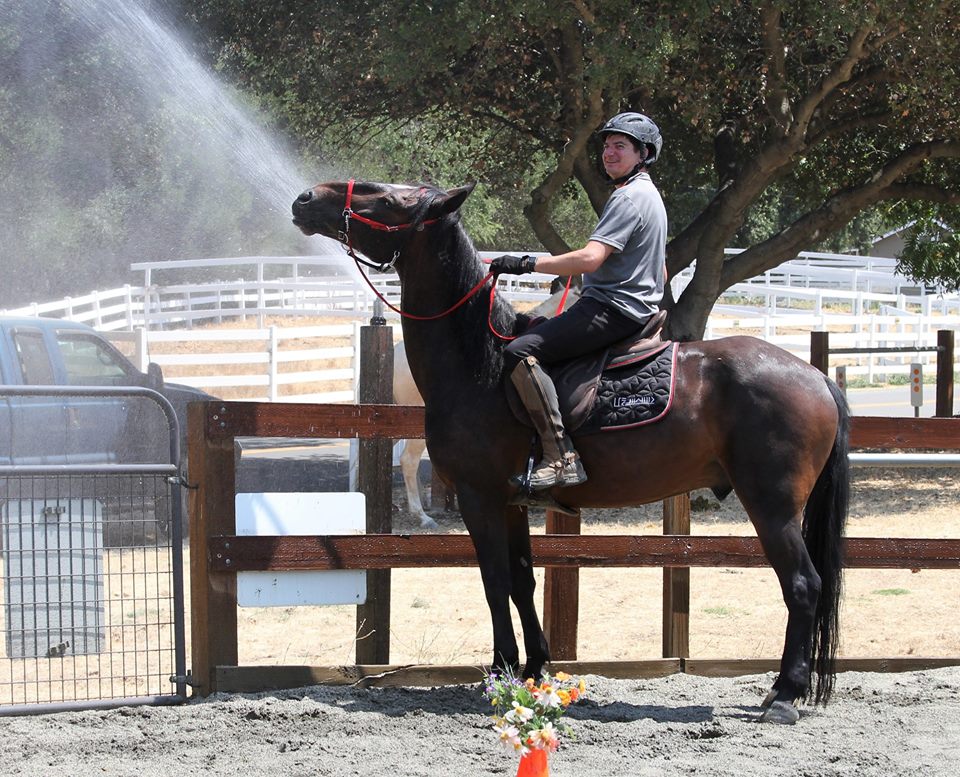 That horse is such a freaking character. Someone sitting on a mounting block in the arena is terrifying, but arena sprinklers? Those are just fun drinking devices.

After the break, we got to do some of the fun relay and water games. We did a relay where we had to race down and back, pass a baton between partners, and then they raced down and back again. My husband actually joined up with the other guy and I joined up with one of the kids for this round, but the photographer didn’t get any pictures.

We’ve played the water collection game a few times now and it’s always fun. You start at one end with an empty cup and empty bucket on the ground. At the other end of the arena is a full bucket of water up on a barrel. You ride down, fill your cup with water, ride back and pour it into your bucket. 3 people went at a time for 3 minutes each and then the next group went.

Levi takes games a little too seriously, but we had fun. #blmmustang #horsesofinstagram #horselife

Because he’s done it a few times now, Levi is really into this game. He knows how to speed up across the middle stretch and slow down to round the buckets. 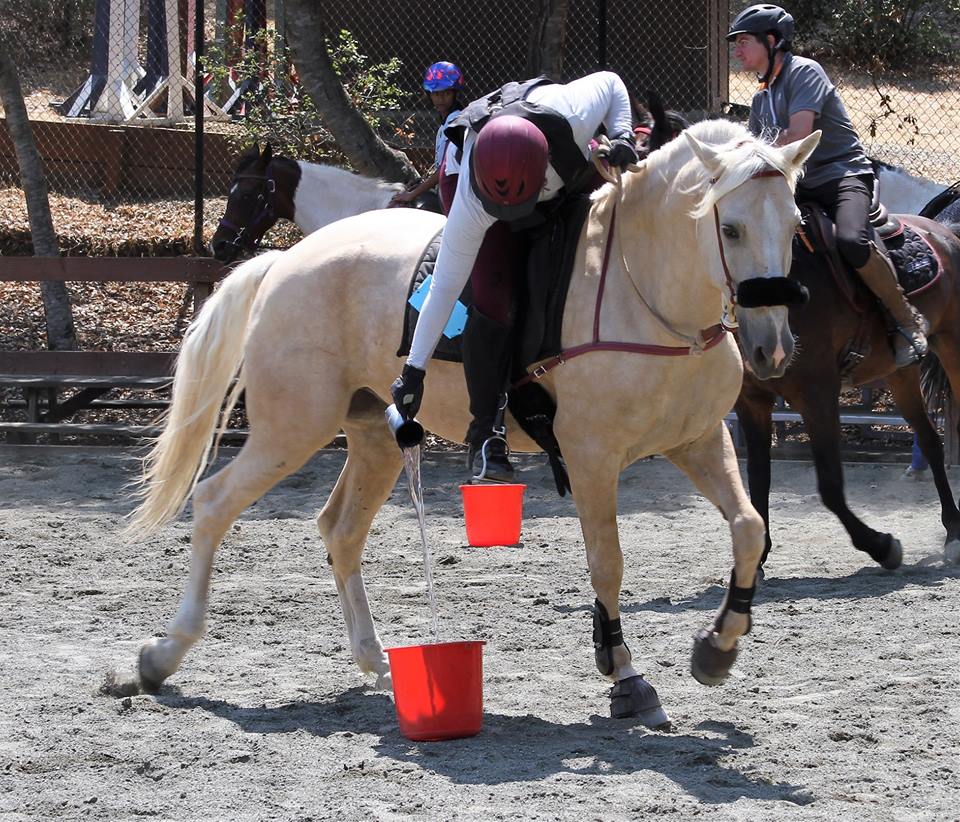 Plus he’s so smooth the water never splashes. My husband is actually faster than me and could beat me, but Eugene doesn’t like to slow down enough for the pouring section and he ended up pouring some of his water into the sand. 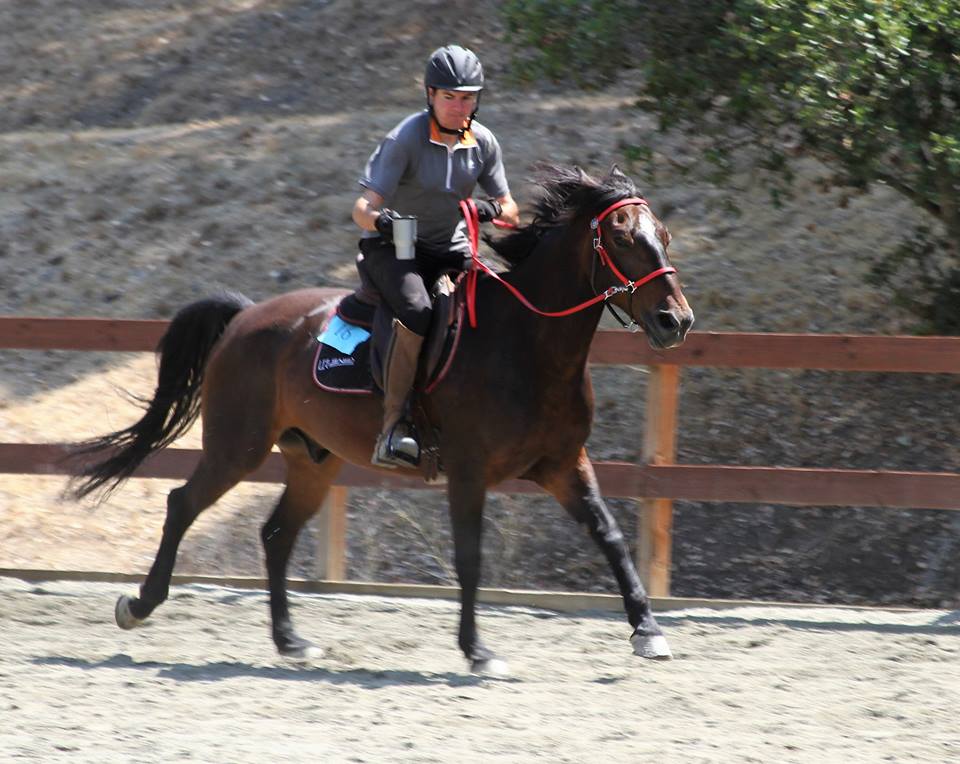 Time got called before I could pour my last cup so I offered it to Levi. 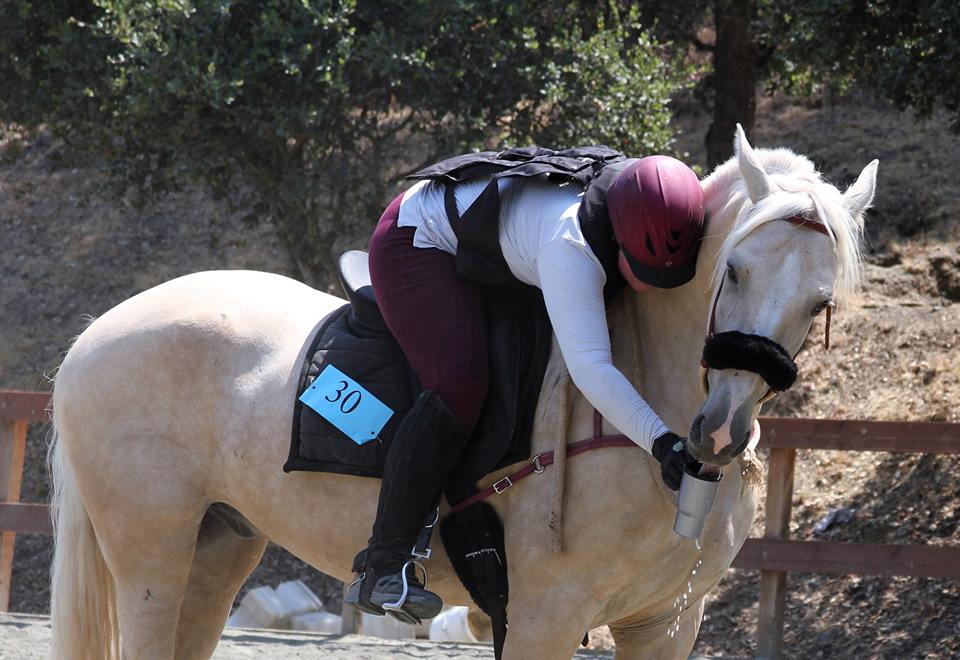 If you look closely, you can see his tongue

We also played a partners game with a clear plastic cup. They had filled the water to a line and you had to run down around the end, come back, swap the cup with your partner and have them run down and back. We also did a solo game with the lined ups and had to go around the ring doing w/t/c on command and present our cups for measuring. The girls running it were shocked when Levi and I hadn’t lost any of our water. Like I said, smooth. Crazy, but smooth. Sadly, no pictures of those games.We had a bit of a break after that to set up the trail obstacles. We had to go through a spookily decorated gate, over a tarp liverpool, pick up and open an umbrella and move it from one barrel to the next, back through and L of poles, trot poles, and stop in a square. Fastest time won.

Eugene went first. He was find with the gate, but  – predictably – though the tarp liverpool with a ditch of doom and refused. They had a bunch of spinning and swerving before he finally awkwardly hurled his body over it. 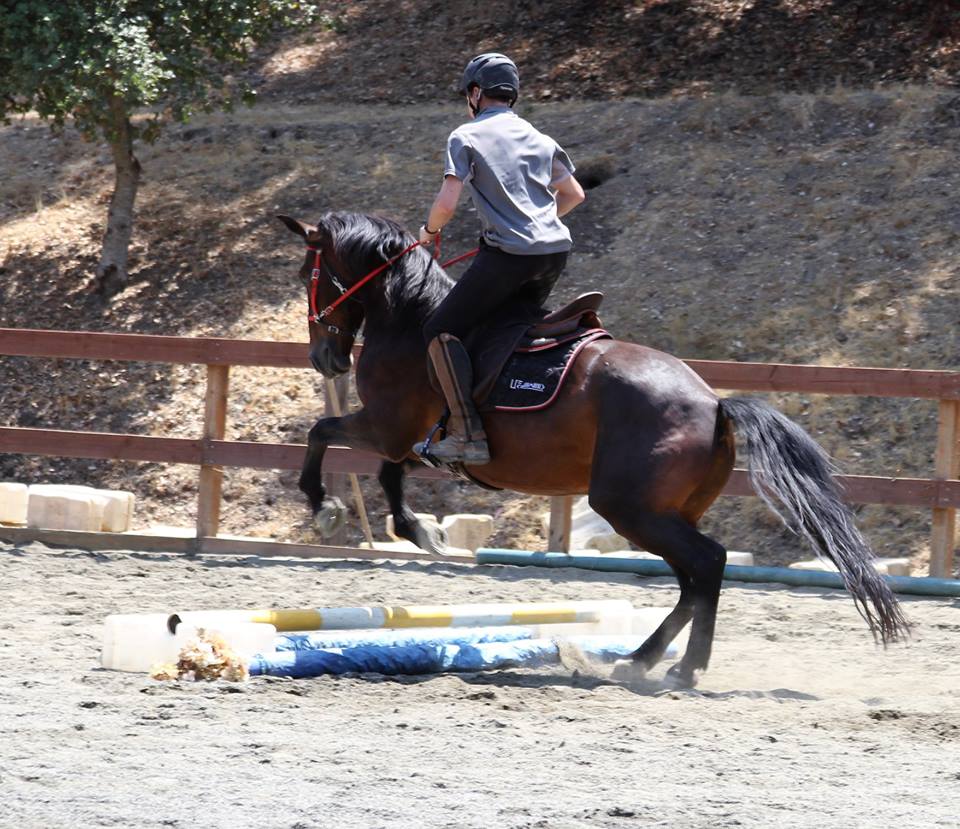 He was fine with the rest of the course including the umbrella. 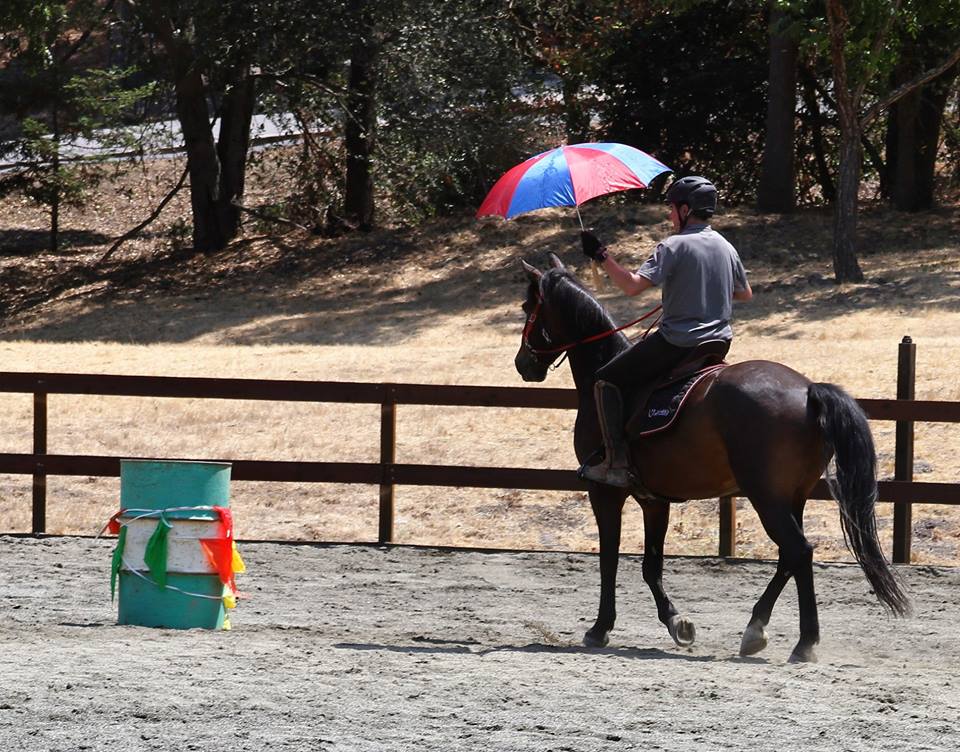 I think he ended up in 2nd place. There weren’t any ribbons so I don’t remember most of it.

Levi was very skeptical of the gate and it took us forever to get through that. 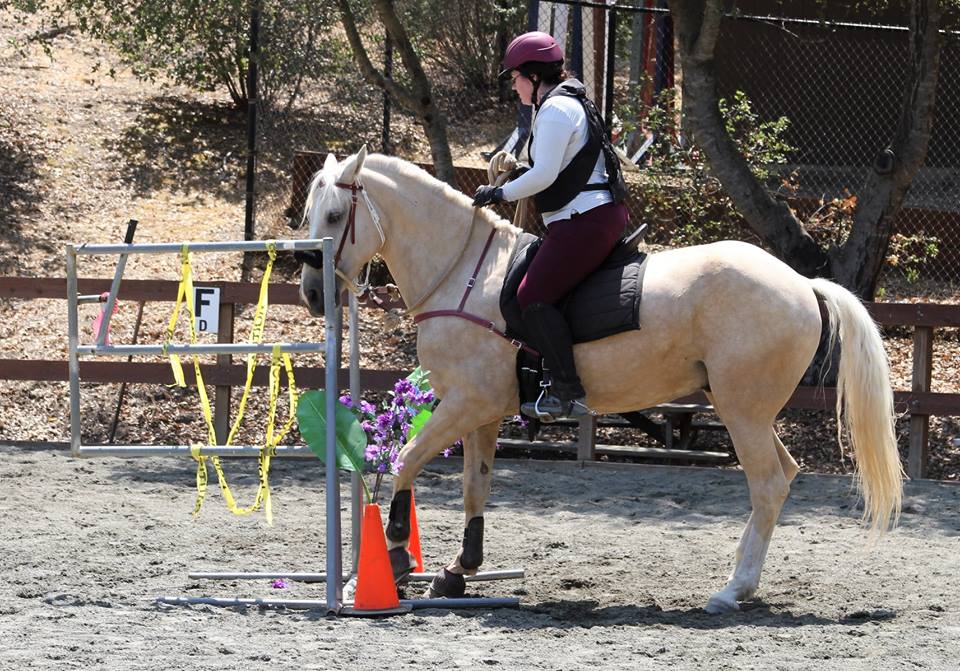 Then the liverpool was snorted at, but ultimately Levi chose to walk through it. No over it. Through it. 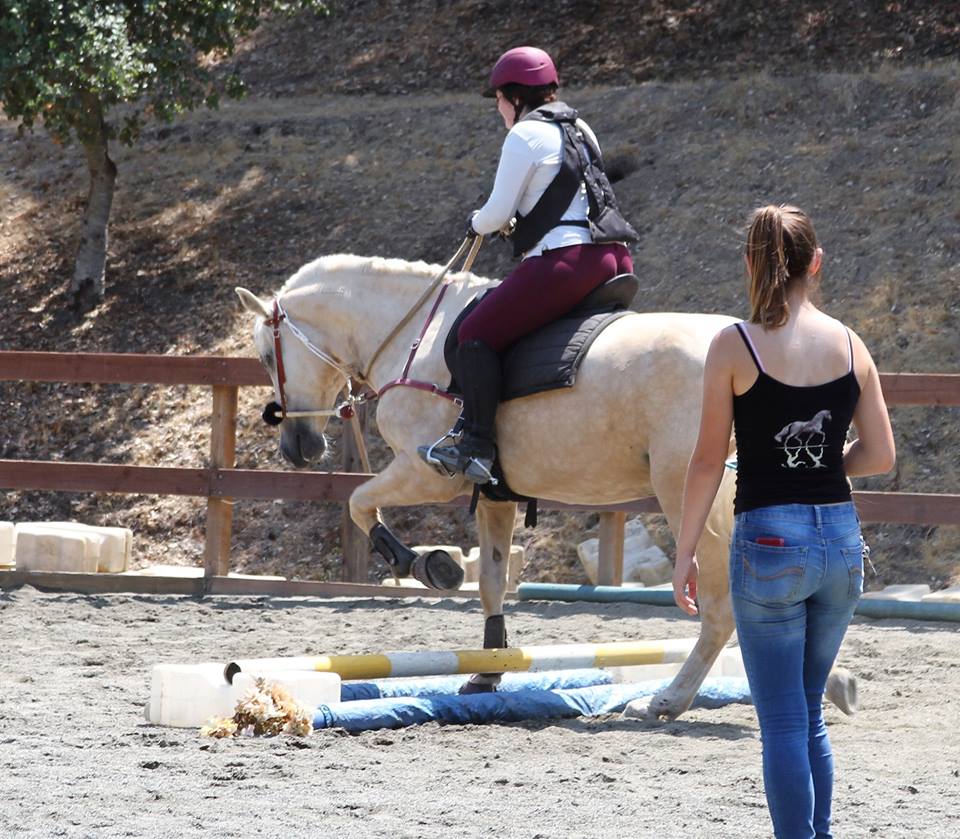 The umbrella was a nonissue. 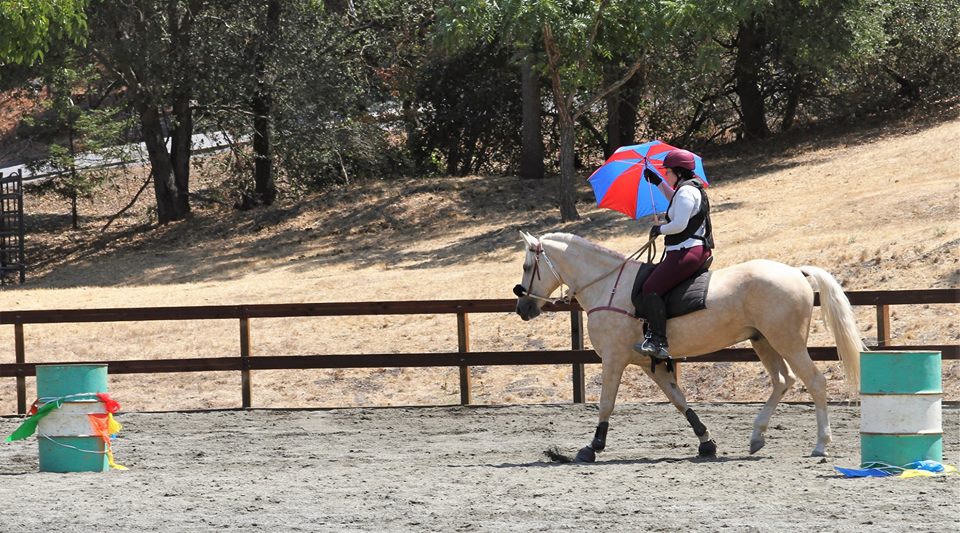 Such a spooky horse

Backing through the L was not so good. Levi really hates backing. But we’ve now down this several times at LAHHA shows and this time we didn’t it without any tantrums or threats to rear. Good boy. 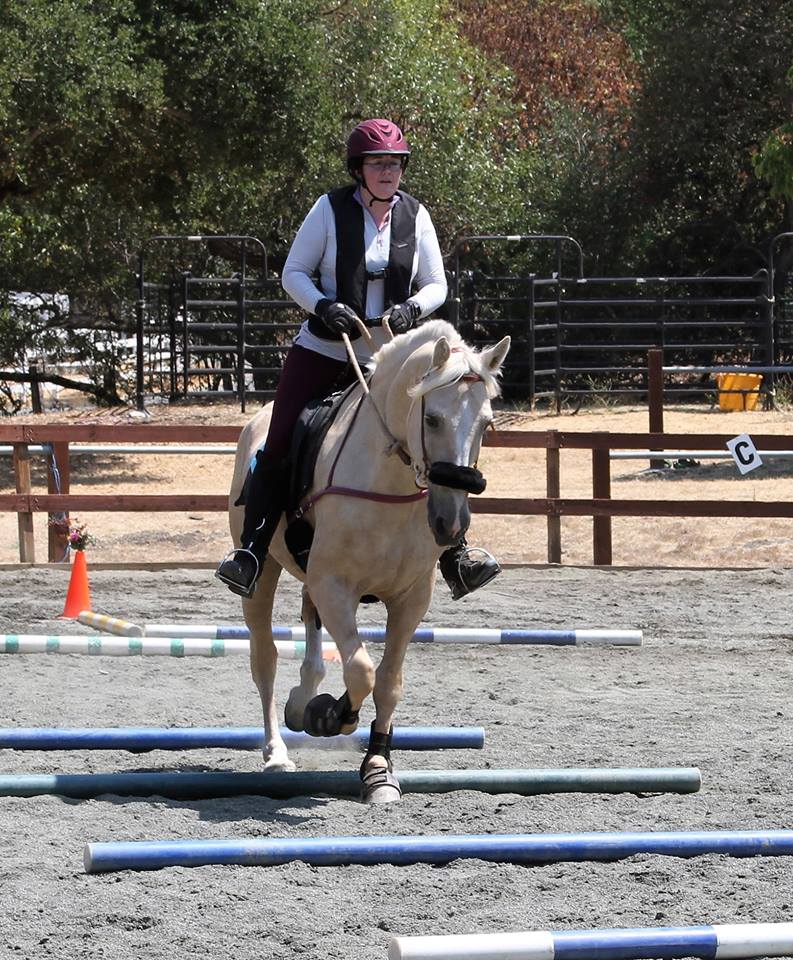 Down the trot poles and into the finish box.

Although the show had a few more games left to go, we had to pack up and head out at that point as we had plans for dinner and games with some friends that evening.

Although we probably should have spent the day packing, I don’t care. It was a really fun day. Sometimes it’s nice to just go out and enjoy your horse. I really like doing these sorts of fun shows/games days occasionally.

The couple that games together stays together? #blmmustang #horsesofinstagram #horselife