I’ve been looking for a dressage saddle for Nilla for a few years now. We’ve used the Wintec for 2 years now, but it never fit me. It was a good inch too small, looked like it had been chewed on by rats, and was not comfortable, but it kinda fit Nilla so we carried on with it. However, at the end of the last year, I had begun to suspect that it wasn’t fitting Nilla much either. When I shaved her in the fall, I found big white marks on her back. The white hairs hadn’t grown out yet, so I only found them when I shaved her.

I left the Wintec behind while she was at Laura’s and Laura used her own saddle on her. I had plans to meet a saddler at Laura’s and find a new saddle while she was there, but then I ended up being really busy and not making it out to Laura’s much. When I brought Nilla back, I still wasn’t riding her because of her hoof, but I was looking for a new saddle. I brought several home on trial and none of them worked. I was contemplating just giving up and buying a treeless dressage saddle, but I had some time this week and drove down to Santa Cruz to check out a feed store that has a pretty decent selection of consignment saddles. Even more surprisingly, they had a bunch of wide/x-wide saddles and even a few that were my size as well.

I brought one back on trial and I think I might have a solution. I don’t think it’s a perfect fit for Nilla and it’s not my ideal saddle either (I really prefer a more forward flap, which is basically impossible to find in dressage saddles unless I custom order). However, it’s pretty damned close. 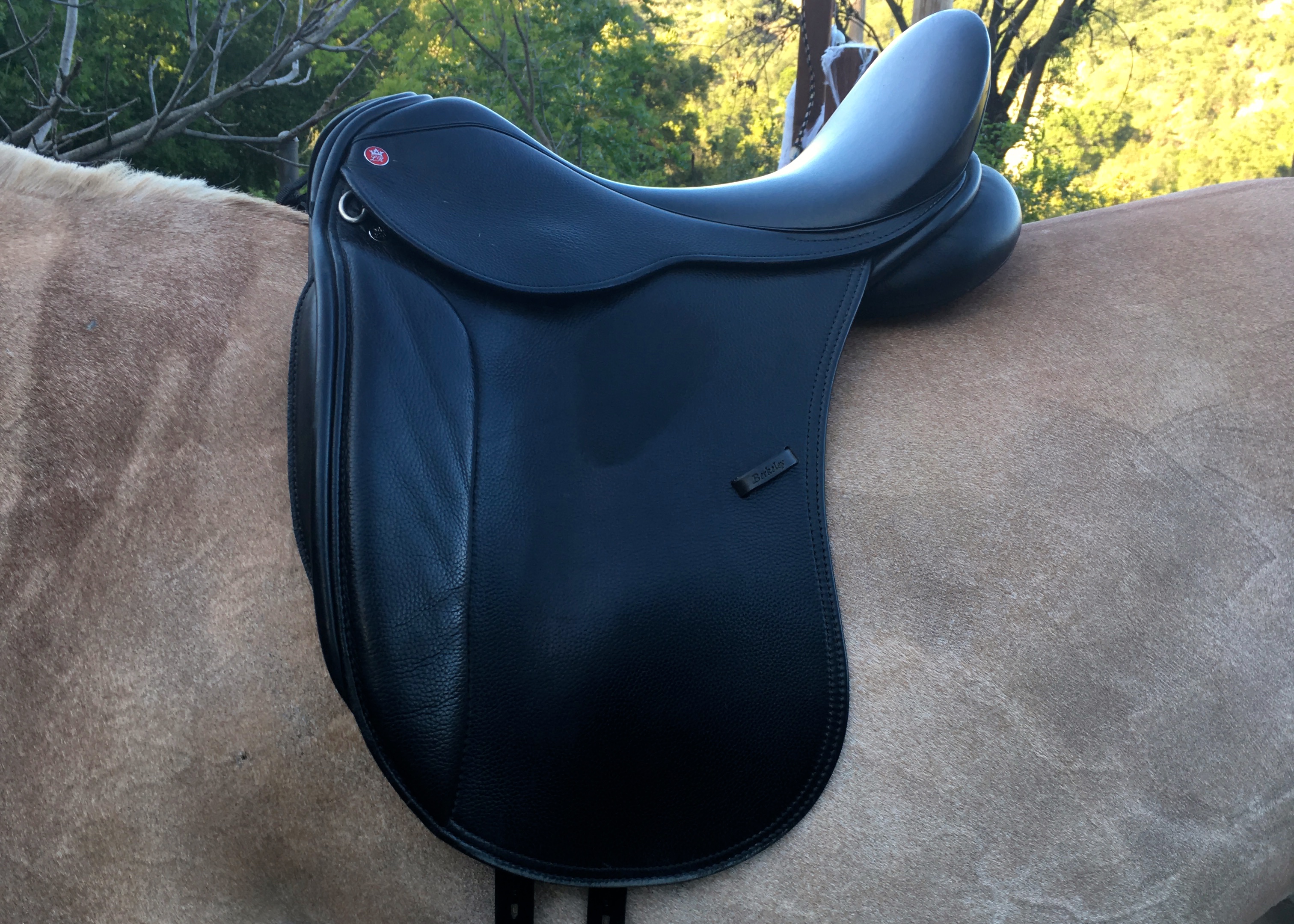 It’s a Lovatt and Ricketts Berkeley Dressage Saddle. This saddle has a lot of cool features like moveable front billets, a balancing ring on the rear billet, moveable and exchangeable knee rolls (I only got the one set though), and swinging stirrups bars. 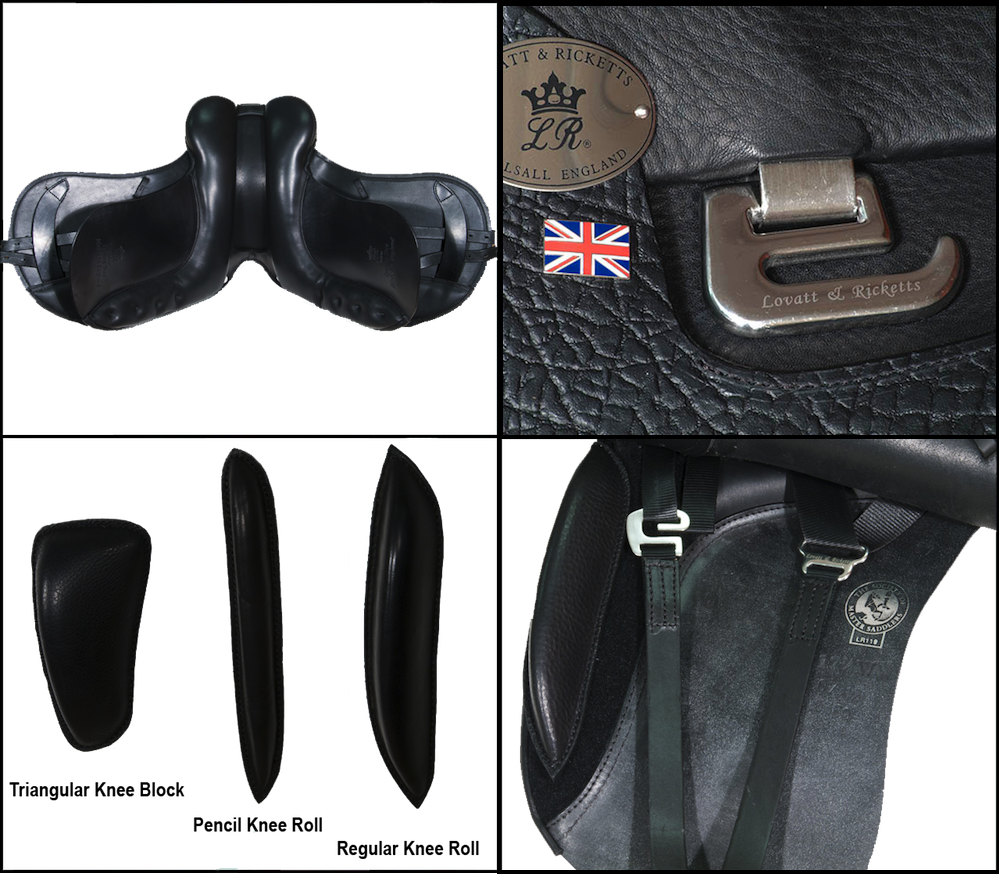 It’s fairly comfortable. I had to move the knee roll up pretty far, but I am hoping I can order the smaller optional knee roll to swap in. Most importantly, it fits Nilla pretty well. 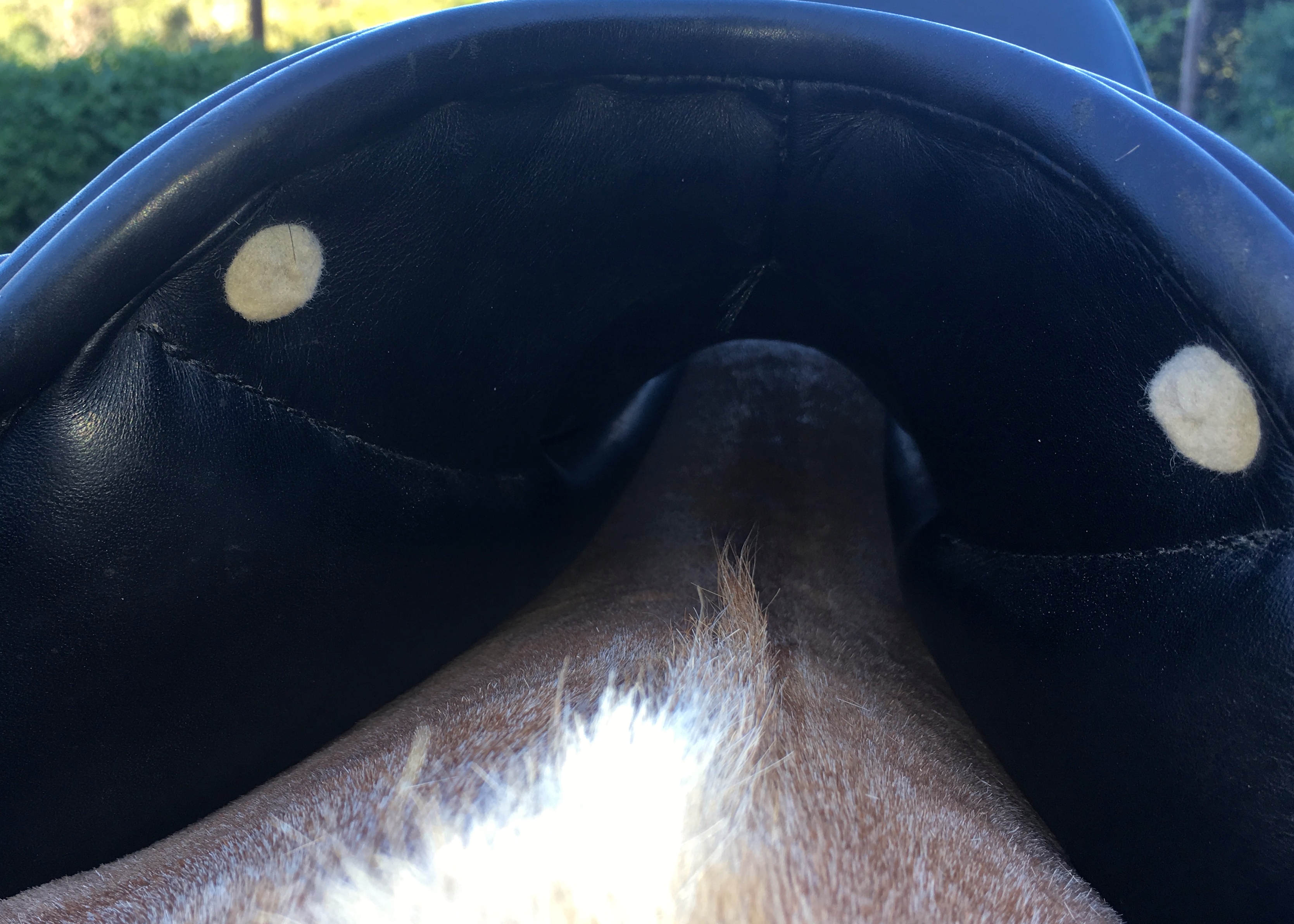 You can see it follows right along her back. I wish it had a bit more shoulder room, but really I have never found anything that fits Nilla’s shoulders, so this is actually pretty good. 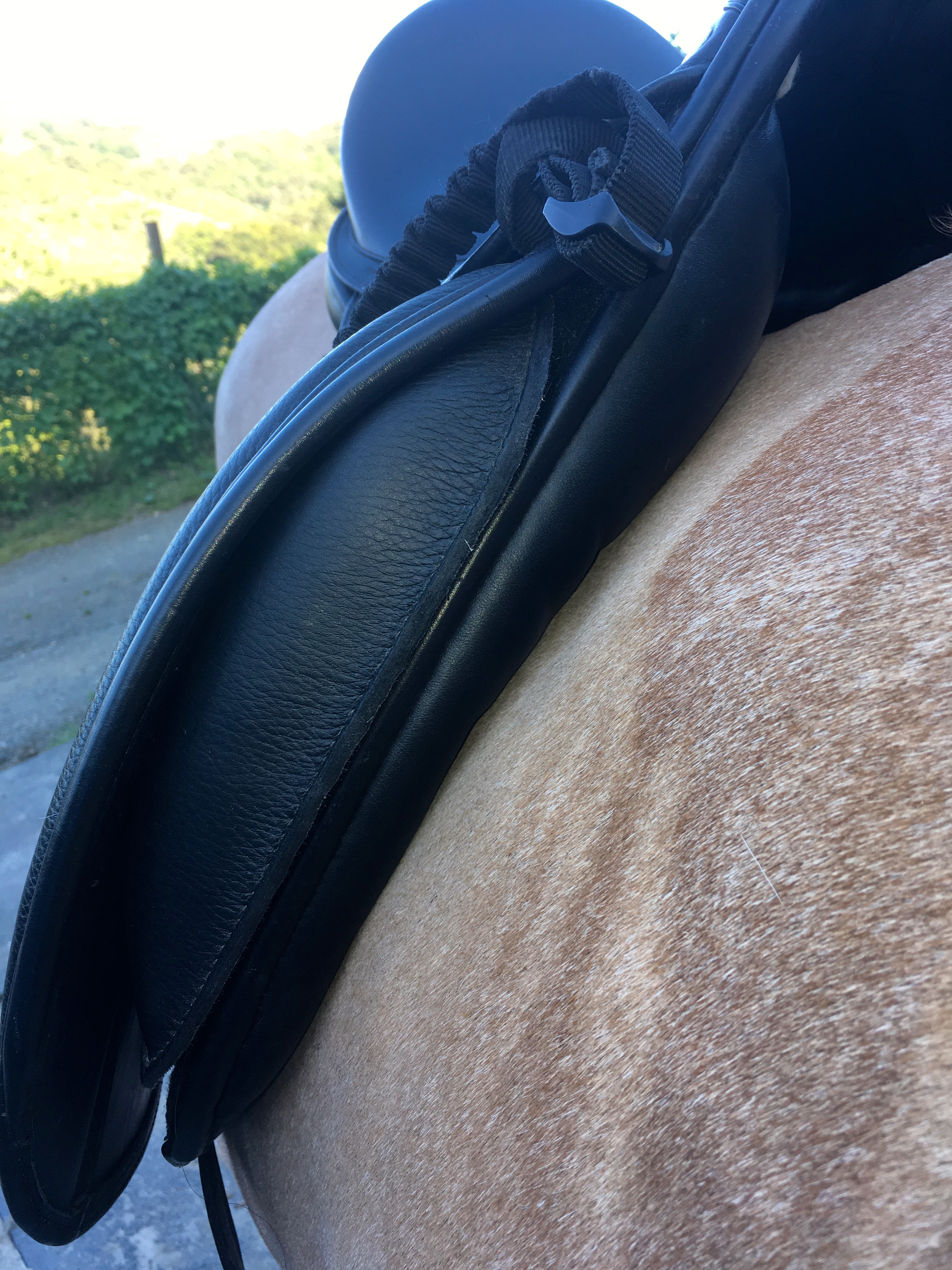 Really, the part I like the least is the back of the panels. They look really overstuffed and round to me. But – despite this being a used saddle – it looks like it’s practically new and I’m hoping the panels will compress over time or I’ll just get a saddler to flatten them a bit. 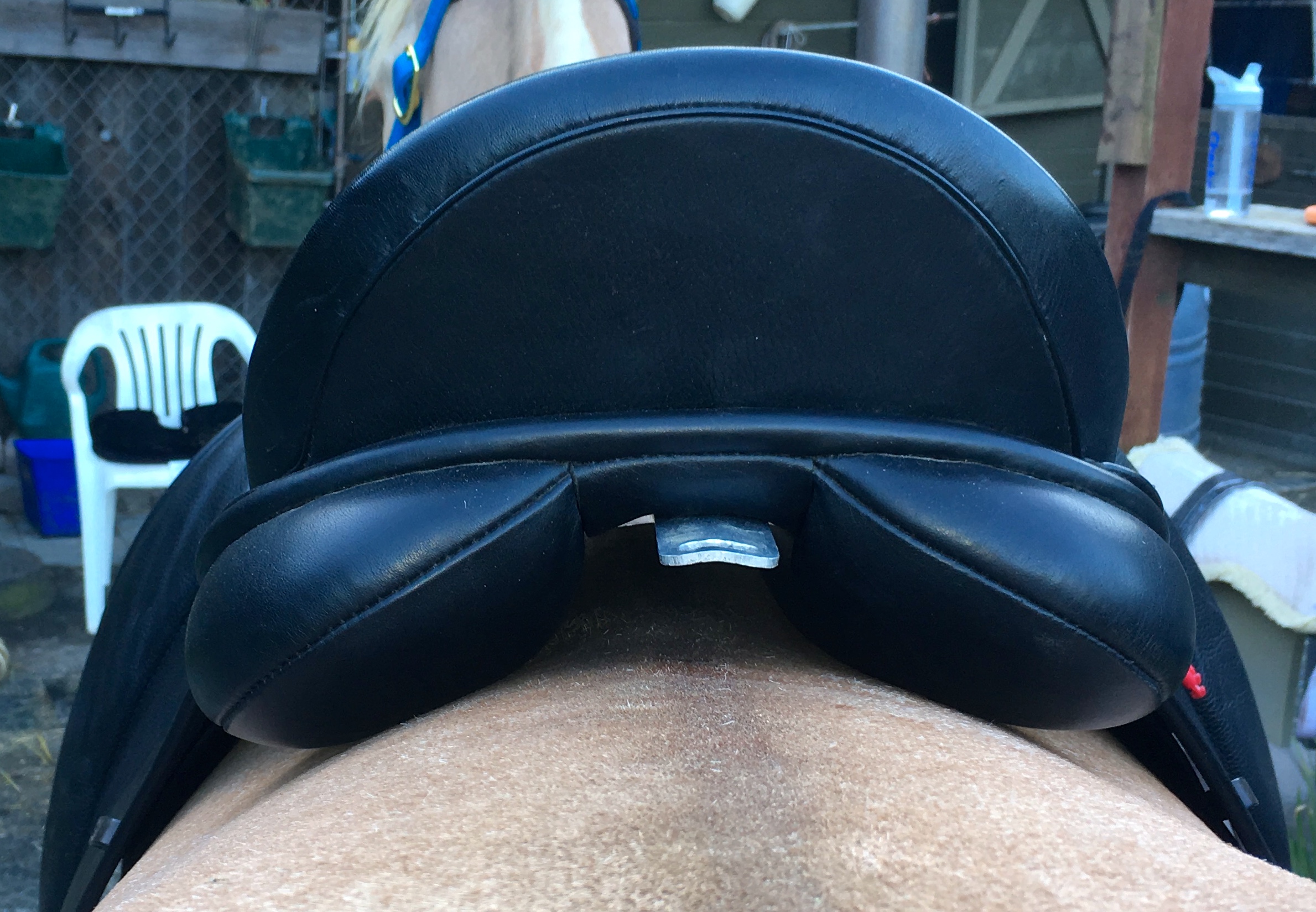 Nilla move really nicely in it. I can feel her stepping out nicely and feeling pretty free in her back. I wanted to try it out without a shimmed pad, but I think I can make it fit a little better with my TSF pad. 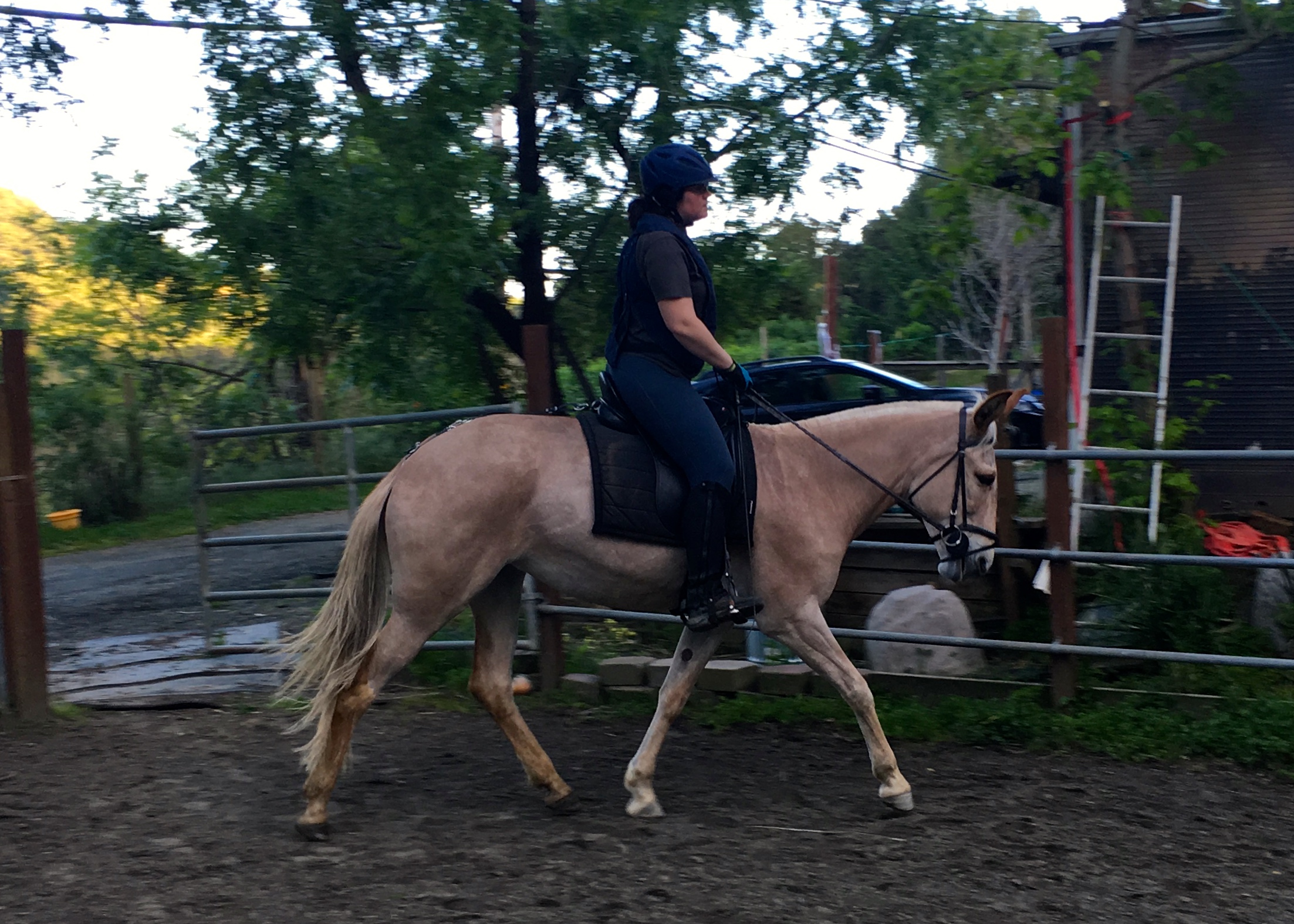 It’s not really fixing anything for my position, but it doesn’t actively tip me forward the way a lot of dressage saddles do. I think the smaller knee roll and shimmed pad will help with that too. And the best part is, it was freaking cheap.