I’ve been spending a lot of time watching Netflix lately and I’m really starting to scrape the bottom of the barrel. This has resulted in my recommendations getting more and more questionable. But sometimes terrible movies can be really enjoyable to watch. It’s like a train wreck; you can’t look away.

I recently watched The Horse Dancer and, oh, was it rewarding. I’m going to go ahead and spoil this whole review by saying I totally recommend watching it; it is so bad it’s good. This movie is like someone set out to do a mockumentary of everything that is wrong with horse movies. It has all the horse movie trope you’re looking for: a girl with the ability to go from never riding before to excelling in a matter of one summer, a family farm that can only be saved through this girl’s riding, actors who I can only image failed out of local community theater, a rich snooty girl who has to learn some lessons, obviously incorrect ways of managing and riding horses, actors who cannot ride, lots of horsey vocalizations, a midnight ride, and more. 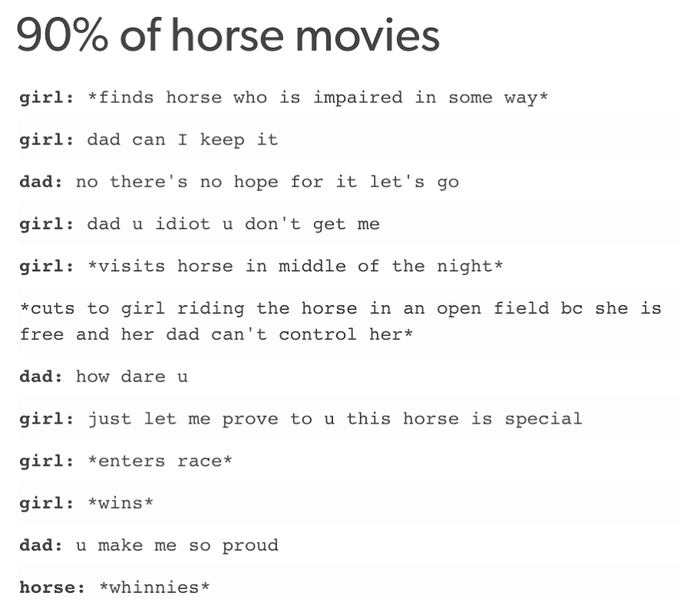 Actually, to be fair, this movie is missing the whole special needs horse that can only be saved by the magical horse-girl connection. There’s no amazingly gorgeous and talented horse that only connects with the main character. There are some element of this film that actually feel authentic. And in some – admittedly not enough – moments Horse Dancer almost seems to be poking fun at itself and horse movies in general: 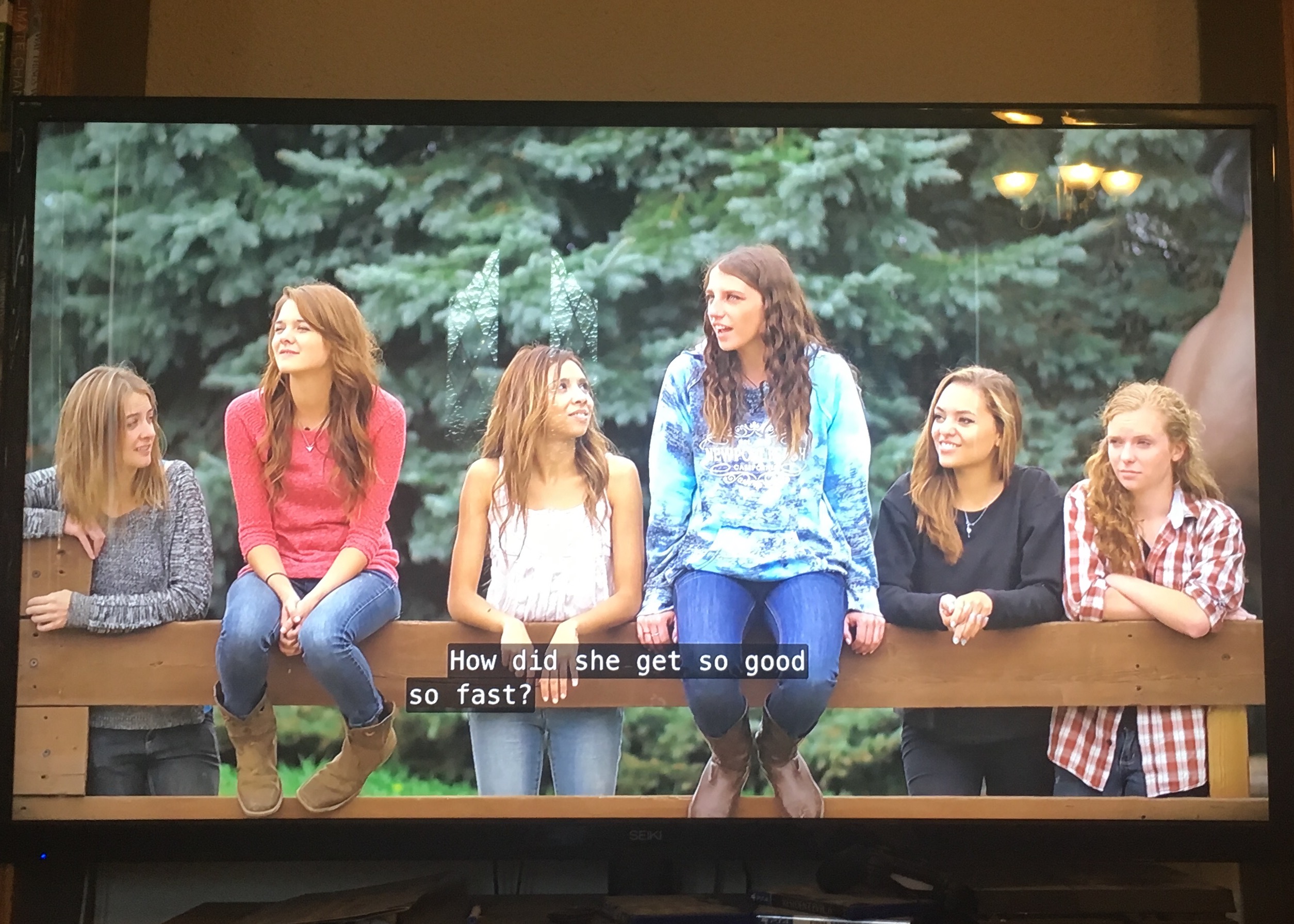 I don’t know group of mostly white but with some vaguely ethnically ambiguous girls (so we can pretend diversity exists in this movie) who are wearing sweatshirts in the summer, how did she get so good so fast?

So if you’ve got 1 hour and 54 minutes of your life to waste: go watch it now.

The movie starts with a bunch of girls doing gymnastics. The main character, Sam, is established as being amazing at gymnastics and is given a letter that will confirm her being added to the olympic team. She decides to take the letter home to her grandma to open it together. We also quickly establish that Sam is a loner and a rebel and better than everyone else. 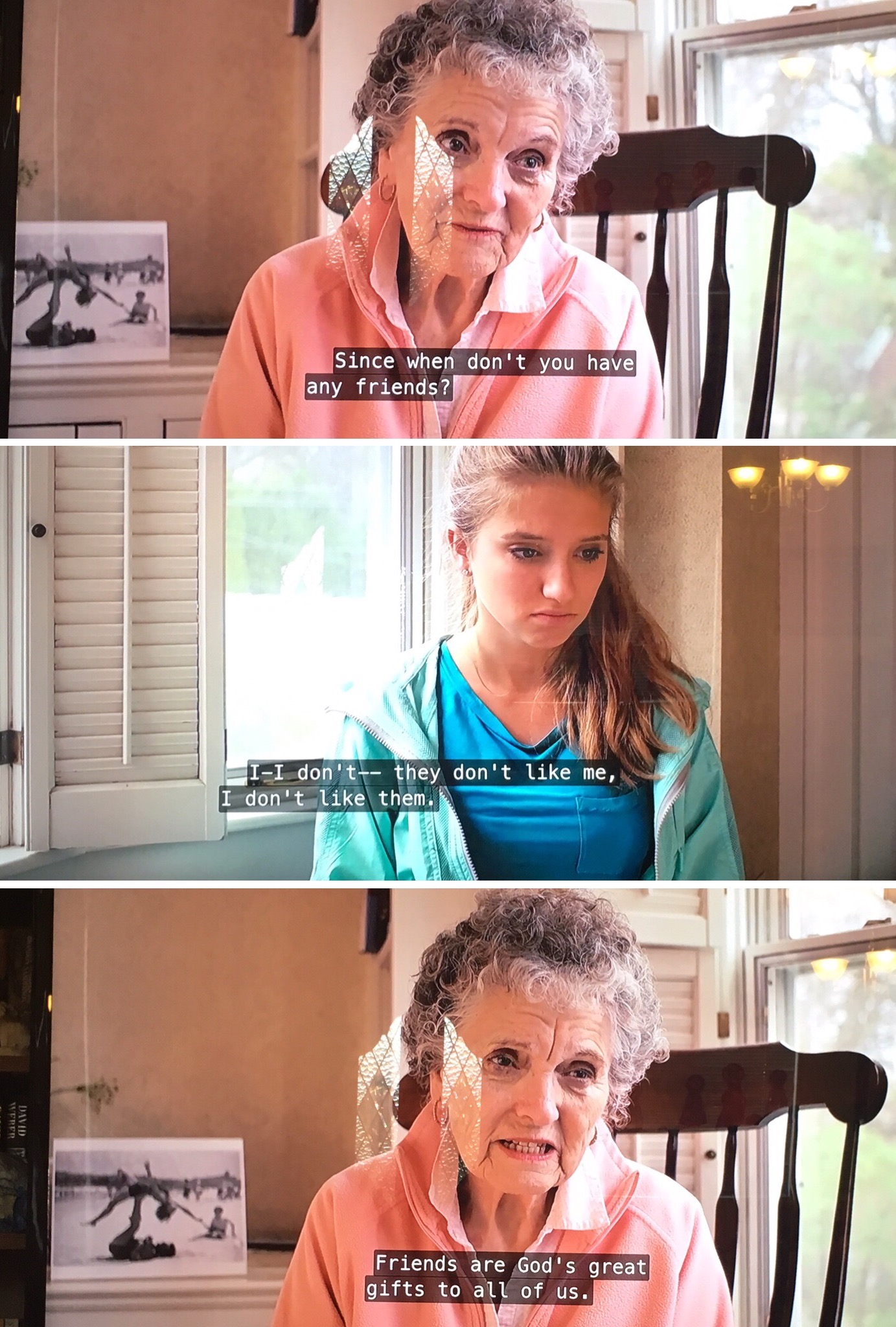 This moment is when I knew this movie was going to be good. Sadly, Sam has not been accepted onto the olympic team, but don’t worry, Grandma has saved up all her money to send her to Horse Summer Camp. Because Sam has apparently always loved horses more than anything else. A love she has chosen to demonstrate by never interacting with a horse even once before in her 15 years of existence.

Off in horse camp world, we’re greeted with images of horses moving awkwardly through lush green fields while the perennial camp favorite “Rise and Shine” is sung. At this point I got a little concerned that I might be in for some kind of religious movie since grandma’s comments were pretty preachy as well, but it is a pretty popular camp song (I worked at 4 different summer camps) so I continued watching. If you’re concerned, this was basically the end of the religious references. 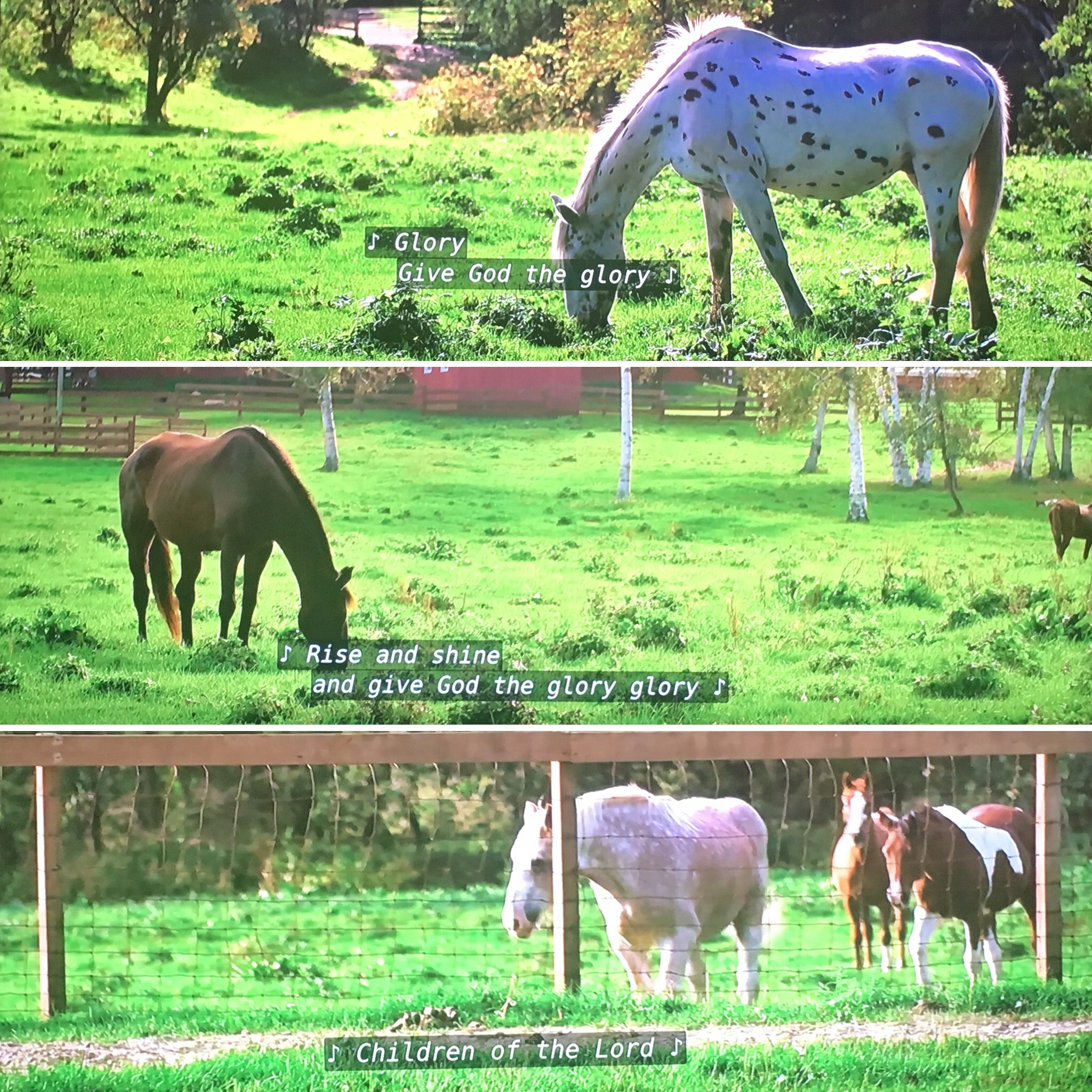 Next we meet Lisa and Stacy. Stacy is here to fulfill the requisite role of bitchy rich girl in a work of equestrian fiction. 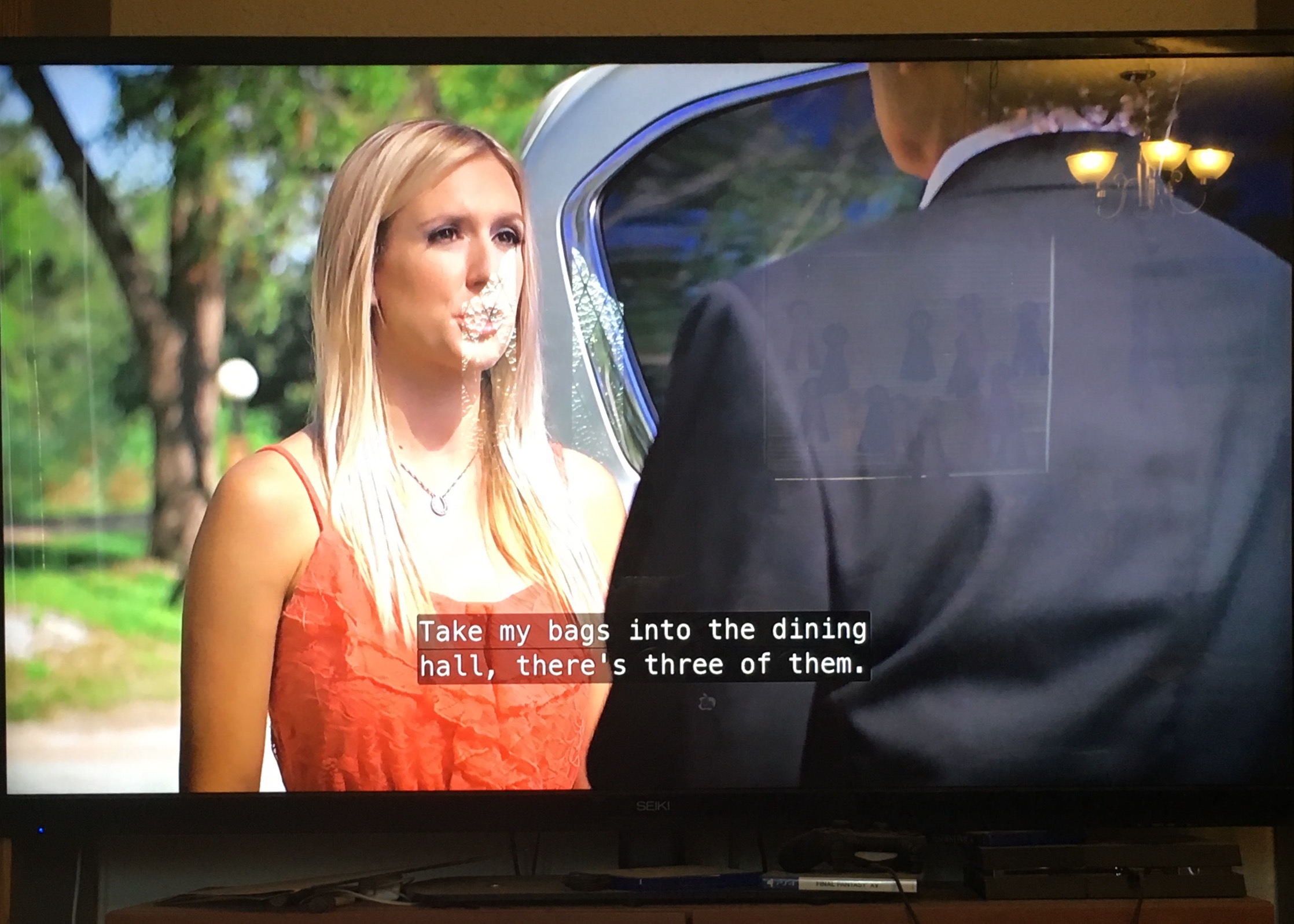 Lisa is here to be the good natured, hard working foil to Stacey. She’s also here to look and dress just like me. No seriously. 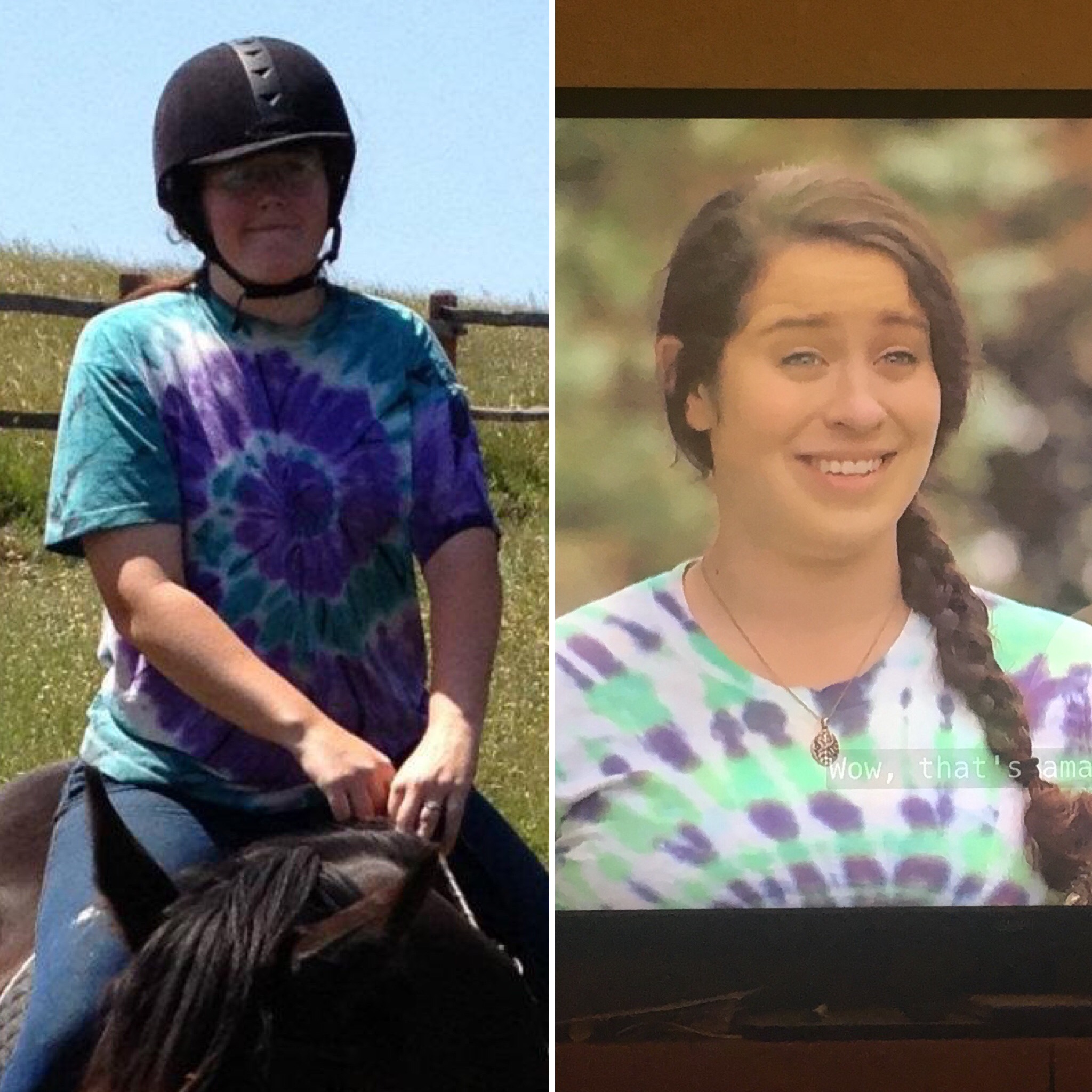 Sadly, looks and an impeccable sense of fashion are where our connection ends. Lisa actually likes people and is painfully cheerful and optimistic. In looking up the actress on IMDB, I have learned that there is a previous movie called Horse Camp that was also set at this camp and Lisa and Stacey were in that movie too. And luckily for me, my library has that movie so stay tuned for that review.

Anyway, at this point the movie sets out to establish the million or so different plot directions it will be attempting to negotiate. There’s Lisa vs. Stacey, Miss Jessica’s engagement, the camp’s lack of funds and imminent sale (unless some plucky gymnast can save them all), the camp talent competition, something to do with camp princess but this is never resolved, teamwork, rules, age appropriate residential decisions, and Sam’s attitude. 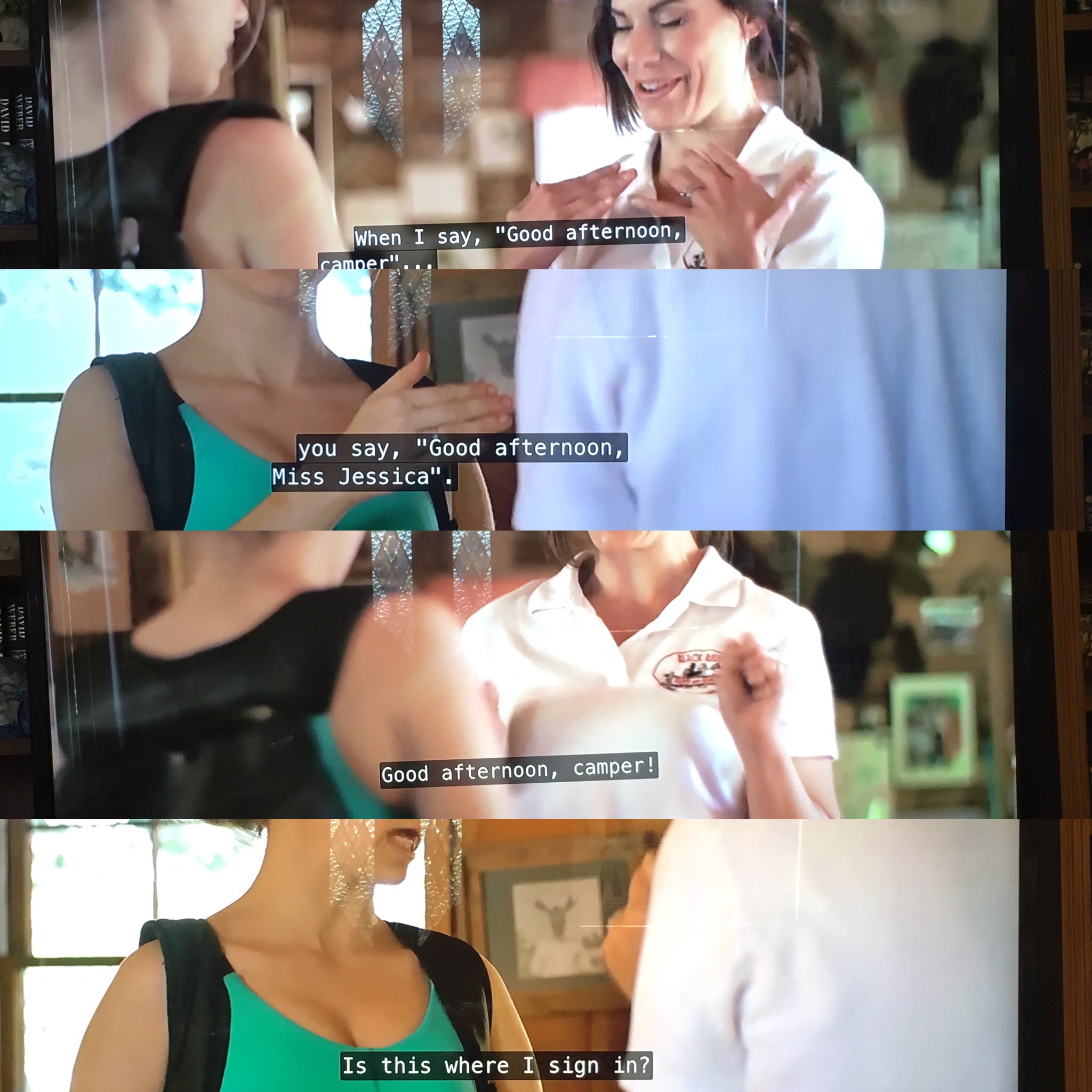 Pretty much what my answer would have been. Man was I fun as a kid. And as a counselor. And now. And most likely always. But I digress. Sam’s demands to be switched to an age group one up from the cabin she was assigned to because she’s not a baby, has an argument about giving up her cell phone, and then proceeds to earn dish duty on the first night by refusing to attend flag ceremony. Flag is super important, mmkay?

Now that we’ve established Sam’s rebel without a cause attitude, we learn that she’s also terrified of horses. It’s almost like never interacting with a horse isn’t the best way to decide that you love horses. But what do I know? Sam is allowed to run off and escape horseback riding to play gymnast in a field by herself. As a counselor and later riding program director, I wasn’t allowed to let campers wander off unsupervised even if they were scared of horses, but again: what do I know? 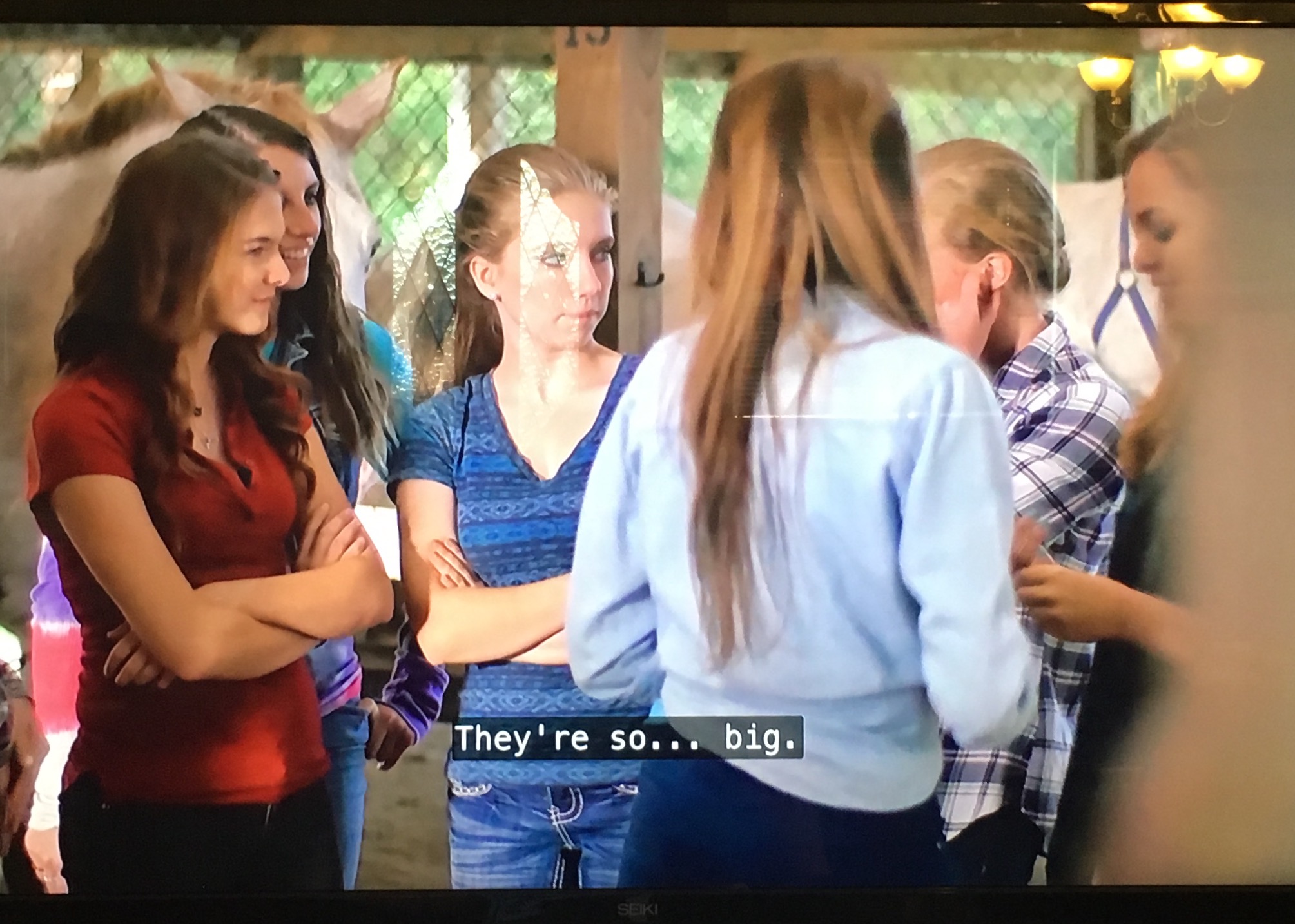 I feel like maybe there’s an extended metaphor here, but maybe that’s just my dirty mind

Lots of things happen and lots of camera time is spent promoting the camp, which – to be fair – looks pretty freaking amazing. Like, I’m pretty sure this entire movie and it’s predecessor are just extended promo pieces for Black River Ranch. But oh no, the camp is in financial trouble and will have to close down and the horses will all be sent to auction. And where will Miss Jessica get married now?

Finally, Lisa convinces Sam to try riding again because she should try vaulting and we finally get the line we’ve known is coming this whole time. 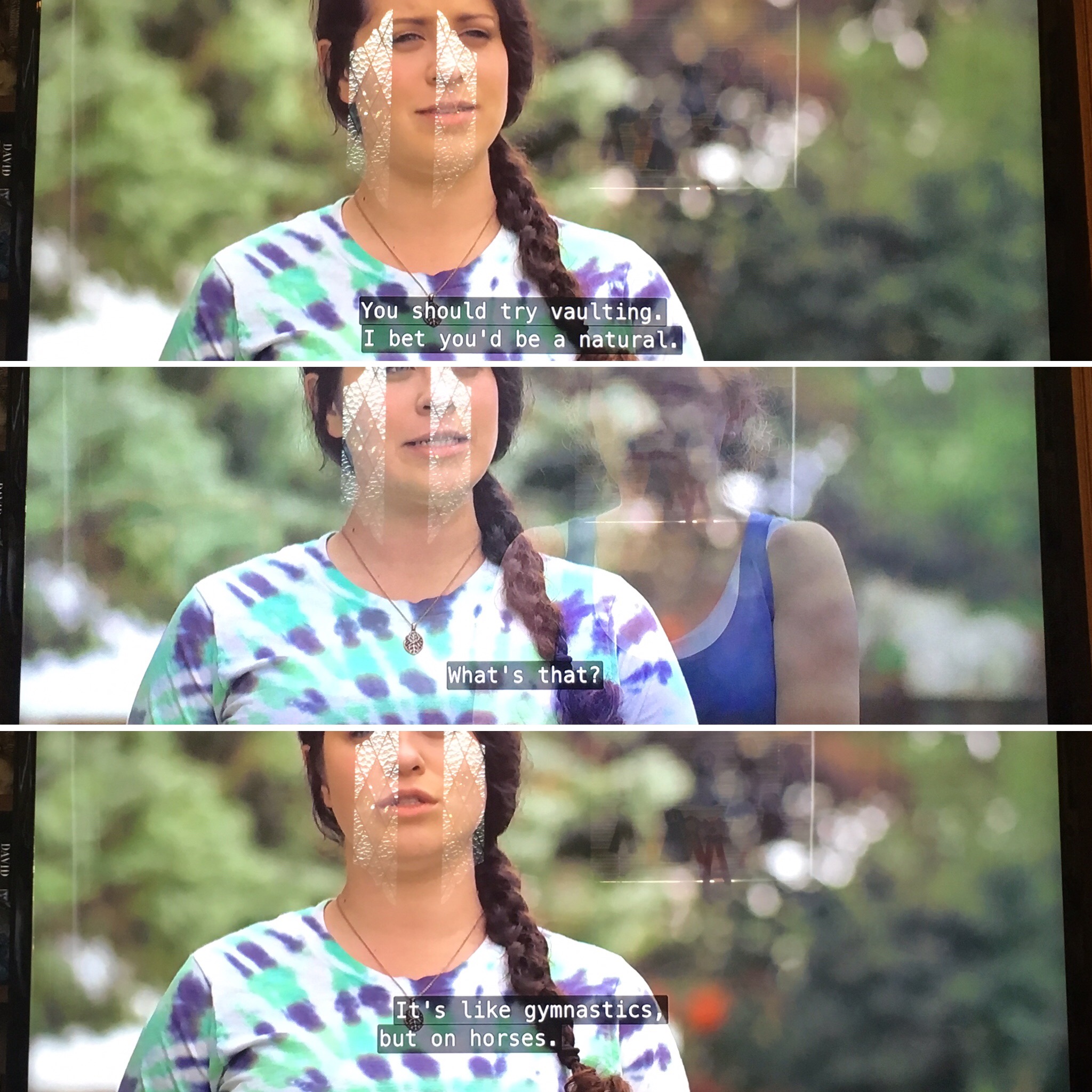 It turns out that Stacy is the best rider at the camp, which also apparently makes her the best vaulting instructor so Lisa makes some sort of pact with the devil to get Stacey to teach Sam. But Stacey is from the motivate through mental abuse school of teaching. That’s okay though because it leads to one of my favorite interactions in the film: 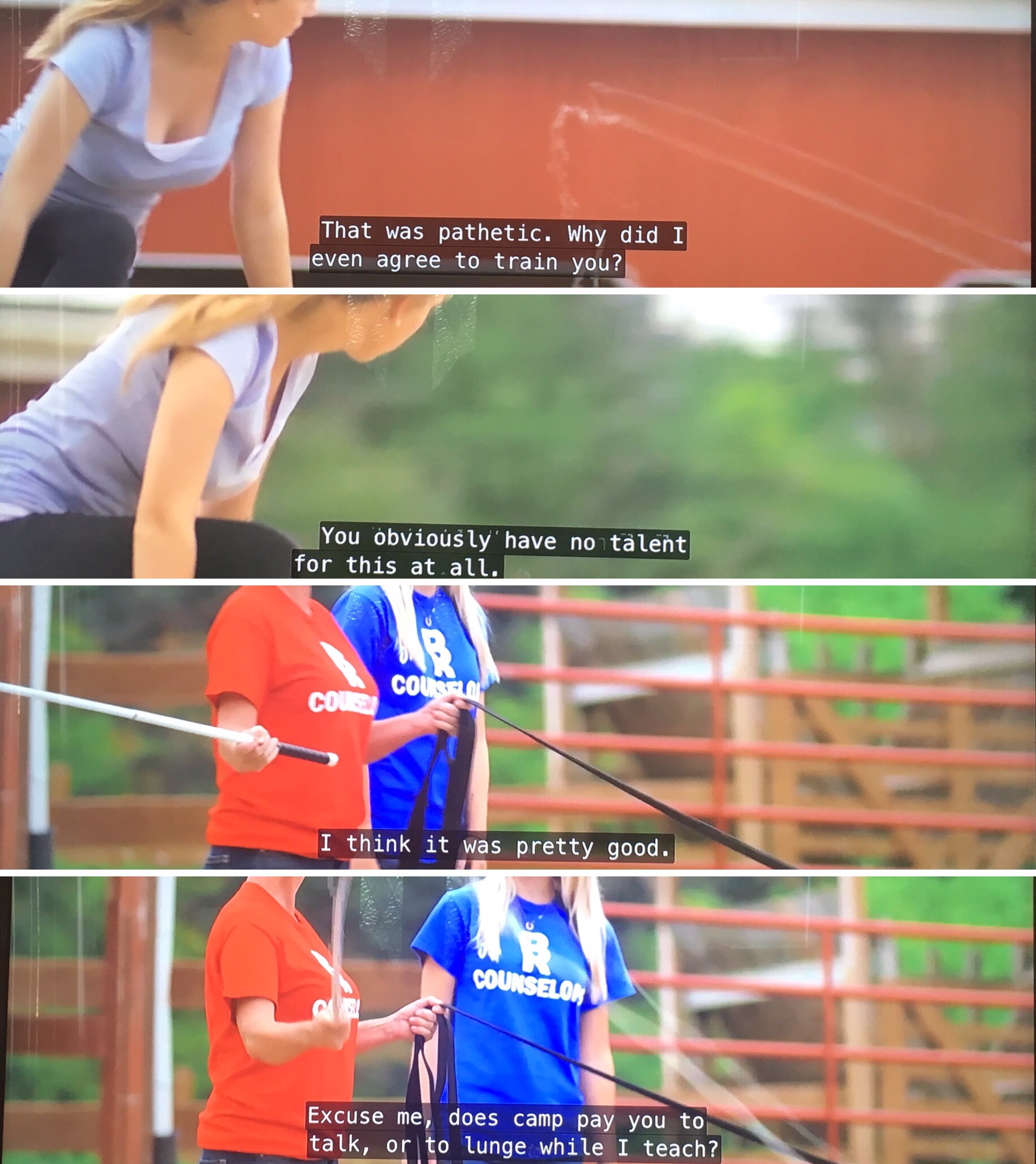 I’m pretty sure this woman is like the sole person in the film who actually knows what she’s doing with horses. While Sam is off fulfilling all her horsey gymnast dreams, Stacey decides to rescue the camp by having her dad buy it, but he’s not down for that. Because the government is stealing all of his money. 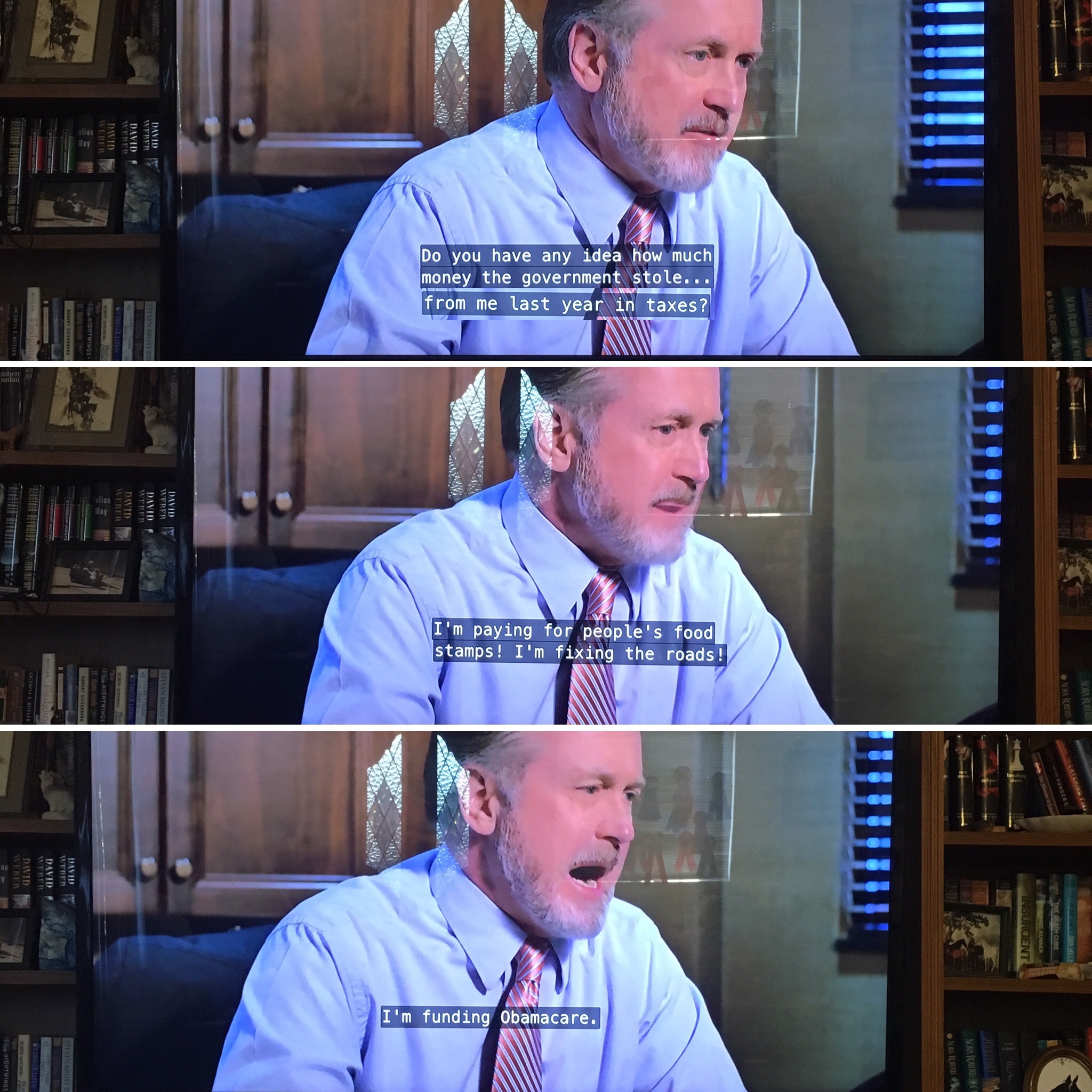 Everyone decides to hate Stacey because she didn’t buy the camp, but Lisa has a plan to get sponsorships for banners to put in the arena while Sam does a vaulting routine. Because Sam is that famous and Lisa might not be the best rider, but dammit, she can make a video. Then an entirely predictable sad thing happens and Sam decides to run away on horseback. She’s in luck too. The horses are kept in cross ties over night for all your easy access midnight runaway needs. 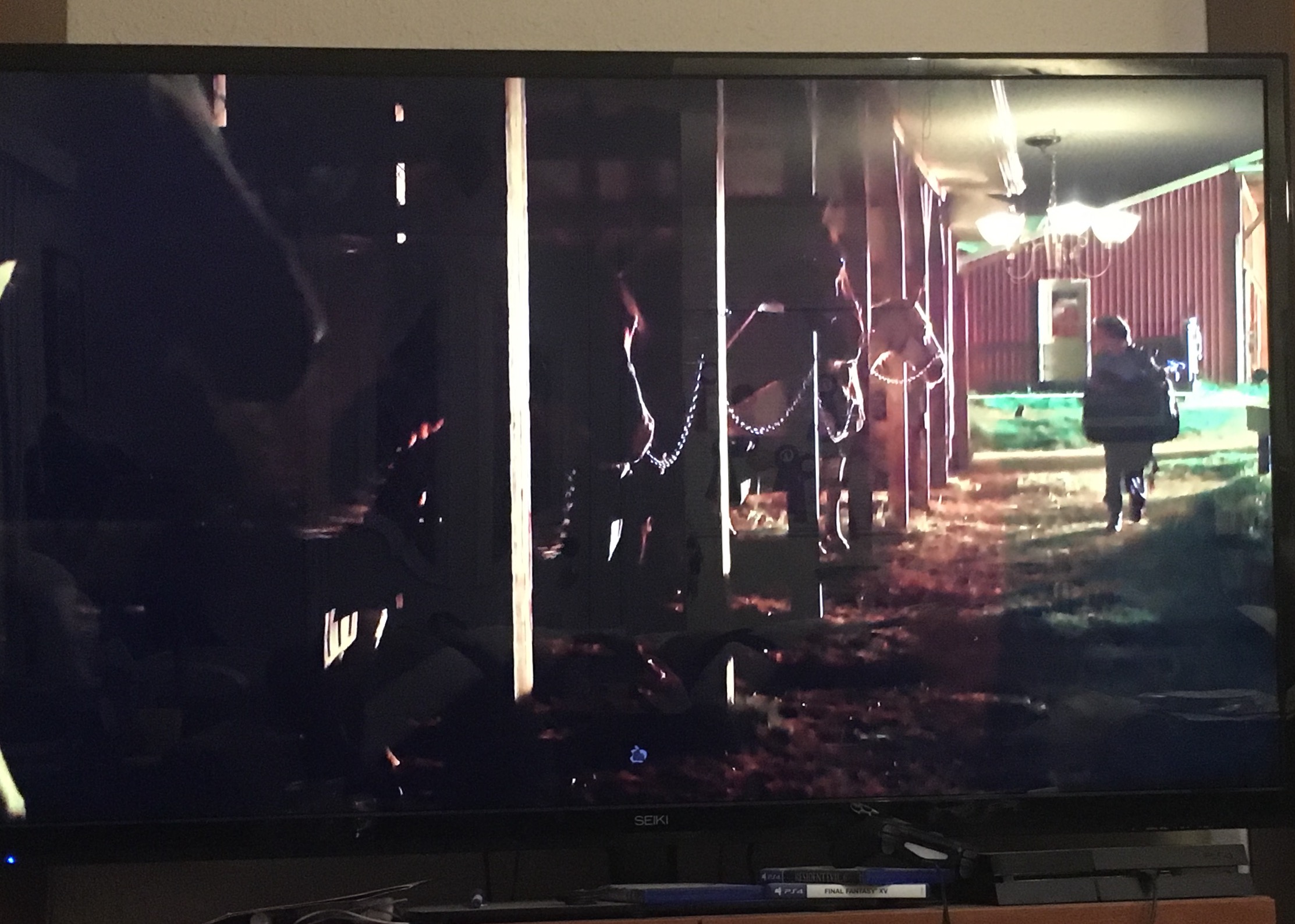 So then there’s like a bunch of search parties and the cops get involved and Stacey and Lisa find her by riding out at a pace that is literally slower than grandma could hobble with her stroller, but it still somehow faster than everyone else. Sam has to return home and it looks like the camp is doomed, but then – because reasons – Sam returns in the nick of time and they make the video. 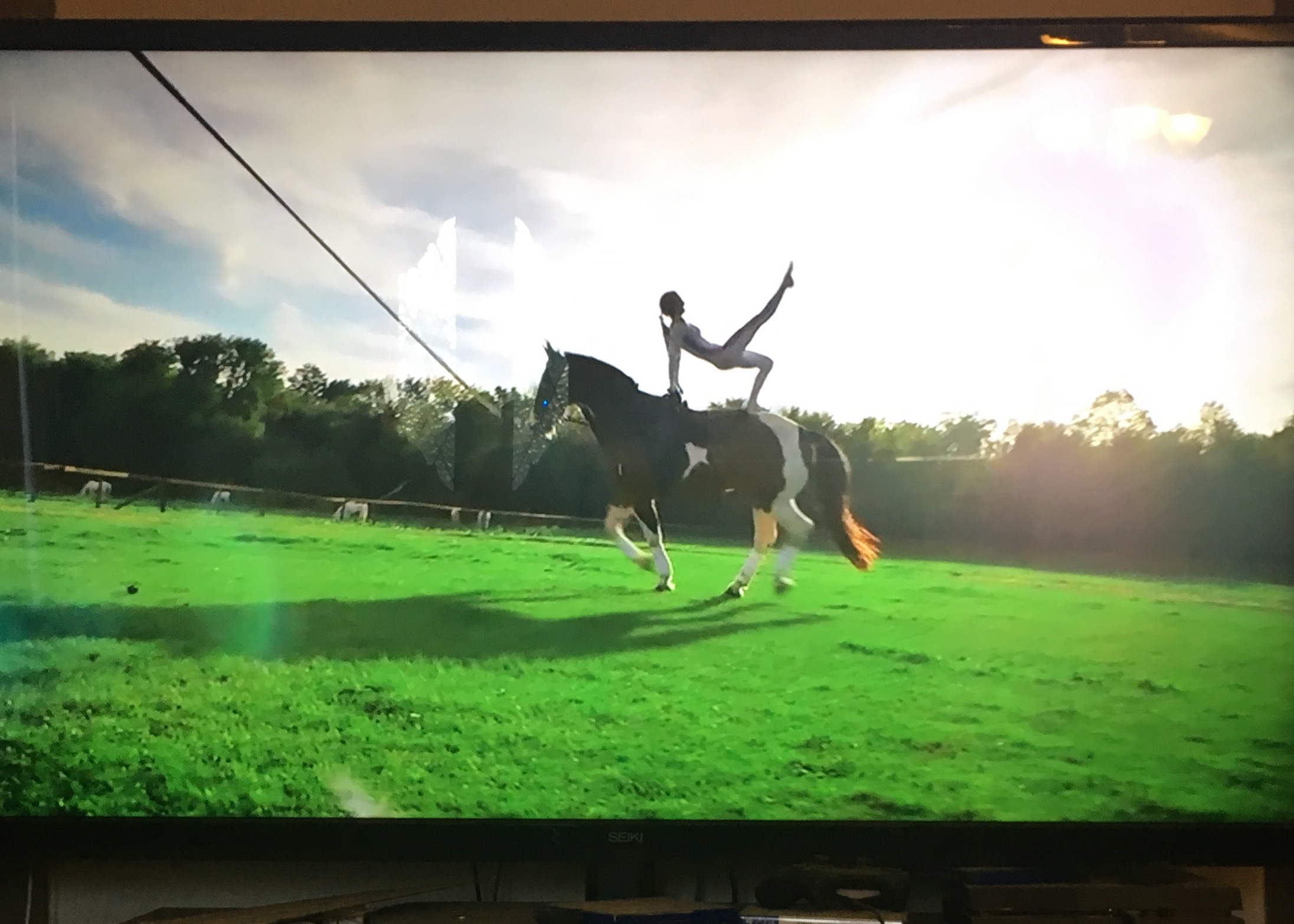 Through the magic of horse movies, Sam has also miraculously learned how to vault during her time away. And despite there being absolutely NO sponsorship banners surrounding the completely nonexistent arena in this video, the camp is saved. 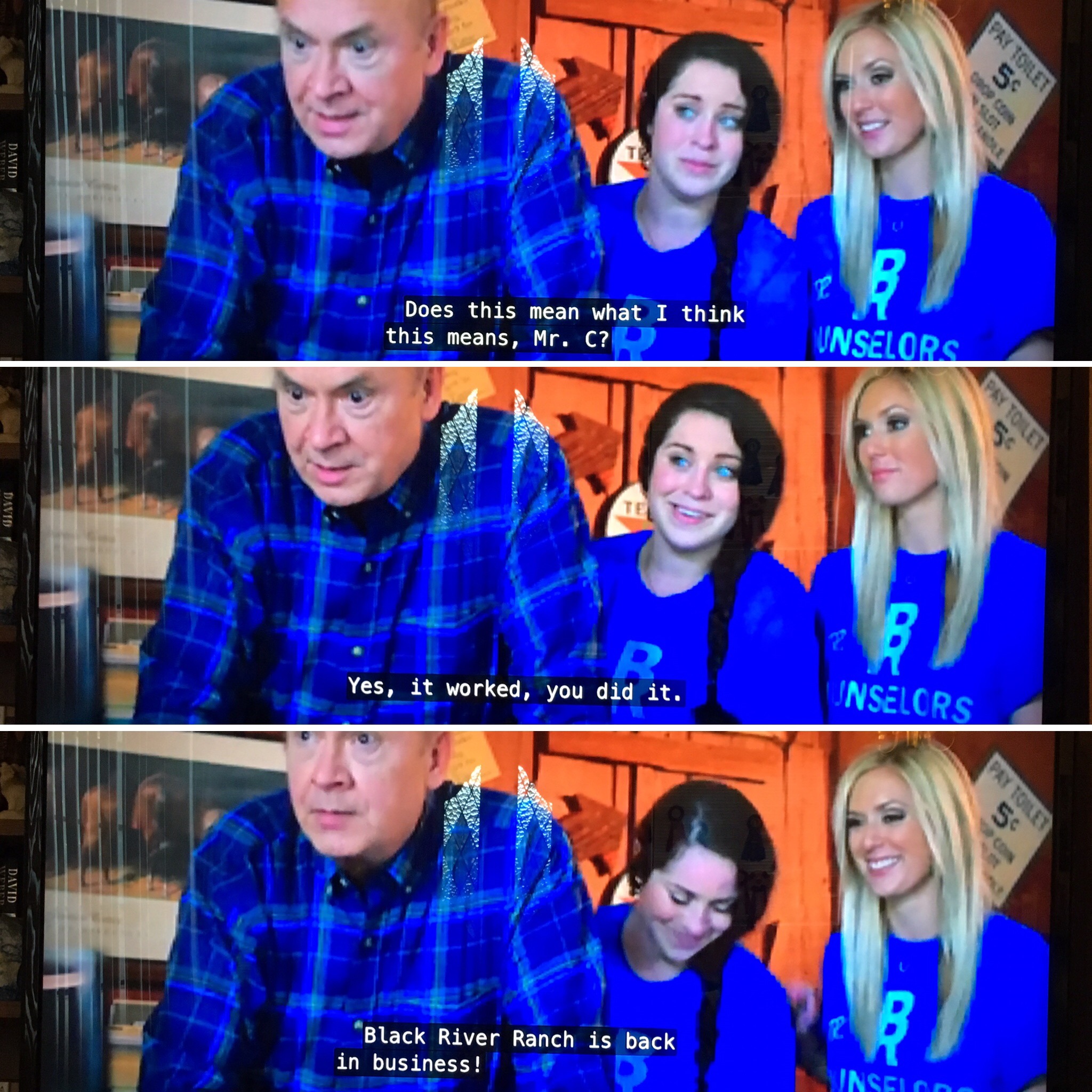