Last weekend we returned to Jack Brooks Horse Camp in Sam MacDonald Park for a weekend of horse camping. This time we joined the LAHHA group for camping, but then no one showed up Friday night and we had the campground to ourselves. The group organizer called us to apologize and we were like, no worries, we’re perfectly happy to camp by ourselves. We were just surprised no one else wanted to be there. It was crazy hot down at home and nice and cool up in the redwoods.

We got there around 4:00 and let the ponies chill while we parked and set up camp. Then we took them for a short ride just to let them stretch their legs. Levi had a lot of dancing and prancing to do as well since he was a ball of pent up energy. But he’s got no stamina so he got over it pretty quickly. We just rode about a mile down the trail to check out the views before heading back.

Back at camp we made salmon and corn on the cob then hung out by the campfire. I love relaxing by a fire and it was actually nice to have the site to ourselves and not have to socialize. I can just stare at a fire for a while. Plus s’mores are the best. Food is like the half the fun of camping for me.

The best part of camping is the food. #horsecamping #camping #smores #campfire

The next morning, the LAHHA leader arrived and we went out for a trail ride together. About half way through Nilla was feeling slightly gimpy. She had broke one of her hoof boots and was going barefoot so I wasn’t sure if she was just rock sore or if her theoretically healed injury was not so healed. I didn’t want to risk anything so we cut the ride a bit short. 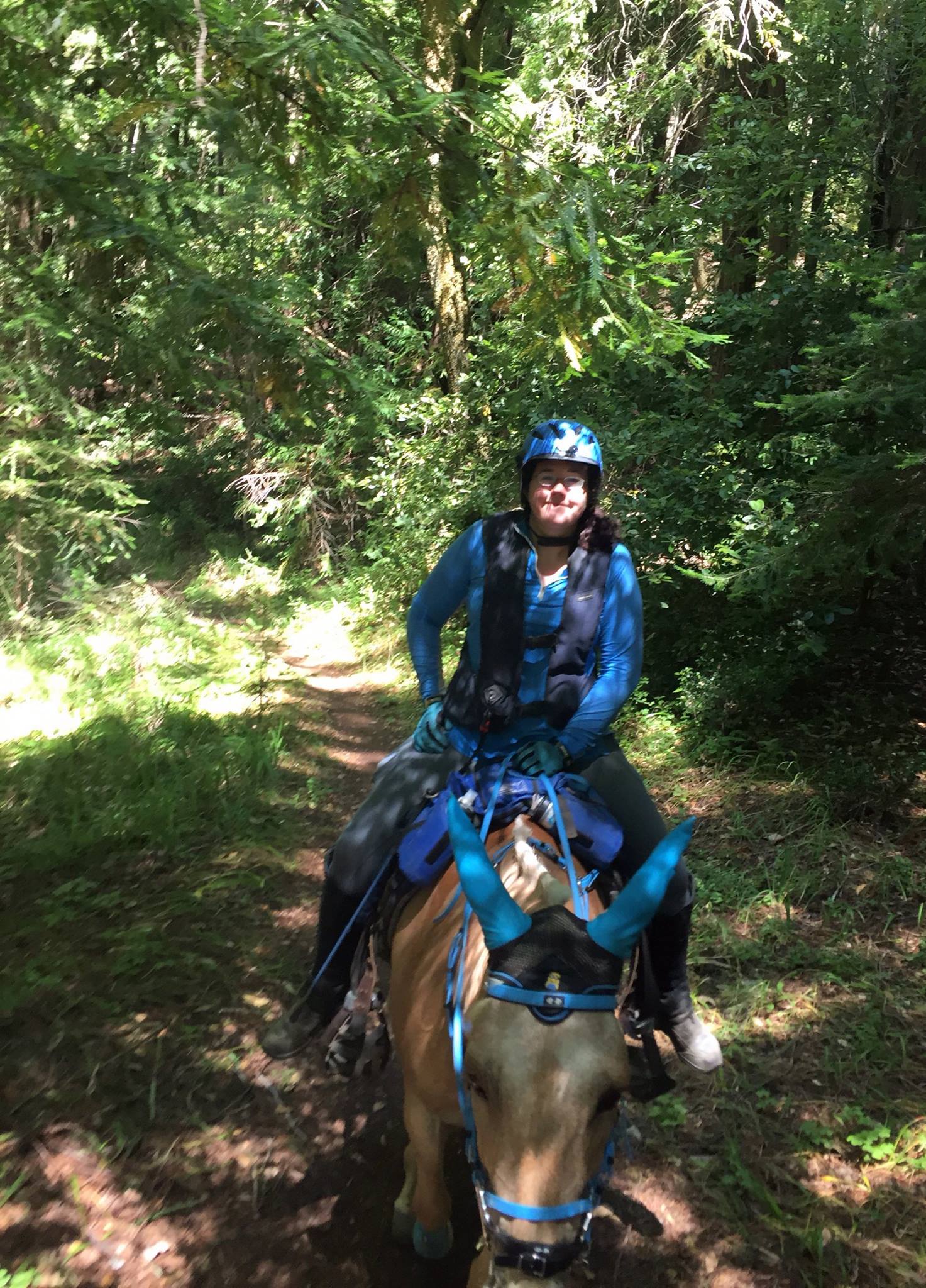 I wish we could have kept going. It was nice in cool in the redwoods and so pretty. We did stop at a different viewpoint on the way back for a photo opportunity. Nilla continued her usual routine of refusing to put her ears up as soon as a camera came out. 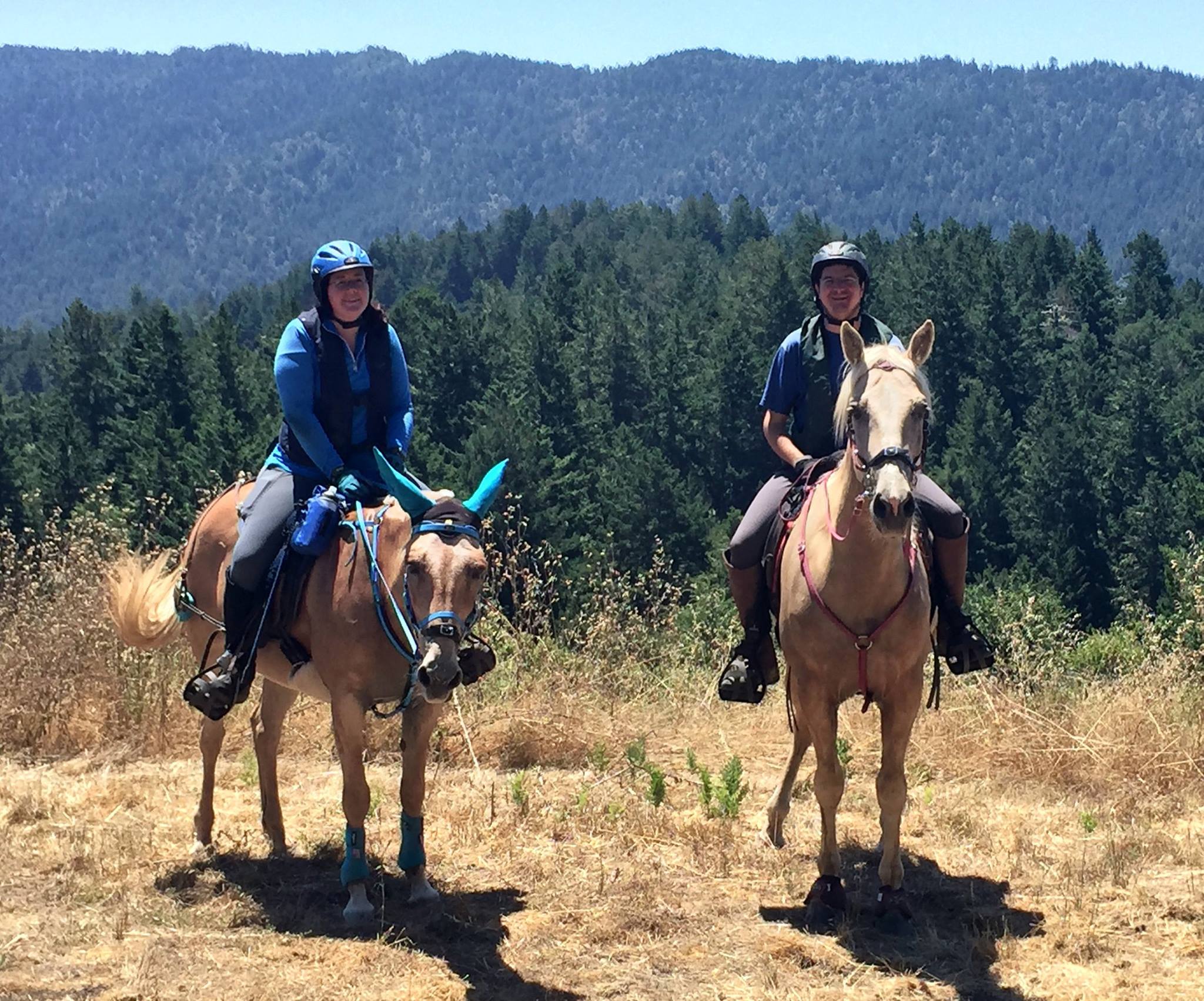 Back at camp, the ponies got baths and then covered themselves in dirt. One of the other campers gasped when Levi rolled in the dirt and asked us why we let him do that. Well, he’s either going to roll out here in the dirt or roll in his stall and possibly get cast and also there’s poop in there so really, why not. I have long since given up any ambition towards keeping my horses clean. We had lunch and then we take some time to feed the ponies cake pops. 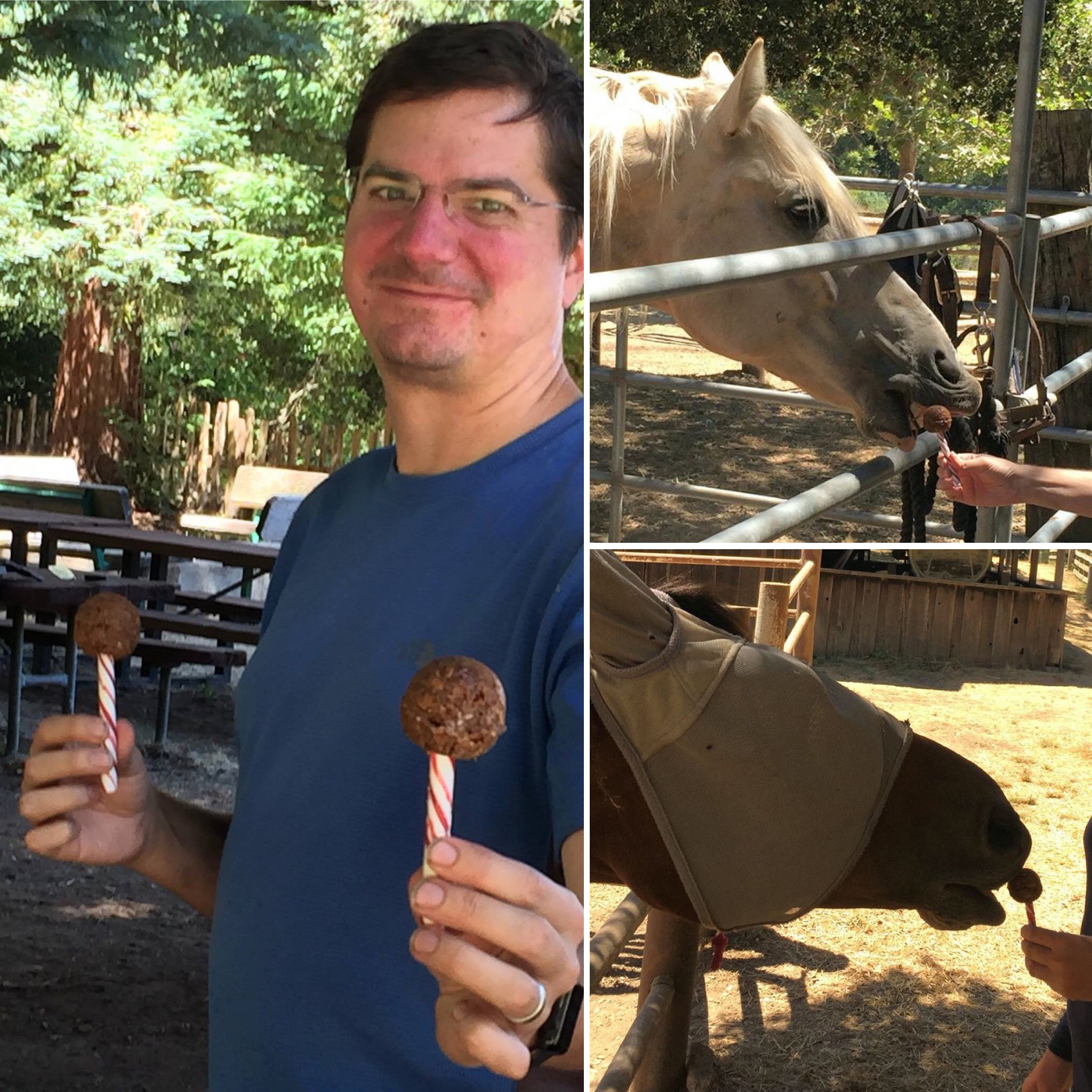 Two additional couples arrived in time for dinner and we had a nice potluck and talked horses all night. There was so much good food including the chocolate cake pops that inspired me to make cake pops for horses. 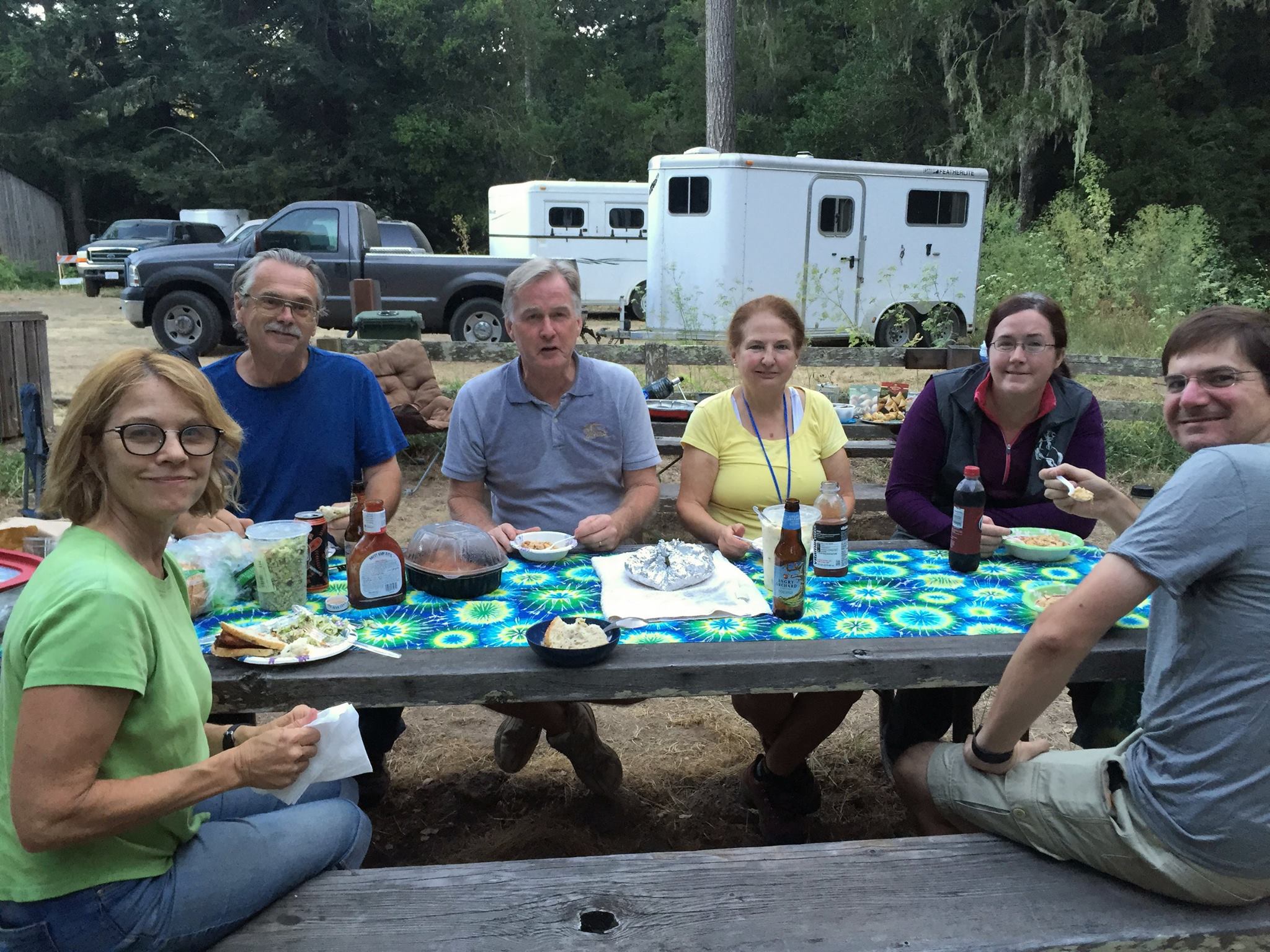 The next day we decided to go out on our own for a short ride, but Nilla was feeling even more off so we only made it about a few minutes down the trail before turning back. The other group hadn’t left yet, so my husband joined them while I put Nilla away and hung out in camp reading and watching the wildlife. It sounds like a really missed out on some really pretty trails though. 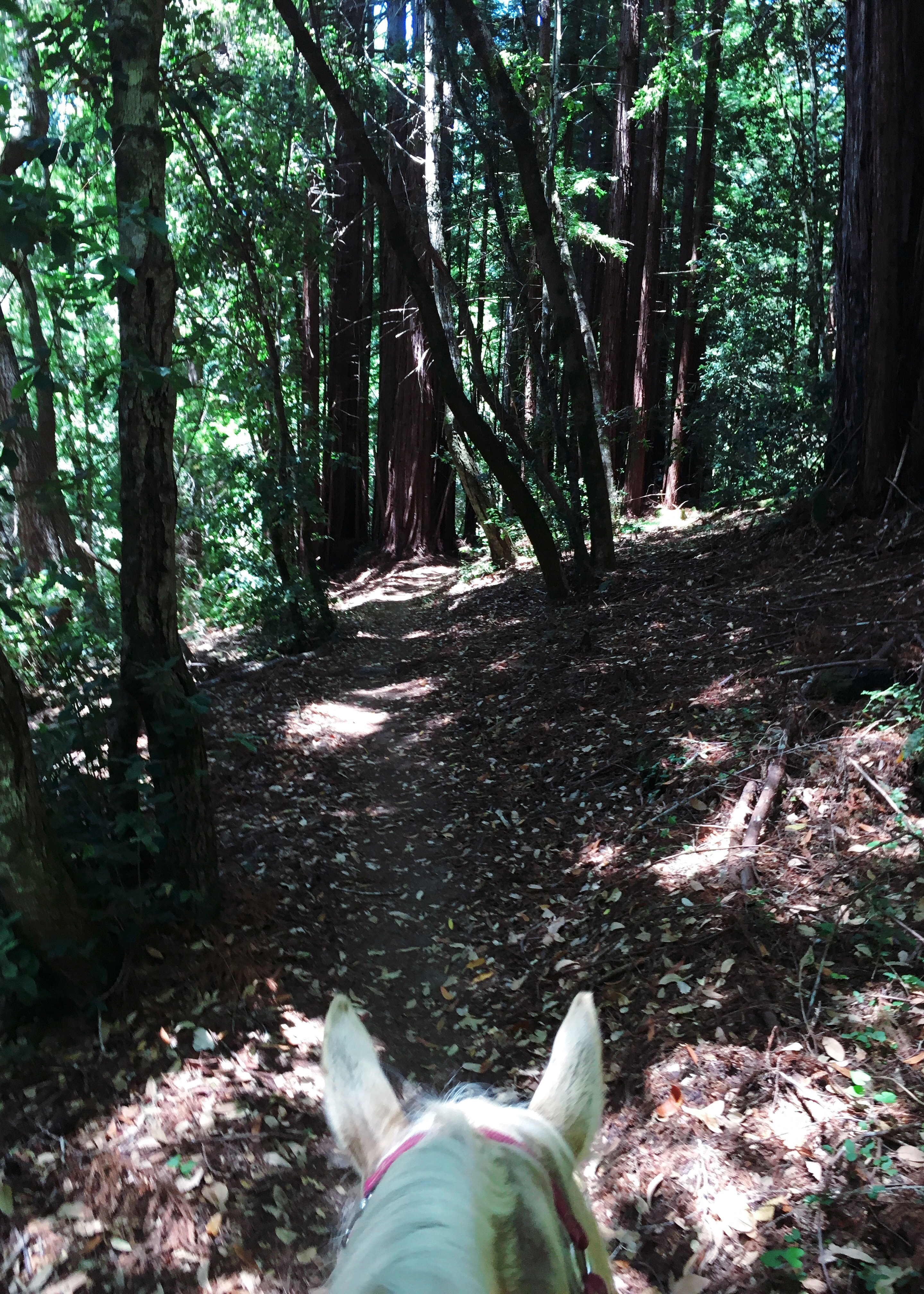 After last year’s terrifying trailering incident leaving the campground (our trailer got stuck trying to go up a dirt with loose gravel hill and I had to unload the horses on the hill) we decided that my husband would drive out with Levi and I would walk Nilla down a shorter trail and meet him at the main parking lot.

Nilla was surprisingly okay with this at first because I think she thought she was just going for a grazing walk. Then she slowly realized she was alone in a place she’d never been before. I was getting her to shuffle along though until some hikers came around a turn and she tried to rear and take off. Multiple times. Luckily, I was prepared for her sh*t and had gloves on and had pulled the lead rope across my body (not tied or wrapped or anything dangerous, just my right hand on the lead rope near her and the lead rope across my front and my left hand behind my back with the end of the line) to give myself some leverage. So she got nowhere with her antics and we eventually made it down the trail.

It’s really such a gorgeous park; I’m glad I did the short hike to see some more of it since I missed out on riding that day. Despite Nilla’s gimpiness, I had a great weekend. My husband enjoyed riding Levi and said he was a really good boy on the trail ride.Levi certainly enjoyed himself. He even led for most of it. I really hope we can get back there some time this year for more horse camping. Maybe our horses will finally decide to not be injured and make this actually possible. Nilla has another vet appointment regarding that so fingers crossed for the mule.