I’ve been looking forward to taking Levi to the LAHHA Schooling show for a while because it’s the perfect schooling show: very chill, run efficiently, and does a great job of preparing horses for real shows (real flowers and jump decorations, etc). Since Levi is still in the state of being (mentally) young and stupid, I want to take him to a lot of shows so he can practice keeping his brain in his head. We had a lot of fun at the show last year and all the proceeds go towards keeping trails open to horses so it’s a cause I support as well.

The show started with warm up rounds at 8am and then the actual classes started at 9. So I had a choice the night before to get up early and do a warm up round or sleep in. Guess which option I chose: 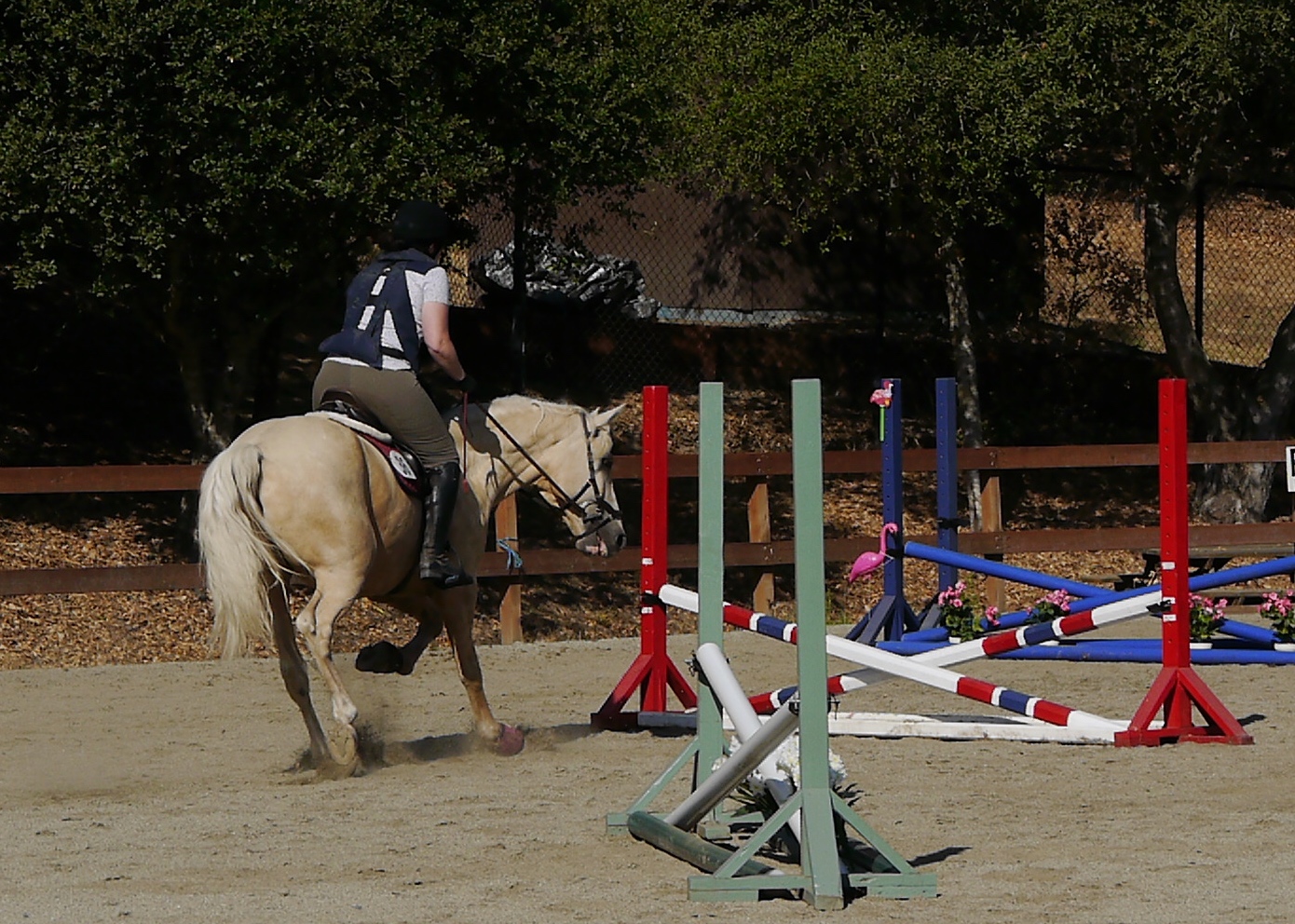 For a horse that always has to stop at the first jump, you’d think I’d sign up for warm up rounds. But you’d think wrong. I did sign up for the last class of the 18″ division to be my warm up round for the 2′ division. And Levi stopped hard at the first jump. There weren’t even any flowers! He awkwardly hopped over 2, then slammed to another stop for #3. This time he proceeded to knock the jump down and then act terrified of it so we actually had to circle around and re-present after it was fixed, but got it on the second try. 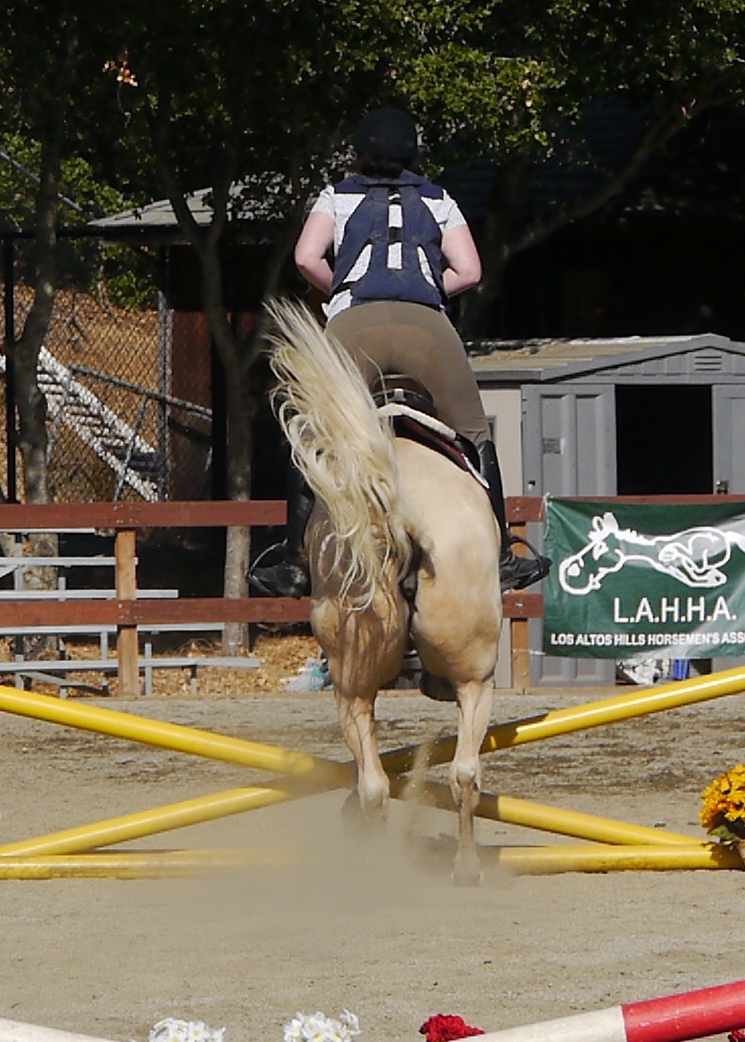 There are no words for jump #4 so I’ll just leave you with this: 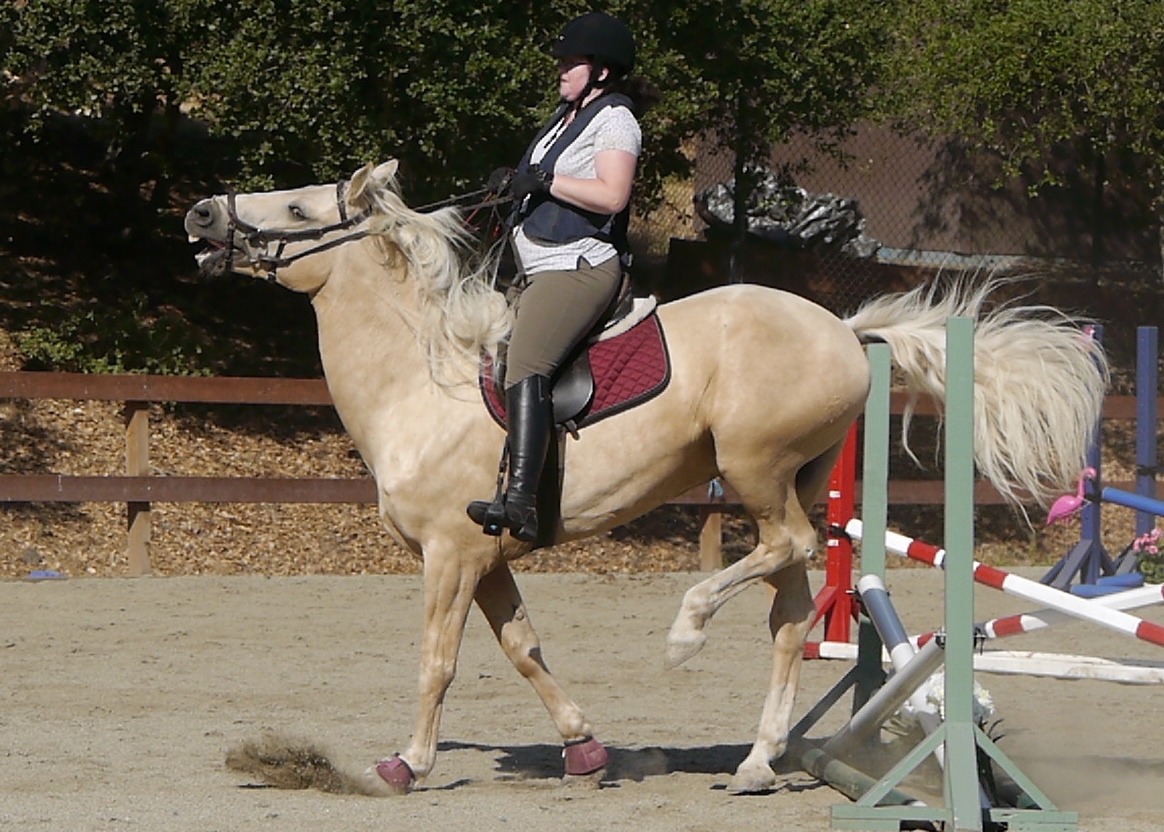 He tried to stop at #5, but I made him walk over it, then he actually jumped #6. By the time we got to #7 it was almost like we had done this before. He peaked a little at #8 because flamingoes, but didn’t actually stop, so, you know, #winning. 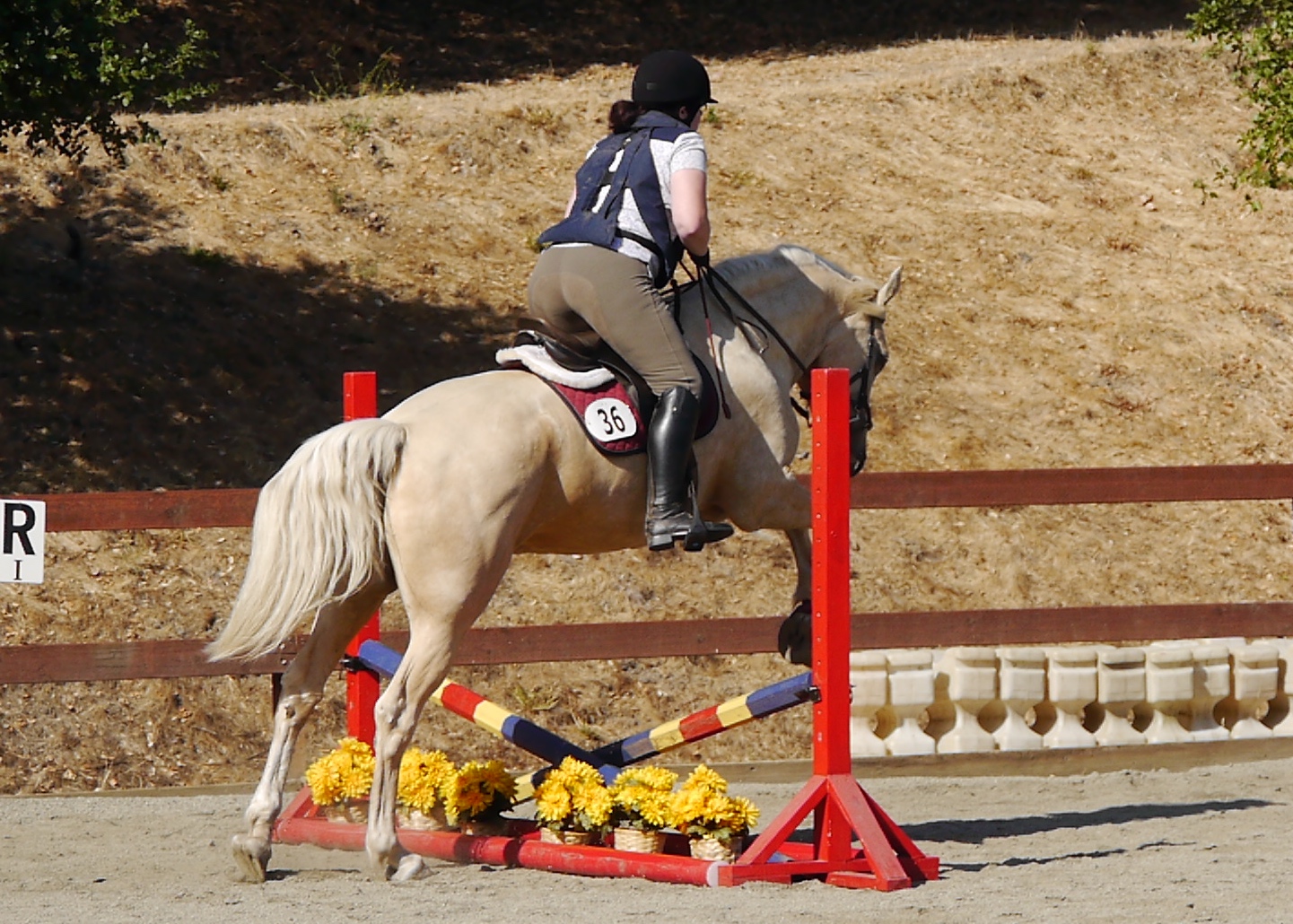 We got a well deserved 3rd out of 3 for that disaster of a round. But I didn’t care. We did the whole course with me patting him and telling him he was a good boy every time he jumped.

Our next class was 2′ Hunters and Levi was getting more into it. He was actually eager to jump, though this resulted in some overenthusiastic jumping for hunters, but whatever; I never said we were hunters. 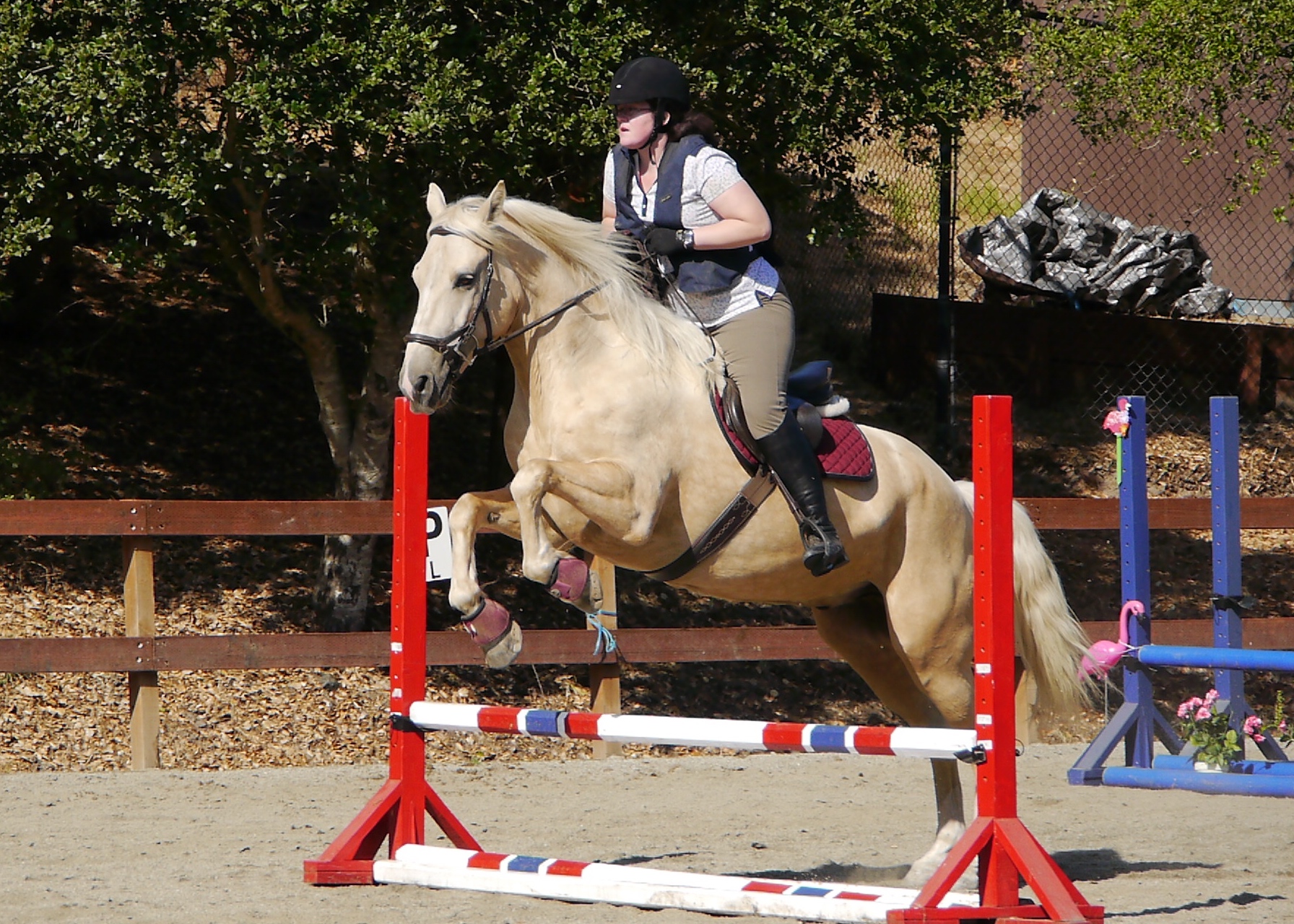 At least he was having a good time. And he gots lots of pats and praise for being a good boy. 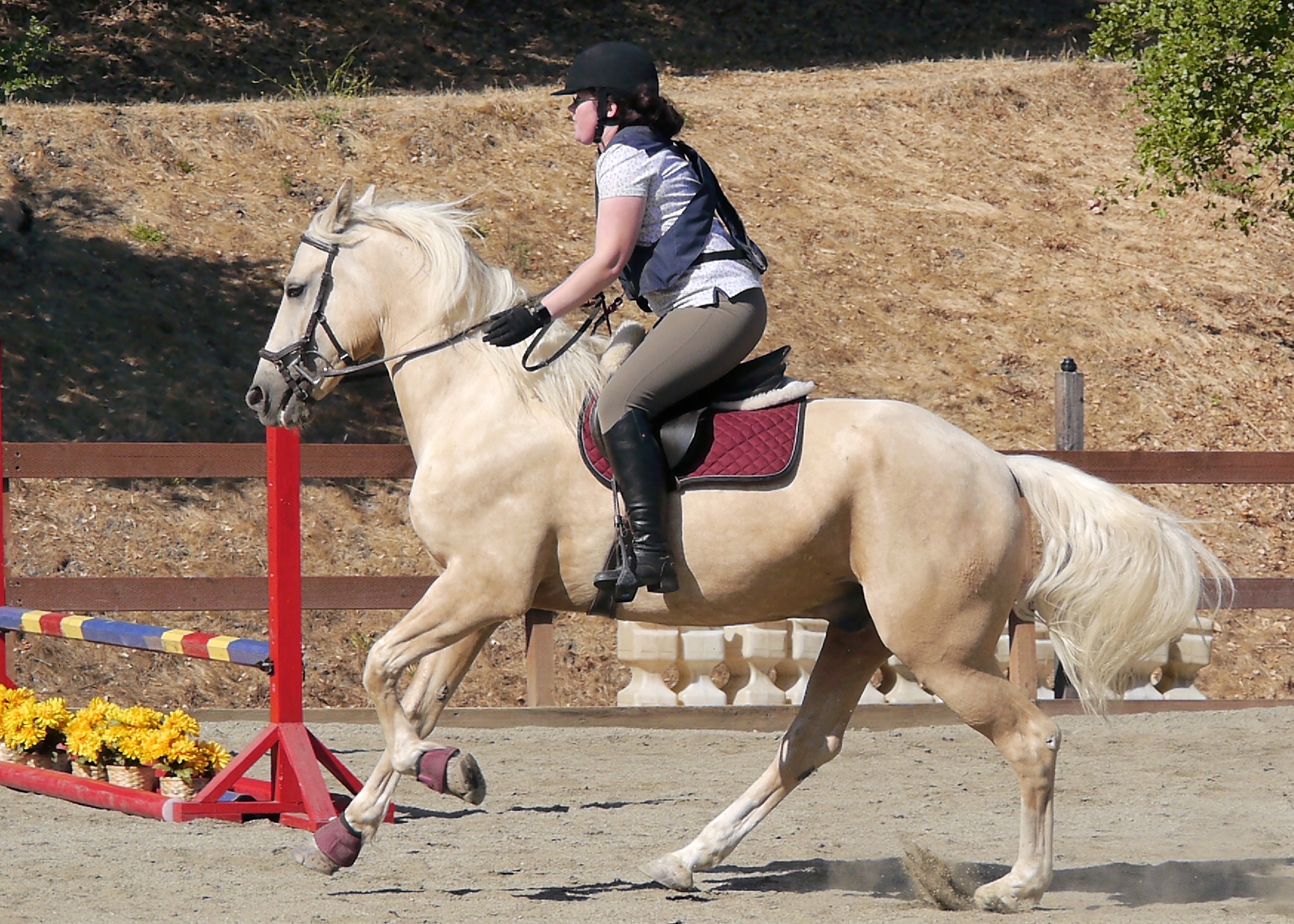 I think we got 2nd of 3 for the hunter round (I can’t find that ribbon) and then it was on to 2′ Equitation. Levi was definitely getting more and more into it and more relaxed. But I’m not good at Eq so we got 2nd. 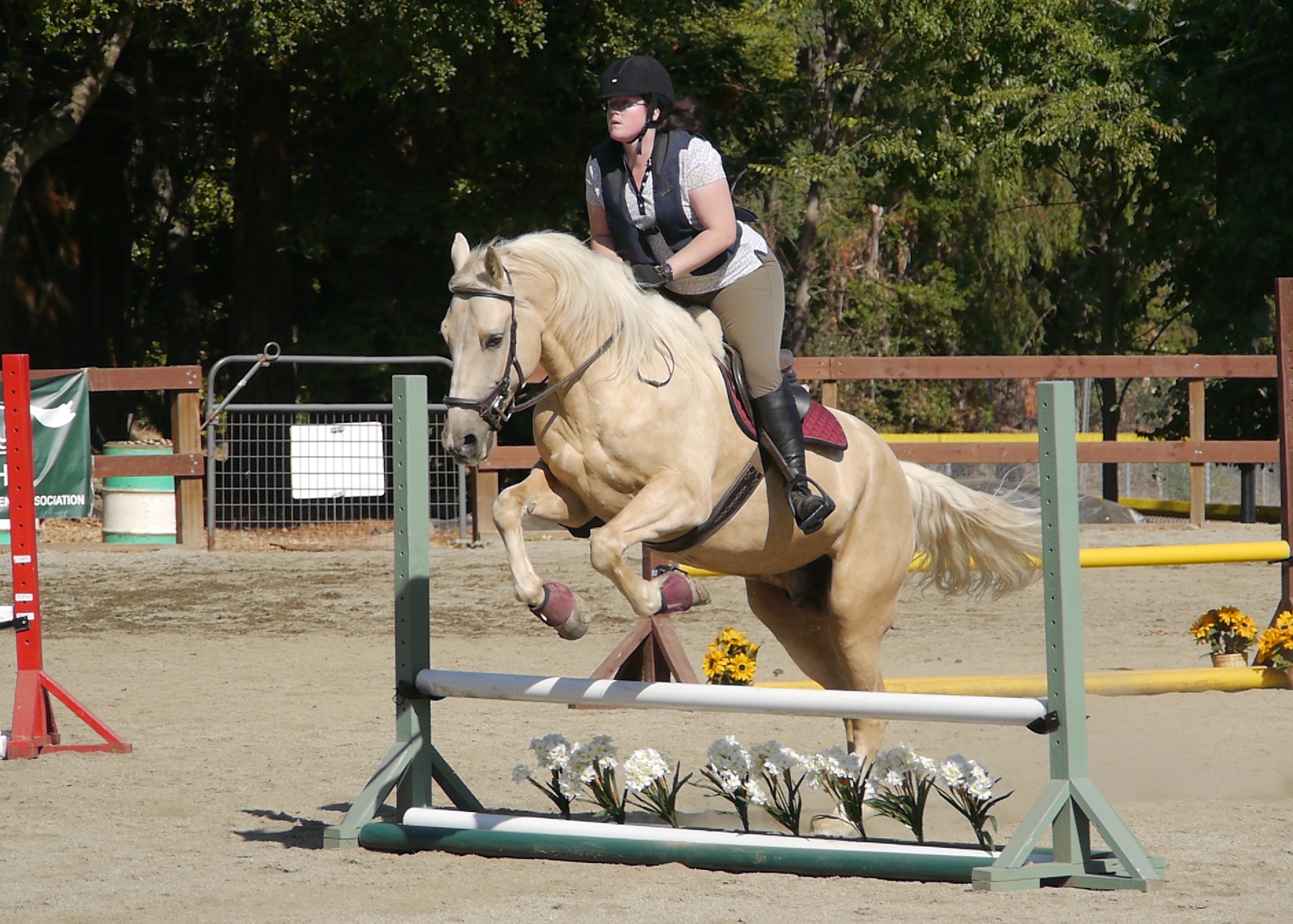 Finally it was time for our jumpers round. The course was actually pretty hard with 3 tight rollbacks and a lot of turns. Levi has never done a rollback before. But we went in there and got it done. We did have to trot the first rollback and for the second one there was room to take a long path and I did that. 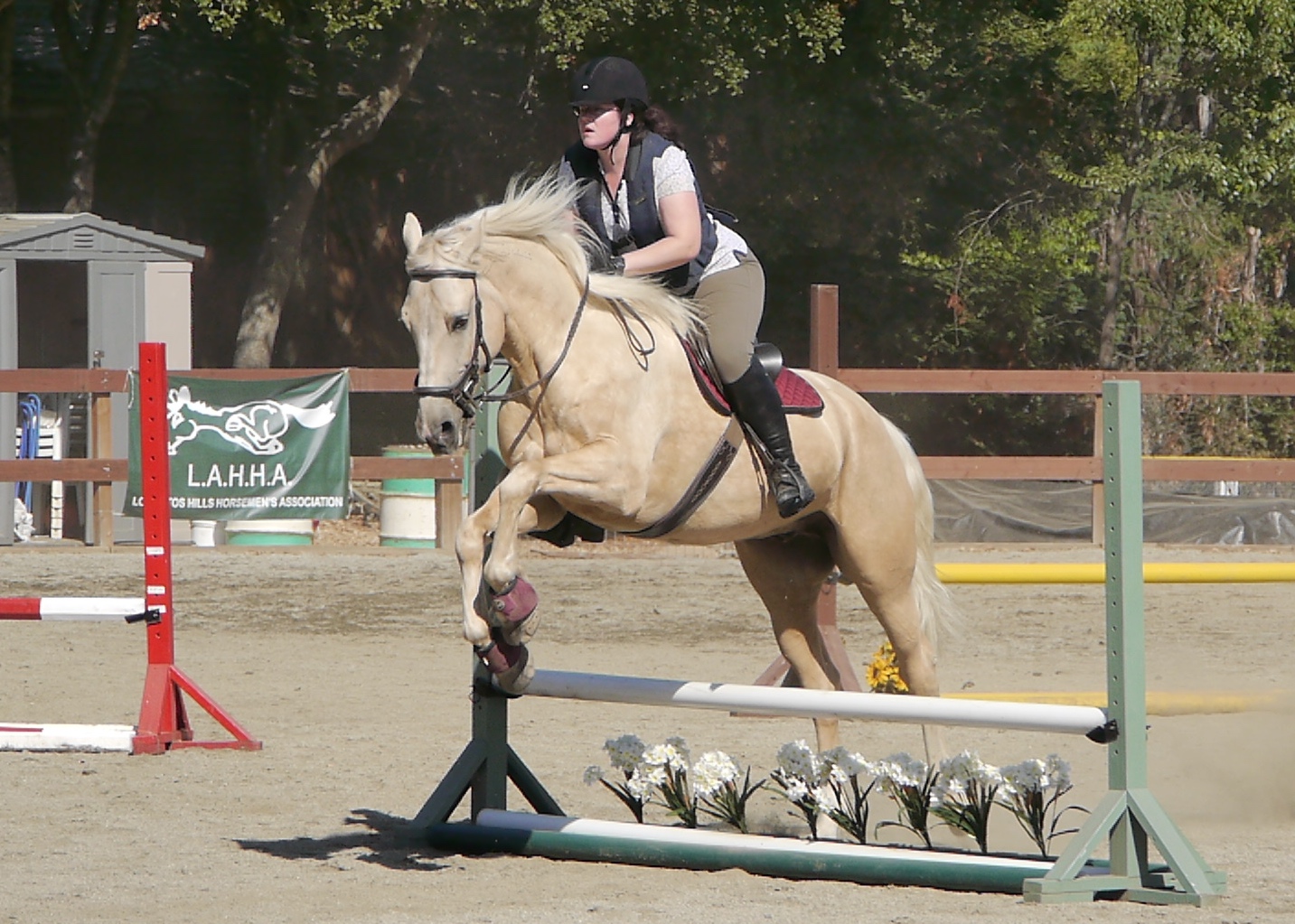 For the rollback from #5 to #6 I got cocky and tried to keep cantering. We wiggled all over the place, got a bad spot, and he hit the jump hard. 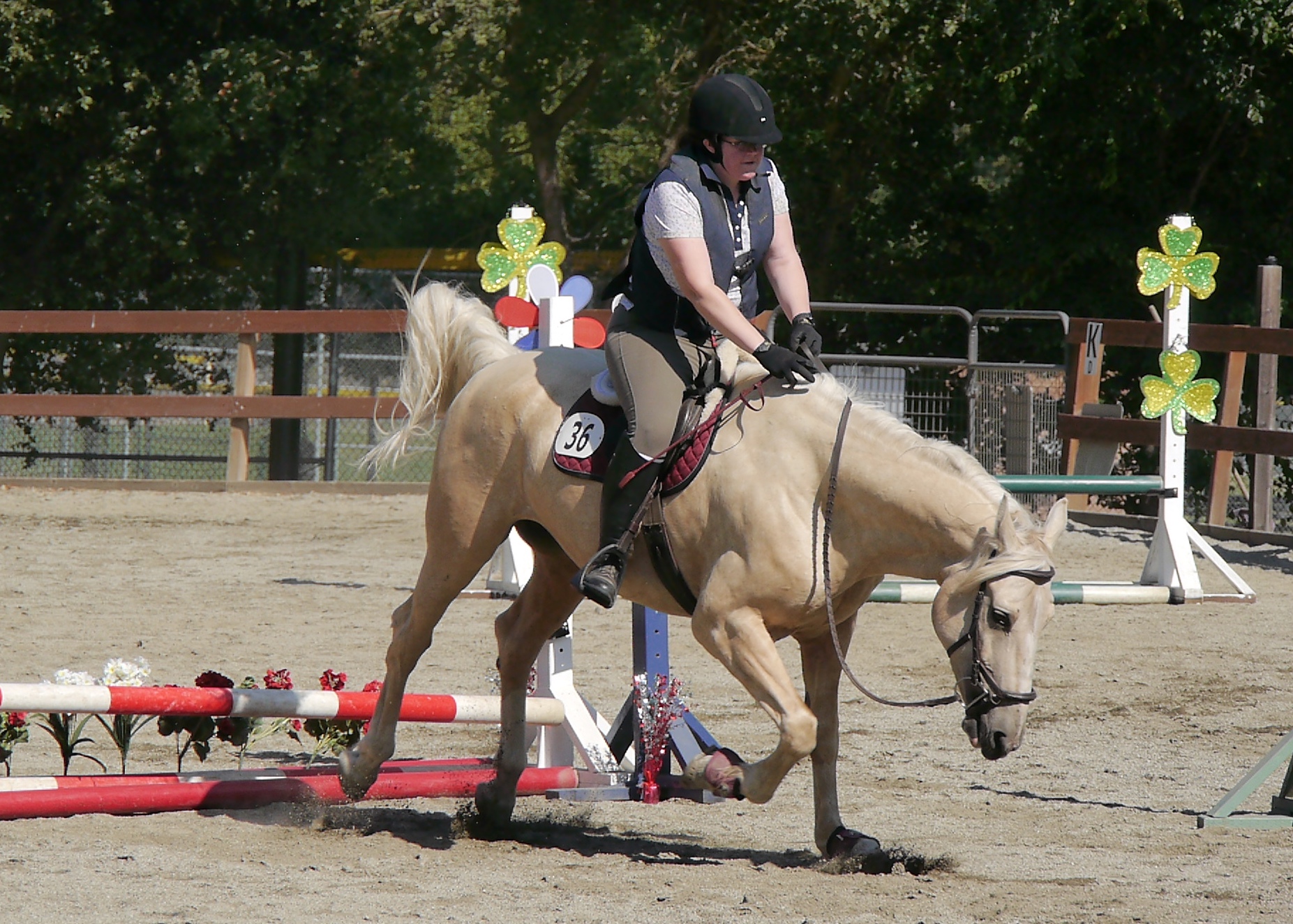 Thankfully, this horse is ridiculously forgiving and carried on to #7 and #8 like a champ. The other girl in our class knocked the same jump down so we actually won on time and got 1st out of 2.

Levi had a bit of a break after that while my husband and Eugene did the ground poles division (I’ll do a full post on that tomorrow, but Eugene is still rehabbing his stifle and not allowed to jump yet). I took Levi’s bridle off, but left his saddle on and he hung out in a little paddock eating hay and knocking his water over like an a$$hole. Then I got back on for 2′ Hunter Hack. 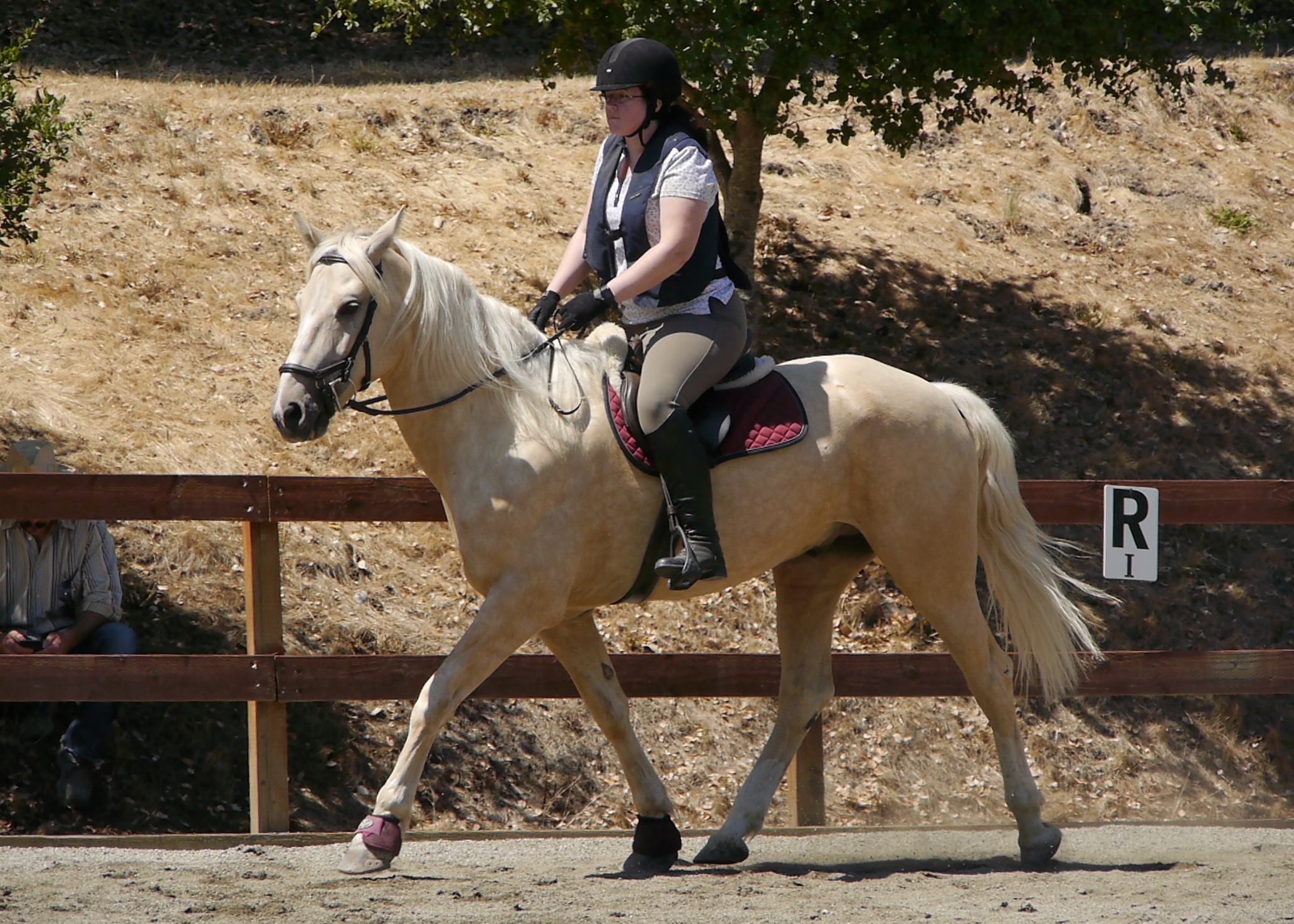 I generally like hunter hack classes. They reward a more forward way of going and being a good, brave, packer type of horse wins over fancy, but skittish. At least, that’s how it was explained to me by different judges, but they were schooling shows so who knows. 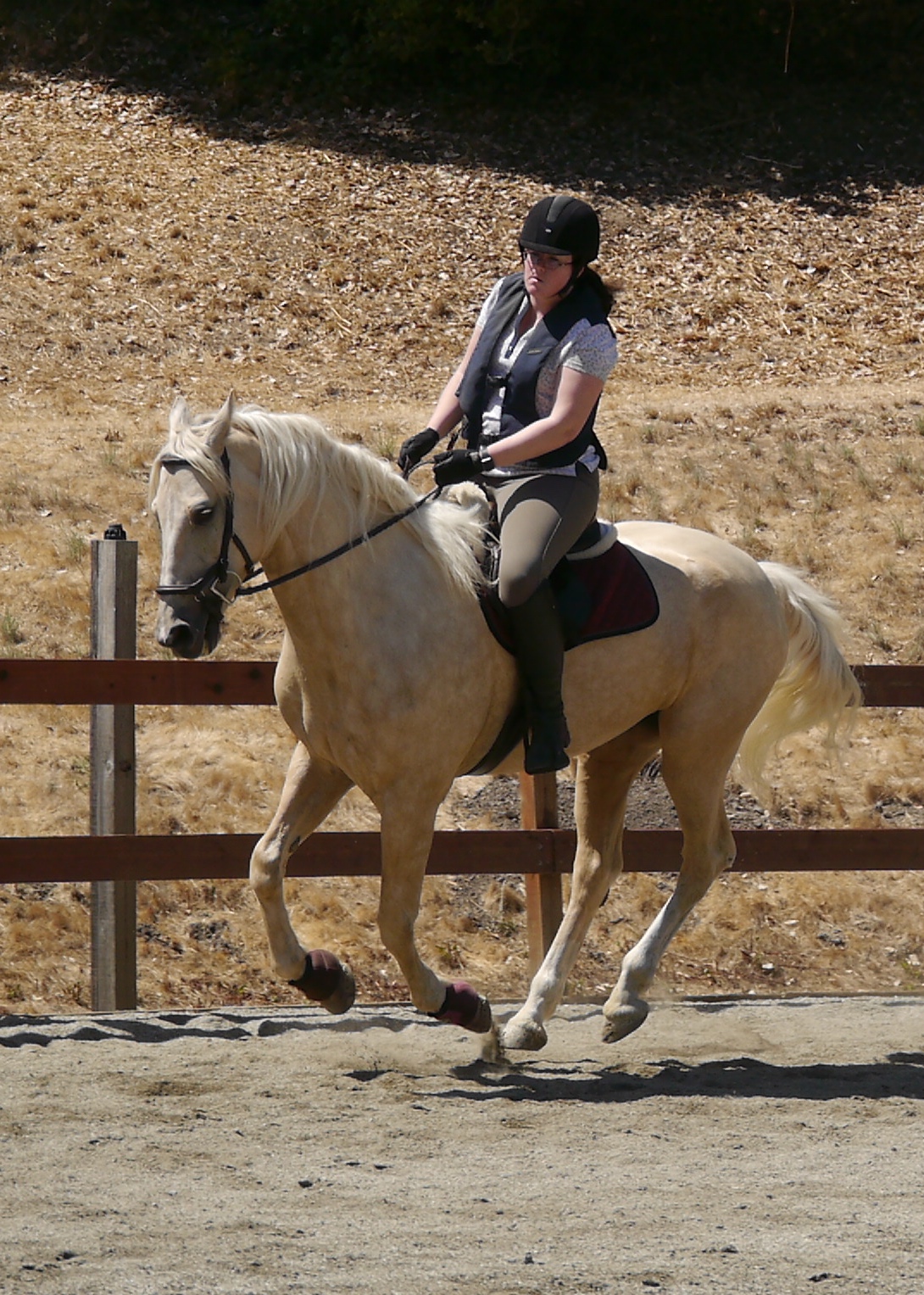 Levi was really on the cues and listening to me. He took both the jumps in a nice line without breaking pace and getting the striding right on. 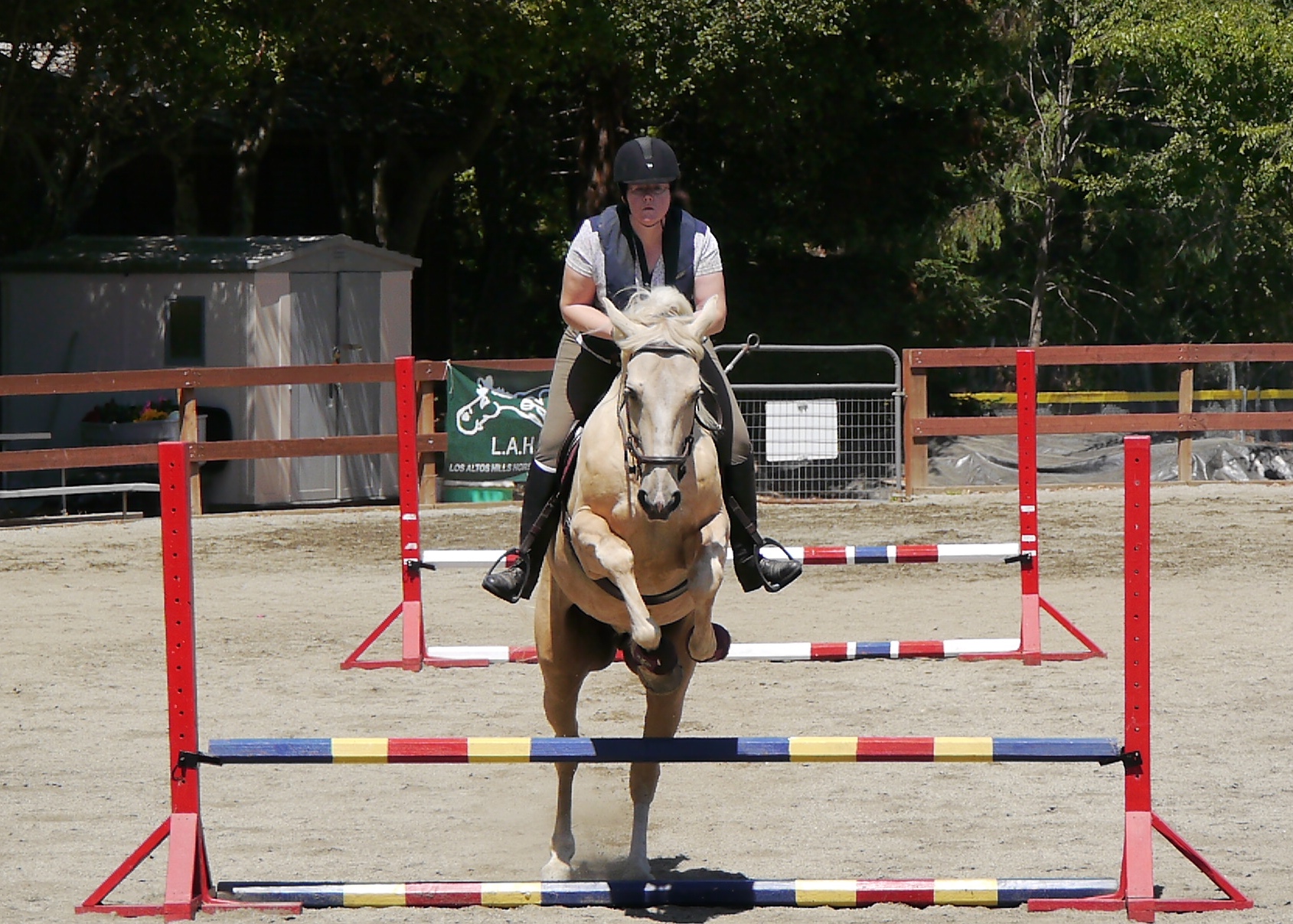 We ended up getting 1st out of 3 for this class and then Levi got to have a nice break for lunch. After lunch he got conscripted to do the Walk/Trot classes with my friend (separate post on that) and I did Open Equitation on him. 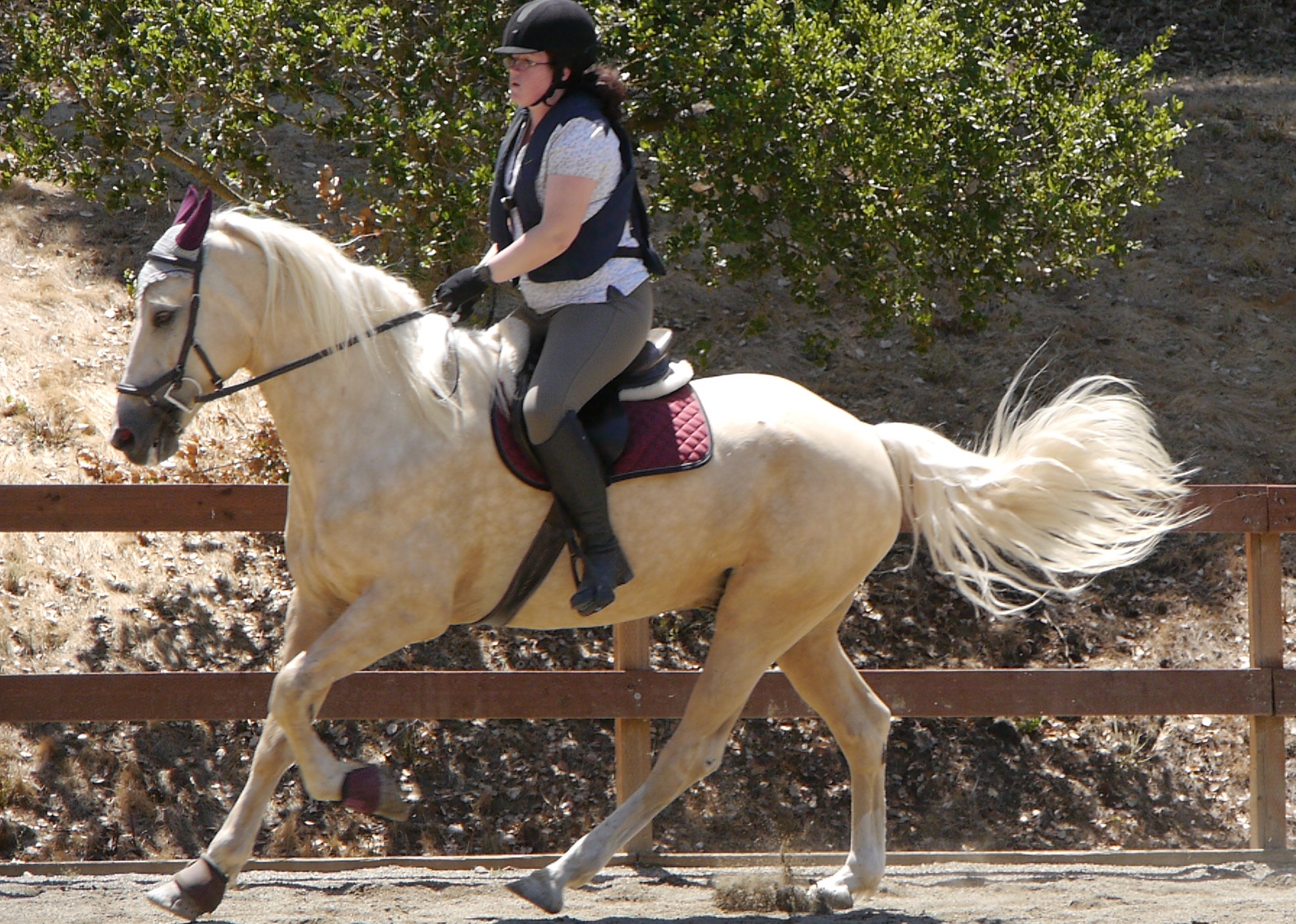 I honestly cannot tell you why I signed up for open eq instead of open pleasure. My eq has been and most likely always will be terrible. I actually think we would have won it if we hadn’t had an argument about the final canter. Levi’s lazy on a good day and on this day it was freaking hot and he’d already done a bunch of jumping classes plus the W/T classes. We got 2nd of 2. 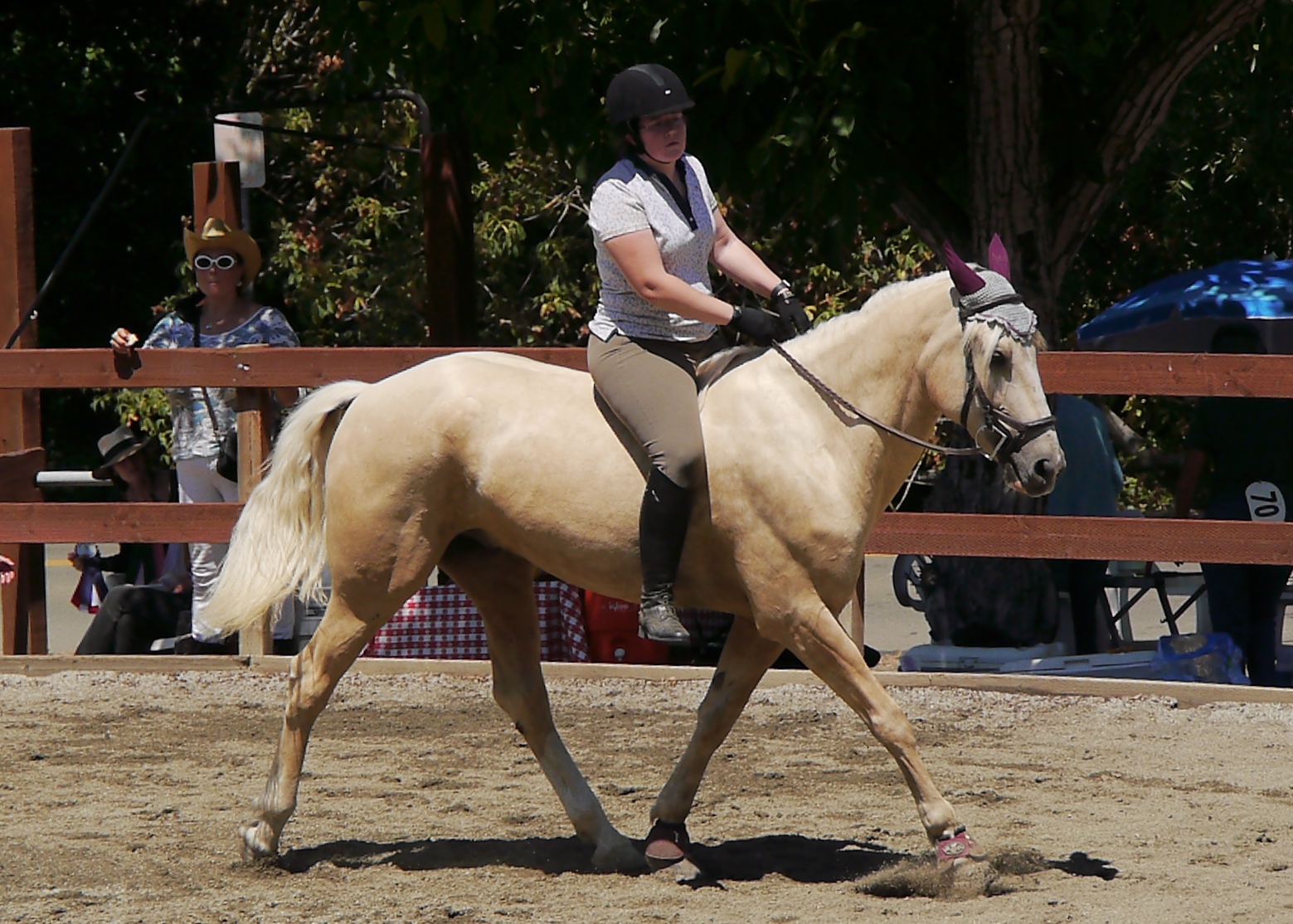 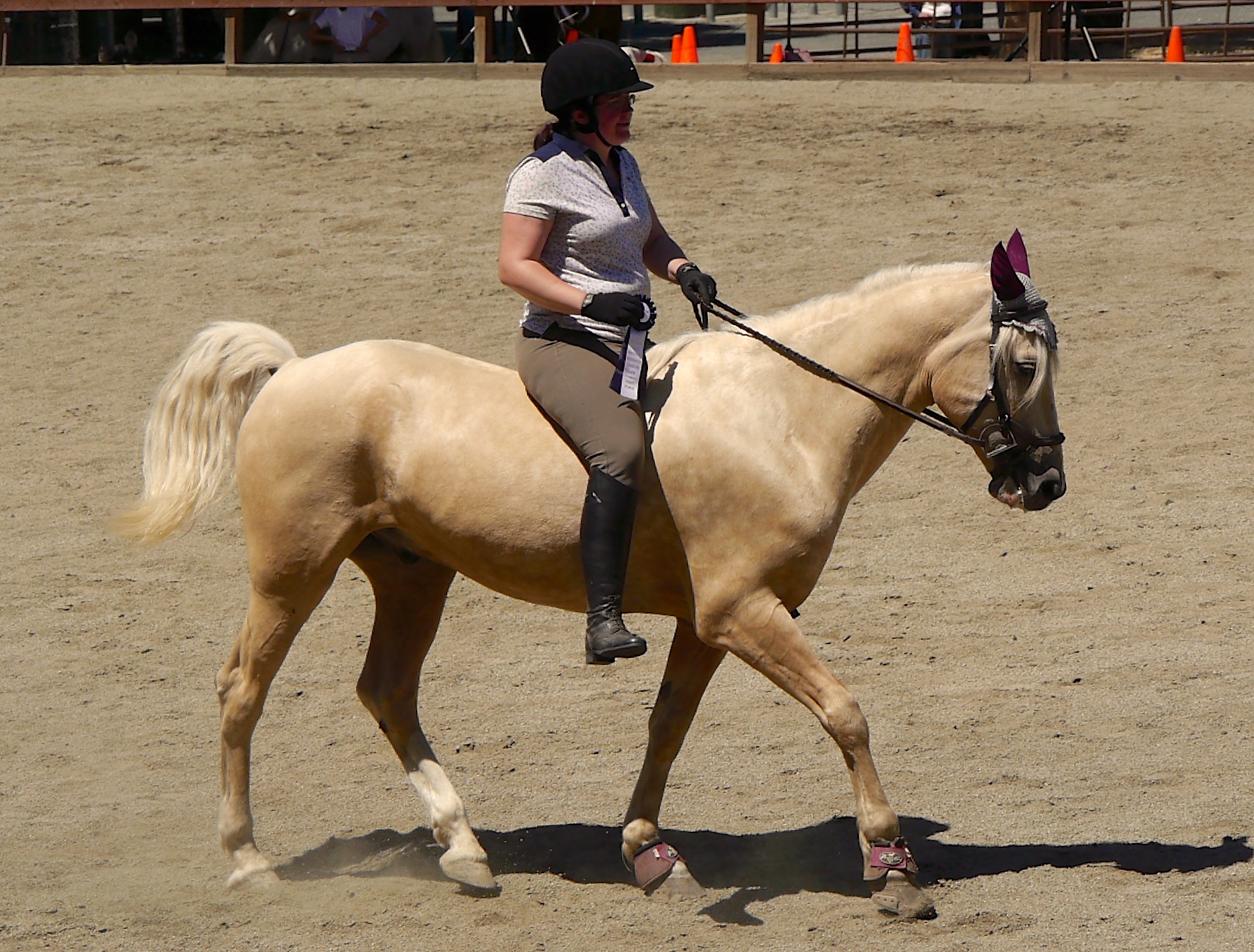 We ended up getting 1st out of 2. Before and after the class, I was talking to the judge about Levi and the prison training program. She was very impressed with his training and interested in how I got him. She was especially interested in how the auction works and the fact that you don’t get to ride the horses before buying them. I told her I picked Levi for his brains. 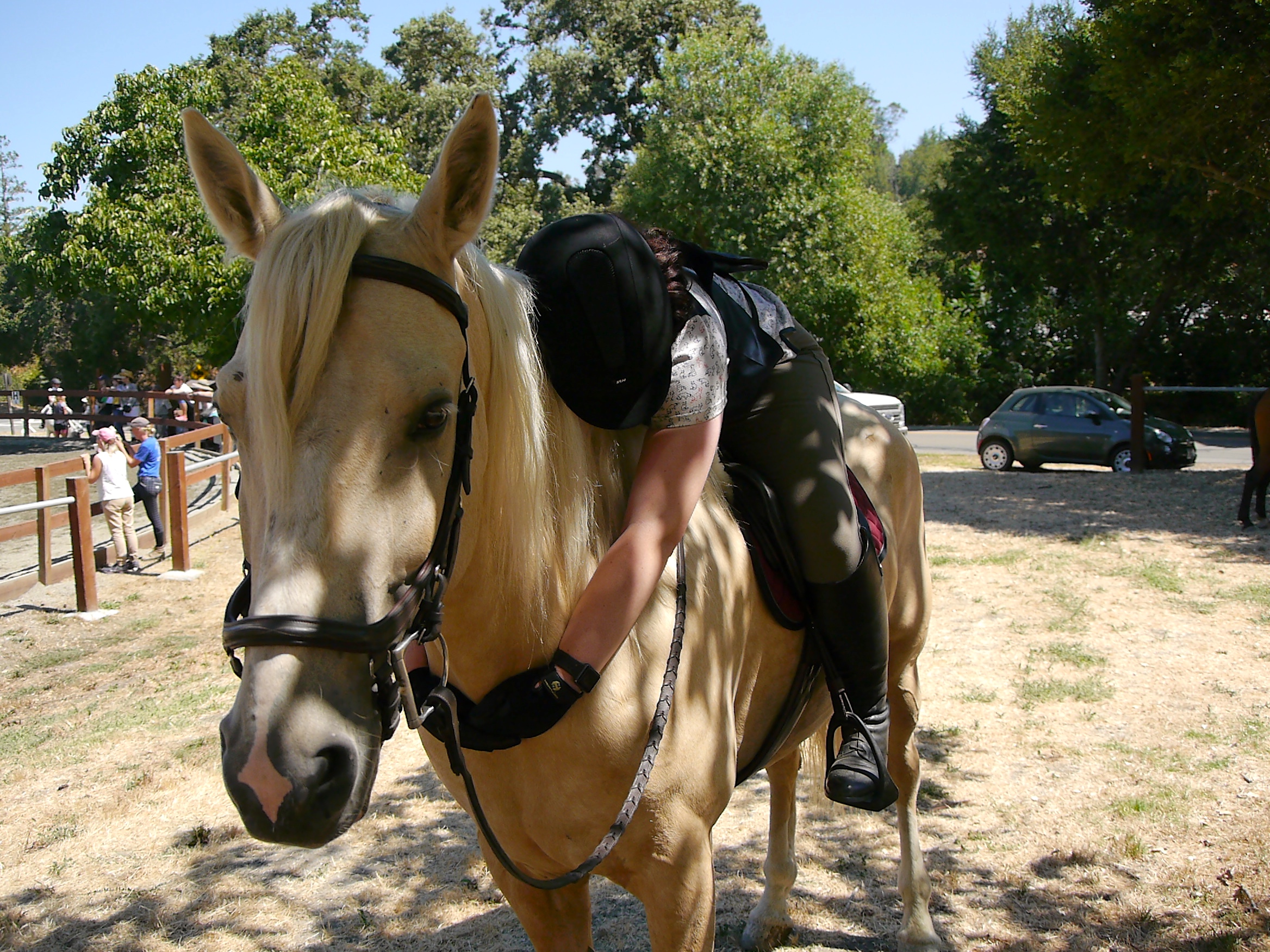 He might be a clumsy and destructive and insistent on putting everything in his mouth, but he’s my goofball and I like him just the way he is.