This was our 4th year attending the Neigh Savers Annual Holiday Party at Golden Gate Fields. We’ve been supporting them since we adopted a horse from them. We no longer have the horse, but we enjoy attending the event and supporting re-homing race horses. The turf club at GGF is pretty cool. Since we donate in addition to buying our tickets and my husband’s work matches the donation, the founder of the charity remember us and is always really excited when we show up. This also means we get perks like a private window table, which makes watching the races even more fun. We were right by the paddocks this year, which certainly helps us with our patented “bet on the prettiest horse” gambling methodology. 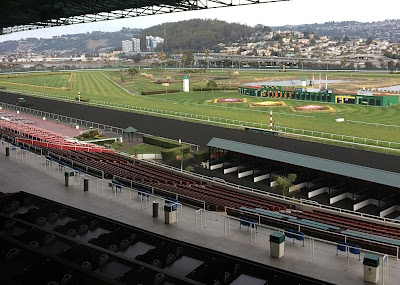 The turf club has a buffet which features fried chicken. There’s a bunch of other stuff (like hand-carved roast beef and other fancy things), but I generally just get a plate full of fried chicken, because I’m classy like that. There’s also a dessert buffet, which allowed me to sample all of the desserts. This plate isn’t even all of them; I had to go back of the other half. To be clear, I did not eat all of this, I just sampled each item. 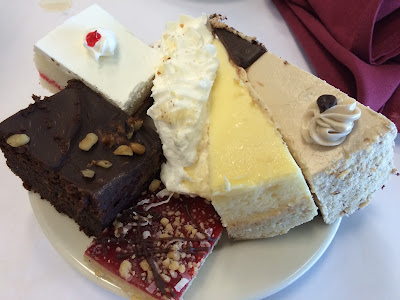 We bid on silent auction items for the charity and entered the raffle as well. We would have won a cool painting at the silent auction, but some jackass went in after they called time and put a bid in over us. I had gone to the table to look for something and left my husband in charge and he doesn’t like confrontation. I would have jumped all over that person. Because I’m socially awkward anyway, I don’t mind getting into arguments with strangers. But my husband is used to people liking him so he’s not quite up for unpleasantness.
In addition to eating, drinking, and bidding on charity things, we also bet on all the races. We have next to zero knowledge of what we’re doing, so we only bet a few dollars, but we have a lot of fun. I actually started talking to the guy at the betting desk and he was helping me and explaining things. The minimum on bets to win, place, and show is $2, but, apparently, the minimum is only 10c on Superfecta bets (which is the first 4 horses in order). You can also do a bunch of weird things with tis bet like box the first and second halves, or pick 5 horses and you win if 4 of them come in. I actually came really close to winning on one bet, I had the first 3 in order and was only off on the 4th. I would have won $80 on a 10c bet if I’d had it right. We actually won a few of our bets, but those were like $6 wins on $2 bets, so we weren’t raking in the cash. I think we ended up spending about $20 on gambling. I don’t do it to try to win anyway, I consider the $20 to be the cost of entertainment for the afternoon.
Every year we go, we say how fun it is and how we should go again sometime outside of the Neigh Savers event. And then we never do. Mostly because it’s an annoying drive for us. But it is a really fun day so I hope we’ll make it out there again this year.
I also really enjoy supporting Neigh Savers. I know a lot of people think horse racing is wrong, but I don’t think it is. Horses can work for a living; I just think the trainers should be responsible for the horses after they can’t race anymore. Neigh Savers works with some decent trainers to re-home horses after their racing careers end. They also rescue horses that haven’t been properly cared for.
Kate of Peace and Carrots is running a giveaway for volunteering or donating your time in December. I think it’s great of her to reward people for giving back. I certainly don’t donate for the chance to win blog contests, but I do like to win things so bonus! Check out her giveaway and maybe enter yourself.