November is the beginning of winter here in Vermont and things slowed down for us on the Equestrian front, but we still did a few things.

First up was another day of foxhunting. With it no longer being Halloween, I had to dress (at least somewhat) like a foxhunter. Our hunt is a bit casual, but they do wear jackets. When we were moving, I sold a lot of my excess equestrian apparel. I had both a Kerrits and a AA black jacket and couldn’t imagine why I’d need two black jackets since I mostly show in the primavera AA jacket anyway. I kept the black AA in case I ever went to a hunter show, but sold the Kerrits. Well, I’m going back to being a hoarder because was the wrong decision. Turns out its freaking cold in Vermont and I wasn’t going foxhunting in an AA jacket in 20° temps.

In typical me fashion, I also made no plans to rectify my lack of jacket until like one day before we were going. I scoured the consignment racks looking for something that fit and was cheap. I found $15 green wool jacket that looked like it’d be warm even if its not an officially approved color for foxhunting. Well, people who wait until the night before can’t be choosers. The jacket had been oddly altered though. The sleeves had been taken in by about 3 inches, but the height hadn’t been adjusted. I’m not sure how many tall people have super short arms, but this is all I could think about while altering it back.

Anyway, this blog isn’t called DIY Horse Ownership for no reason, so I undid the alterations. 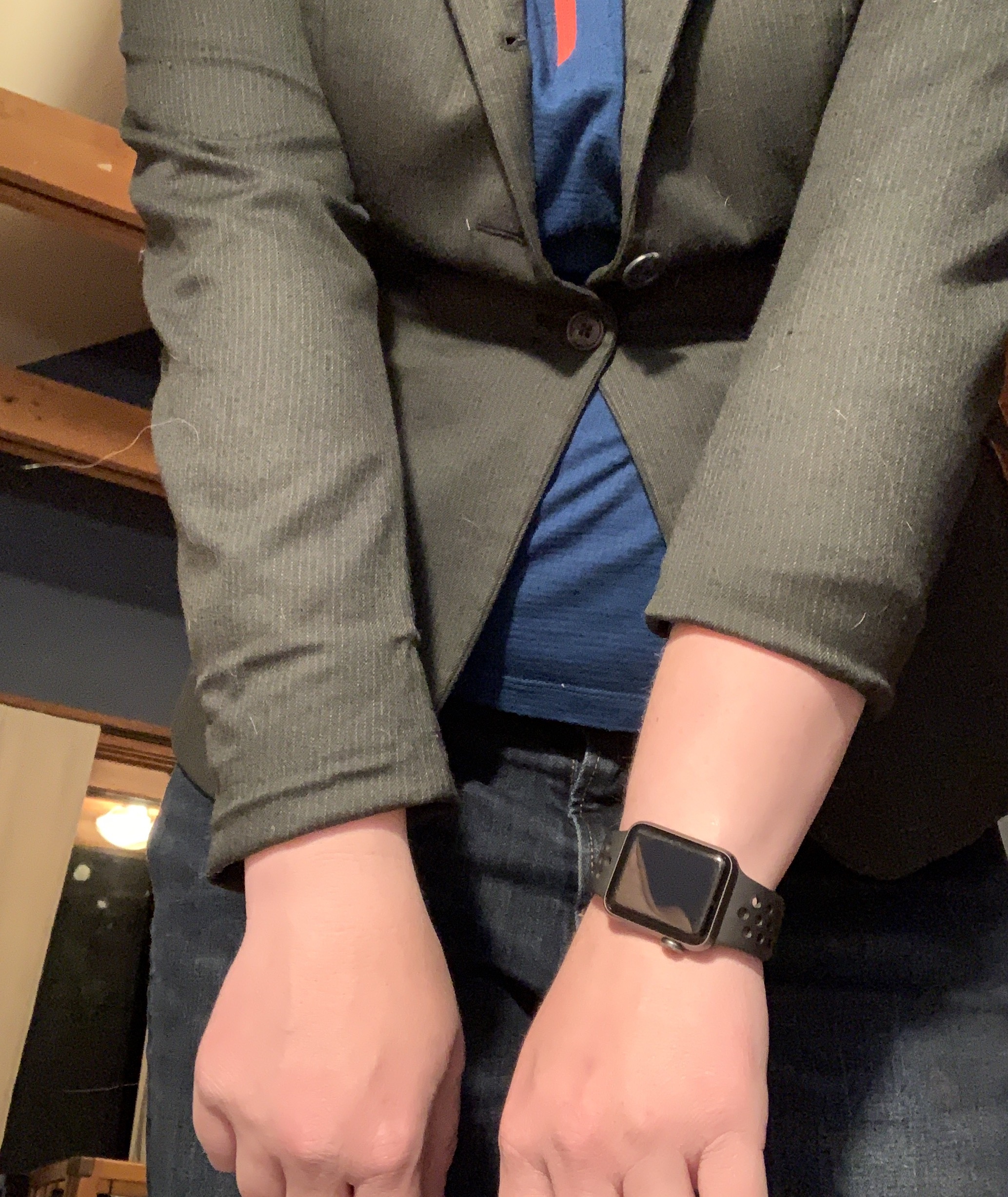 One sleeve done, the other still painfully short

It wouldn’t be me though if I didn’t ultimately fall victim to laziness.

Not only have I still not put those buttons back on, but I may or may not but definitely have lost them.

ANYWAY, the jacket was complete enough to take it fox hunting the next day. 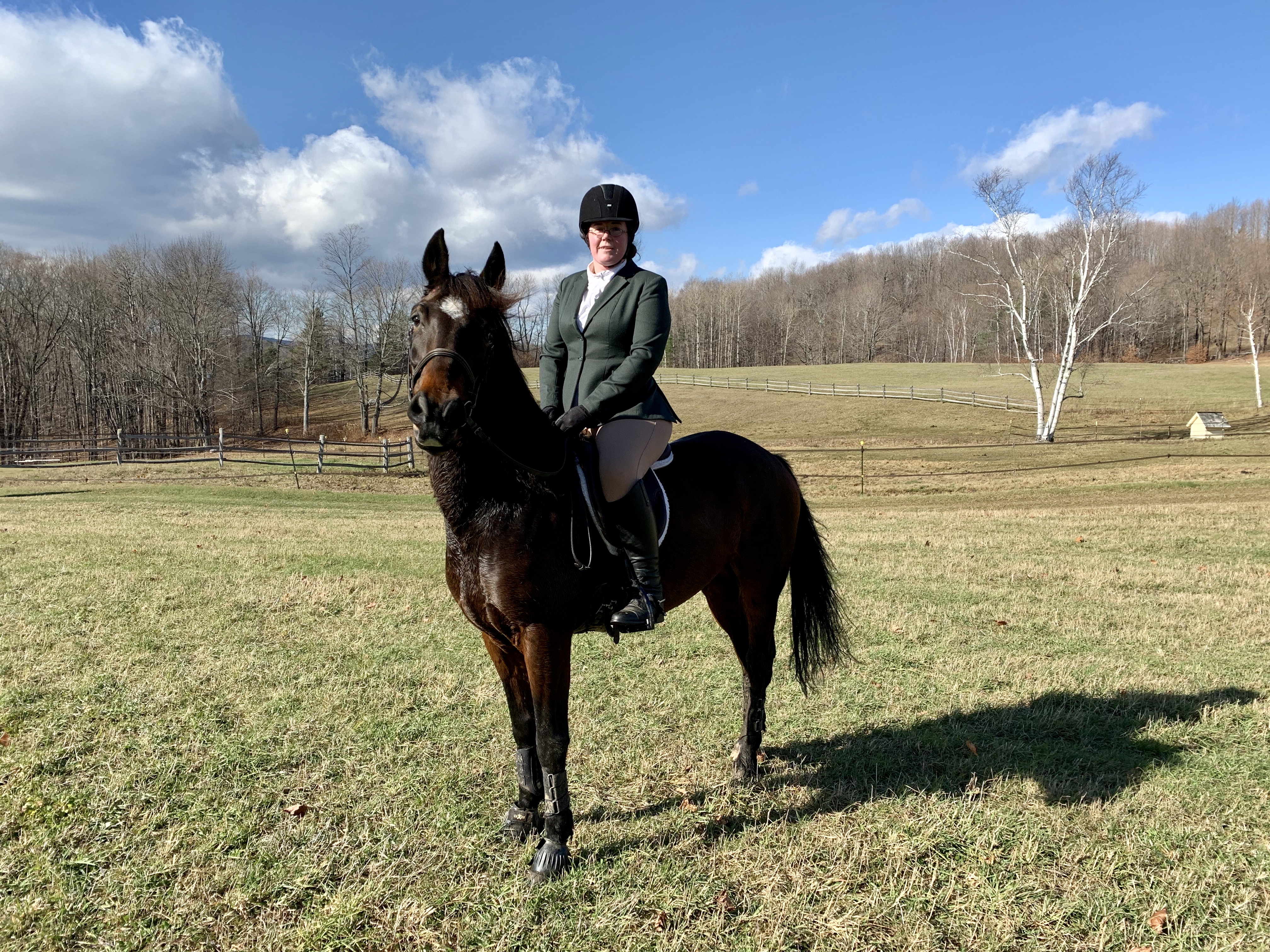 For some added excitement, we arrived at the hunt to find that Levi’s saddle wasn’t in the trailer. My husband had been in charge of loading tack up while I was getting stuff in the house and I was really pissed at him for forgetting the saddle. I’ve had that saddle longer than I’ve know him. That saddle is old enough to vote. We had to scramble and borrow a dressage saddle from one person’s trailer and a spare girth from another. But we made it so my husband could ride. 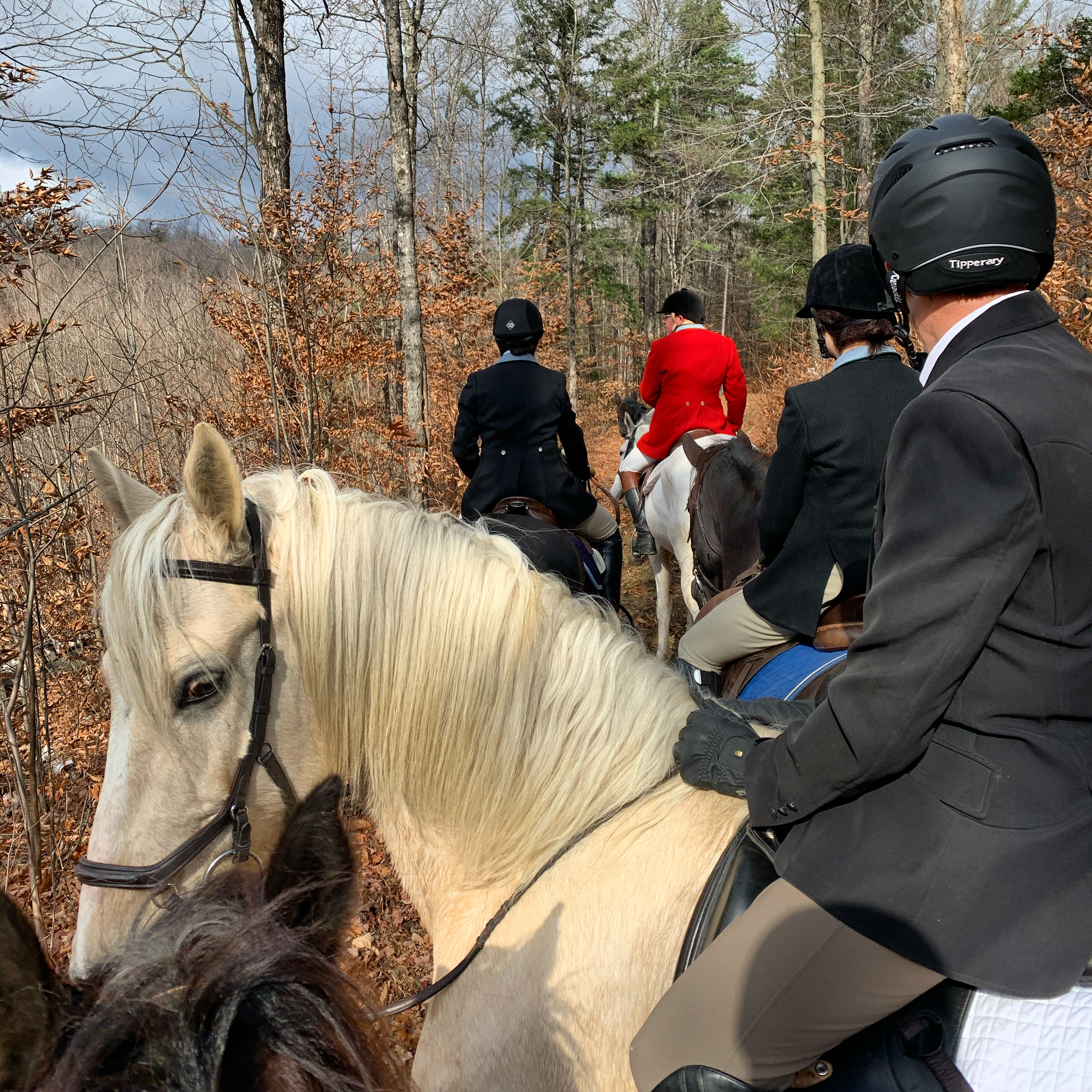 Who doesn’t want to go foxhunting in a too-small dressage saddle?

This was a rather odd day with the hounds all taking off after a bear (which isn’t allowed) and us spending the rest of the ride trying to find them and get them back. The bear was fine, but it took a while to gather up the hounds. It was a good thing I had a warm coat because it was freaking cold – and snowing – when we started out. The master even made an announcement to make ourselves comfortable over following attire rules. With that endorsement, I managed to stuff my heated vest into that jacket and was nice and warm. Next year, I’ll get a real hunting jacket.

Unfortunately, when we got home, we couldn’t find my saddle. We were thinking we’d find it sitting in the tack room or on the fence near the trailer, but nope; it was no where to be found. We even checked the security camera footage and could see my husband walking it out to the trailer. Well, sh*t. That meant it must have fallen out on the side of the road somewhere. We sent an email to the hunt and the secretary asked the list serve for the area we’d hunted in. By the next morning, someone emailed to say they’d seen a saddle sitting on a fence at GMHA by the side of the road – someone else must have found it and put it there – and we were able to drive down and find it there. Sometimes people are good.

Our next adventure was going to the Horse Expo in Massachusetts. There were a few clinics we wanted to see, but we were mostly interested in shopping. We wanted to check out footing and hay options in particular. My favorite part was the Equi-Trek trailers. We’d actually looked at them back in California, but they hadn’t started importing the LQ trailers at that point. These things are so cool. 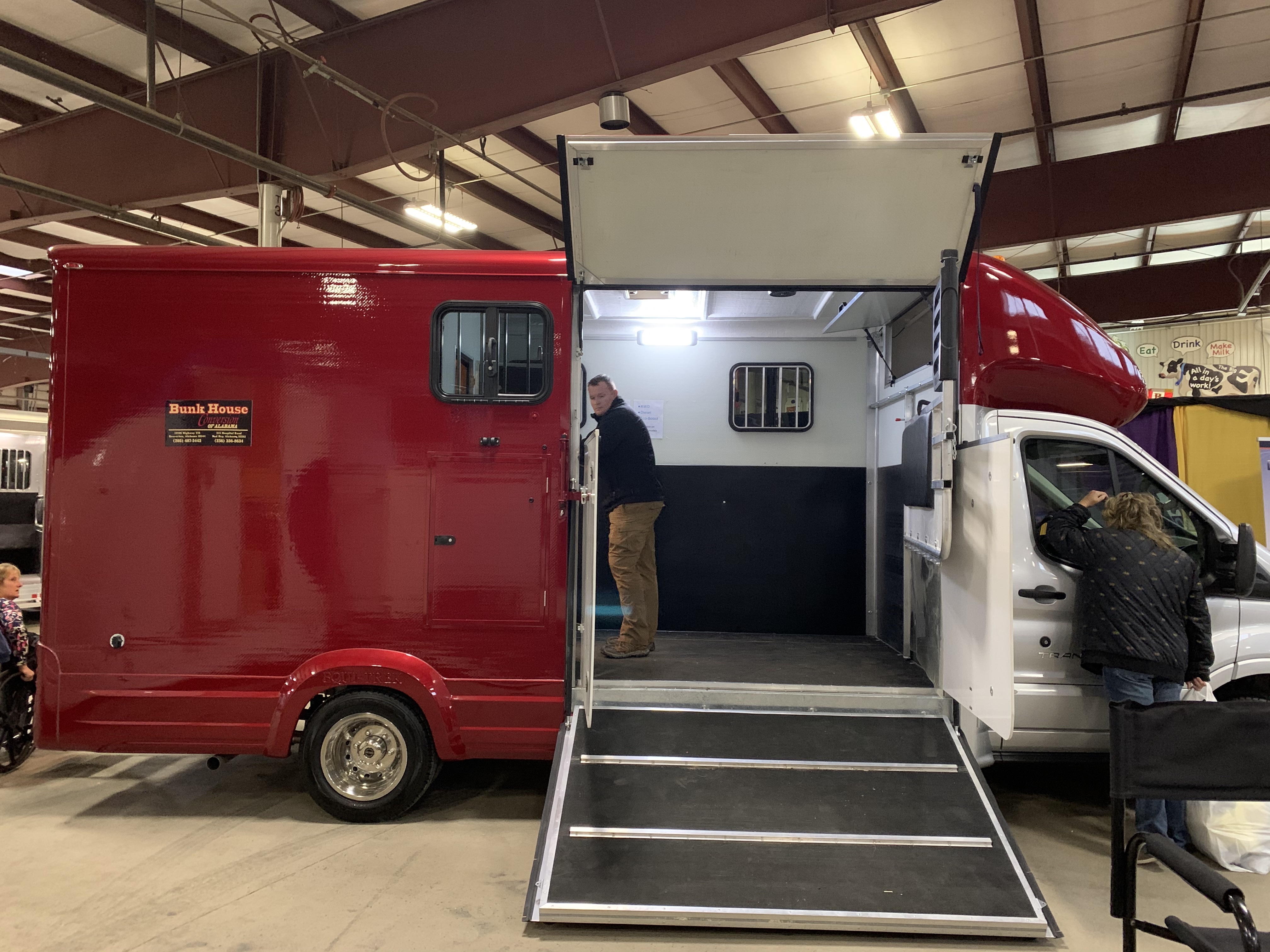 2 horse Truck and Trailer combo with LQ in the back.

I didn’t get a great picture of it, but I really liked the bumper Pill trailer they had there. It was a small, two horse trailer with a full LQ (bed that folds into a table, kitchen, bathroom), and tack storage all weighing less than 4,000Lbs. Sadly, we’re not in the position to buy a trailer right now, but it’s fun to think about options for the future.

That night was unfortunately the first snow storm of the year for us. I don’t like the snow, but the boys were having fun:

Fortunately, the snow melted off pretty quickly, but then the weather went back and forth from snowing to raining, to freezing, and the rest of the month got really difficult to ride. Foxhunting got cancelled a few times and we weren’t able to make some of the meets for other reasons (like Thanksgiving), but we did make it out for one last hunt. The ground was partly covered in snow and I seriously debated taking my not very sure-footed horse who hadn’t been ridden all month to a hunt, but I made it happen. 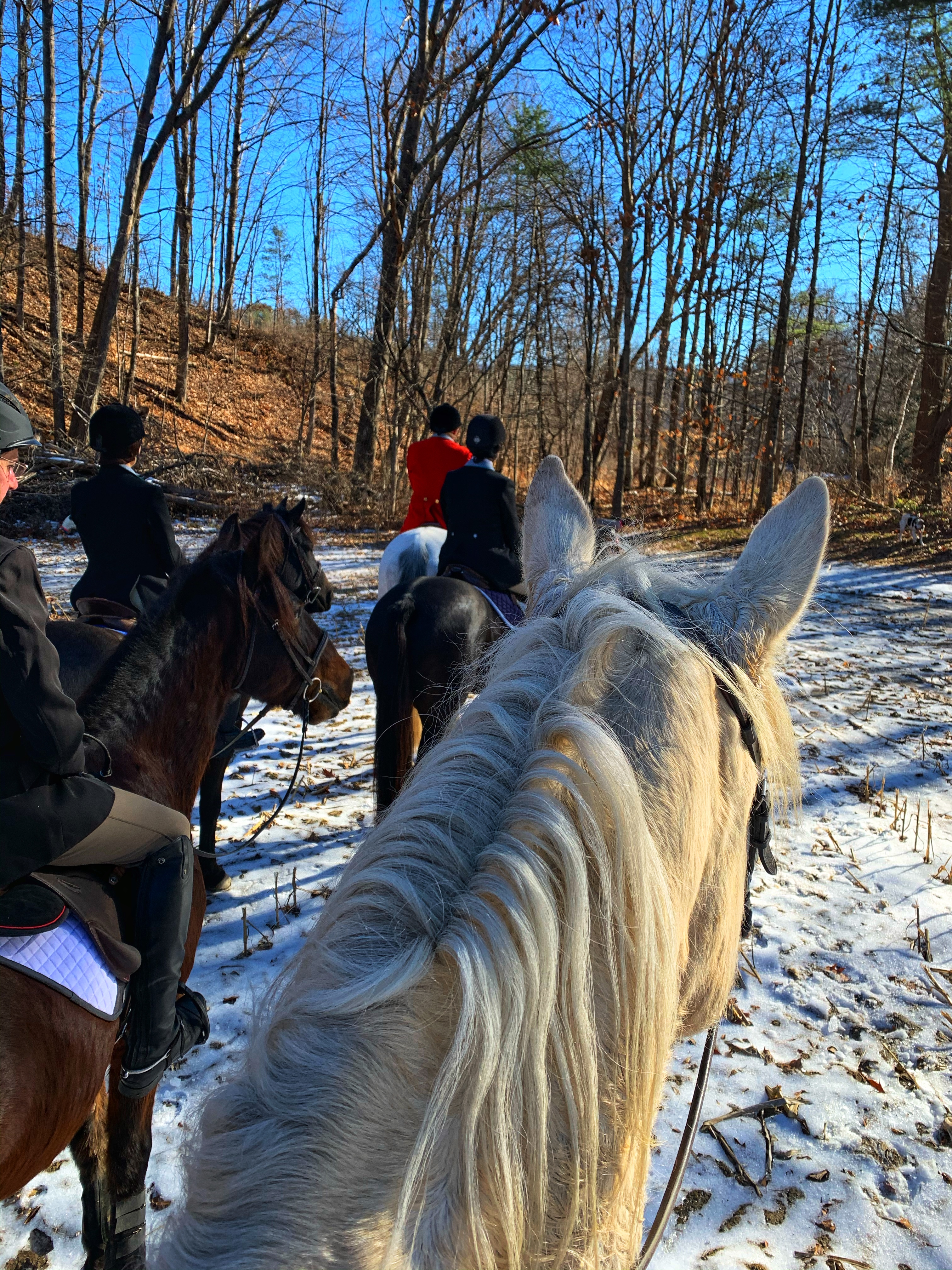 Seriously questioning my sanity about now

It was nice to finally go to a fox hunt on my own horse… even if he was a rather snorty, dolphining idiot. We even jumped a small log in the snow. And no one died. 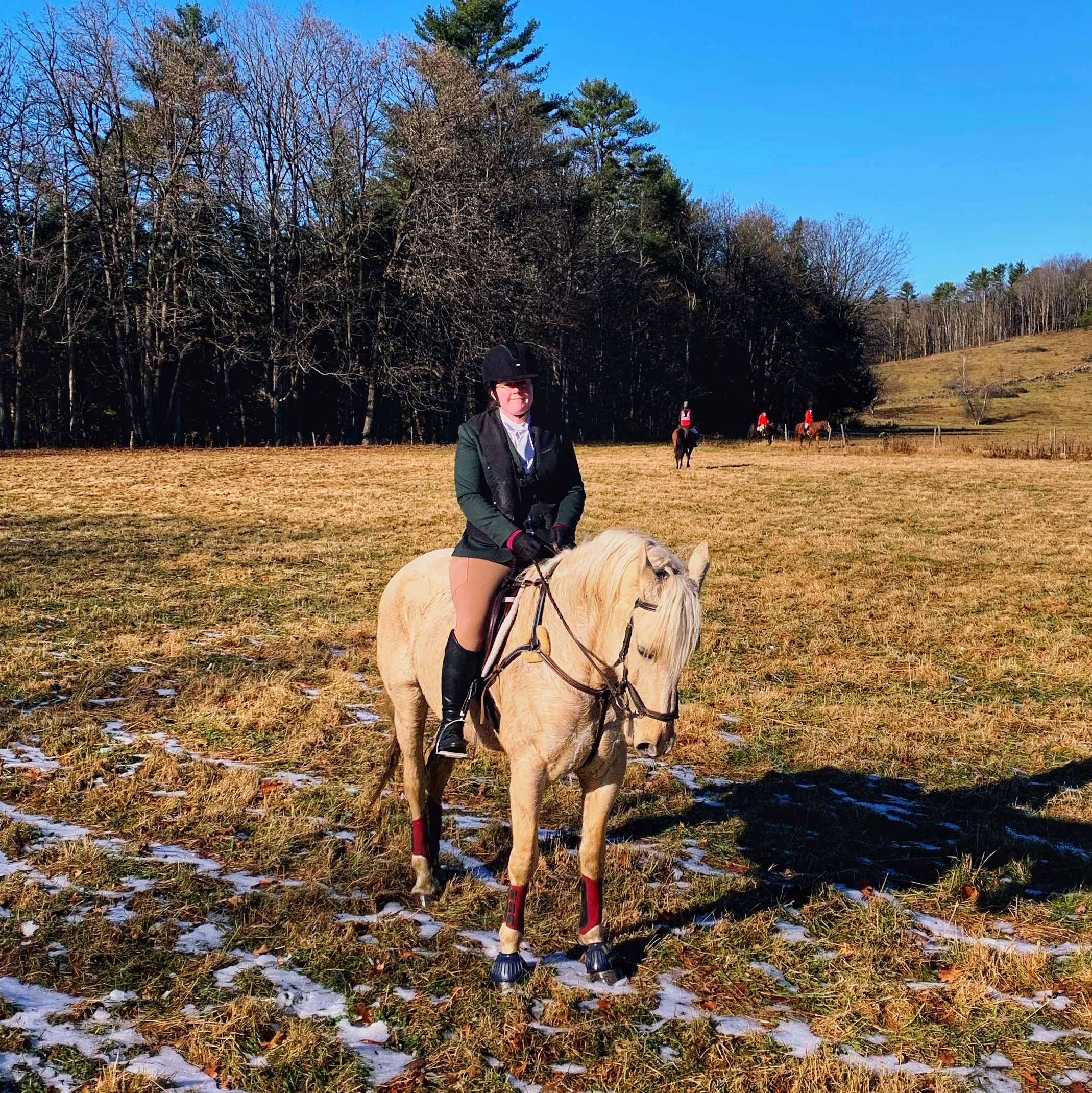 The jacket worked out again and I wasn’t too cold even if I wasn’t allowed to wear my heated vest underneath it this time. It’s still not black though so I’ll need to get a different one for next year. I was thinking about putting some buttons on the jacket and reconsigning it, but then I wouldn’t be learning my hoarding lesson from the beginning of this post.

At the end of the month, the boys got new sheets from Horseware. They’d had the SmartPak sheets for the previous 2 years and this year they stopped being waterproof. True to their 10 year warranty, Smartpak offered to replace them, but I’d never really liked them. They didn’t make Eugene’s color anymore, so I got a refund on that one. I had to accept another one for Levi, but after not having a 2nd sheet for Levi and having to put a medium on him one day when it was too warm for a medium, but with a cold rain falling, I wanted to have a back up sheet for him anyway. I won a Medium Weight Horseware Turnout from Strafford Saddlery a year ago and I LOVE it. I really like the way it snaps in the front – so much more convenient than buckles – and I like the 3 straps across the belly and the tail strap (which I buy and put on all my blankets because I hate leg straps). So I decided to get two more Horseware sheets for the boys. I literally picked them by flipping through the catalog looking for sheets in the correct color and only then looked at the features. Is this not how everyone shops for horse blankets? Color first? Look, I like my color-coded equestrian life. 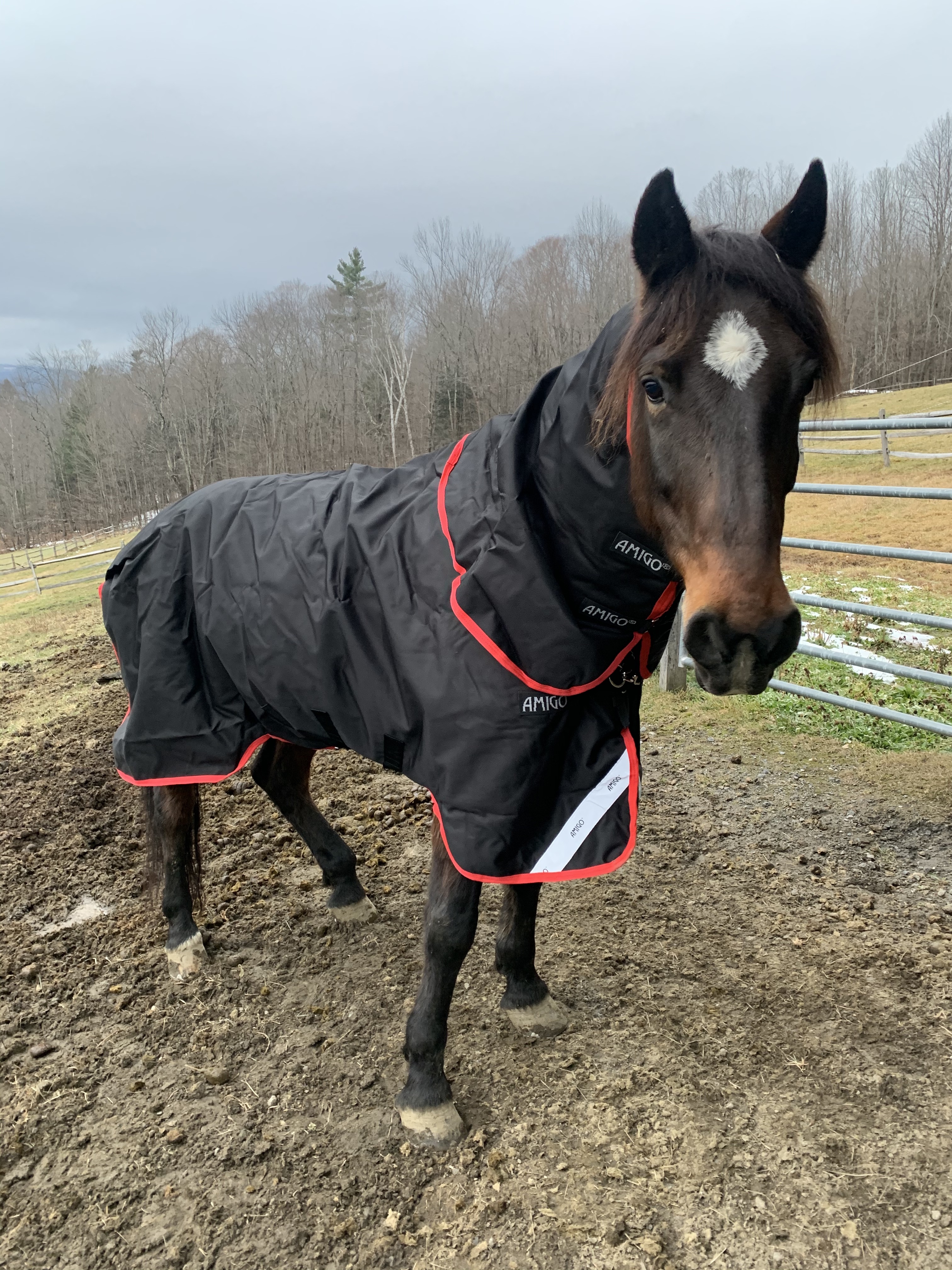 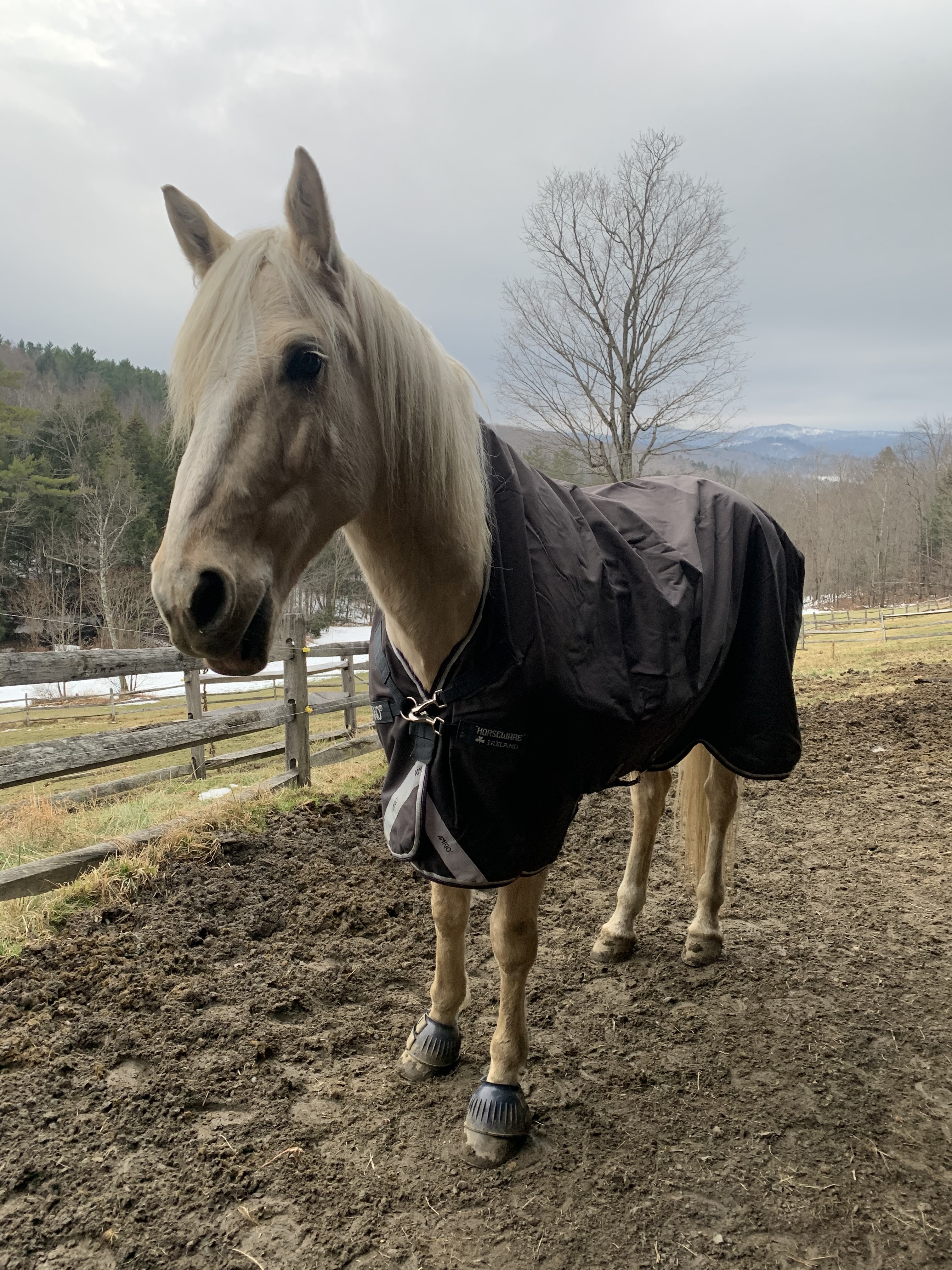 And that wraps up November!