Our next event in October was the closing event for Area 1 at Hitching Post. I’d only been doing schooling events all year, so I actually had to renew my member ship for this one and only event. Dressage at Hitching Post is set up with the warm up ring in a field above the dressage rings, which are down in an isolated little pocket surrounded by trees. Horses have to go through a long tree lined lane to get down to the rings and I’ve seen many balk at doing so and I even had to lead one down once when taking pictures. Because my husband and I were in the same division and our times were separated by only one person, we chose to go down together. From past experience, I knew they’d both be too worked up at being separated to do well in their test. 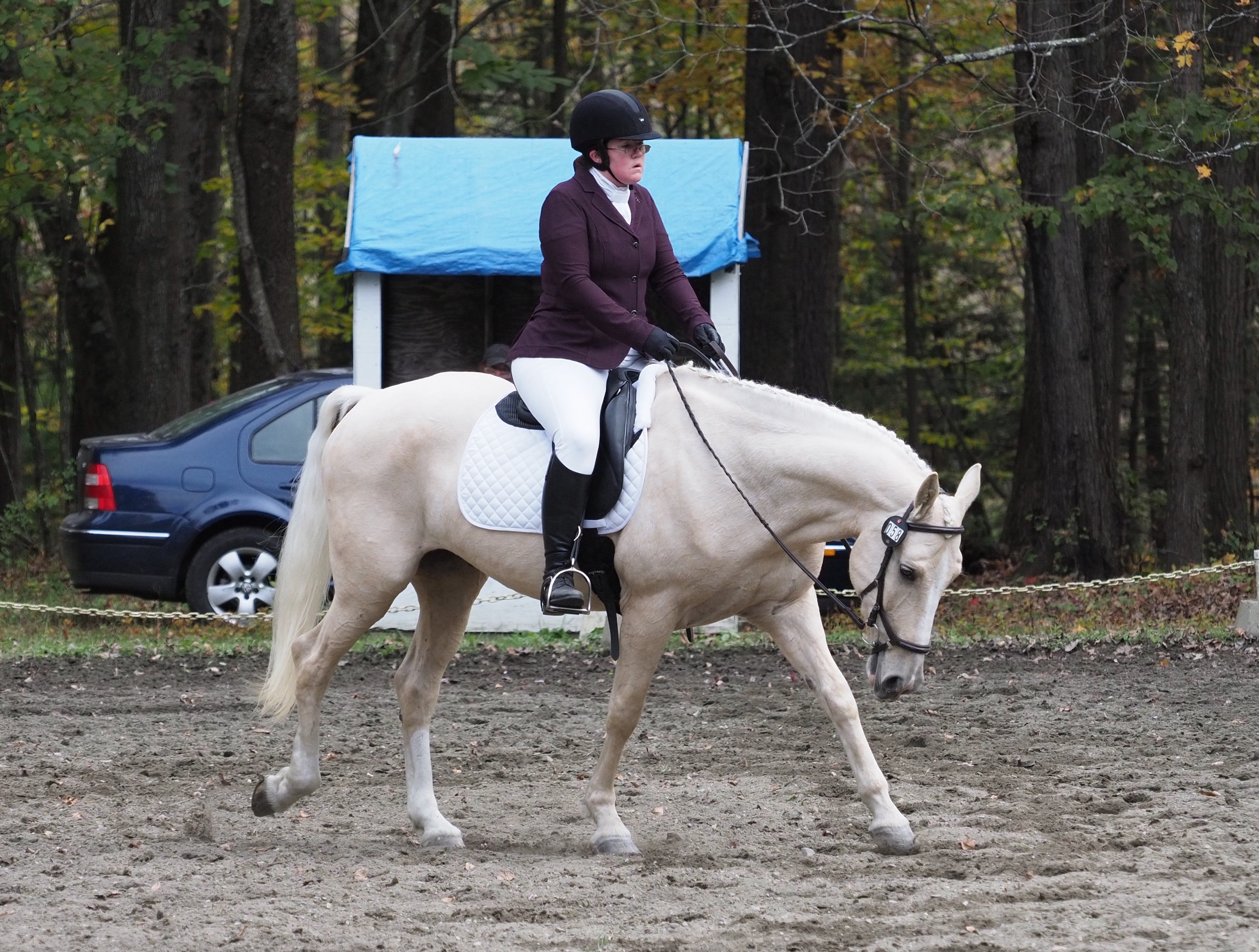 This worked well for me since I was first. I thought the test went pretty well. Levi was mostly well behaved and everything felt ok. Not great, but not like I wanted to murder him afterwards as I often had. Sadly, the judge didn’t really agree and we ended up with a 36.7 for 9th out of 11. 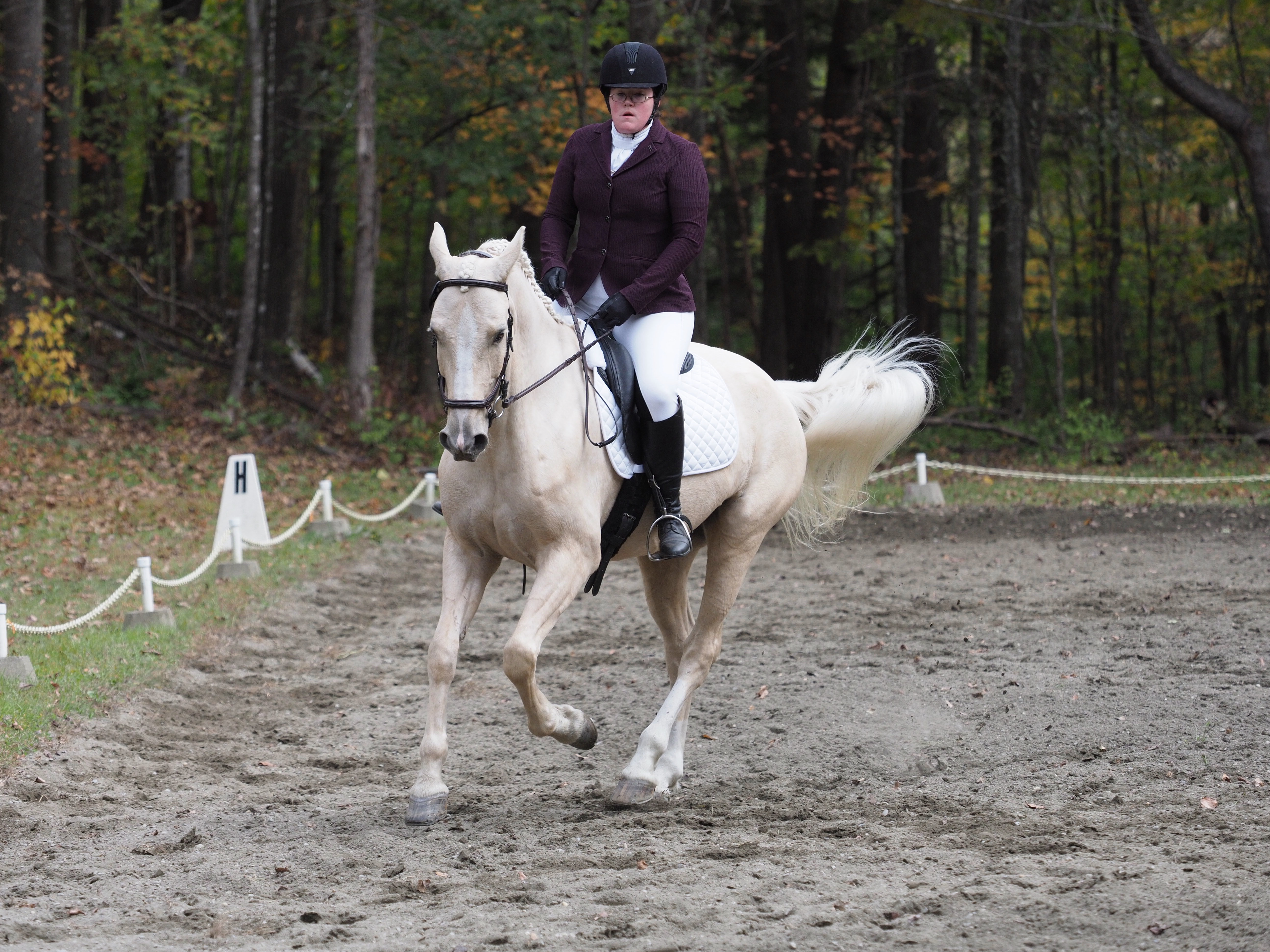 My husband found that all the down time taking pictures of my test and then waiting for the person between us to go was too much for Eugene and he was no longer in a working state of mind. There was quite a bit of giraffing. I didn’t think the test was that bad, but it certainly wasn’t as good as many Eugene has put in recently. The judge didn’t like it much though and they ended up in last place with a 38.1. 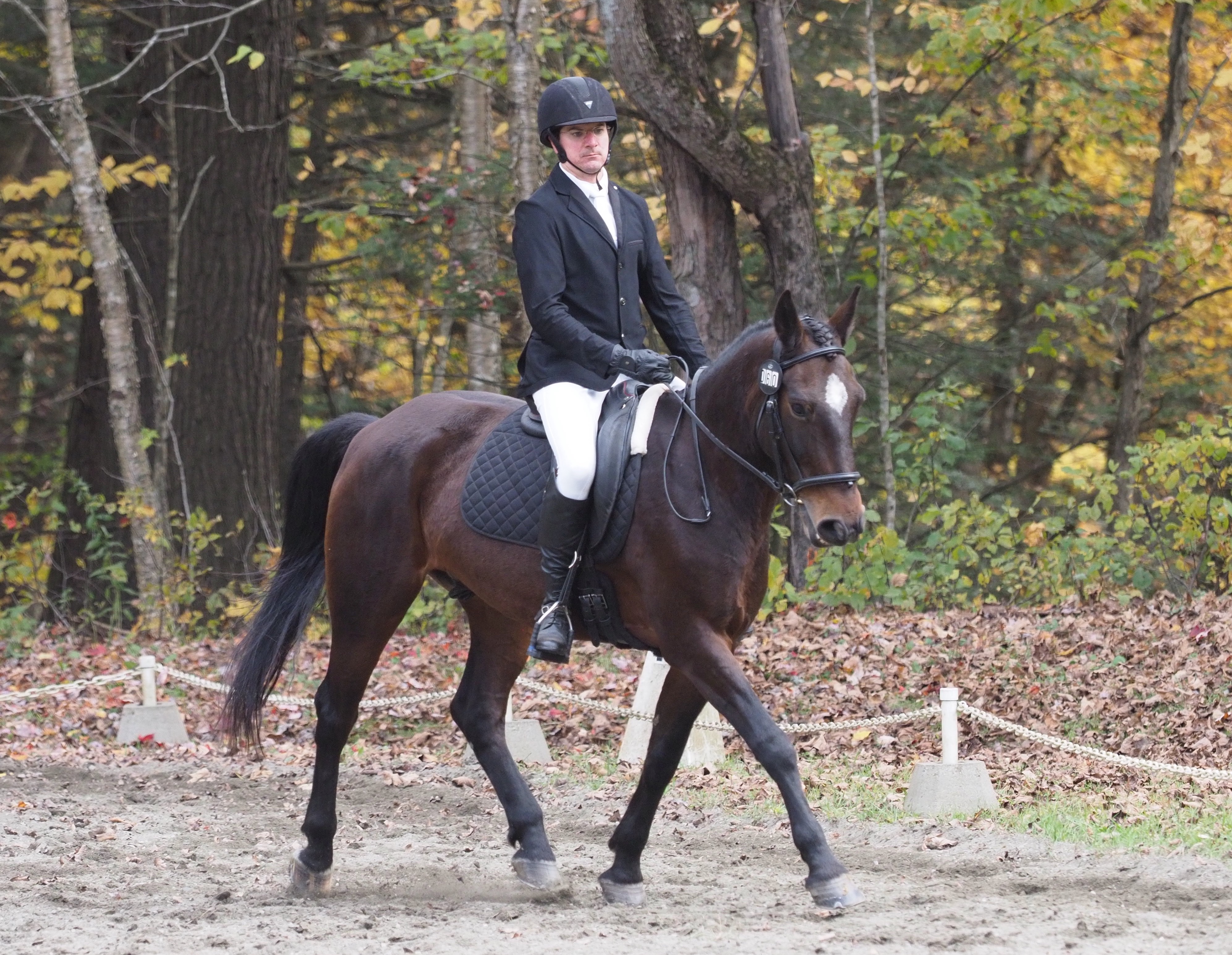 We had quite a bit of down time between dressage and XC, which was nice as we had time to walk the XC course and didn’t need to go the night before or get to the event really early. The Hitching Post XC jumps are a mix with many being rather soft in height. It was one of the things that made me willing to venture back into the rated event world. However, while some of the jumps are smaller, the courses are not easy. Terrain plays a huge part of these courses. Since I am terrified of going faster than a walk down hills, this makes the courses here challenge for me.

However, I really just wanted to get around a rated event without any XC jumping faults and without having a panic attack. I was feeling okay about it going into XC: not excited for sure, but not like I was going to throw up. It’s certainly progress.

The helmet cam video has a funny little intro scene. Sometime in 2018, Levi decided that peeing was his new coping mechanism for stress. This is especially true of separation anxiety, but he will do it any time he’s worked up. He once peed 8 times on a group trail ride. To start XC at HP, the horses have to leave the warm up area, go down a hill into a bowl, and across the bowl to the start box. They really get separated from all the other horses. As we started across the field, Levi decided that’d be a good time for a pee. The start box woman was laughing with me and you can kind of even hear in the video the announcer saying something about how we’ll be on course shortly. My husband caught the moment on his phone. 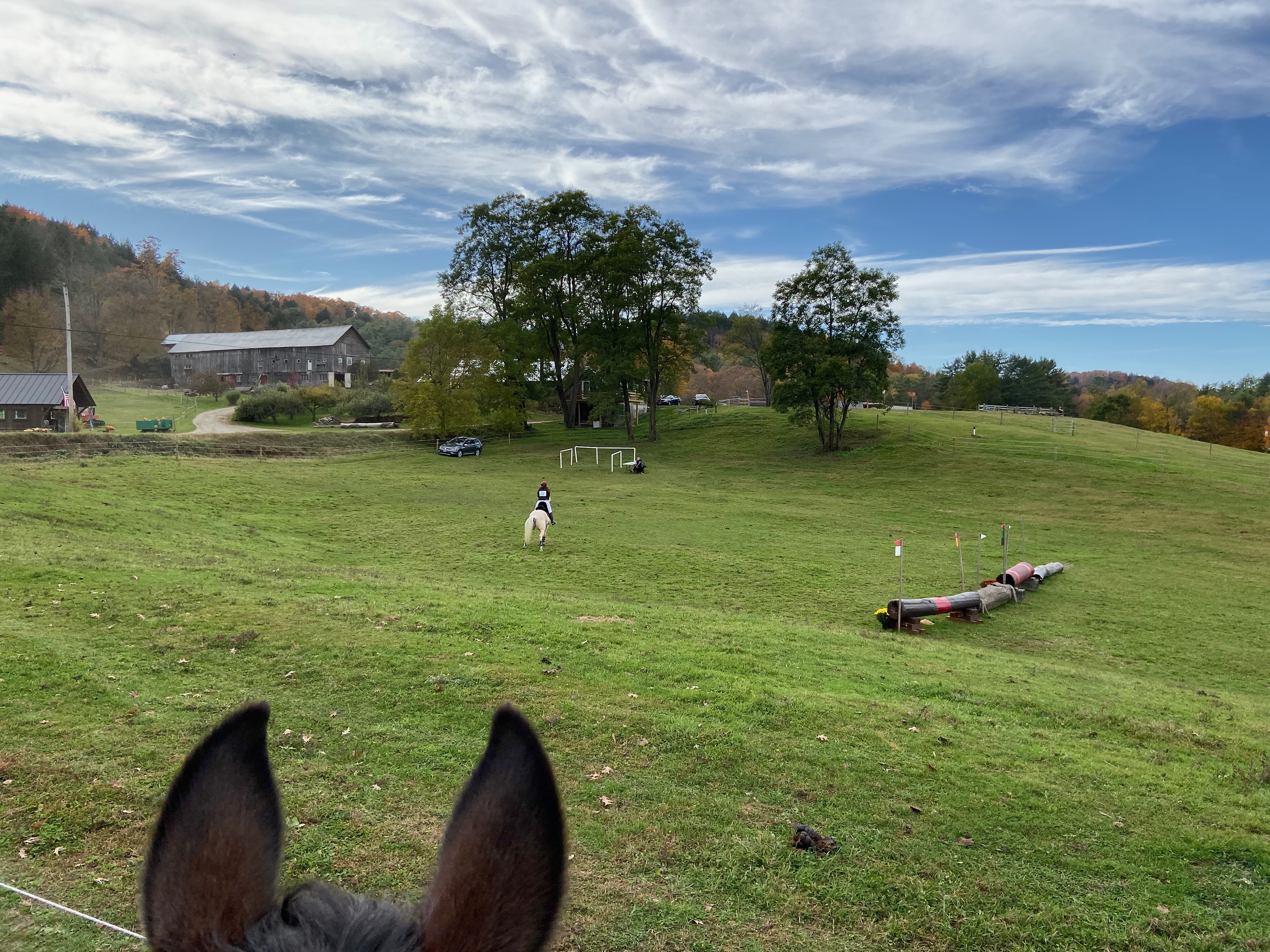 As you’ll see in the video, I walked down all the hills. To be fair to me, the camera distorts the elevation and the hills don’t seem that steep in the video. However, they’re not unridable. Certainly everyone else just rode down the hills like normal.

I did kick it up a bit in the final field when I realized how behind the time I was, but it was too little too, too late, and I ended up with 4 time faults. But, whatever. I was happy to finish it. We went straight from XC to stadium. By the time I was just about to go in, my husband showed up from his XC course and he was able to take videos with his phone.

I’s not the prettiest round, but the important thing is that I felt fine about it. I did not feel like we were going to crash and die at any point and that’s important. We were also double clear and that brought us up to finish in 6th place. Although I was happy enough to just finish XC and was fine with the 4 time penalty points for the sake of my sanity, it turns out I would have been in 6th with or without those points. 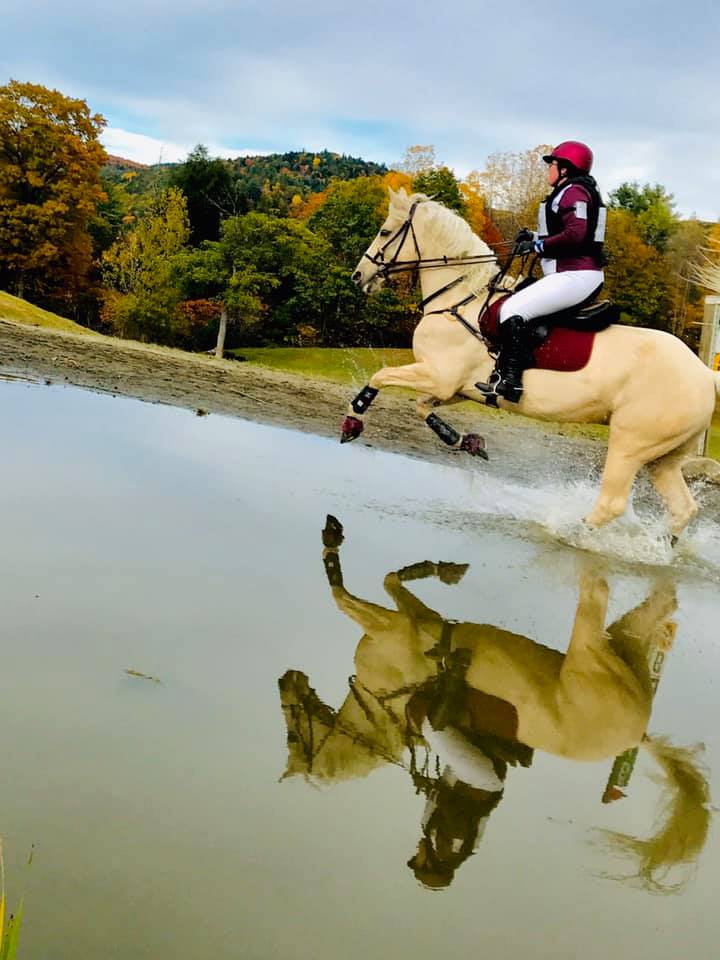 My husband had a double clear cross country round with absolutely no video evidence of that because he didn’t turn his helmet cam on. Did I ask him to turn it on before I went on my own course? Yes. Did he tell me he’d do it later? Yes. Was there any reason to not just do it right then and there? Nope. 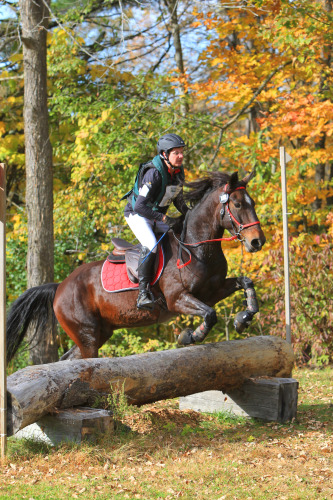 Anyway, they were double clear on XC and it was time for Stadium. Eugene had a pretty decent round for Eugene with only 1 rail down. He’s at a tricky stage where Novice is hard for him, but BN is apparently boring and doesn’t inspire any real effort. He’s pretty casual over the jumps and that  causes issues in stadium. Their round was good enough to move them up to 7th. All in all, it was a good day and a great way to finish out the season.

The next weekend, we were up early to go to a totally new-to-me equestrian event: an eat-a-thon. One of the local equestrian groups puts this ride on as a fundraiser and it sounded awesome. It was basically a trail ride with pit stops for food along the way. Umm, yeah, that sounds like me. The ride started with breakfast and it was so awfully cold I was worried about the ride. I actually ate really quickly and then went back to my truck to wait for the start time. But it warmed up as the sun rose and ended up being an absolutely gorgeous day.

Being run by an endurance group, I was a little worried that people might be treating it like a conditioning ride and racing past us (which blows Levi’s mind), but everyone was just out for a fun day. Some people were walking it, and they even had a hay ride option. We started out riding through this huge abandoned apple orchard, then down across a creek and up to the first stop. I think they had a chili option at this first stop. For the horses, they had piles of carrots and apples and then the water trough was filled with apples so the horses could go bobbing for apples.

Eugene absolutely loved bobbing for apples at the eat-a-thon. He even got pretty good at it by the end of the day. Check my story for more pictures from the ride. #blmmustang #bobbingforapples #horselife #trailride #fallinvermont #thisisvermont

Levi never really got the hand of the whole bobbing for apples thing, but then he’s a weird horse and doesn’t really like apples. Eugene loved it though! The next section of the ride had some really pretty views. 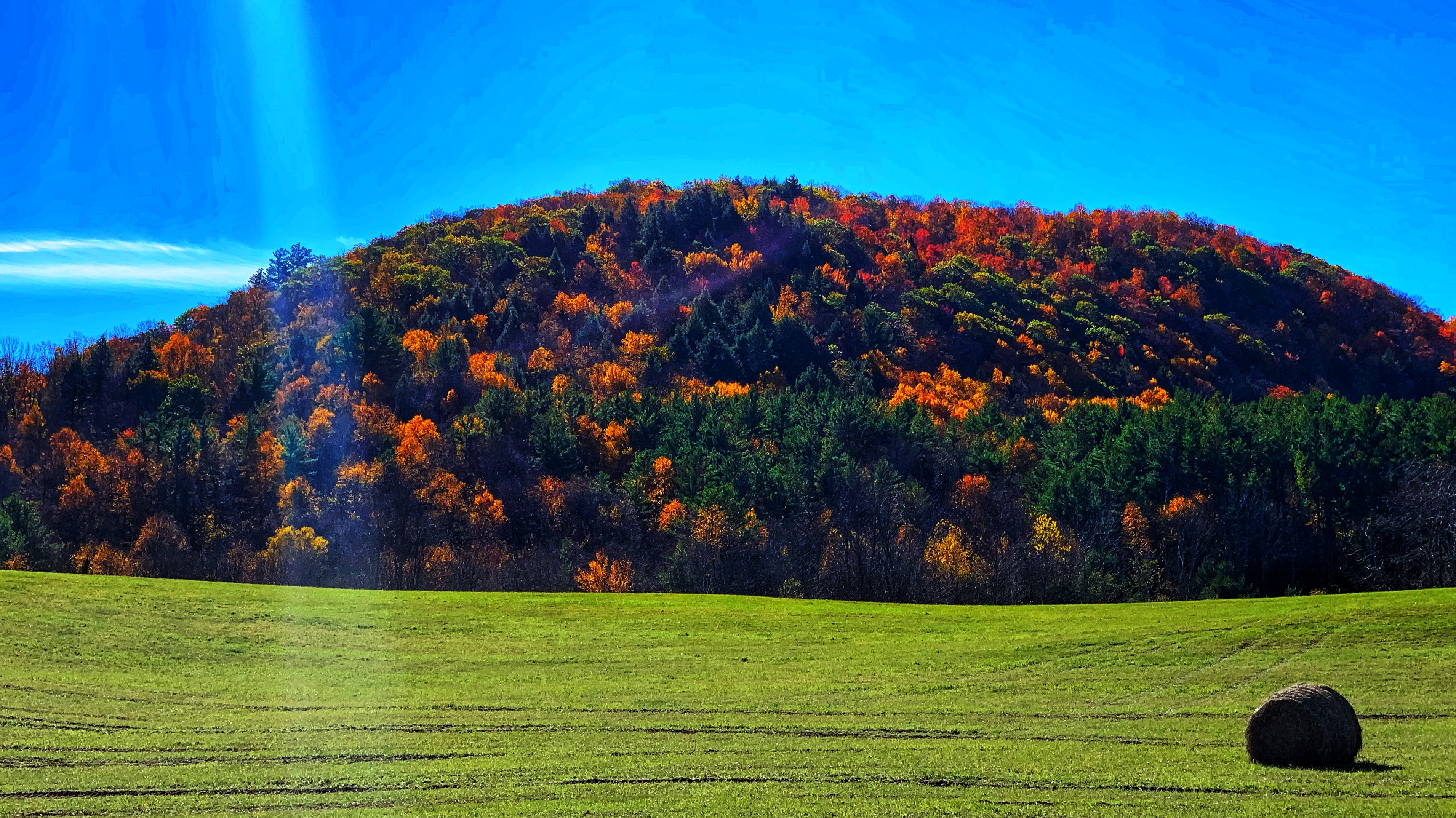 The second stop had some sort of food that I forget because it was meat based and I couldn’t have it, but they had spiked cider as well. More importantly, to the ponies’ delight, we discovered that the pit stops had alfalfa. The horses haven’t had real alfalfa since California and they were in heaven. 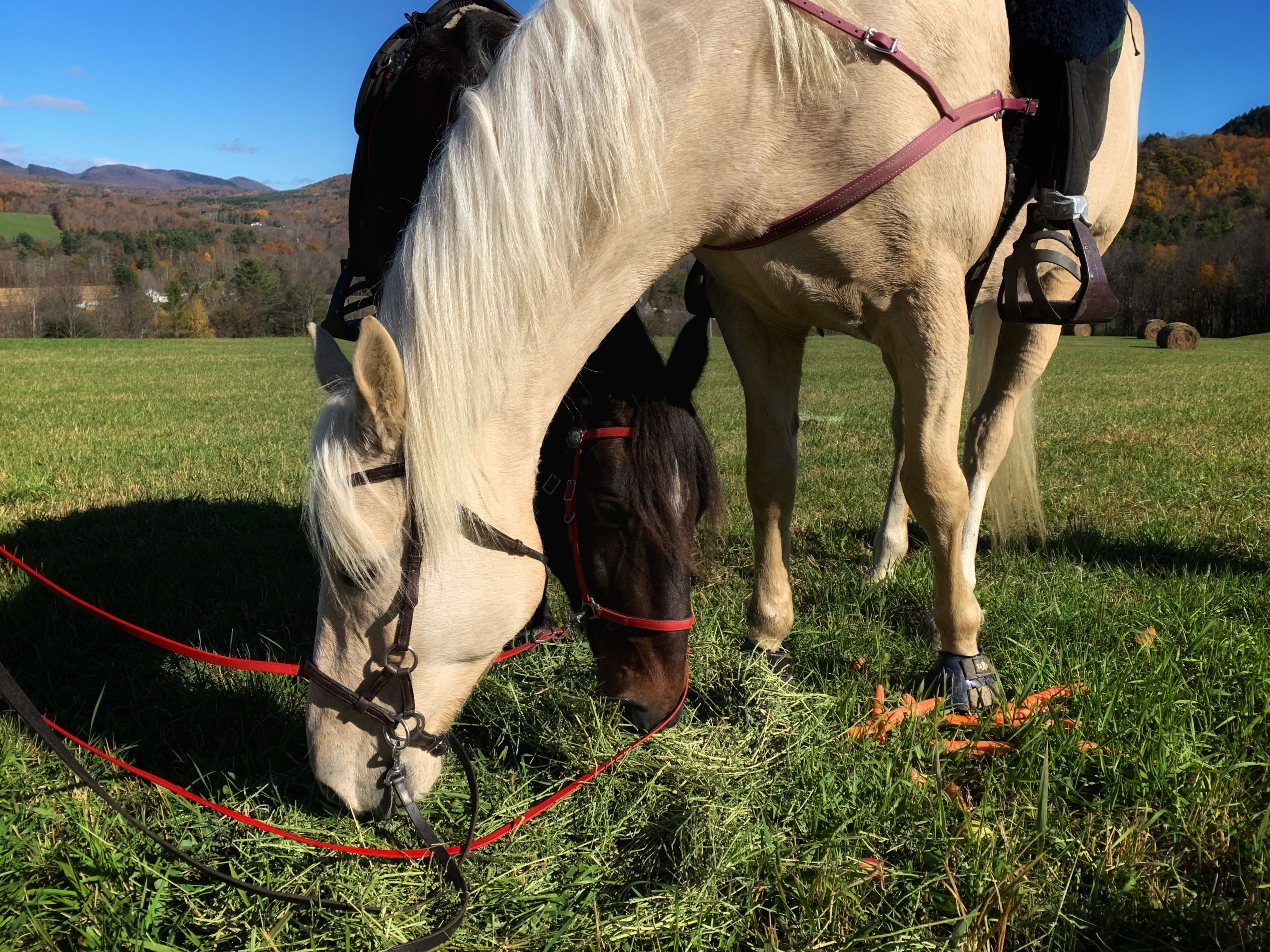 After this stop, the ride went along a dirt road and we passed an alpaca farm. The alpacas were super interested in all the horses going by. Luckily the boys were intrigued, but not bothered: 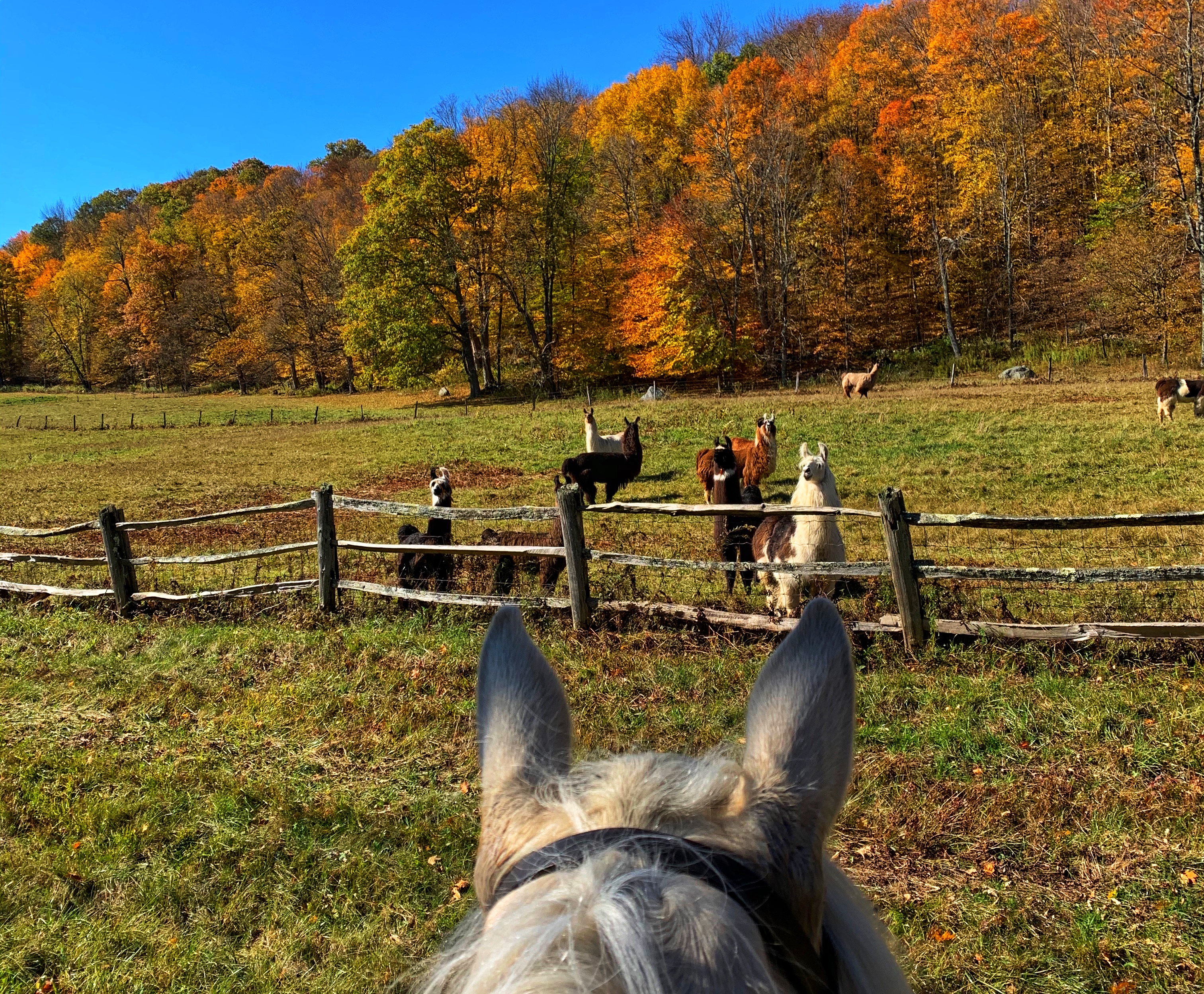 After the Alpacas, we rode on trails through the forest. It was peak foliage and the trails were like paths of gold with all the fallen leaves. It was gorgeous. Photos really don’t capture how pretty this day was. 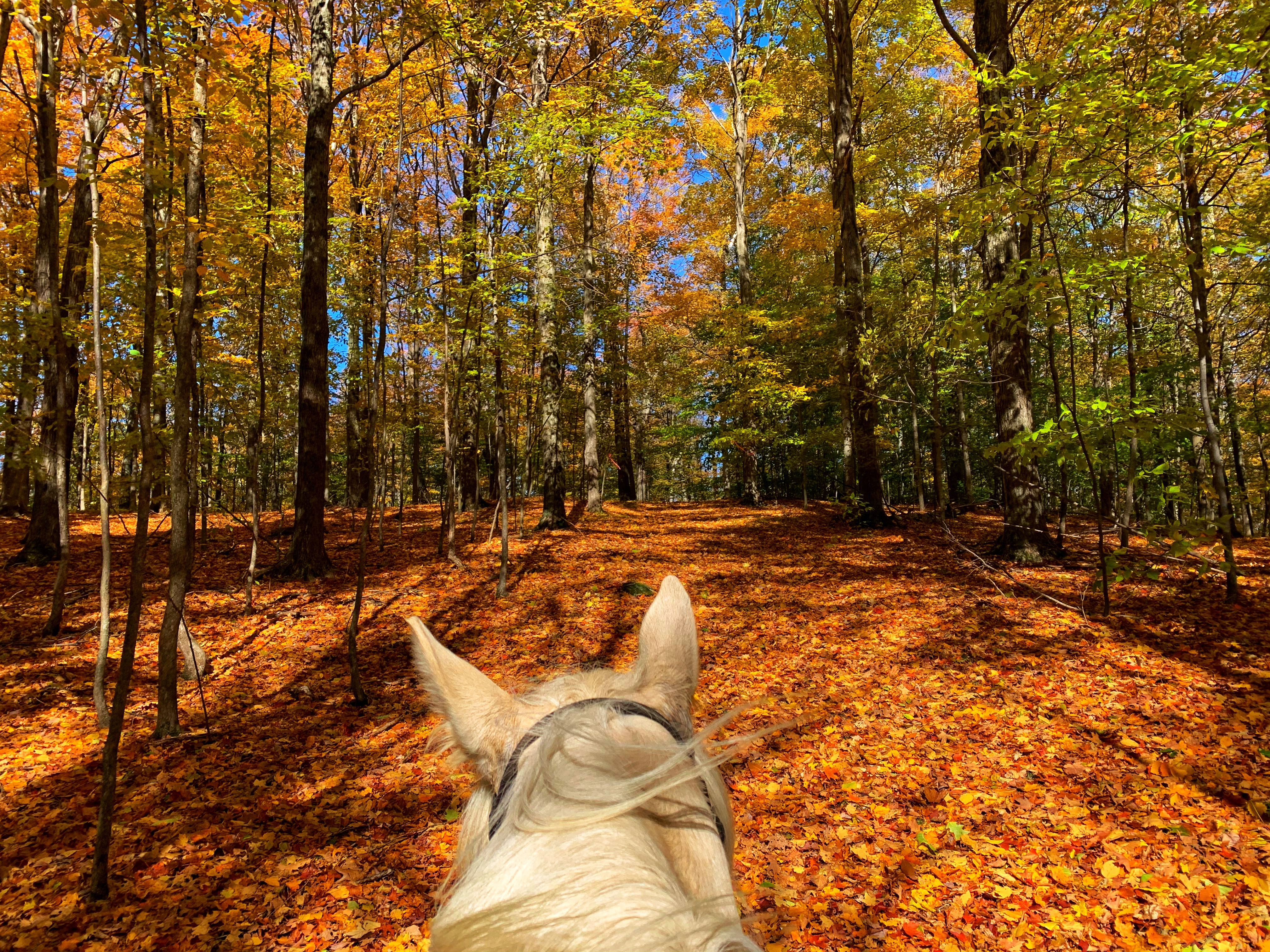 The third and final food stop was the best. It was this unique property deep in the woods. When we first road up I thought maybe it was a camp as there were little buildings all around, but it’s actually where the owners host concerts. There wasn’t any music that day, but this stop had tons of food and lots of drinks. I had soup and some raspberry bar and sparkling pear cider. Definitely my favorite stop. The boys got to eat more alfalfa as well. After that, we had a ride through the forest and then back through the abandoned apple orchard before returning to the parking area. The leftover food and drinks had been brought back for a lunch, but we were pretty stuffed and had chores to do at home so we hit the road. This was a super cool event though and I hope they have it again next year.

My husband had been out capping with our local fox hunt on Eugene, but I was hesitant to go because Levi has been a complete nutcase in the past for group jumping situations. My husband agreed to ride Levi and I decided to come along and ride Eugene. The first hunt I went to was Halloween themed so we dressed as a fox and hound. 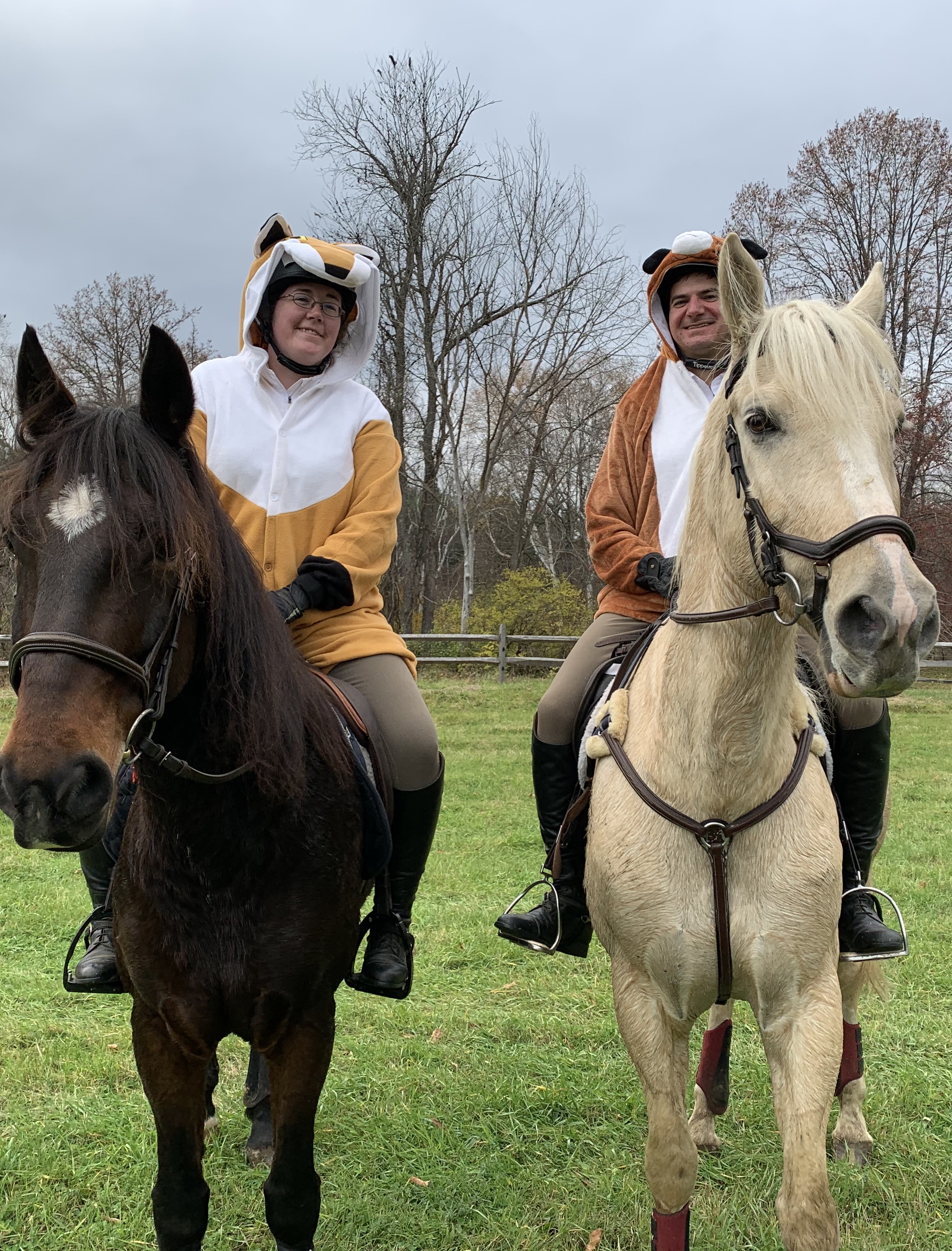 It was actually ridiculously hot and we ended up stripping layers of costume during the ride. Which is kind of hard to do when you’re wearing a onesie, but we made it happen. 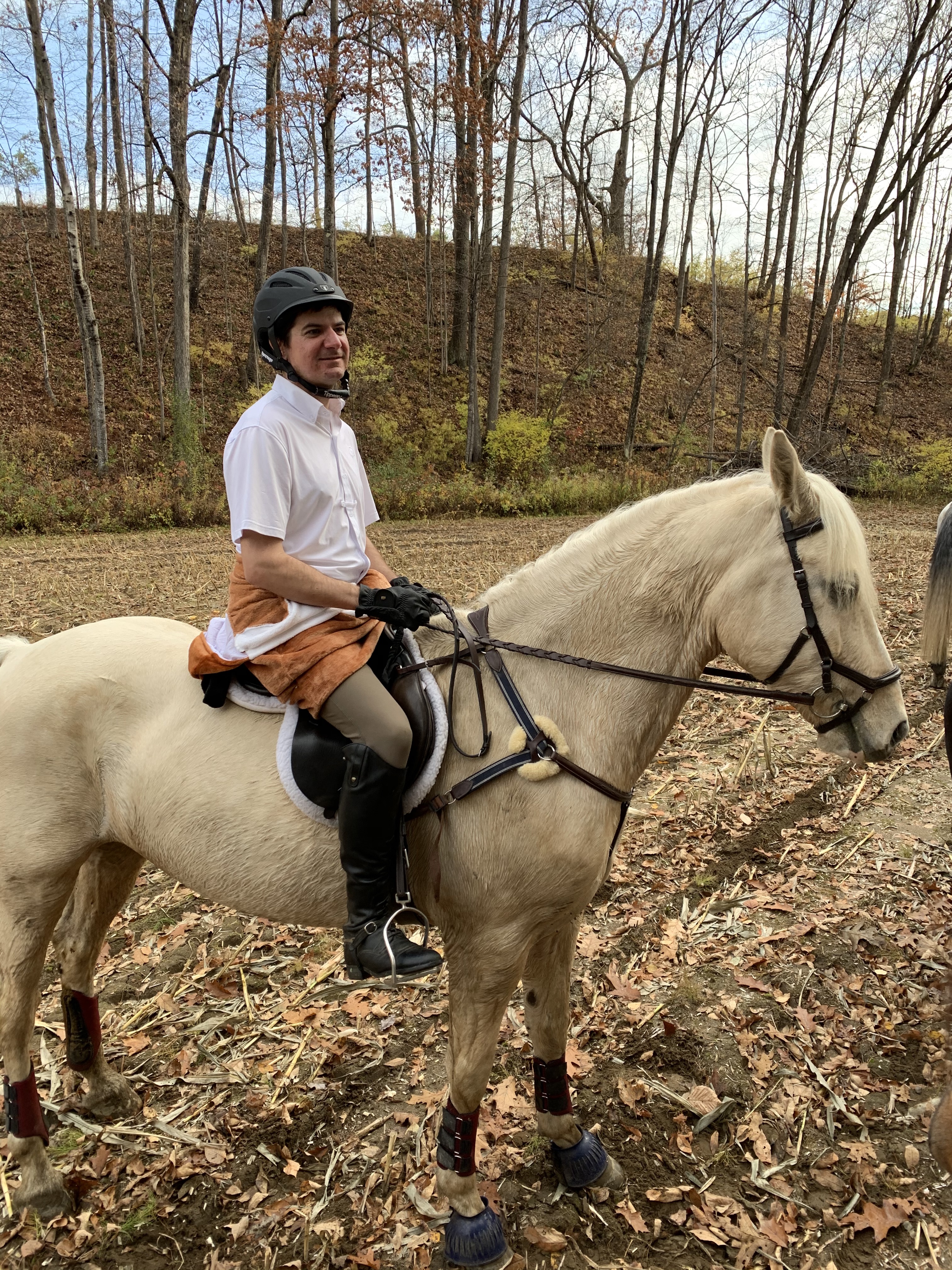 Eugene was his usual excellent self. He’s really a good fox hunting candidate: sure-footed as a goat, doesn’t mind crowds, couldn’t care less about hounds, etc. He certainly gets excited when the group is moving out and he really wants to be in the front, but he’s controllable. Levi was mostly good and we were hopeful he’d continue to be an acceptable hunt horse. Foxhunting is something I’ve wanted to do for a long time and Levi has been holding us back from doing it. So getting him out there and having it go well was a great way to end the month. It was also a really fun day.