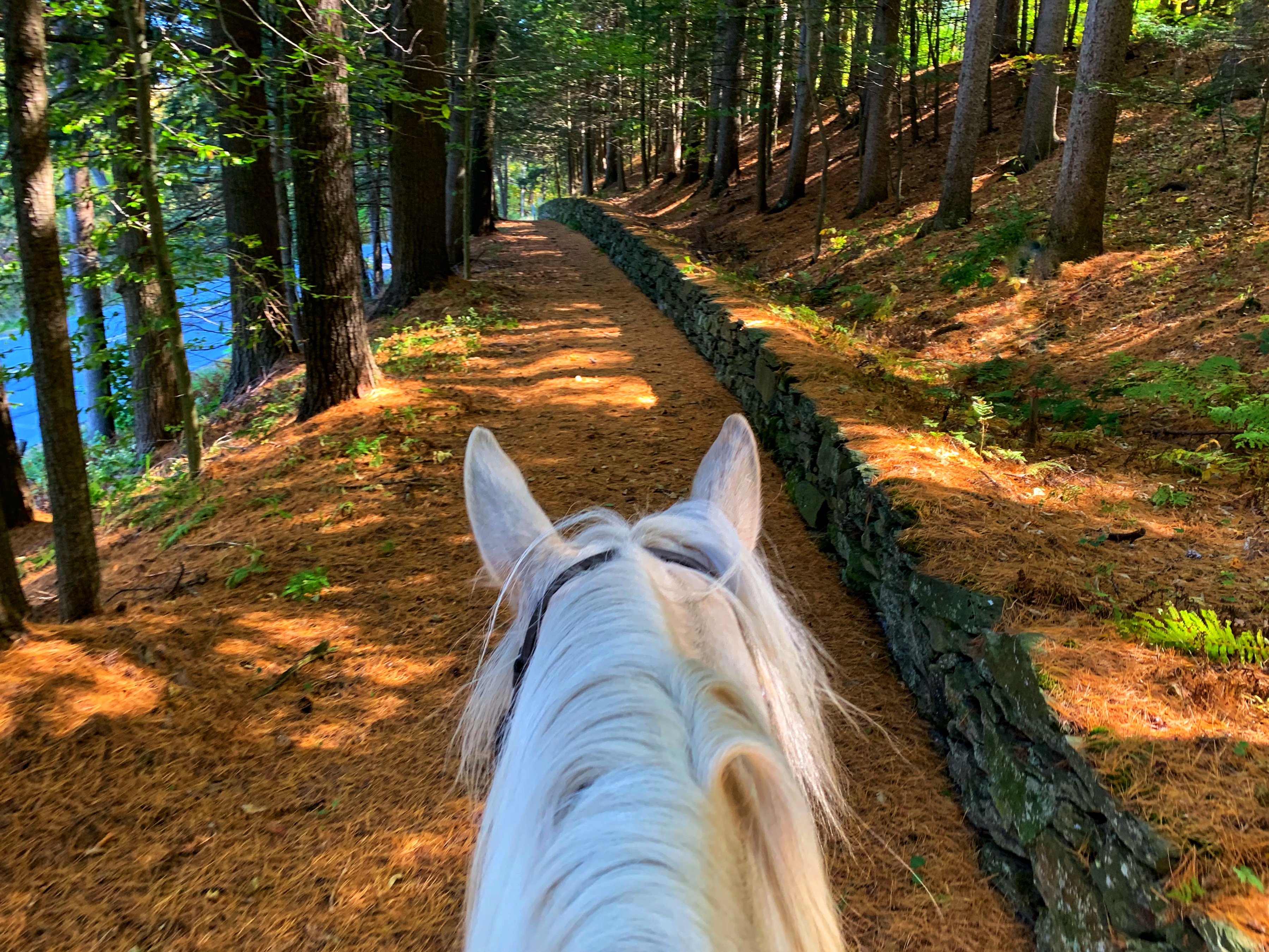 October started out with a trail ride at Billings National Park. We rode all through the park and then down to the farmer’s market to get lunch (and some apples for the ponies).

Then we did a 2 day clinic with Eric Smiley. The first day was a joint stadium lesson, which went really well. Eric is a big proponent of the good forward and don’t fuss with the horse methodology. The next day we had back to back private dressage lessons in the morning. The morning started off ridiculously foggy, but it made for a unique lesson. 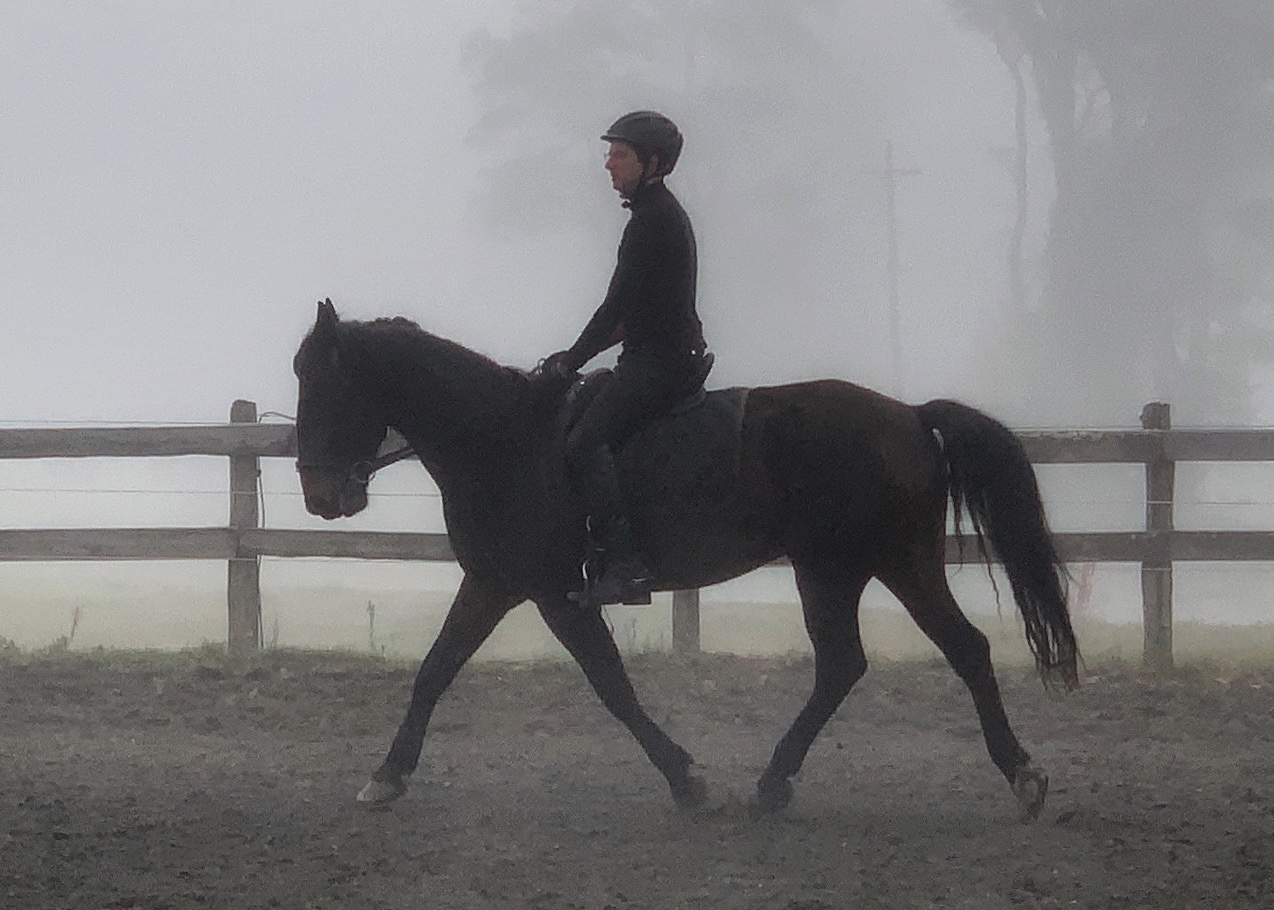 By the afternoon, the fog had burnt off and we were back for a group XC lesson for my husband and Eugene. I would have liked to do one, but I still don’t trust Levi in group XC situations and the clinic was overfull, so I could’t get a private XC. We audited the earlier and more advanced groups before it was their turn and it was interesting to see that he did a lot of the same exercises with all the groups – sometimes picking different jumps, sometimes just telling people to do it anyway when they questioned doing more advanced jumps. 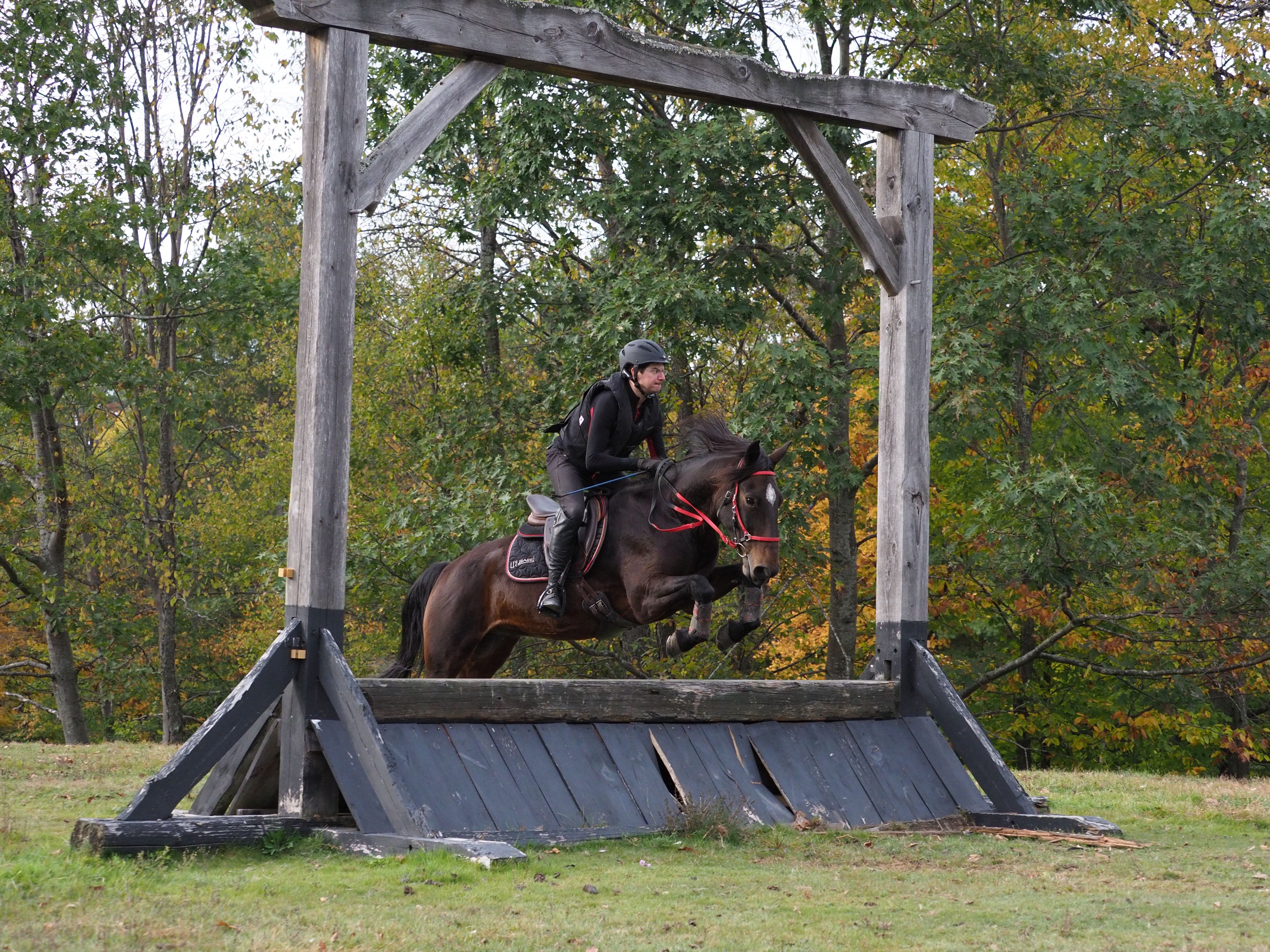 Eugene is always happy to jump whatever you point him at.

One interesting exercise Eric had them do was jump from only a few strides away. He started further out with the first person and then kept stepping back towards the jump for each person. By the time my husband went, they were basically a stride away. Of course Eugene was fine with this.

Let’s pause though and talk about this. Not the exercise. It’s cool and all, but I honestly don’t remember the point of it because I have been so terrible at blogging and wrote nothing down. Completely aside from the jumping, what’s so important here is that Eugene is not only accepting a stranger touching him, he’s reaching out for it. There was a time he wouldn’t even let me touch him and strangers weren’t allowed near him. Eugene has gotten better and better over time, but he’s gotten a LOT friendlier in the last year.

They also did an exercise with coming off a bank and doing a bending line to a nearby bench. This was actually really helpful for some of the other horses in the group who were overly exuberant about taking off after that down bank. Eugene just takes banks in stride. 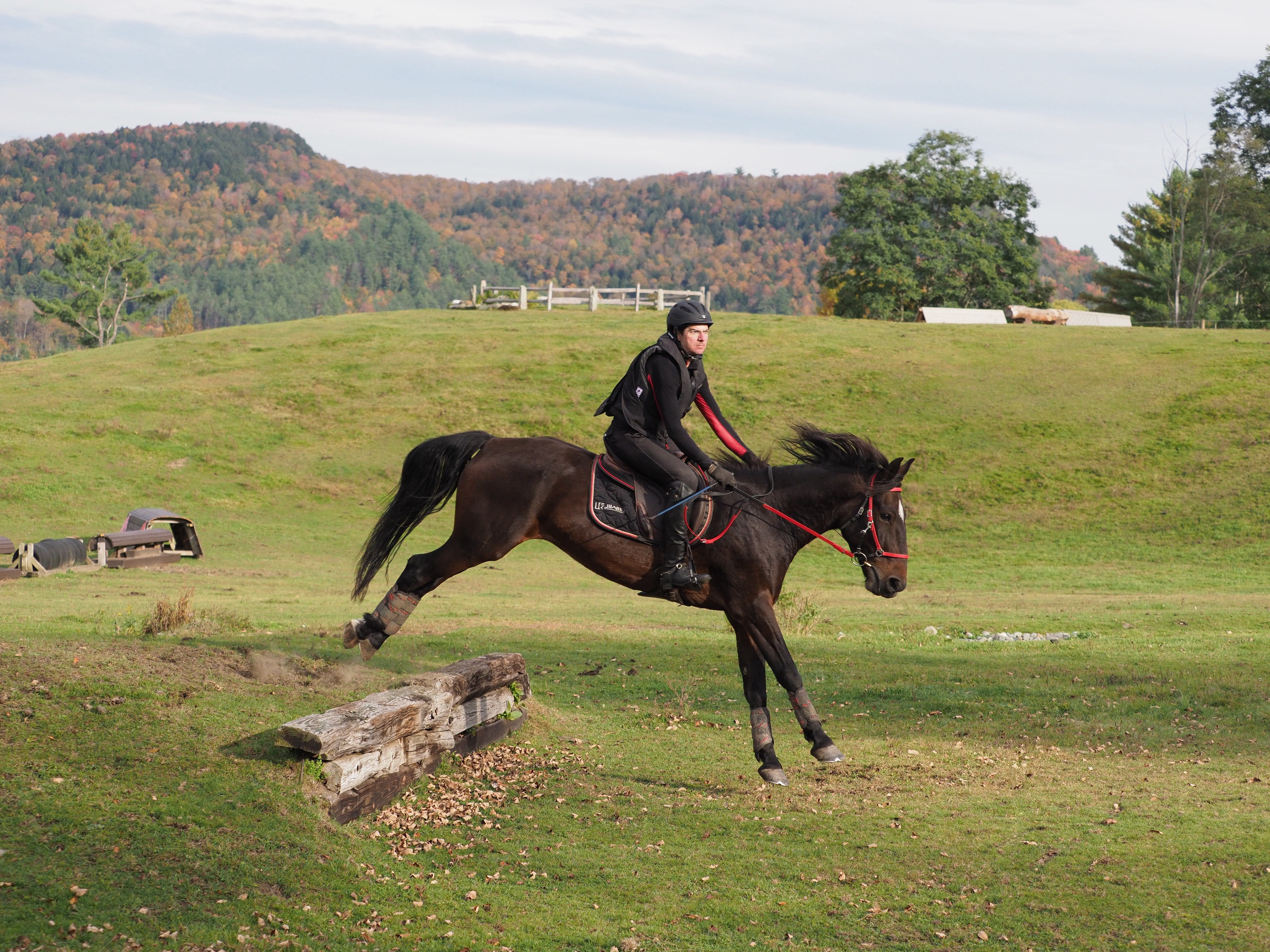 It was a great clinic though. Since Eugene has been struggling at anything aboveBN, it was good to have a professional help them through doing bigger jumps, even some training jumps. I’ll finish up this clinic recap with this shot because my husband’s expression makes me laugh. Every so often Eugene can pull out an unexpected overjump. 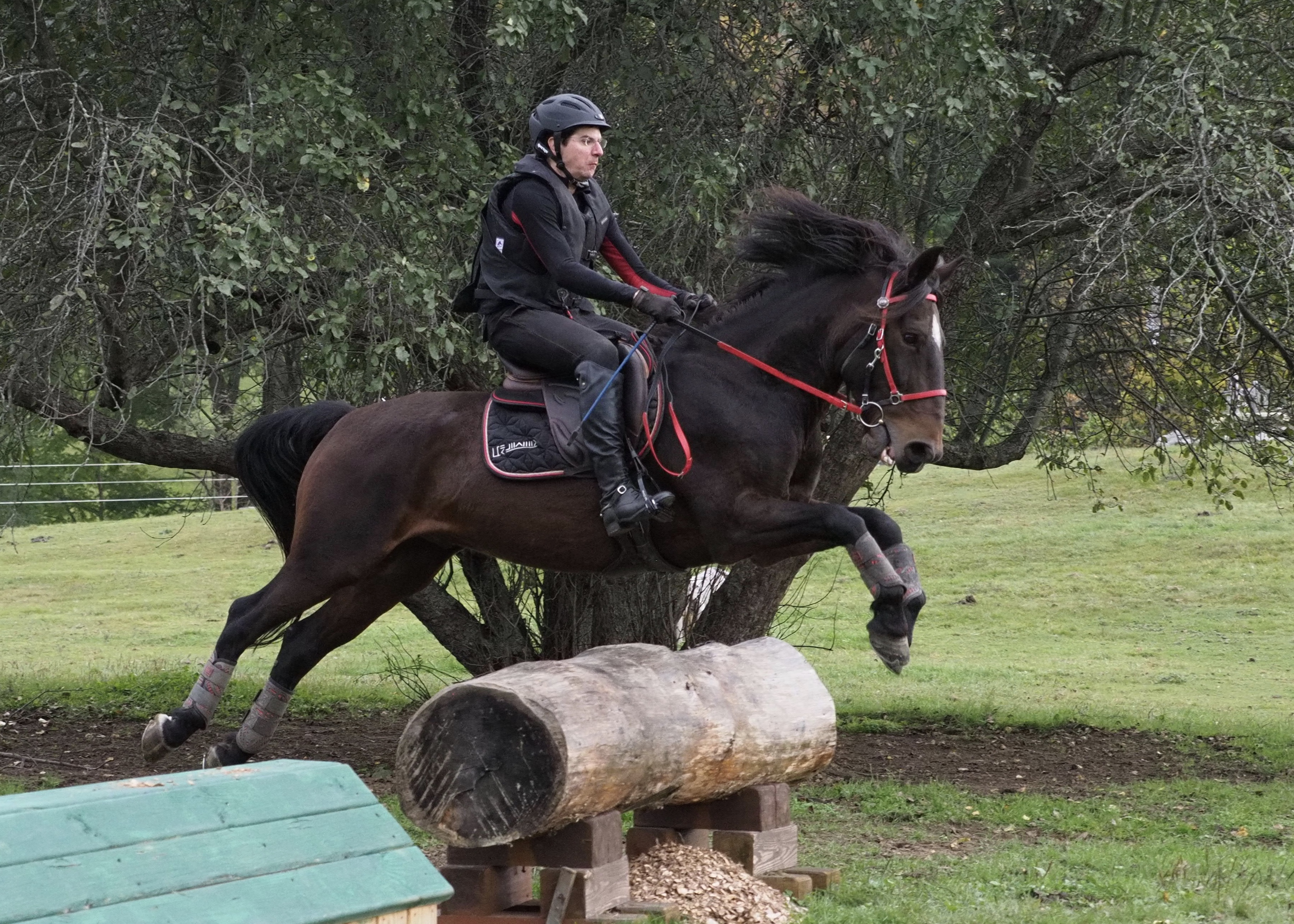 The clinic was Tuesday-Wednesday and on Friday we went down to GMHA for XC Schooling. We didn’t want to do a lot because we had an HT the next day, but it was one of the last few days that GMHA would be open for the year and the jumps had been set up for a different clinic so we figured there’d be some interesting options. 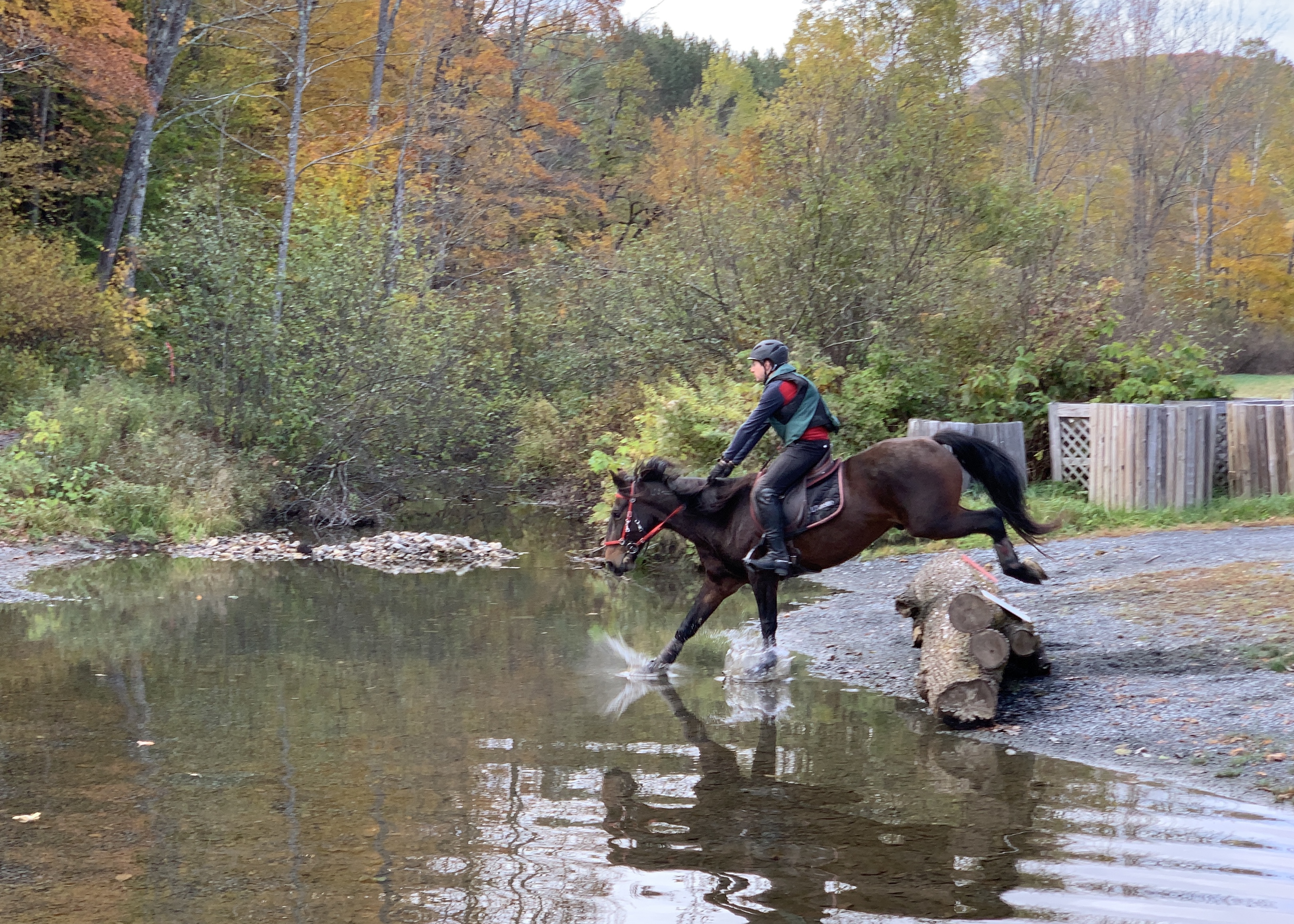 We were right. There were several jumps set up in ways you wouldn’t see at a competition, but that were perfect for practicing the things you would see at competitions. Like the little log into the water above: you don’t normally see jumps into the water until Training and then the jumps are so much bigger. It was nice to have a little log so Eugene could practice the skill without needing to do a really large jump. 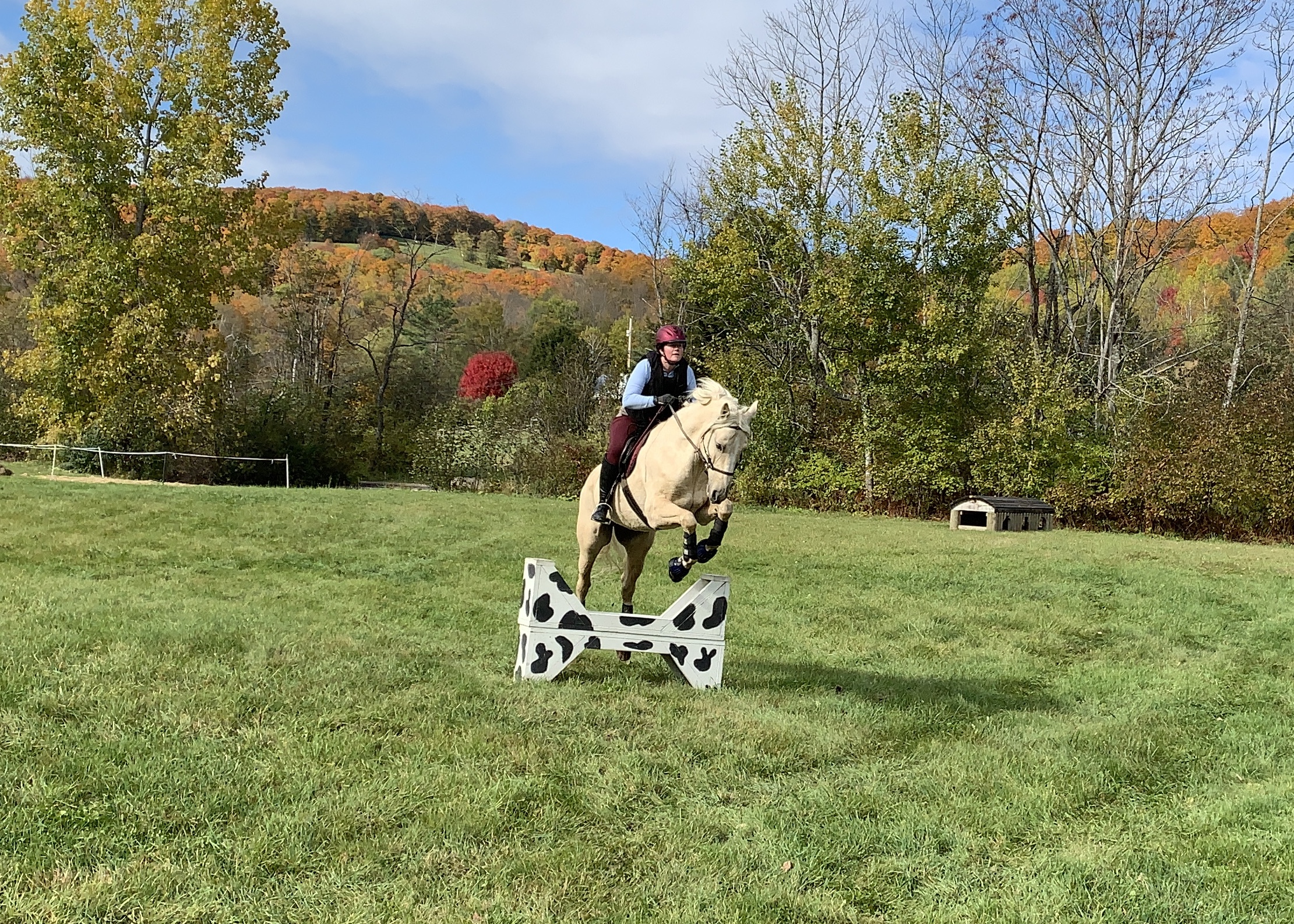 We even got to try out a skinny jump! Kind of. It was fun though. Both of us had run outs the first time and it was nice to go back and get it done.

I even jumped the new BN jump that GMHA added at the Fall HT that I thought was massive and scary and Levi obviously didn’t care about. 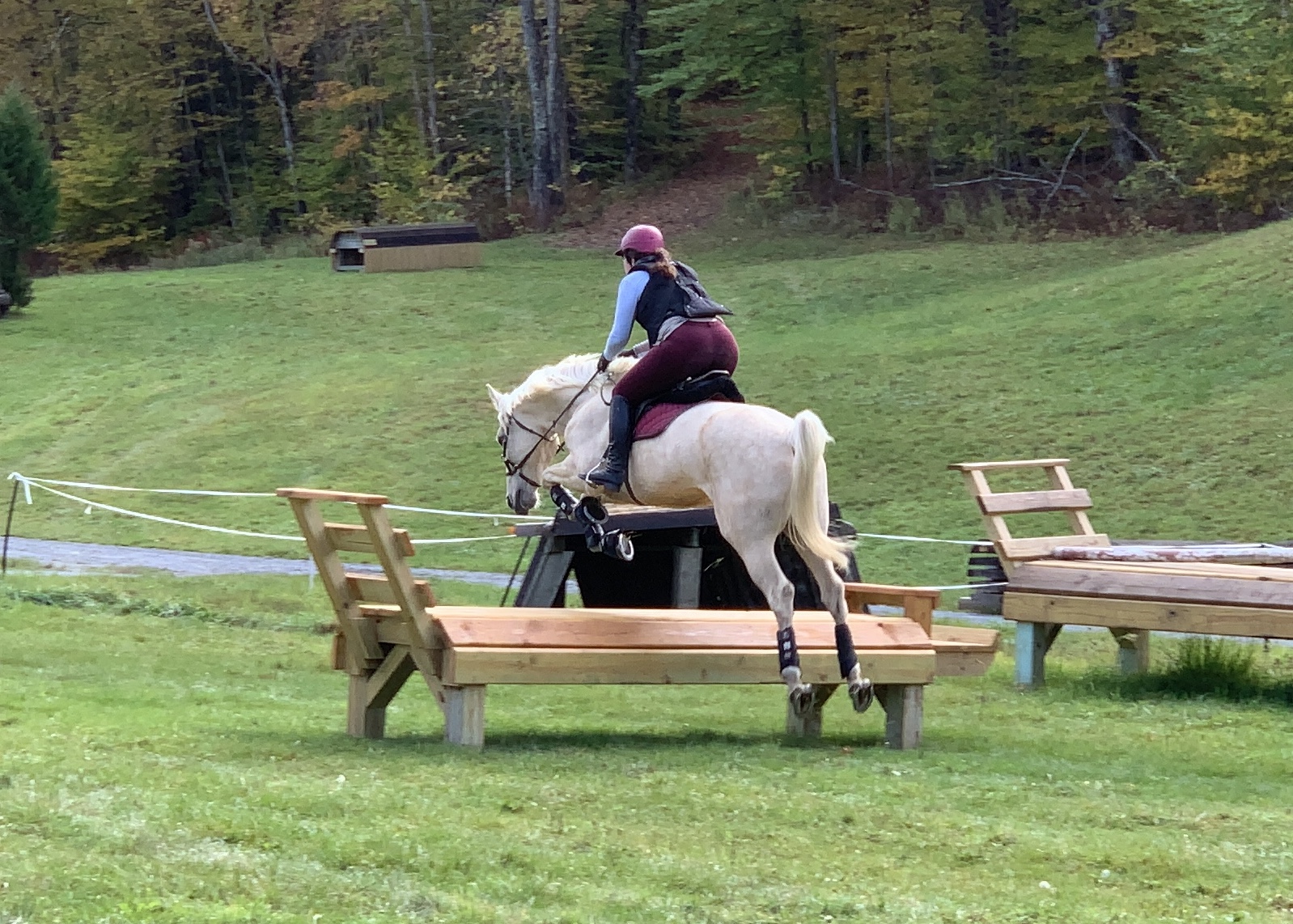 Since I hadn’t done the XC part of the clinic, it was really good for me to get out and jump Levi over solid obstacles before the HT the next day.

Since this post is already running a little long and I have a few more big things in October to write about, I’m going to break this post up into two parts. Stay tuned for part 2.

Just in case you were wondering, Nilla was also really busy in October: