My husband and I both competed at the Fresno County Horse Park horse trials this weekend. But before I get to the posts about that, I thought I’d cover the schooling we did leading up to it. After the Woodside CT, we met Kate for cross country schooling at the Woodside Horse Park on Monday. My husband had to work so I drove the ponies over and did a lesson with Kate before he got there.

Unfortunately, when Levi tried to kill me at jump #5 the day before, he wrenched something out in my back. I was stiff, but okay. I felt fine riding and we warmed up by cantering around the exercise track. We even cantered down hill without tripping! When I met up with Kate, she told me to get started by trotting into the water. Levi approached the water, slammed on the brakes, and I could feel a deep, stabbing pain in my back. Great.

We conquered the water, but my confidence was shot. I’m a wimp when it comes to XC to begin with. Add pain in to the mix and I can’t deal with it. I tried to go do a jump and he was bouncing around eager to jump. I knew he was going to hurt my back, so I made Kate get on him. I’m kinda liking this whole having a trainer thing. 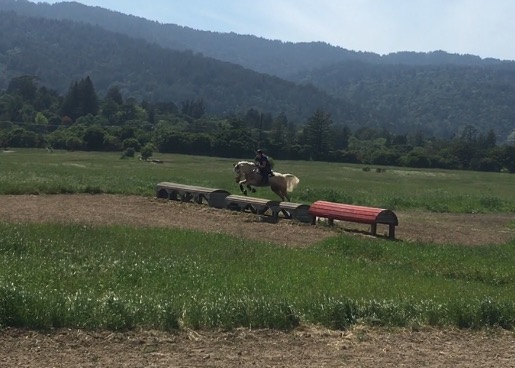 Kate schooled his *ss. Since his biggest issue is jumps he’s never seen before, she even took him over some Novice and Training jumps for me. Then I got back on, went over a tiny intro jump, eventually worked myself up to doing a BN jump. Then I was supposed to do a BN to the second water to another BN jump. We did the jump, he refused the water, and I just quit.  My back couldn’t take it. We jumped a different intro jump to not end on a quitting note and then ended it there.

Eugene is solid on XC and has already been competing this season so he didn’t really need schooling, but my husband wanted to do some ditch practice. Sadly, the ditch complex was filled with tall grass and weeds. You couldn’t even really tell there was a ditch in there and it seemed too dangerous to jump; we didn’t want Eugene breaking a leg stepping into the ditch by accident. 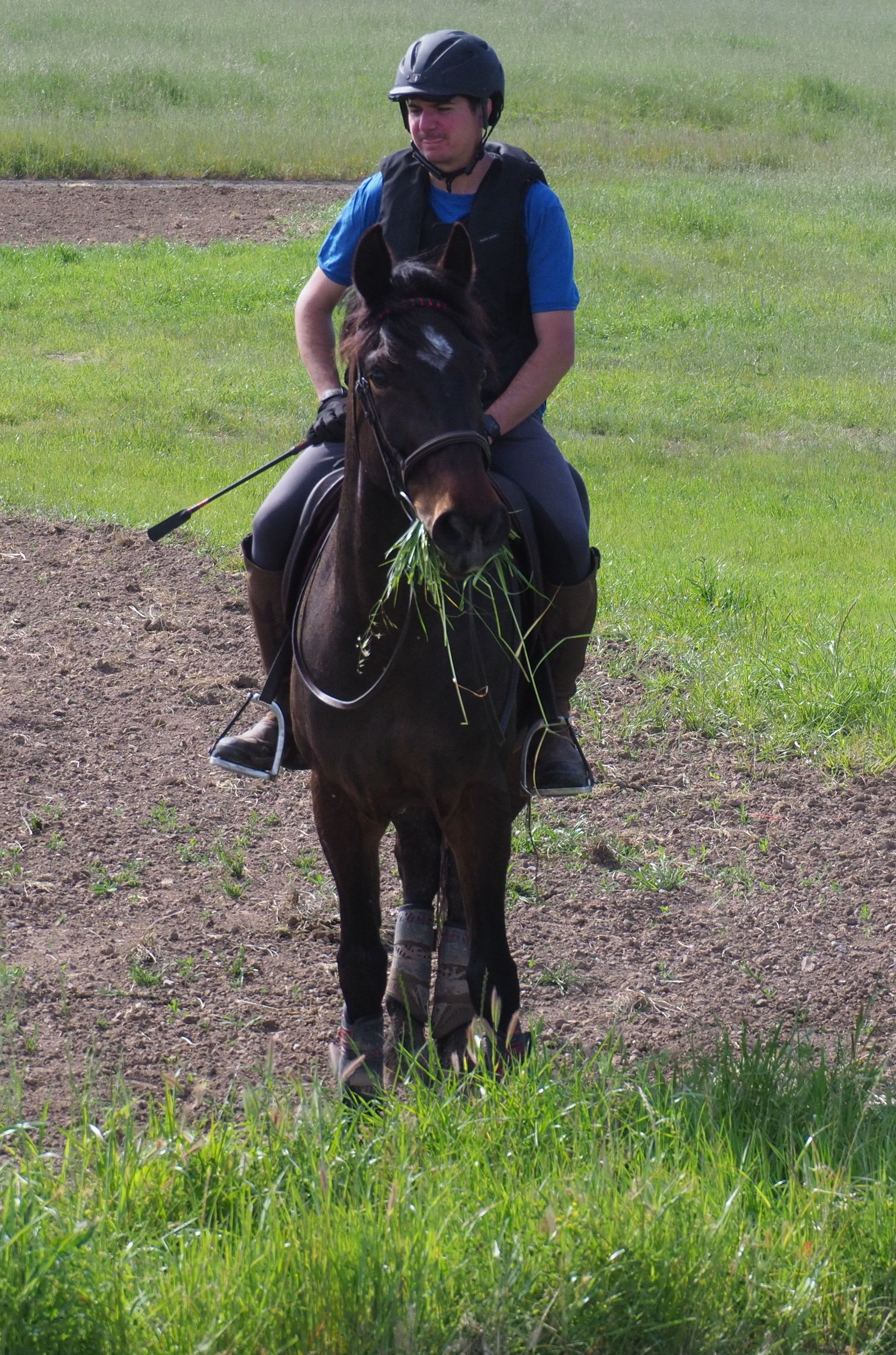 there’s a ditch in that snack spot

Eugene was ridiculously excited to be out on cross country. None of us have ever seen him like this. He was a snorting, galloping, dolphin-leaping and bucking package of overly-caffeinated Mustang. 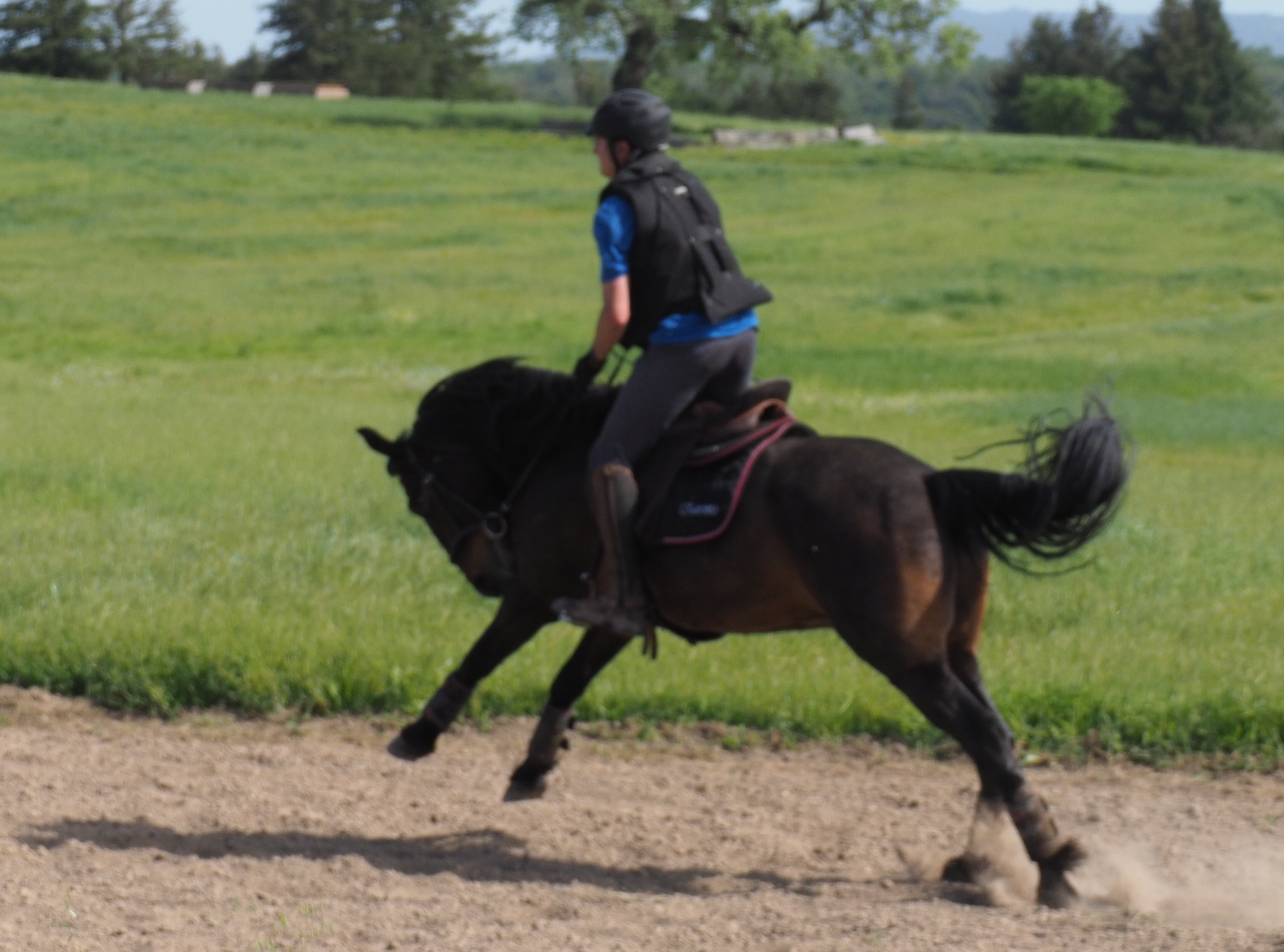 I so wish this weren’t blurry

He was just flying over jumps and taking off afterwards. We were all completely baffled. And laughing hysterically. At least David and I were. I think Kate feared for their lives.

Even presenting him to the Novice jump wasn’t enough to cool his jets. 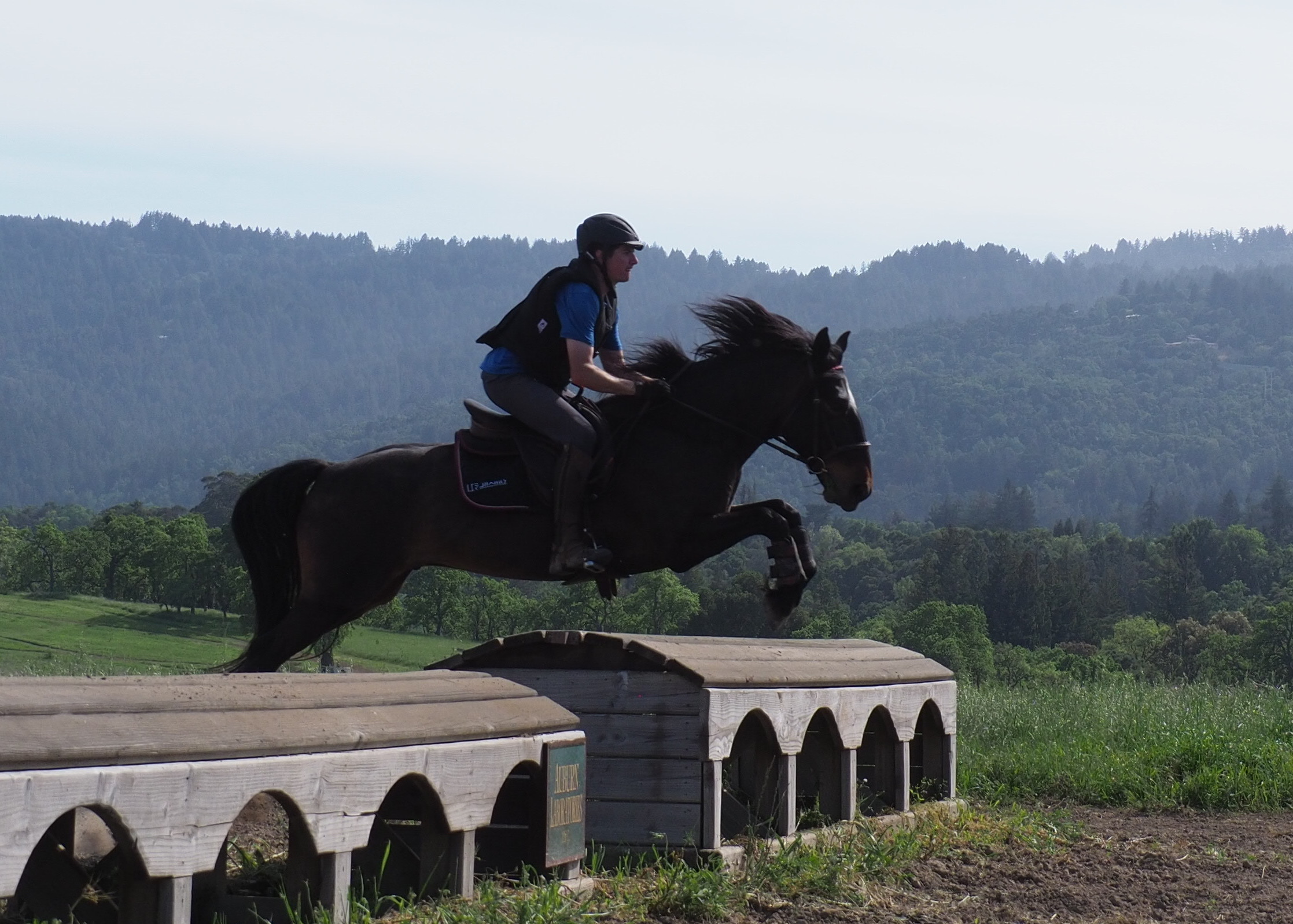 I’m sure other people are used to this, but as excited as Eugene gets about XC, he’s never acted like this before. He just wanted to go, go, go. 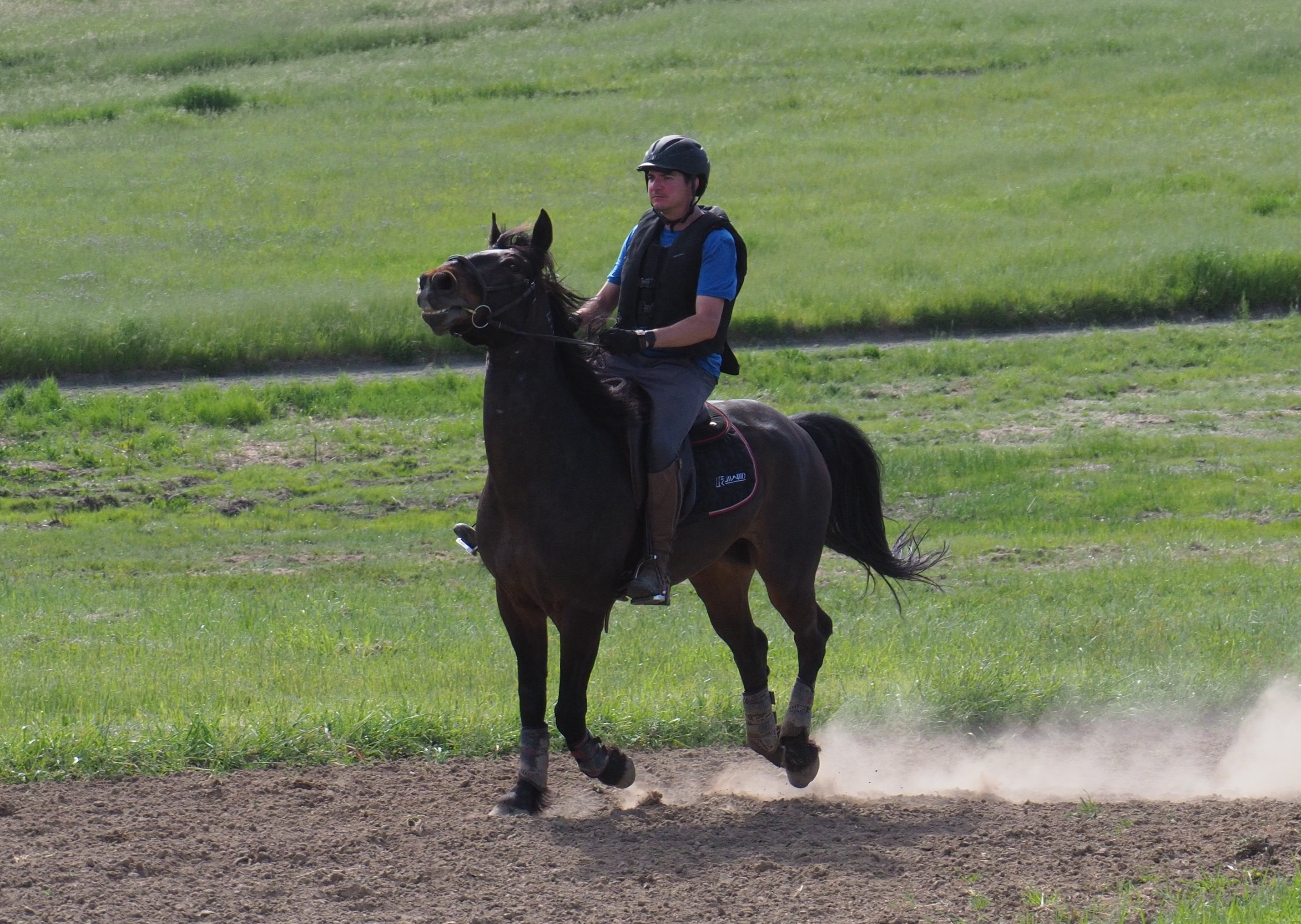 He also spent any time he was stopped screaming his head off because he was all by himself. 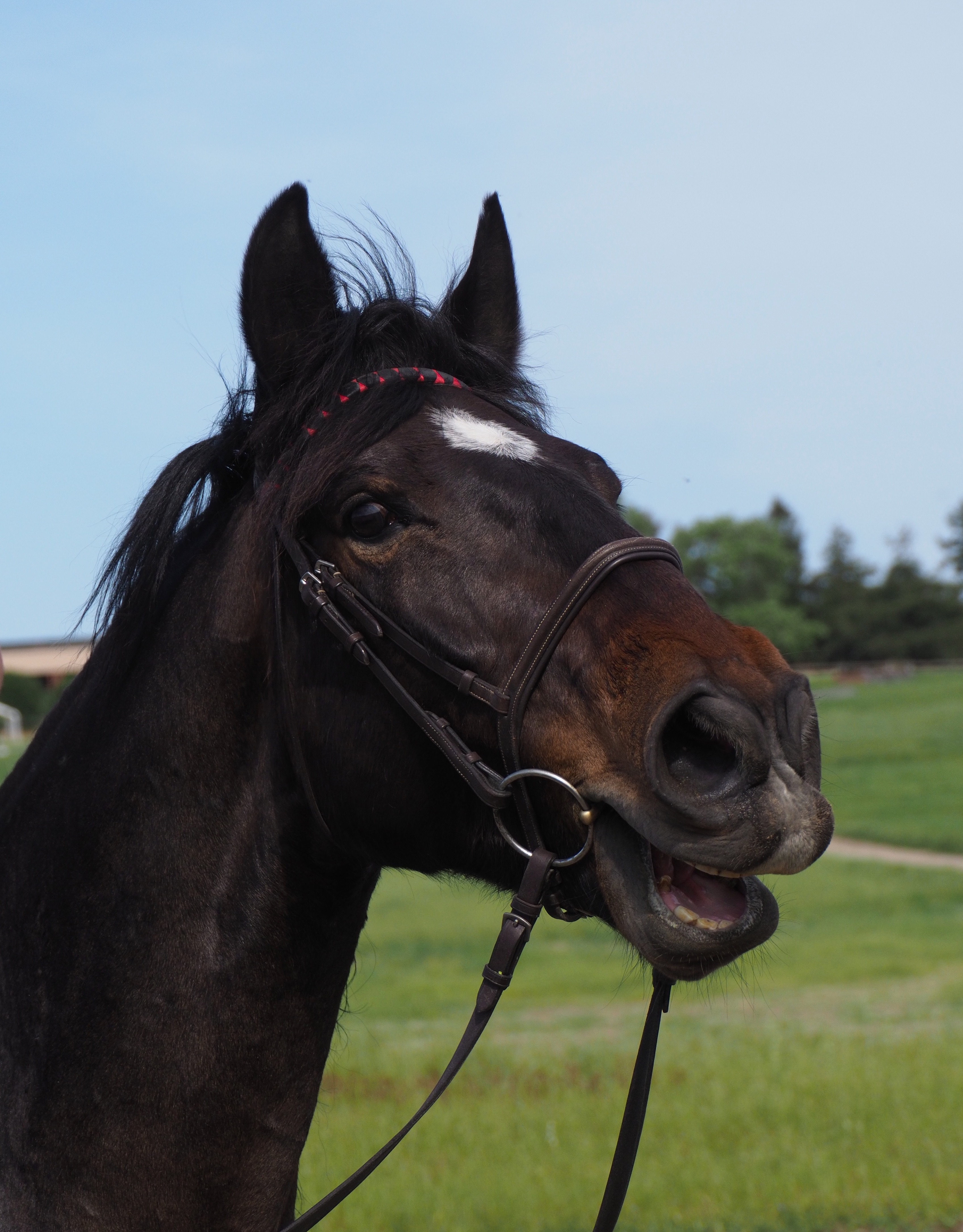 definitely going to be eaten by wolves

Once he realized he couldn’t school the ditch, my husband said he wanted to work on his own riding ability. Kate had them finish end their schooling by doing a combination log to coop, which is set at a 3.5 strides. In the past, Eugene has always ridden this really well at 4 strides, but he was such a nut this day, he was getting the 3 strides and then having to throw in a horrible, tiny chip stride.It was a great exercise because the jumps were small and thus not a lot of stress on Eugene. My husband had to actually sit back and give Eugene directions and Kate could yell at him until he did it right. 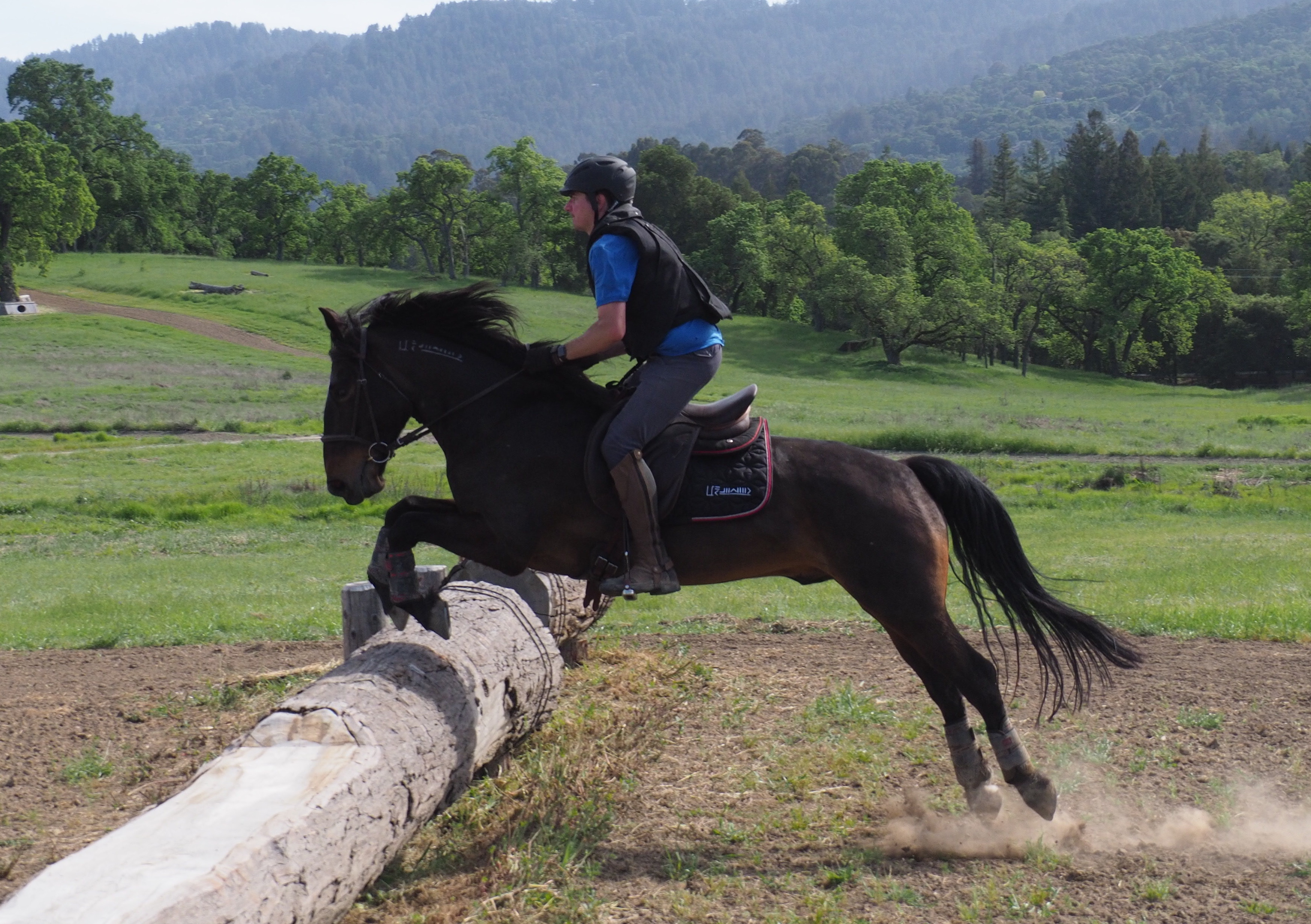 The next part of pre-show prep was schooling rounds at the horse park the day before. I drove the ponies out on Thursday to get them settled in and get everything set up. I had planned to do a little hack around to stretch Levi’s legs and expose him, but it was boiling hot out and I was tired so I bathed Levi and went to the hotel to eat dinner and clean tack. My husband drove out after work to meet me and we blanketed and fed the ponies around 10pm. Then we returned to the hotel and went to bed.

The next morning we were up bright and early. Sign ups for the schooling rounds were first come, first serve starting at 9am. We got to the horse park around 8 to feed the ponies and clean out their stalls. My husband asked if we should go over to the office at 8:30 and I said no, it’s too early. We went over around 8:45 and there was a huge line. I guess he was right. The line was long and moving at a glacial pace because everyone was signing up a million people. My husband had to work from the hotel for the day so he left and I sat in the line wondering why it was taking so long. Then I finally got to the front of the line and quickly became part of the problem. I was signing up myself, my husband, Kate, and 4 of her students. Some were doing dressage, some jumping, some both. I realized I couldn’t really organize all of that and panicked. So I just starting writing names down in time slots. Then I realized I didn’t have a check and panicked more. The office let me go get a check, but it turns out the 2 checkbooks I had with me were empty and I had to drive to the hotel and get the checkbook from my husband then drive back and pay.

I did a round of jumping at Intro and then another at BN height. Levi was overly excited, but we got around intro just fine because he can walk over those jumps so long as he doesn’t trip on them. He was much more wiggly for the BN round and tried to refuse the second jump, but I nudged him with the spurs and he scrambled over. We did get a rail, but a rail is better than a refusal to my mind. I didn’t get any pictures of the BN round so you just get the one intro shot. 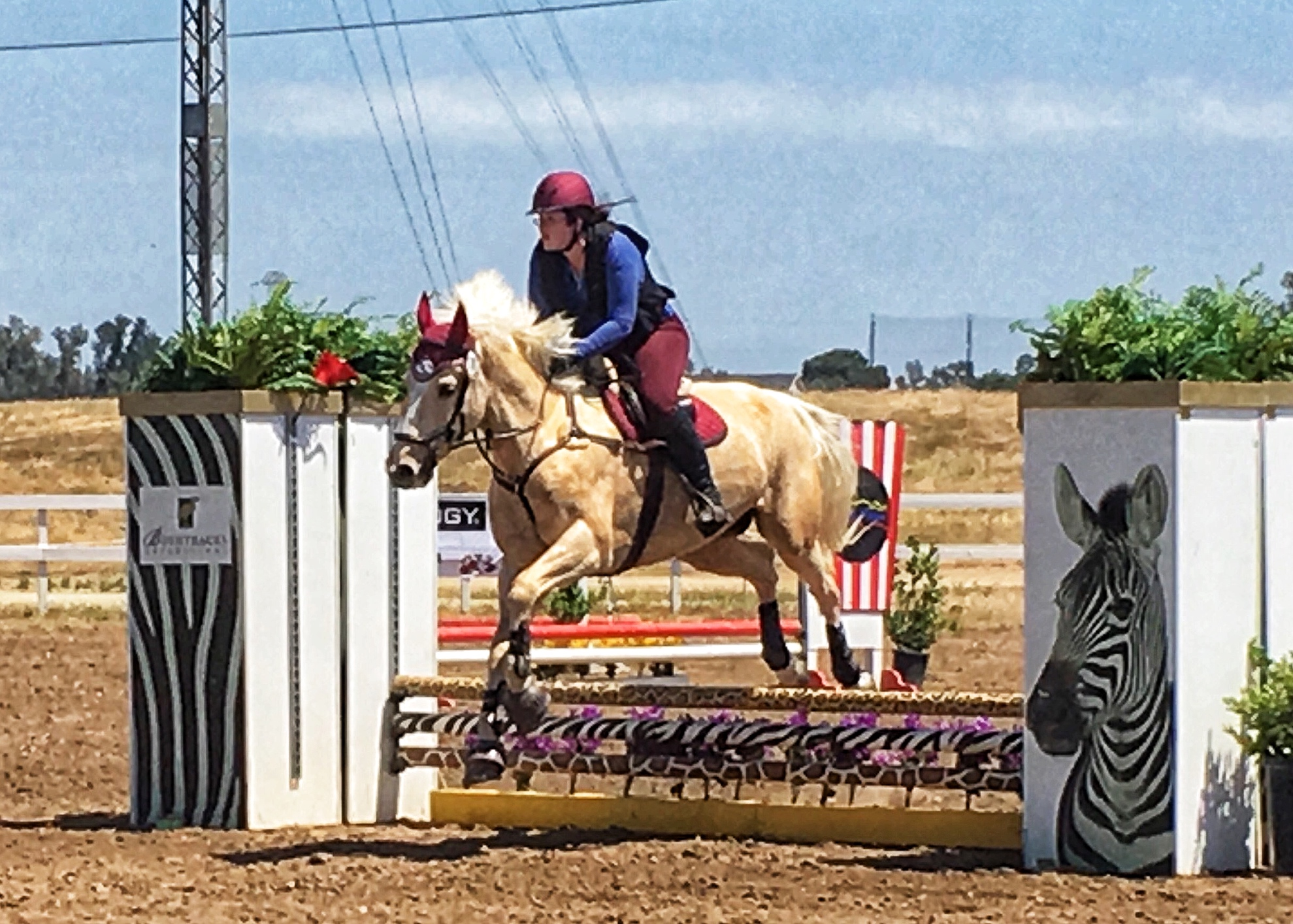 Because my husband had to work, I signed my husband up for the very last dressage test of the day and myself for the one right before him. The 2 people signed up before us scratched so there was a bit of a pause between the previous test and mine. When I went over to the judge to check in before my test, she thought they were done for the day and she and the scribe had to go about unpacking everything again. She was really nice about it though. I told her I might be doing some redoes if our canter departs got messed up and could she not ring me out. She encouraged that because this test didn’t count. They didn’t even add up the scores; it was all about the comments.

Most of the test was okay. We had a bad depart for the right lead canter and I thought we were on the wrong lead so I circled and tried it again. The second depart was much nicer, but it turns out we were on the correct lead the first time, I just didn’t realize it. Part of the reason he has a hard time getting his right lead is because he’s very unbalanced. His right lead feels terrible and I have to look down to see if we’re on the correct lead or awkwardly counter cantering because they both feel equally disjointed and weird.

Most of my comments were about not having any connection, not being forward, and lacking energy. Final comment was “horse must be active behind in all trot work as the quality of the trot determines how is prepared for canter.” We definitely have this problem. Especially at shows because I back off of asking anything of him in order to get around the test without an argument. It’s a shame too, because he looks so good when he’s actually moving forward.

I thought my husband’s test went pretty well, but he was a bit disappointed with the scores he got. The judge might have been really nice about letting me school movements, but she was not an easy judge. Which I actually really appreciate. So many times you go to a schooling show and get an awesome score, but that doesn’t really prepare you for a rated event. This judge was much more demanding.

None of the comments were really news though. Mostly that Eugene needs more bend and better acceptance of contact. Essentially what every lesson they have focuses on. It was still valuable to get in the arena and practice the test and reflect on the comments. 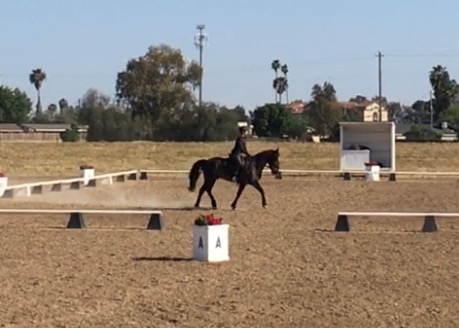 sorry for the blurry screenshot