I have signed up for the Woodside Spring Combined Test for 3 years in a row. Unfortunately, it’s been cancelled due to weather for the last two years. I was fully anticipating this year’s event being cancelled as well, especially when it rained earlier in the week and we had to cancel our lesson due to our arena being closed. But the sun came out to dry everything up and even to make it disgustingly hot by the time Sunday rolled around.

The setup for this event was pretty cool. It was a stadium course in the arena, but they brought in cross country jumps. For BN, the cross country jumps were all set up as options with stadium fences. We ended up getting there pretty early so we walked the course after checking in. It was a really fun looking course: mostly long lines with room to move out, but with some challenges. The options were interesting because the lines often worked a lot better for one or the other.

Of course we had to get through dressage before we could get to the fun part. And we all know how much Levi loves dressage. My time was 11:46 and I wanted to get on early to have plenty of time to warm up and get him calmed down. The warm up ring was the same small one from jumping at the JK show, but it was empty of jumps which made it possible to navigate around the chaos more easily. 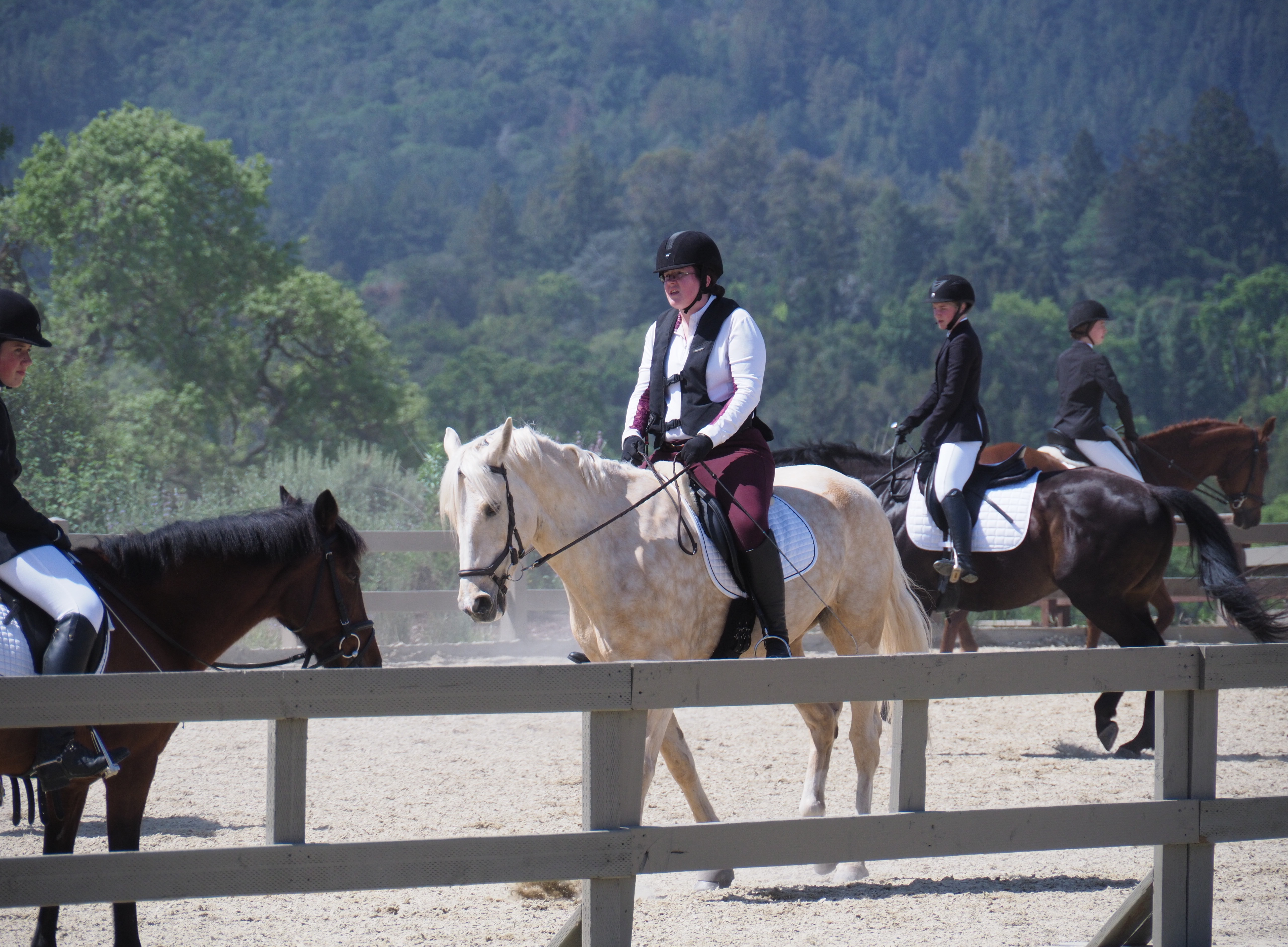 After I’d been warming up for a bit my husband came over to ask what test I thought I was doing. I said A because when I had asked him the night before, he’d told me A and that’s what I’d memorized. Well, it turns out it was B. He learned this from watching multiple people get rung out for doing the wrong test and then needing a caller to finish doing B. Every division except for BN was doing their A dressage test, but BN was doing B. Because why? Who knows.

My husband asked if I wanted him to call the test for me, but I said no. I have done it before, it just wasn’t fresh in my mind. I quickly ran over the test with my husband, went back to warming up for a bit and then came out of the warm up to stand for a bit. It was really hot and they were running behind and I didn’t want to exhaust Levi or sweat myself to death either. I went over the test another time. When it was finally closer to my time, I went back in to the warm up only to discover that Levi thought he was done and was mad and insisted he did not in fact know how to do canter departs. I schooled a few until we got them and then went to wait. I did meet a blog reader who was also showing in the BN division and recognized Levi. I love meeting readers so please come say hi if you see me out and about. Anyway, it was finally time for our test. 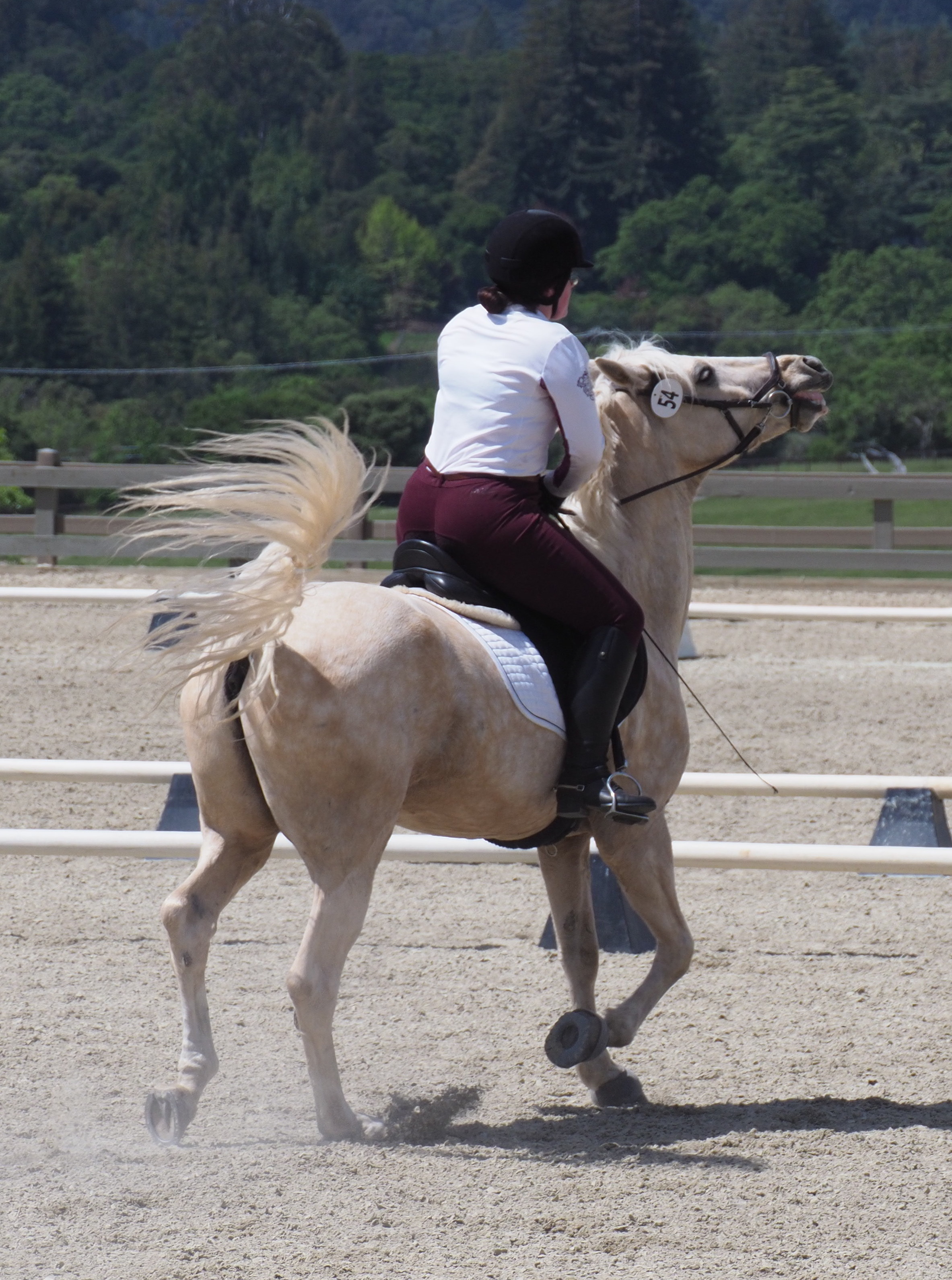 That was the first time I asked for the right lead canter. The following picture was the 3rd or so. I lost track. We tried multiple times. We never got the right lead. 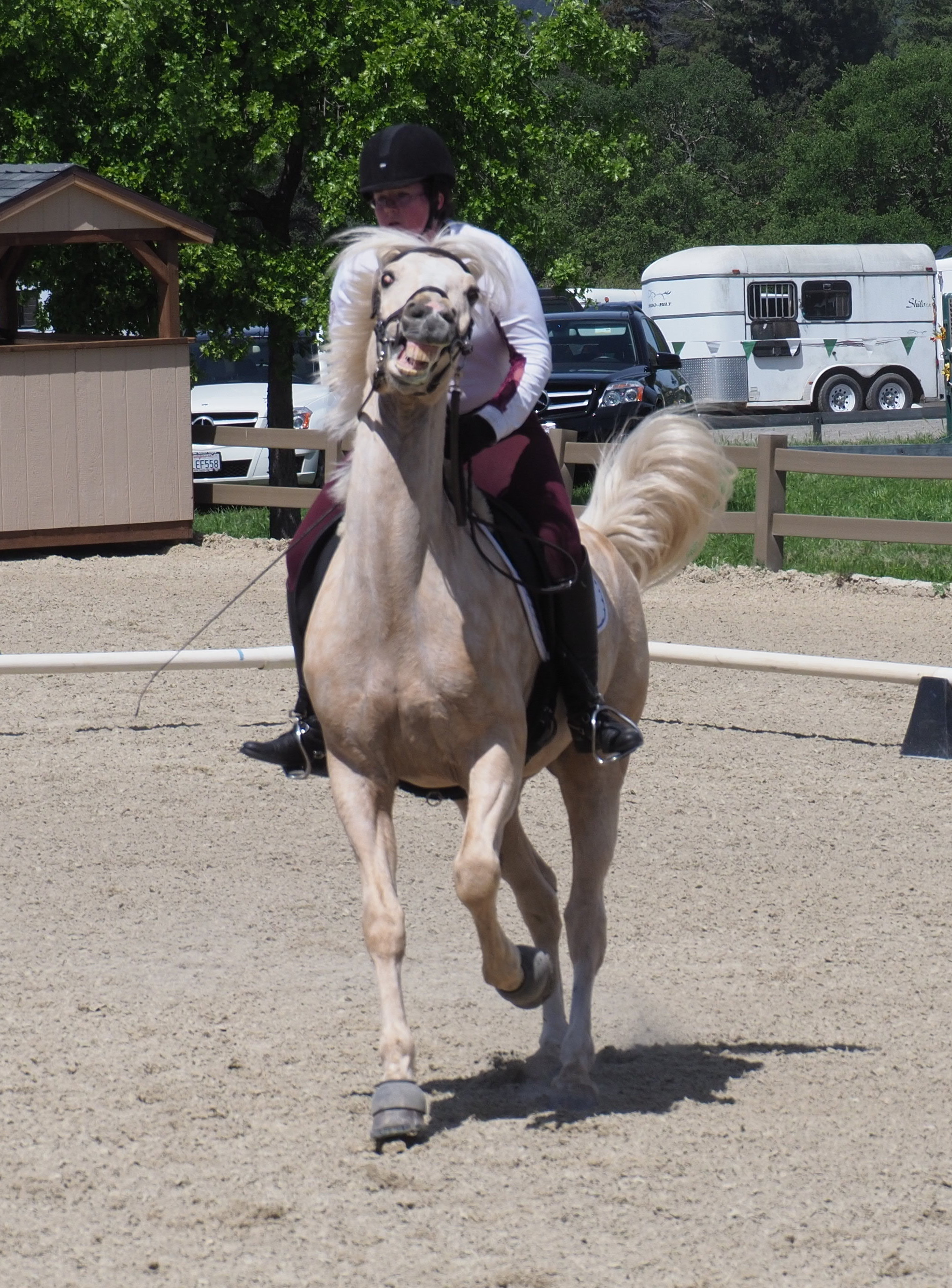 We got a 2. From a judge who was pretty generous all around. A 2! 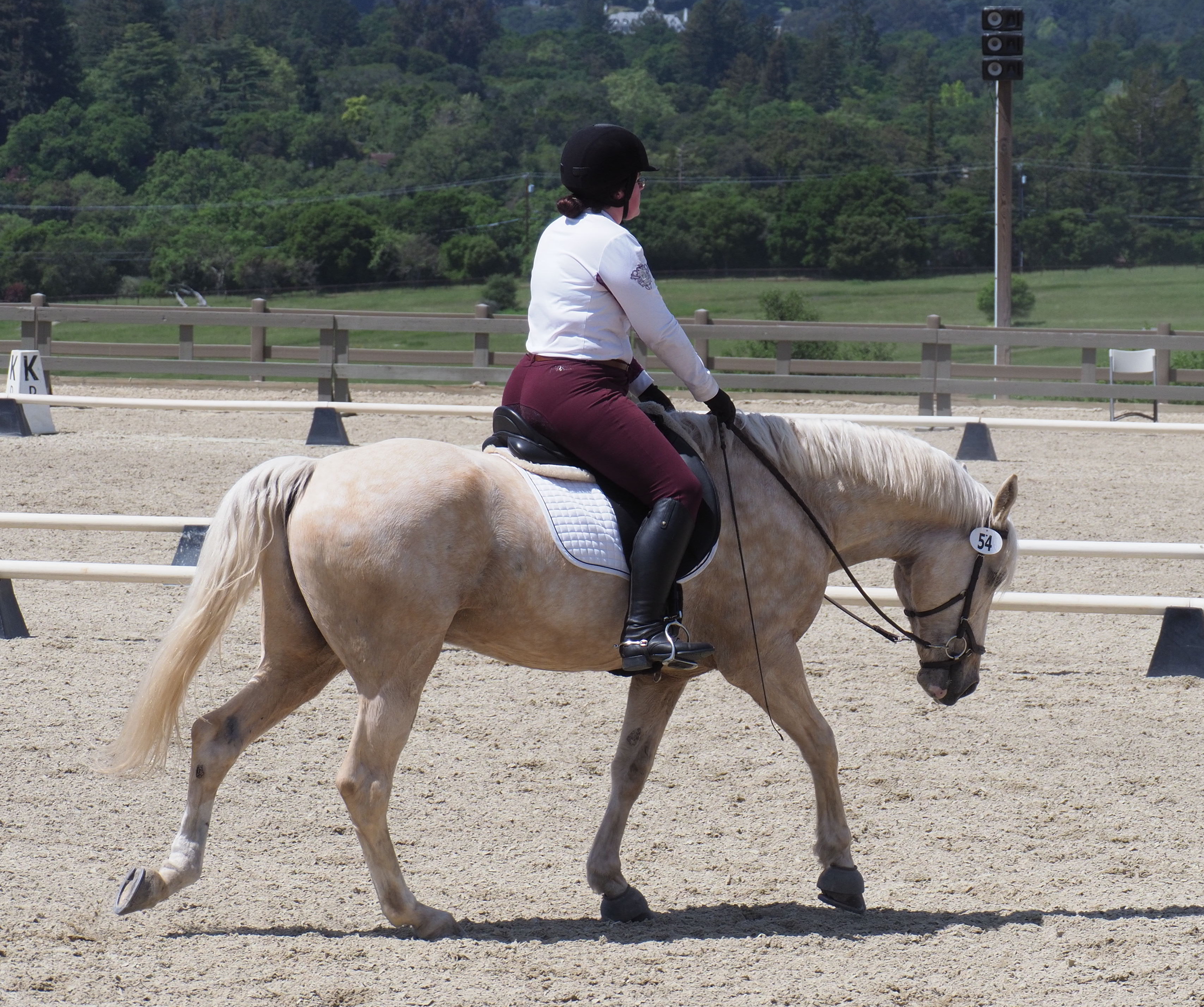 The second half of the test was a bit better. He got a 7 for his free walk and we got a 7 for the turn up center line which is often one of our worst scores. 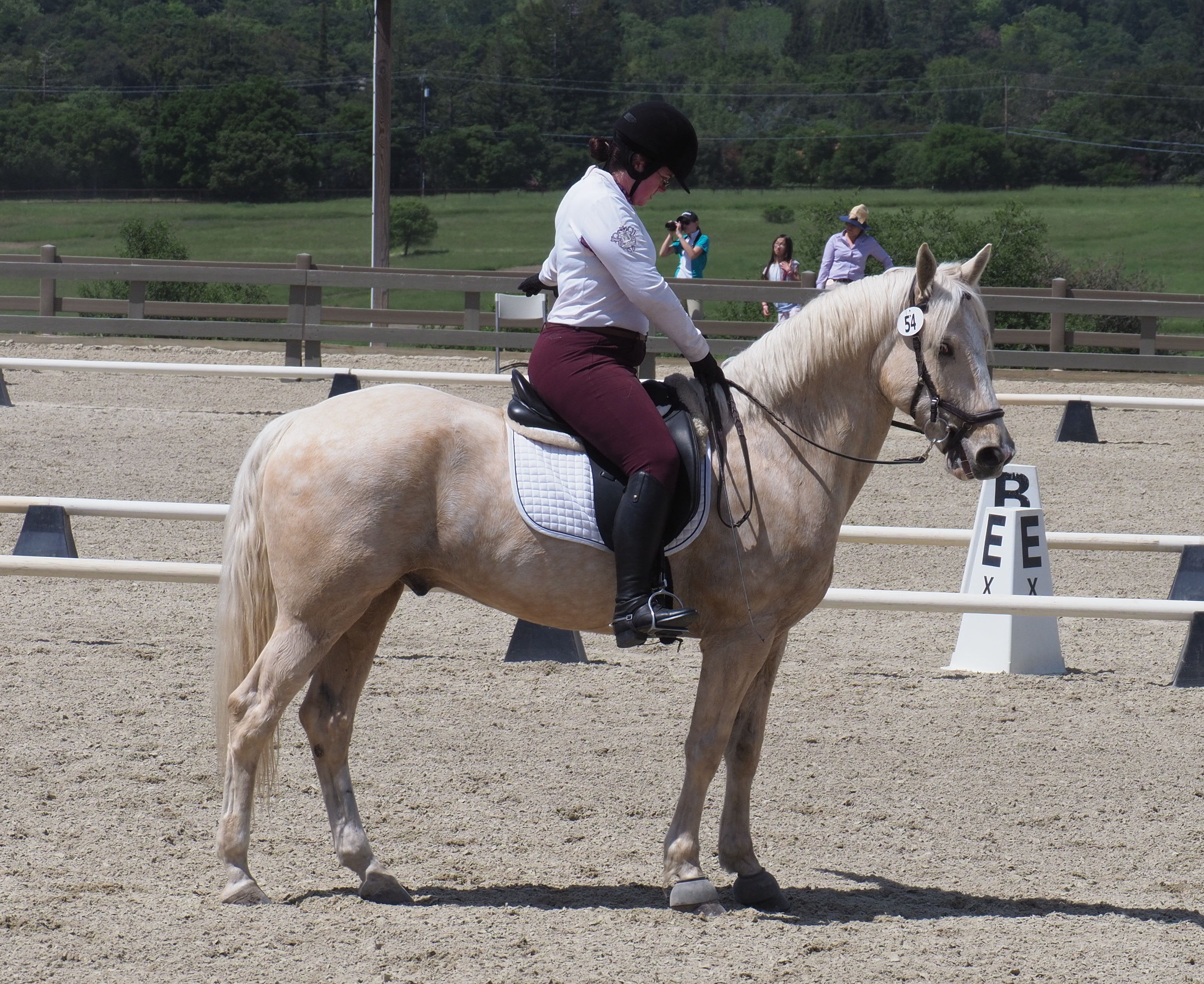 I didn’t bother to school him afterwards. Because dressage was running late, we only had a short bit of time to change tack for jumping. And I was kinda just all around done with it at that point. Done with dressage. Done with this horse. Done with horse ownership in general.

But there wasn’t time for ennui; we had jumping to get to. Since he was already warmed up from a muscle perspective, I just wanted to pop him over a few jumps and really get him forward. He was great in the warm up: seeking the jumps and powering around. Since it was stupidly hot, we called it good at that. 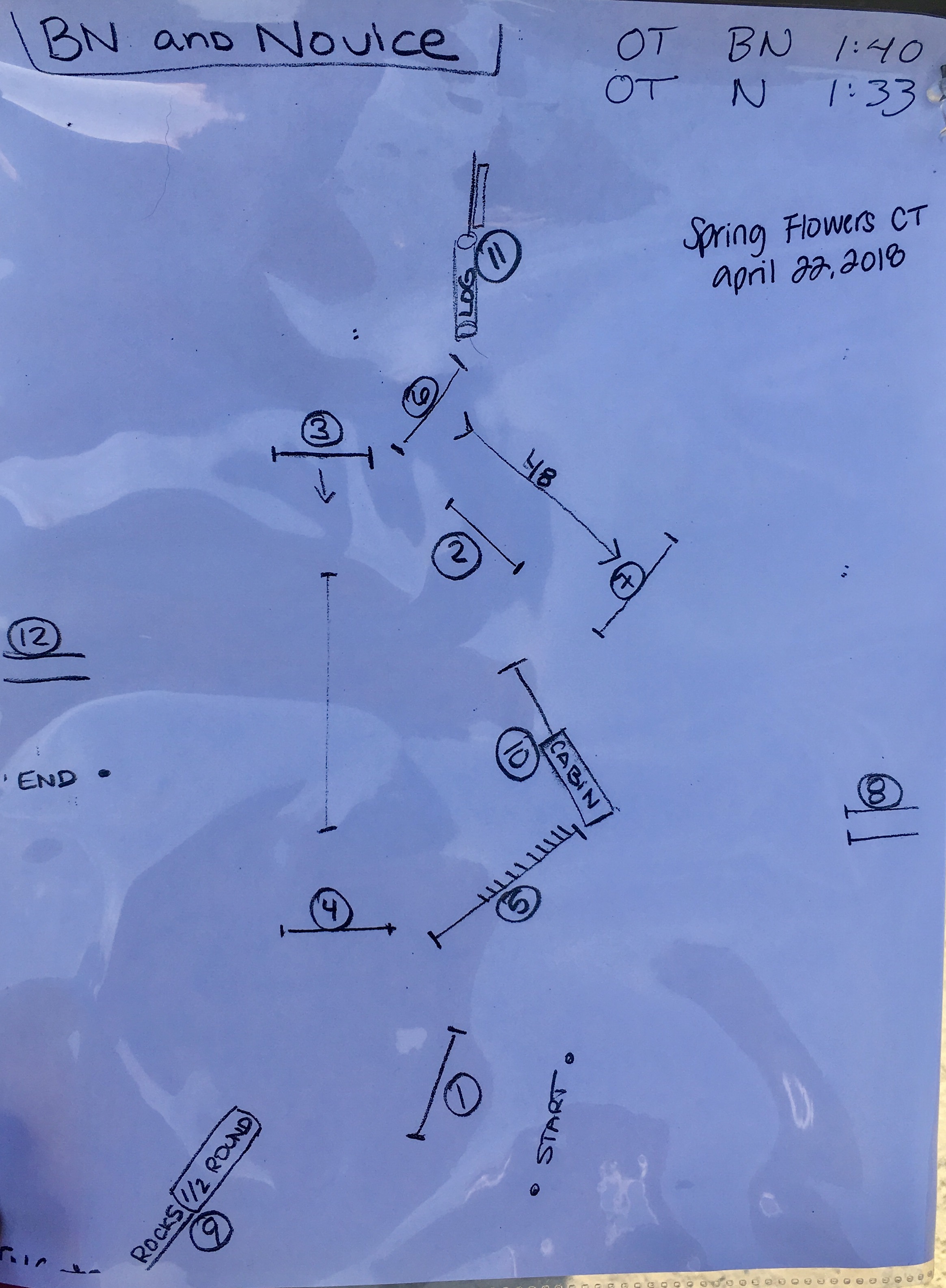 The first jump went great. He was forward and taking the jumps nicely with no attitude. 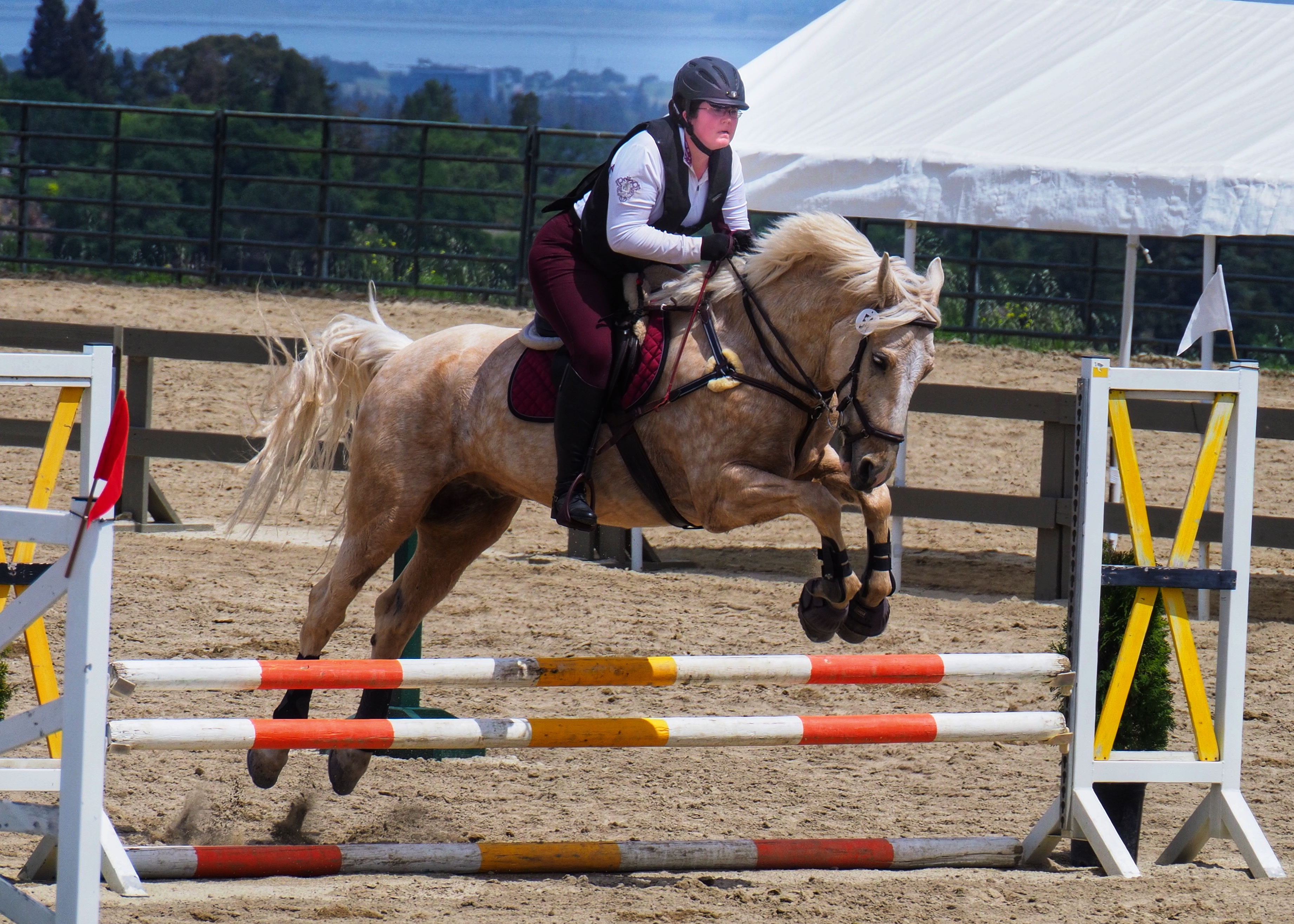 A lot of horse had been refusing the 2nd jump. The jump itself was a regular stadium jump, but it was a bit claustrophobically placed between #3 and #10. That’s my guess for why it was riding badly. I pushed Levi hard just in case, but he didn’t care. Although he did get as close to it as possible. 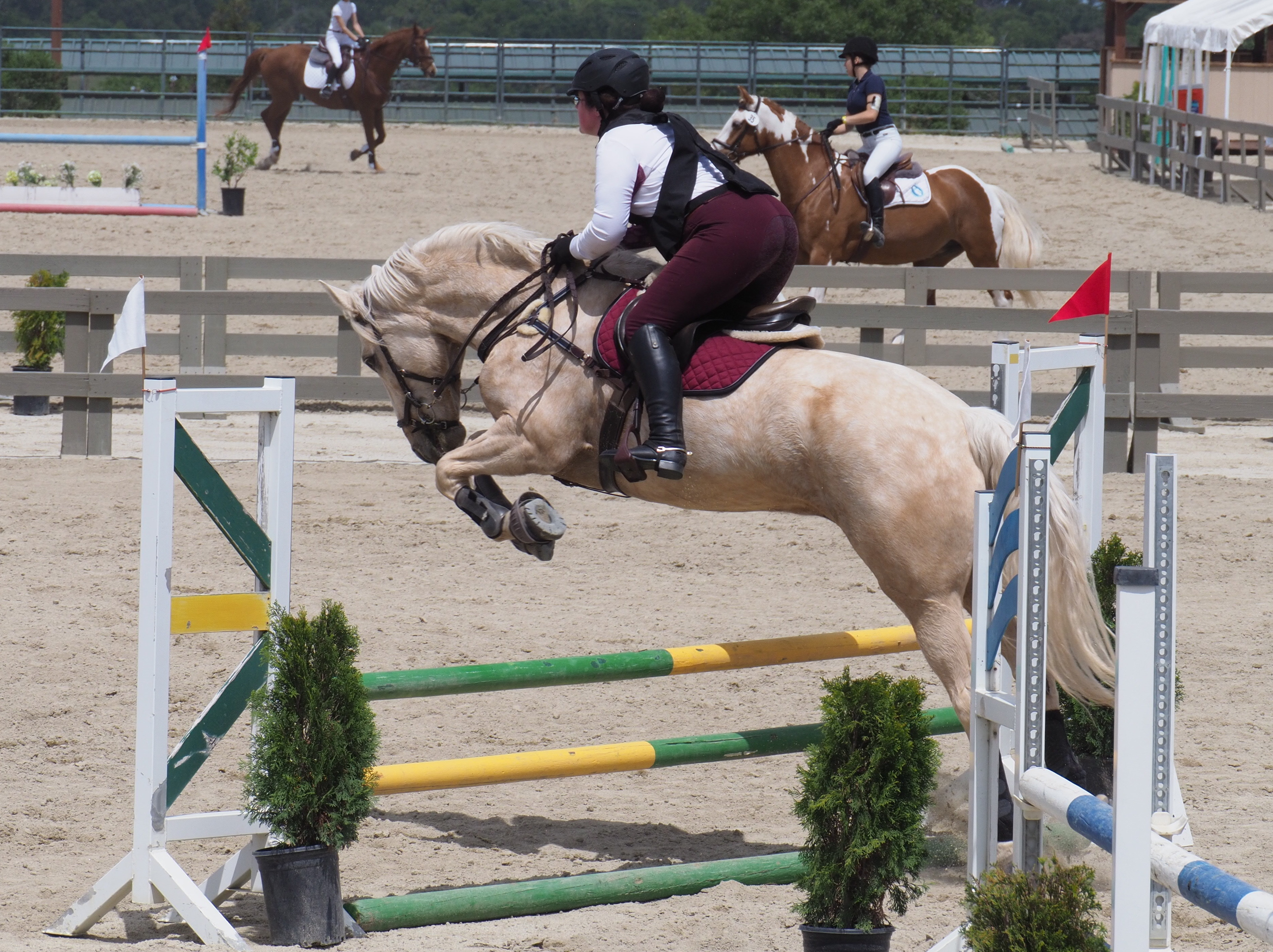 The #3-#4 line rode pretty well. he got in close to both, but cleared them nicely and moved forward the whole way. 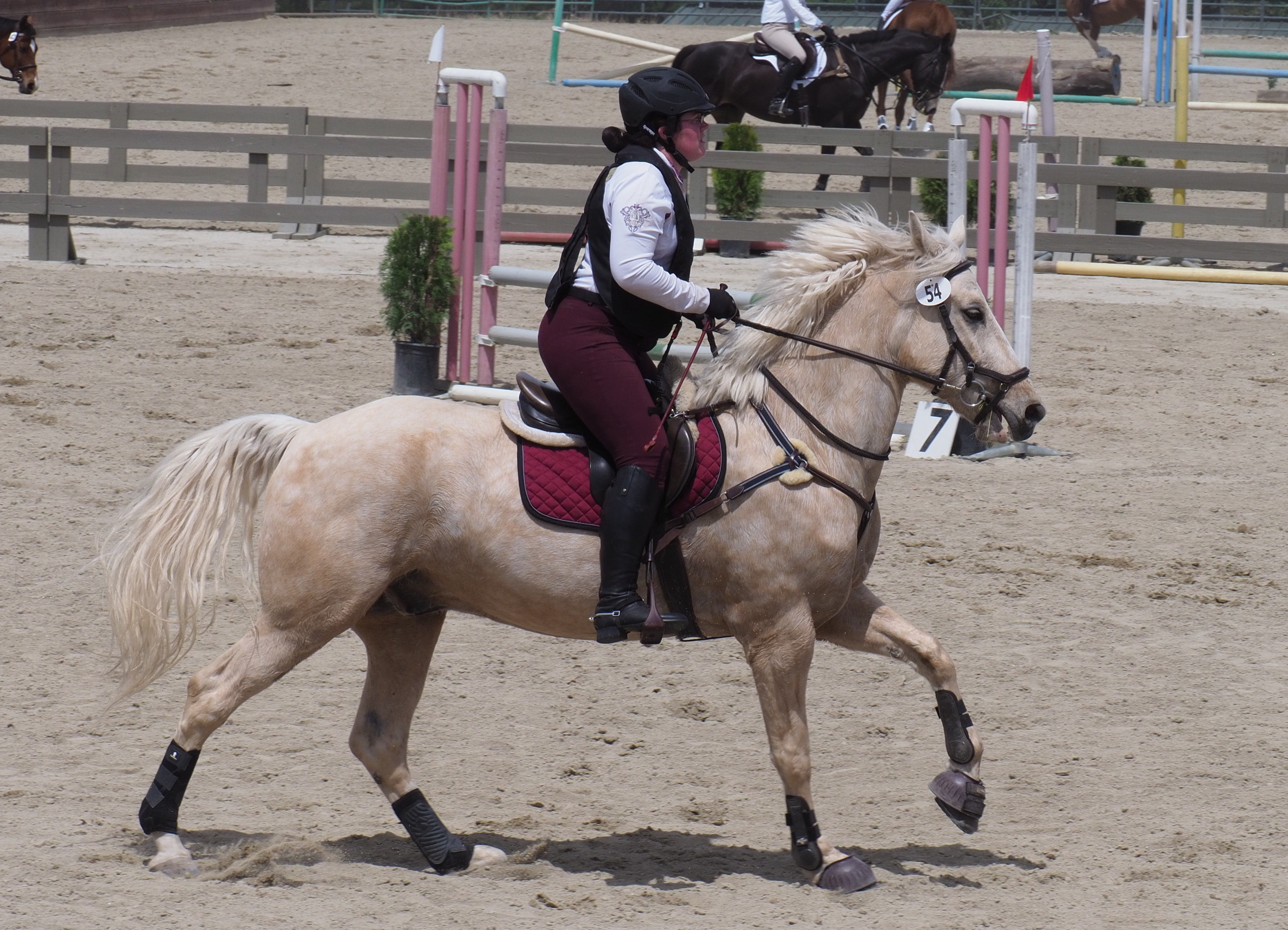 The we came around to #5 and it all fell apart. I thought he was going to take the long spot and leaned. Obviously I shouldn’t have leaned. Obviously I should never lean and I should just let the horse jumping move me out of the saddle as I follow the horse’s motion. Well, theory and actuality aren’t the same. I really thought he was taking off and tried to go with it. He decided to dive in an extra half stride. This extra stride was so unnecessary I can see his front foot touching the ground pole if I zoom in. 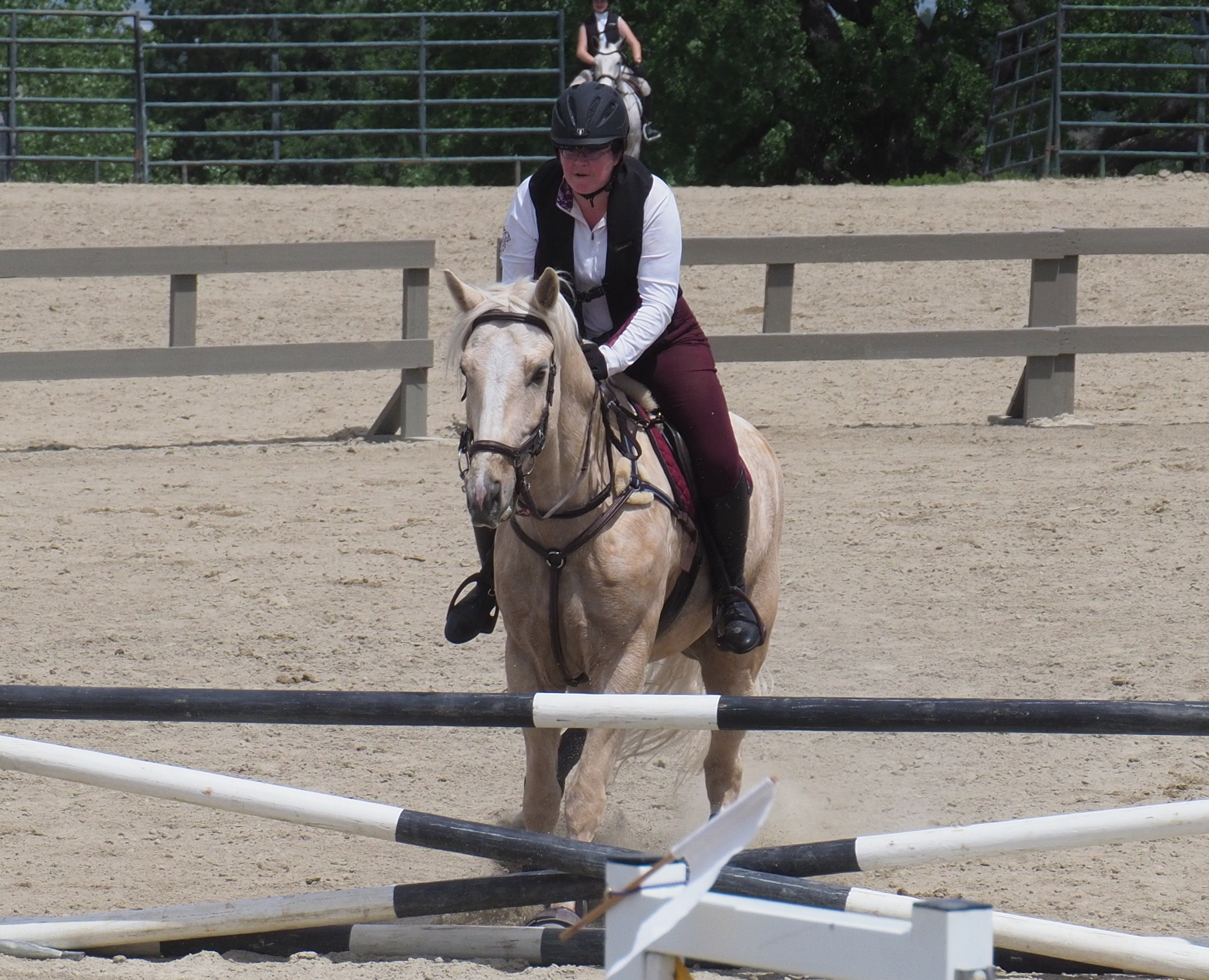 While Levi might not know how to pick a take off spot for the life of him, he is very good at the no touchy game. In a herculean effort to make it over the jump despite already being on top of it, he curled his body up and over that thing. 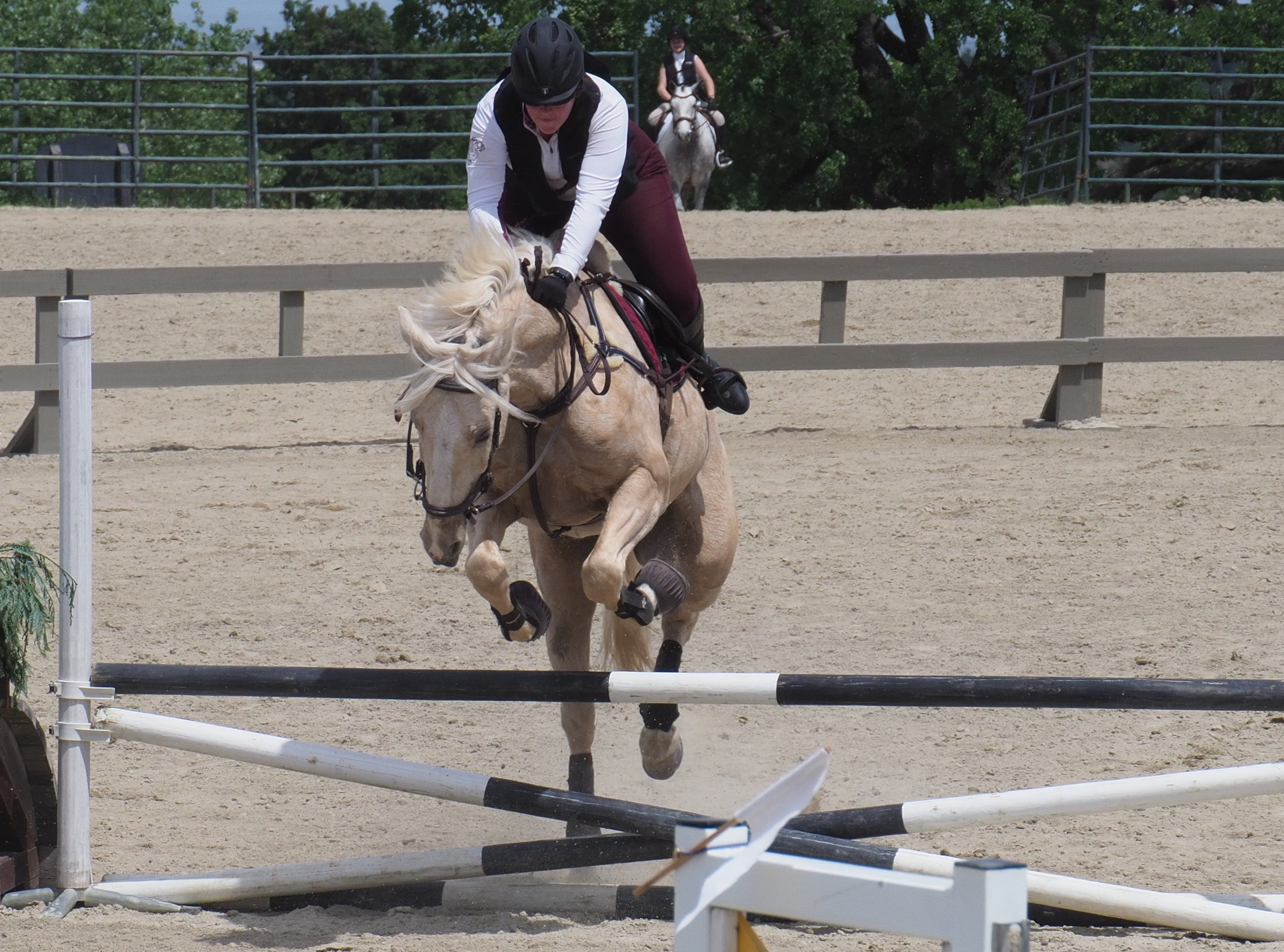 Since I was leaning forward, this action bounced me out of the tack. 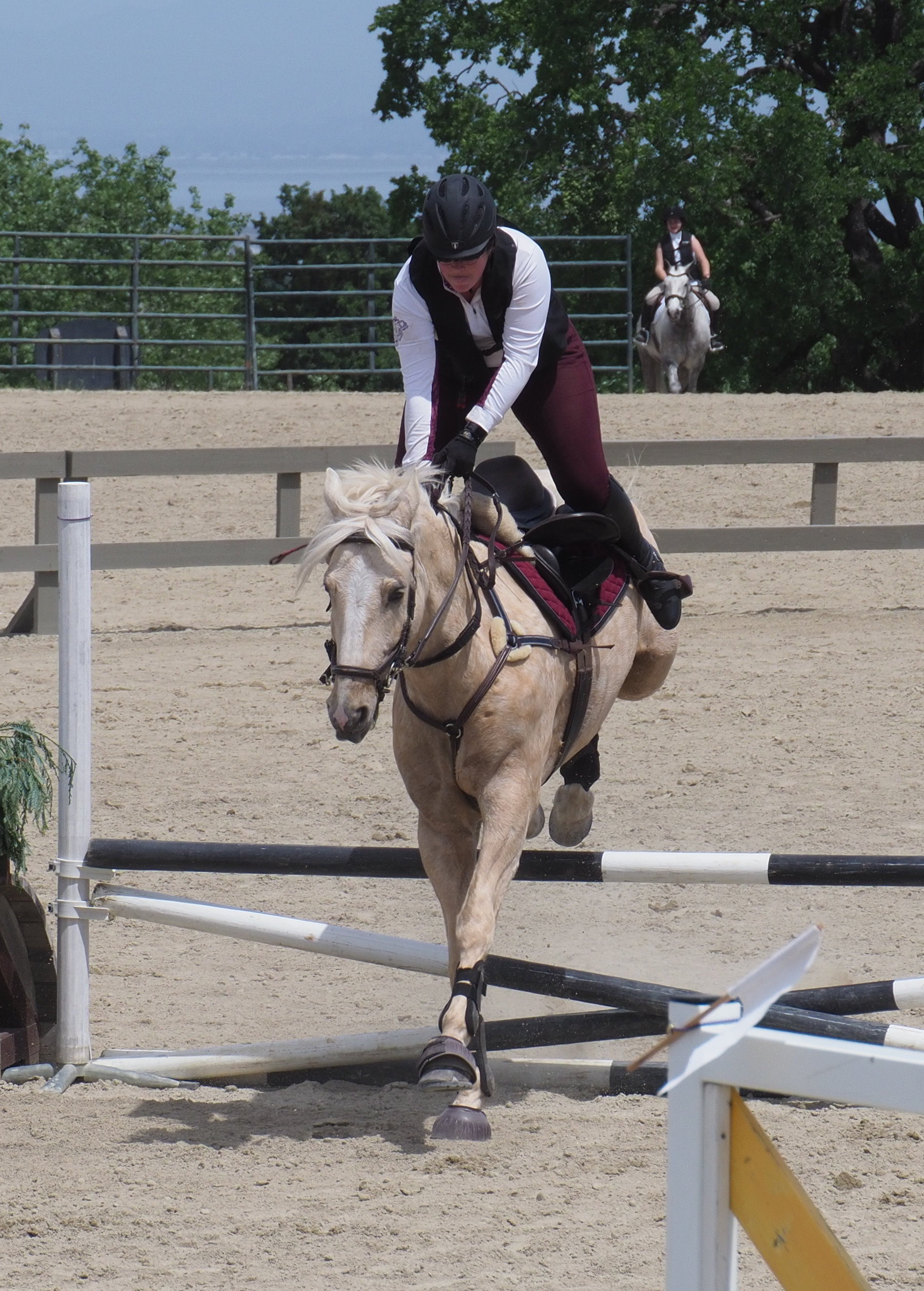 I lost my stirrups and landed in a heap on his back. 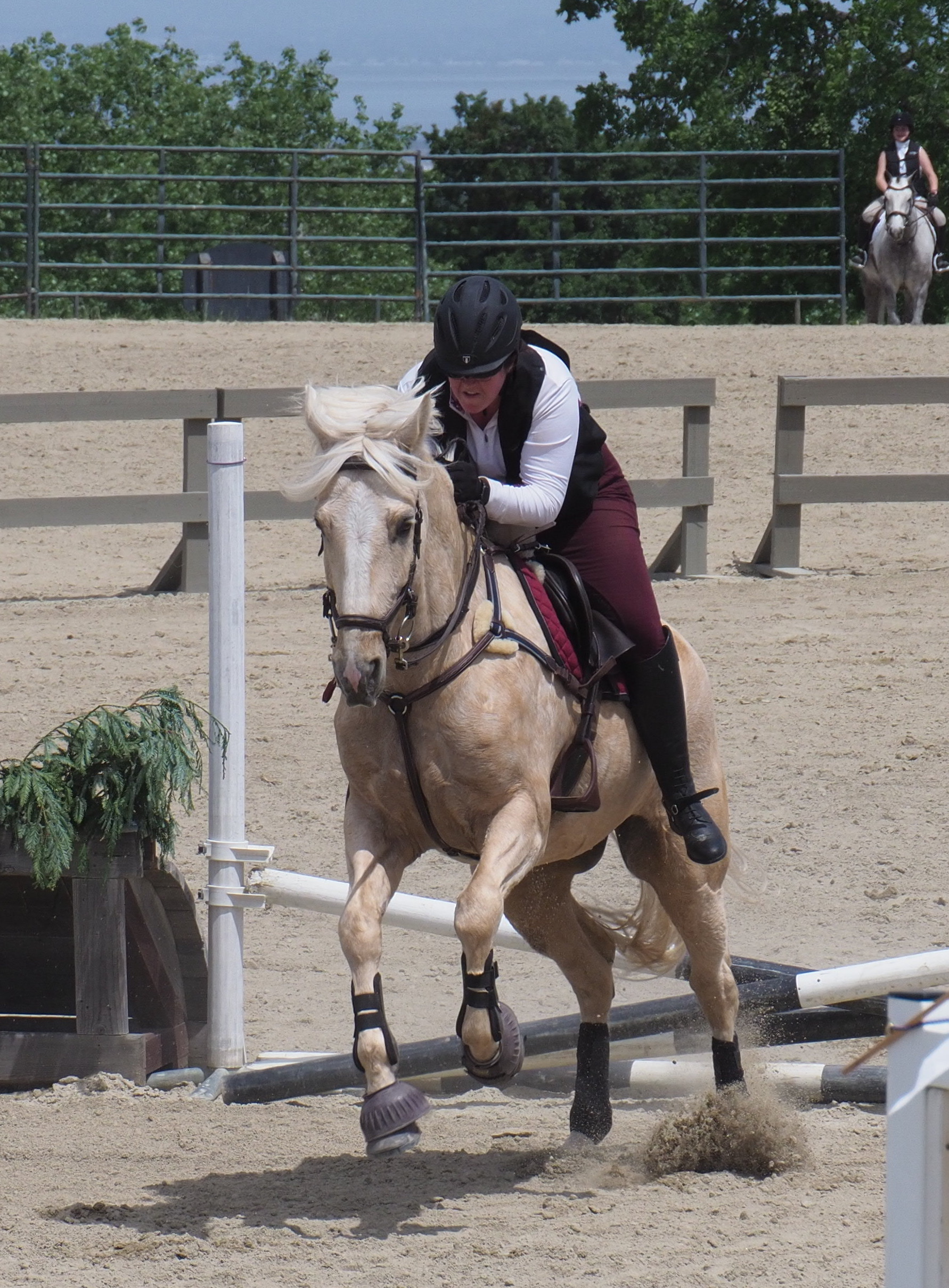 And accidentally caught him in the mouth when he moved forward and I didn’t. Because gravity was still moving me down and not forward. And neck straps are for decoration, not just this sort of occasion. 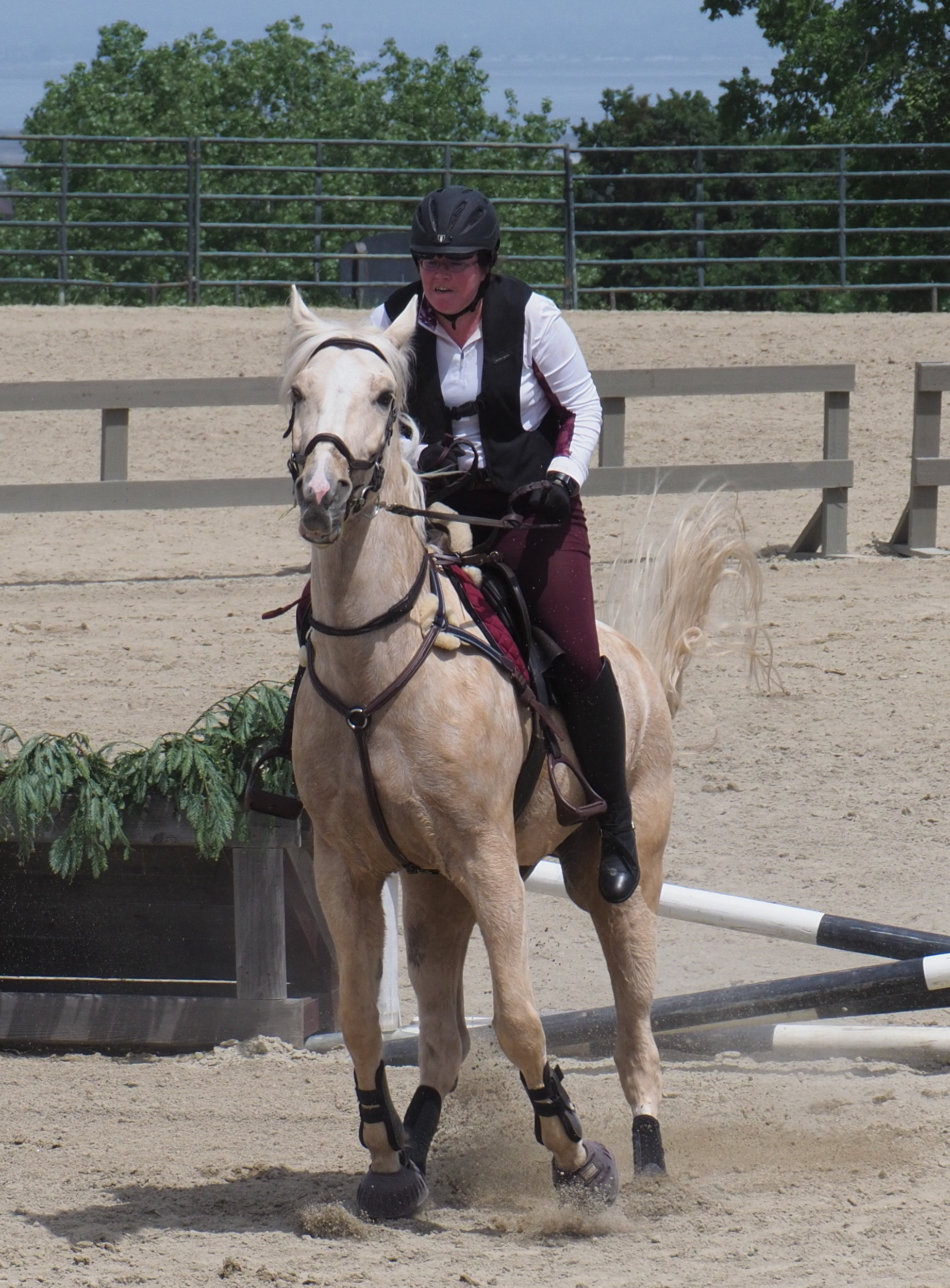 Levi was very offended by this state of affairs and decided to launch a little rodeo in protest. 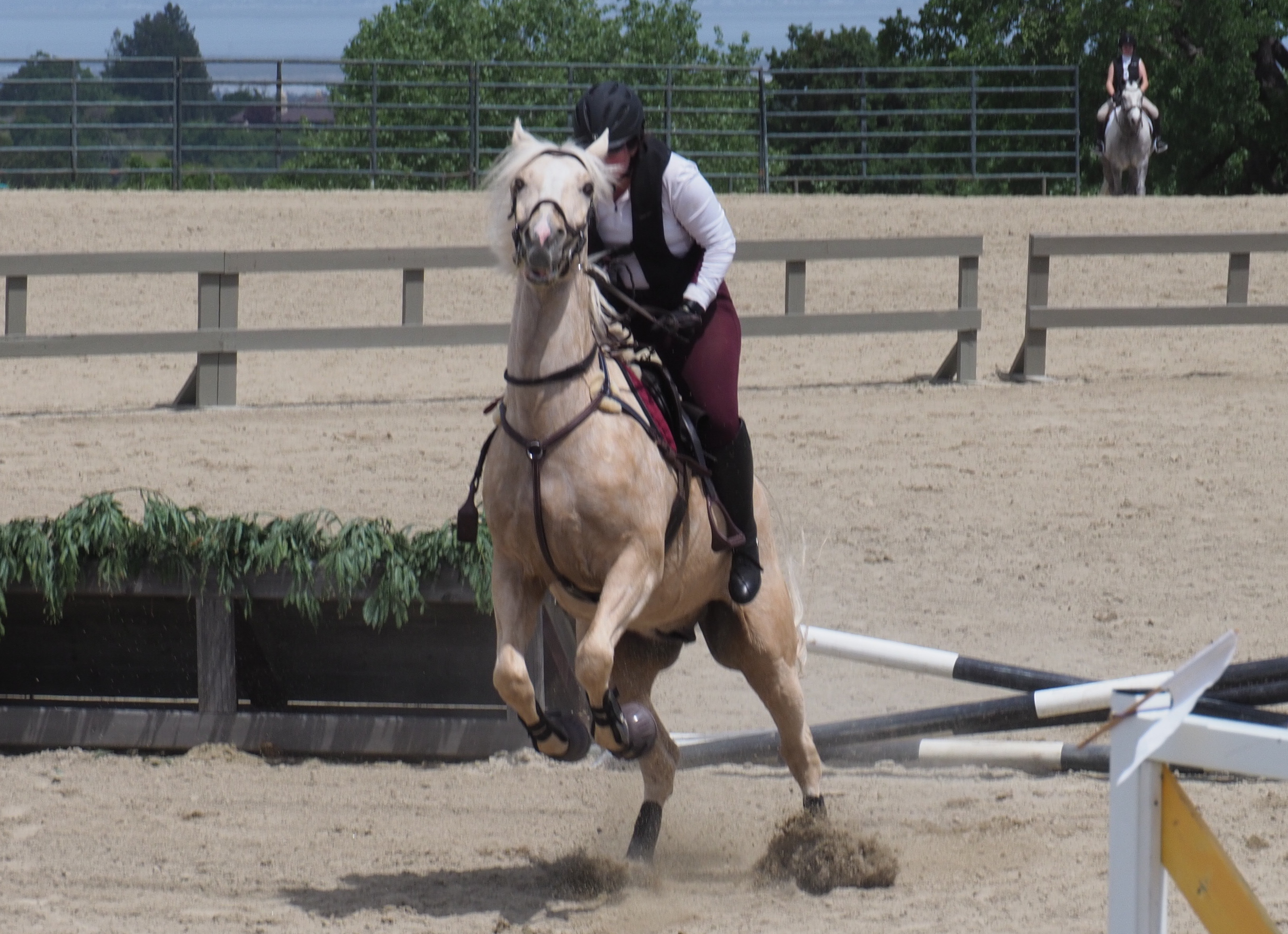 My husband stopped pressing the shutter button at that point, but don’t worry. I have video. Skip to 1:45 for the interesting part.

I don’t know how I stuck it, but I did. I could hear the gasps from the audience. I steered him into the fence to get him to stop, took a second to get my stirrups back and rearrange my reins, and then trotted off towards #6.

#6 was spectacularly awkward, because he learned nothing and still chipped in, but I was taking a backseat for it. At least one of us learned something. Not how to ride well- because that seems to be something that escapes me on a permanent basis – but how to be a lot more defensive. 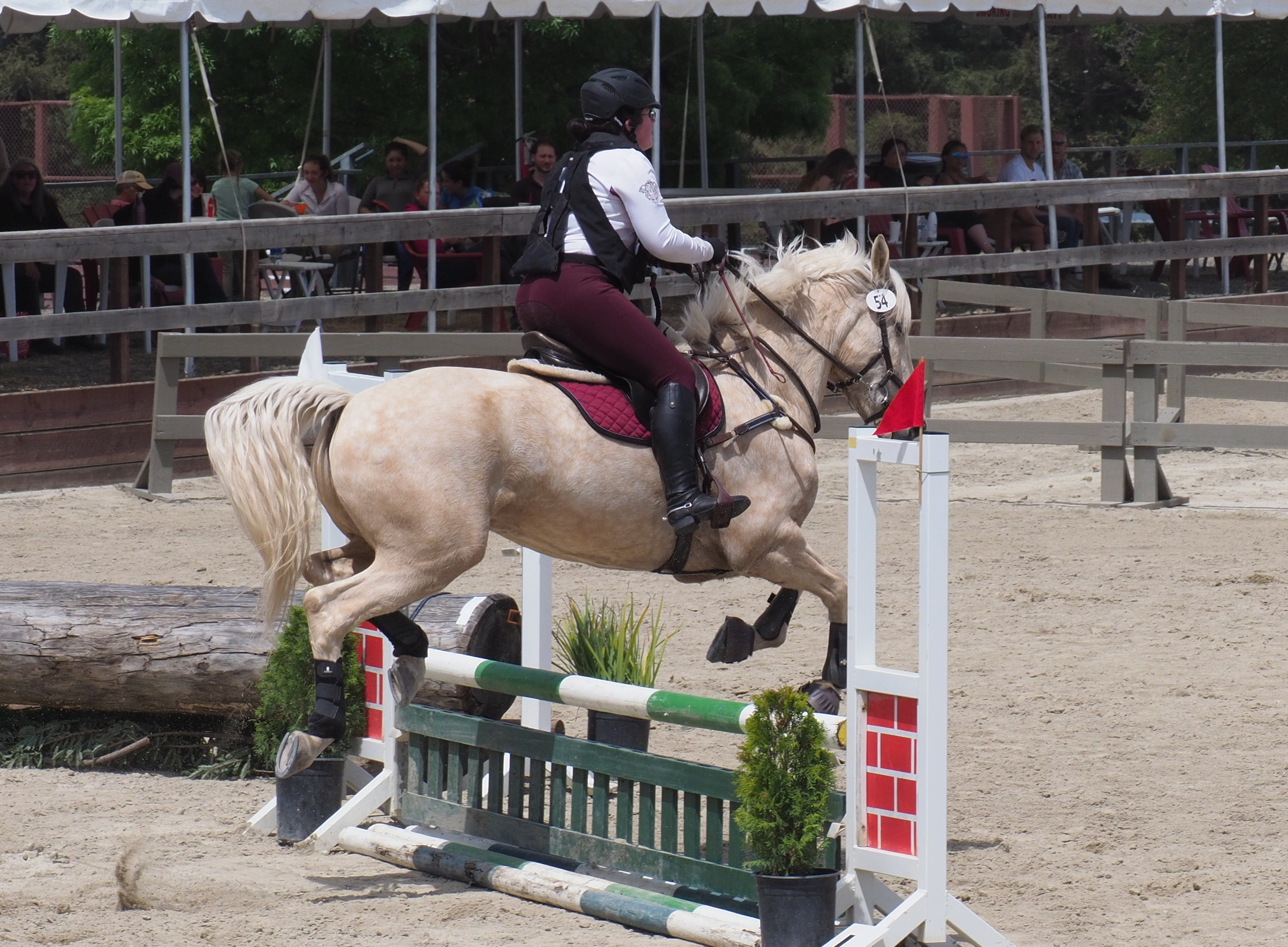 When he landed without any rodeoing, I went forward a bit more on #7 though I did sit back and wait for him to actually jump this time. Learning slowly is still learning. 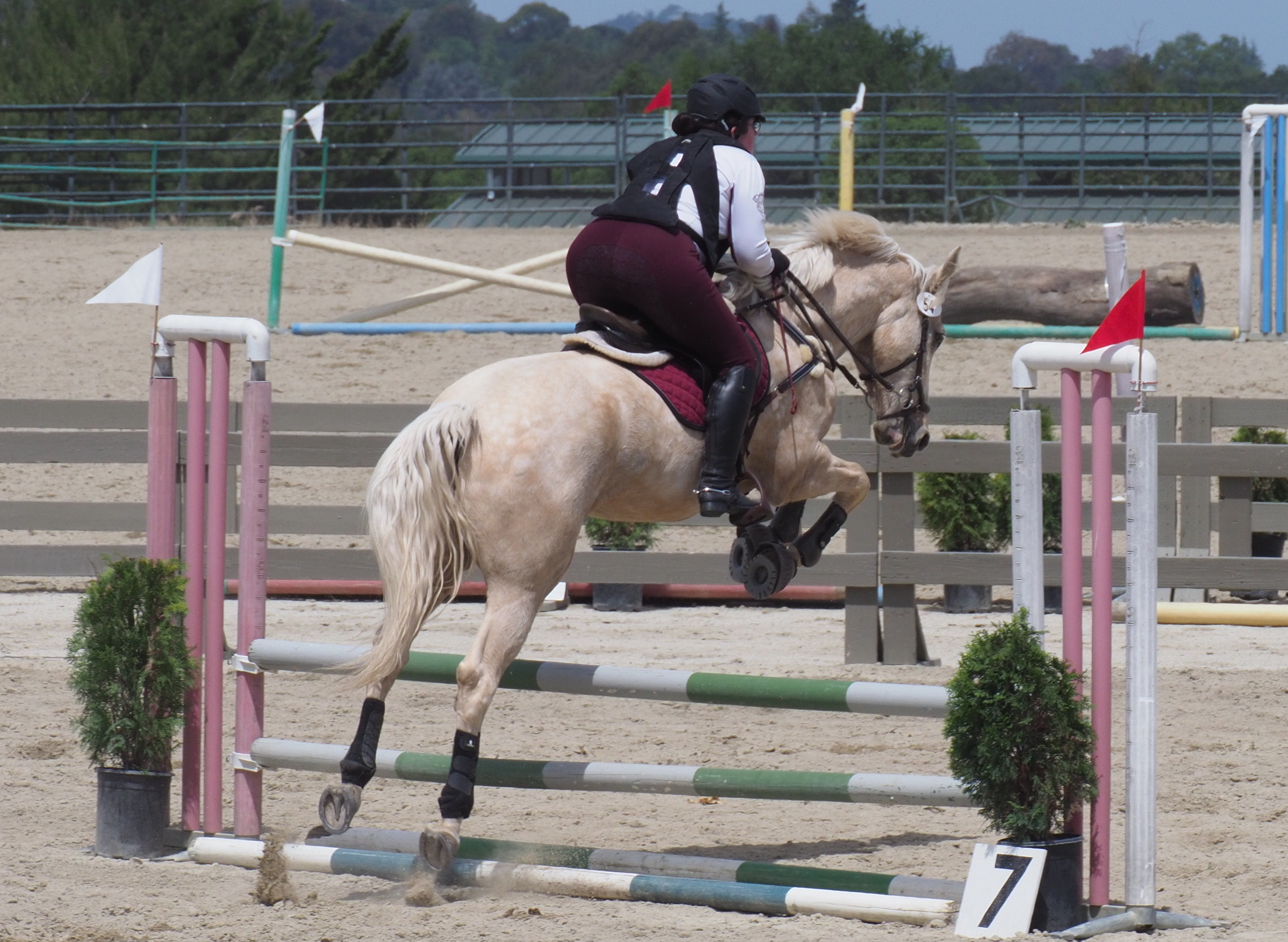 I got a little forward again to #8, but he was really just flying over the jumps by that point. 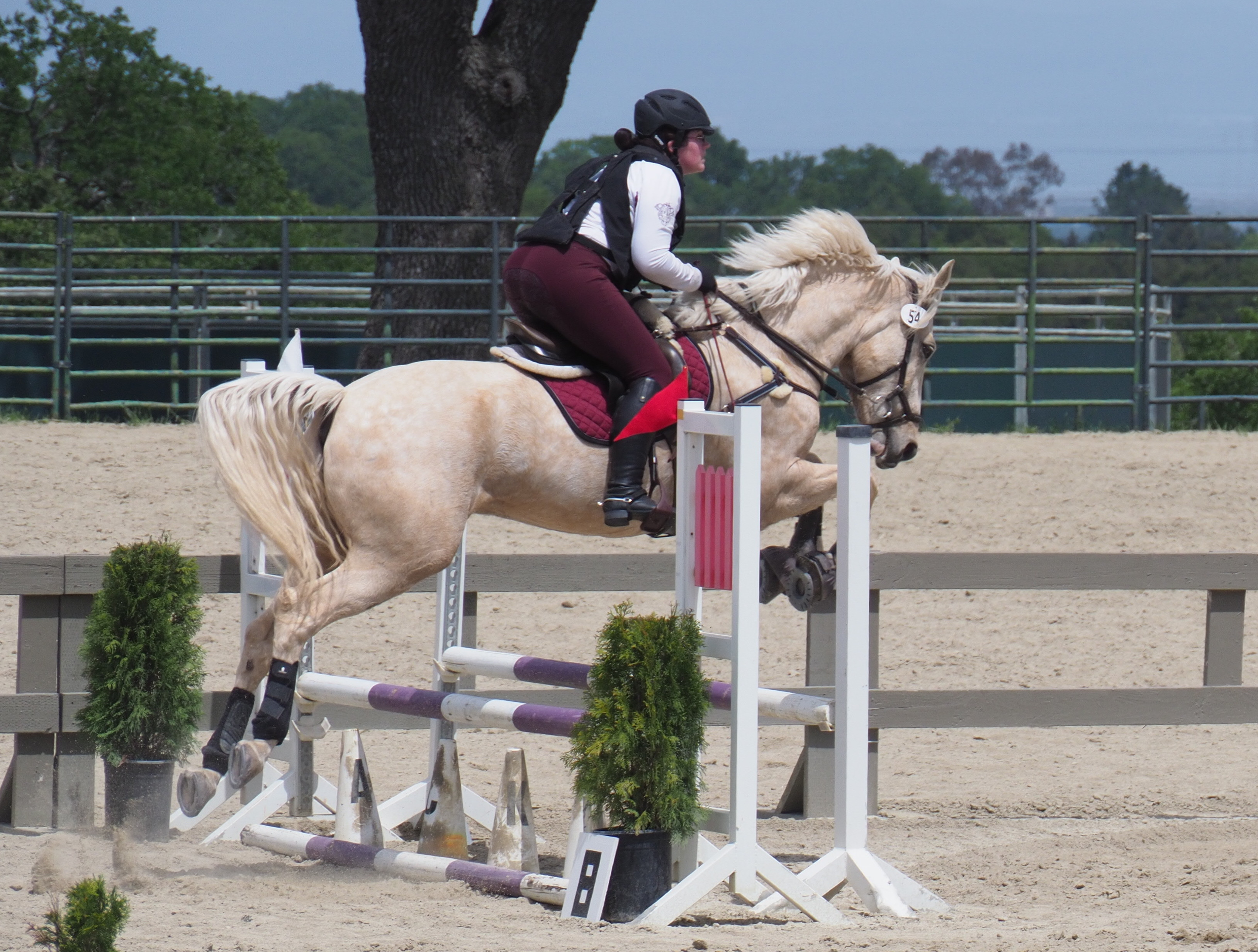 Despite the “issue” at #5, I decided to still go for the solid obstacle at #9. Levi was really moving forward and jumping well underneath me. The line for the XC jump was much better than the stadium jump which ran you straight into the judge’s booth (you can see it in the video). He dropped his head a bit to look at it, but he jumped without a pause. 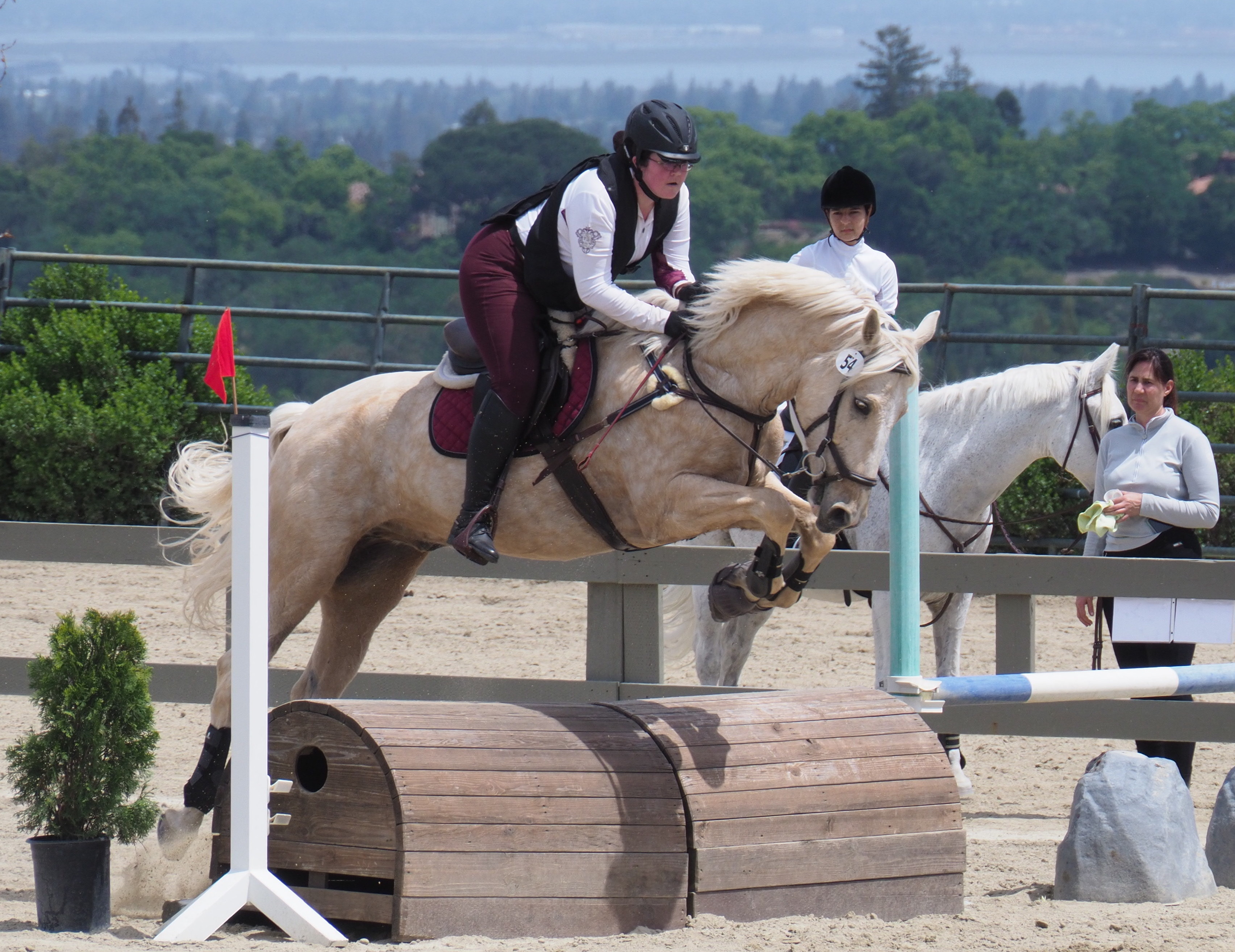 I stuck to my plan of not jumping the novice cabin. It was really on the edge of being BN height, but I’m a wimp and I had already survived one near death experience. I feel like I’m allowed to limit myself to one per day. He ended up finding the gate so ominous he jumped higher than the cabin anyway. 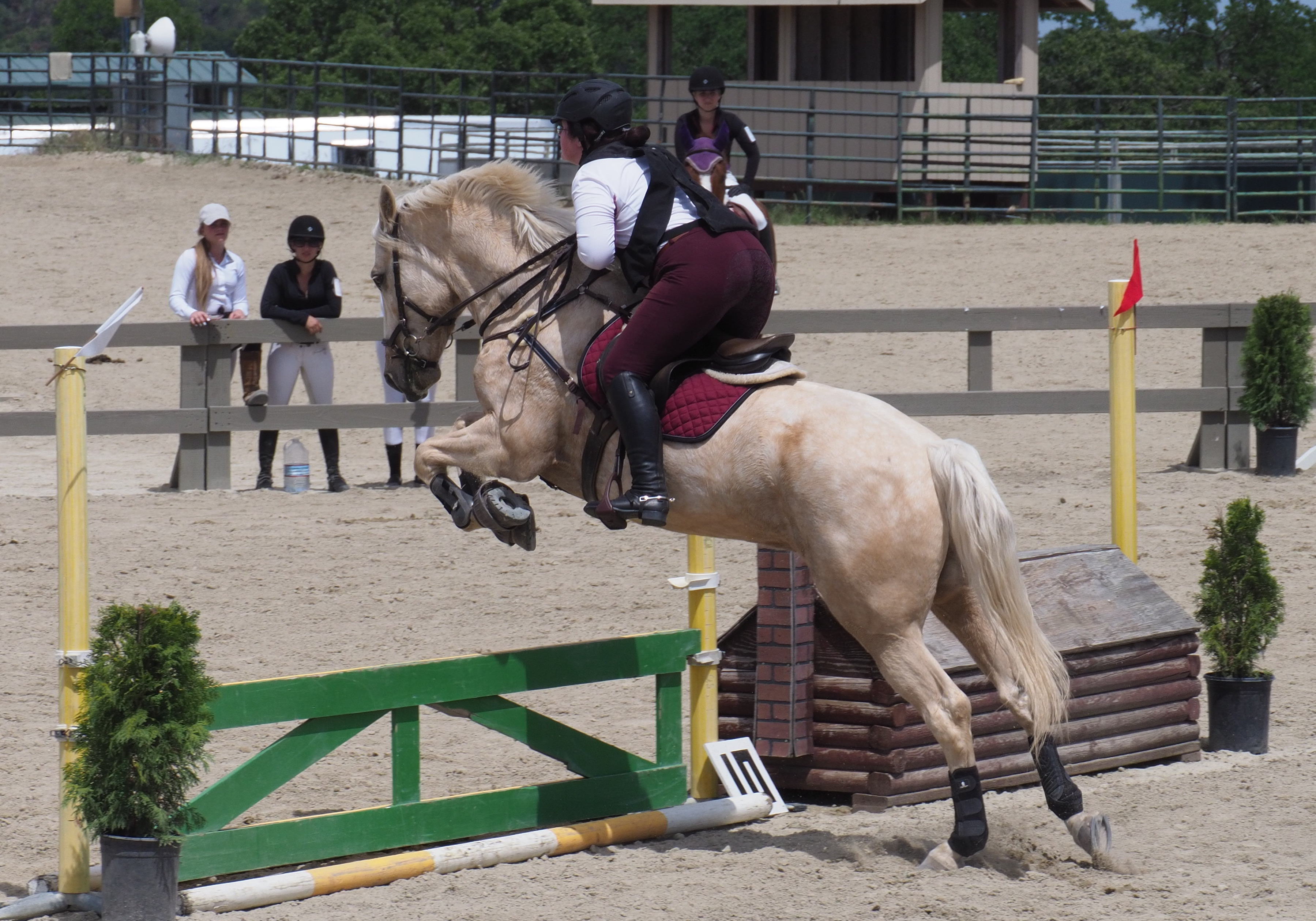 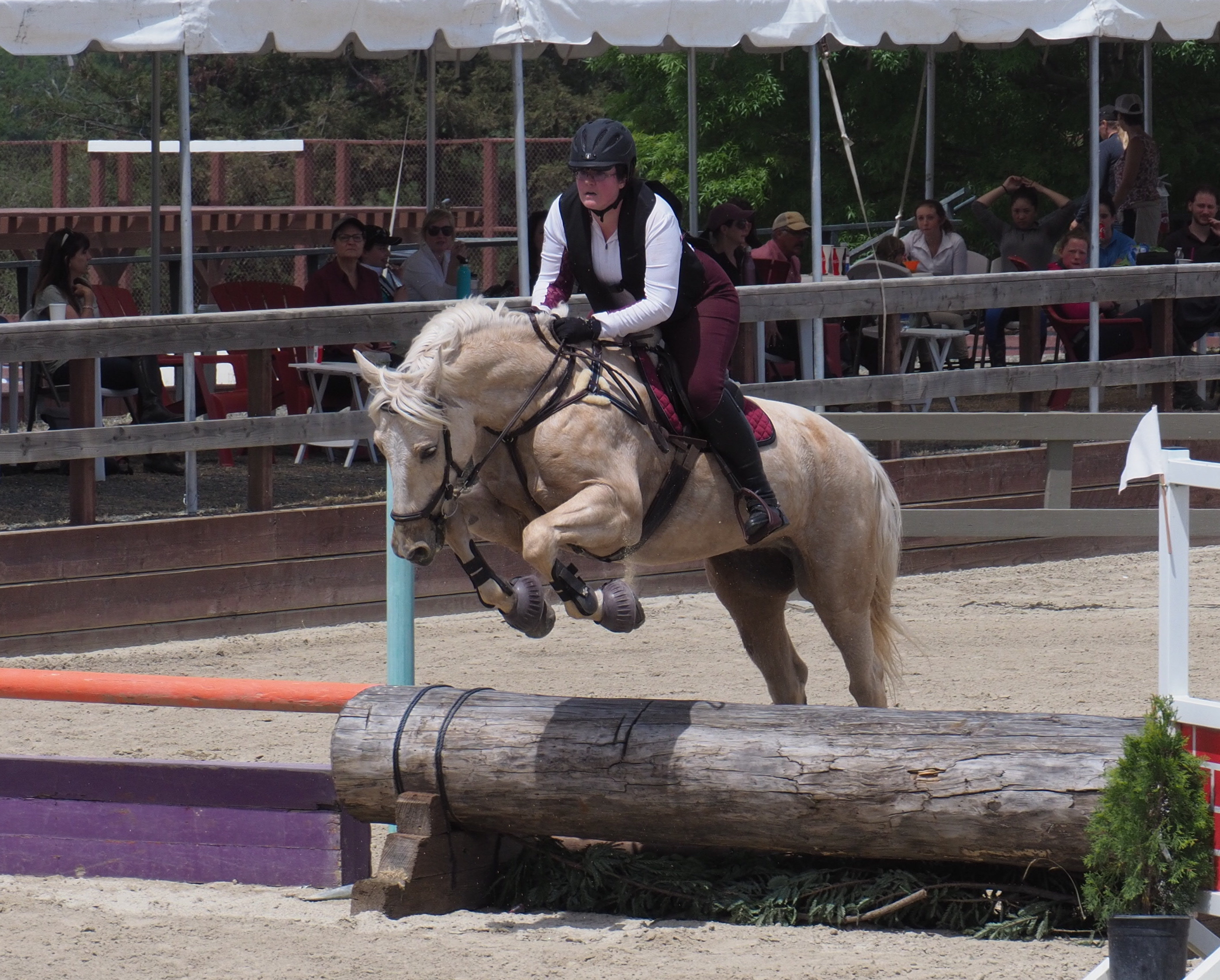 And finally we were down the long side and over the last jump at #12. 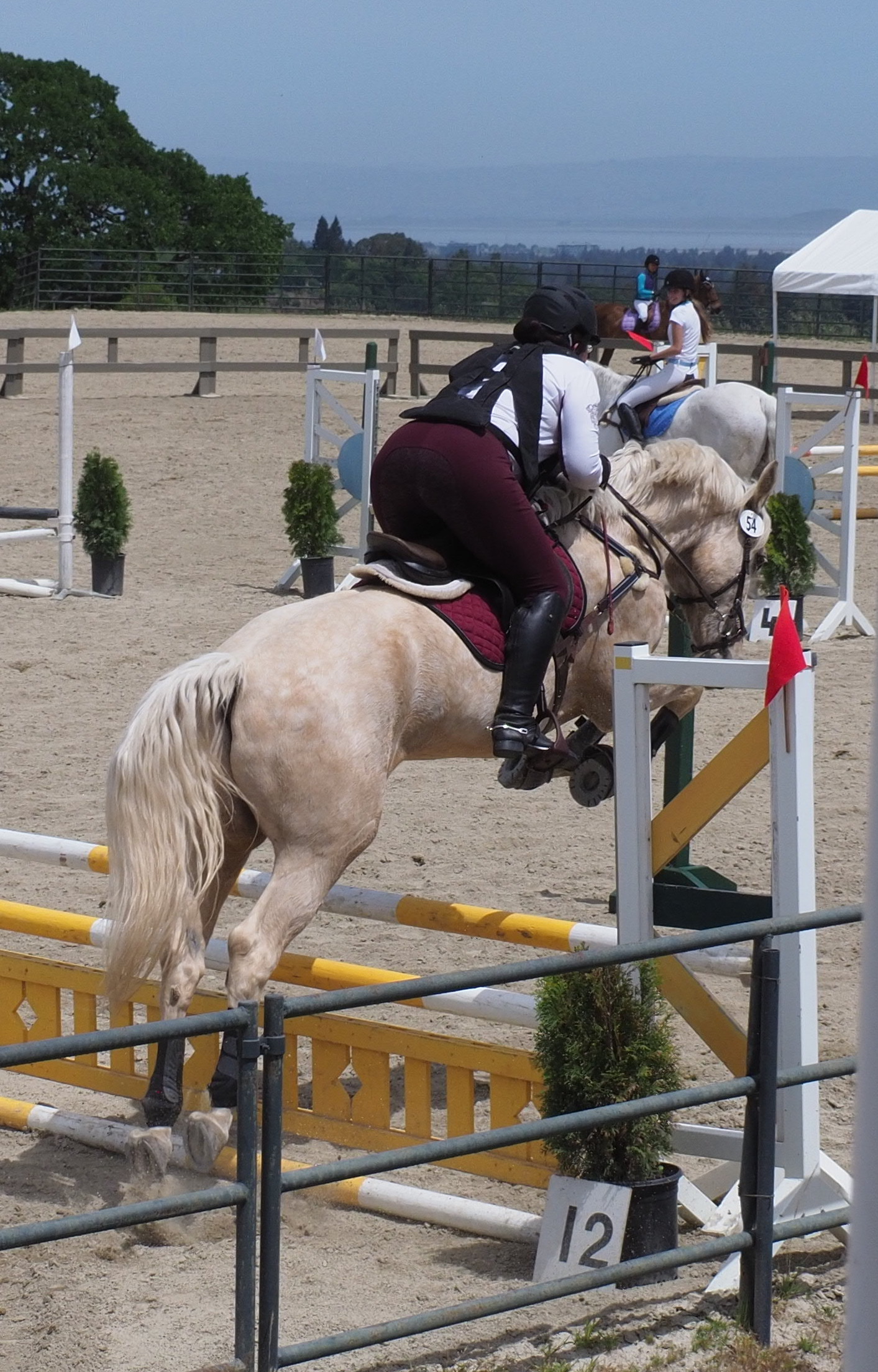 Thank Cod we were done. Despite pausing, we were somehow still under time and only racked up 4 points for knocking the rail at #5. As we were leaving the arena, the girl waiting congratulated me on my good riding and I thanked her and said at least we’re alive. She laughed and said that was her goal too. It’s a good goal.

I dunno, maybe I should take up science. Or cake baking.