I generally don’t post about my dogs on this blog – which is odd since I post about chickens and turkeys and other random animals – but everyone seemed much more interested in seeing pictures of our new puppy than in hearing about our Hitching Post HT experience. Honestly, I don’t blame you. Puppy pictures are the best. The problem is, I have very few good pictures… because this puppy never stops moving. 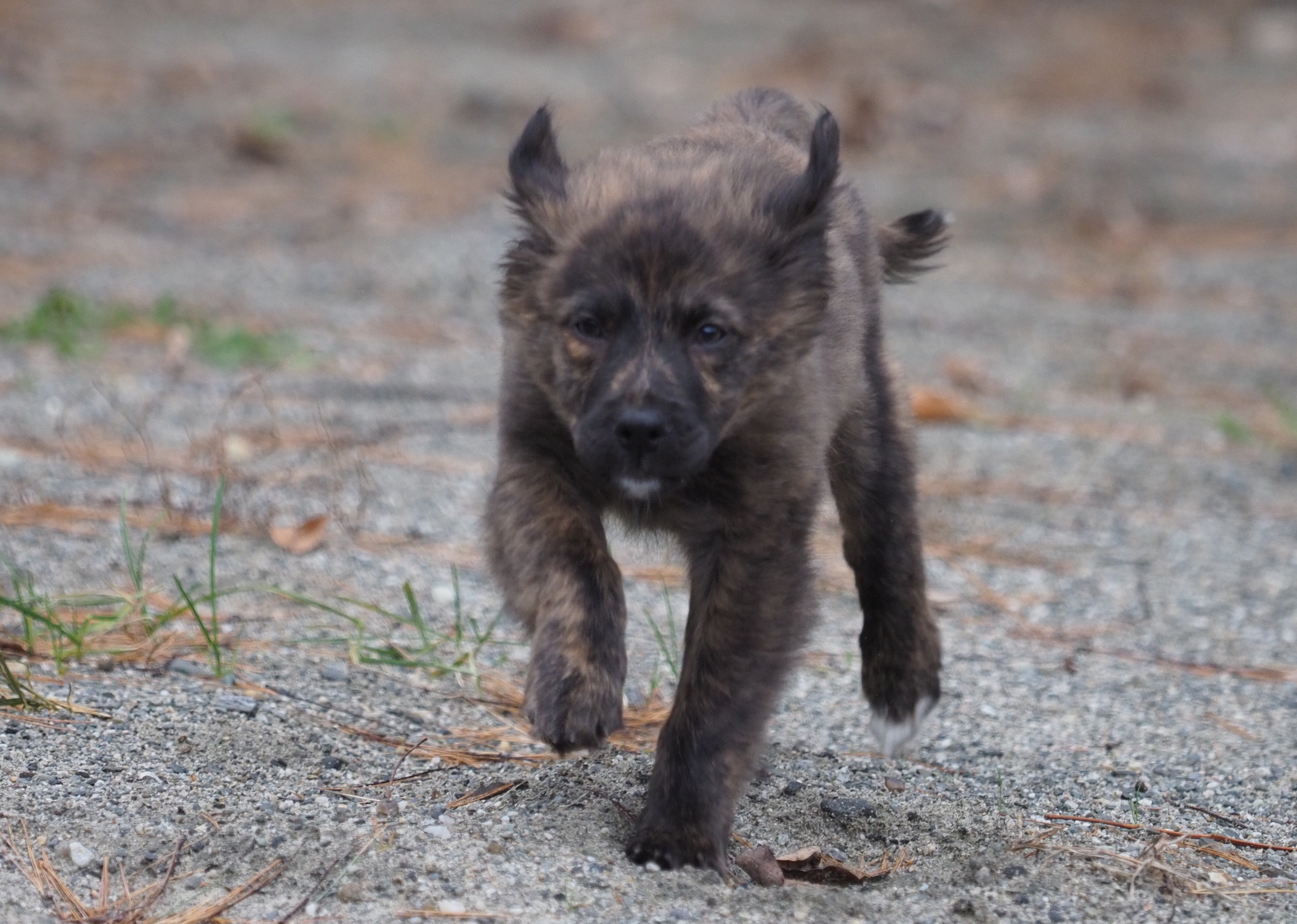 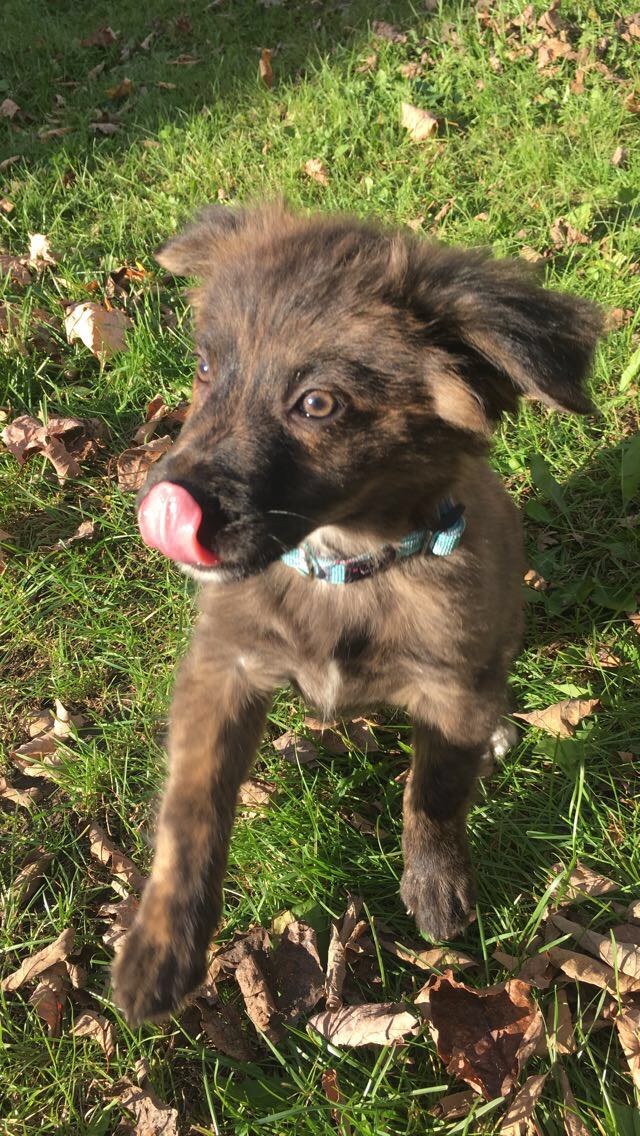 We have no idea what breed(s) she is. She came up to Vermont from a rescue in the south. The rescue didn’t know what breed she was either. I’ve volunteered with rescues in the past, worked as a dog walker and a therapy dog trainer, and spent years as a kid pouring over breed books. All that and I have no idea what breed this dog is.  I’m not sure she is a dog. I think she might just be a ball of fluff come to life. 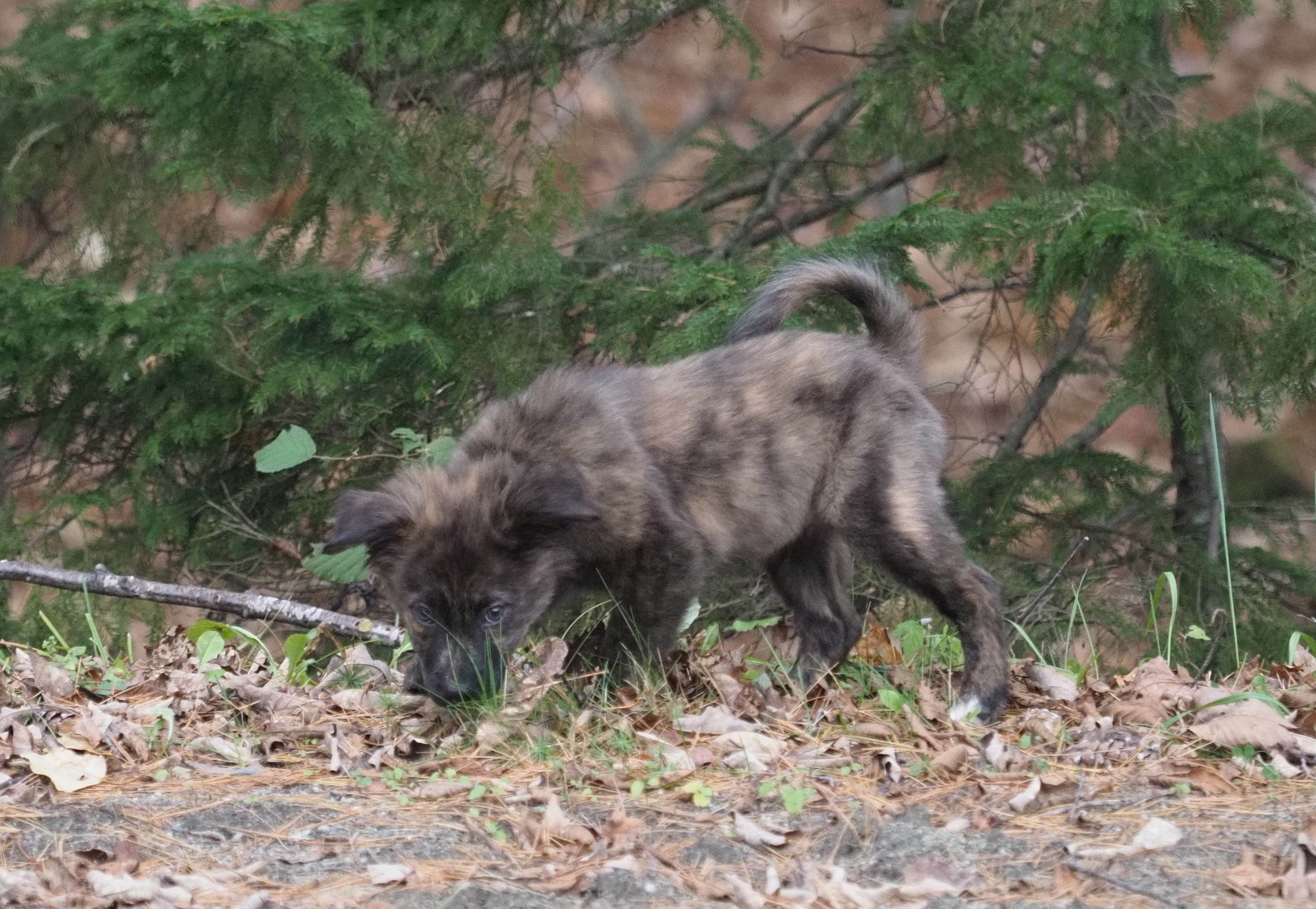 The fluff stalks the leaves

I’m not sure how big she’ll get, but she was 8 lbs at 12 weeks and was very underweight (she was bony and malnourished underneath all that fluff). She probably should have been 10 lbs at that time. She’s putting on weight and doing much better now that we got her stomach issues cleared up (minor puppy parasite) and are feeding her quality puppy food.

Is this not insanely cute?

She absolutely LOVED getting her medicine. She’d start bouncing and begging for it as soon as I got the syringe out. I wonder if she was bottle fed – apparently her mom died – and that’s why she loved the syringe. That or the medicine just tasted really good? I dunno, but I wish my horses were this easy to worm. 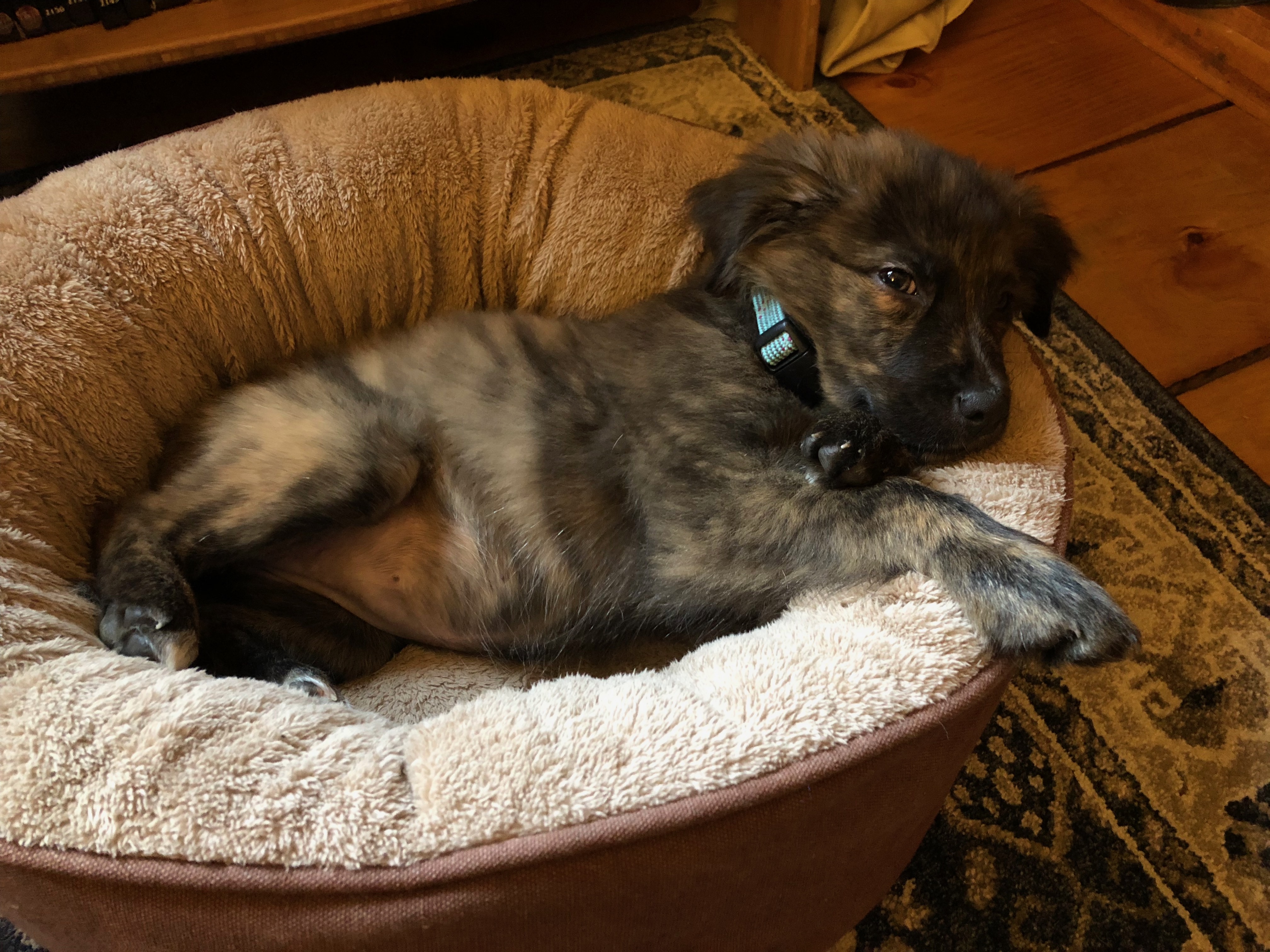 Most of the pictures I have of her are of her sleeping because she’s either a bouncing ball of energy and whirling dervish of destruction that’s impossible to get in focus on a camera or she’s conked out. 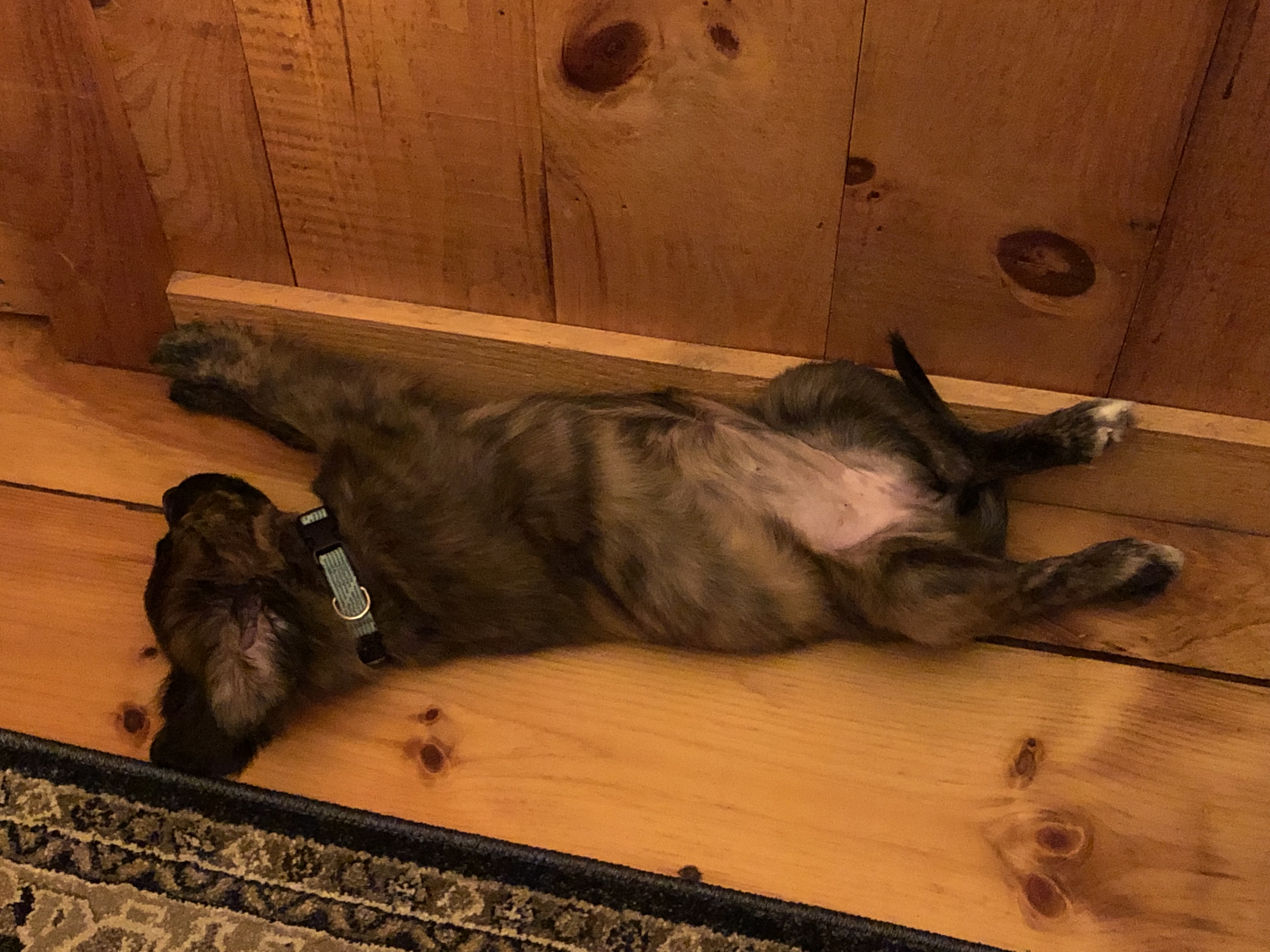 She likes to sleep upside down tough and it’s adorable. My other two dogs initially hated her. The one has gotten over it and is now playing with her/tolerating her. The other was initially terrified of her and has progressed to just hating her. Here’s Sky and Cora playing and Ceili coming in to tell them to knock that sh*t off.

I’ve been taking Skye into town to get her some exposure as she’s a very shy puppy who clearly didn’t get to see much of the world outside of her foster home and is terrified of new places and people. I wish I could have gotten her a bit younger to start the exposure earlier and I wish we didn’t live in the middle of nowhere so she could get even more, but we’re doing what we can. She starts puppy obedience class tomorrow and I am looking forward to getting her exposure to other dogs and people there too.

Feel free to jump in with breed guesses in the comments. I’d love to know what you think she might be. I have sent away for a DNA test, but apparently it takes 2-3 weeks to process. Do they not understand that I need instant gratification? 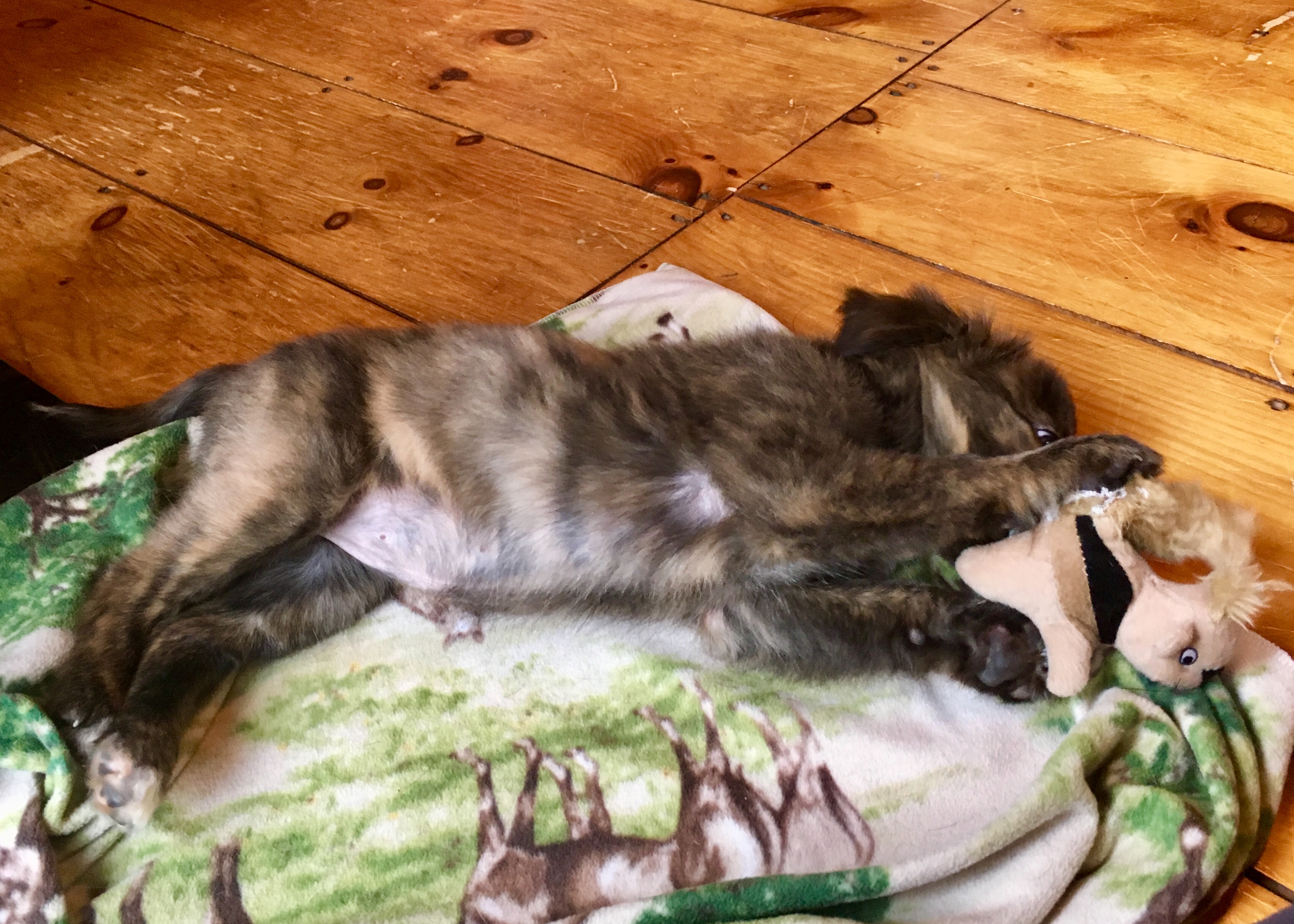