The struggle bus is real, y’all, and we are on it. 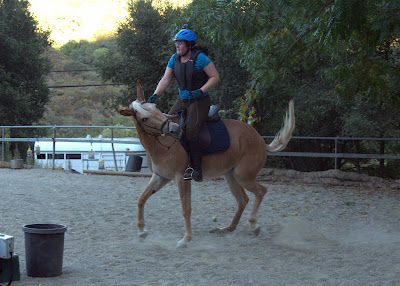 On Wednesday, I woke up feeling sick. I went to work figuring it would go away, but it only got worse. I ended up going home and working from home for the afternoon. As Wednesday was my birthday, everyone kept asking me what fun thing I was doing and my answer was laying on my couch battling nausea.

Of course, I still dragged myself to the barn for my lesson. If breaking a leg or having simultaneous bronchitis and pneumonia didn’t keep me from riding, the stomach flu certainly wasn’t going to.

I normally lunge Nilla before lessons. She doesn’t need it from an energy perspective, but it helps her get warmed up and loosened up. Lessons are expensive, so I’d rather have her ready to go when the trainer arrives than spend valuable training time on warming up. Being sick though, I skipped the lunge. I crawled aboard Nilla about 2 minutes before the trainer arrived and she proceeded to take off across the arena and then spook at the pony-cart that had been parked nearby. She did calm down when we went up to the upper arena, but a lunge may actually have been helpful for her mental state.

The trainer has also decided that Nilla is past the baby stages and we need to start upping the game. She’s not a 3 year old, so she can physically handle the increased work, she just needs to mentally handle it.

So far, we’ve been working on a getting her on the bit and getting her to bend, but we haven’t really been asking her to engage her inside hind leg. Now we’re asking that she step up, step in, and start working. And this is really hard for her. If you look really closely at the picture above, you’ll note that my inside rein is completely slack. I’m not actually pulling her into this position. She has yanked the outside rein forward and pulled my outside arm forward causing me to twist my upper body so it looks like my inside arm is pulling, but really it’s not. She was just having a temper tantrum. 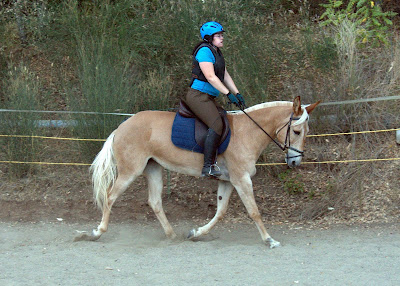 Most of the ride looked like the above. It’s not super engaged, but it’s not pretzel-twisting pissy-fits. We started asking her to engage the inside hind by asking her to move her haunches away from my leg. Basically, the beginnings of shoulder-in. Which she was entirely resistant to. We did a ton of spiral-in and out and work on a circle, continuously asking her to move her damned ass off of my leg.

You know what’s awesome when even standing still makes you sick? Circles. And spirals.

There were moments of freaking out, but there were also moments where she got it. 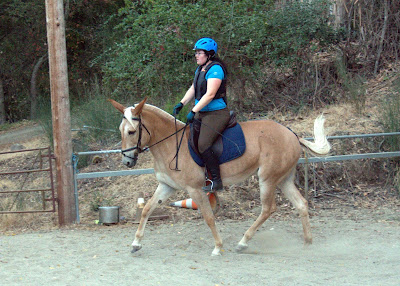 Look at that inside hind stepping under her belly. And look at her stomach muscle actually lifting her back; you can see the muscle line where she’s engaging and lifting her core. Bonus inside ear focused on me. This is now our homework.

Then we went to canter work. I’ve been letting her just drift into canter and not stay connected. Canter is hard enough for her so I’ve been making it as easy as possible. And this goes back to the trainer’s belief that we need to start asking her to work harder. She can canter and stay on the bit.

Like I said, pissy. We started asking for transitions only through shoulder yielding. Which is actually something Laura had me doing with trot transitions months ago, but I hadn’t thought to apply the idea to canter. I should have, but again, I was really only trying to get her to canter at all, not ask her to do it well. 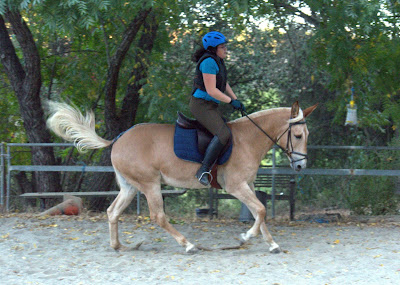 Despite some theatrics, we got some excellent canter work. The trainer said it was the best she’s ever scene from us. It felt pretty good too. We even made it in whole circles without breaking. Not every time, but we did manage it a few times. 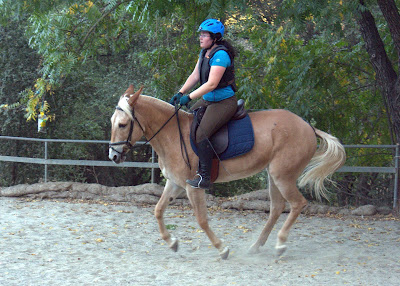 This final (blurry) picture from the end of the ride shows just how much Nilla is improving. I’m reaching down to pet her (with the wrong hand because I can never remember to only use the inside hand) and she’s still stepping under with her hind and staying nearly on the vertical even though the reins are slack. Engagement, it’s a powerful thing. 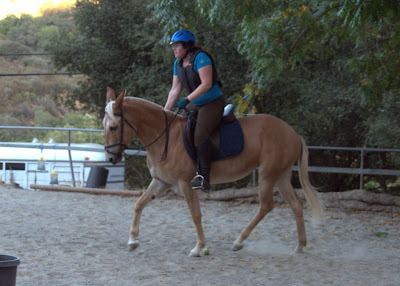 As we were riding, there’d be moments where I’d make an adjustment or get after Nilla for something before the trainer could even comment on it. So she kept telling my husband what a good rider I am. Which I could hear because they weren’t that far away. After the lesson he was telling me this, and I said, yeah, I used to be a good rider. It’s nice to hear, but I don’t feel like I am a great rider anymore. I do feel like I’m getting better and it is nice to have trainers compliment me.

When I mention to non equestrians that I have a lesson they always ask, “don’t you already know how to ride?” I’m sure every adult rider has had this conversation. But this is why I have lessons. I want to get better.

We’re on the struggle bus, but I think it’s going somewhere good.