I love my barn. I know I’ve mentioned it before, but the other night was a great example of why. The two teenagers who have horses at our barn are off to college so the barn owner threw a big party. The girls have been riding there since they were little kids. The barn used to run a lot of different camps and riding programs for kids so they had tons of pictures of the girls as little kids riding and playing with llamas and snakes and chickens and such. There was a slide show running on a TV in the background.

There was also a Trivia/Reminiscence round with the girls and others sharing their favorite memories of their time at the barn. As people were going around sharing stories like their favorite time at camp being the time they helped the shy kid come out of their shell or the time they rode one of the now retired ponies for the first time, I thought, wow I lucked out.

I have spent most of my life not fitting in at the barn I ride at. I grew up riding at the type of place that winters in Ocala. I worked alongside the paid help to get extra rides. To say I didn’t fit in with the rest of the girls is an understatement or drastic proportions.

When I played polo in college, our team was massively underfunded/not funded. We literally bake-saled our way through the year. After we played one game where we duct-taped numbers onto our shirts, we bought used jerseys from the lacrosse team. I had a boot that was duct-taped together and the duct-tape fell off during a game. The ref had to go pick it up and asked whose it was. We played against school like Yale, whose horses were donated by Tommy Lee Jones and company. Fortunately, the team I was on was all poor so at least we got along with each other.

There are many times when I think about how nice it would be to board at a fancy training barn. Especially one with an indoor arena. And electricity. I’d love to have paid help to clean and feed so I don’t have to. A resident trainer would be nice as well. When I have to go to shows and I have no idea what I’m doing, I really wish I was part of a proper barn.

But I love my barn. Everyone gets together and shares stories about being together and helping each other. Not stories about the time their horse was worth more than all the other horses or had won more ribbons (things kids really bragged about at a previous barn). There’s truly a sense of community. It’s really nice to know everyone and get along with everyone. It doesn’t matter what kind of breeches you wear or how fancy your horse is.

Plus, there’s like a thousand baby salamanders living in a giant salamander carpet under the  paddle board by the lake. 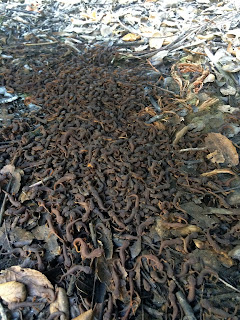 Who wouldn’t want to board here?