It was over 100 degrees today. The sort of heat that makes you feel like you’re being baked inside an oven. So hot I considered cancelled my lesson. Especially as I haven’t ridden once since last week’s lesson due to a combination of illness, heat, and prior commitments.

Nilla is on team Stark though and is preparing for winter. Her winter coat has starting coming in already. I just noticed it today. I plan to shave her ASAP. 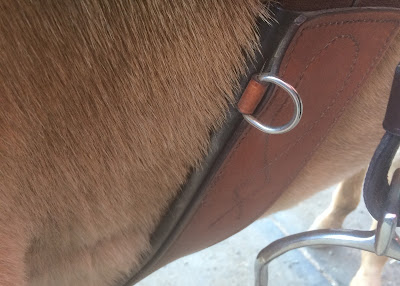 Look at all that hair! Did I mention it was over 100 degree today? I don’t know what she’s thinking growing this coat. I know that the change in daylight is what actually triggers coat changes, but Shasta and Dijon are not this hairy. Luckily (maybe?), she didn’t get a chance to bake to death in her pre-winter coat though because she was lame.

I thought she looked a bit pokey when I was lunging her, but it was so hot I only had about 5 minutes to lunge before the trainer got there. Then we had to have a major fight about going up the hill to the arena. Nilla was convinced she would not go up the hill and kept backing up so I just turned her around and we backed up the road for a ways. I finally got her going in a forward fashion though. I think we’re going to need to have a real come-to-jesus training session on this behavior.

We started the lesson with some gossiping. Apparently the crazy trailer story leaser is suing the owner claiming she was injured trying to get the horse on the trailer. The owner called to tell us she’s crazy and not to let her on the property.

While we were gossiping the trainer pointed out that Nilla’s left hind was swollen and I said, it’s always swollen. This is the leg she bashed in a trailer months ago. It’s never caused any lameness, but the swelling has never fully disappeared. Then we did some walk work to get Nilla bending and on the bit.

When we finally picked up trot, the trainer thought she looked off. I trotted her around a bit. It was like a 1/5 lameness. Trainer asked if I wanted to push through or give her time off and I opted for time off. I need her sound for the Horse Trial at the end of the month and the 25 in October. I sent the entries in yesterday so I’m pretty sure that’s what jinxed me.

I took her down, poulticed and wrapped her leg, gave her some bute and put her away. We’ll have to see how she looks tomorrow.

On the plus side, this happened: 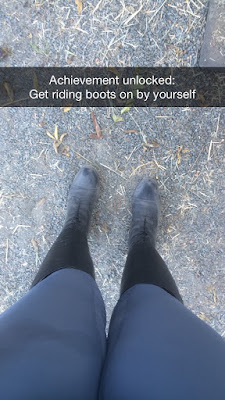 Is anyone else’s horse growing a winter coat?

6 thoughts on “Winter Is Coming”