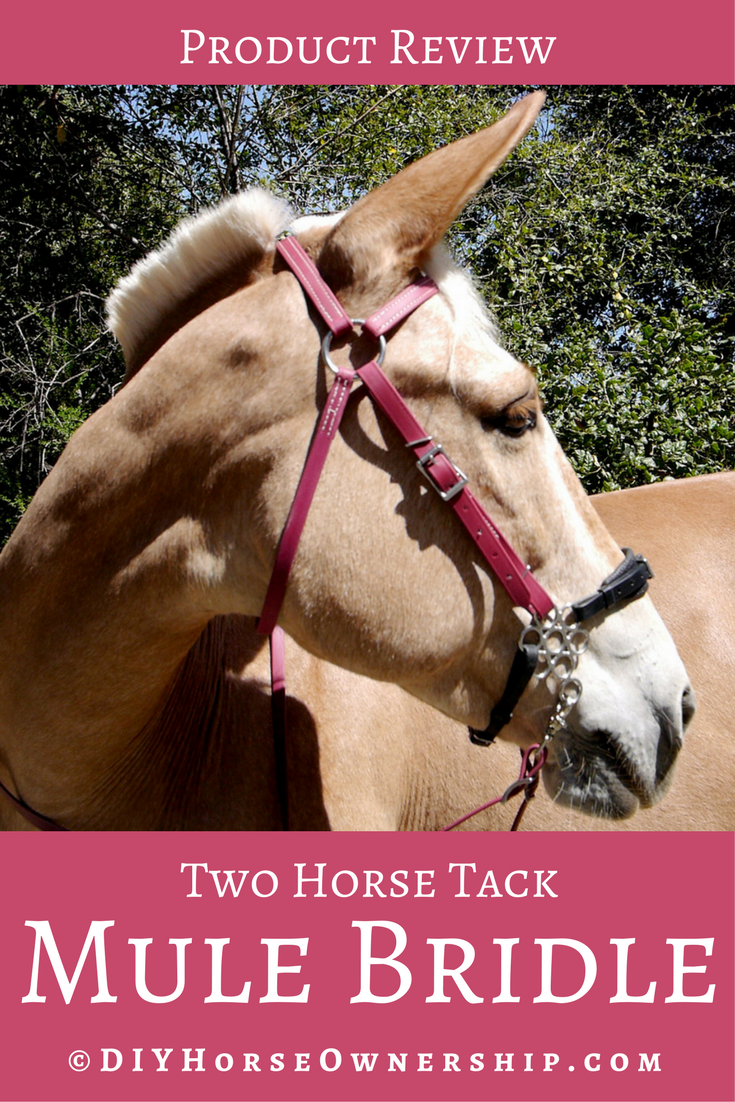 Two Horse Tack contacted me a month ago asking if I wanted to try their mule bridle. I was all for it. I actually already own some Two Horse Tack Products that I purchased. Normally I would wait longer before doing a review, but I’ve had a bitless bridle from them for a few years now and it’s still in great shape so I think I can speak to the long-term reliability of the product without waiting months to finish the review. 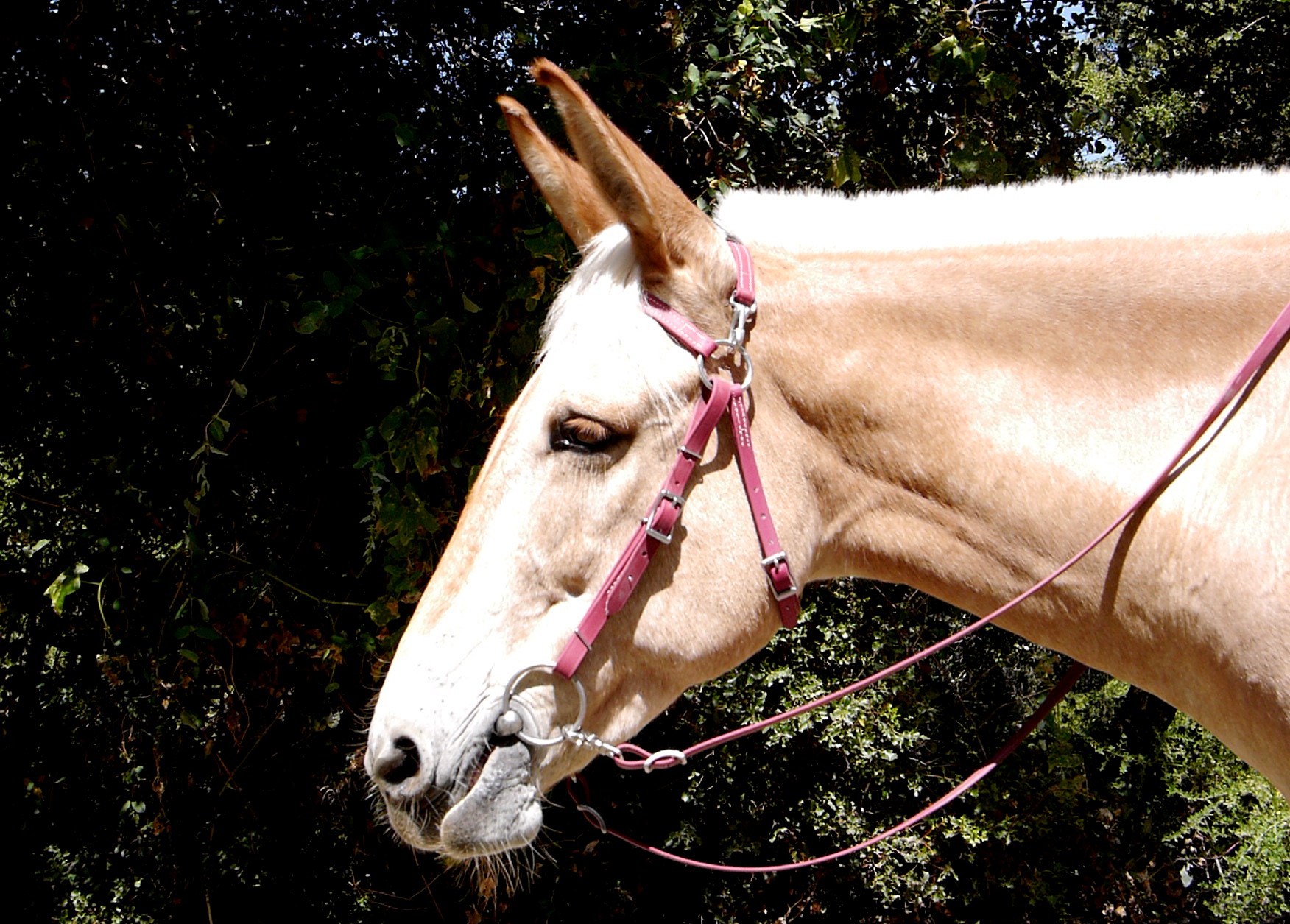 The Two Horse Tack Mule Bridle is ideal for mule or ear shy horses.  The crown piece comes with a snap which allows you to tack up having to bend the equine’s ears. I know many mule owners and riders use similar bridles and I have seen similar bridles sold elsewhere although I don’t think I had ever heard of them before getting a mule. Thankfully, Nilla is very good about having her ears handled (in fact she would really like you to touch her ears as much as possible please). 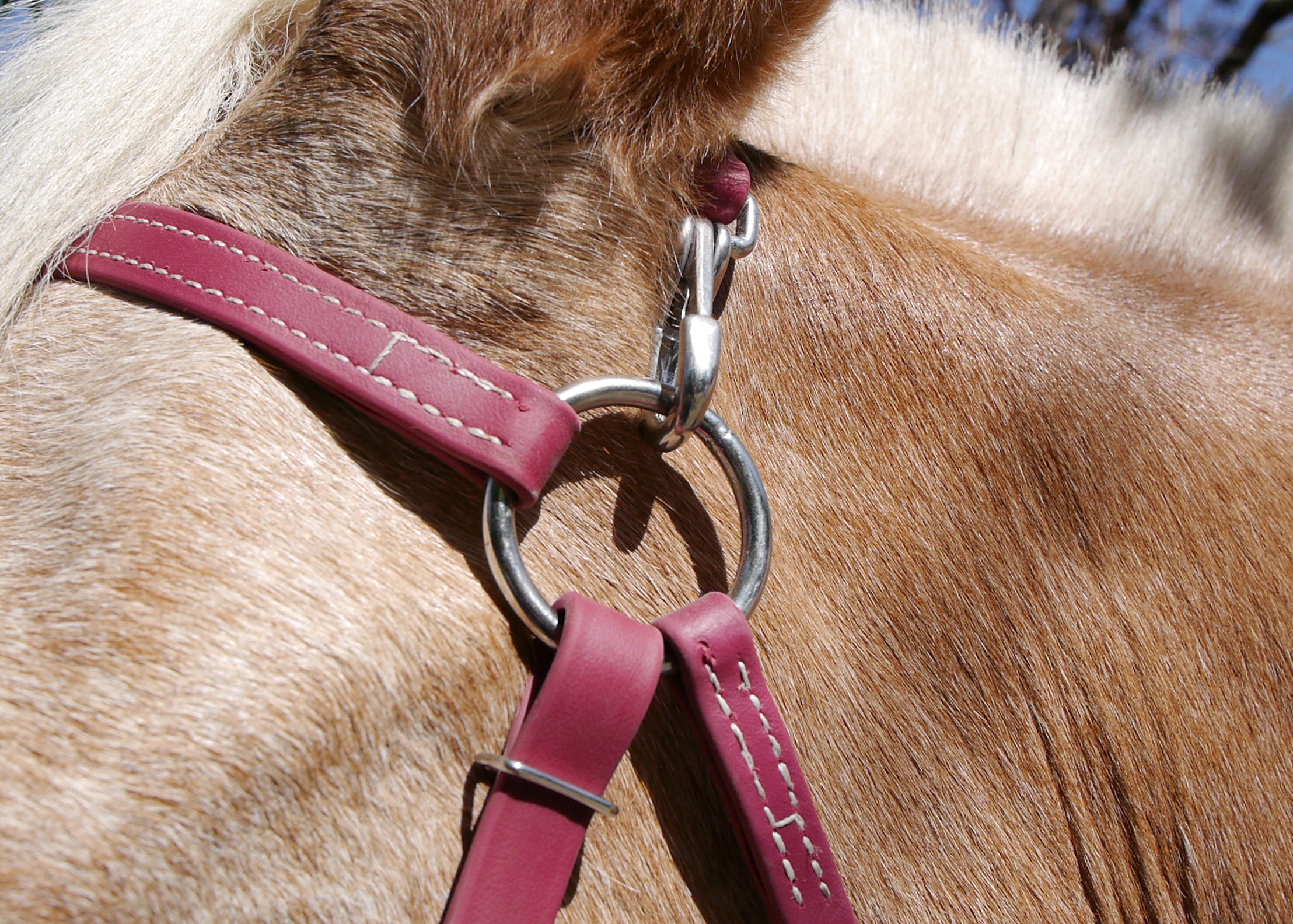 Levi, on the other hand, hates having his ears touched. When I first got him, touching his ears would result in him attempting to bite or strike at me. I have addressed that issue and I can now touch his ears, but he still hates it; he has just learned that he has to behave anyway. So when Two Horse Tack asked me to try the bridle, I requested it in Levi’s color. Despite their massive height difference, Nilla and Levi actually wear the same size bridle so I knew I could use it on both of them. 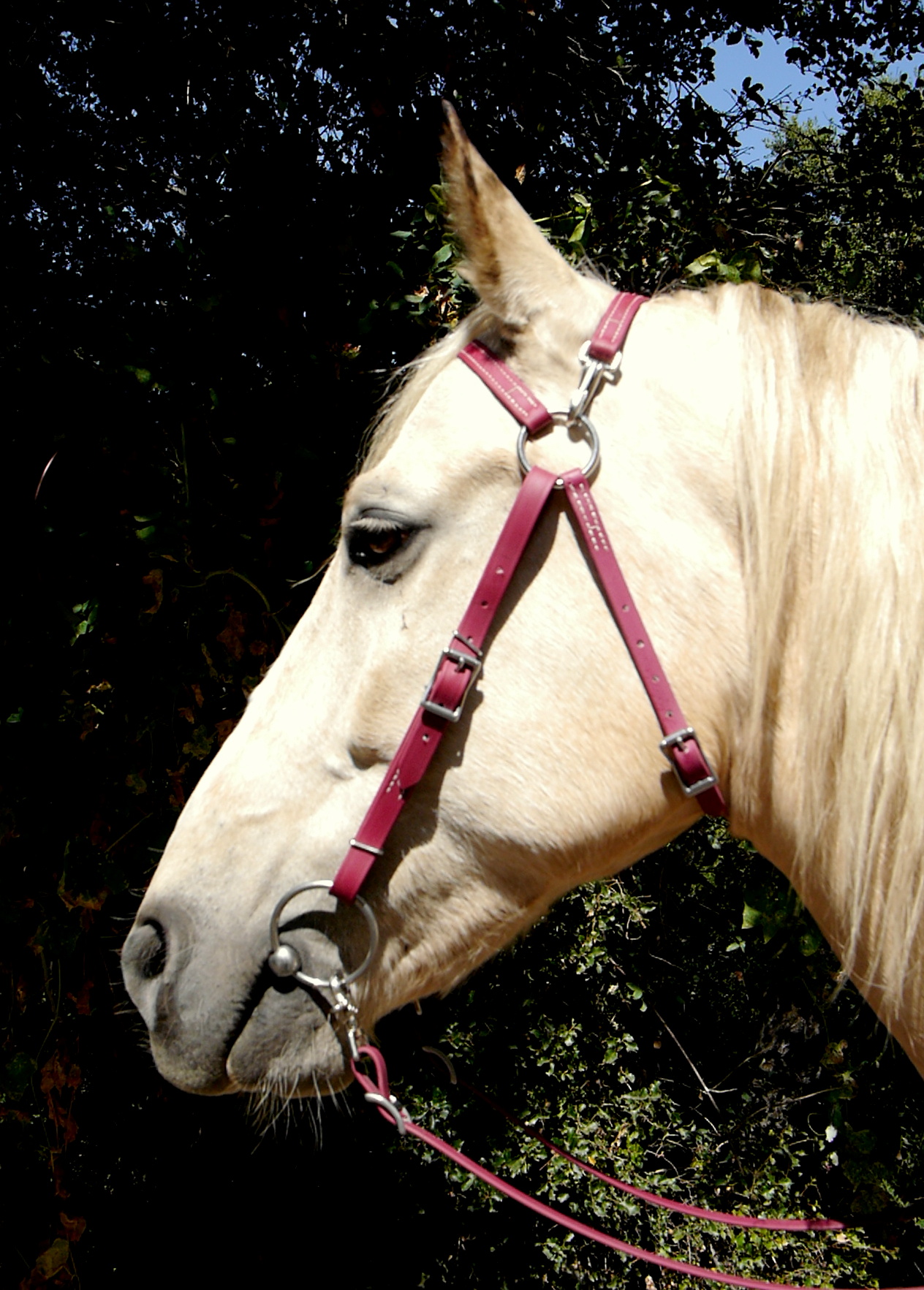 I know leather aficionados are cringing, but there are really a lot of advantages to Beta Biothane tack. The main advantage to my mind is the durability and ease of care. I love soft and supple leather too, don’t get me wrong. And I do enjoy cleaning my leather tack and having it transform. But, I am a lazy person at heart. And Beta Biothane? You can wash it in the dishwasher. 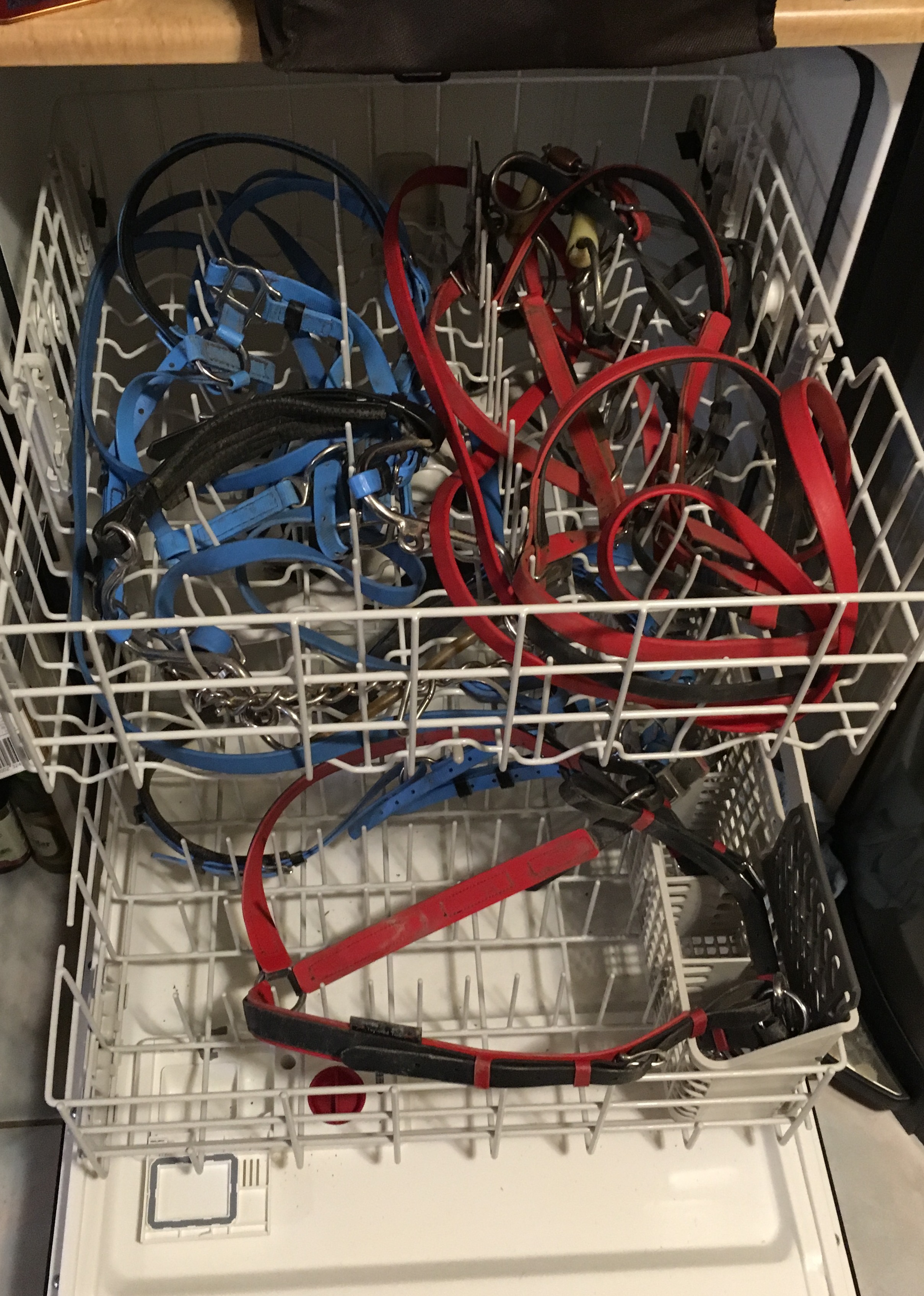 Seriously. Beta Biothane stuff is the best for endurance tack. It can get coated in sweat and you can just rinse it off while it’s still on the horse. If it gets really dirty, a quick rinse in the dishwasher will have it looking like new. I know some people put theirs on the floor of their shower while washing and it cleans itself. I don’t think it needs to just be for trail and endurance riders either. I think it would be great for schooling equipment or for a lesson program.

My other favorite aspect of Beta Biothane is all the pretty colors it comes in. Since I’m obsessed with keeping all of my horse’s tack color coded it’s perfect for me. The only real problem is that this Burgundy looks so good on Nilla I’m now tempted to switch her over to that from the blue. It’s just that pretty.

Two Horse Tack has 14 different colors to choose from and you can mix and match the colors or add bling as desired. You can also choose brass or stainless steel for the hardware to really customize your tack. 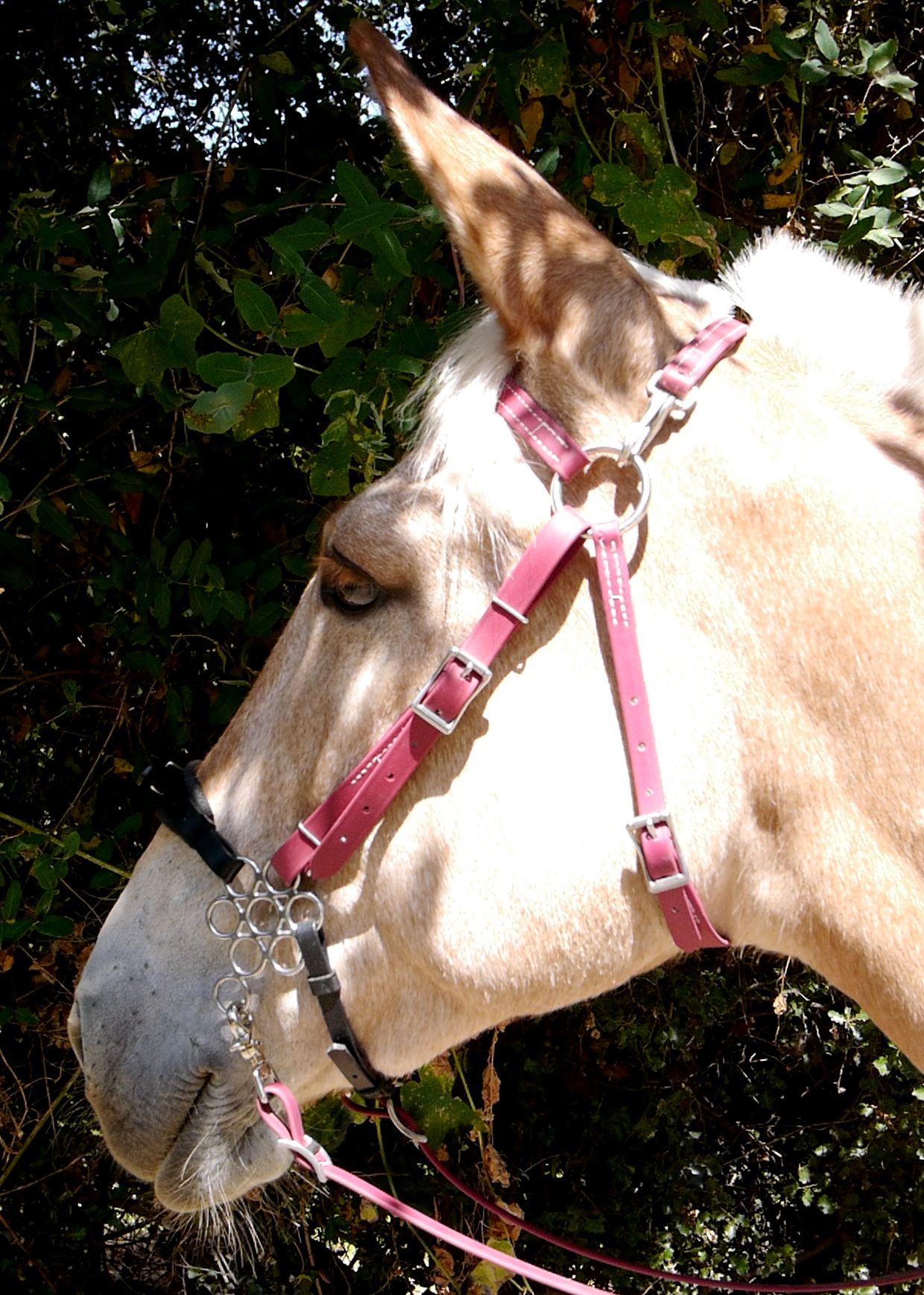 When I ordered this bridle, I gave them measurements of Nilla’s current bridle. I also asked that they put enough holes in so that I could shorten it up enough to use a hackamore. If you’re thinking of ordering this bridle from Two Horse Tack and want it to work for both a bit and a hackamore, make sure you request this. I have mostly been using the mule bridle with the hackamore and I’ve been using it for both Nilla and Levi. Since Nilla’s hackamore lives in the trailer, it’s nice to have another hackamore option in the tack room when I just want to go on a quick ride from the barn. 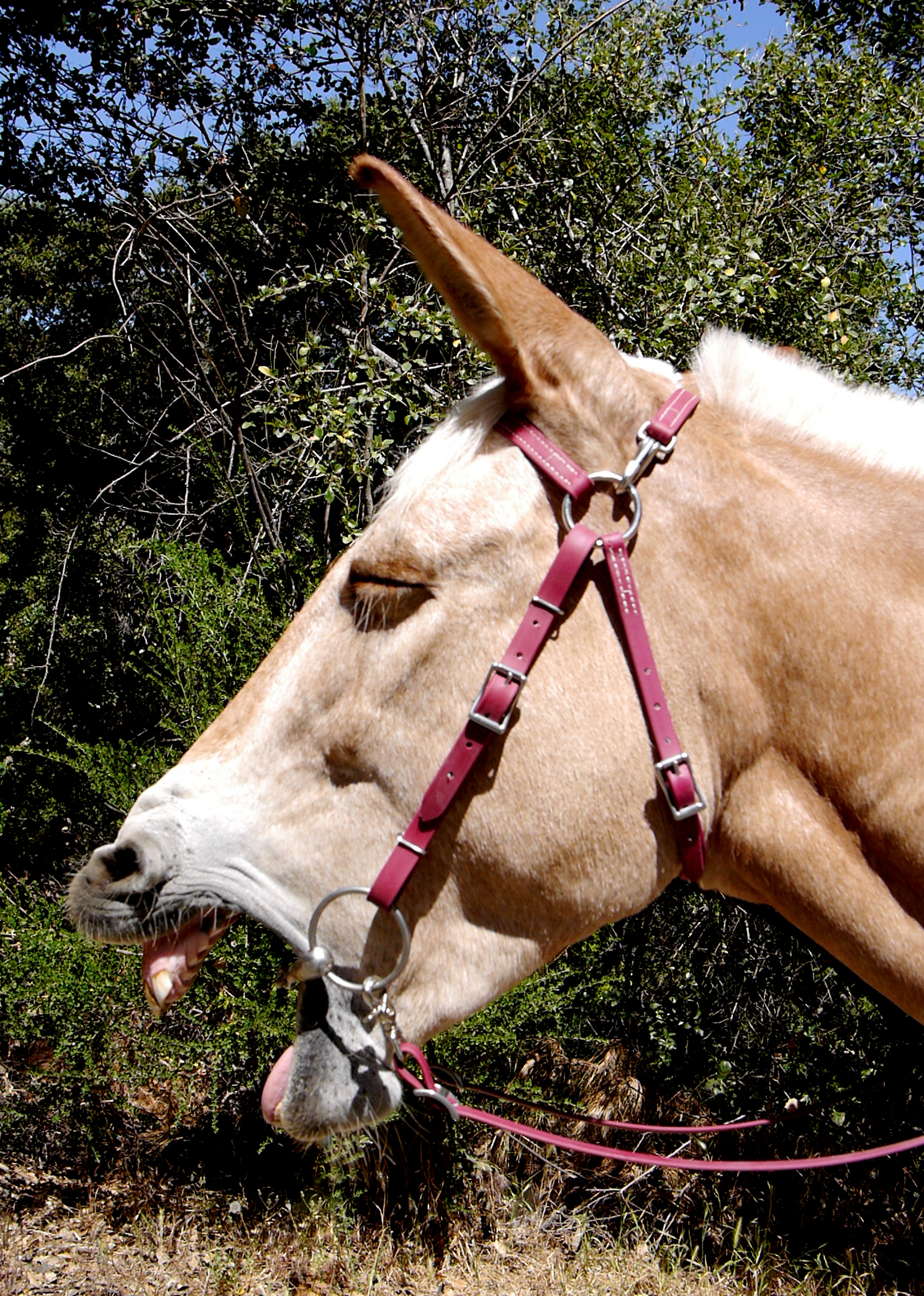 While I like using the mule bridle for Nilla because it’s a handy hackamore, I really like the design of the mule bridle for Levi. As I mentioned, his ear issues can make him difficult to bridle. While I am certainly not giving up on the training issue and continue to work on desensitizing him, it’s nice to be able to tack him up without any issue. I just slip the hackamore on or bit in, pass the strap around behind his ears, and clip. Bam. Done.

Levi absolutely loves this “mule bridle” from @twohorsetack. Why? Because I can put it on without touching his ears! #blmmustang #mulebridle #demandthebrand #bridles

And he looks fantastic in it too. I really do love this color on him and Nilla. The only thing I don’t really like about this bridle is the way the straps that attach o the bit or hackamore are constructed. I don’t really like having all the bulky strapping and conway buckles and would prefer english style of cheek pieces. I also wish the excess strap had a place to be tucked in. Finally, the stitching on the Two Horse Tack bridles is not as neat and even as my husband’s Taylored Tack bridle. However, the Two Horse Tack cost about 1/3 of the price and included reins. So I think Two Horse Tack is the best value option. 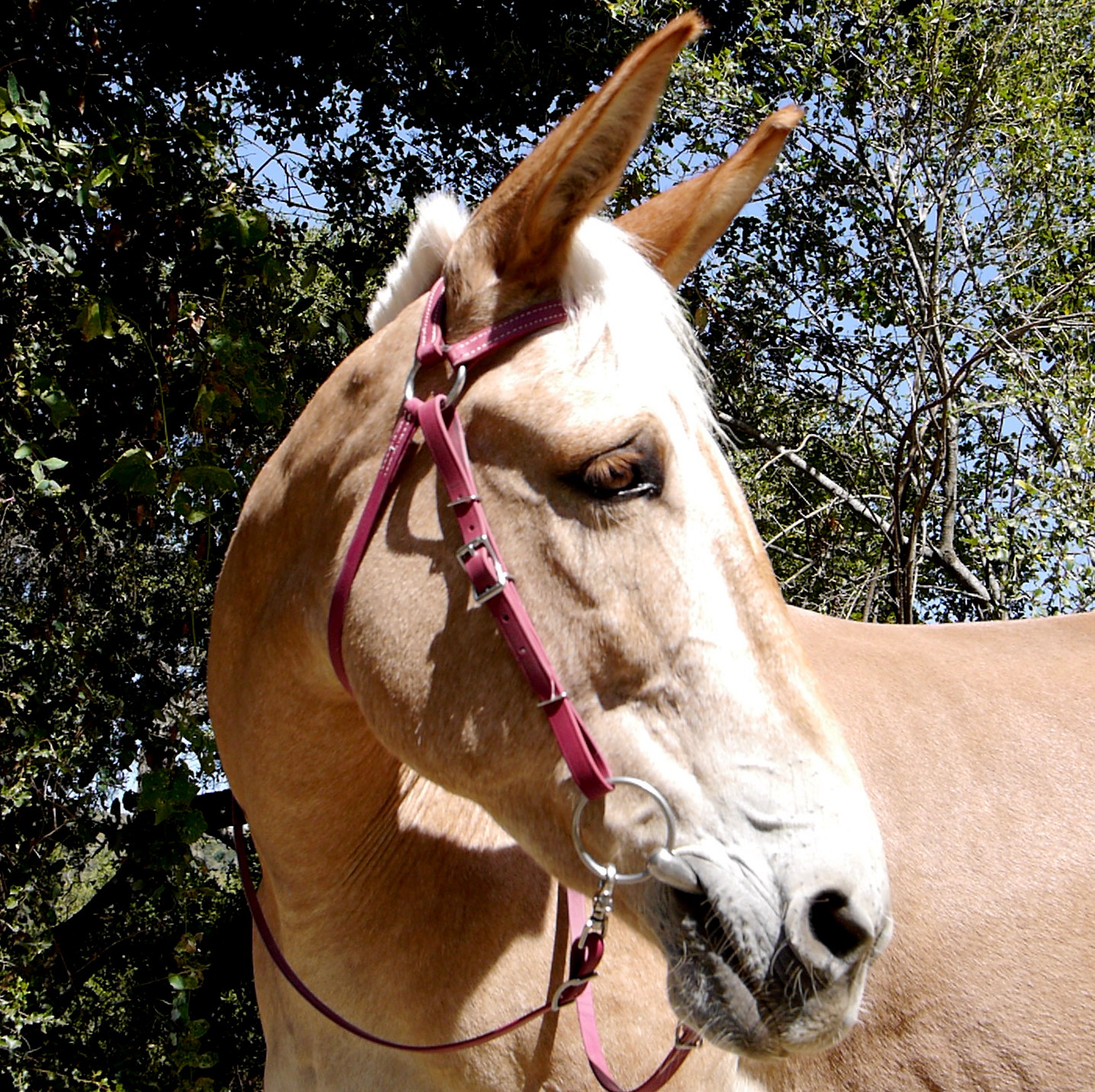 As I mentioned in the beginning, I’ve had two horse tack products for a few years. They do hold up well. None of mine have torn or have any rust. They also don’t collect mold and mildew like in the winter like our leather tack does. Although I bought Nilla’s endurance bridle before discovering Two Horse Tack, I ordered reins from Two Horse Tack for her bridle because I really like their reins. They’re smooth and don’t get stuck on anything. I love that they clip on and are long enough for Nilla to eat while I’m mounted and I can use them to tie her.

All said, I would definitely recommend the Two Horse Tack Mule bridle. If you’re interested in purchasing one for yourself (or any other product from Two Horse Tack) they gave me a coupon code to share for 10% off. You can also join their newsletter to keep abreast of future products and sales. 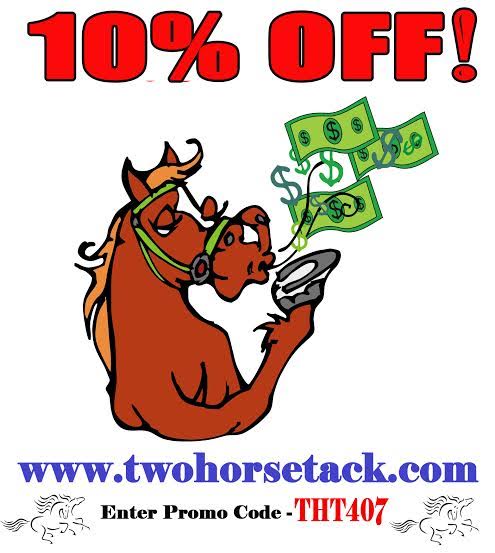 Disclaimer: I received the mule bridle for free. However, I was not required to write a review and no other financial renumeration was provided.