Is my house unpacked?

Are my pastures mowed?

Did I fix the electric fence?

Did I take the trash to the dump?

Did I go to a horse show this weekend?

We still don’t own jumps and we have an event coming up. Since the last time we jumped the ponies was on August 13th, it seemed like maybe not the best idea to show up at an event without at least getting over something first.

This was a low-key jumper schooling show. Each division had a speed class followed by a jump off class and then a money class – which was a speed class again but with no ribbons or points towards championship, but you won $. I entered the 18″ and 2-2’3″ divisions and my husband did the 2’6″-2’9″ and 2’9″-3′ divisions with Eugene. He also did one class at 2’3″ to 2’6″ on Levi because he wanted to and the girl running the show asked him to give the only other entry in that division some competition. 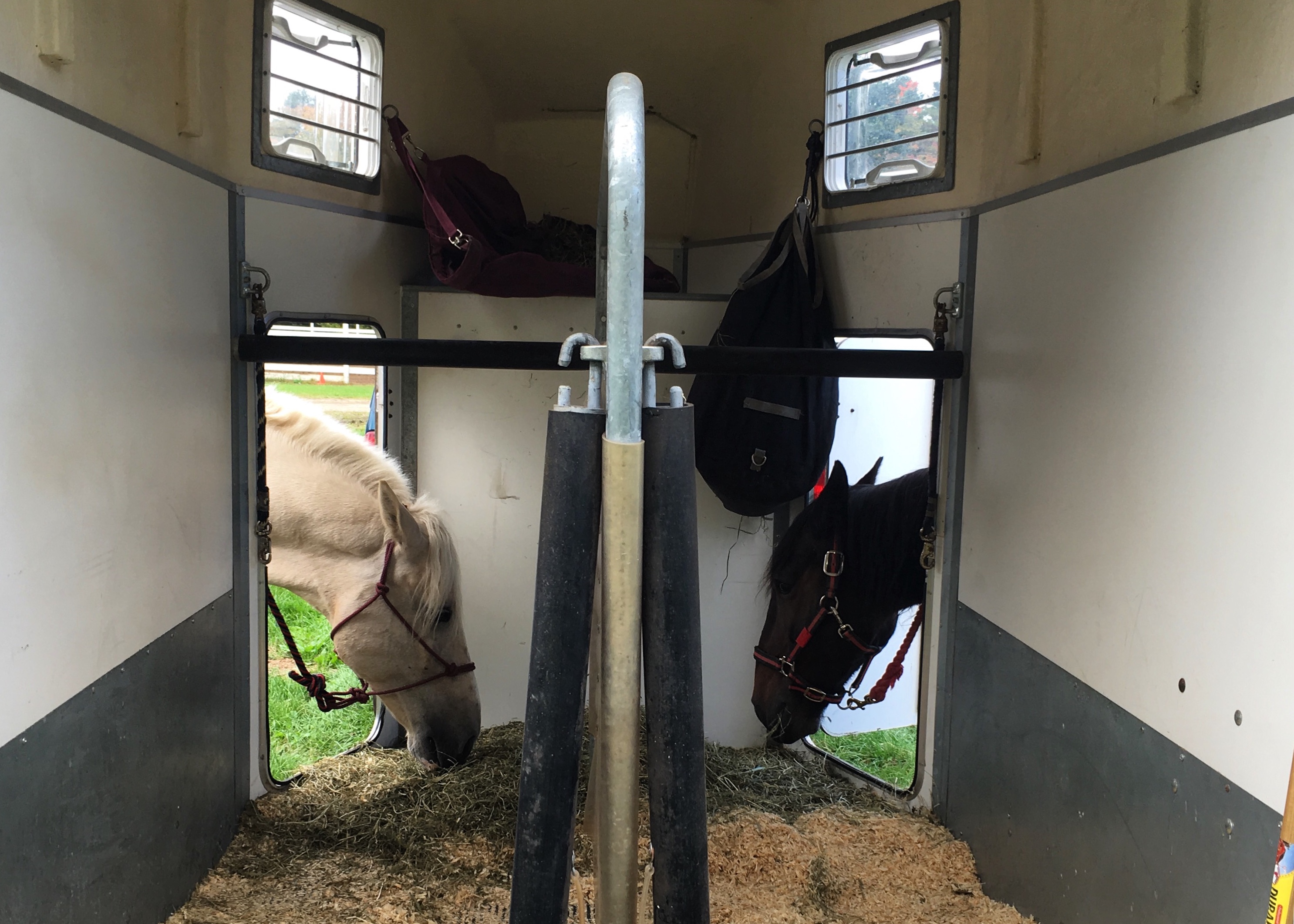 The ponies were very busy while we were signing up

The 18″ division was super popular. There were 15+ entries in that division and then 4 in the next and then 2 and then 1, so by far the most popular division. The jumps were mostly cross rails and even the verticals weren’t 18″. I would have skipped it, but I didn’t know that warm up rounds were going to be available and I didn’t want to just start at 2′ having not jumped in like 6 weeks and Levi loves to stop at new jumps even when he’s in practice.

After I had gone over the 2 jumps in the warm up, they announced that warm up rounds in the arena were available for $2. Well, okay then. I did a warm up round. 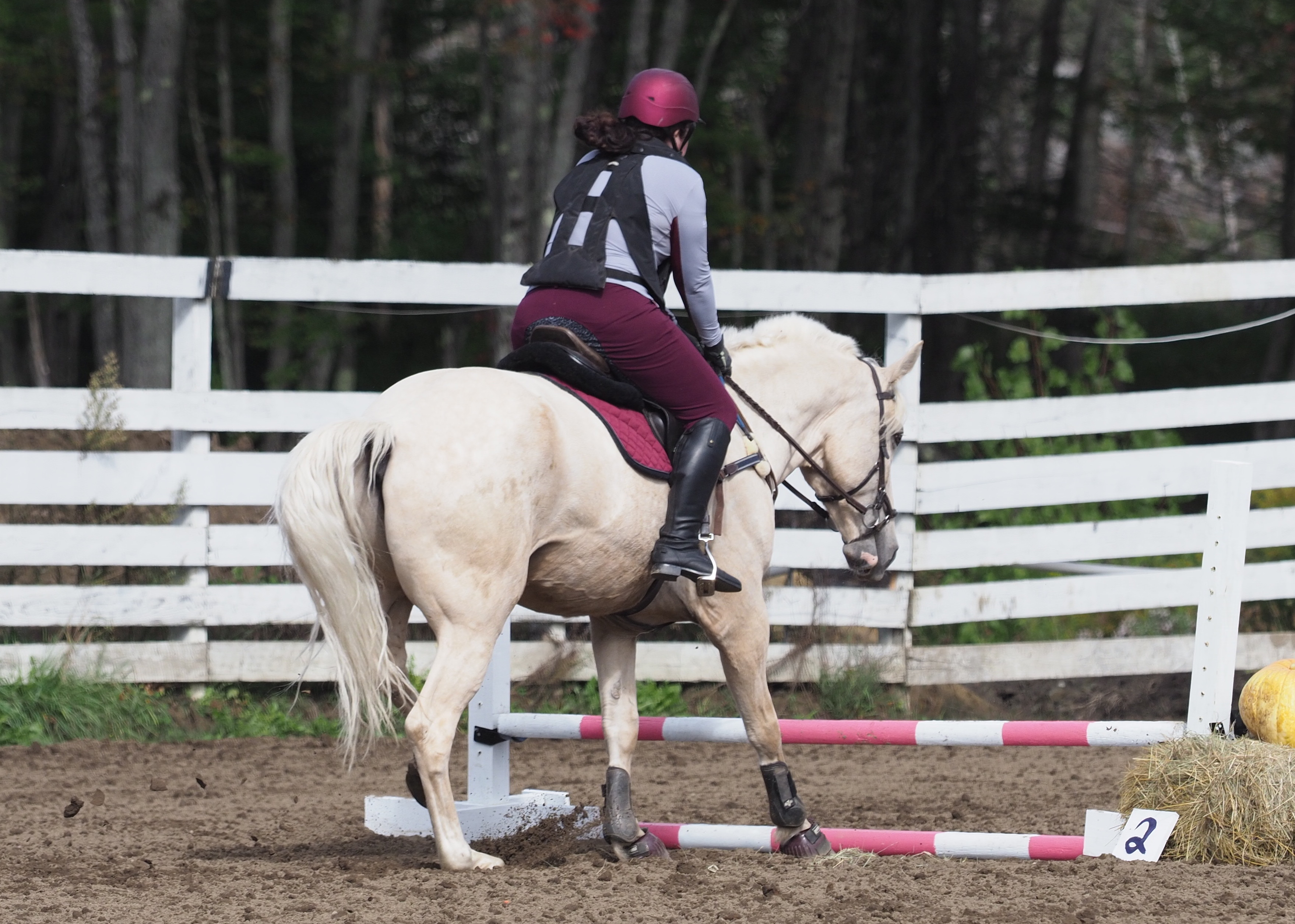 Levi: “I have never seen a jump before in my life; I should slow to a crawl and stare at it first”

We did manage to get over every jump on the first try, but it was a good thing the jumps were small. Levi tried to stop and sniff every jump and then awkwardly hurled himself over it from what was almost touching the jump. 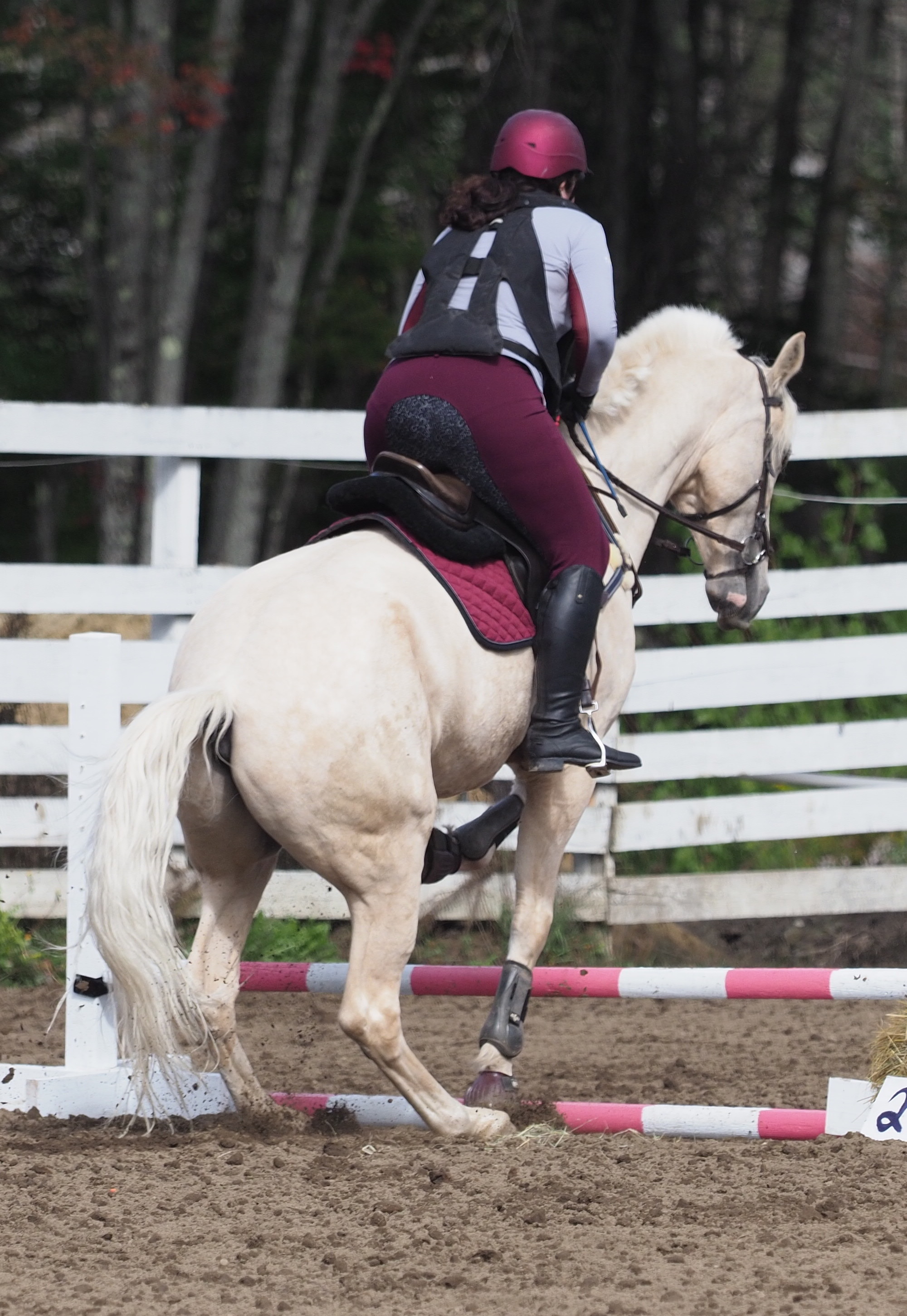 Levi: “my legs are so close to this, I must do dramatic maneuvers to make it over.”

Then it was time for our first round. The course was outside line to outside line and repeat to make 8 jumps. 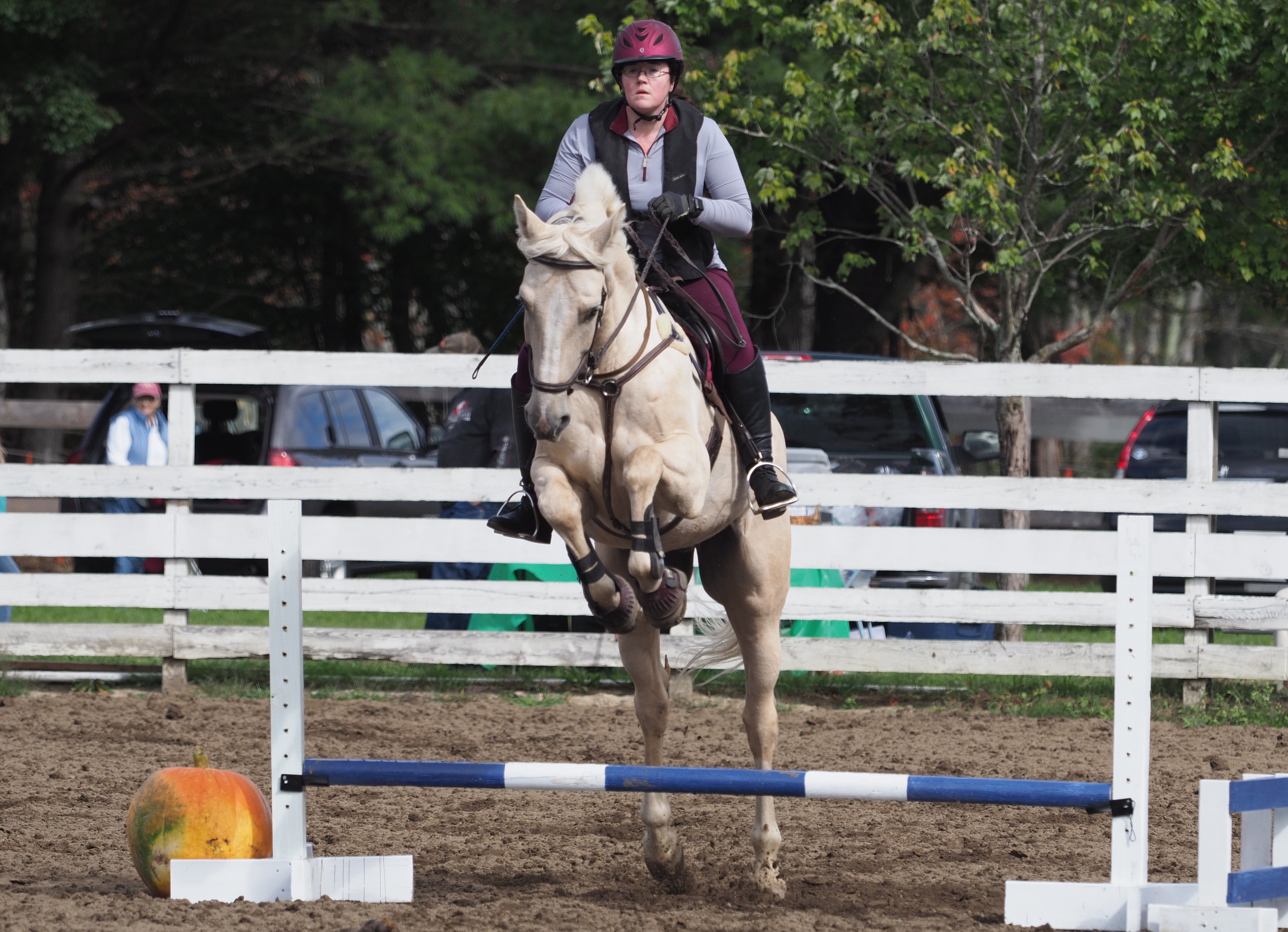 Levi: “Don’t worry, I can make up for the jumps being too small”

I’m not a huge fan of racing horses around 18″ courses. I don’t really even think there should be speed rounds at such low heights. That being said, every single trainer I ride with wants me to get Levi going both more forward and faster. I figured this was a good opportunity to work on that skill.

Levi was getting pretty into this whole go fast and jump things thing. The next class was an actual course. It was untimed and if you went clear, the jump off was 5-8 again. 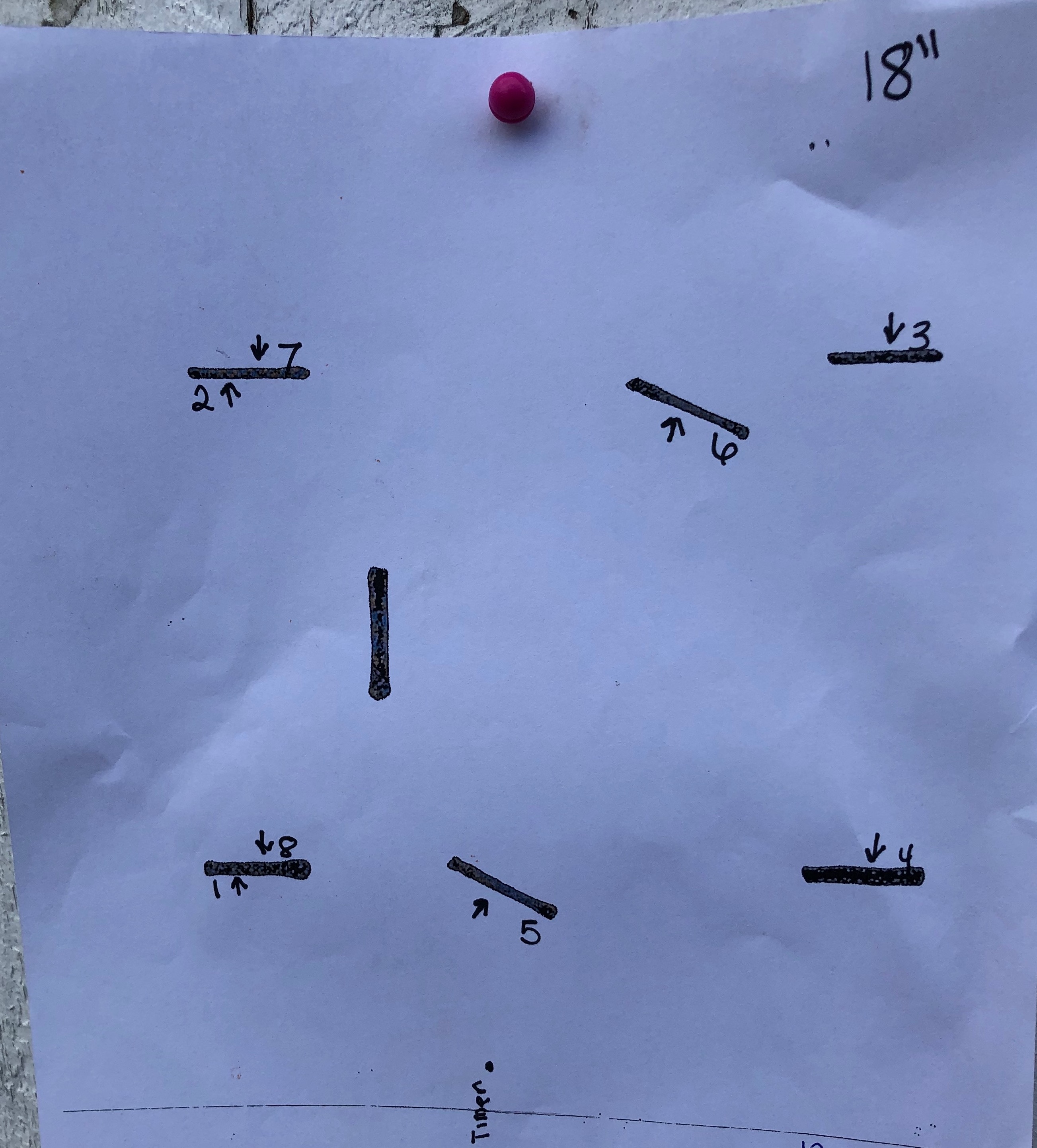 We were clear and I even let him go a bit faster in the jump off. 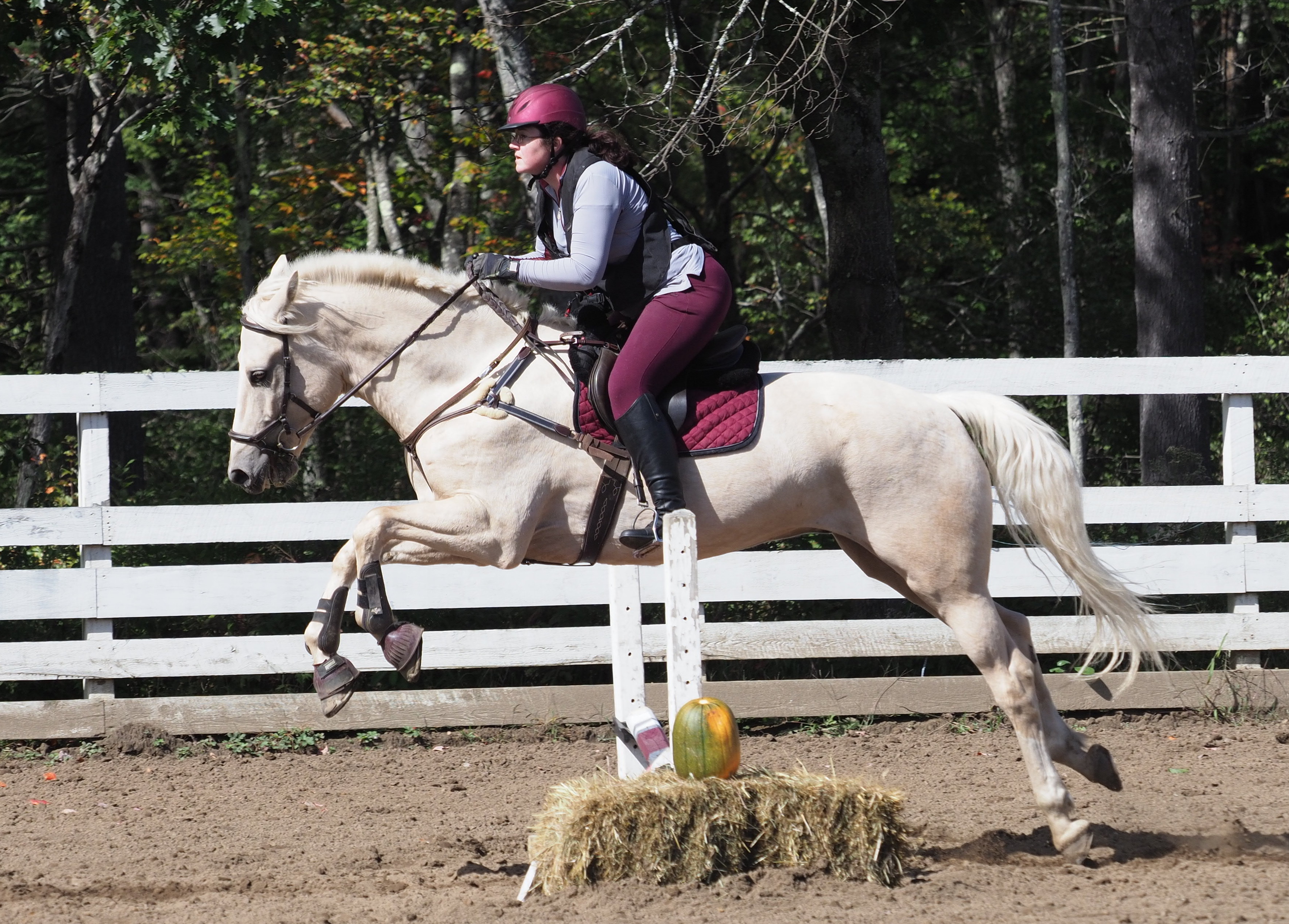 Of course, Levi’s fast is other horse’s normal. Which, you know, is kinda why everyone wants me to make him go faster. But he thought he was going fast. 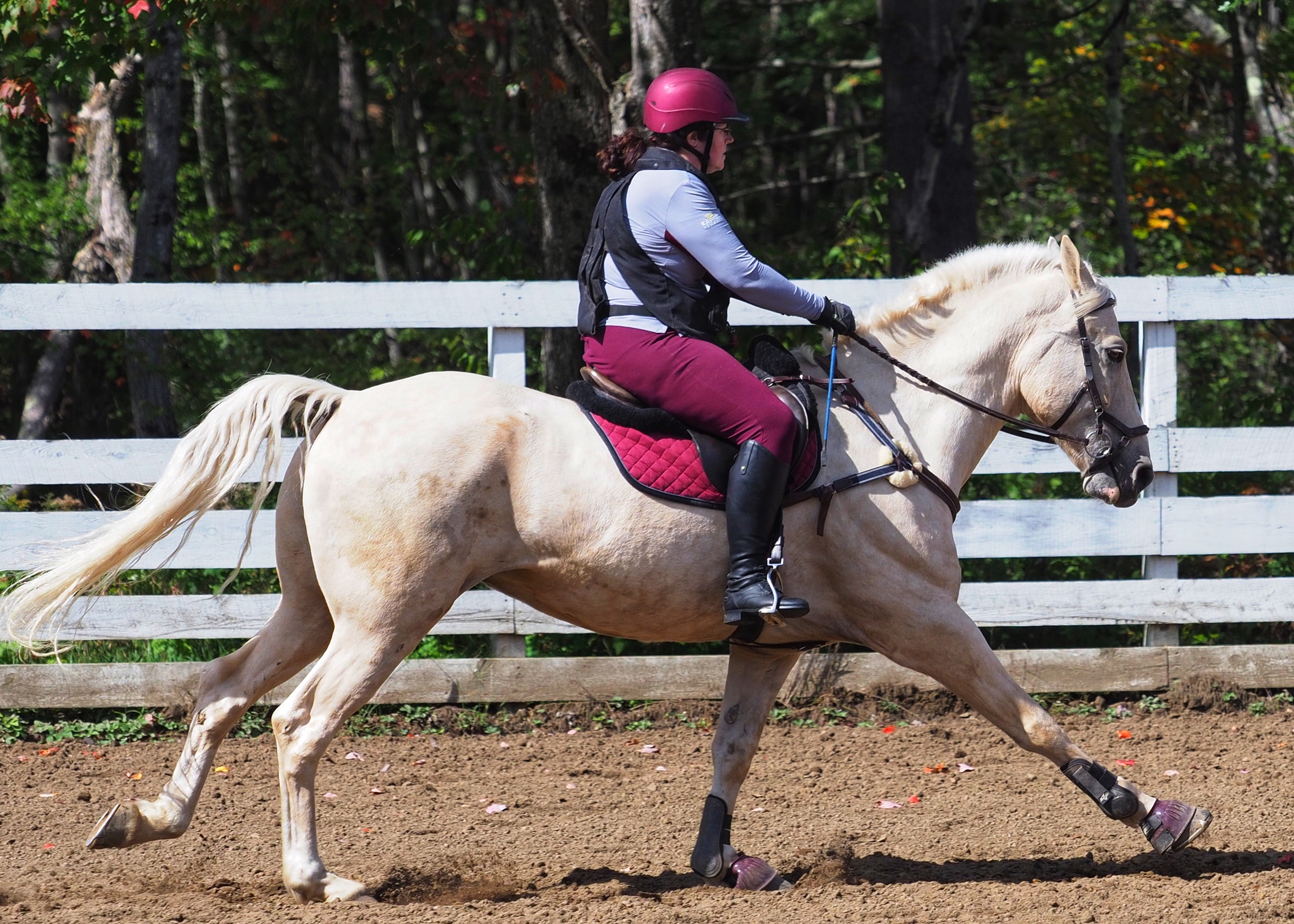 The last round was the money class and it was literally just 1,2,3,4, fastest time wins. Levi was loving it. 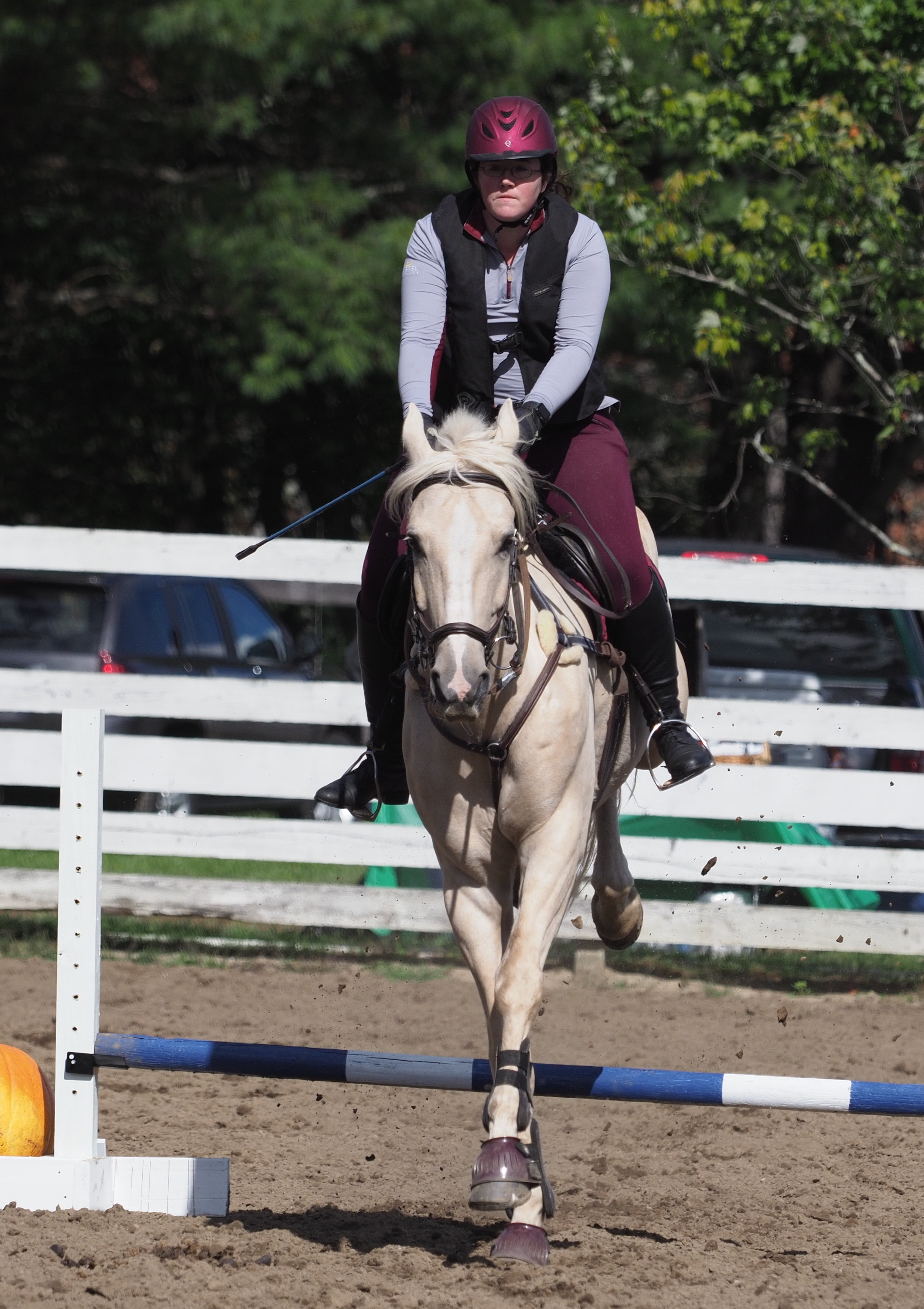 There was a guy riding his mom’s barrel horse doing the 2 speed classes including the money class and he just bat out of hell blasted around that course. Levi might have thought he was going fast, but he was no match for a barrel horse flying around skimming over tiny jumps. No $ for us.

Because of all the entries, they ended up splitting the 18″ division into juniors and seniors. We ended up getting 2nd out 6 for the 1st class (the barrel racer beat us) and 1st out of 6 for the jump off class. That meant we won the division and I got a pretty maroon halter. 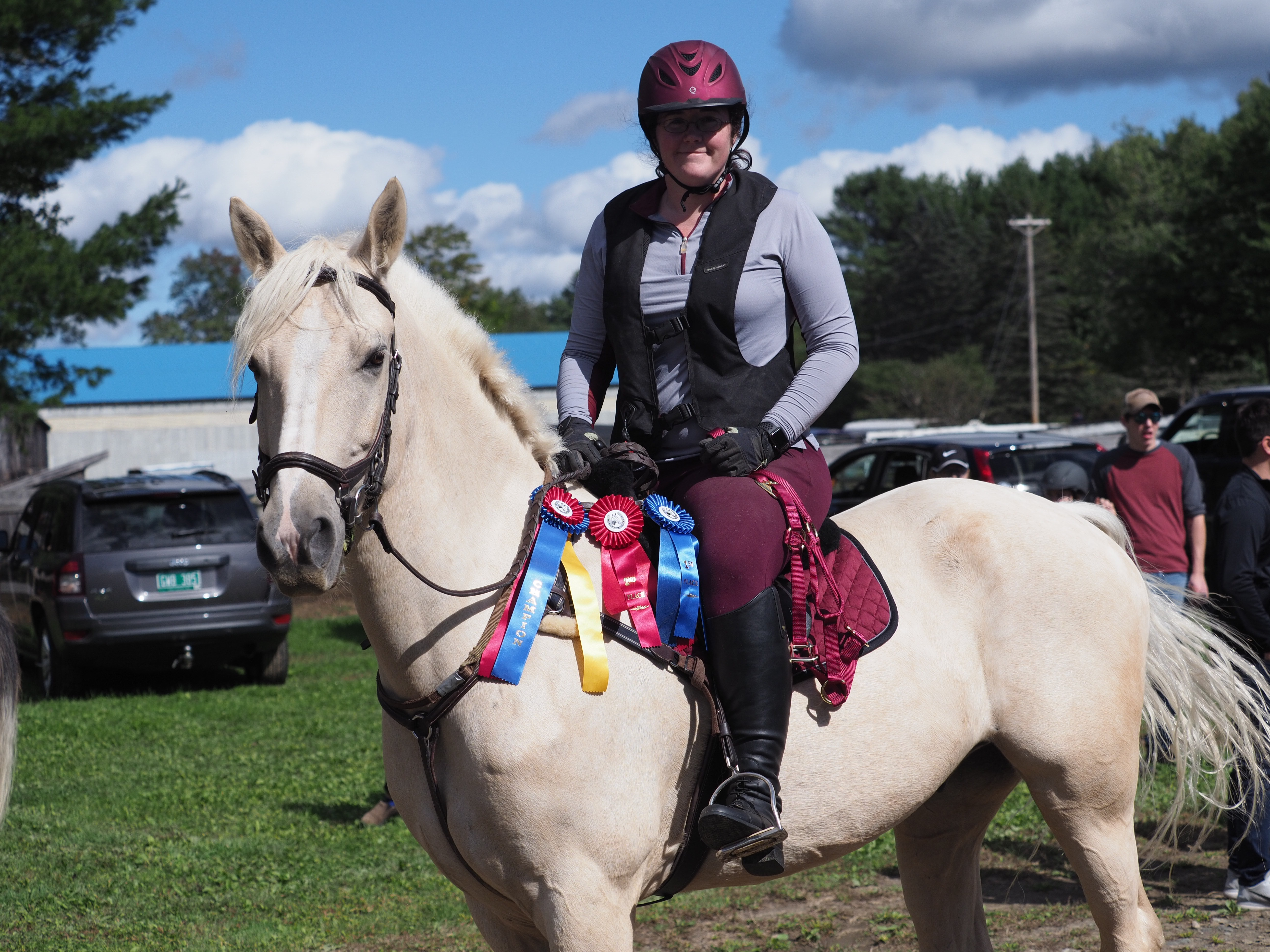 Then it was time for the 2-2’3″ division, which shrunk dramatically from the 18″ and only had 4 entrants.

We entered the ring and Levi – who now assumed that he was a race pony whose only job was to run fast and clamber awkwardly over inconsequential poles – quickly realized the jumps were bigger. 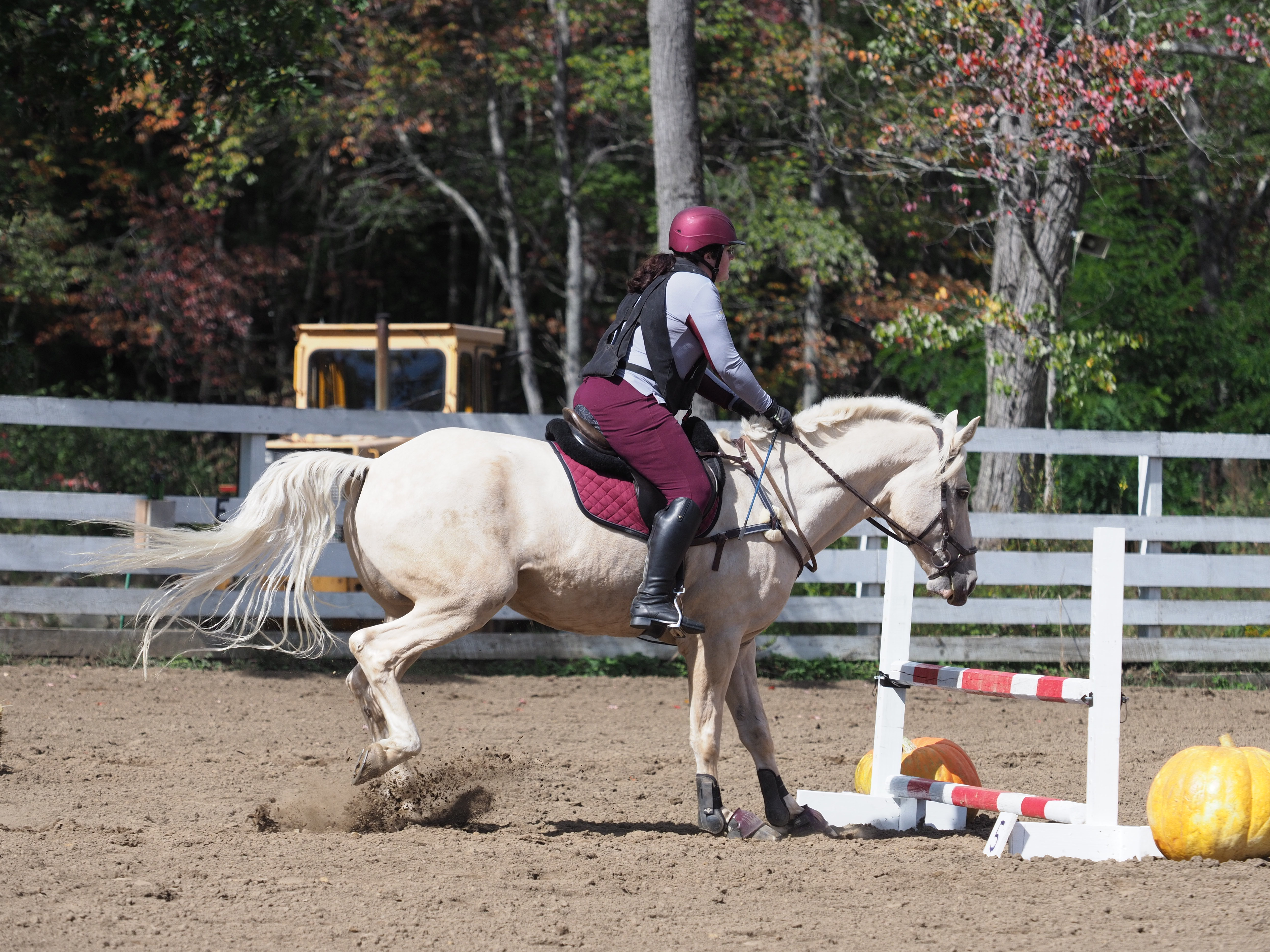 Levi: “I should stare at this first”

We managed to go clear, but it was not fast enough to beat another barrel racer or the girl on the very well behaved lesson OTTB and we got third. 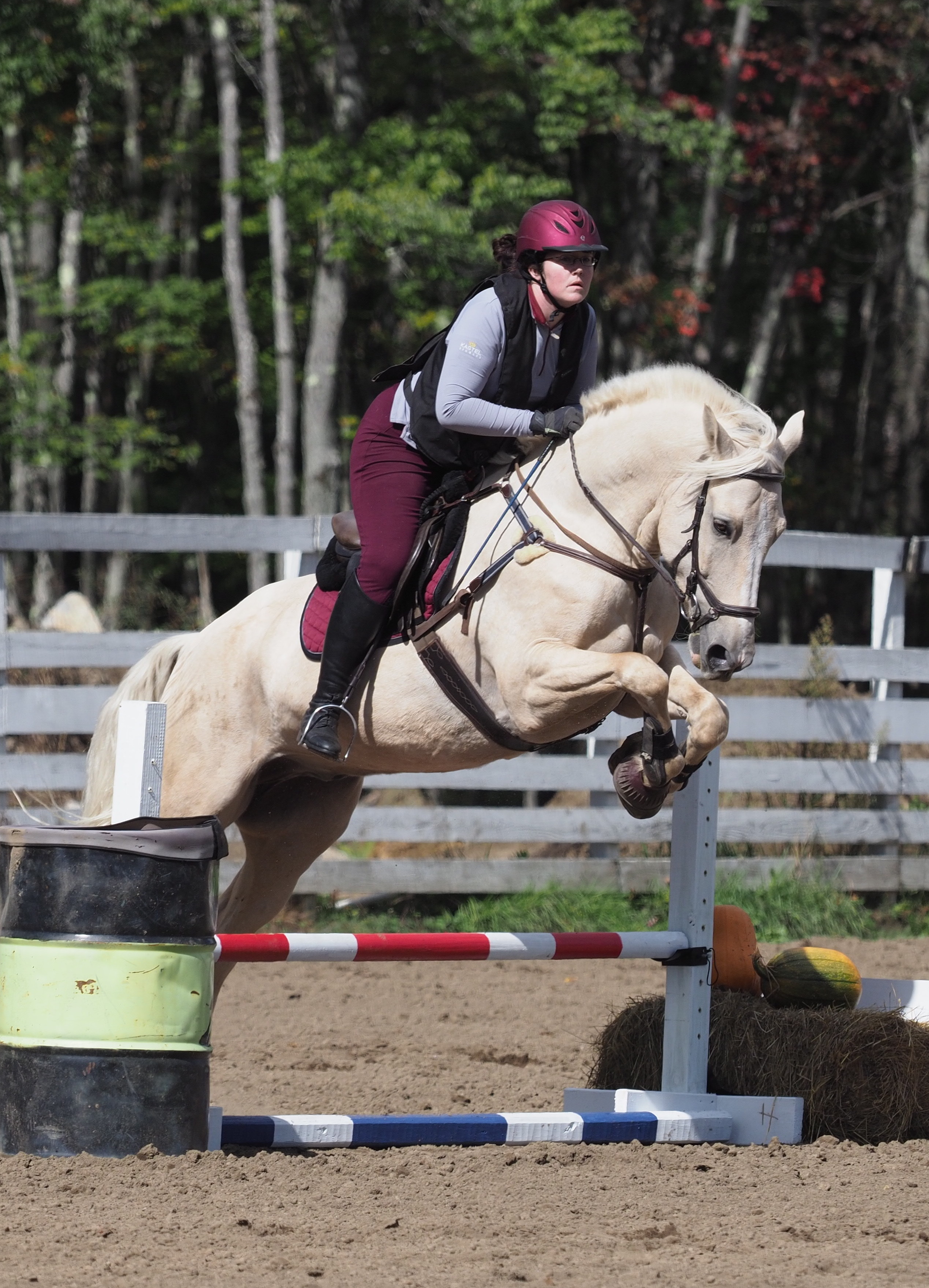 Levi: “These slightly bigger jumps are getting in the way of my racing around”

The second class was the jump off and Levi – now fully convinced his only job was to go as fast as possible and damn be to me for wanting him to listen – knocked a rail. After he knocked the rail we had a bit of a discussion about listening and how it is actually required. 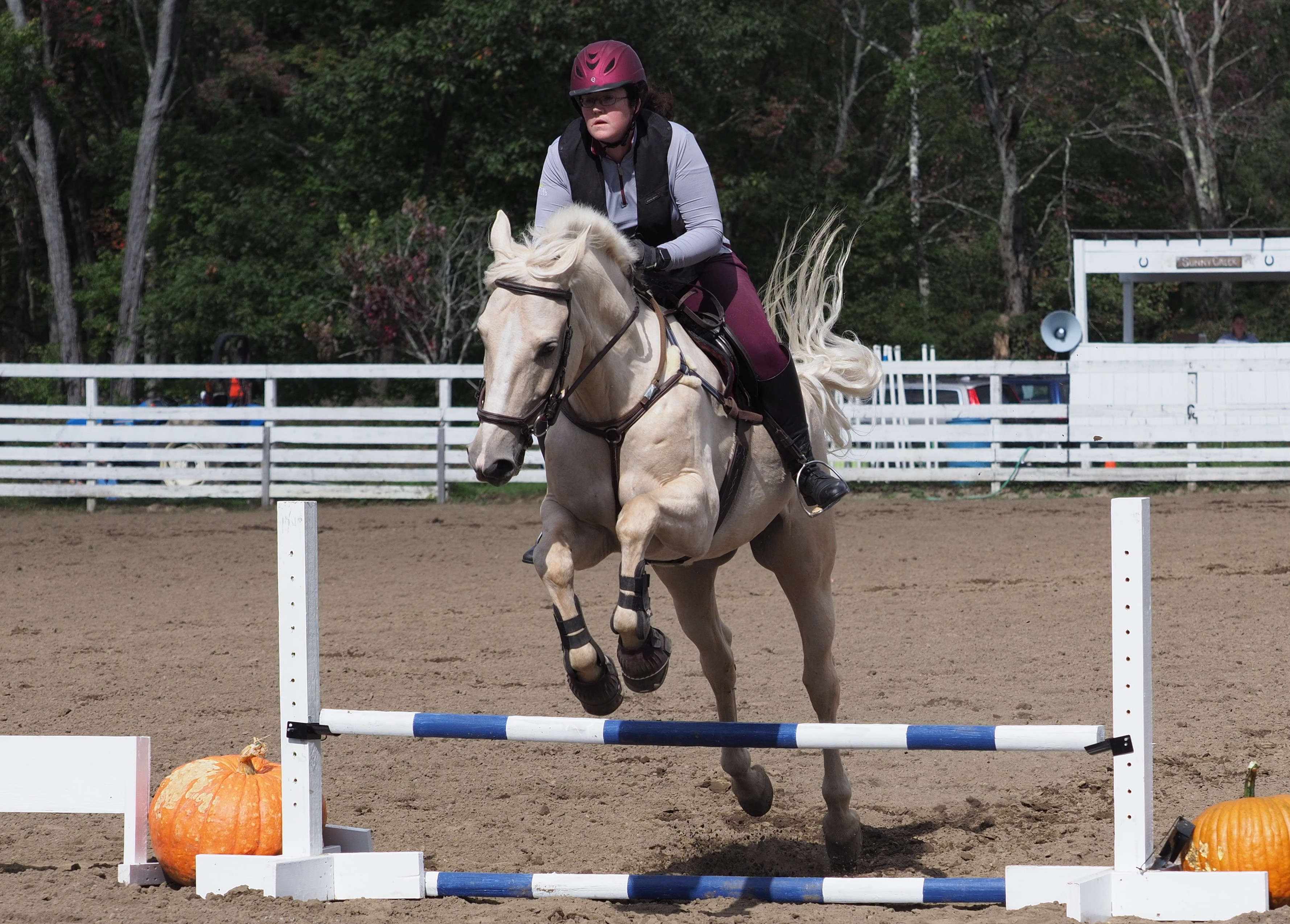 We didn’t make the jump off and got no ribbon for that class. Finally it was time for the last class, the money round. I knew we weren’t going to beat out the barrel racer (seriously, her horse flew around that course while the rider ineffectually screamed “woah” the whole time) so I decided to take the longer lines and work on Levi’s behavior. 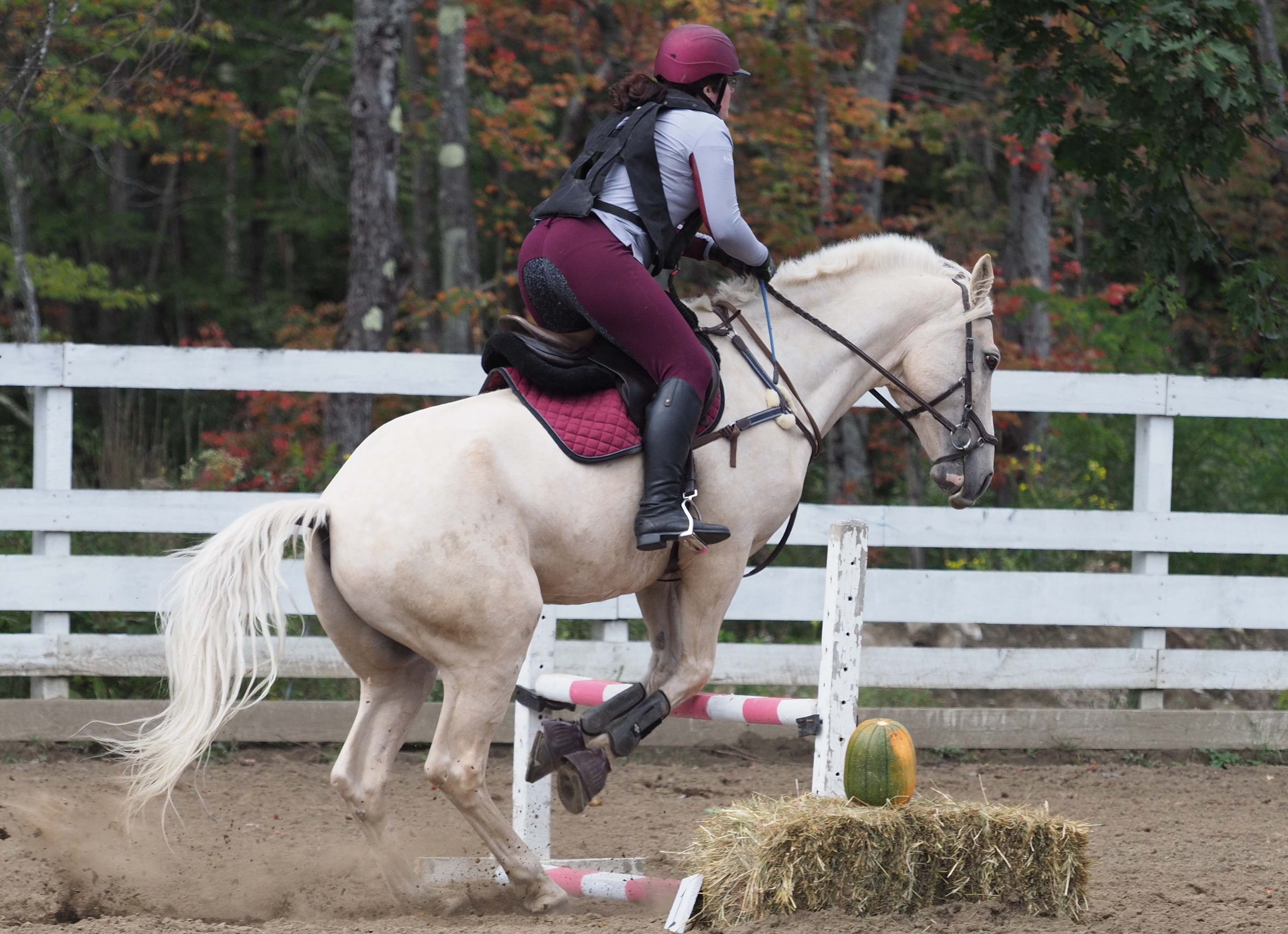 Levi: “OMG stop trying to make me listen to you; clearly I know what I’m doing”

When we finished, one of the coaches told her student her student: “did you see the lines she took? Don’t take those lines.” They went in, took all the inside lines, and looked lovely doing it. Meanwhile, we looked like this. 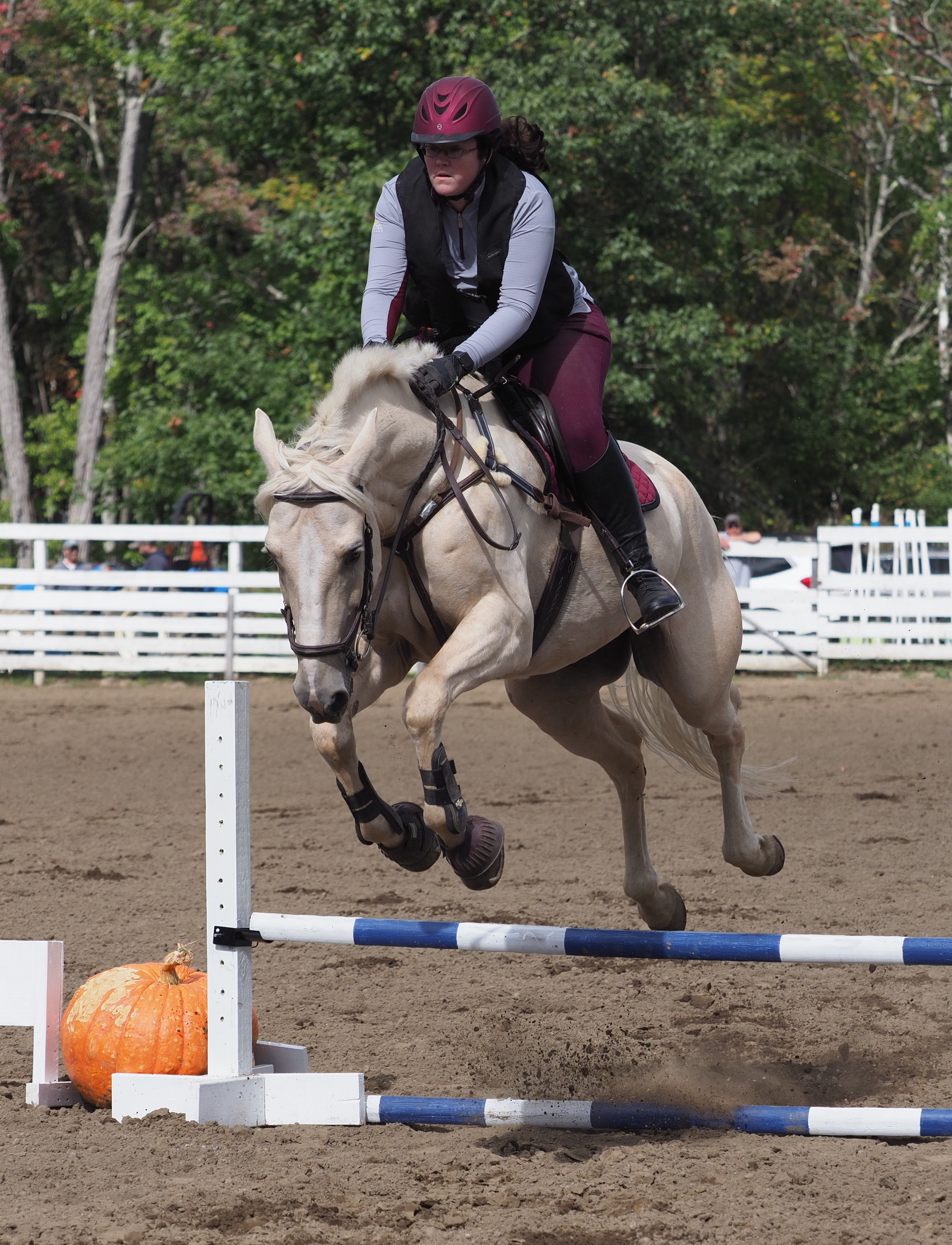 It was a great schooling show and we both had a lot of fun. I’m glad I got a chance to jump Levi before our upcoming event. It’s taken me way to long just to get this much of the post done so I’ll have to do my husband’s rounds in another post.