Fresh on the heels of schooling at Camelot, we went schooling at Woodside with Kate on Thursday. We got an email saying they had finally opened the course right before we left for Camelot and they were going to close it on the 8th before the rated at the end of the month so we knew we needed to get in quickly.

We arrived bright and early Thursday morning to check in at the office and then get the ponies tacked up. I wanted to have fun, but I really try not to jump Nilla that often so I planned on only doing a few of the jumps. Once Kate arrived and we were all ready to go, we hit the course. I forgot to start my helmet cam in the beginning and missed schooling the first water and the first few jumps, but remembered around jump 3 or 4?

We started with trotting around the track and then cantered from point A to point B. Since Kate actually knows what’s she’s doing and does this for a living, she was really helpful. She had measured out 350 meters and we did a canter to that point to see if we were on time. We ended up about 4 seconds slow, but I was surprised with just how slow 350 felt. Nilla is the slowest canterer and I was even holding her back. We couldn’t probably maintain that pace all the way around a course, but it was really much slower than I felt like I should be going.

We started with the first jump and went back and forth over it a few times. Or David and Kate did. I did it in one direction and then waited. I was really surprised with just how small many of the BN jumps at Woodside were. Given just how large the jumps at Eventful Acres had been and that I’ve heard Woodside is a difficult course, I thought the jumps would be a lot more challenging.

Nilla was in a freaking mood about jumping. She took the first few nicely, but then decided she needed to get in as close to the base as possible, nearly stop, and then coon jump from a near standstill. She might technically be capable of doing this, but it’s really hard to ride, not safe, and I’m pretty sure I’d get carded for doing it at an actual event. So my footage is pretty scary.

We schooled a little log cabin at one point and she tried to do the whole slam on the breaks thing and jump from a standstill, but I yanked her aside and didn’t let her do it. I’m not sure that’s the best way to solve this problem, but we came back around with force and she actually moved over the jump.

At the second water, the course has you jump in over a little cabin, go through the water and jump a log on the other side. We did the cabin and water, but not the log. Then I wanted to school the water out to the log. Going to a jump after water was our downfall at Eventful Acres and I need to do a better job of getting her attention back on the jumping even though she’s still upset about the water. Thankfully, she went over really nicely.

She’s such a cute jumper when she’s not impersonating a deer. #mulesofinstagram #eventingmule #jumpingmule #eventing

You’ll also notice me running around jumping little logs in the video. They’re not part of the course, but I wanted to remind her about jumping while moving and not from a standstill. I have some more practice scheduled for June and in the meantime, Nilla will get some rest from jumping for her hocks while I work on Levi.

While I was taking it easy with Nilla, my husband and Eugene, had different plans. 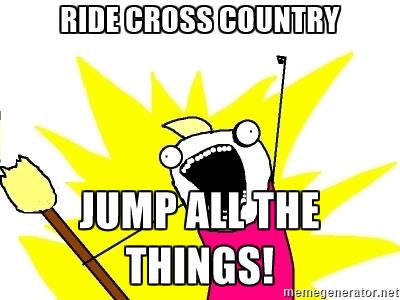 They were having so much fun jumping everything they could and running through the water. Apparently the BN jumps weren’t challenging enough so Kate coached them through some of the novice questions.

At about 1:10 you can see them doing a novice combination. The first time through it was not pretty. I don’t think Eugene was prepared for how big those jumps were going to be. But he still did it. And he came back around and did it better the second time. I really do not know how my husband lucked into getting this horse. Green and green should equal black and blue, but the little Mustang just forgives him for everything. Oh did, you totally screw that up and fall on my back? Whatever, let’s do it again. 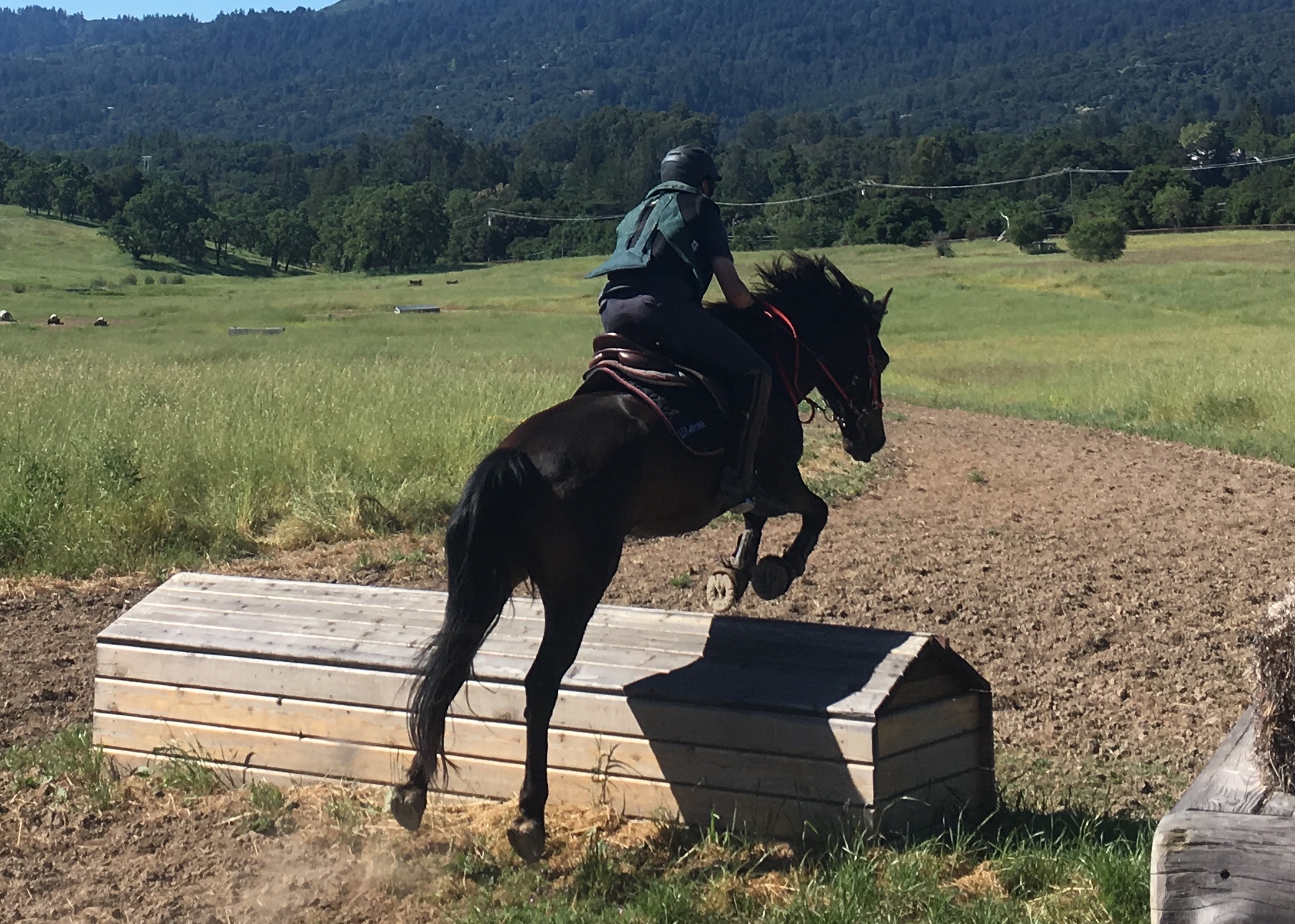 Eugene: “I got this”

They also schooled the novice ditch complex because BN doesn’t do a ditch at Woodside. Which is weird to me. You think there’d be one of everything and for a supposedly hard XC, I’d expect a ditch. 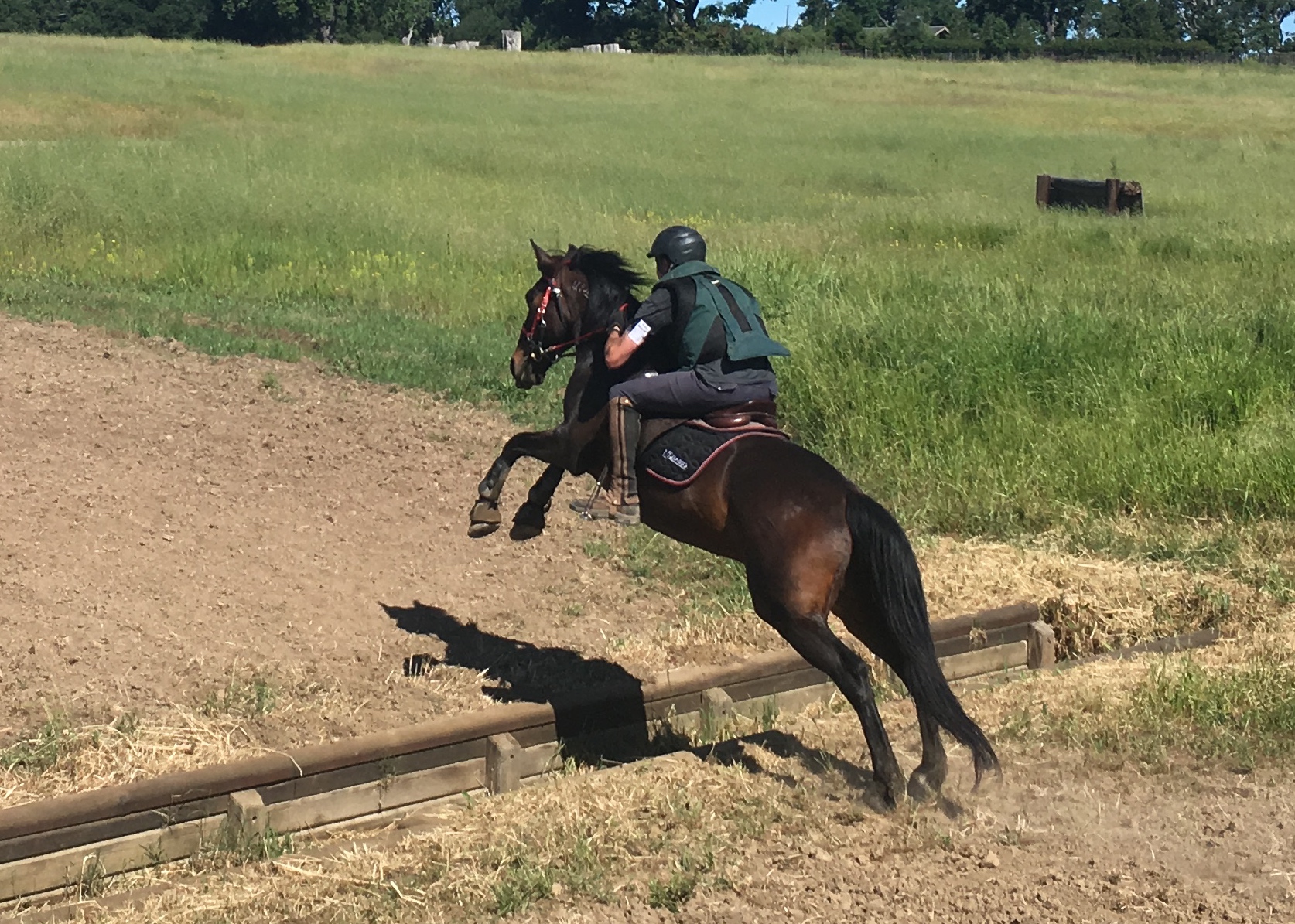 We finally got around to the banks and my husband and I were excited to have Kate along to help us teach Eugene how to do banks properly, but apparently he had magically taught himself since Camelot and just hopped up and down them like no big deal.

We finished at the other water complex and they tried the Novice line. The first time to the big table, Eugene left out the last stride (which he never does) and my husband got completely left behind. This got cut from the vimeo above, but it was a really impressive save. On Eugene’s part. That horse had like 10 opportunities to dump my husband, and yet chose to tolerate him getting left behind, landing terrible, falling onto his neck (he’s literally sitting in front of the saddle at one point) and even flipping his one rein over his head so they were both on the same side. I have video from both of our cameras of this jump. I think the funniest part of this video is how both Kate and I just sit there watching it like “eh, he’ll be fine.” I did yell at him not to fall off because I was concerned he’d waste a vest cartridge. 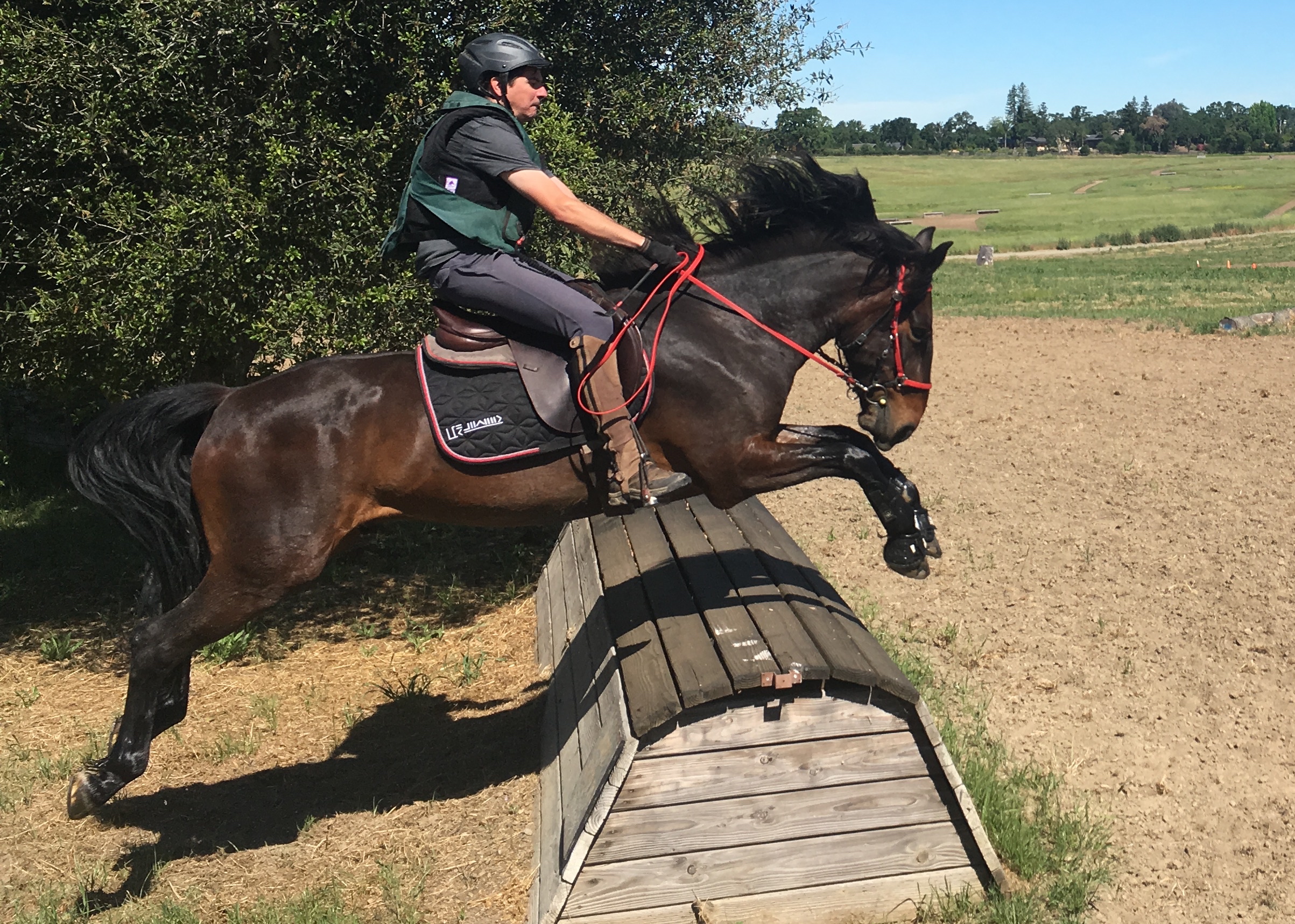 They came back around and did it perfectly though. This horse really doesn’t hold a grudge. I do not know how we got so lucky, but he’s such a good boy.