My husband and I took Shasta and Nilla to Yosemite National Park to go camping Thursday through Sunday. I’ve been to Yosemite a few times now and it is my favorite national park. We went here about 5 years ago and I saw someone riding their horse around the Mariposa Grove and knew I wanted to do that someday.

It’s about a 4 hour drive to Yosemite though so it would be impossible to just go with the horses for a weekend. All of my husband’s vacation days are reserved for other trips so I wasn’t planning on getting there any time soon. However, my husband’s team was given the week off so we put together a last-minute trip.

On Thursday, we packed up the truck and headed to the barn to get the horses and trailer. At the barn, I dosed Nilla with B Kalm, Ulcerguard, and 10 cc of Ace. Any horse would be out of it with a dose like that. I want to emphasize that this was the vet’s prescribed dose because Nilla stayed awake even after multiple injections of 2 different types of sedatives during dental work. But all of this was not enough to get her calm. She was still freaking out spinning in circles just standing at the cross ties while I was trying to put shipping boots on her. Getting her on the trailer was actually pretty good. We used the pulley system, but she walked on fine. She did, however, remain alert and not sedated for the whole trip. She re-skinned her hip and fetlock, but didn’t create any new injuries, so I guess it was a success?

The drive also provided 2 interesting sights: a man riding a clydesdale down the sidewalk in a town near Yosemite’s border and a wildfire in the National Forest outside of Yosemite 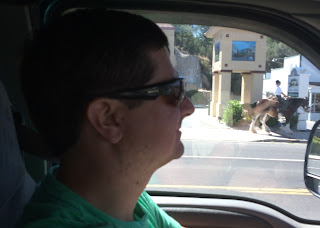 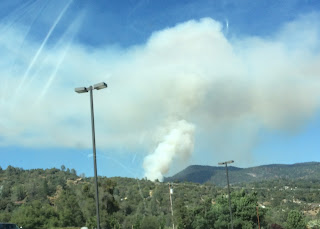 Our drive took about 5 hours since we had to go slower with the trailer. It took us until after 5 to get to the Bridalveil Creek Campground. The camp host was expecting us and said we were the first equestrians at the equestrian campground for the season. We were also the only ones staying in the equestrian campground, which was separate from the rest of the campground, which was full. Campgrounds in Yosemite book up months in advance and the first-come-first-serve ones are full every weekend if not every day as well. It was actually easier to get a horse camping spot than a regular spot. And we had our own secluded area, which allowed us to really relax and enjoy ourselves and feel more like we were out in nature.

The campsite was excellent: lots of shade, plenty of space to park, flushing toilets, and we were allowed to use downfall for our fire. We could also ride straight from the campground to multiple interesting destinations. There weren’t any corrals, so the ponies had to spend their time on the HieTies, but they have really settled in on the ties and do well with them. 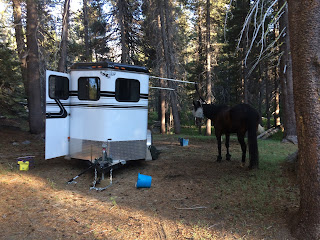 We had salmon and corn on the cob for dinner and then s’mores for dessert. The ponies got blanketed because it gets cold at night at high elevation – the campground is at 7,000′. Then we went to bed and curled up under many blankets to stay warm.

We woke up the next morning, had our usual pancake breakfast and then tacked up to head out on the trails. Our goal was Glacier Point. It was theoretically 8 miles away, which was a long ride, but they’ve done 15 before so it wasn’t too bad. And we planned to walk most of it since the ponies weren’t used to the altitude. However, as the day progressed, we learned about how that mileage was a lie. 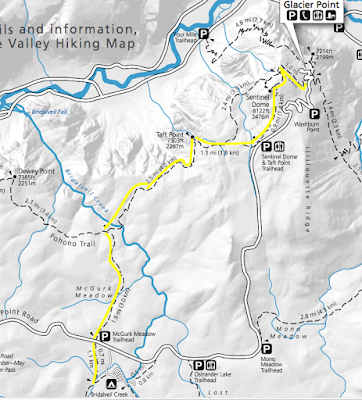 It was a gorgeous ride though. We  rode through McGurk Meadow and then on to Taft Point. At one point, we went past a sign that said Glacier Point 7.0 miles. After what felt like about 2 miles, we came upon a sign that said Glacier Point 5.9 miles. Both my husband and I commented that that had been a long “1.1 miles.” This was our first warning that the trail mileage was a lie and this was going to be a long ride. Luckily, there were a few streams to stop at for water. 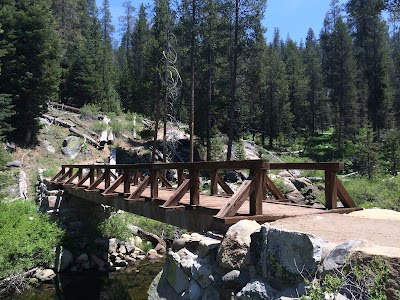 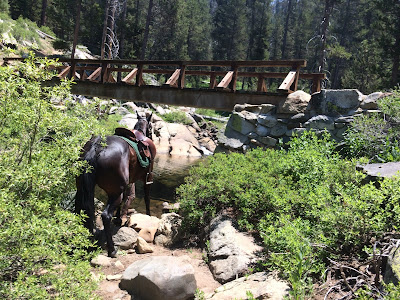 We reached Taft Point, but it was pretty busy, so we continued on to Glacier Point. We passed Sentinel Dome along the way. Taft Point and Sentinel Dome can be reached by short hikes from a roadside parking lot, so we also saw a lot of hikers along this stretch. The final bit down to Glacier Point went well except for one point where Nilla decided to barge off the trail and got caught in a wire. I don’t know why there was wire running through forest, but there was. I managed to hurl myself off of her and my husband and I were able to get it off her legs. Luckily it wasn’t barbed wire and she didn’t panic and the many, many ways this could have gone so, so badly didn’t happen.

We finally got to Glacier Point and tied the ponies up to eat lunch. If you’ve never been to Yosemite, go. If you’ve been, but haven’t been to Glacier Point, you should go. The view is spectacular. Yosemite Falls, El Capitan, Half Dome, and Vernal and Nevada Falls can all be seen from here.

And as amazing as the view is, the picture I got of a squirrel begging us for a cheeto is even more amazing.

We got back on the ponies and posed for pictures in front of Half Dome. Then we had a long ride back to the campground. 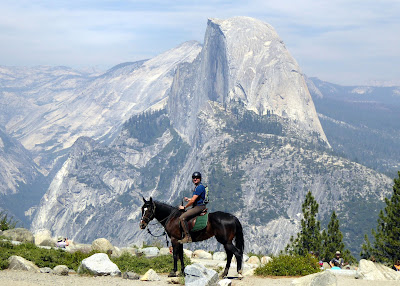 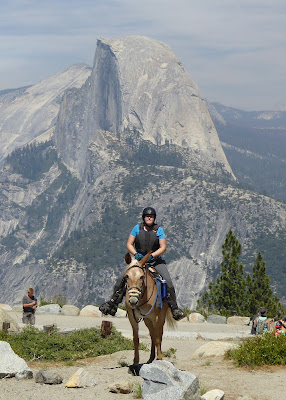 On the way back, we passed Taft Point again and stopped this time to check out the view. It was also pretty great.

What was really cool though was the group of tight rope walkers crossing the Fissures next to Taft Point. Here’s what the set up look like from above: 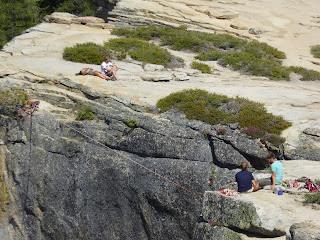 Yes, that’s a tightrope strung across a fissure in the cliffside. So it’s a tightrope across a void that is thousands of feet from the ground. And people were walking across it. While this man technically has a safety harness on, a fall could still be fatal given that the beginning and end of the top are close to the cliff side so a slip and swing could send his head smashing into the cliffside. Just watching it made me nervous. It was amazing though. 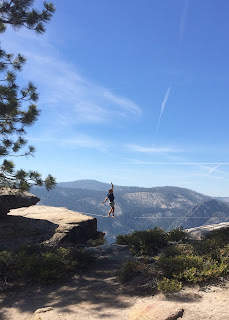 We still had a lot of miles to cover to get back, so we could only stay to see the one guy cross. The trails were so pretty though. We went through a lot of changing geology on this ride. Some parts were wide shaded trails through the pine forests, and others were scrambles over granite rock. 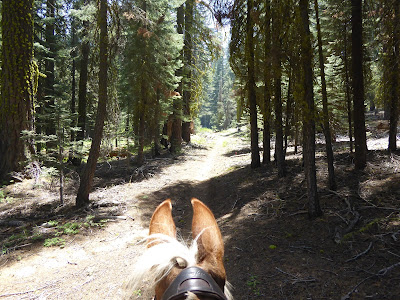 We finally made it back to the campground and the gps tracker said we had gone 19.8 miles, which is a lot more than we planned for. We were all pretty tired and hungry. The ponies were lucky though and got to get sprayed down from the hose. We also got to take a shower with our solar shower. It felt so good to shower and get all the dirt and sweat off. Then we had chili in bread bowls for dinner. Then we went to bed and watched part of a movie before falling asleep. It was a really long, but really great day. 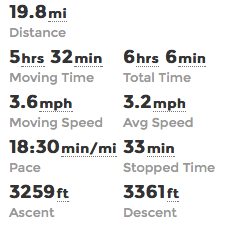