On Wednesday, I took the day off to go with my barn friend to Alice’s restaurant. I’ve ridden there before, but she hadn’t. The ride to Alice’s goes through one of my favorite parks: Wunderlich. We started out at the mostly empty parking lot, which boded well for the day. The park and the restaurant can be insanely crowded on the weekends which is why we decided to go on a weekday.

I haven’t been to Alice’s in a long time because the connector trail from the Wunderlich parking lot to the upper half of the park was closed due to a landslide. they reopened it only recently and with a caution that equestrians might find the trail challenging. I figured we’d go out and if we couldn’t make it to the restaurant, we’d just turn around and it’d be a nice trail ride either way. Because I knew where we were going and I have a really good sense of direction, I didn’t grab a map as we left the parking lot. I think this drove my friend nuts as she proceeded to ask me if I was sure I knew where we were. 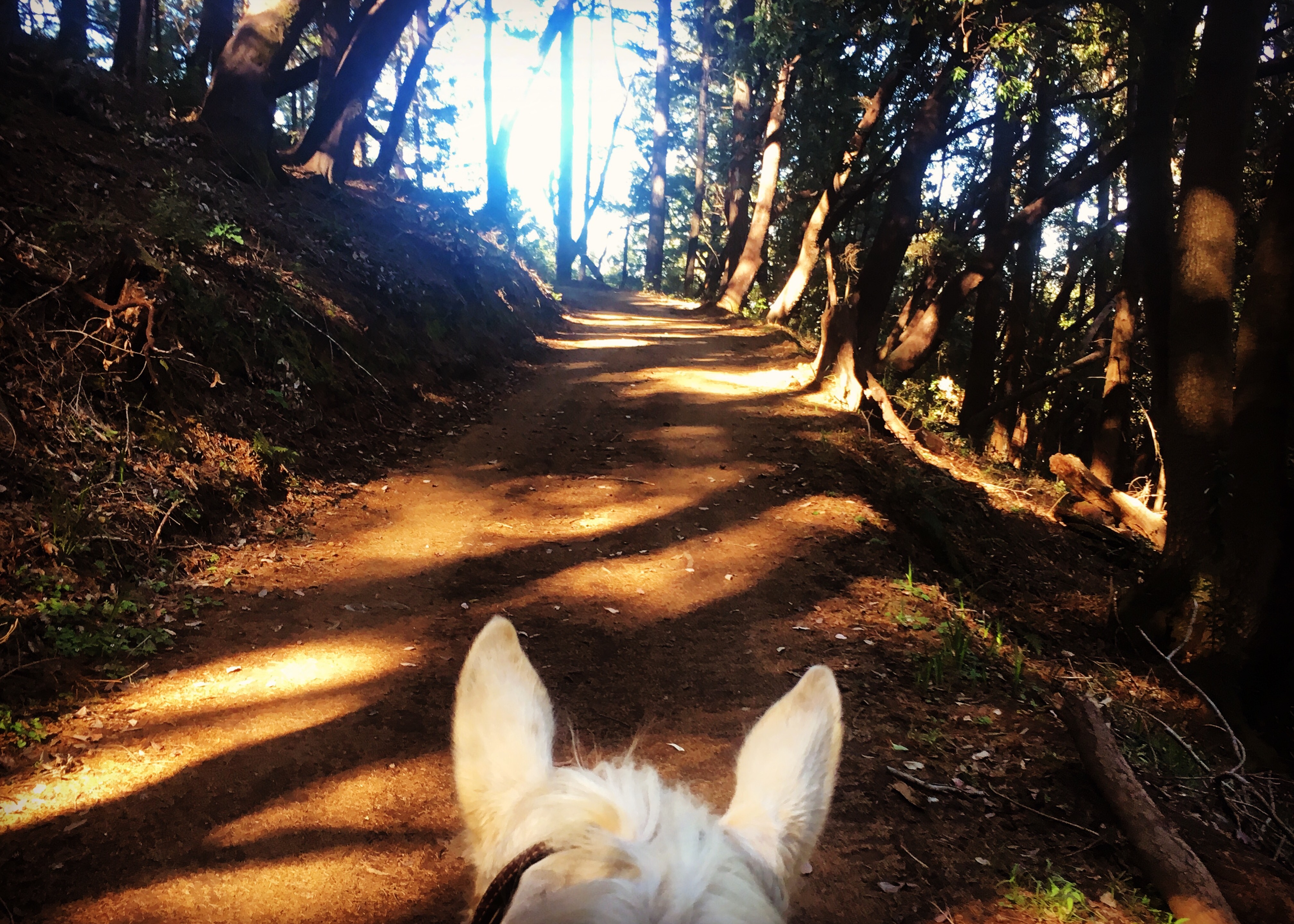 Then we got to the section of trail that had been destroyed and it was indeed challenging. They couldn’t repair the trail and had to build a new trail instead. The new connector was intensely steep. Levi kept trying to turn around because he was convinced there was no way this was meant to be scaled. I got no pictures of this section because I was too busy trying to steer Levi every single step. Since I’d never been on this trail before (because it never used to exist) I made the mistake of saying I didn’t know where we were for a moment and I think my friend thought we were lost. No worries though, despite all their concerns we were not going to die from climbing hills or get lost.

We made it to the restaurant and it was surprisingly busy for a random weekday. We lucked into the last post on the patio so we could keep an eye on the ponies while we were eating. 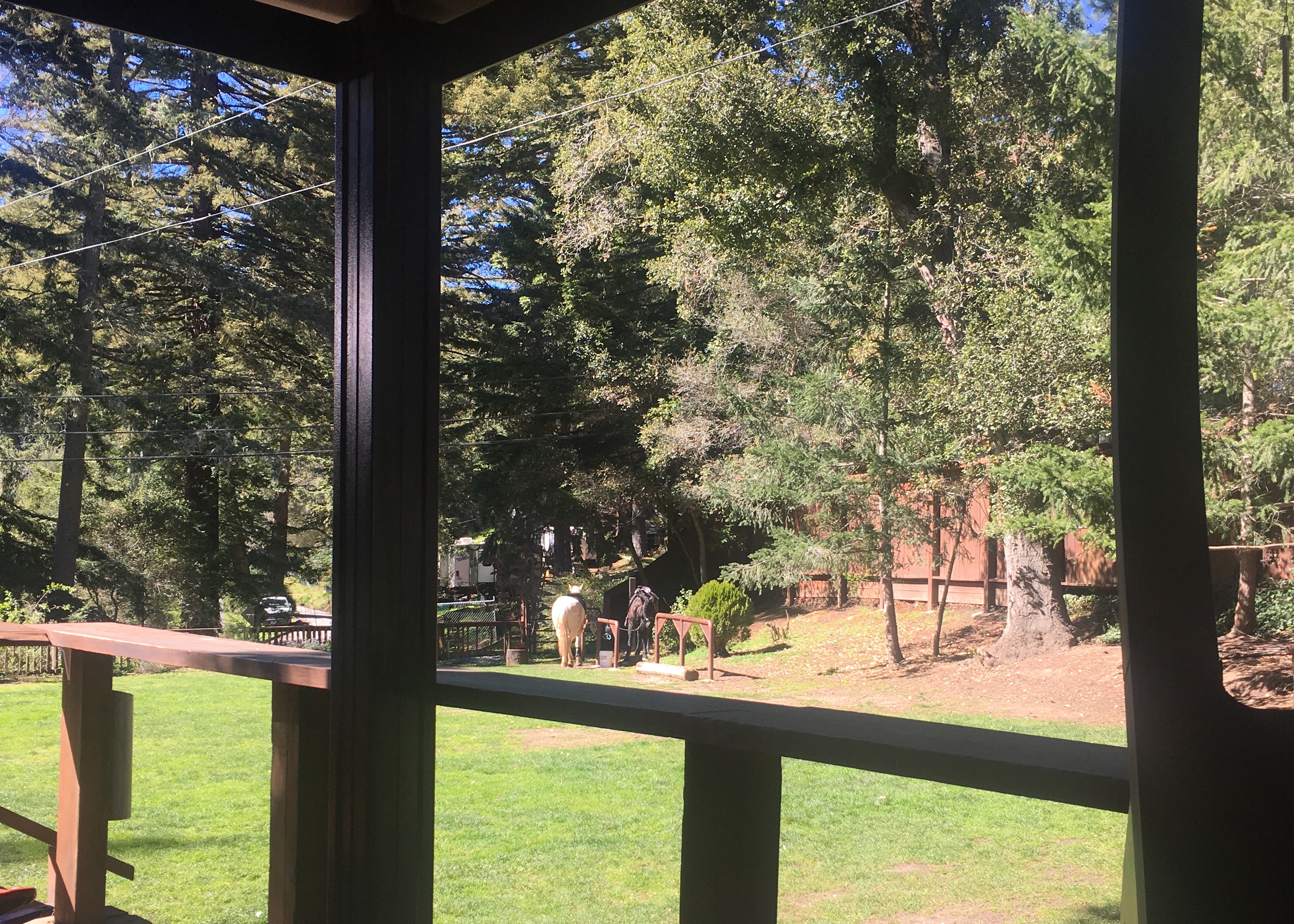 The view from our table

Alice’s is great for having nice hitching rails for the horses and they’ll bring you a bucket of water for your horses. When we asked for water, the busboy who was sent to help us was very concerned that the water coming out of the hose was a bit warm because it had been sitting in the sun so he went and got ice to add to it. He was being too nice for me to explain that horses don’t need ice, so I just took it. Levi though the ice was a fun new addition to his water. Devro thought the bucket was terrifying and refused to drink from it.

Once we’d finished lunch, we let the ponies graze for a bit on the lush green lawn. They were quite happy with that arrangement. 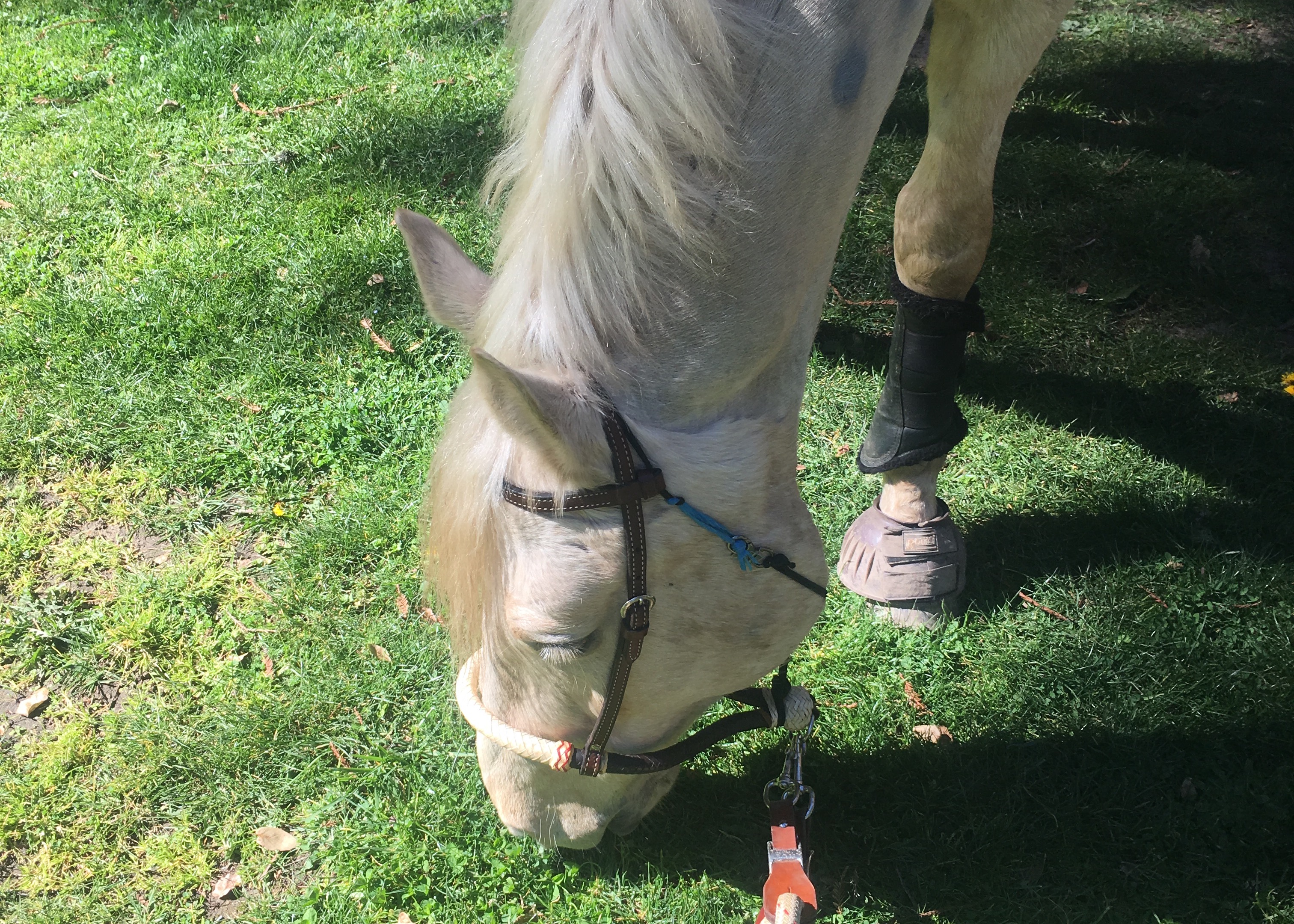 Then it was back on the trail to go home. For the steep section, I got off and hand walked Levi down the trail. Even hand walking was difficult and my feet were skidding down the path as we went. I don’t know why they built the new connector like that as it’s not even easy on hikers, let alone riders. Of course, the fact that the sides of the trail were still layered with straw from the construction made it much more difficult for me as Levi kept weaving side to side trying to snatch mouthfulls of straw as we descended. 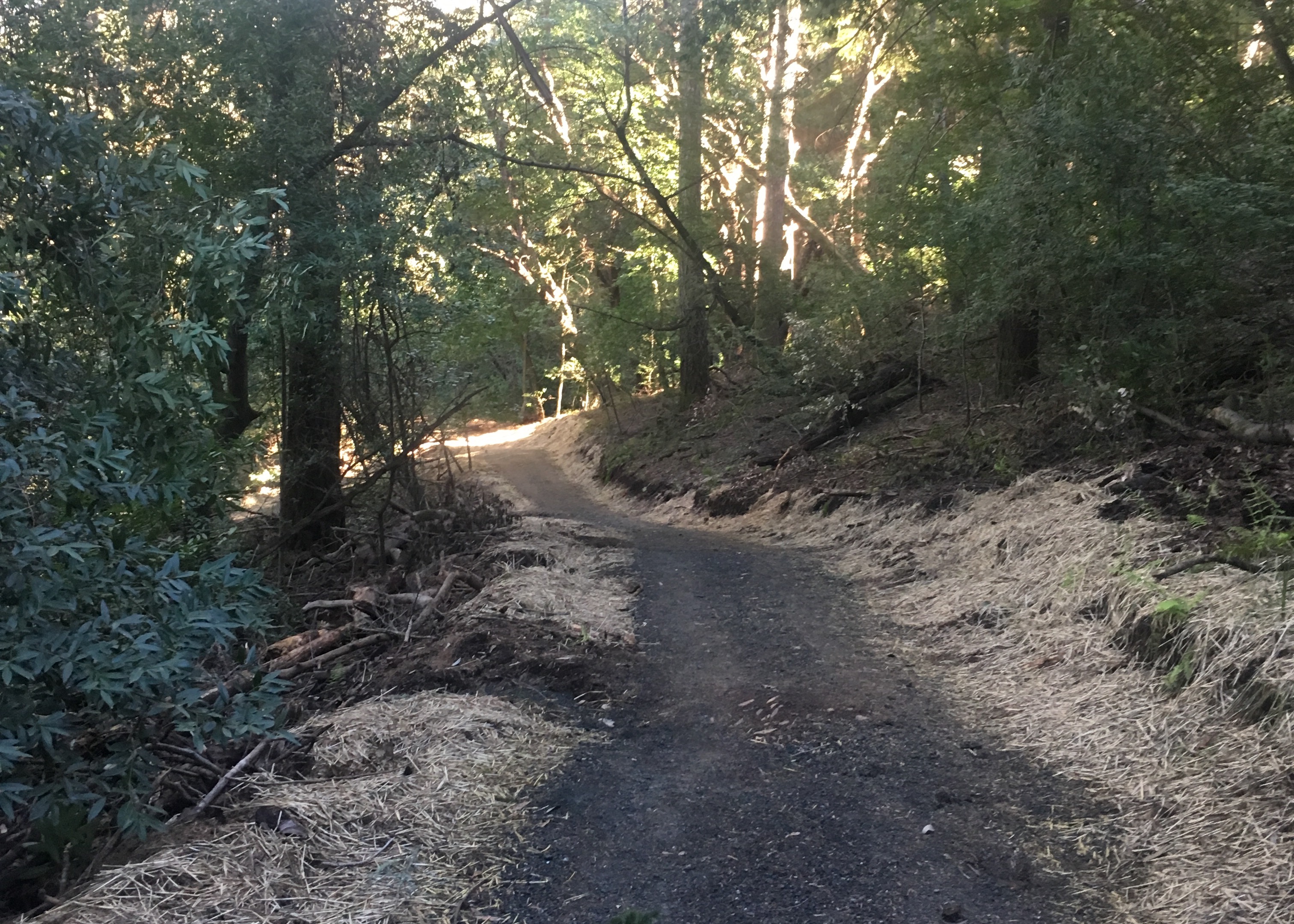 This was from a flatter section near the end.

We took a different route coming back so we could check out the views from the meadow. One of the things I love about the bay area is all the open space. There are so many protected open spaces and parks, that it’s possible to be minutes from the heart of Silicon Valley and yet feel like you’re out in the wilderness. 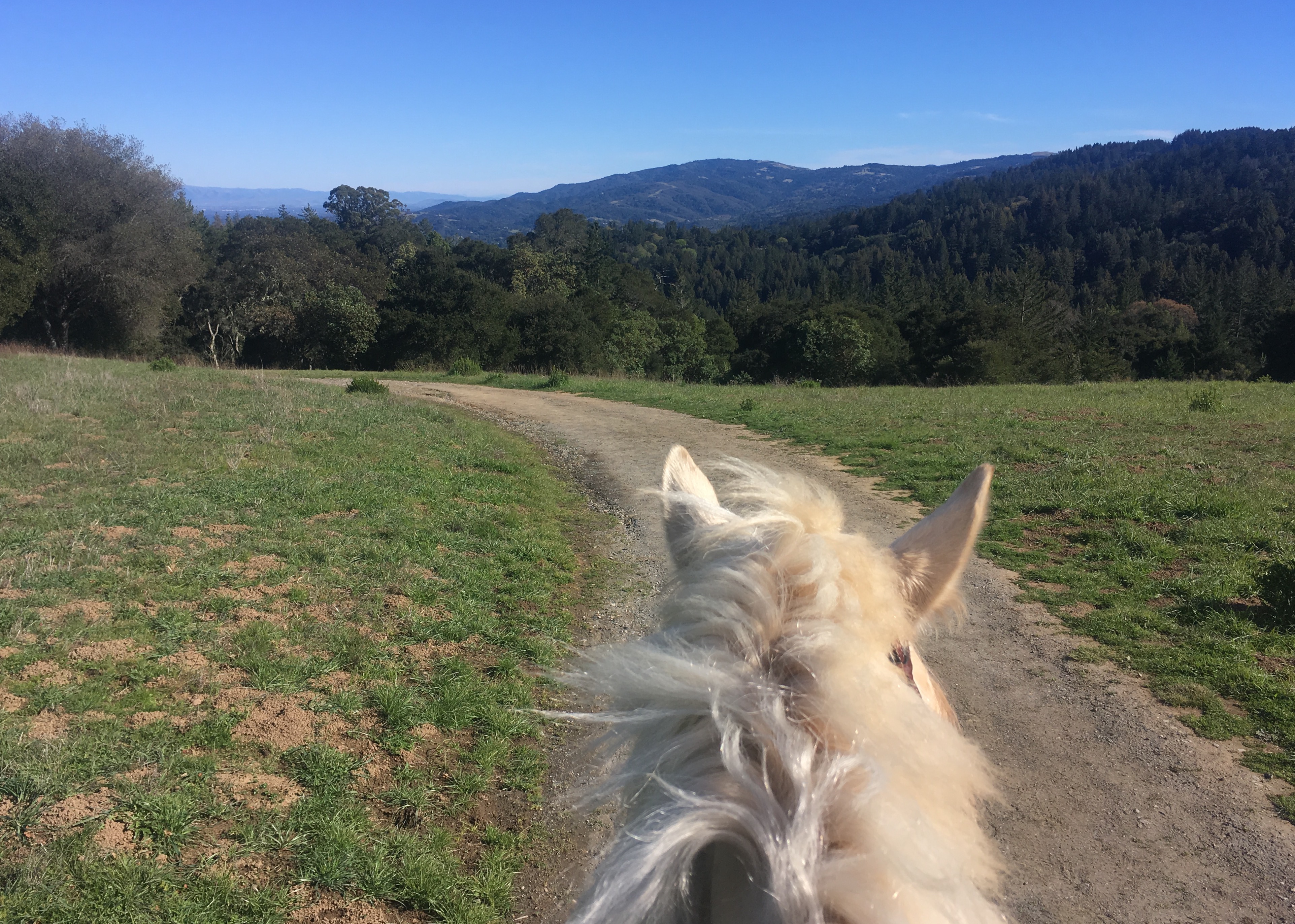 Because Devro’s still young and Levi has foot issues, we kept to a walk for the entire ride. Which meant it was a long ride. We didn’t get back to the trail until about 4pm. Then it was time to load up and brave rush hour traffic to get back to the barn. It was a lovely day. I wish I could spend every day riding out to lunch. Maybe one day.