For Day 3, we didn’t have access to a cross country course, but Ashley set up longer lines and courses designed to test the same skills as much as possible. This day’s goal was forward and galloping to jumps. Since Levi was being so good, I bumped up to the BN group for this day. I was also able to ride him without a bit. Ashley actually really hated that idea. She would prefer a real hackamore instead of the bitless micklem configuration. But Levi hates being jumped in a hackamore and I wanted to give his mouth a break after dental the day before.

I see her point, though. If it were any horse other than Levi, I wouldn’t want to jump using this configuration. You have very little control of direction or getting their head up. But Levi is sensitive enough to be ridden without a bridle at all and he’s happier without a bit.

Once we got warmed up it was straight into the theme of the day. We did a line of 2 crossrails going through it at a normal pace, counting our strides, then doing a rollback, coming back and getting one less stride. This was tough. For a big horse, Levi is not fast, and he does not like to stretch out. But we managed it. Eugene managed it as well. 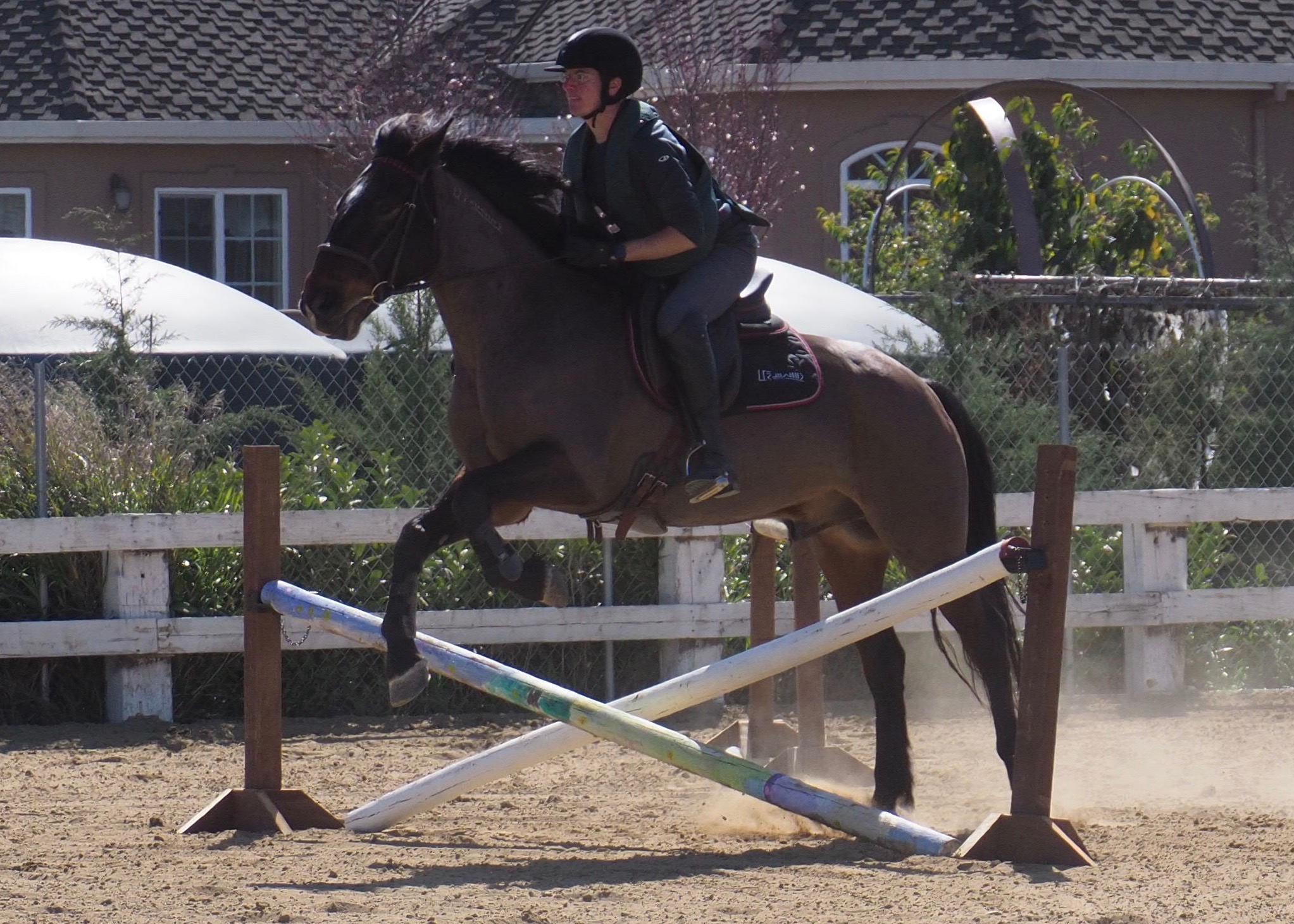 Next we did that same line, then around the corner to a shorter line across the diagonal. You really had to come out of the turn and power forward. 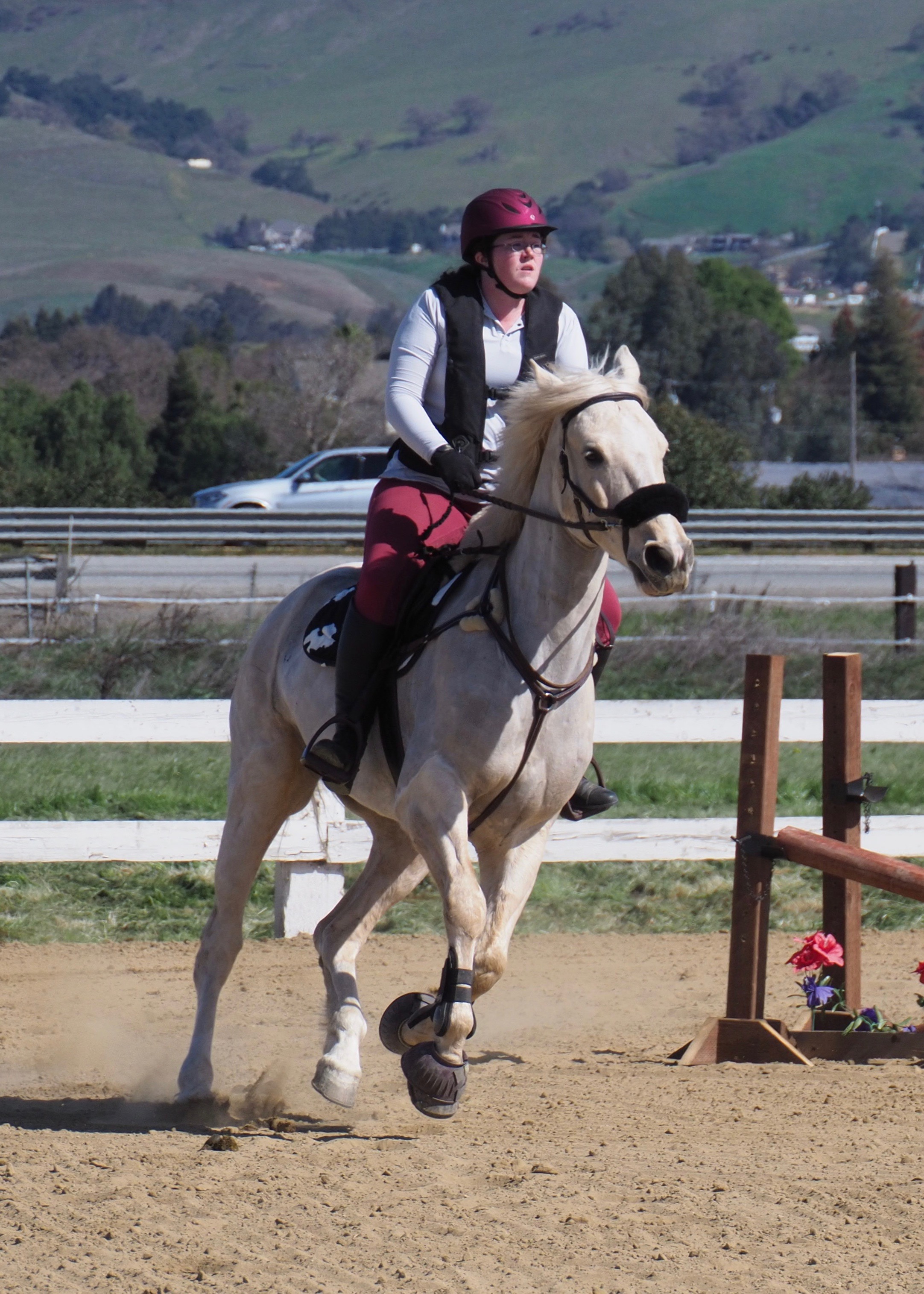 At this point the jumps were just big crossrails, but I was already out of my comfort zone. I like a horse that pulls me forward and Levi really requires me to push him forward. I’m not good at that so we crawl around to fences most of the time. With that day’s theme of
“gallop to the fences,” crawling was not acceptable. And I was internally freaking out already.

My husband, on the other hand, has no fear. We were talking to the other girl in our group after the lesson when we were all washing our horses together and I was telling her I was scared too, but my husband isn’t. His response was I trust my horse and those jumps aren’t scary to me. That was me back in high school. Nowadays, not so much.

Anyway, once we’d done the lines a few times, it was time to make things more complicated. We did the lines then a rollback to the oxer to a bending line to a vertical. Just like with day 2, these were not easy exercises. The second time we did that rollback to the oxer Levi landed on the wrong lead over the last jump of the line. As I went to switch leads, Ashley yelled to just keep going on the wrong lead and to get even more power and balance. After I finished, she explained that instead of going slower because they’re on the wrong lead, they need even more power to get over the jump. You just have to balance them more through the turn.

Next, Ashley added a Swedish oxer to a line of vertical to rolltop. The Swedish was on a really hard line off the rail. Ashley walked all the way out to explain where she wanted us to turn and how to approach the jump. It looked fine watching her do it. It was a lot harder when you came around the turn and tried to line it up for yourself.

and if you stare at the ground, it’s even HARDER

Ashley stopped them and made them start again. And they did much better the second time.

Then it was my turn and I made the mistake of telling Ashley I thought Levi would refuse the rolltop. To my credit, he’s refused every other astroturf covered rolltop he’s ever been presented with. But Ashley was furious with me for doubting him and also for the whole “what the hell does it matter.” It’s a clinic, if he refused, we’ll fix it. Which is true, but since I am not that good of a rider, my concern with refusing is not so much the refusal, it’s the falling off when my horse lawn darts me off over his head while refusing.

The Swedish oxer came up just as awkwardly for us, and we took the rail down but we didn’t get to restart because Ashley wanted us galloping down that line to the rolltop. I think the idea was we’d just go so fast he couldn’t possibly refuse. But that didn’t mean he wasn’t concerned about it. So he launched himself over it. Like popped me out of the tack, jumped the standards, complete overreaction to this jump.

And then we got to do it again and again, because conquering your fears just once isn’t enough. Finally, we were done and I could collapse in a panting heap for a few minutes while other people did things. Ashley changed up the course and had us do the rolltop backwards to the vertical, then a turn around to a different oxer and back over the rolltop going the right way. My husband went first. 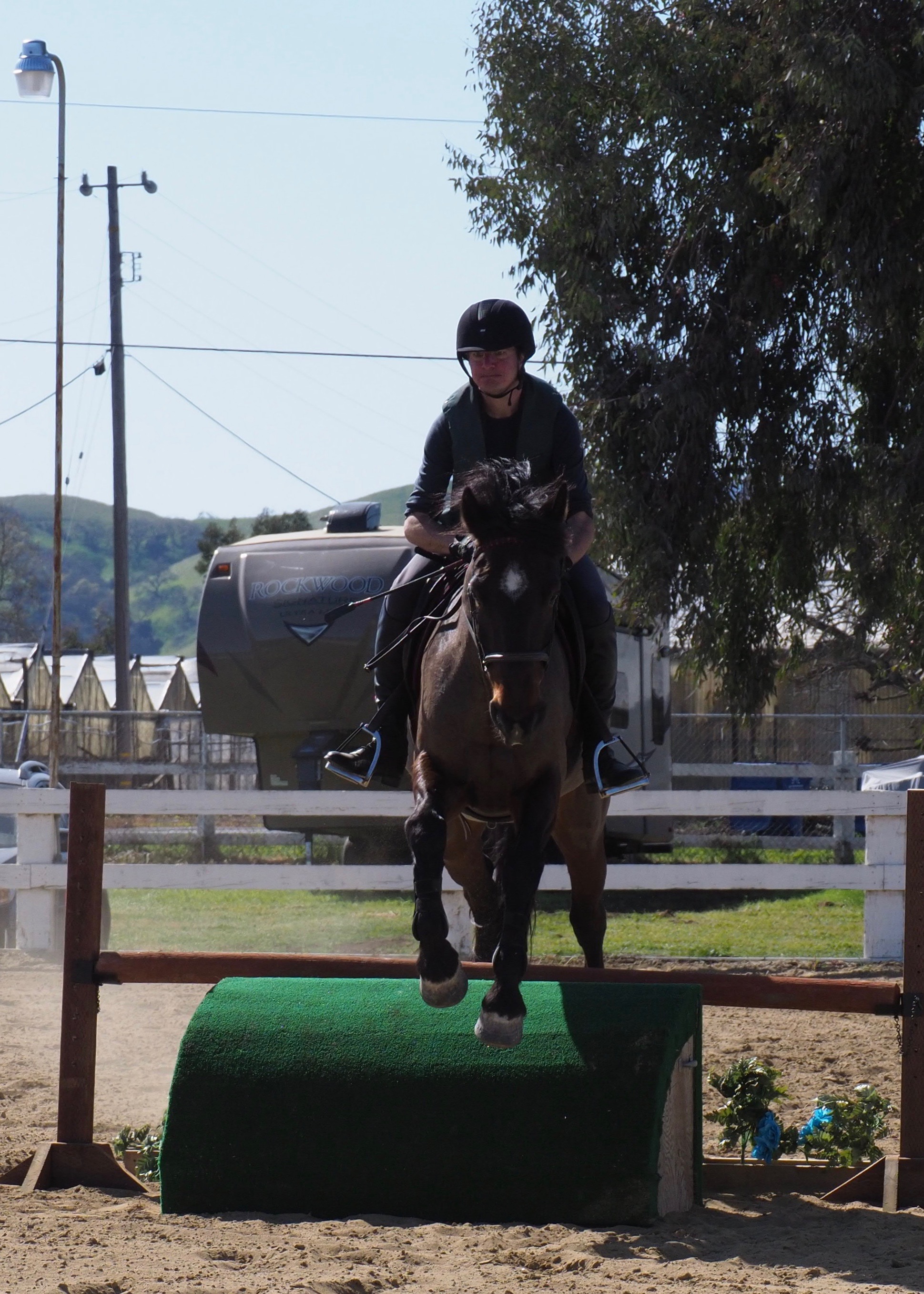 Eugene will jump pretty much anything if my husband tells him to, but even he looked twice at the backwards rolltop. So when it was my turn, my husband warned me to really push Levi coming out of the corner to get him over the jump. However, Levi didn’t notice that the jump was scary until he was already going over it. Literally. You can see the moment he realizes he should be concerned.

Wait a second… what is that?

I have to keep my eyes on it the whole time

Megan from A Enter Spooking had come to watch the clinic and was nice enough to take all these pictures. Her comment was that one of these times Levi was going to kick himself in the face. He really likes to tuck himself up.

After we did the rolltop the correct way, we were supposed to turn left and come down a line of 3 jumps. Except none of those jumps were actually in a line with each other. They seemed like they were when you were standing there, but when you made the turn to the first jump, you realized that it was more like 2 different bending lines in a row, but you’d also have to kinda slice them.

I watched my husband do the line and they weren’t very straight, but I just figured they were wiggly and didn’t realize the line was the problem.

My husband said he could see by the look on my face when we made the turn that I was going through the same mental process as him: “what the hell do I do with this?” We were so wiggly and messed up that the third jump, which had a terrifying cone in the middle of it, was just to much and Levi slid to a stop.

We came back around, I lined up better and he made sure to clear the hell out of it.

After that, I asked if I could elect to be done on a good note. I am not in good shape and my muscles were quivering and I was worried that I’d mess something up by not being able to ride well enough. I wanted to end feeling as good about Levi as I was feeling at that time. I think Ashley thought I was trying to get out of doing the other rolltop so she said I had to do that first. That’s fine, I really wasn’t worried about it at that point. I might – gasp – have a little faith in my horse. He was a little hesitant the first time because I wasn’t riding as strongly (and he was also a bit tired by then too), but he went over it and even better the second time.

Kate wanted to use Levi for a few minutes to try out a dressage saddle so I sent him off with her and then went to watch the end of my husband’s lesson. They did the cone oxer to the rolltop.

When the jumps were initially set up that morning, our brown roll top had been set as a skinny bounce. Ashley said she wasn’t sure what groups she would have do that and my husband volunteered to try. After doing the combined rolltop a few times, she had him do the one as a skinny first.

Skinny – the pole on the ground is also set as a guiding line, it’s not in the landing zone

Then she set up both and had them come around and trot in. And Eugene was like, WTF? The first time through he tried to stop in the middle and then sort of crawled over the second one. Then he kept trying to jump either the left or the right guide pole instead of the second jump. Because he would do either one, Ashley was very clear that he wasn’t running out, my husband simply needed to guide him straight over the second jump. But it’s really not easy. 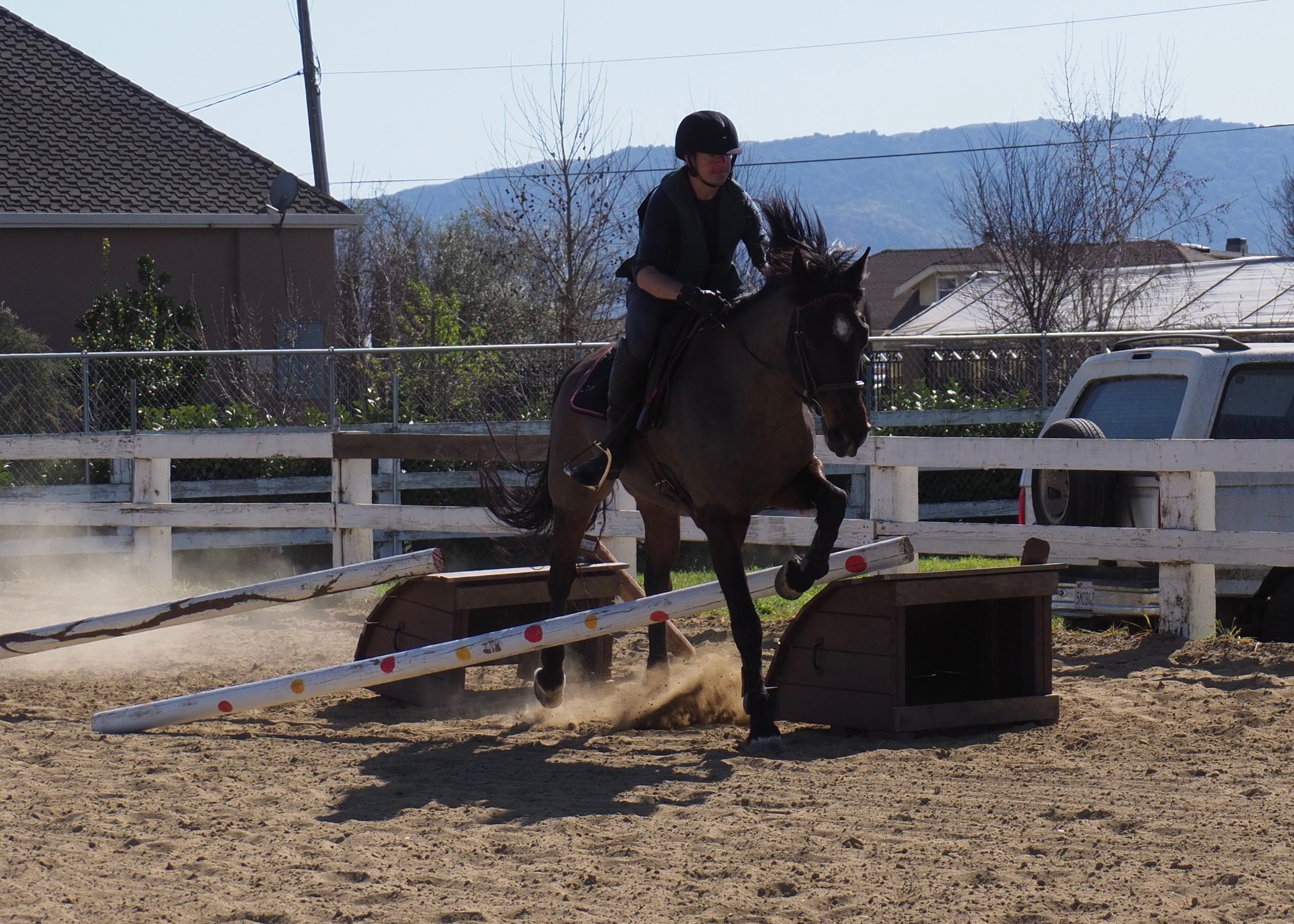 “and then a step to the right…” 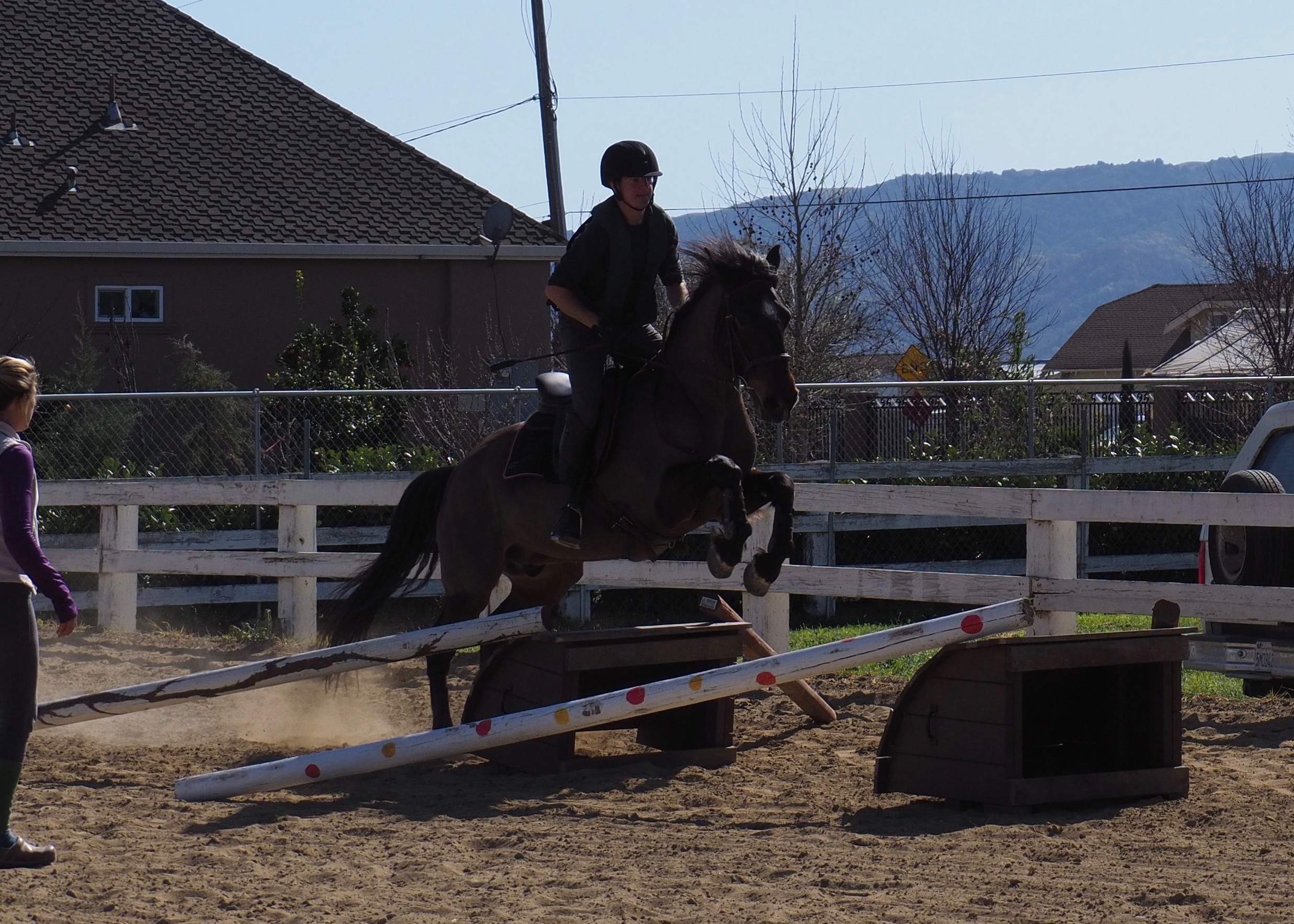 “With your hands on your hips, You bring your knees in tight”

“Let’s do the time-warp again”

He’s such a good little horse. He tries so hard. Levi is flashy and pretty, but Eugene has more try than any other horse I’ve met. That wrapped up the clinic for my husband and we were able to go off and give the ponies hot baths (we do not have hot water at our barn and the sun had come out and made it warm enough for them to not hate us). Then we thanked Ashley profusely, talked a little bit about Vermont (she used to live and train there) and then we loaded the ponies up and took them home.

I would definitely clinic with Ashley again. She’s a tough and demanding instructor, but her insights are great and the courses are inventive and fun. If she’s ever doing a clinic near you, I would highly recommend her.