We arrived at Twin Rivers on Thursday in a downpour. Everything was mud. Or a lake. They were using sand to bank up the temporary barns to keep them from flooding and we saw a lot of people trying to cover their stalls with tarps to keep the rain out. We lucked out though and got assigned to the one permanent barn on the property. It had a real roof and an aisle down the middle and a separate alcove to store our hay in. When I checked in at the office to ask where our stall assignment was, the woman told me to “enjoy that” as I walked out. And we DID. It was absolutely the best.

They were supposed to be offering a schooling show on Thursday, but had cancelled it because of the rain so my husband just went for a brief ride in the indoor to get Eugene some exercise and see how the brand new custom saddle felt. We literally stopped on the way to the event to pick it up from the saddler. To protect the saddle from the rain and his pants from the saddle oil, my husband rode in a towel.

We are nothing if not classy.

We got a hotel for the weekend because I’m not sleeping in the truck in the pouring rain and below freezing temperatures. We went into town to check in, grab some dinner, check out the cute tack store next to our hotel, and then returned to the horse park to blanket and feed Eugene for the night.

The next morning, we awoke to find our truck tire flat and full of nails. Like a crap load of nails. We got AAA to fill the tire enough that we could drive to a tire shop where we left the truck and piled all of our crap into an Uber and arrived at the horse park much later than anticipated. Luckily his dressage time wasn’t until 3pm. We picked the truck up later and they had to replace the tire because it had too many holes to patch. Truck tires are not cheap. Add in the Uber rides back and forth and we paid more for those nails than we did for the event itself. 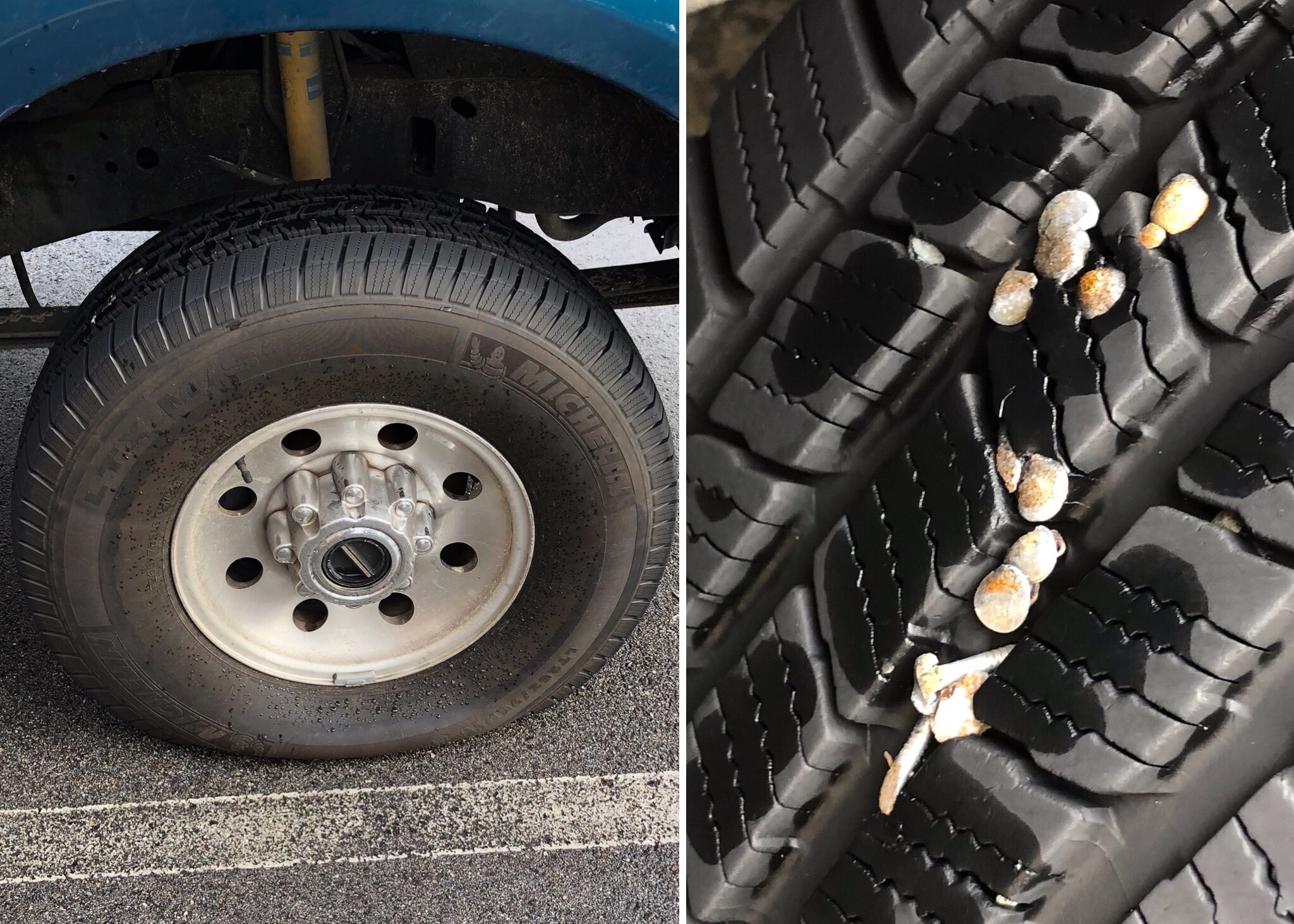 that’s a lot of nails

It briefly stopped raining when we got to the park, so my husband took Eugene out for a ride to let him stretch and get some energy out. I caught this shot of them returning from their ride through the giant puddle that was the road through the stabling area. 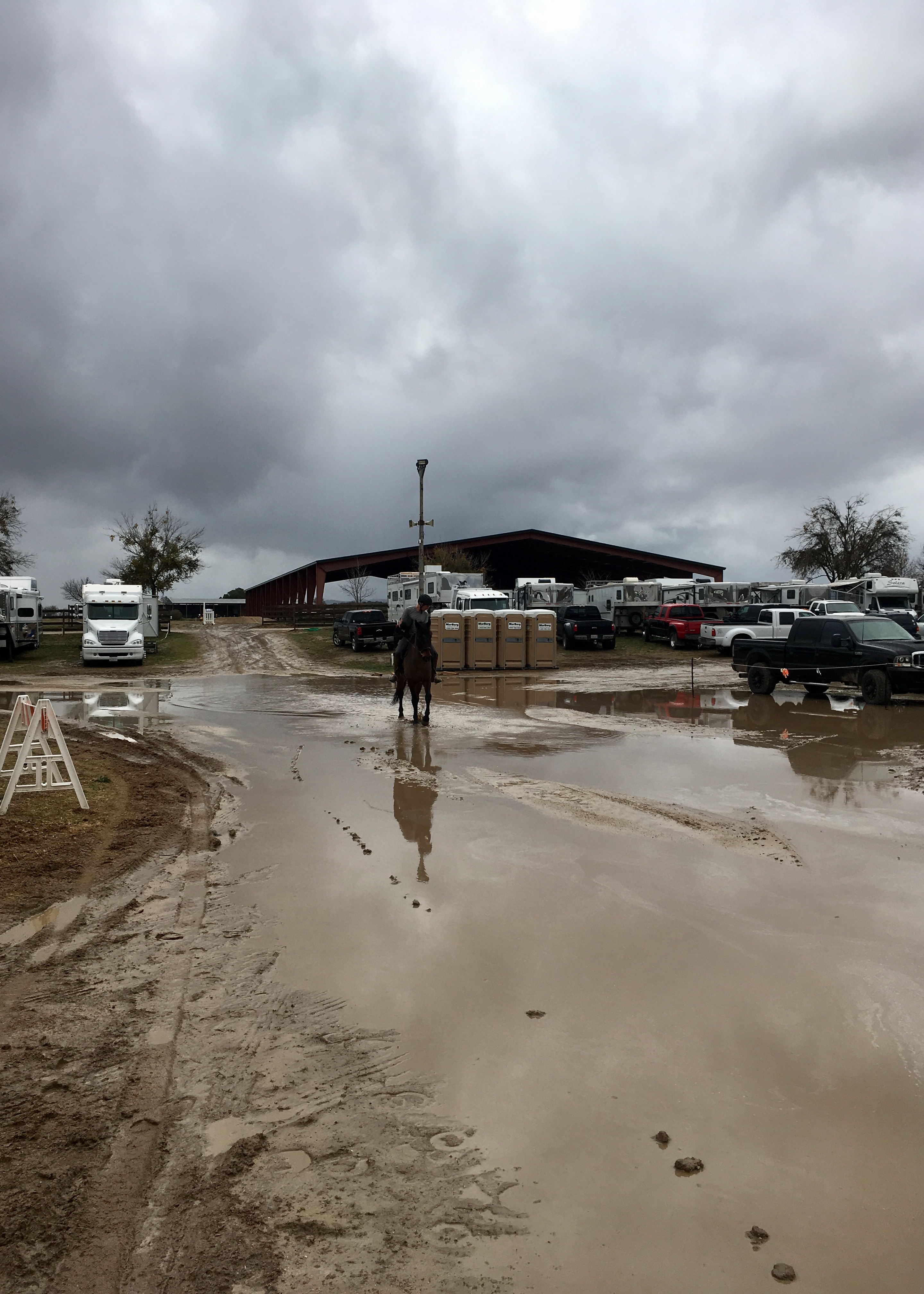 We hung out at the barn, had lunch, and braided Eugene until it was finally time for dressage. The warm up was a lake. Like a giant, mud puddle lake. I watched one horse, approach the warm up, step into the puddle, splash himself, lose his mind and bolt across the entire warm up. The dressage courts were also lakes of mud with puddle islands. There were a lot of very unhappy horses. I watched one poor woman try to enter at A, have her horse slam to a stop at the puddle, spin, re-approach, stop again. She kicked him until he tried to jump the giant puddle, splash-landed in it and proceeded to bounce out down centerline. I told my husband it was actually an advantage for Eugene. He could not care less about getting splashed. While other people were just trying to get around dressage without jumping out of the arena, they could do their test like normal and probably out score out some of the people who would normally do better than them.

Just as they started warming up, the rain returned in force. I had initially walked over to the warm up area without my rain coat, since it hadn’t been raining for a few hours, but had to go back to the barn almost immediately when the skies opened up again. I eventually moved under the tent with the ring steward to take pictures of their test. 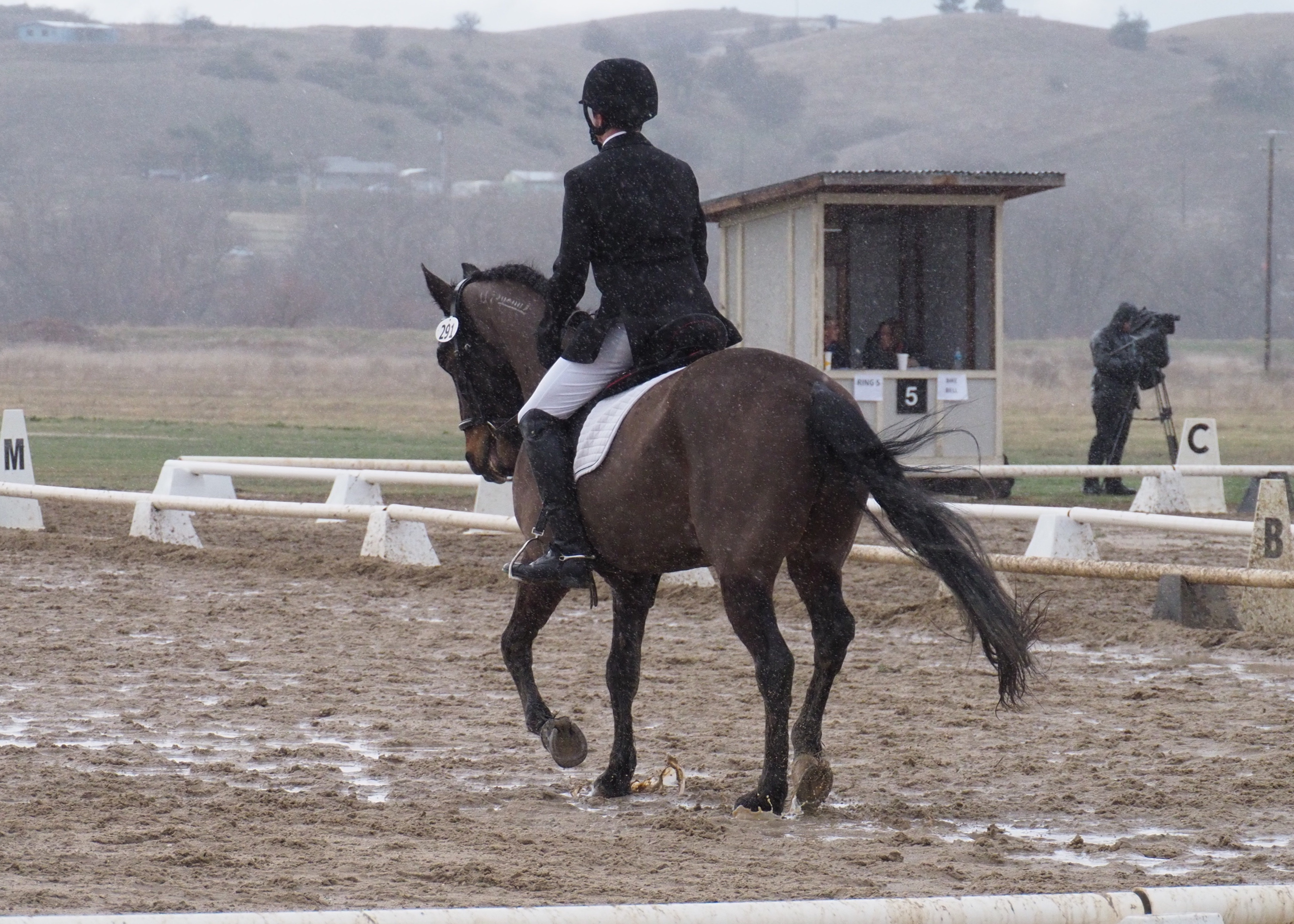 This is about as steady as he gets 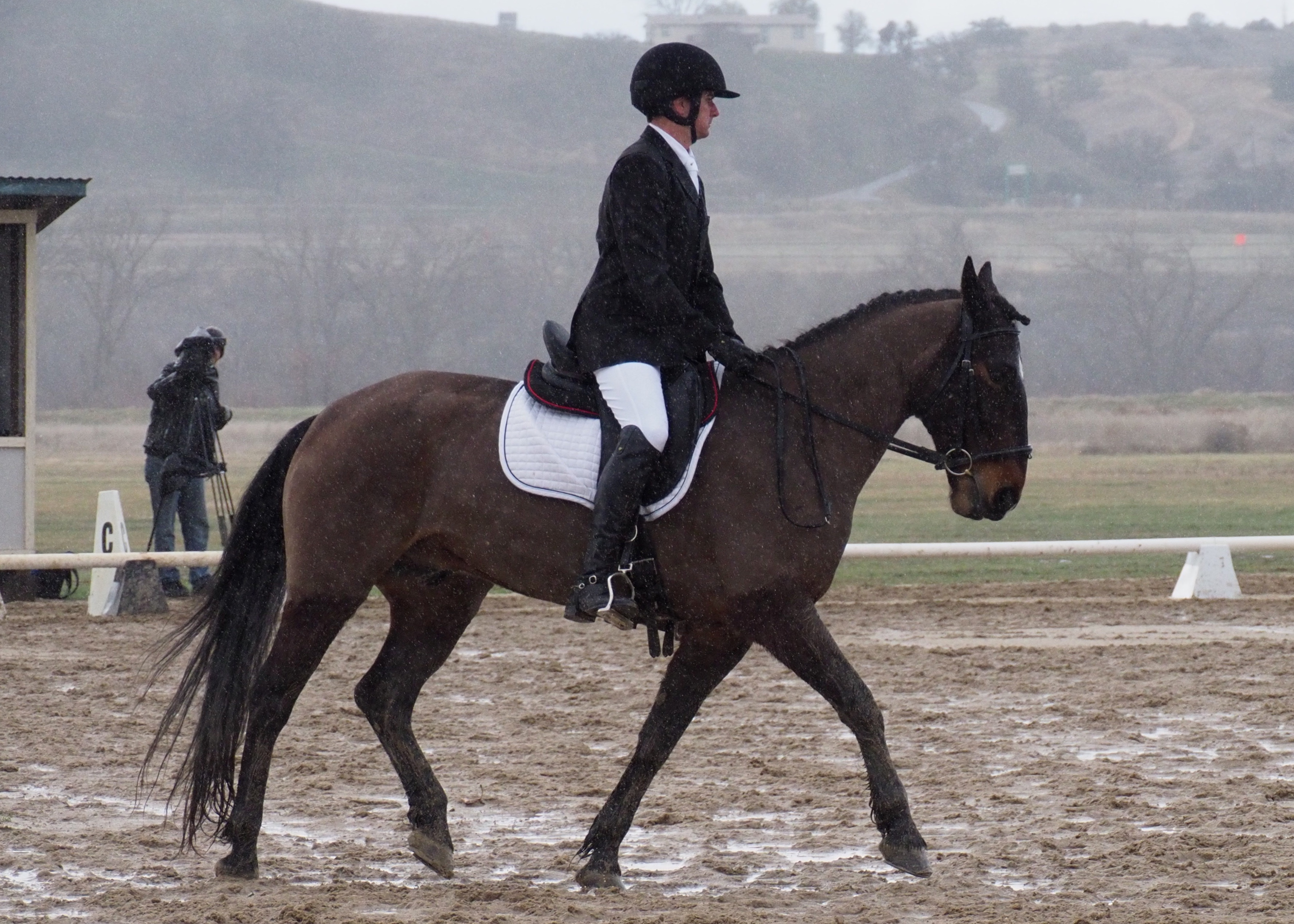 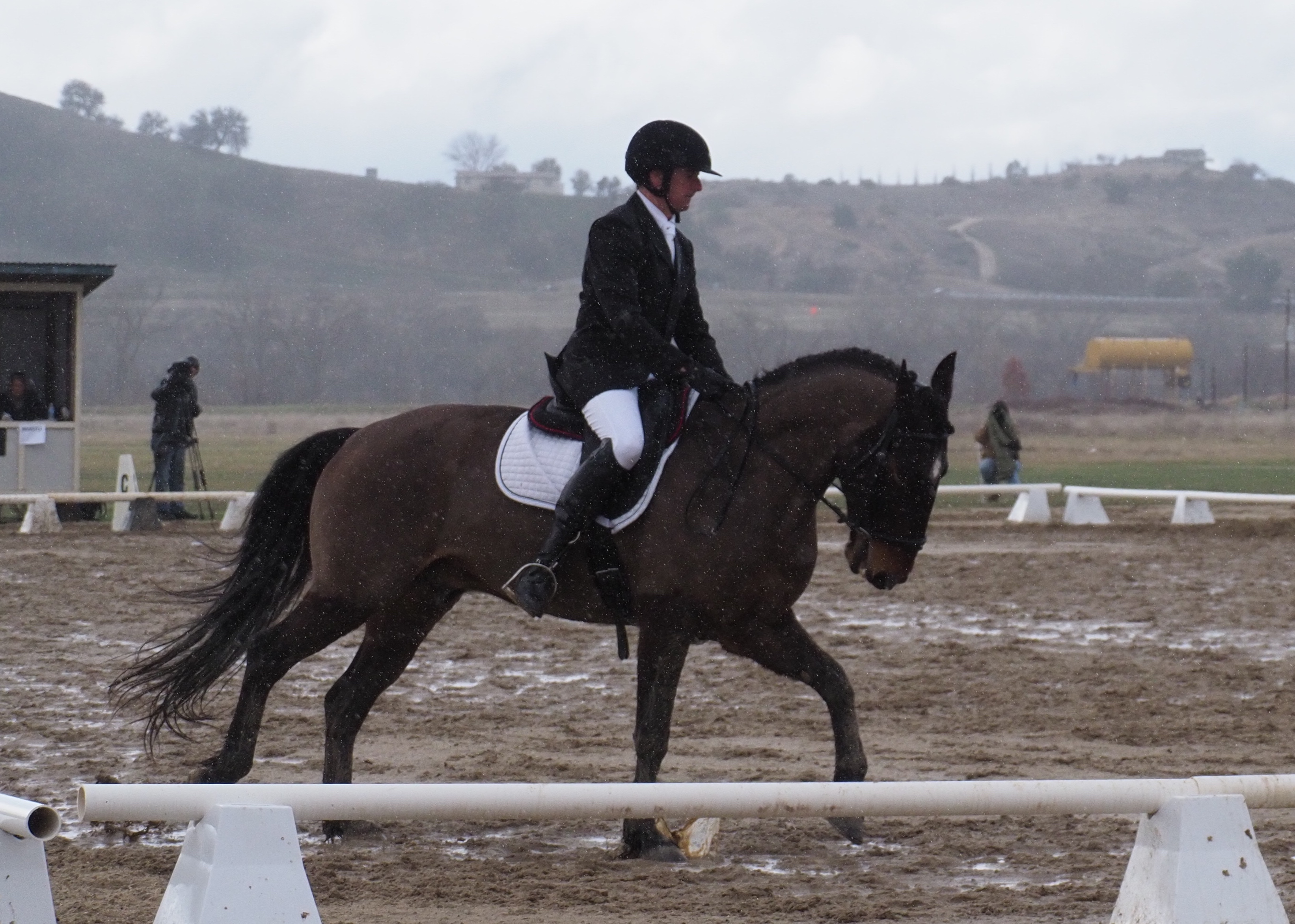 It was a legitimately good depart 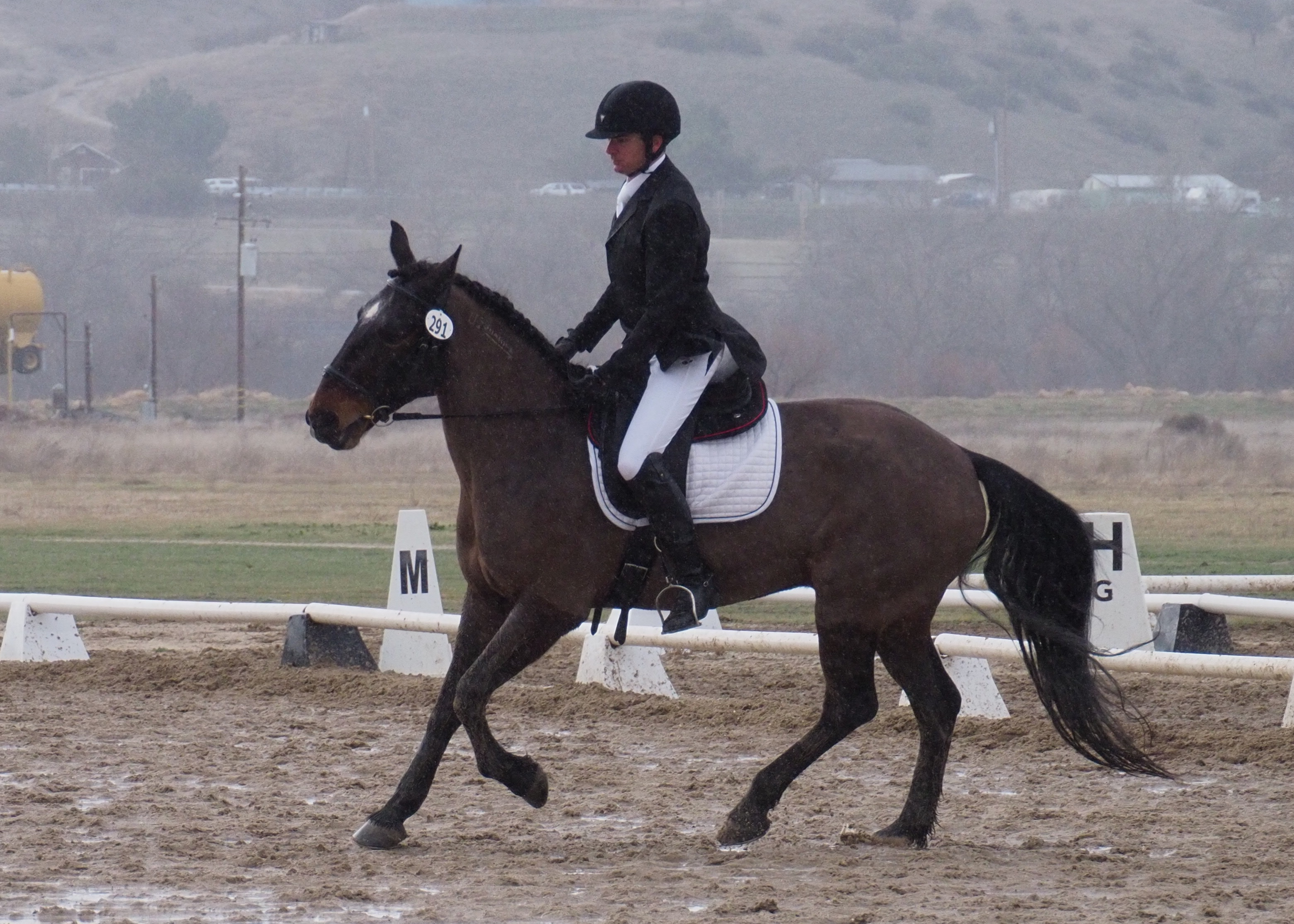 About normal canter for him regardless of mud

5. Between F and B Working trot
Judge’s Comments: “braced in transition”
Score: 6.0 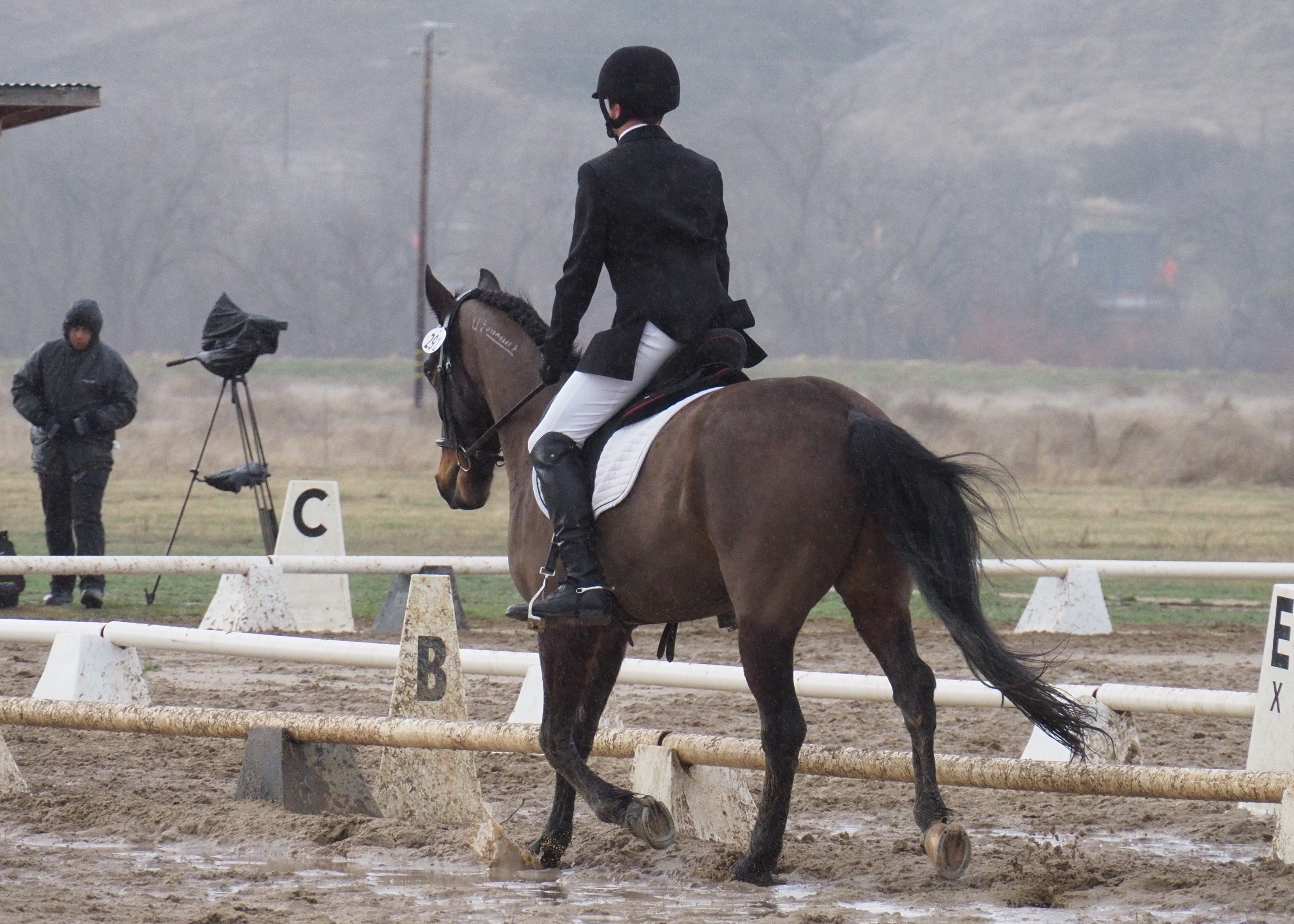 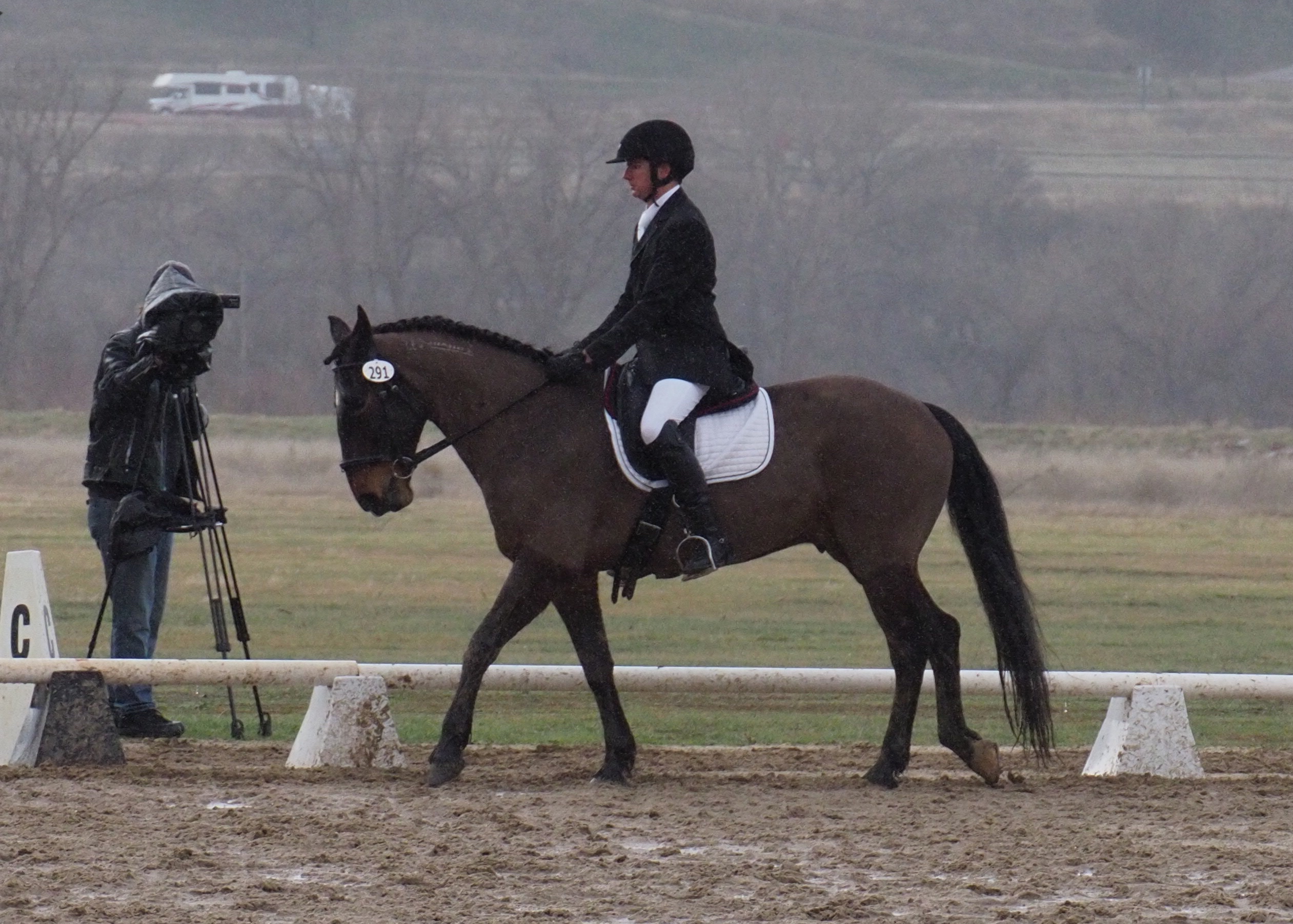 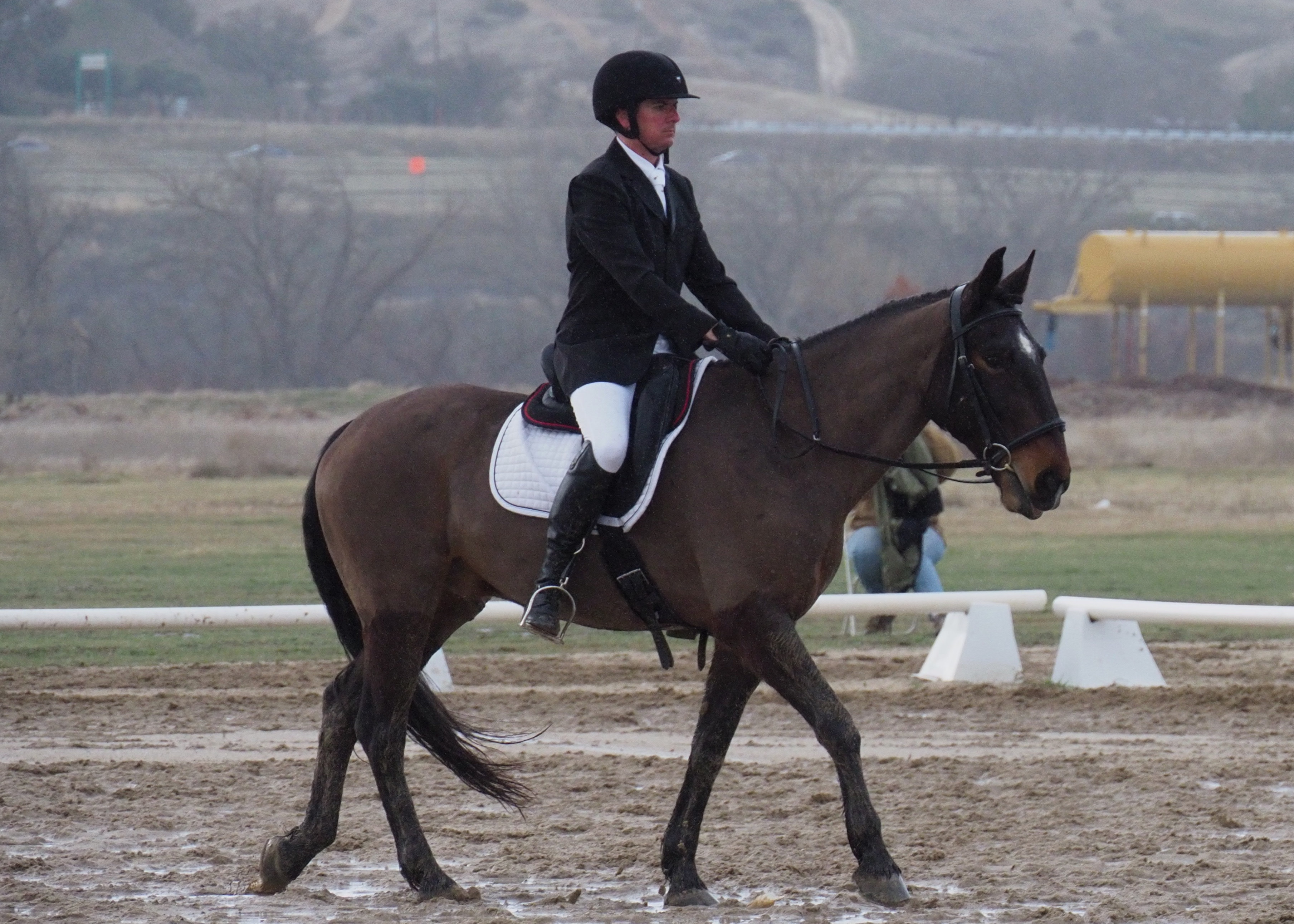 Honestly, this was a generous score 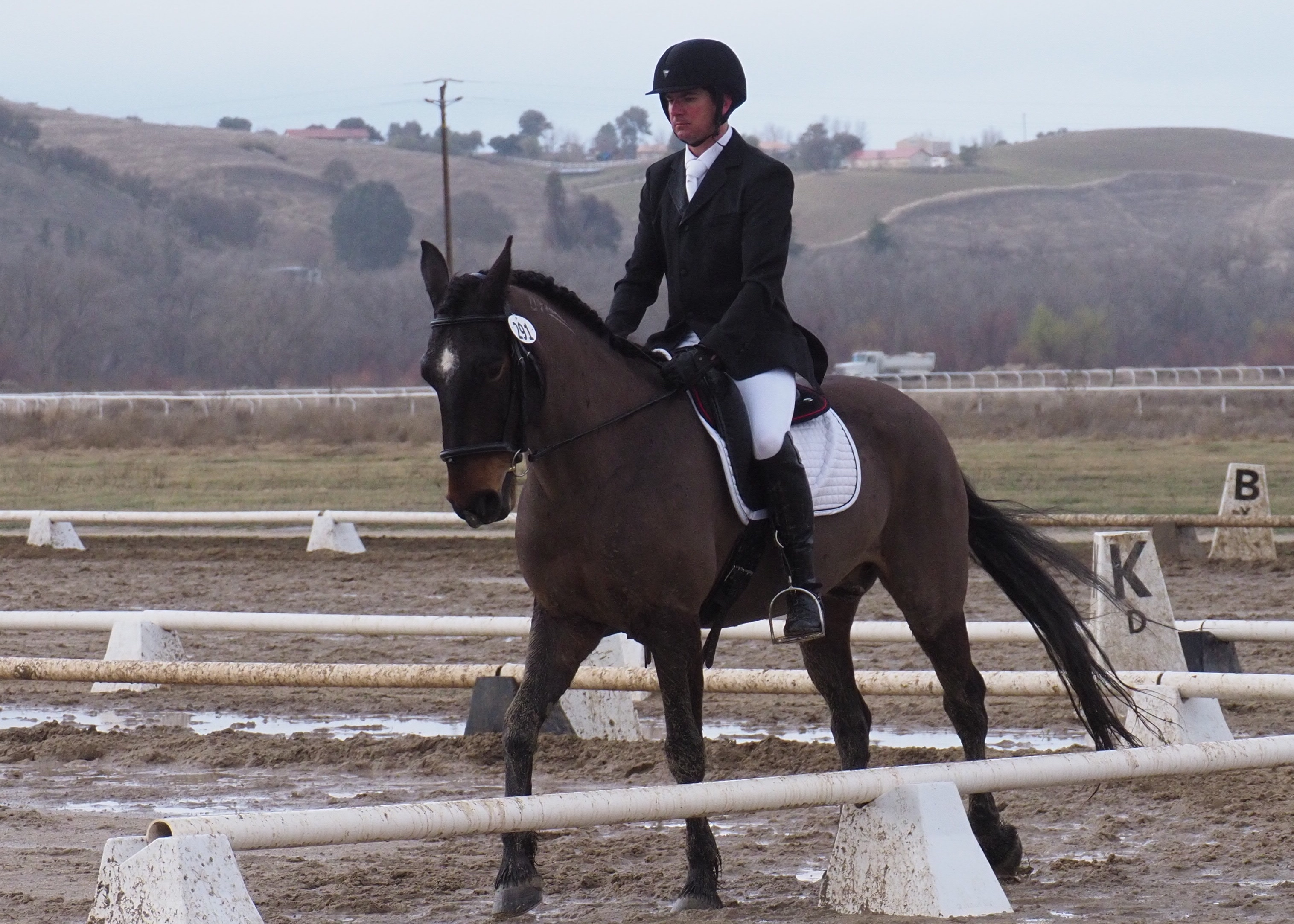 I think it had stopped actively raining by this point 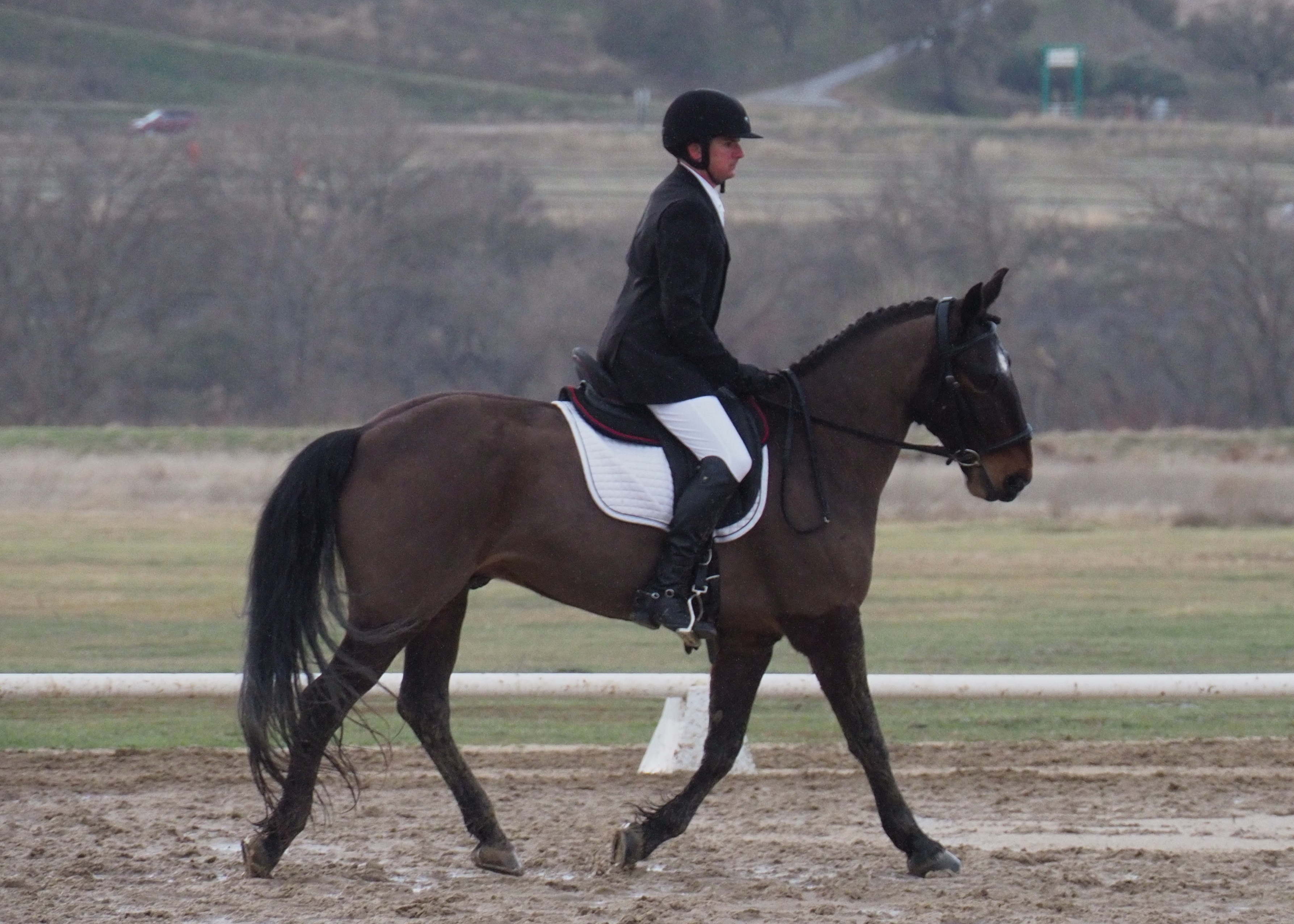 Although he does toss his head, I’m actually pretty sure he was just tripping for most of this circle 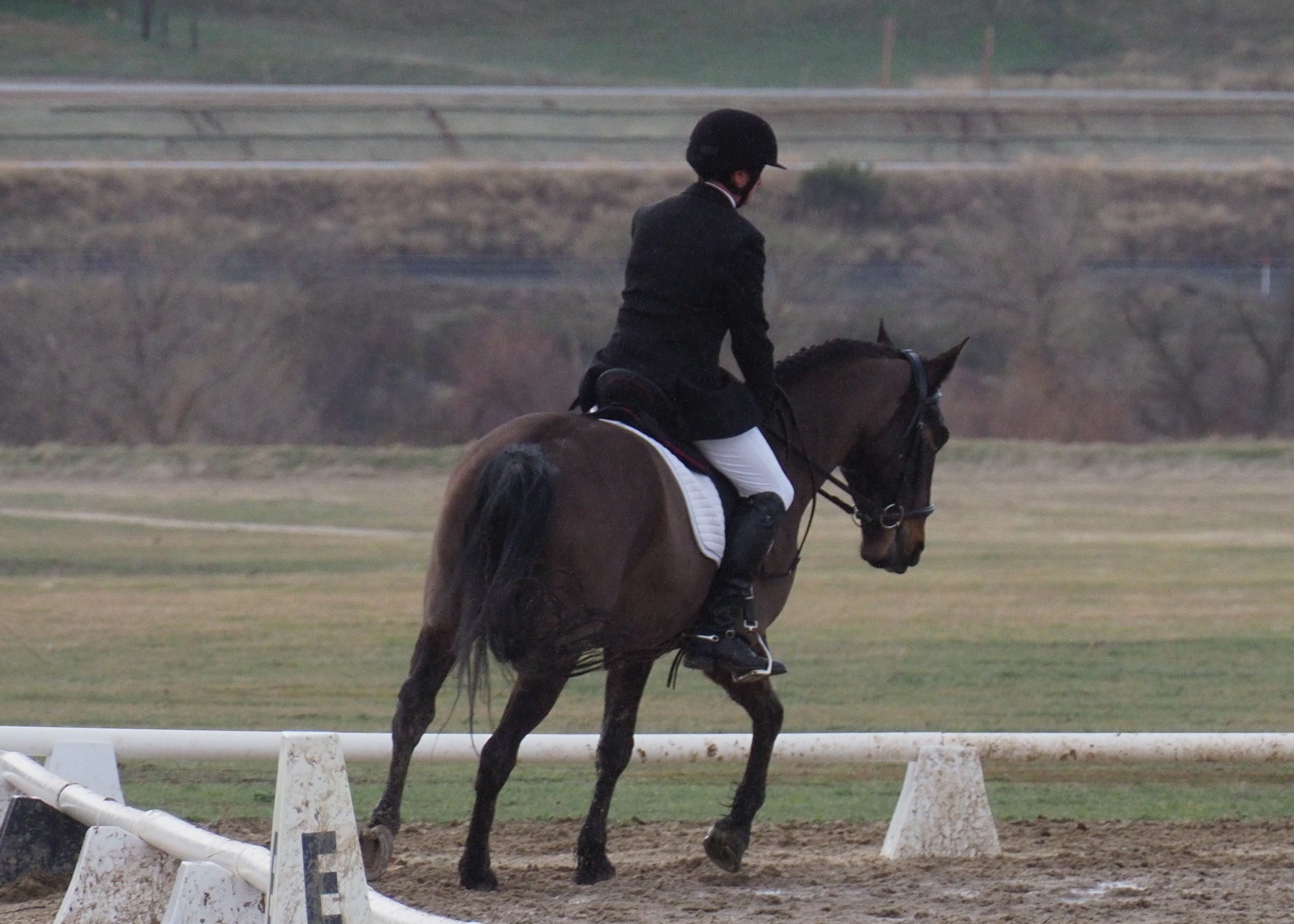 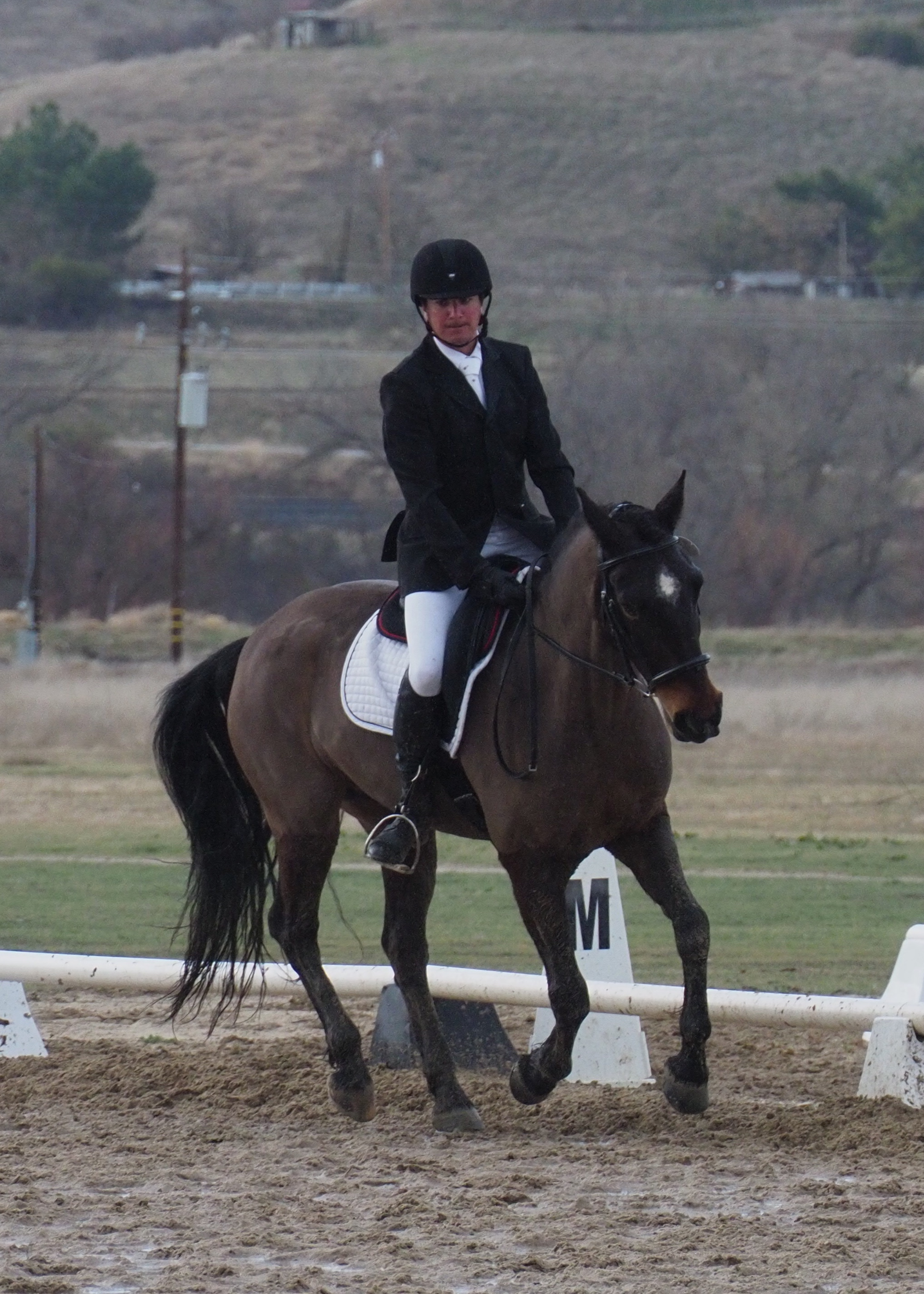 I told him during warm up that he needed to sit back. He doesn’t listen to me though, which is why it’s nice to have a trainer along. 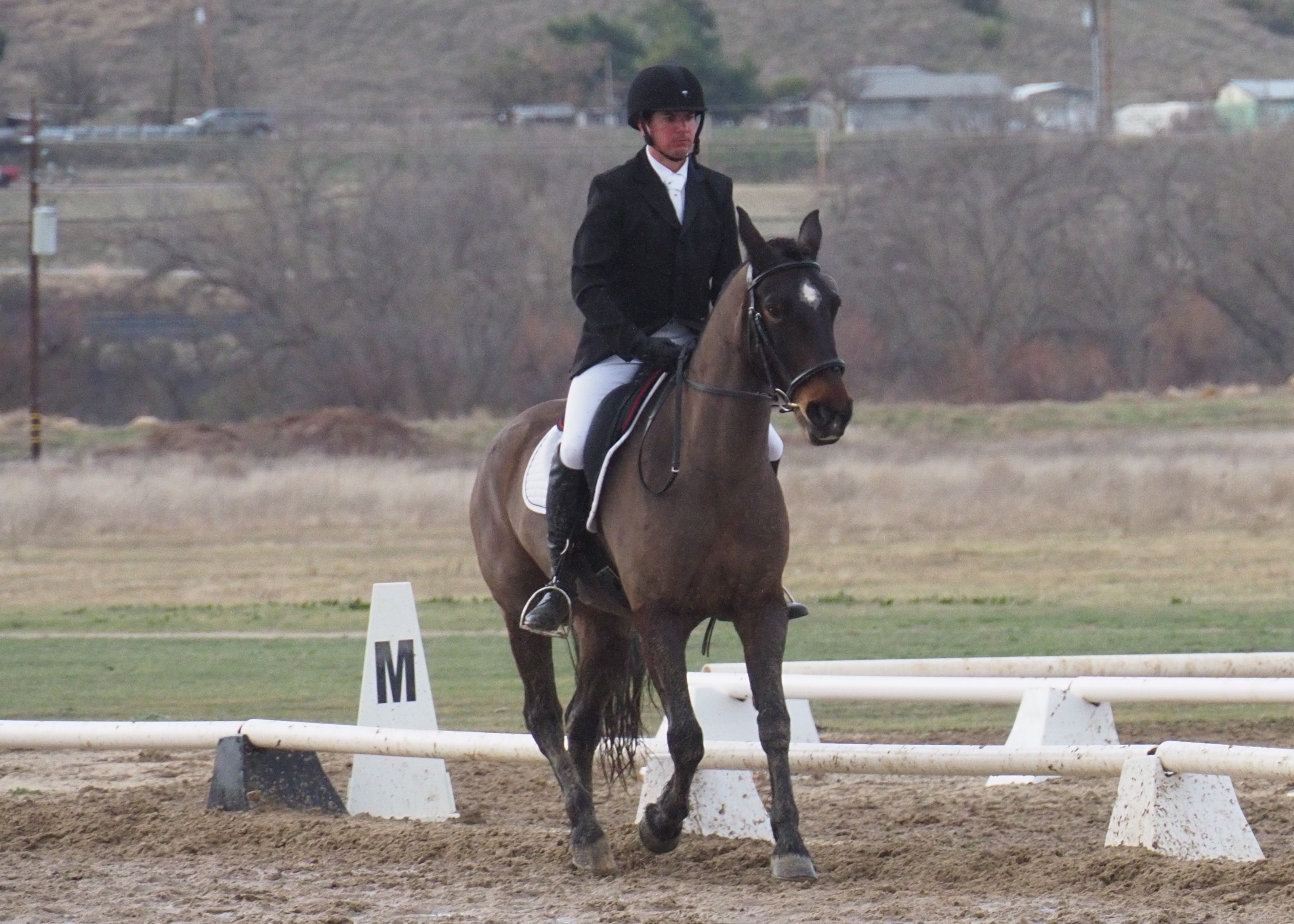 Giraffing, above the bit, braced, I’d accept any of those comments and agree it wasn’t a great transition, but he’s right next to the rail… 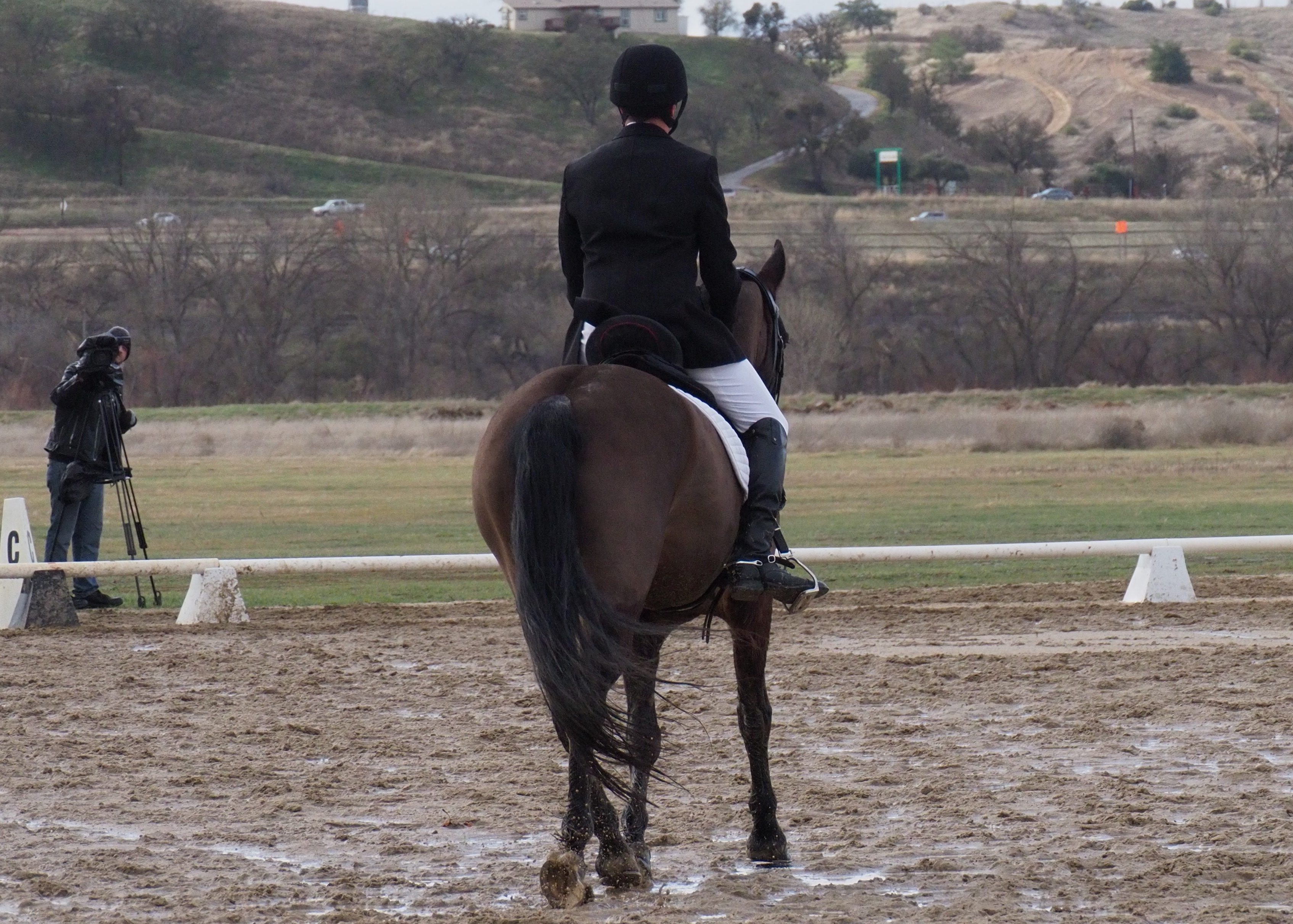 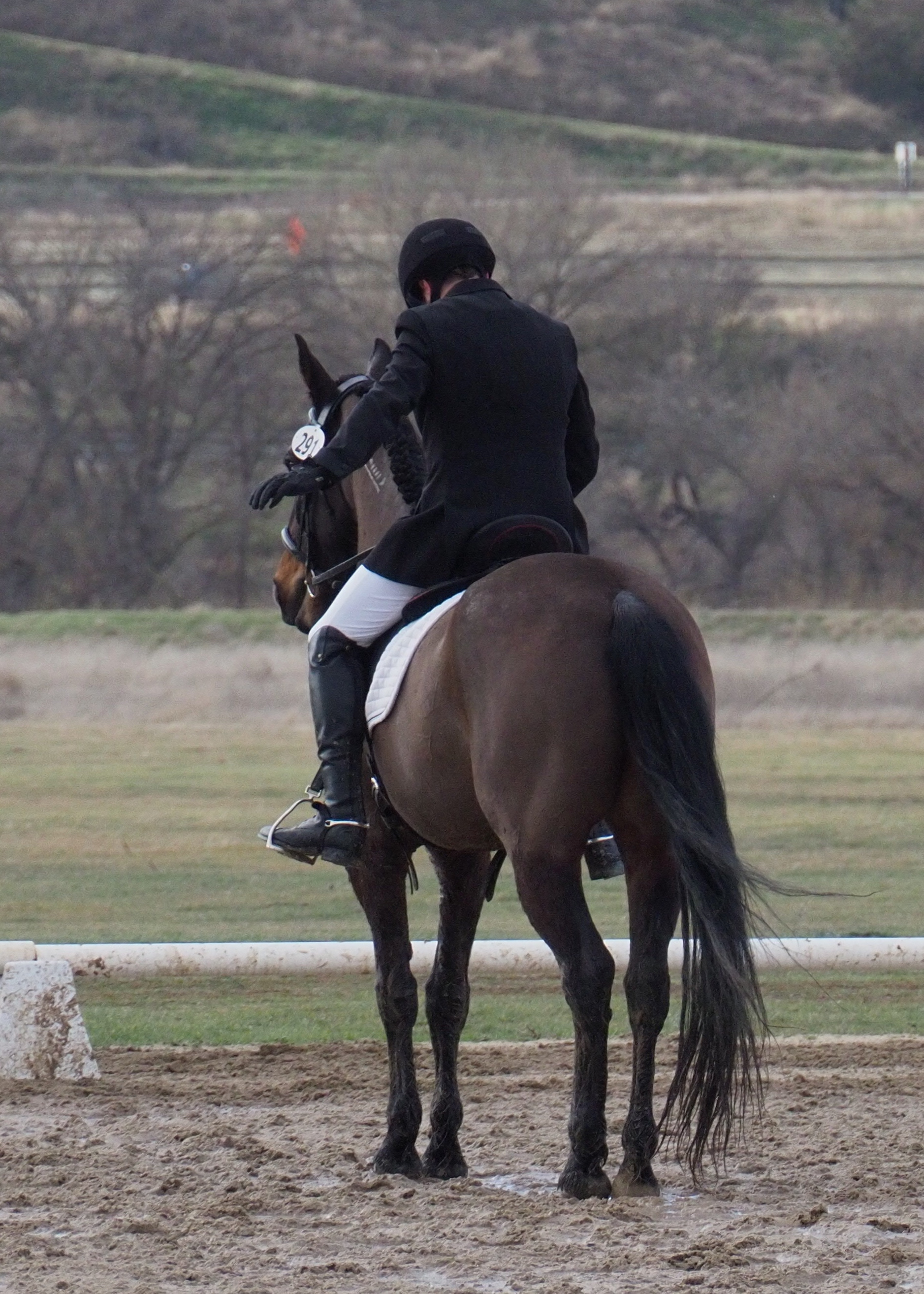 The test says halt through walk. They literally took 2 steps of walk (I have a burst of pictures showing it). This is a frustrating score to get since Eugene has a nice halt. 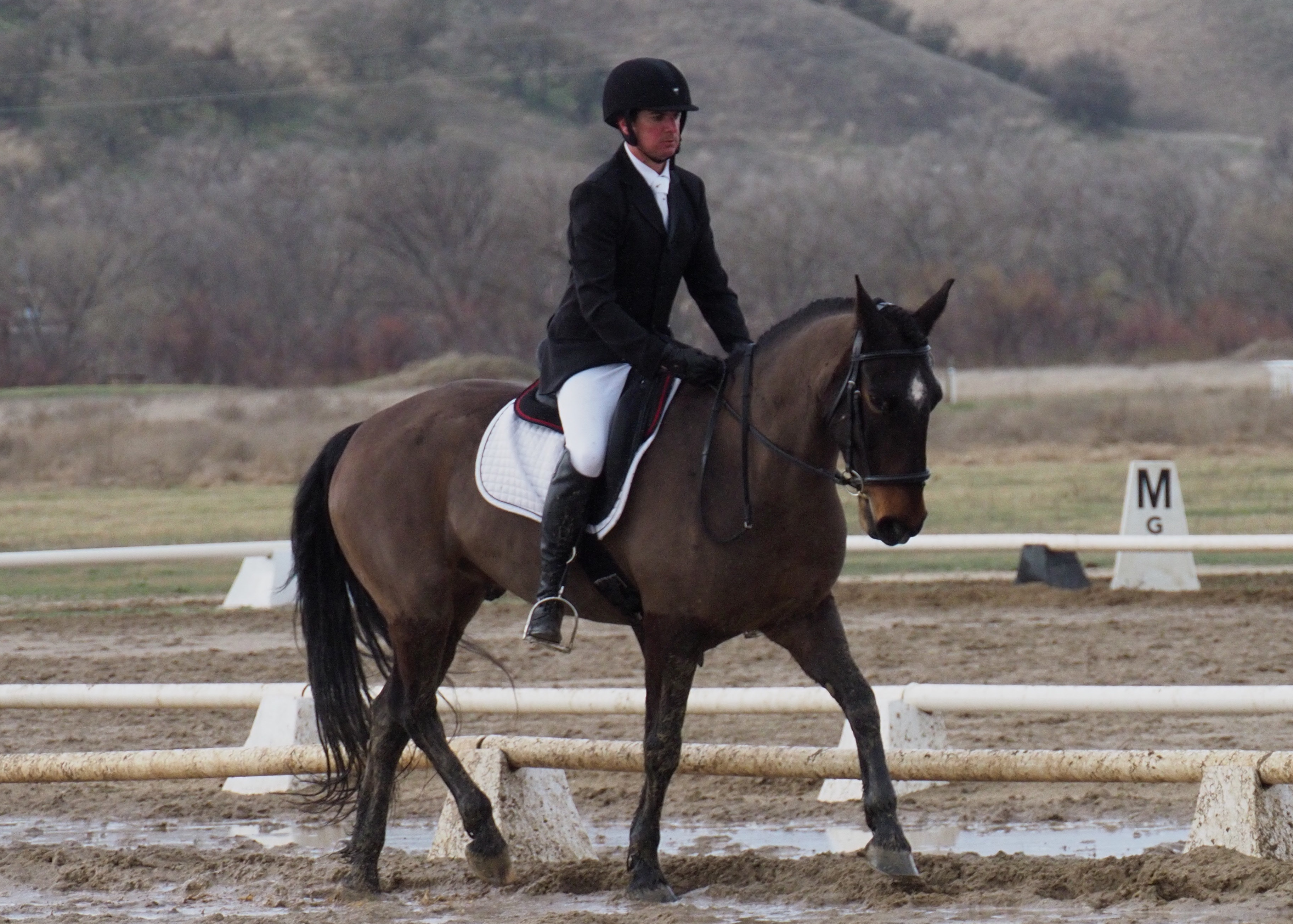 My husband came out of the test upset and claiming it was a mess. I actually thought it was a pretty decent test. Eugene was calm and and quiet for the whole test. Their upward transitions looked good and their geometry going into the corners was much better than in previous tests. The mud was unfortunate and my husband said Eugene was tripping a bit. But I do still think it probably helped them edge out some others whose horses objected more to the rain and splatter than Eugene did.

They ended up 12th out of 18, which is the the best position they’ve ever been in after dressage. Obviously not being in last after dressage is awesome and all, but the real success here is the improvement they’ve made. This was the lowest score they’ve ever received at a rated event. They are getting better every time.