Before I get to actual August events, I forgot to mention one of the fun things I did in June. June! Apparently, not blogging regularly makes it impossible for me to remember anything I did in the past. I met up with Beljoeor  and got to ride Tristan. 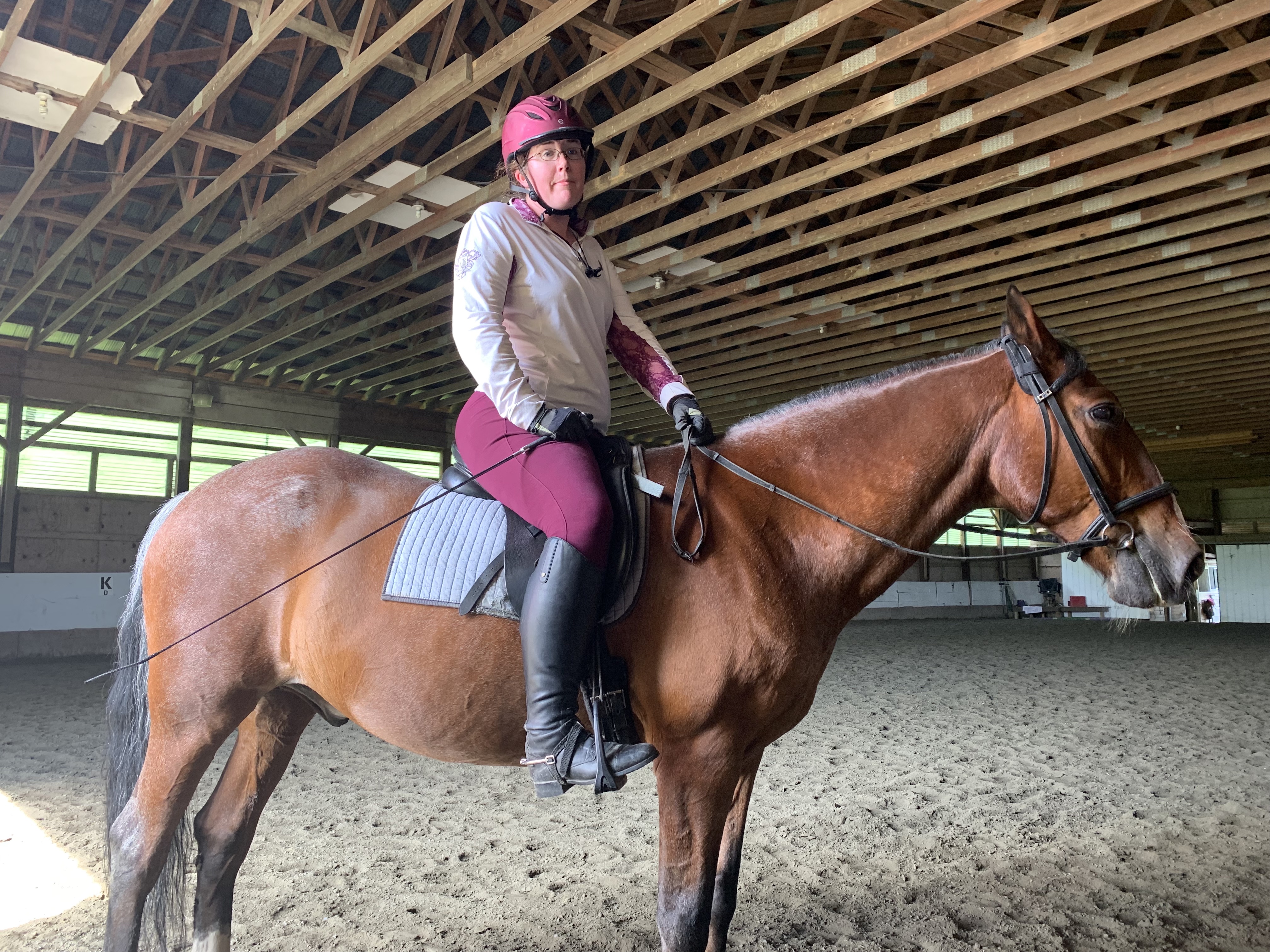 Tristan was not impressed 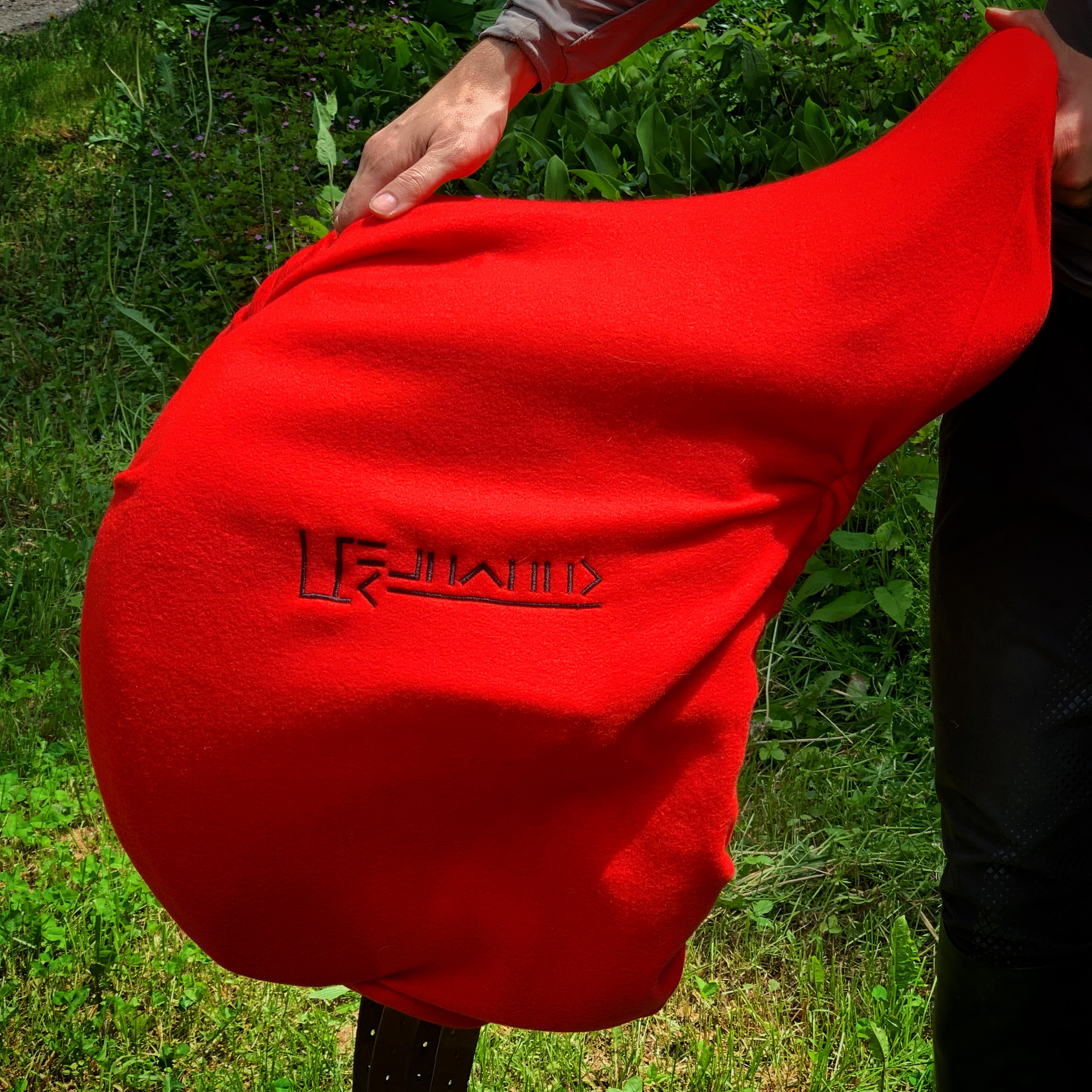 How amazing is this saddle cover with Eugene’s brand? Love it!

Anyway, back to August.

We started off the month by hitting up a bunch of local events. We went to the rodeo at Pond Hill Ranch, which was pretty fun. They do a wide variety of events to keep the audience amused, from bull riding, to barrel racing, to cattle work, to drill team performance and more. Plus fair food. Fry me up some food and let me watch ponies and I’m happy.

We were really digging into the whole #countrylife that weekend and we went to a Horse and Ox Pull the next day.

The event included a chicken dinner for lunch. What’s not to like about food and watching giant draft horses loose their damned minds. Seriously, those horses were INTO it. 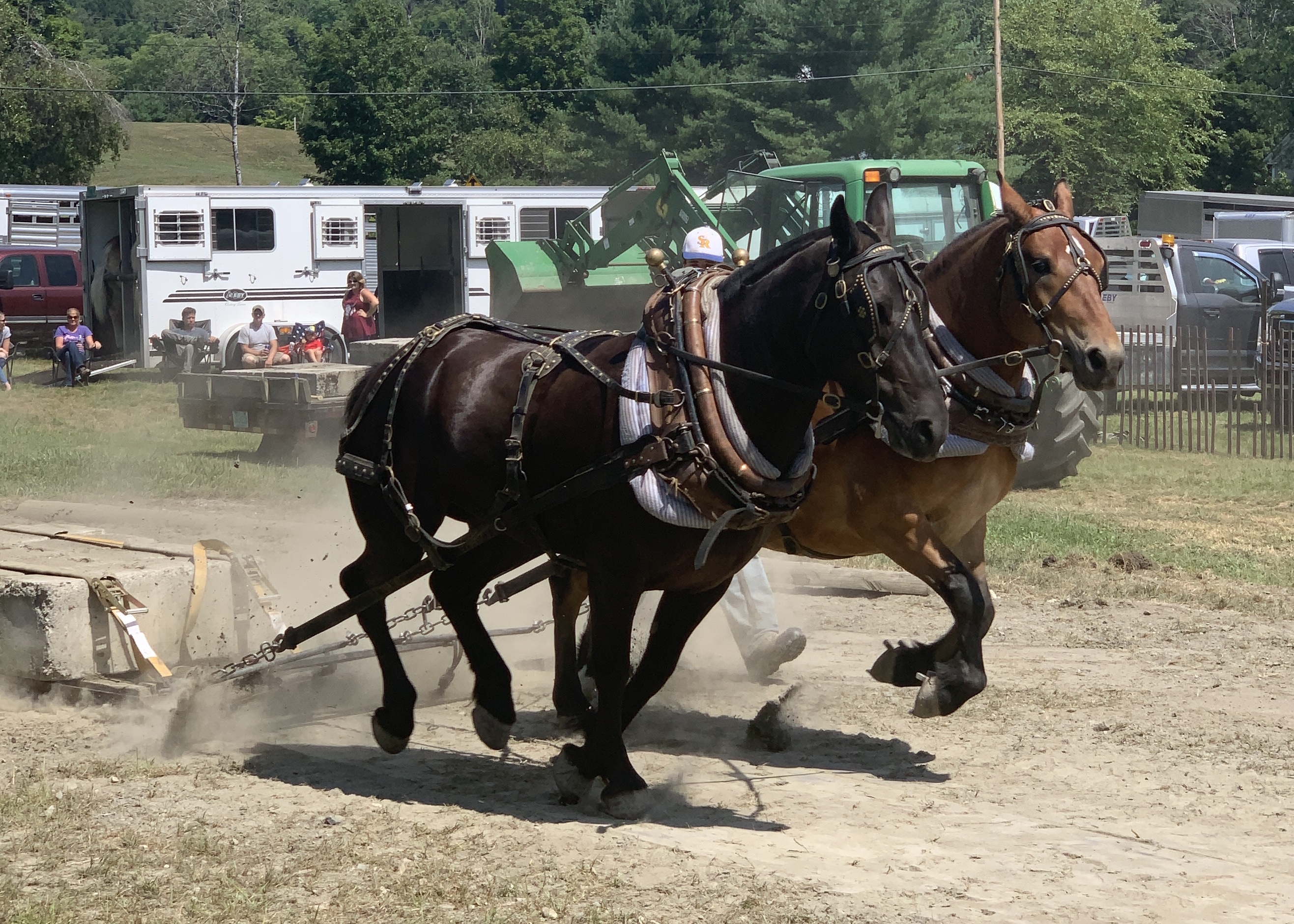 The next week, I volunteered as a jump judge at the GMHA Festival of Eventing on Friday.

On the Monday following events, GMHA is open to members for whatever the event was. For example, if they had a dressage show, they’d have dressage arenas set up. We trailered down for a lesson one time to take advantage of having a real arena to practice geometry in. If the event was endurance, the trails would be open. It’s all free to members. On the Mondays after eventing shows, the cross country course is open. Eugene’s hocks had been recently injected and, while he was cleared for light work, the vet didn’t want him doing a lot of jumping yet. We went down anyway planning to let him get some flat exercise while Levi got to jump things.

Levi doesn’t seem to understand that jumping over the brush makes it bigger. Then again, I don’t think he cares. #noscopenohope #eventer #eventing #crosscountry #blmmustang #palomino

Unfortunately, we got there on Monday to find that all the BN jumps had been put away. For the big August event, they run BN and Novice as a one day on Friday to clear up room in the schedule for the upper levels over the weekend. I didn’t realize that they’d be putting all the BN XC jumps away, but apparently they did. Because I’m a wuss, I had my husband jump Levi while I rode Eugene.

Levi doesn’t seem to understand that jumping over the brush makes it bigger. Then again, I don’t think he cares. #noscopenohope #eventer #eventing #crosscountry #blmmustang #palomino

Of course, Levi doesn’t have a problem with bigger jumps. That’s just me. 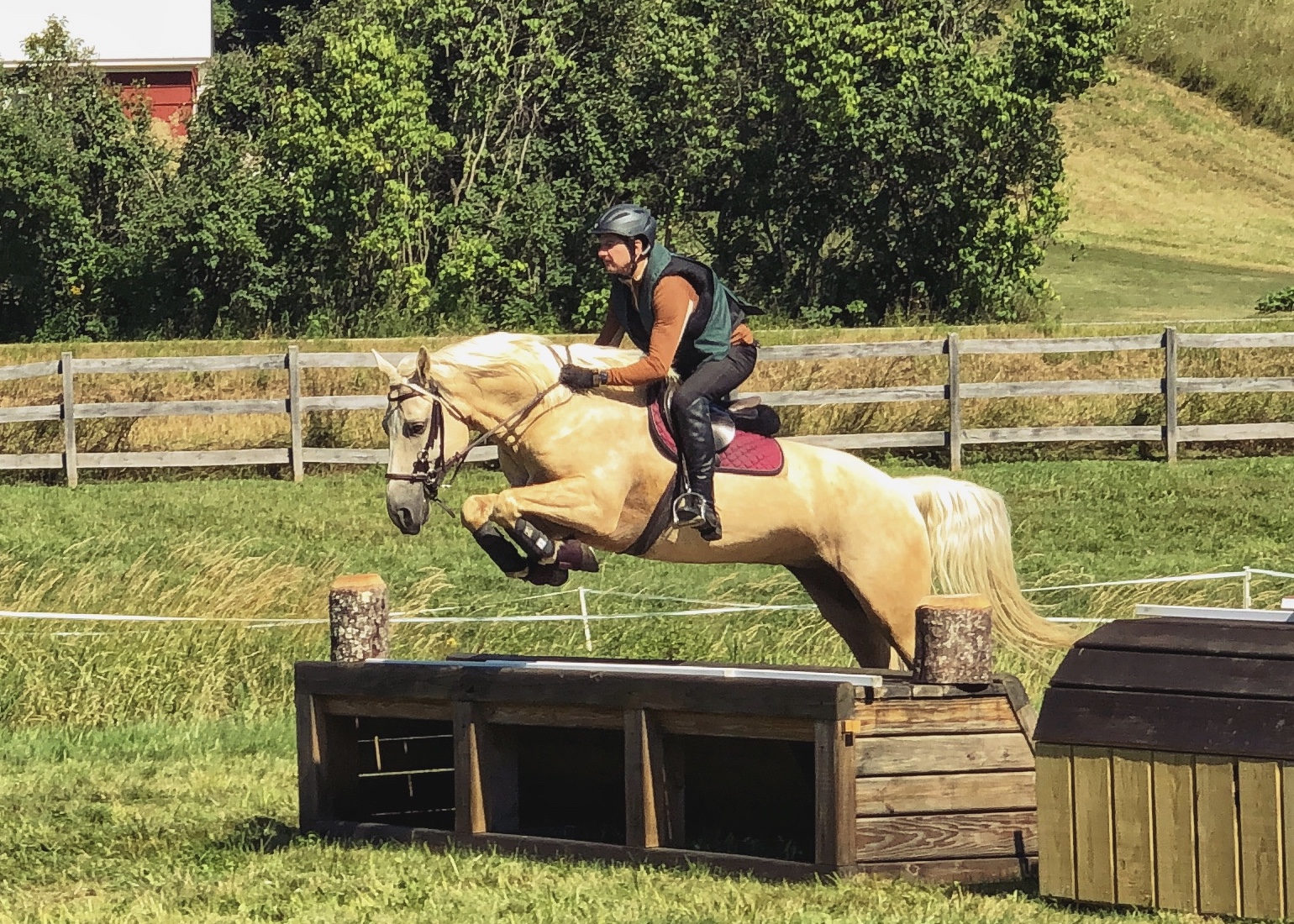 Later, that week, I went to a crafting meet up and learned how to make felt pendants. Of course, I found a way to make this equine related and made a Nilla mule necklace.

Went to an arts and crafts meetup and the craft was needle felting. Of course, I had to make a Nilla. #mulesofinstagram #mulelife #horselife #needlefelting #diy #artsandcrafts

Next weekend, we went back to GMHA for their Hunter Pace. I’d never done a hunter pace (they’re not at all popular in California) and doing one had been on my equestrian bucket list for a long time. I’ve read about them, but had no personal experience. We had the choice of entering the Hunting (faster) or Hacking (slower) groups and we chose the Hunting group. The woman parked next to us said the Hunting pace was “fast.” So we went fast. 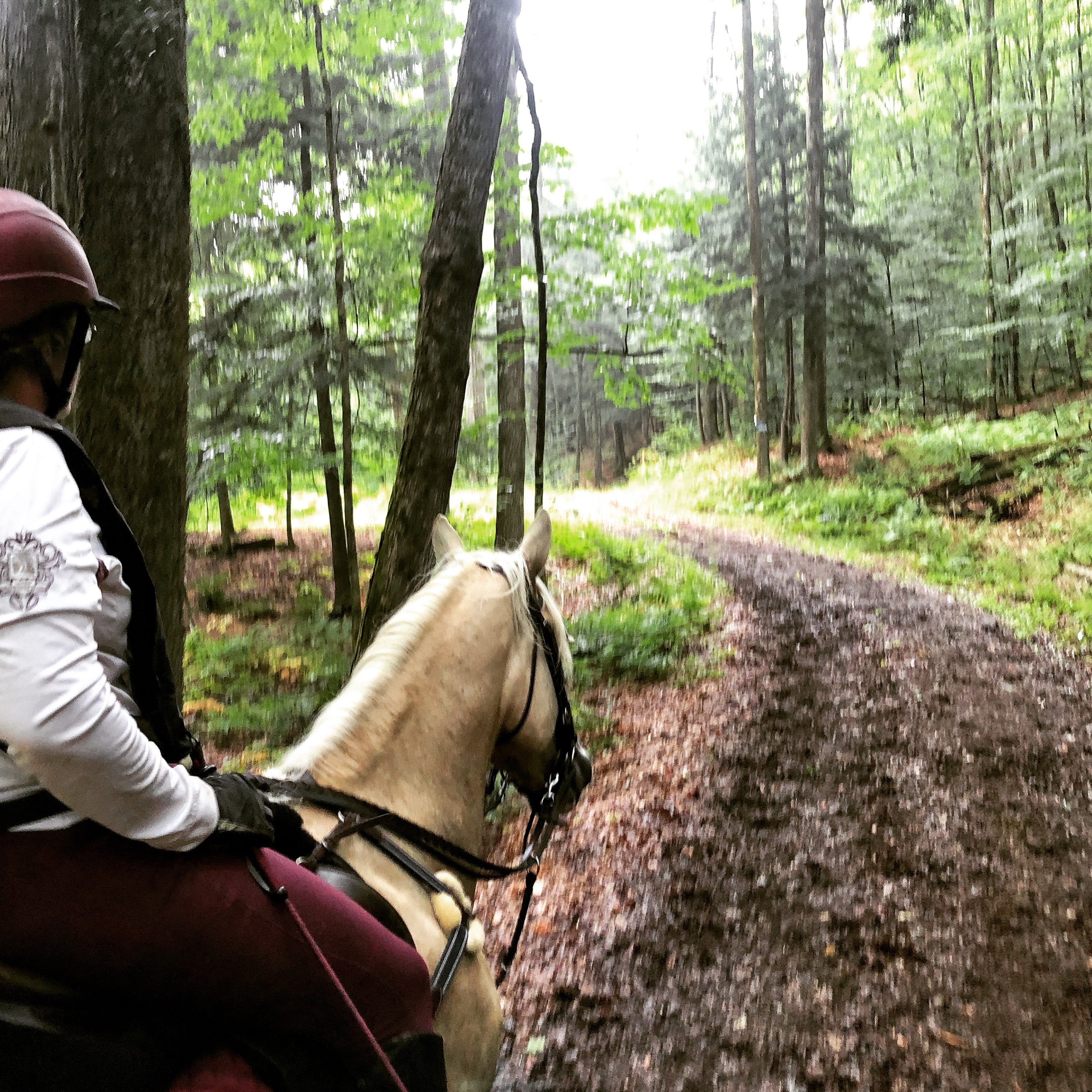 Too fast for pictures – I think we took like 3 the whole time. There was a stop about 2/3 of the way through with drinks and snacks, which was nice, as it was INSANELY hot. By the time we got back, the boys were drenched in sweat. We went through the finish line and the timer remarked that we were really fast. In retrospect, we were averaging about 6-7 miles per hour, which is barely faster than turtling at an endurance ride, but it felt fast because it felt like we were hustling all the time (and passing other groups constantly). The boys were so hot we took them to the creek and made them stand in the water and shade until they’d cooled down. 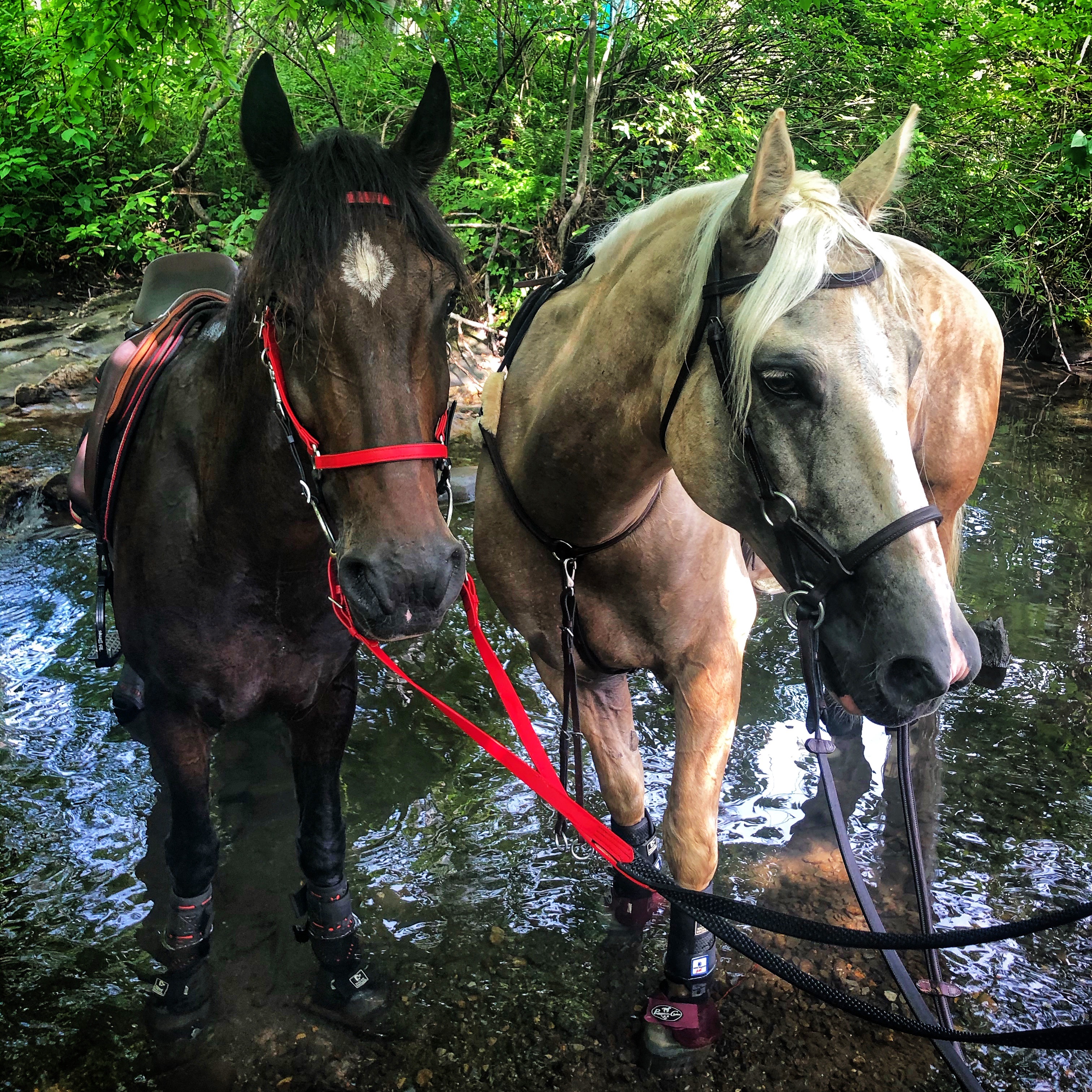 After everyone had returned, there was an included lunch and the awards. Trails, jumping, and food?! Seriously, hunter paces are the best. Despite being the fastest group, we came in second place – only 7 minutes off (faster than) the optimum time.

We did our first ever hunter pace today. Team #demandthebrand came in 2nd place in the Hunting division at only 7 minutes faster than optimum time. #hunterpace #blmmustang #horselife #horsejumping #trailriding #mustanghorse #saveahorserideamustang

After the hunter pace, my husband was off to California for work and then to go hiking in the Sierras with his friend. I don’t ride when he’s away because I live in the middle of nowhere and there’s no cell service here, so I occupied myself with other activities like finally getting rid of the *sshole rooster, and painting storage additions for the tack room.

I painted this thrifted bench for my tack room. Now I’m debating adding a cushion. Should I just put a removable one on top, tack a permanent cushion down, or leave it uncushioned? Thoughts? #tackroom #barnlife #wip #diy

Once my husband returned, we did something I’d been wanting to do since we moved here; we rode the horses to the town general store for lunch.

We rode the ponies to the general store for lunch yesterday. Had a delicious picnic lunch out in the lawn. Levi kept trying to steal our food, but both boys were happy to eat the grass. #trailriding #picniclunch #vermontlife #blmmustang @barnardgeneralstore

It was a gorgeous day for a ride. We got to explore some new trails, eat some good food, and take in the views. And it was a great way to end the month. Stay tuned for September’s recap coming soon.

Don’t forget the Giveaway! If you’d like to win a logo Saddle Cover from Beljoeor, leave a comment on this post letting me know what logo you’d have put on your saddle cover. I’ll do a random draw of all commenters next week.