This weekend, my husband and I trailered out to the Fresno for a jumping clinic with Bobby Meyerhoff. While my husband had been signed up for a while, I was originally just going to audit because I try to minimize Nilla’s jumping. However, I’m not actually competing her at all this month, so I added at the last minute. Spoiler alert: this was a fantastic clinic and Bobby is an amazing clinician. We are both so happy we were able to ride with him. 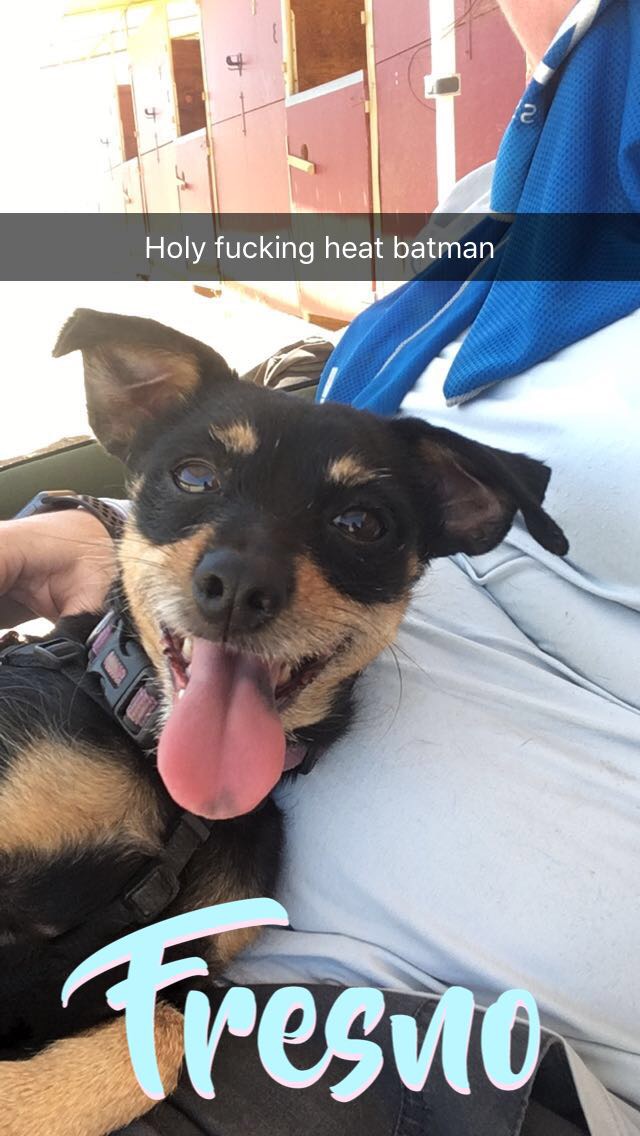 While Bobby was excellent, the heat was not. Saturday was 94 and Sunday was 100. I was pretty sure I was going to die of heat stroke. The dogs were hot, we were hot, the ponies were hot. Bobby is from South Carolina and thought it was actually pleasant out since there was no humidity.

Because we were riding in the same group, our plan had been to use the helmet cameras to record each other, but we failed spectacularly at erasing previous footage off of them and got nothing. I took a few pictures with my cell phone, but not a lot.

We started with intros and explained what we were working on then a quick and minimal warm up to preserve energy in the heat. My big thing for Nilla is trying to get her to not bury herself at the base and then jump like a coon-jumper from a near-standstil. It’s very, very hard to ride. My husband wanted to work on general riding skills and preparation for stadium tests at shows.

We went over a little X and then a vertical just to get going. Bobby thought Nilla was a cute jumper. The first exercise he had us work on was a roll-back to a vertical. He walked us through the strategy for getting a good line and pace. We nailed the line, she coon-jumped it and he saw what I was talking about. So he started strategizing.

My husband and Eugene needed to practice at getting the right line for the roll-back. Bobby really emphasized drawing a line through the middle of the jump and making the turn before the line then going straight over the jump. They either drifted over the line or hit the jump still bending the first few times, but eventually got it straight.

For Nilla, he suggested putting ground poles out from the jumps for Nilla to force her to jump from a distance. And Nilla was like, “I’ll see your attempt to fix me and raise you this much awkward”: 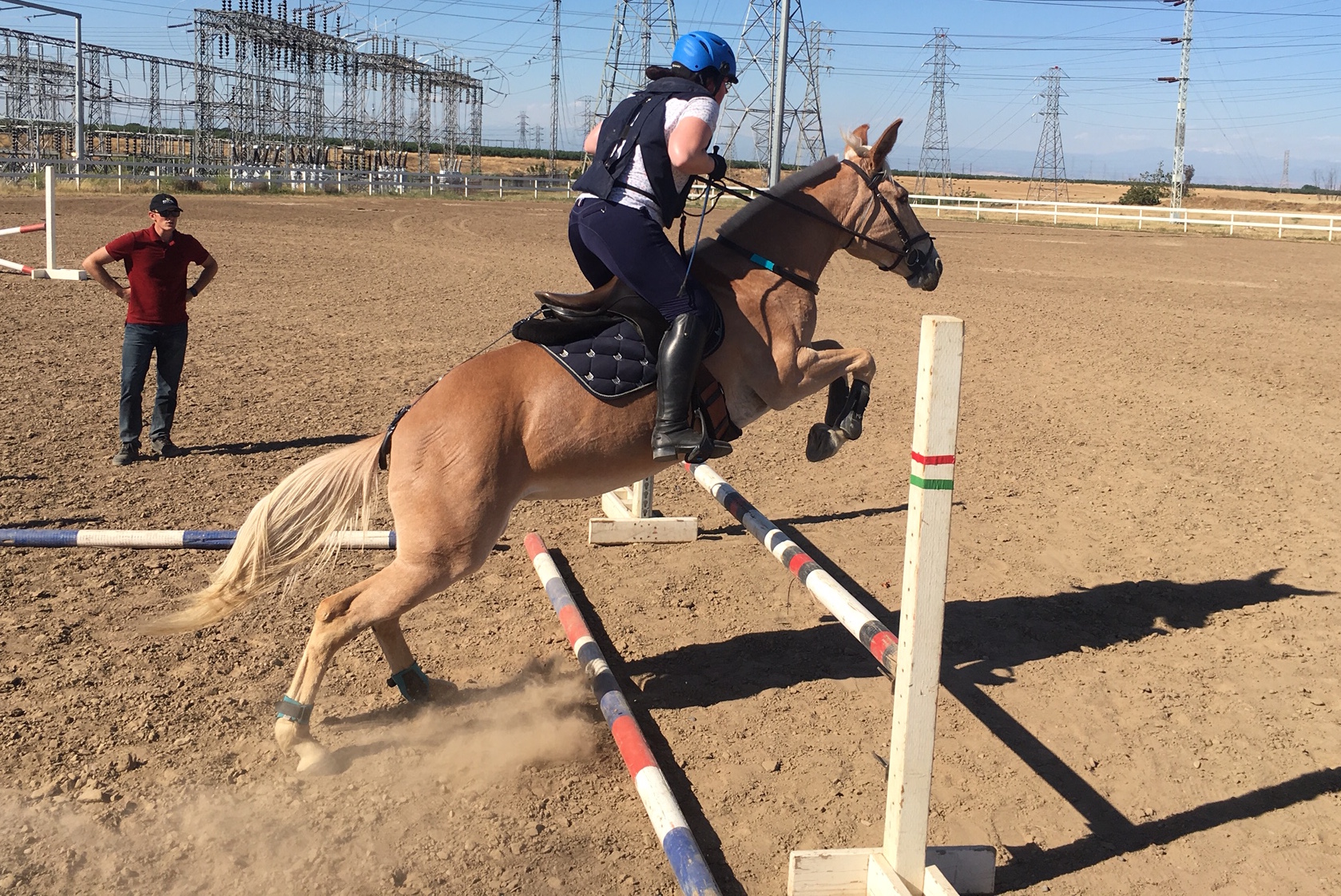 I don’t even know what I’m doing. We came back around and figured it out though. 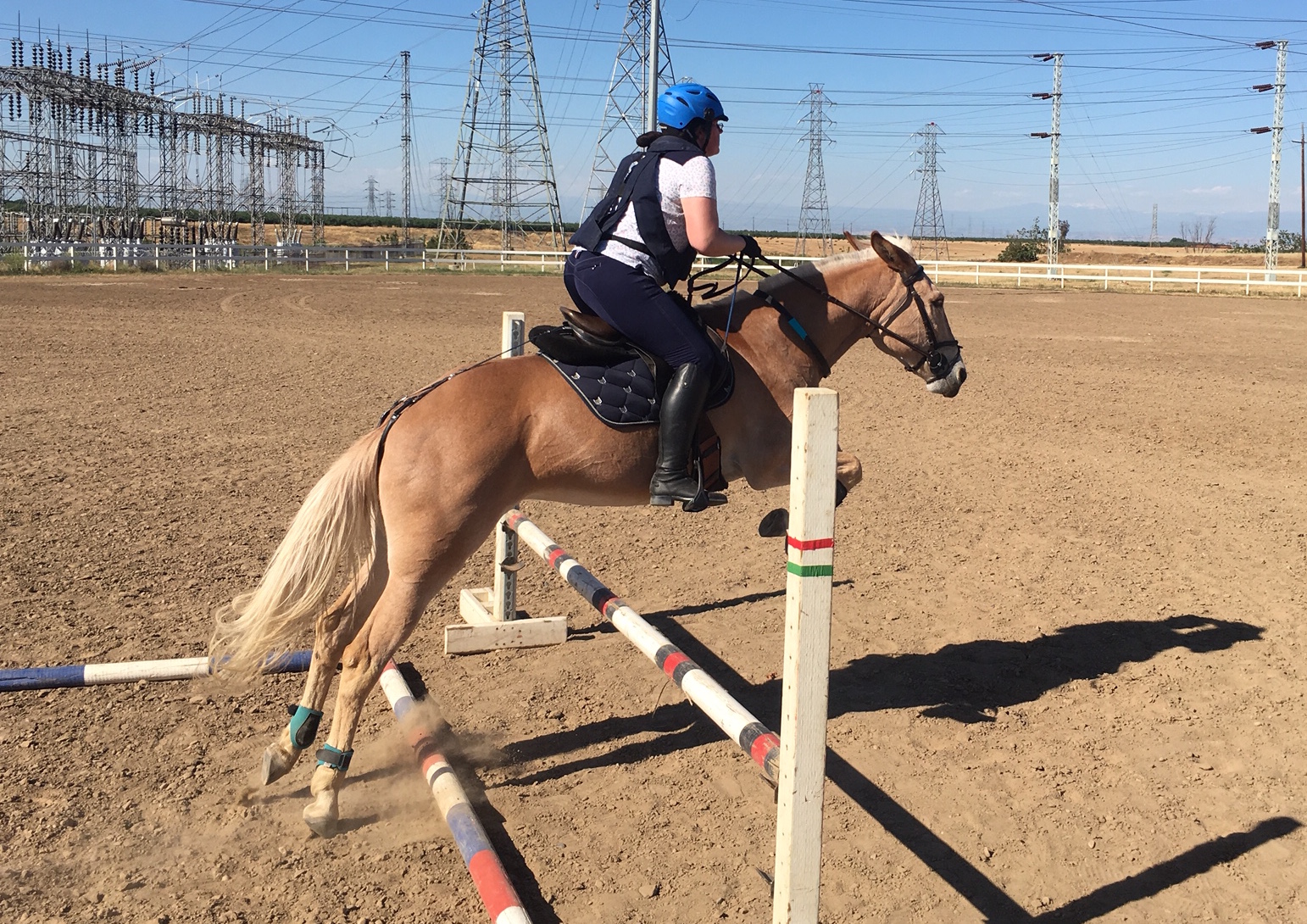 Eugene, however, could not wrap his head around the concept of the placing pole: 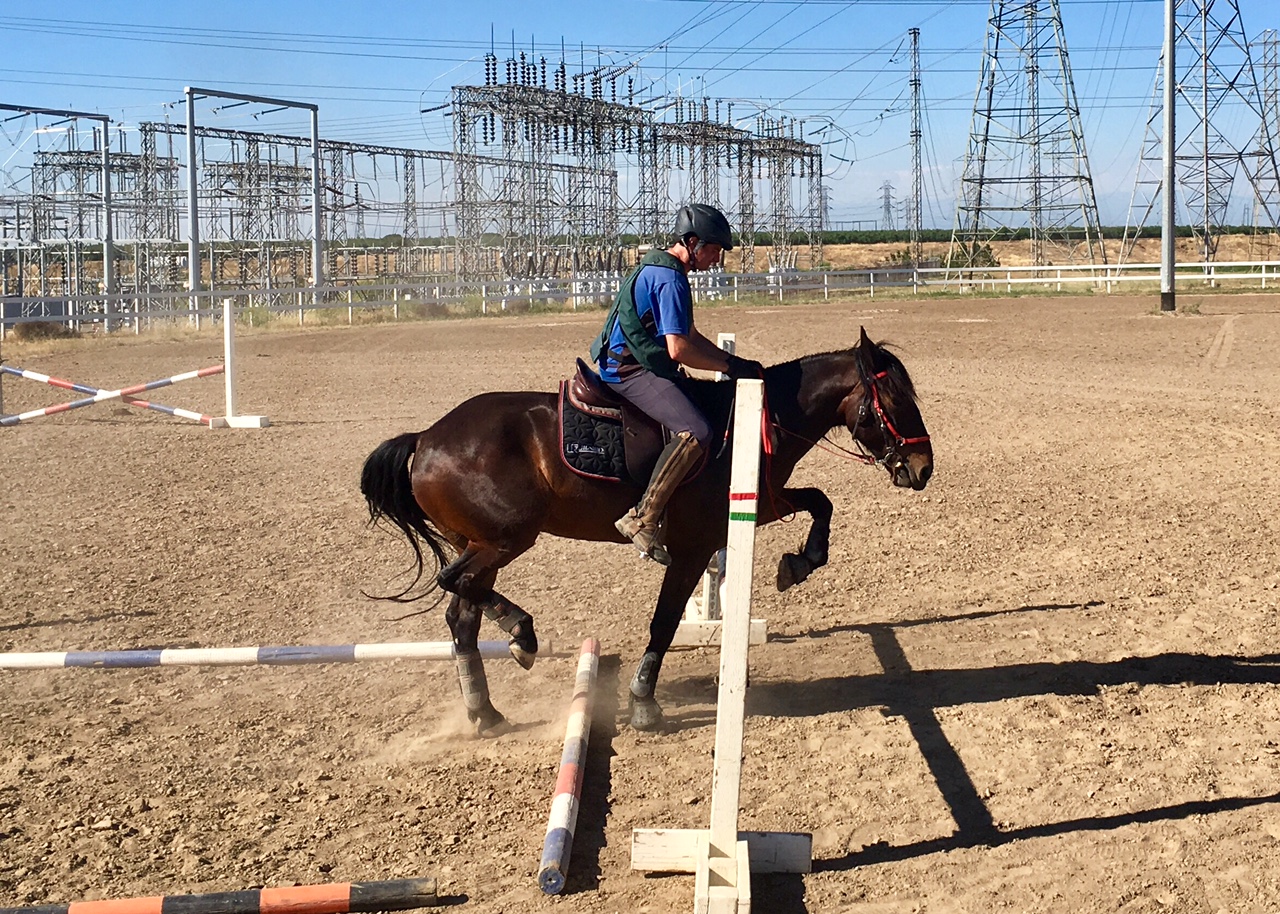 So Bobby had to move the poles in and out for the two of us until Eugene figured it out. It was great that he was willing to customize the lesson to each of us. Eugene did eventually get better at jumps with poles, but remained a bit confused. 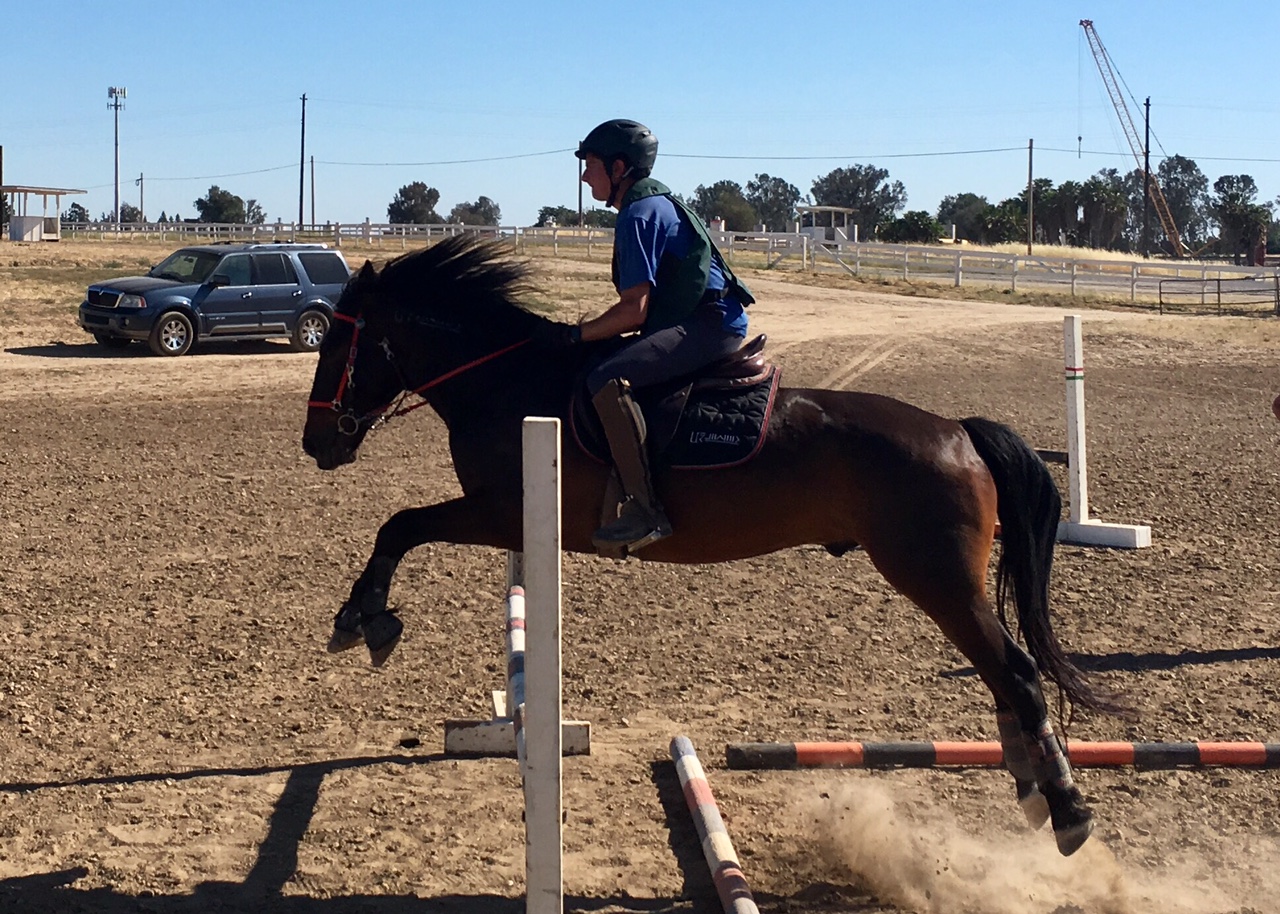 My husband moved on to do a bending line with the emphasis on not actually bending over the jump, but going straight, turning, then going straight over the next jump. It’s certainly a skill they need practice with and will really help with stadium rounds. Eugene is just so willing, he’ll try to do it no matter how poorly aligned he is. But he will pull rails when he’s not lined up. 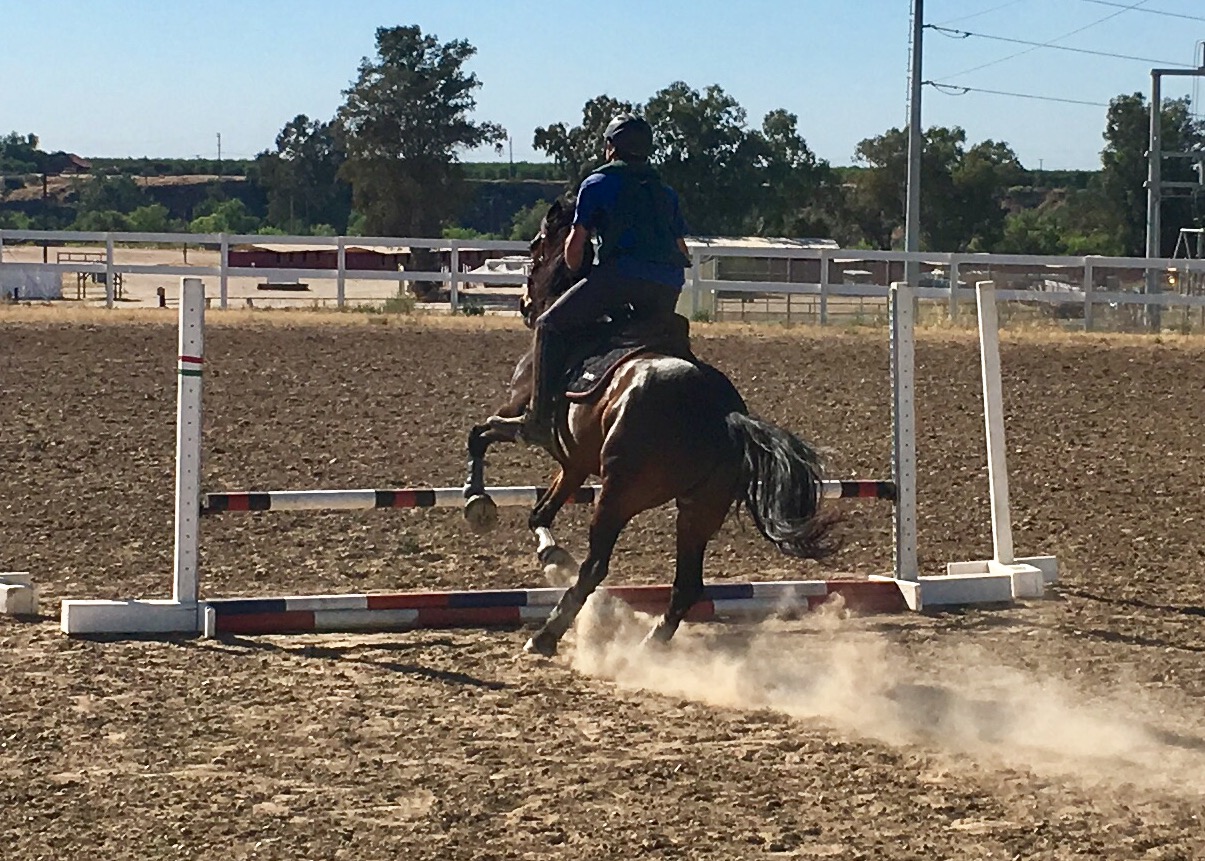 They eventually added a few more jumps and made a little course. Bobby really wanted them to practice getting straight to the jumps so he had the course loop around with rollbacks and turns to most of the jumps. 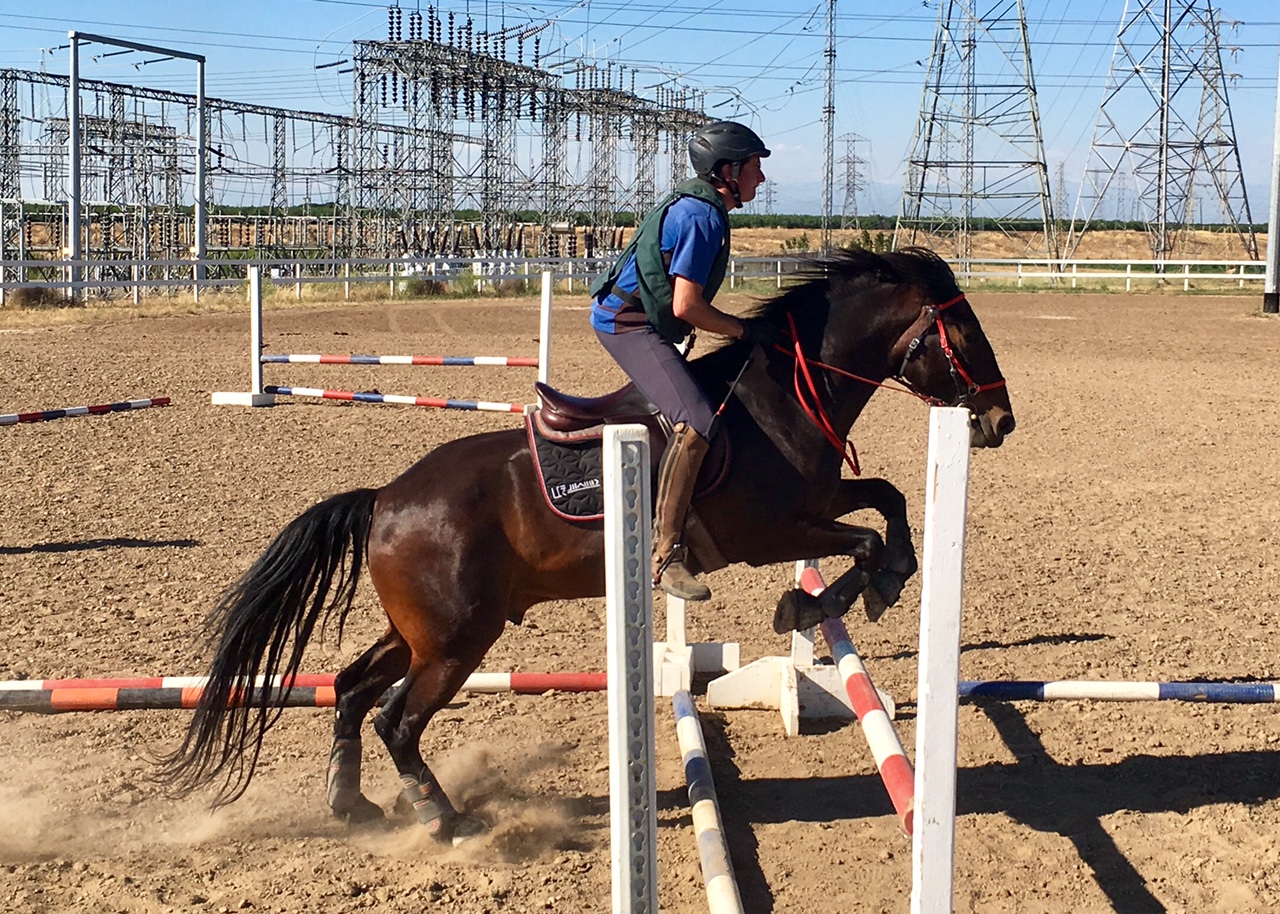 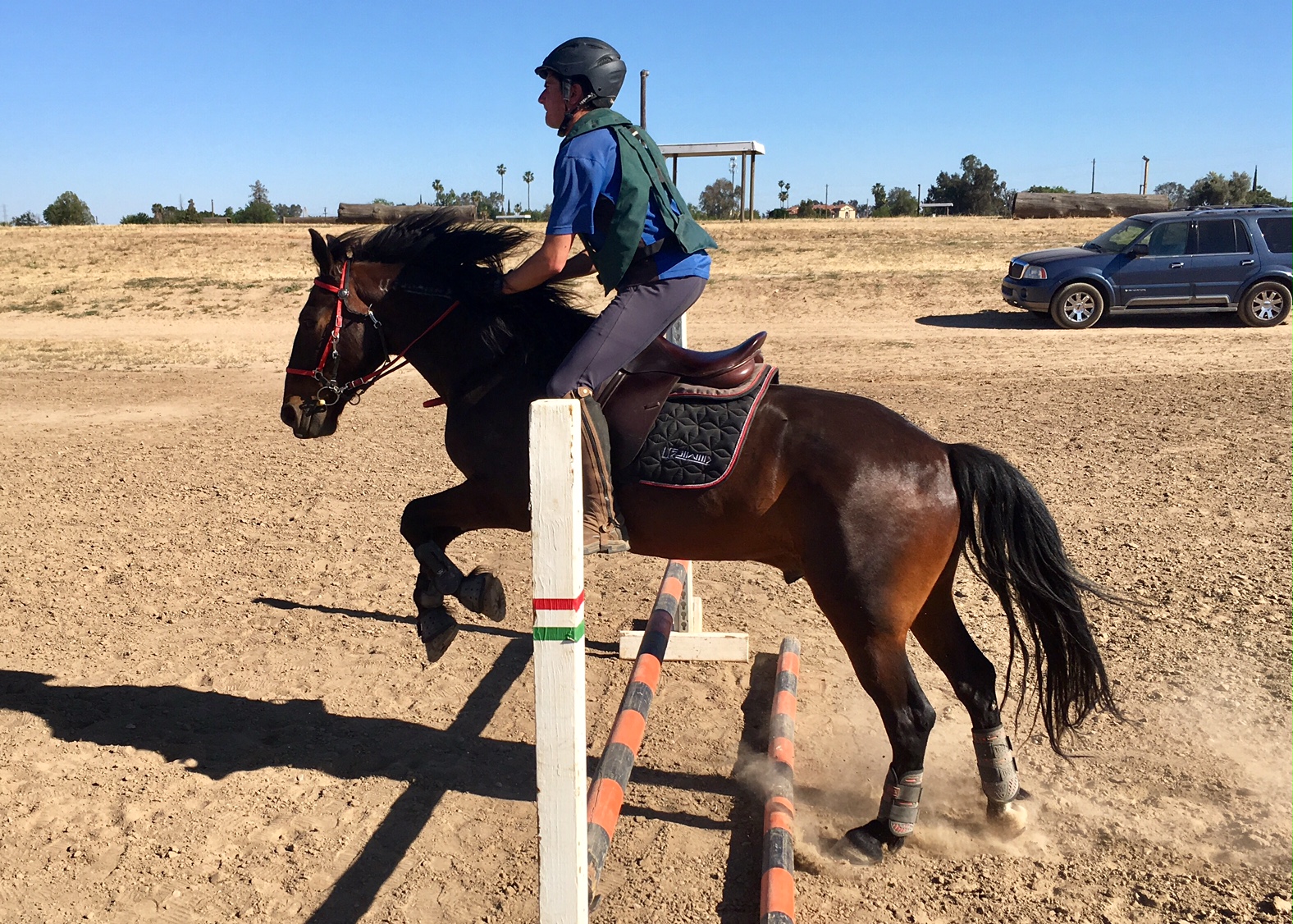 Nilla and I stuck mostly with the two stride line with poles. Bobby wants us to practice that as much as possible to get her used to jumping from further away so when we eventually go to a show and cant have the poles she’ll remember and jump from the distance. Sadly, with our rate of progress, that’ll be like 3 years from now. 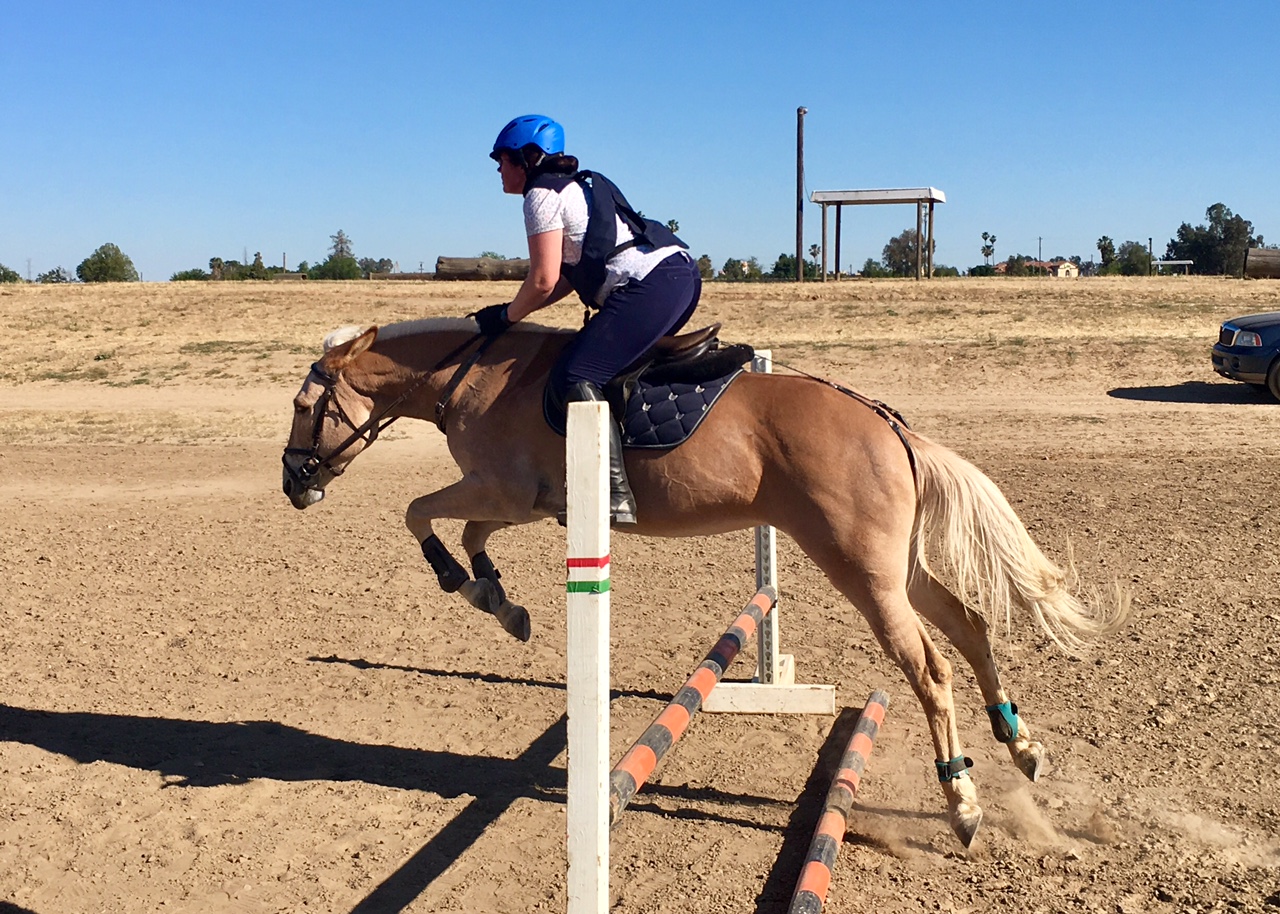 He did have us end with a little course. After the jump above she landed bucking and her saddle had slipped forward. I panicked for a moment thinking her crupper had broke again, but no. Her girth had loosened and allowed the saddle to slip, but the crupper had caught it. I stopped, fixed the girth and we finished our little course. 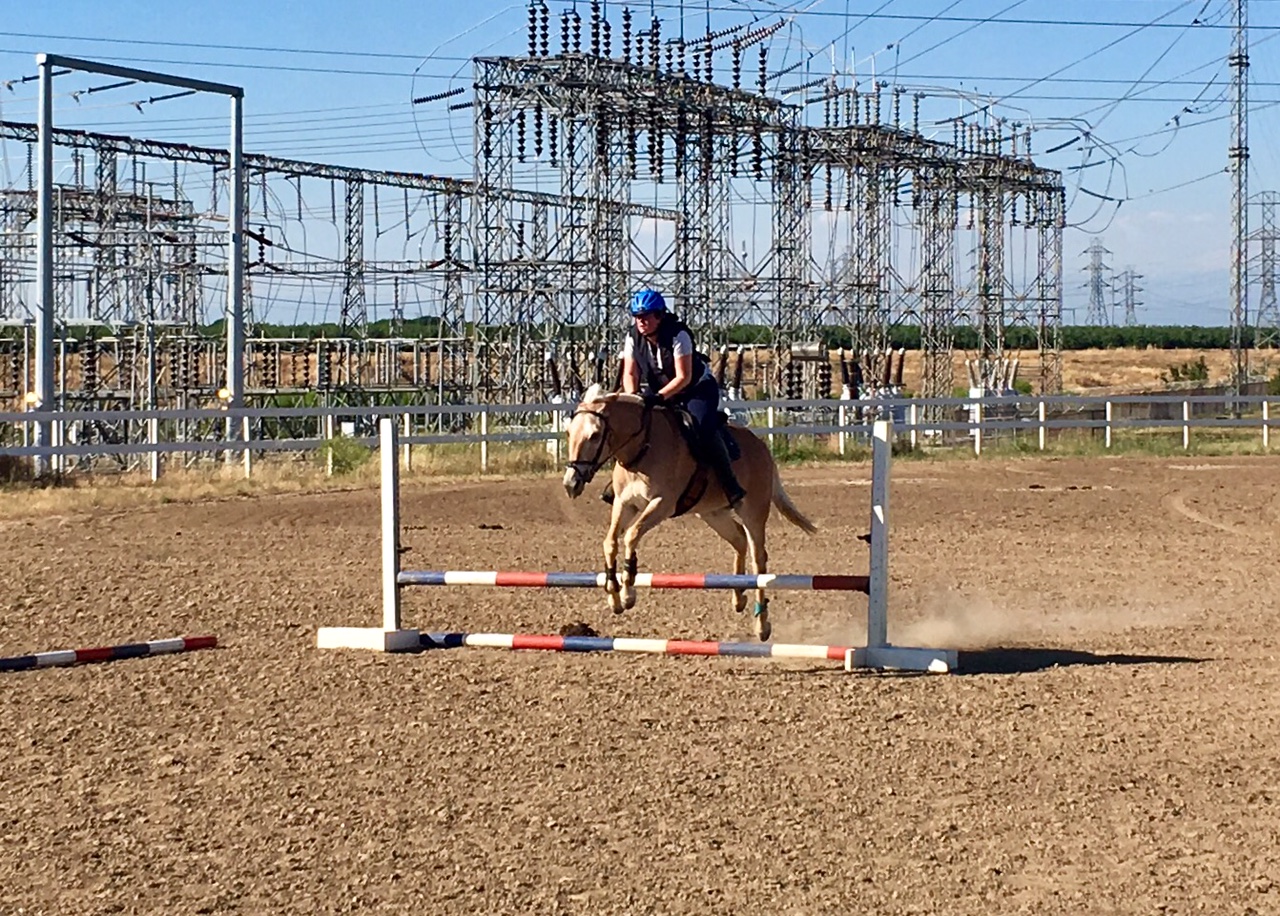 Bobby was nice enough to invite us to dinner with him and the other clinic participants. It was really nice to sit and chat about horses and hear about his trip to Rolex. After dinner, we returned to the horse park to sleep before XC the next morning.