2 weeks ago we took Nilla and Levi to a playday at the local town arena. It was low-key games designed to be fun and not stressful. I’m all for taking Levi to as many new experiences as possible. This trip would have been good for Eugene too, but he was on rest from his hock injections, so Nilla got to go instead. As much as I think games are fun, Nilla thinks they’re stupid as all get out. She is not a games mule. She does like attention though. 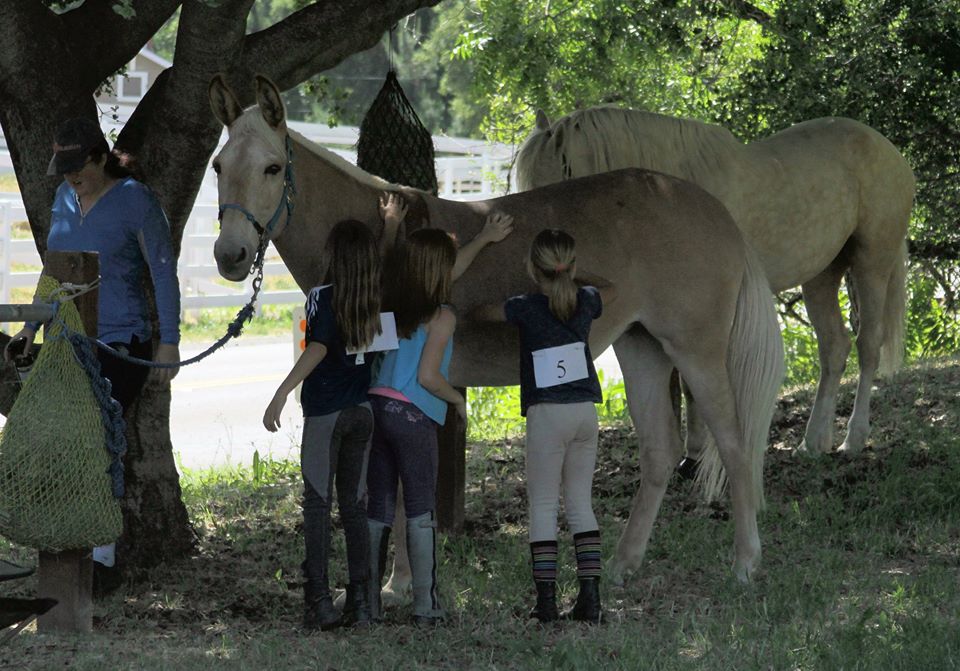 Nilla being loved by all the little girls

The morning half of the playday was for little kids. They had some really cute events like carrot eating contest where the kids rode from one end to the other, their horse ate some carrots from a bucket and then they rode back. First one over the finish line won. Adorable. The afternoon was for more advanced riders, but was still mostly kids. Thankfully, there was at least one other adult competing.

We started with the Advanced Obstacle Course, which was really just a trail class. This started with a gate, then a small cavelleti, move a cone from one barrel to another, and then back through an L-shaped chute of poles, and then trot poles. Nilla was not amused by any of it, but being asked to back through poles was like asking me to exercise. Not gonna happen. She attempted rearing, I put the kibbash on that, I finally managed to drag her through it and the rest we sailed through.

I have never practiced backing around a turn with Levi, but I shouldn’t have been surprised that he did it so well. He’s just such a chill horse. They placed first for this class.

Backing through the L

The next event was “Run the Gauntlet.” It started with a simple PVC gateway to pass through and new scary things were added with each pass. If your horse wouldn’t go through, you were eliminated. The first thing they added was a tarp filled with water and poles. Levi thought that was terrifying. Because the PVC structure wasn’t actually stable, they had kids holding it up and I was like, omg, the gauntlet doesn’t worry me, running over a child worries me. 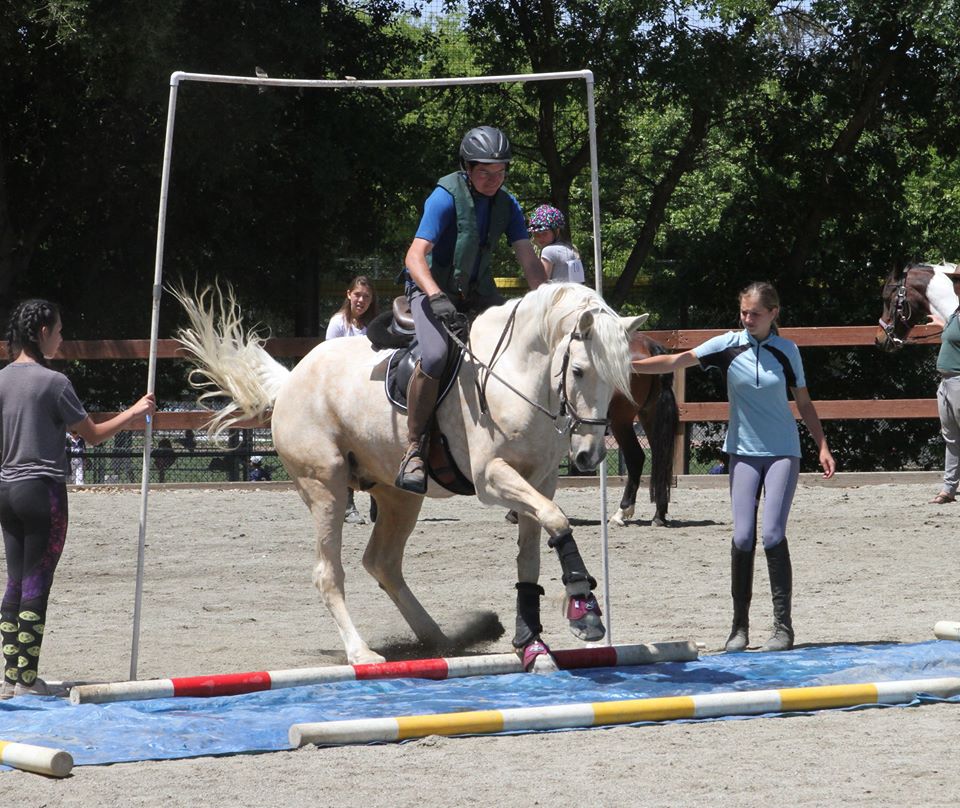 the floor is lava

Although Levi was initially freaked out about the tarp and water, he did go through without smashing anyone or running out of time. After that, he didn’t care about anything. The addition of flag, hula hoops, balloons, cones, an umbrella, an a ball were all unconcerning. He just marched right through. 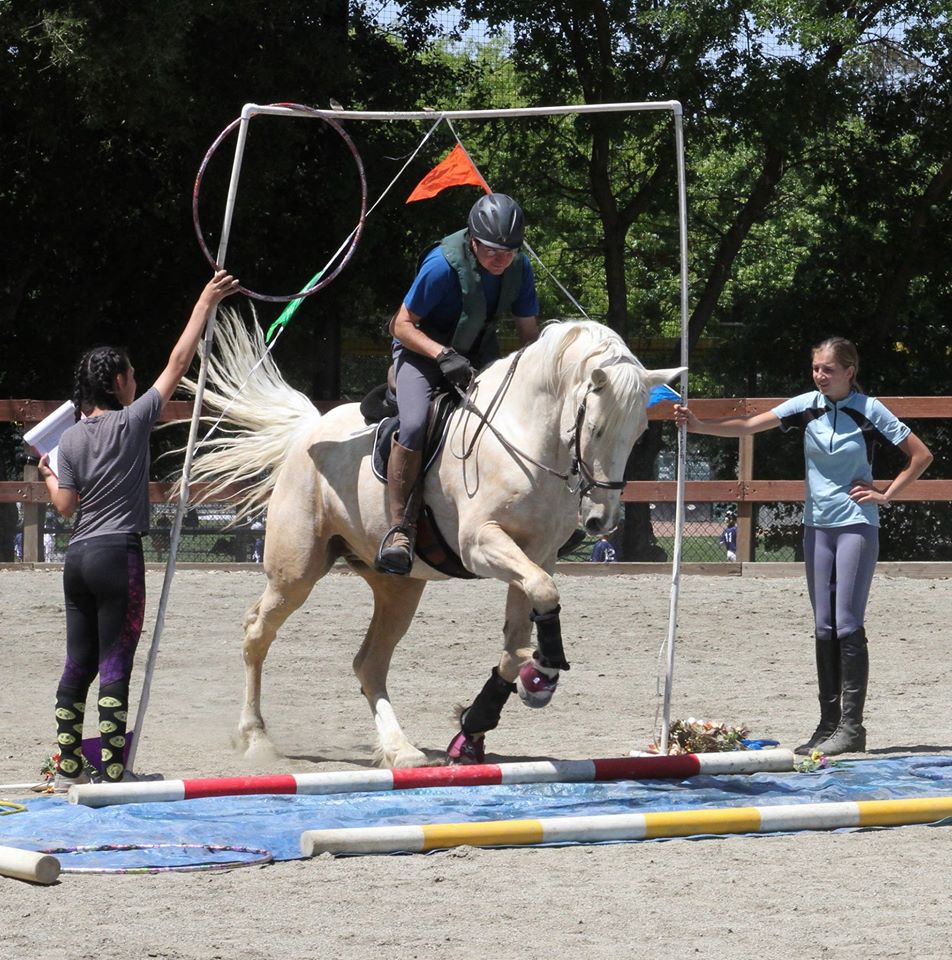 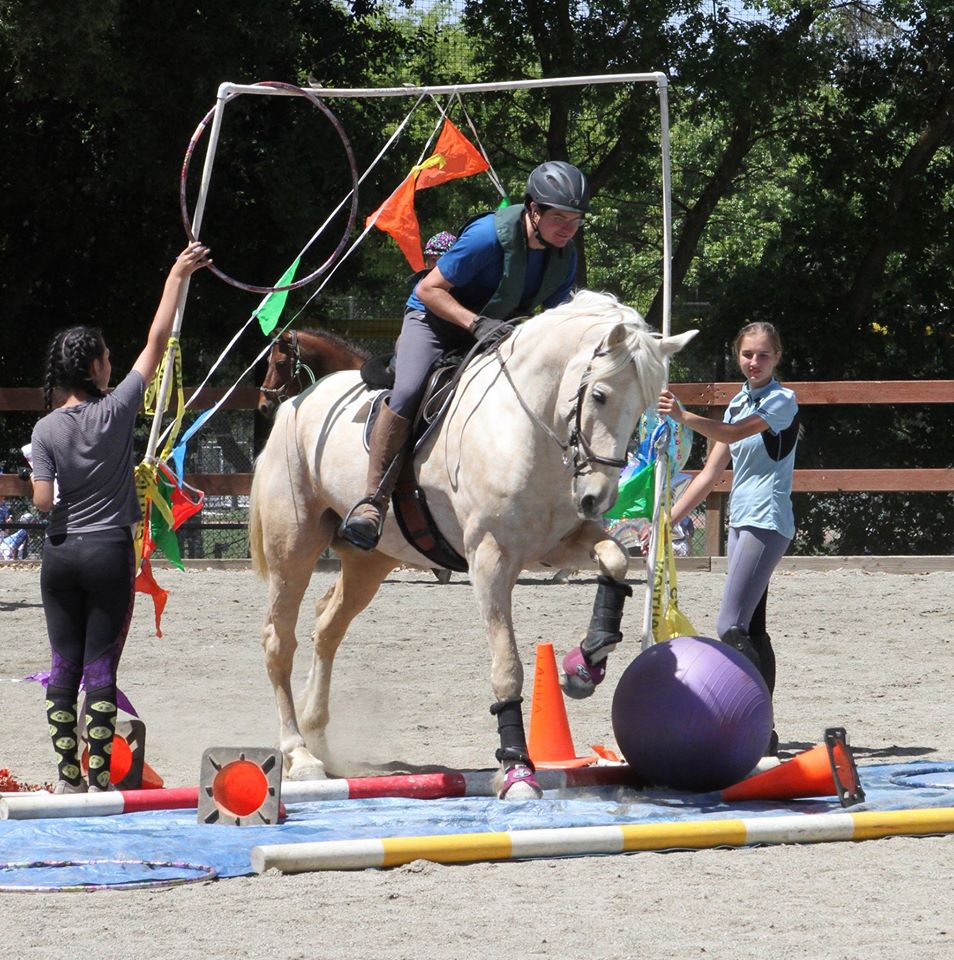 Nilla didn’t care about any of the “scary” things, but as I mentioned, she hates games and thought this was stupid. She pulled a rear and spin at one point when it wasn’t even her turn to go. We were just in line and she was like, peace out. I marshaled her back into line and we finished, but Nilla was pretty sure this wasn’t worth it. They ended up calling it with 4 horses still in the contest because they didn’t want to add anything scarier and get anyone injured. 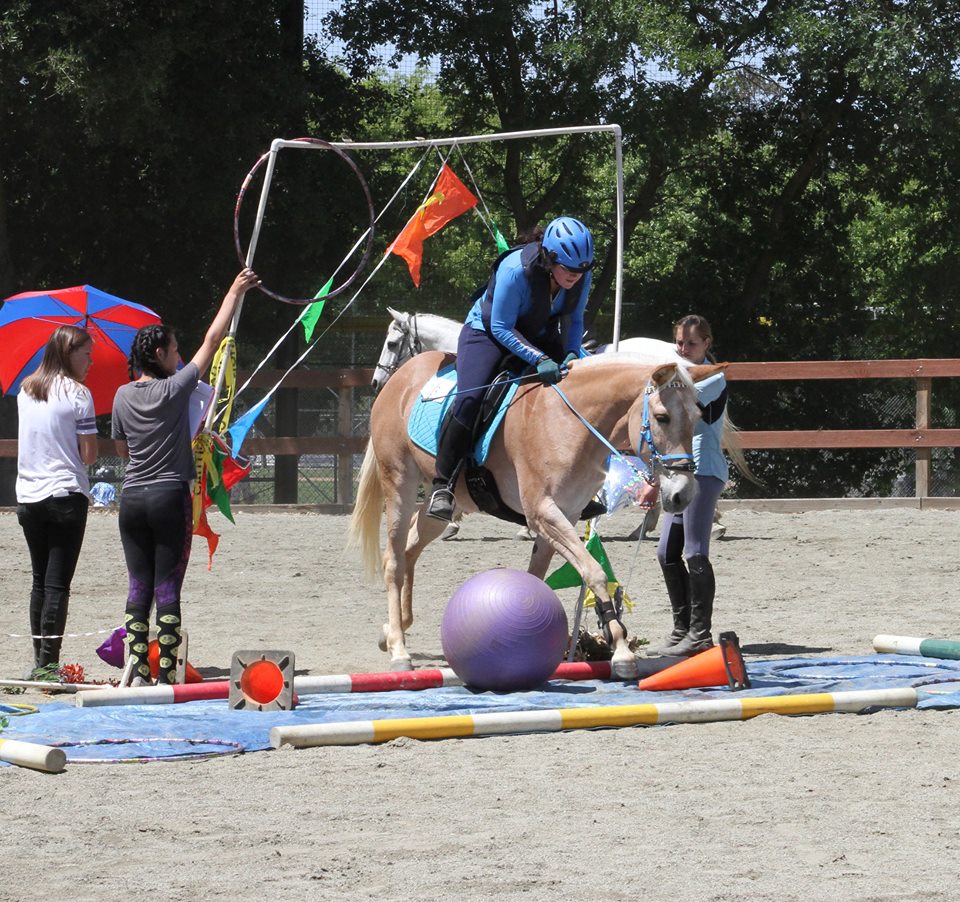 Next up was the water race, which was like we had done at the schooling show last year. We each had a cup, a small bucket at our start and a larger bucket with water at the other end of the arena. Ride to the water bucket, scoop up water, come back and pour it in your bucket. They ran three riders at a time and had 9 total entries. The rider with the most water in their bucket after 5 minutes wins.

Despite Nilla hating games and me managing to pour half my water on the ground instead of in my bucket because if have the hand-eye coordination of the book-worm I really am, we somehow came in 3rd. Levi, on the other hand was loving games and my husband has some sort of actual ability to use his body as intended, so they won.

Next up was water relay. This was a pairs event. We had a cup of water filled to a line. Each rider rode from one end to the other and back, handed off the cup to their partner, and the next rider ran back and forth. if your water went below a line marked on the cup, your team was out. As long as it stayed above the line, the fastest time won. 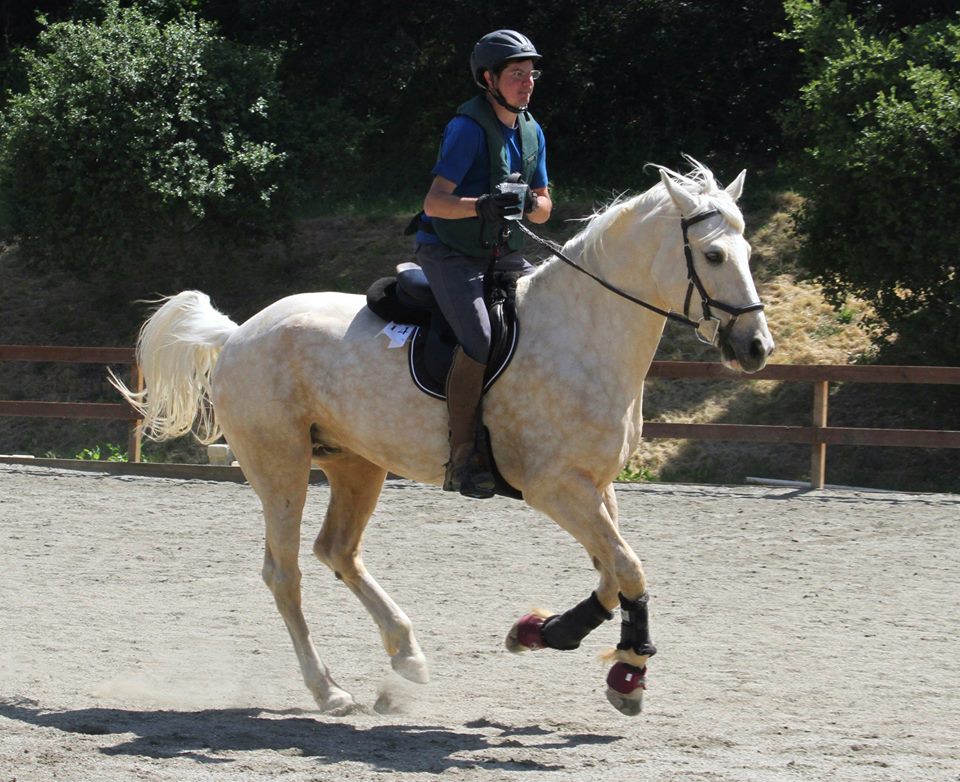 This was a fun event because we actually got to work together. And because Levi is fast and smooth, we won. 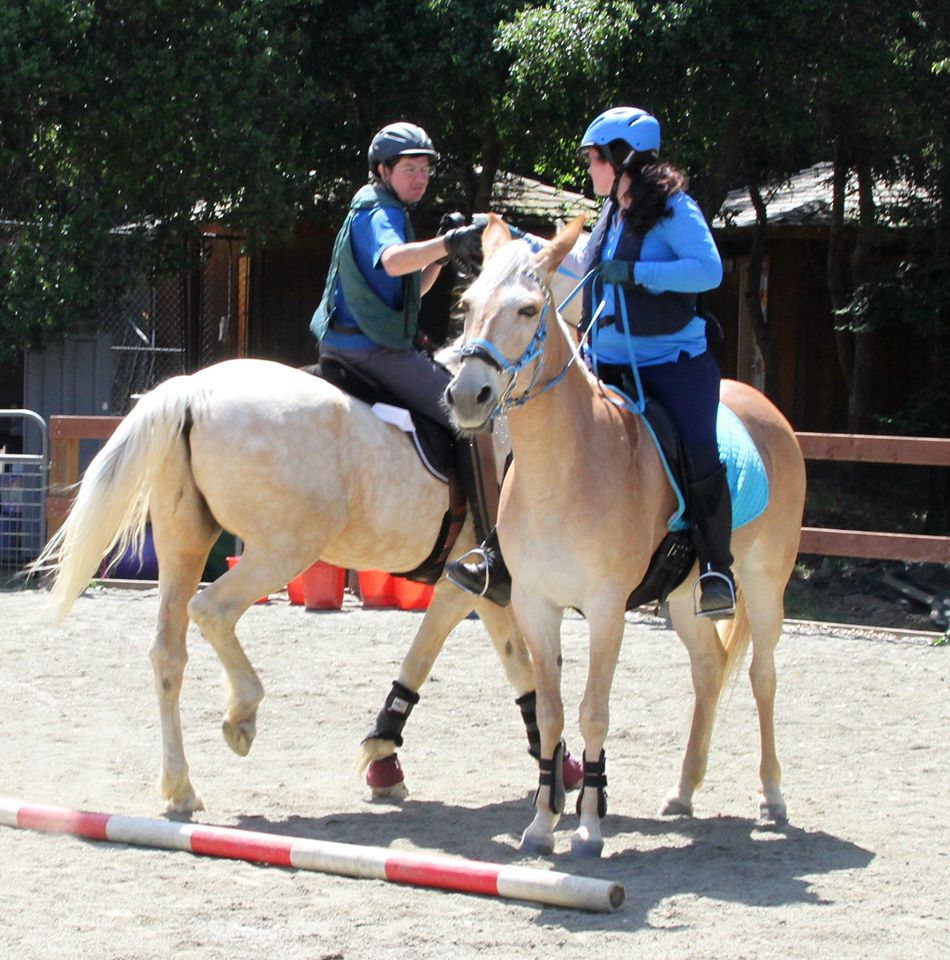 We skipped the apple bobbing race and the toilet paper race, but entered pole bending. This wasn’t a real gymkhana so they didn’t do proper poles and instead made a U around the arena with poles. We went all the way through the U, circled the last one and came back through the U. Since we don’t do real pole-bending so I was okay with the odd design. 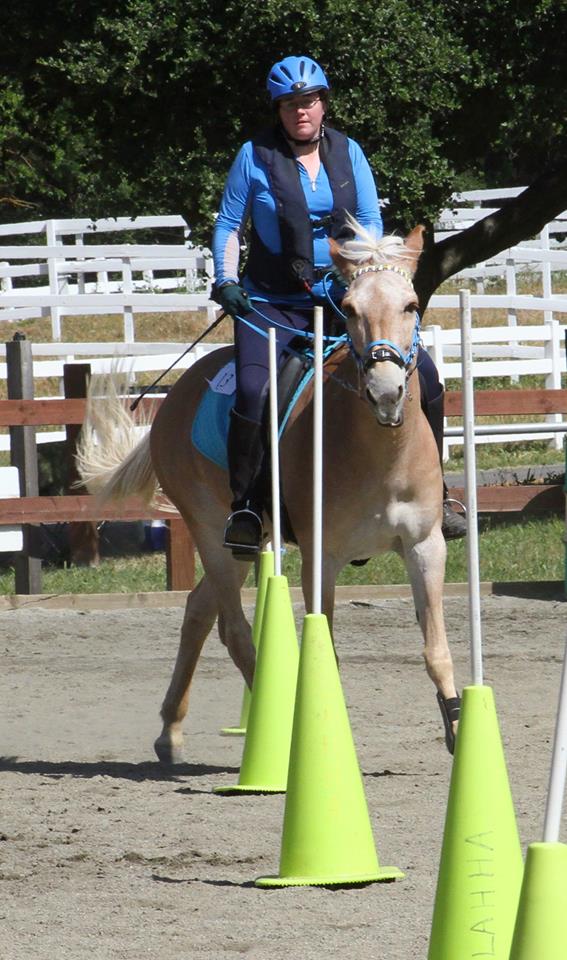 Nilla might hate games, but dressage training came in handy here and we won! Even with only trotting, we just zipped through the cones.

Levi is like trying to steer a banana boat, but they still managed third. 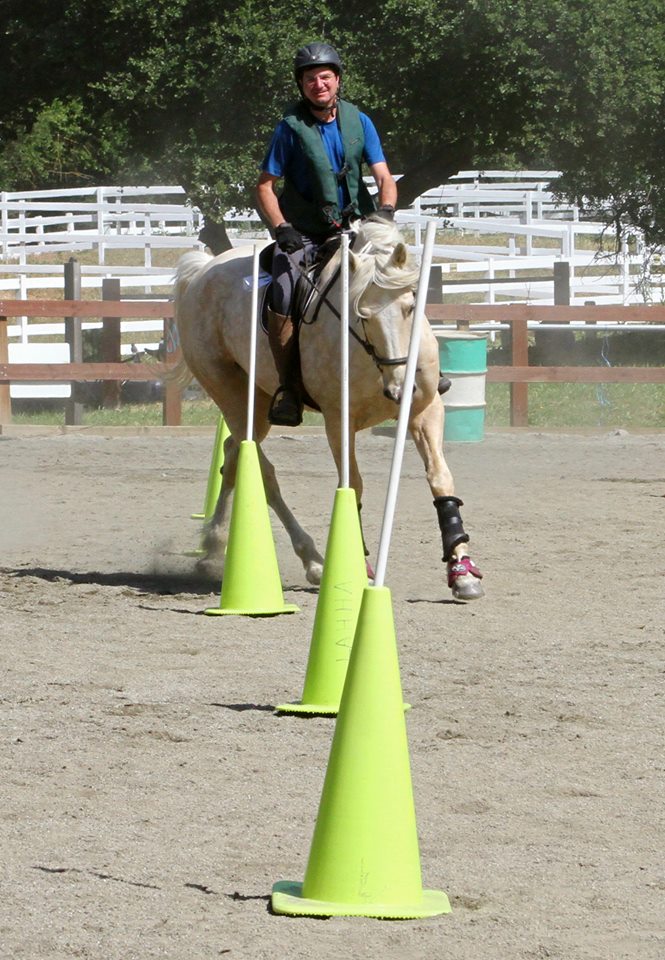 This was a really fun event. It was very low-key and non stressful and it was a great experience for Levi. He kept his brain in his head, behaved himself, and really acted like an ambassador for Mustangs. We had many people asking us where we got him. The girls running the show were so in love with him. When he canters with his neck all arched and mane flowing, he looks like a barbie horse. Since I was waiting in the middle with the girls who weren’t riding (most of whom were petting Nilla and braiding her forelock) I could overhear them oohing and ahhing over Levi. There were many comments of “I love this horse.” 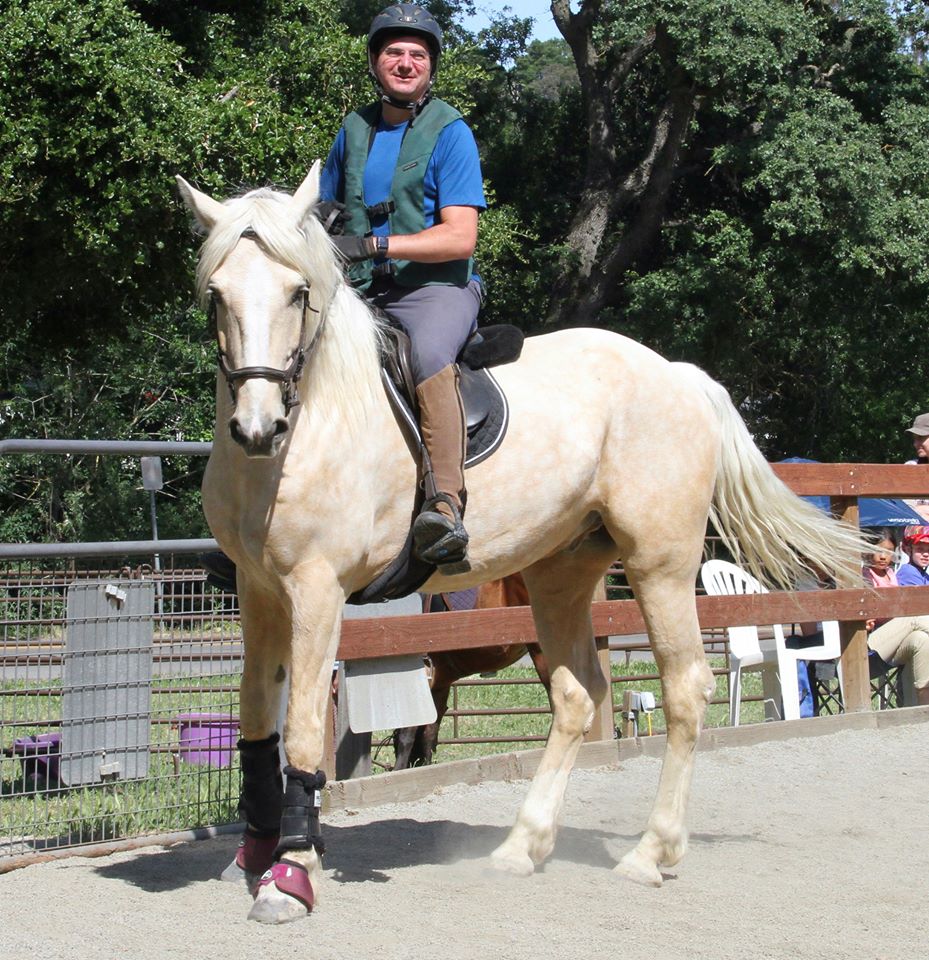 Yes, he’s pretty, I’m not denying that. But the brain is the most important part. He’s still green and not everything is easy, but his default is to be a good boy. He’s a real credit to his trainer, the prison training program, and to Mustangs as a whole.