We were originally supposed to go to the Fireworks endurance ride this weekend. Then our horses conspired to be injured and ruin everything. Theoretically, Nilla is better now and cleared for a return to work, but she’s not ready for an endurance ride. So we decided to go try cattle sorting.

We tried cattle sorting when we were on our Bitterroot Ranch vacation and I’ve been wanting to do it with our own horses since then. Nilla was living on a cattle ranch when I bought her. She wasn’t being used for anything, but I figured she’d at least seen cows and wouldn’t care about them. The inmates actually work the cows at the prison with the Mustangs so we knew Levi had had some experience working cattle although not straight cattle sorting.

The nice thing about this event as that it was a practice sorting so our lack of any skills, knowledge, or ability weren’t a problem. When we checked in, we were referred to some people who have done this for a long time and they were happy to talk to us and give us advice. One of the guys even came over to the fence while we were taking our turns and walked us through it. And – best of all given the insane heat wave we’re having here in the bay area – it was in an indoor arena.

We got there bright and early at 8:30 for sign up and then had time to warm up and check out the huge tack swap/sale that was also going on. Then we went over to the ring where the sorting was taking place and Nilla realized what she was in for. She was not impressed. Levi, however, was so excited. 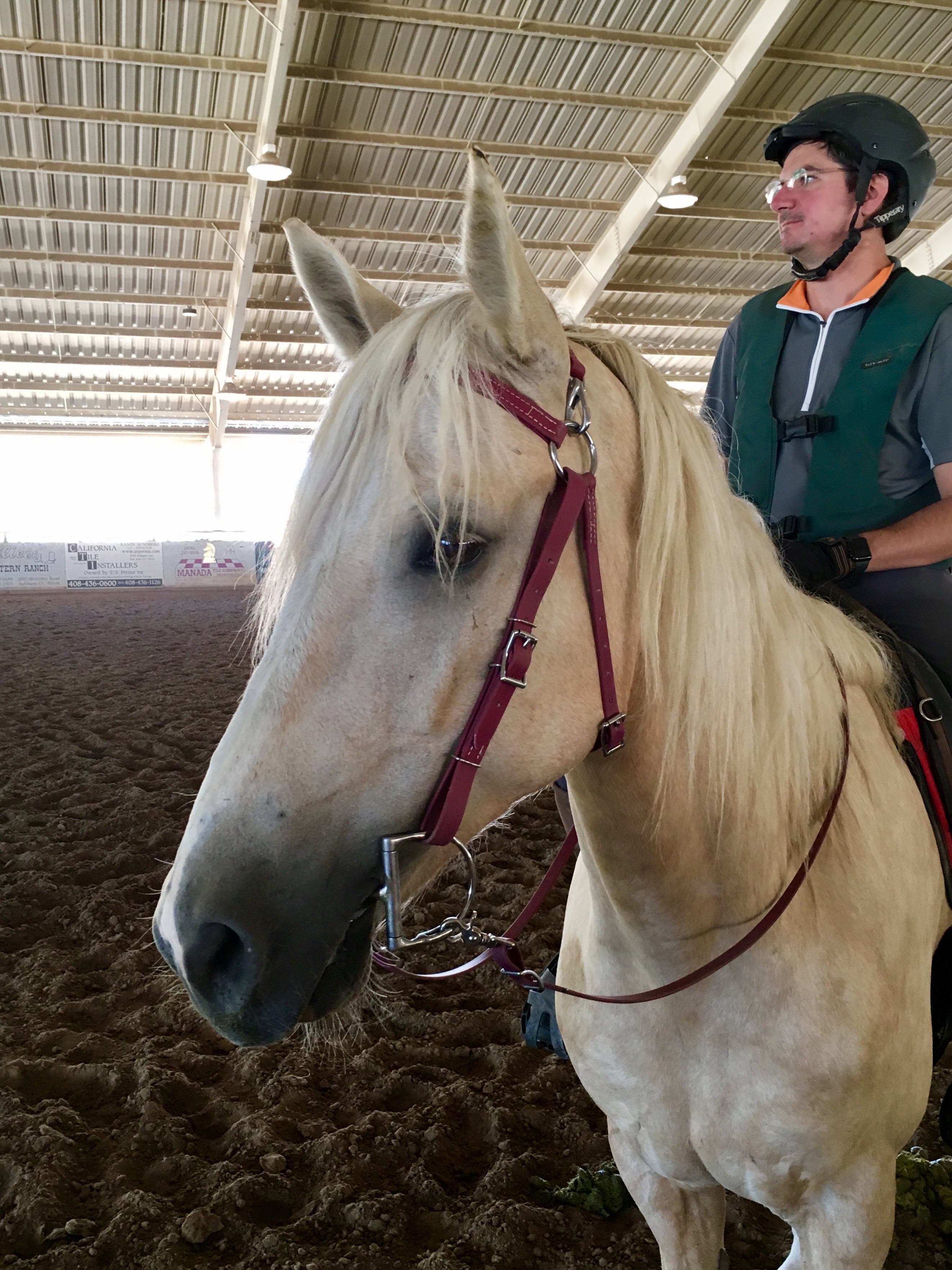 For anyone whose never seen cattle sorting before, I have created this very professional looking drawing to explain it. 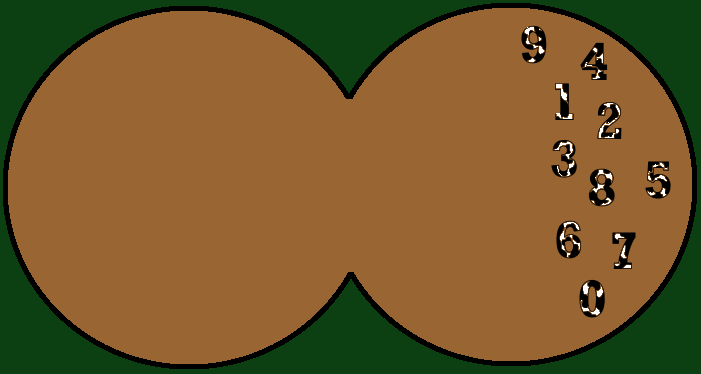 There are two rounds pens attached with an opening between the two and 10 cows numbered 0 through 9 on one side. Two riders enter the arena and are given a random number. The goal is to move all the cows from one side to the other in order starting with the assigned cow. If a cow goes across in the wrong order, you’re out. If you get all of them across, the fastest team wins. Because this was a practice event, no one was getting every cow across and it was more of a who could get the most cows across in the given time frame sort of contest.

For our first round, I took the hole position (this rider stays in the center and keeps the wrong cows from running across) and my husband and Levi went first to try to sort out a cow. We were assigned cow #0 to start with. Levi was really into it, but they failed to get even one cow across.

For our next turn, my husband took the hole position and I tried to sort a cow. I also completely failed to get a single cow across in our allowed time, but the guy running it was nice enough to give us extra time so we could get better. One guy came over to the arena and walked me through sorting the one cow. Nilla, as I suspected, wasn’t scared of the cows, but was not interested in participating in the activity. She really hates games and anything she has to repeat. Here’s her trying to nope right out of there:

But with the additional time and the help of a really nice guy who came over to the fence and walked me through it, we got one cow across. Although Nilla remained unconvinced of the validity of this activity (as evidenced  by her excellent giraffe impersonation).

For our third run, since we were obviously now pros at this, we went back in and owned it:

Please note at 1:30 when Nilla decided she needed to escalate her objections by rearing. Duly noted mule. Levi was happy to step in though. Before we went, the most cows anyone had sorted without having a dirty cow (a wrong number across the line) was 5. We got 7. Boo ya!

After our third round, we took a quick break to let the horses have some hay and water and get some drinks for ourselves. Even with the covered arena, it was starting to get pretty hot. Back for our fourth round, my husband started out and got his cow across. I should have just let them do all of it as Levi was loving it and Nilla was just building a case against me, but we tried and failed to get the second cow across.

Lest you think Nilla’s life is really that bad, I present to you how she spent the entire time we were the in between our turns:

Once she figured out that my husband would scratch her ears, she would only stand in line at a 90 degree angle with her head facing him and begging for ear rubs. 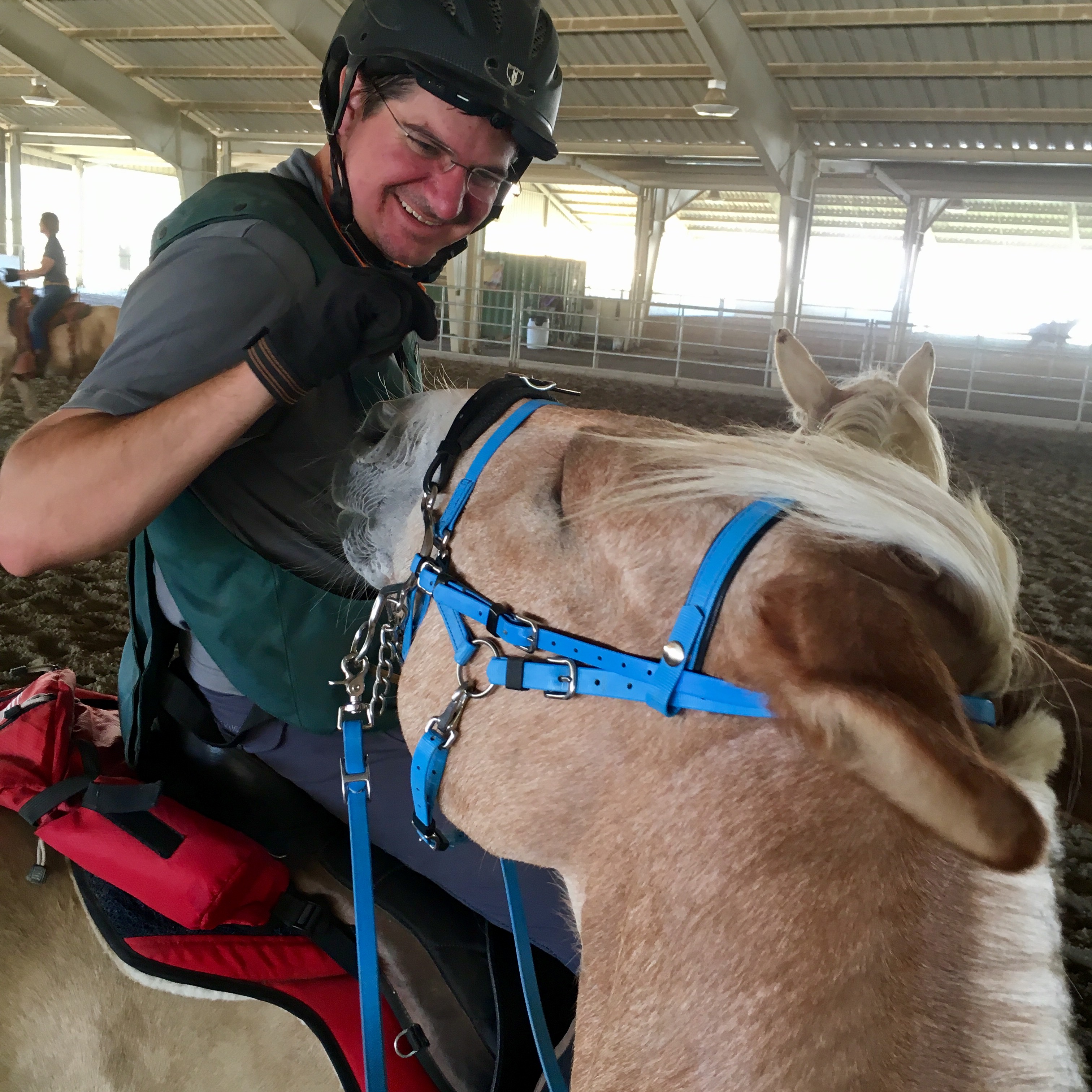 There was originally supposed to be a jackpot event after the practice, but everyone was pretty freaking hot by that point so they were thinking they might not have it. We decided to head home and get out of the heat ourselves. When we got back to the barn, we found that Levi had untied himself in the trailer and must has tried to turn himself around or do something stupid because he was drenched in sweat. We put them out in the arena to roll and he decided to flop out. 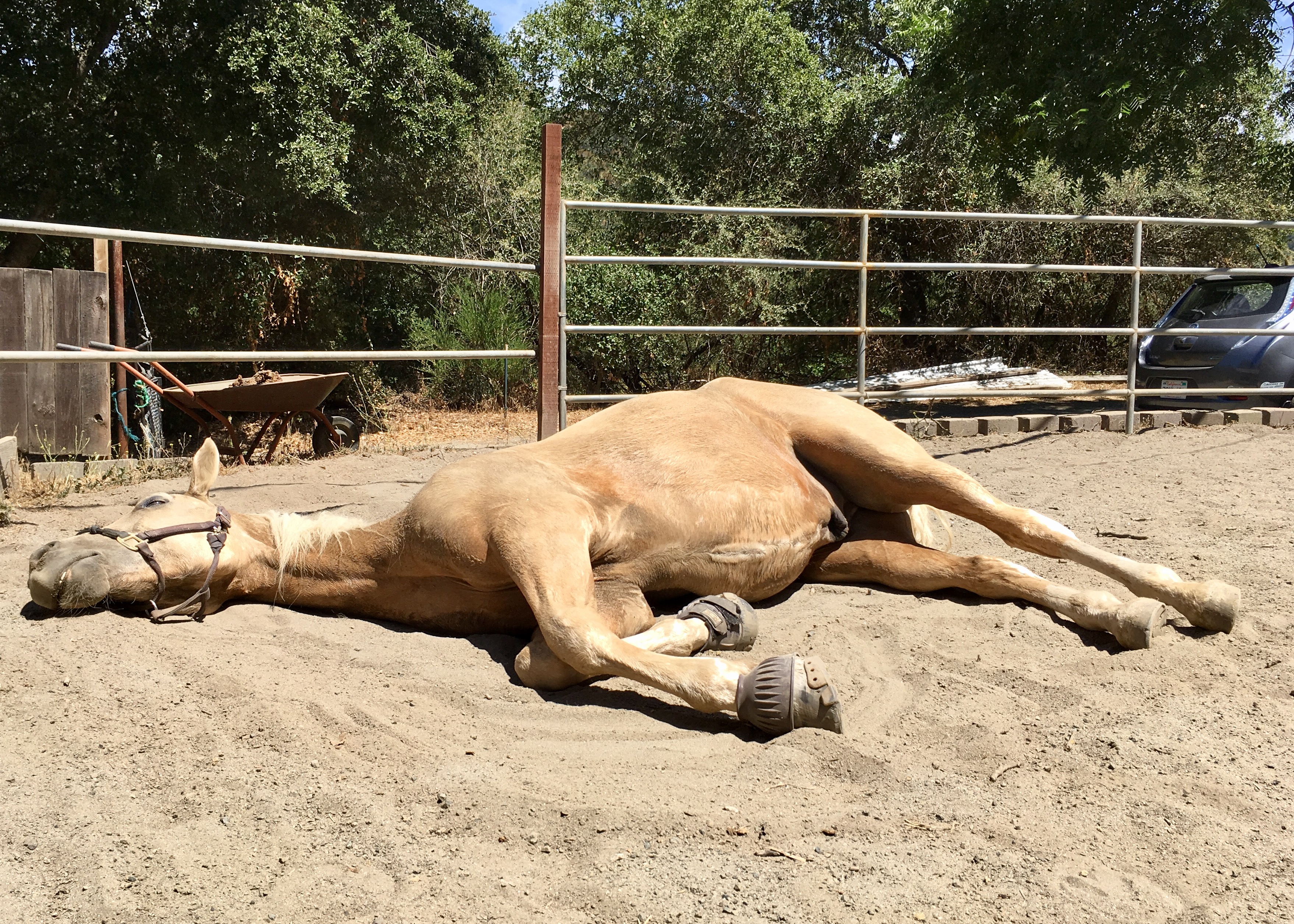 I was a little worried with the heat and trailering that maybe he was colicing, but nope. He just needed a nap. He wasn’t rolling around in distress, he just laid like that for about 15 minutes while we cleaned stalls and got their food together. Then he was up and walking around, eating, drinking, and eliminating like normal. Poor guy, he’s back out with Eugene instead of Nilla and Eugene runs him around all the time. I think he’s just exhausted.

Has anyone else ever tried cattle sorting or ventured outside of your usual riding routine? I love trying new things and cattle sorting was a lot of fun; I would totally recommend it.