I’m tired of living in California. The cost of living is outrageous and the traffic is a nightmare. There’s supposed to be nice weather to make up for it, but that hasn’t been working out for the past few years. If it’s not a drought, it’s flooding that’s wiping out roads.

And then yesterday I received this text from my barn owner: 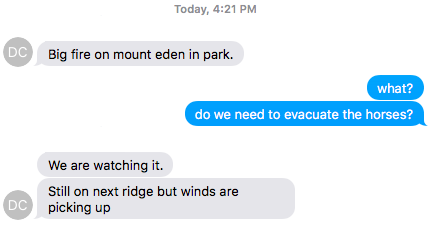 A few years ago, we debated buying a house up in the hills. The only way for us to afford horse property in this area would be to move far out into the hills (not in the expensive hills area where we live now which is actually close to things). While we knew in theory that wild fires are very common in California, actually being faced with one near you is different.  When the Loma Prieta fire broke out 30 minutes from our barn and forced the Quicksilver Fall Classic to be rescheduled, we felt like even that was too close to home and gave up on wanting to own property here. I don’t want to spend my life worrying about my home and animals being destroyed in a fire.

So this text was pretty terrifying. Because Mt Eden road is only a few miles from my barn. I can -and have – ridden from my barn to where this fire is. And the pictures my barn owner was sending me were not making me feel any better. 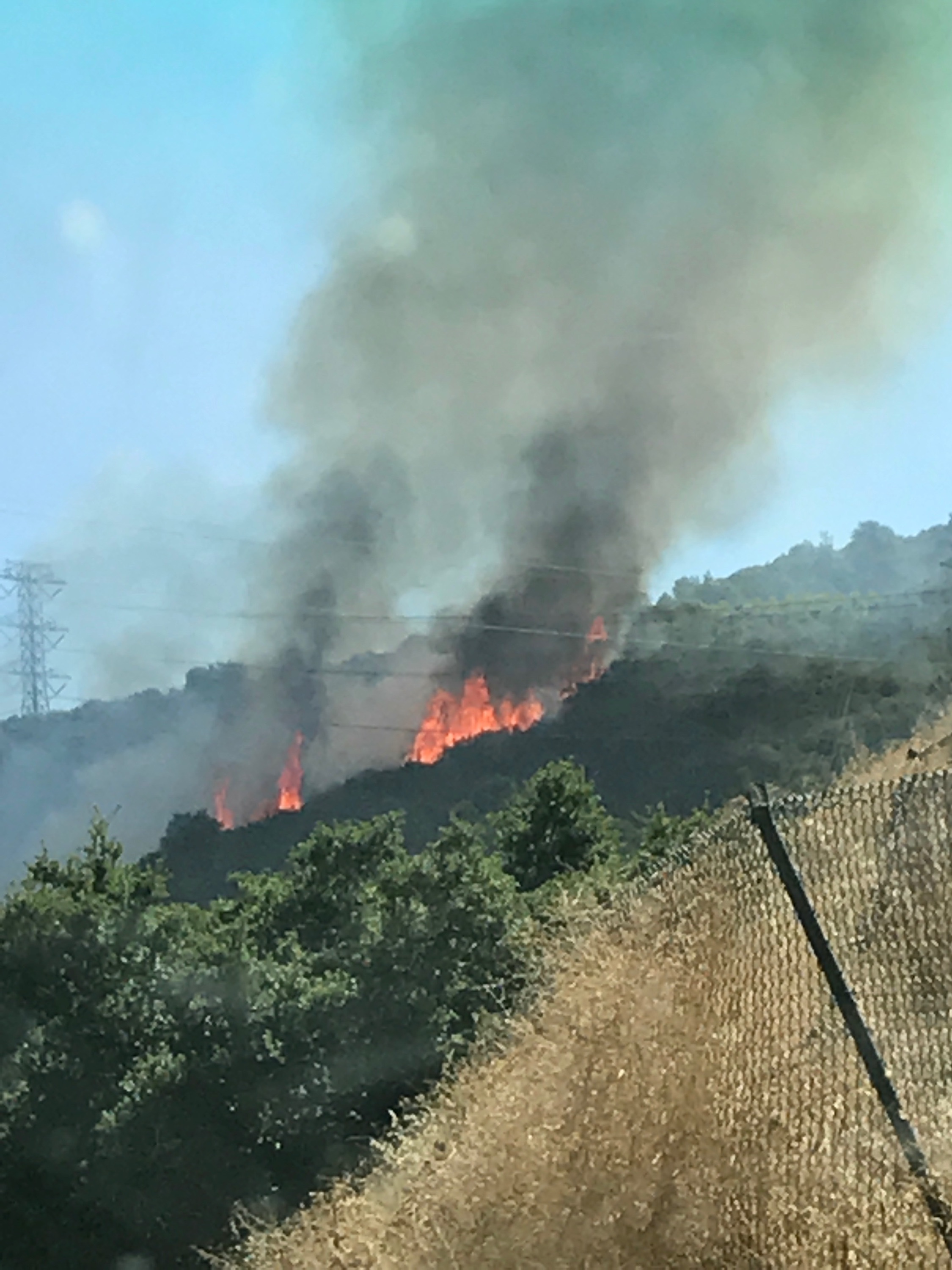 Thankfully, where this fire broke out is very close to a big winery and concert venue as well as a lot of very expensive houses (think multi-million dollar mansions) so firefighters were all over it. They had planes dropping retardant right away and over 150 firefighters fighting it within hours. 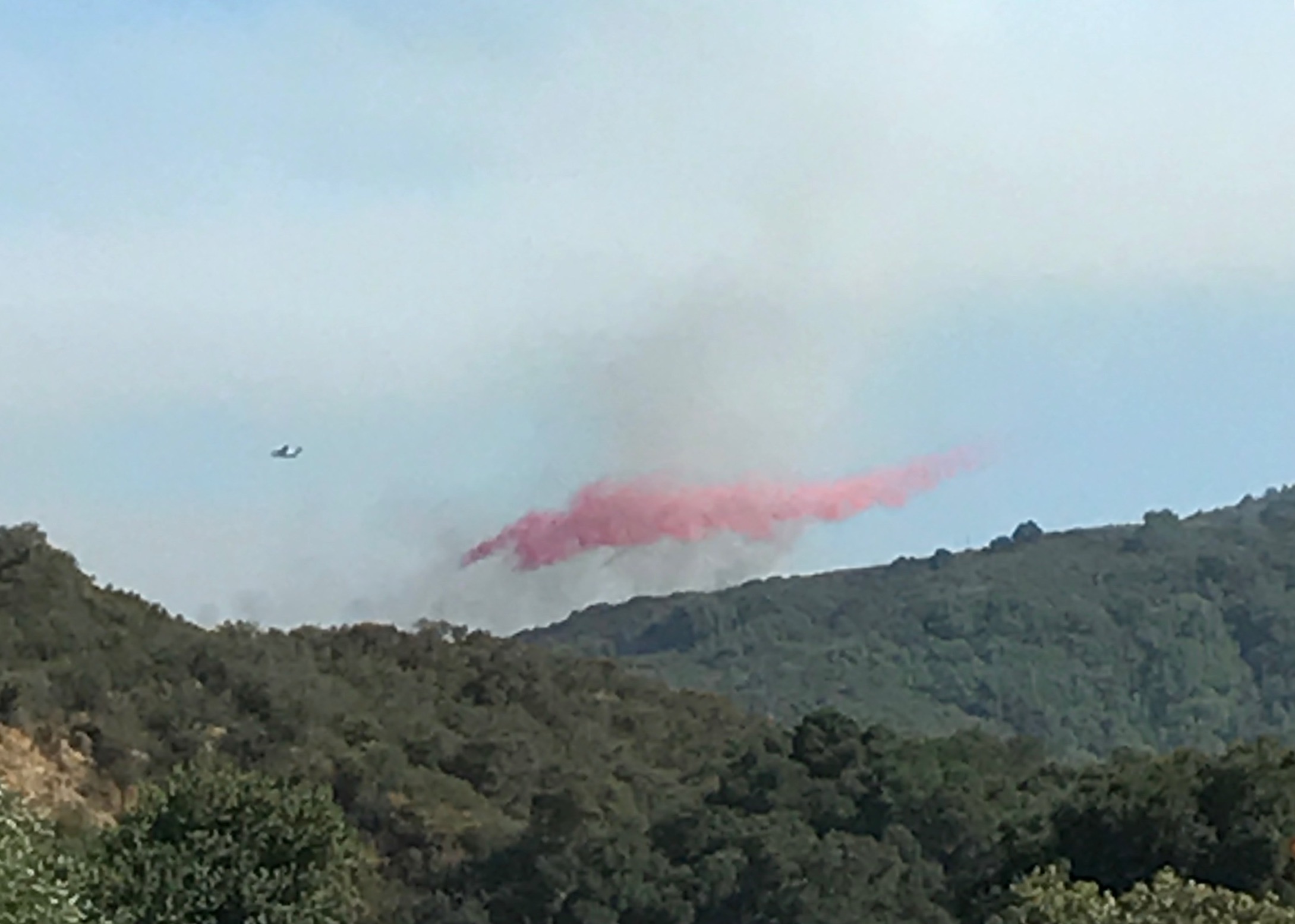 I waited for my husband to get home from a dentist appointment and then we drove over to the barn taking our truck keys with us in case we needed to trailer horses out. They had put a shelter in place warning in effect and I was worried they’d close the road to the barn. Thankfully, the road was open to our barn, but closed about a mile down.

Once we got to the barn, I wan’t to go get a closer look. So we saddled up Nilla and Levi and rode over to a spot near our barn where there’s a good view of the valley. The flames had been knocked down by the fire retardant and were just on the other side of the ridge, but we could see the smoke. 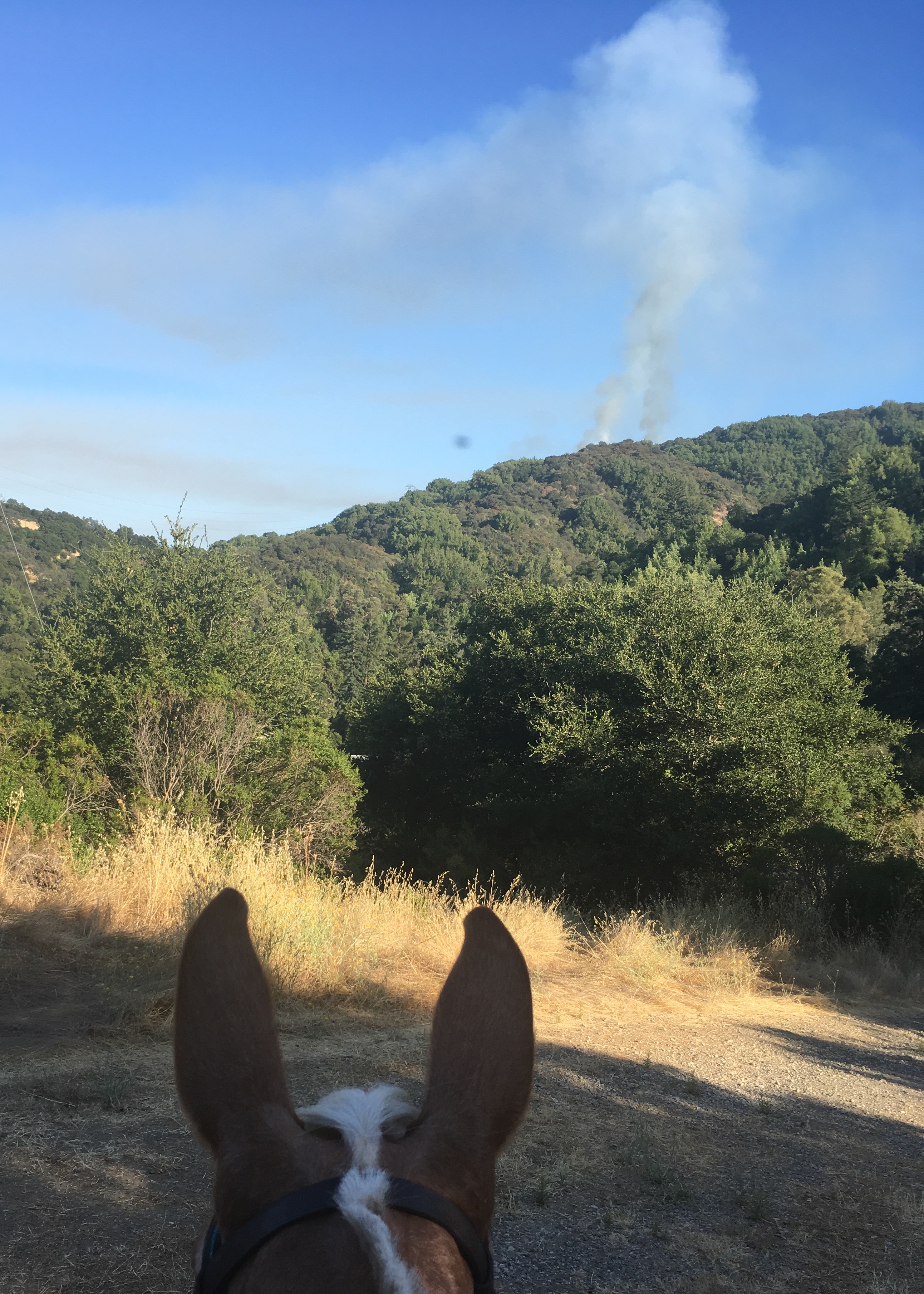 Does that look far away? I promise you it’s not. It’s about 1 mile away as the crow flies. Or, you know, as the helicopter flies:

We were actually on the way back to the barn when we saw the helicopter go by and raced back up to the view point to watch them dumping water on the fire. They were going so fast between the reservoir and the fire that I timed it at 3.5 minutes for a round trip. It was actually a really amazing thing to watch. Kinda takes your mind of the threat of imminent doom.

Surprisingly, our horses were totally okay with the helicopters flying overhead. And I do mean overhead. Back at the barn, they were flying directly over us and it was insanely loud.

Thankfully, the fire is already 40% contained and it looks like we won’t need to evacuate. As of the time I wrote this, no one had been injured and no property destroyed. Nonetheless, I don’t want to live here anymore. And if you think that’s a rather extreme reaction to a fire that hasn’t done anything to me, I agree. It’s not really about this fire. This fire is just another straw on an already broken camel’s back.

52 thoughts on “Why I Hate Living in California”