After our success at Camelot, I wanted to take Levi schooling at Woodside. I’m hoping to move up to BN this year Woodside’s course still has water in it from their August event so I thought it would be a good chance to get some more practice. I met Kate there bright and early 2 Fridays ago with a goal of just exposing him to as much as possible.

When I first starting jumping him, Levi stopped at every new jump the first (or two or three) time(s). While he’s gotten considerably better, he’s still green and new jumps often need a second look. Which is really not ideal for cross country. Especially since a real  event won’t let me school the entire course the night before like Camelot does. But every time he does cross country, he learns and he’s better the next time. So we practice.

Kate had us start with the log and then go down the hill to the ditch complex. Levi hopped over the log on the first try – which was awesome – and then said nope at the ditch. Which I totally expected. This was a much deeper ditch than any he’s seen before. And this horse has always hated ditches. And changes in footing that might be ditches. And shadows that might be ditches. So a real and deep ditch was going to be a problem.

Eventually Kate had to walk down the hill to lead him across for him to realize it was not going to kill him.  We practiced a few more times and he remained sticky, but we did eventually get across without stopping.

Once we had some success with the ditch, we did the log to the coop, which has been an indiviudally numbered combo at BN for the past 2 Woodside events. You can’t really tell in the video, but Levi – fresh off his ditch conquest – lands “playing” and I had to really work to get his attention back and then he was surprised about the second jump, but he popped over.

Next, we hit up the first water complex where we started by circling the water jumping little logs and just working on changing/controlling his pace. Then we went through the water to the little cabin. I’ve never jumped him straight out of water, but he was totally cool with it. When we first got him, getting him to even touch water was a huge process. And our wet winter was not fun with him balking every time there was a puddle. To canter through water and jump after like it was no big deal is a big deal to me. He’s come so far.

Kate had us do the first fence backward, go past the start box, and come down the hill to the cabin into the water. Levi took the fence fine, tripped 3 times going down the hill even though I made him trot, and then rocked the cabin to water. Although he was being so much better about water, it’s hard to put old fears away (this horse used to throw temper tantrums about touching wet ground) and I was a little worried he’d peak at the jump with the water behind it. But my fears were completely pointless.

Sadly, his newfound confidence did not extend to the rolltop with cutouts and we had a stop. But a simple circle around and he popped right over.

We went back and forth over this a few time to get his confidence up. He was still looking at it – and he damned well wasn’t going to let it touch him – but he did go over. 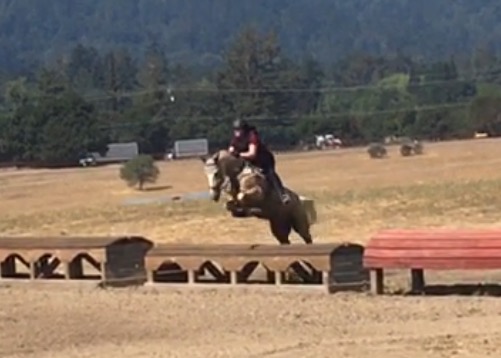 We then went from the scary cut out jump through the water and out over the cabin.

Kate wanted us to try going from the start box over the first 3 jumps. However, they were watering the course while we were there and I didn’t trust the footing. I’m sure normal horses could deal with it, but Levi can’t even manage to trot down a DRY minor incline without tripping three times, I didn’t want to try to jump something in the mud.  We did 1, skipped 2, went around to #3 and he popped over that. #3 was good because it was new jump, it was different looking than the other jumps, he definitely backed off and looked at it, but I was able to get him over it without stopping the first time. Progress.

Maybe we have a chance of not getting eliminated for refusals at a real event? It was a rather short schooling since I had to get to work, but it was a good experience for Levi. Every time we do cross country, he gets better and better. I might actually be getting better too. I made a really concerted effort to grab the neck strap and keep my hands down and not punish him for the habits Nilla instilled in me. Now if I could just learn how to sit back, I might not be too terrible at this. Maybe. Eventually.

*A winner has been selected by random draw for the TSF girth. As soon as I hear back from them confirming their information, I’ll officially announce the winner.