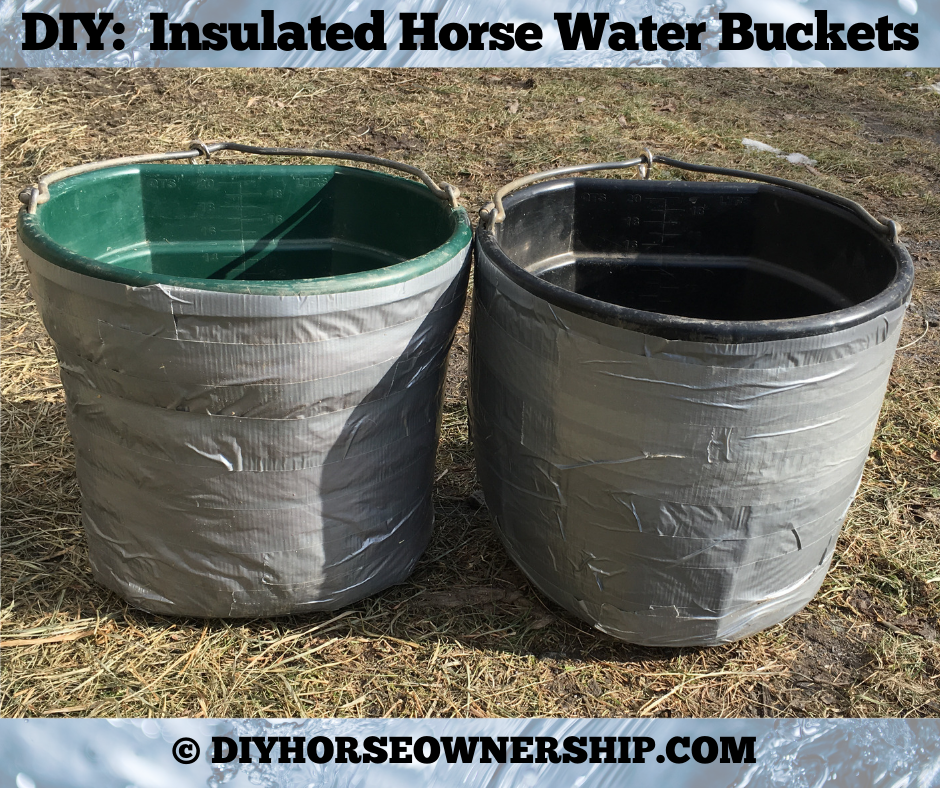 When we first started thinking about moving to the frozen tundra of Vermont, I knew we’d need heated waterers. It was always part of our budget for a property wether we had to add them to an existing barn or to one we built. What we didn’t count on was the shocking dearth of plumbers. Finding a plumber who would return my calls was frustrating enough. Finding one that services my area was worse. And finding one who isn’t completely booked up for the forseable future proved impossible. I did manage to find a good plumber to fix some of the barn plumbing – we needed to move the hot water heater from the bottom of the bank barn into the heated tack room and heat tape and insulate the pipes (the previous owner went to NC for the winter and the barn wasn’t set up for winter use). However, despite my wanting to pay him money for a large project, he was booked up for anything more than quick projects and wouldn’t take on installing the heated waterers. 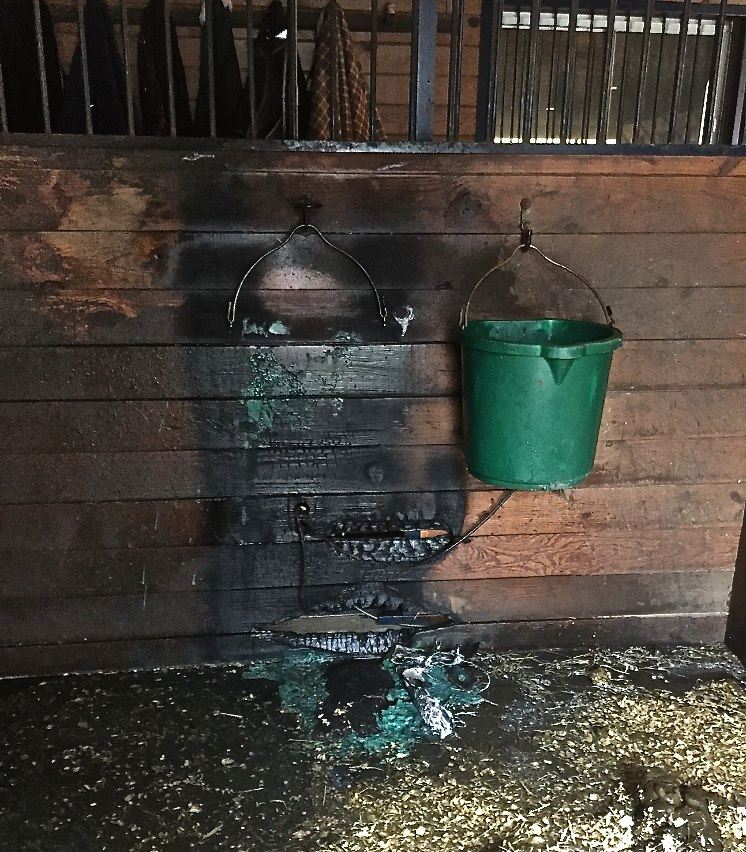 While we’re still planning to install the Nelson Waterers – which keep water warmed but in a safe way – we need it to be not freezing cold outside while we’re doing it. My husband is actually taking a plumbing class so we can do this ourselves – and also it’s a super useful skill to have for minor projects. I may take the class too at a future date. That said, with heated waterers being a next summer project, we needed a way to keep the horses’ water warm in the meantime.

Enter insulated buckets. I looked around online and found a few different ways of insulating water buckets. While the two buckets with foam in-between looked great, that involved buying second larger buckets. The bubble wrap and duct tape method seemed best. Especially given that we had just moved across the country and had tons of free bubble wrap. I opened lots of boxes marked fragile, gathered stacks of bubble wrap, some packing foam, duct tape, and – to try something a bit different than what I had seen online – some Reflectix – which is basically bubble wrap, but with reflective metal sides and sold at Home Depot or other stores in the insulation section. 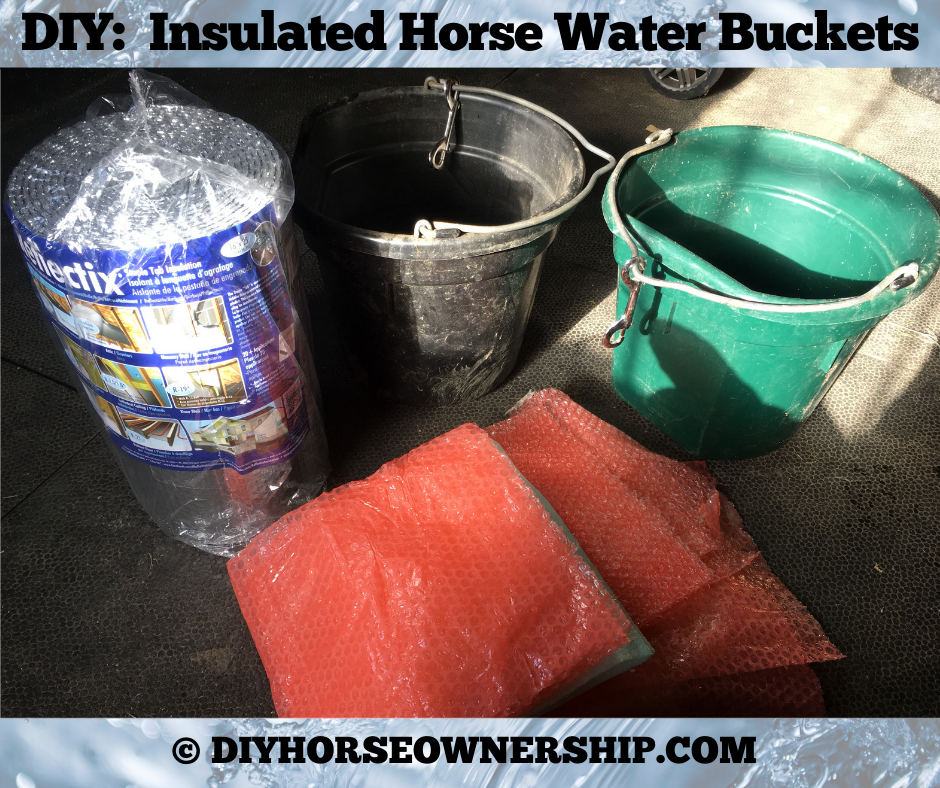 Sadly, I got very few pictures of this project because I was doing it on my own and didn’t have a 3rd hand for picture taking. Luckily, it’s really easy. You basically wrap the bucket in bubble wrap (and in my case some packing foam too). 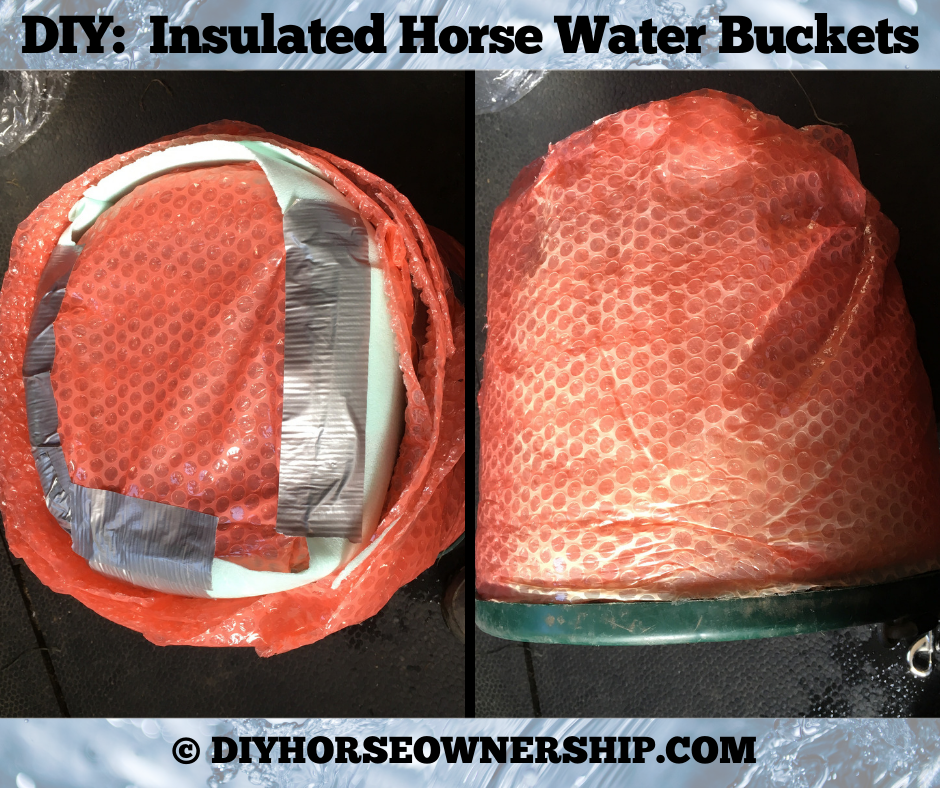 I found it helped to duct tape some pieces down – especially around the edges – to keep things still as I went along. Once you’ve got several layers wrapped around the bucket, cover everything in duct tape. I made one bucket with just the regular bubble wrap. 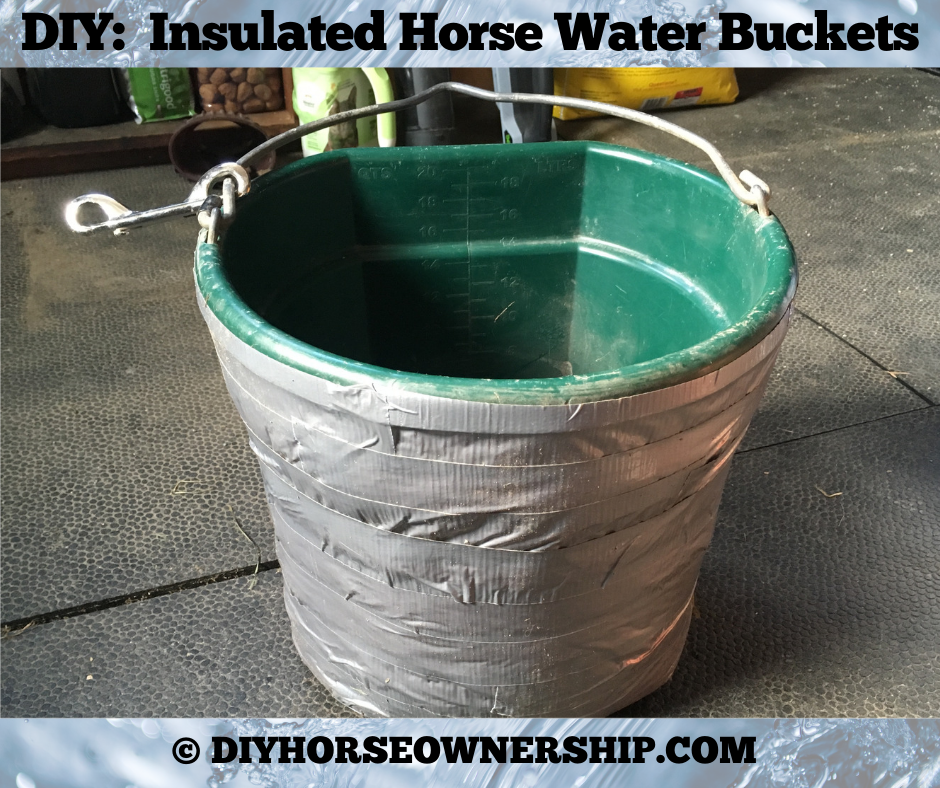 Then I made another bucket with the reflective wrap. I used the regular – in my case free – bubble wrap for the majority of the layers and just used one layer of the reflective wrap to keep costs down. The Reflectix is only ~$16 a roll, but free is still cheaper than $16 and I managed to cover 4 buckets with one roll of the Reflectix doing just one layer and I have some left (1 roll should make 5-6 buckets I think). I think 1 roll would do maybe 2 buckets if you only used it. Regular bubble wrap is about 1/3 to 1/4 (depending on where you buy it) the cost of Reflectix if you don’t have stacks of it lying around like I did. Sadly, I got no pictures of making that one until the end.

They were super easy to make and didn’t take very long at all. I think about ~15 minutes for the later ones. The first one probably took 20-25 minutes as I was figuring it out. The cost was great too. I think each one probably cost me about $5-$6. Even if I had to buy the bubble wrap, the cost per bucket would probably still be <$10.

The price is great, but I know what you’re wondering, because I was wondering this too. Do they actually work?

The answer is an astounding yes. 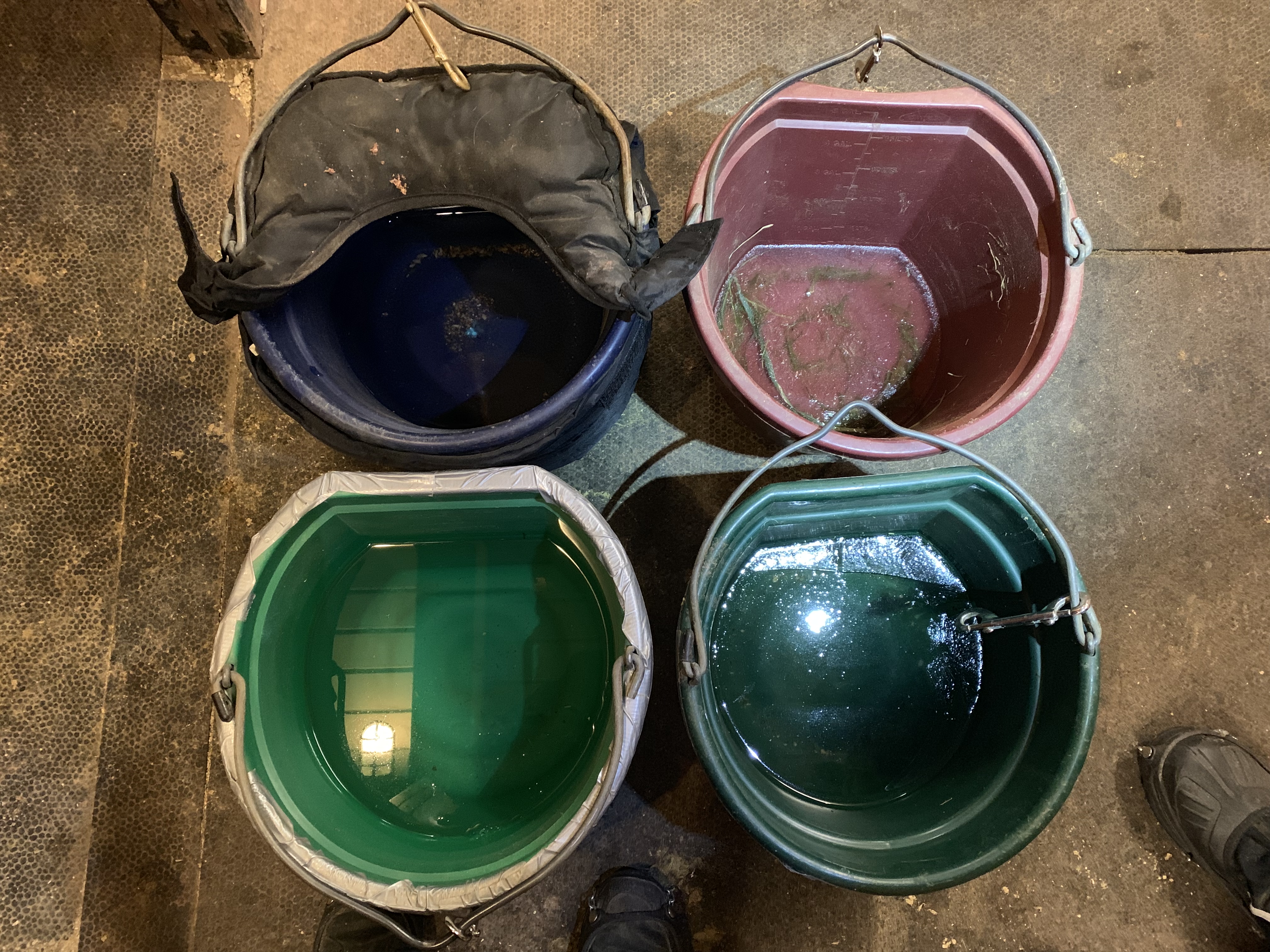 I really want to do a timelapse video to show just how well these buckets work, but I haven’t gotten around to it yet, so here’s a poorly lit picture. For added comparison, Nilla’s bucket has the SmartPak Insulated Water Bucket Cover on it and Levi’s bucket is uninsulated. Why is Levi’s bucket uninsulated, you might ask?

Because Levi is the living embodiment of the phrase “this is why we can’t have nice things.” 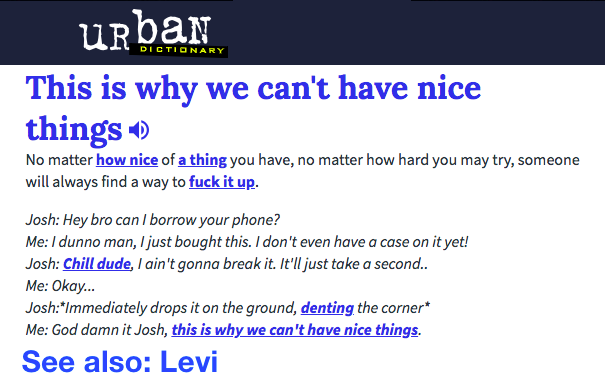 Seriously though, he shredded his so now he doesn’t get one. 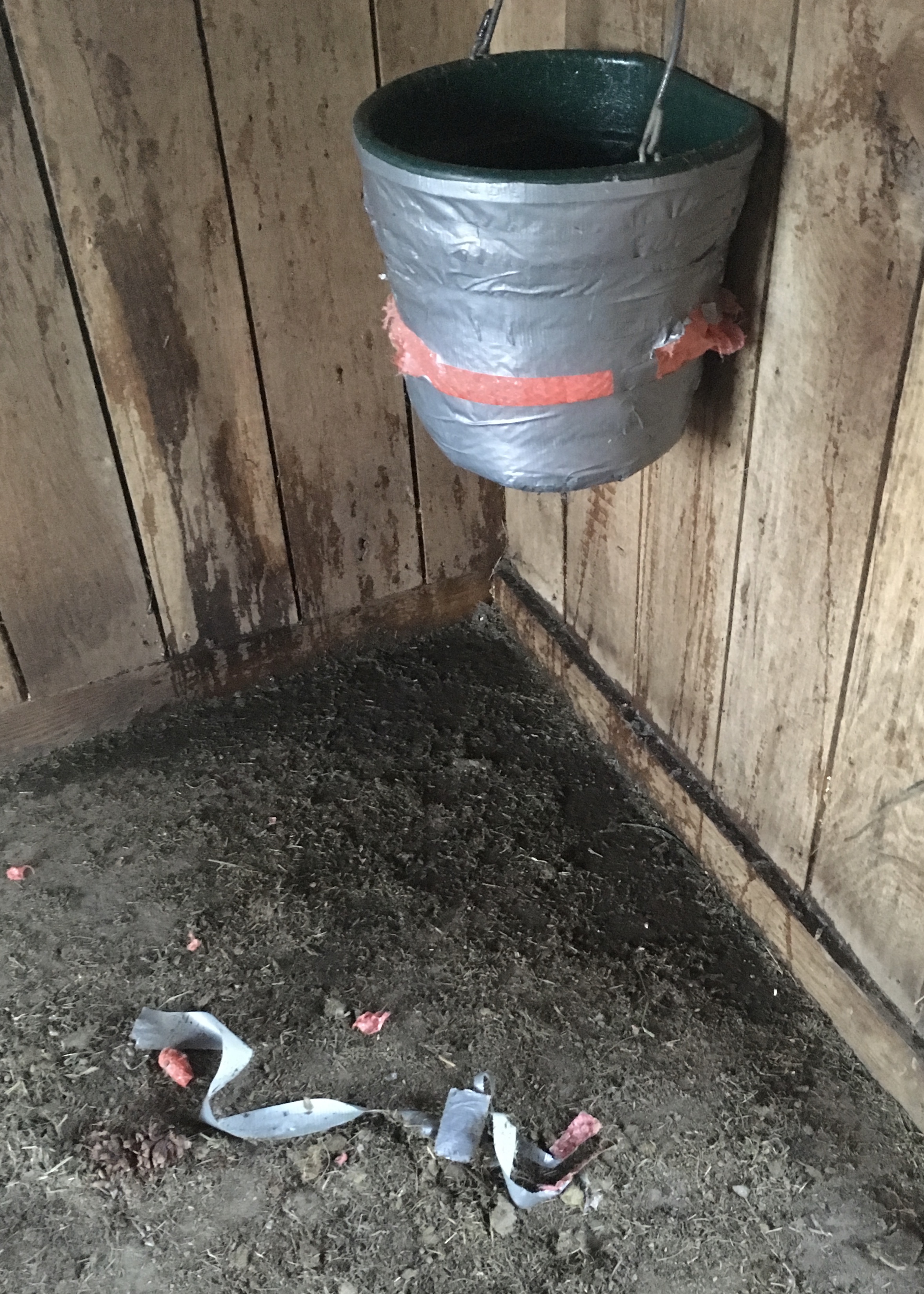 This is a downside to this type of insulated bucket. If you have an incurably mouthy *asshole of a horse, this isn’t going to stand up to them. Then again, I don’t think SmartPak cover would survive him either. Possibly the foam method would work. 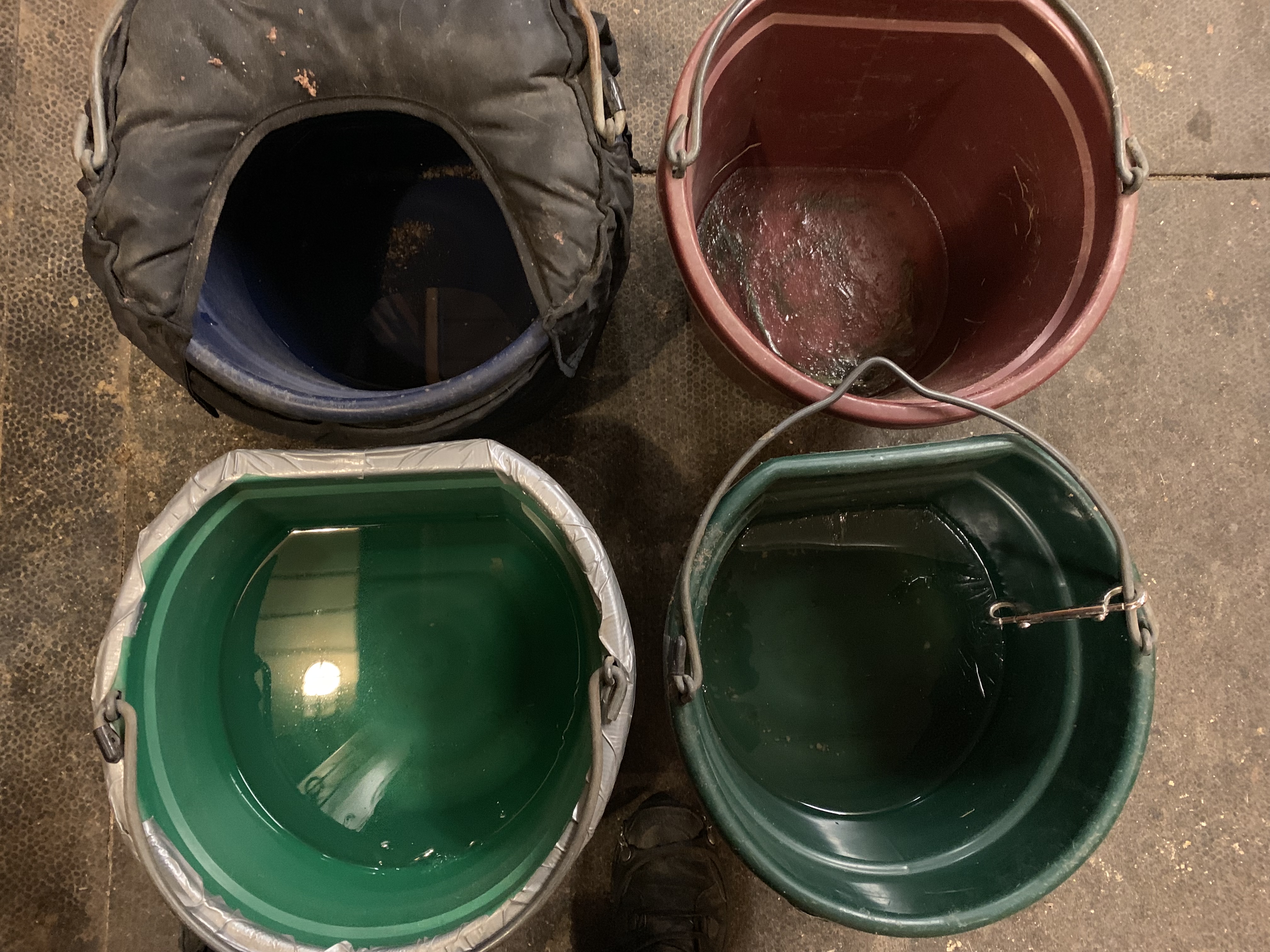 Anyway, in this picture of all 4 buckets, you can see that Nilla and Eugene’s (on the left) are completely free of ice. Shasta’s – the green one on the right- has a very thin layer of ice on the top. Levi’s is iced all the way around (his was nearly empty). I took a picture of those two after dumping them. The lighting wasn’t great in the barn at night so I threw the picture into an editor and jacked up some of the effects so it looks weird, but it does help you see how Levi’s has developed a thicker layer of ice all around the sides and bottom. Shasta’s only has a the skim on top. 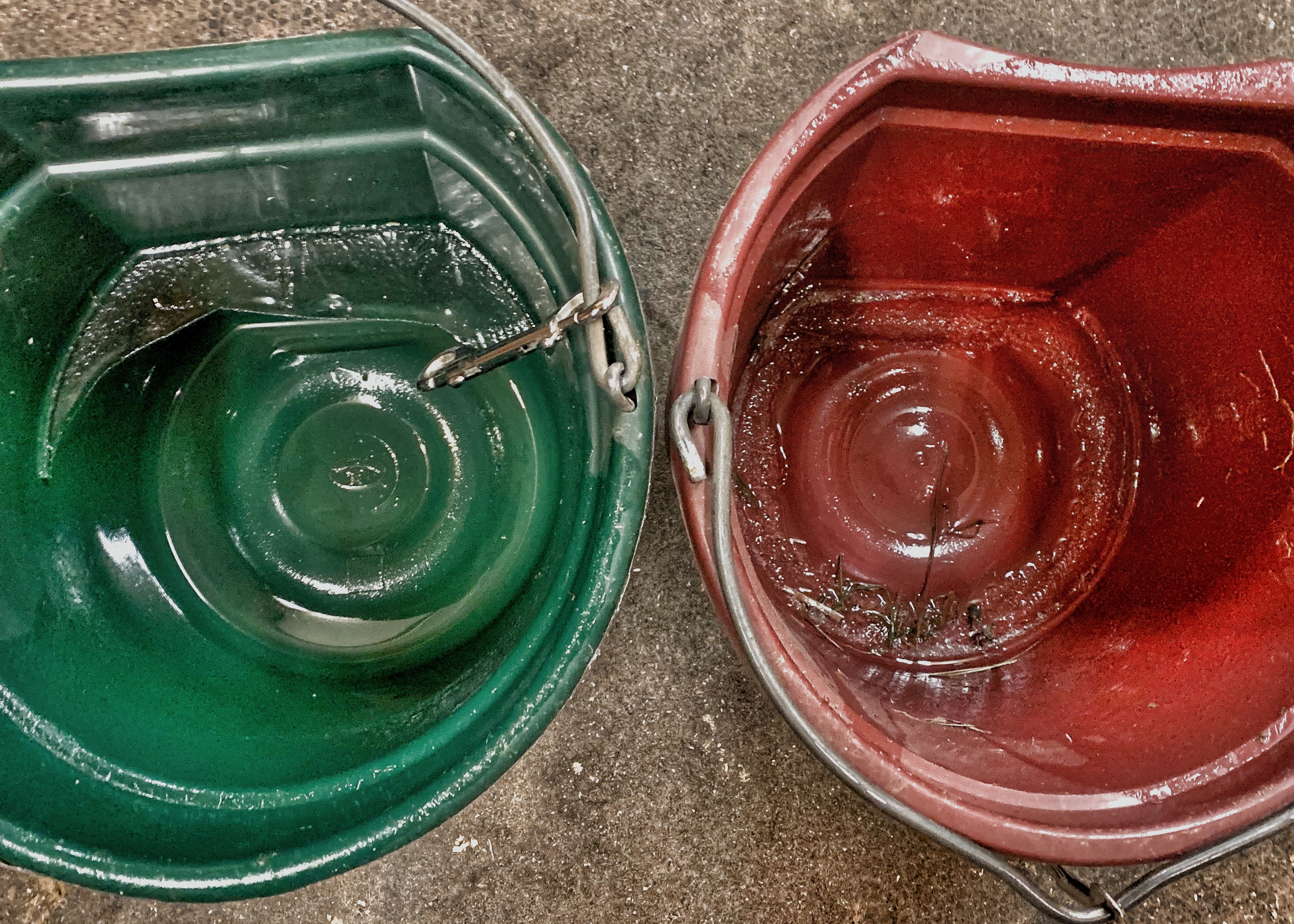 I will say I think the SmartPak cover works even better than the DIY buckets. Nilla’s stall is a lot colder than Eugene’s (reasons I’ll get into in another post) and her bucket started freezing before everyone else’s before I added the covers. I bought the SmartPak cover back when I did the other ones because I was curious if my DIY covers could work as well. For the most part, they have. However, the temps were only in the high teens evening when I took these pictures. When the temps get below 0 the DIY buckets get more iced than the SmartPak one. They still get significantly less ice than the uninsulated one. I’d like to try making a duct-tape lid for one of the DIY ones to see if that helps. If you’ve got lots of $ to spend or don’t like Doing it Yourself, the SmartPak covers cost $45 and really do a great job. The DIY covers only cost about $5-$10 though and do a pretty damned good job as well.

I highly recommend making some of these if you ever worry about your horse’s water freezing.

As a side note, if you’re thinking “My horse has been living in the cold forever. He knows how to break through ice to drink, and doesn’t need warm water,” you should really read this study. To sum it up though: In the winter, horses will drink more water when the water given to them is warm, but will chose cold water – and then drink less – if offered a choice. Since I want my horses drinking as much as possible – especially in the winter – I want them to have warm water. Even with the insulated buckets, I like to mix in a little hot water to my horses’s buckets when I fill them. The insulated buckets will keep that water warm too. I’ve hung an insulated bucket outside in the wind with some hot water mixed in and found it still nice and warm hours later.