I know, I know; everyone just wants the damned plans for the feed bin, not a schooling show recap, but I need to take more measurements first so you’re getting jumping pictures for now.

Last weekend, we went to our first show of 2019. The GMHA Jumper Schooling show was a clear rounds show – you get a blue ribbon if you go clear and nothing if not. Since we only own two arena jumps at the moment and they’re all strait wood brown, the main goal of this excursion was to practice getting the boys around a full course of colored jumps. Clear rounds was perfect.

Since we’ve never shown at GMHA, I wasn’t sure if the divisions would be at height or soft. Signing up in advance, I considered starting at the crossrails division, but my husband convinced me that’d be dumb and I consented to start at the 18″ division. The heights were all soft and a few of the jumps in the 18″ were crossrails so that ended up being a perfect height to start at. 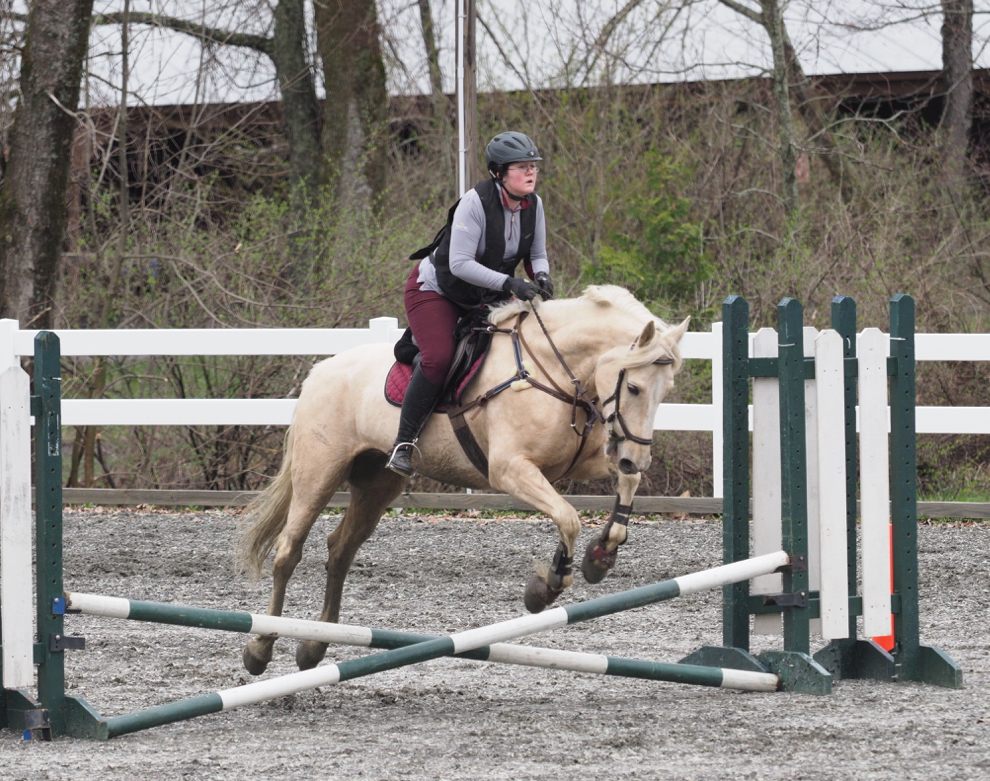 Levi likes to be stupid about jumps he’s never seen before, but either the height was low enough to bore him or he’s grown up. Since he skittered to a near stop and then lurched drunkenly over the first tiny jump in warm up, I have my doubts about either of those things. Anyway, he was great all day.

We had a long break before the 2-2’3″ division so he went back to the trailer to chill with Eugene. The next division remained soft and was more like 18″-2′. I had signed up for 2 rounds at this 2′-2’3″ because 2’6″ is where Levi starts getting dumb. Rather, he’s always dumb, but when the poles go up, I need to be a better rider to stay on when he does something awkward. And I’m not. 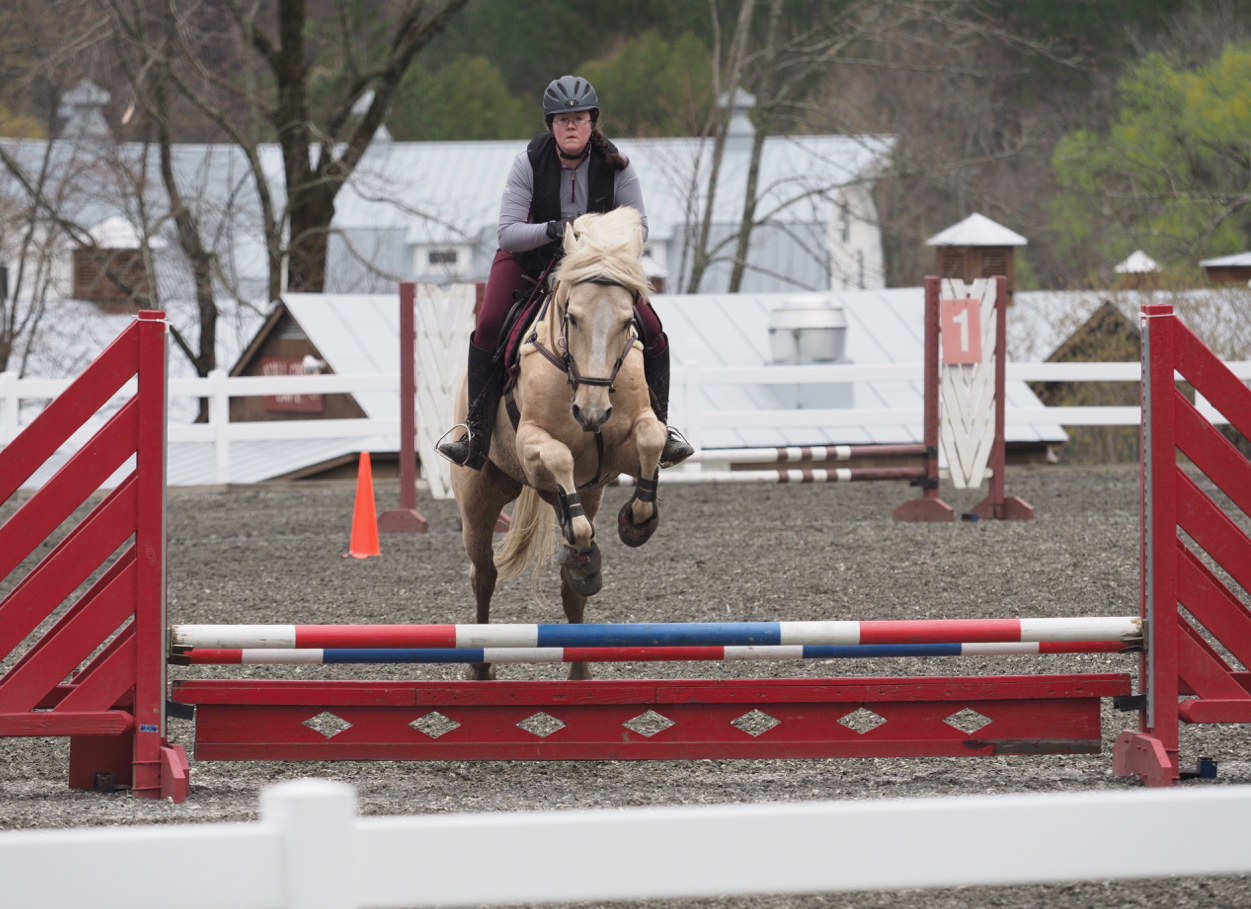 However, if i’d known the divisions were going to be so soft, I would have done 2’6″. That division ended up being actually 2’3″. While going a bit higher would have been nice for the challenge, it was also nice to go in and get around a course three times without any issues. Levi was responsive and listening to me, we didn’t knock anything down, or have any temper tantrums. Success. 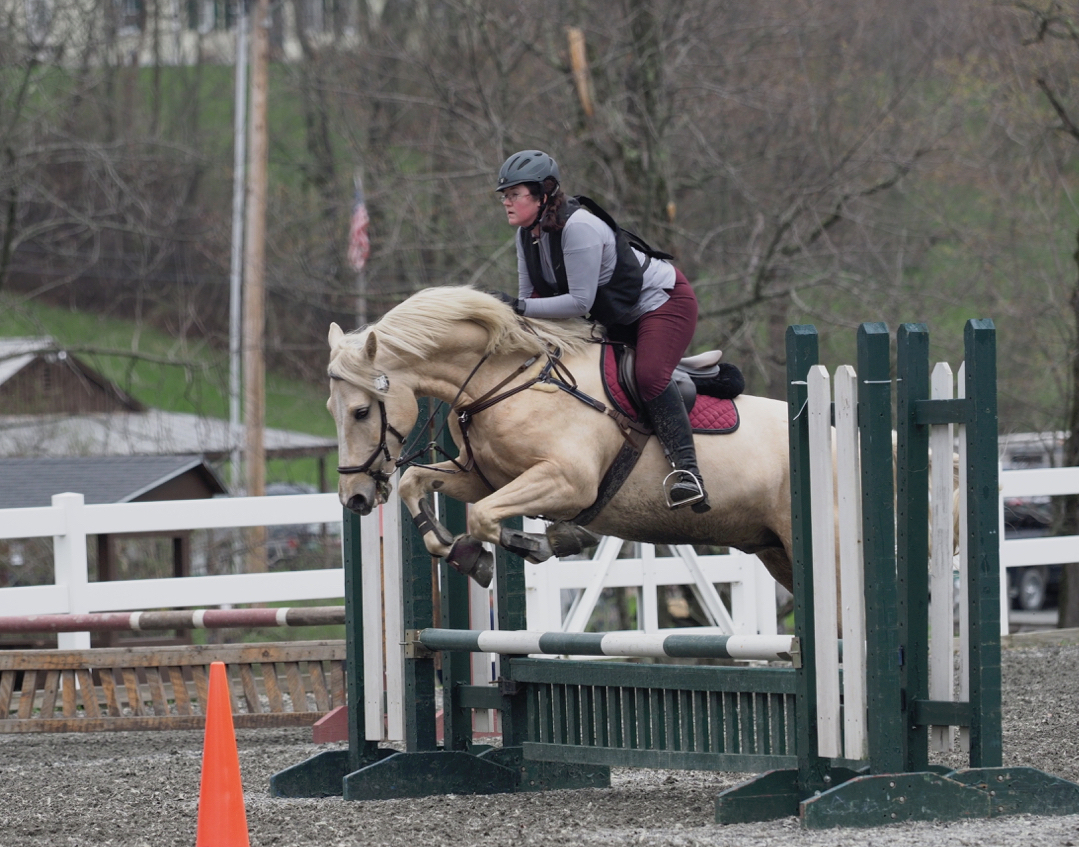 My husband started at 2′-2’3″ as a warm up round. Eugene bopped around that quite casually. Although he wasn’t impressed enough to pick up his feet, the jumps all stayed up. 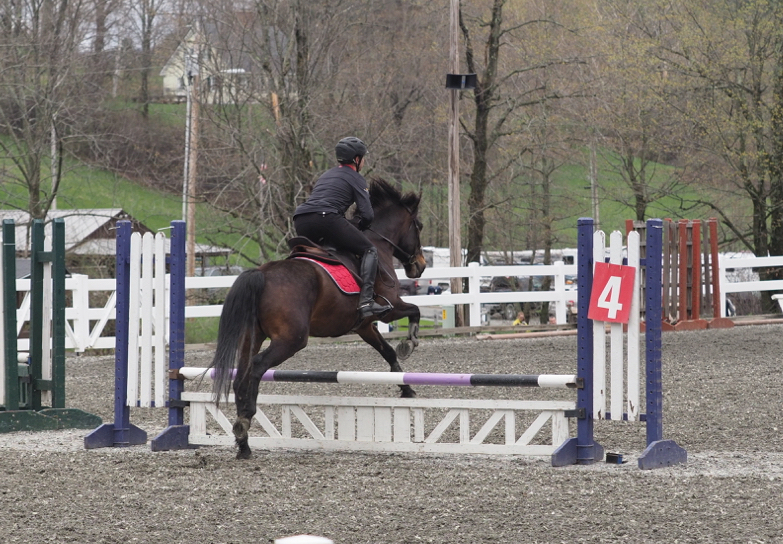 Their next round was 2’6″, which – as I mentioned before – was really about 2’3″. Eugene went and and just marched around that course like it was easy. Although he’d finally got to the point of being able to go clear at BN height last year, I didn’t think he’d come back from the whole winter off without missing a beat, but he did. 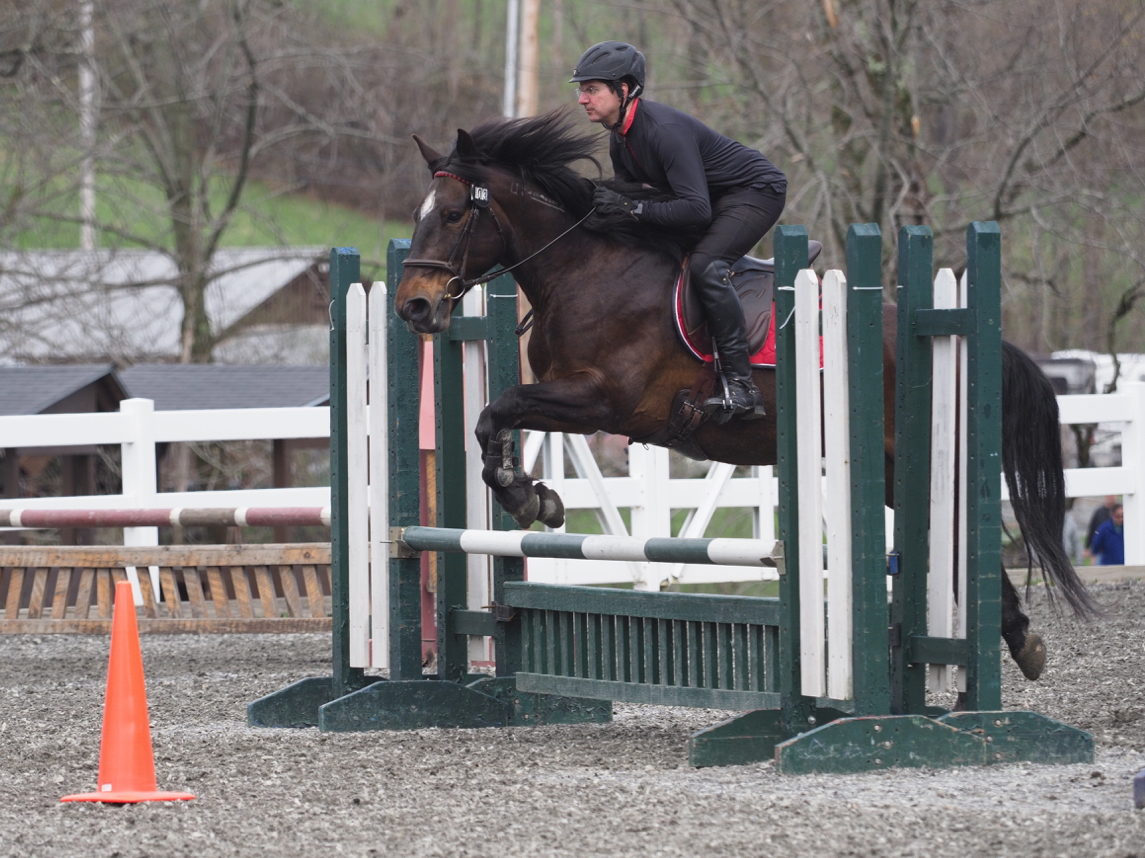 We had a long break before the 2’9″-3′ division and went back to the trailer. Since Levi was done, he got untacked, but then I had to walk him back to the arena when Eugene went back as I was concerned he would rip himself and/or the trailer apart if left alone. Levi was happy to go over and munch grass and receive lots of pettings and admiration for bystanders.

Eugene has always really struggled when a course is raised. It doesn’t seem to matter if he does warm up jumps at the new height or not. If he’s done the course before, when he goes in for the next round at a raised height, he bashes into the first jump. For whatever reason, GMHA decided the 2’9″-3′ division should be at actual height instead of soft and they raised those poles a lot. So when Eugene went to that first jump, this is what happened: 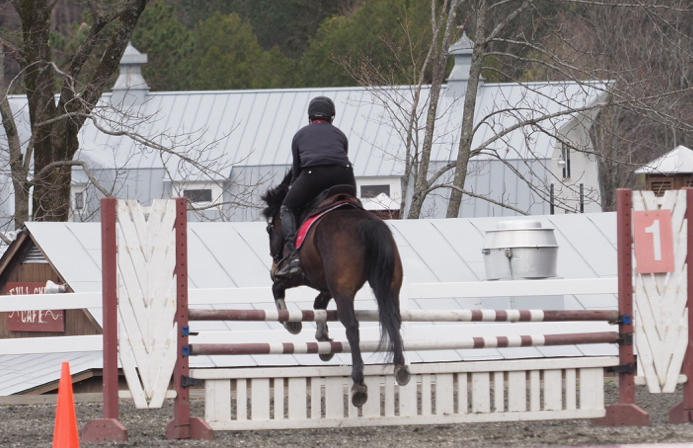 pole (on its way to being) down

But he rallied after that and went clear up until the two-stride combination at 7. Jump #7 had been solo up until this division and I think coming around the turn and seeing a whole ton of poles all of the sudden backed him off a bit. He knocked the first jump of the combination, but kept the second one up, which is pretty good for him as he usually takes out the second jump in a combination. But only 2 poles down in a course at 2’9″ is as good as Eugene was doing last year. Since he had only jumped once since October, I thought he might need more time to get back into it, but clearly the time off didn’t hurt him any.

Eugene returned to the show ring after having having all winter off like he hadn’t missed a day. #blmmustang #demandthebrand #saveahorserideamustang #jumper #eventer #eventersofinstagram #mustanghorse #horsesofinstagram #horseshow