We have a small cross country course on our property. When we first moved in there were 3 ditches in a row, one set up with posts and field cups so we could make an adjustable trakehner. It was just missing its log. 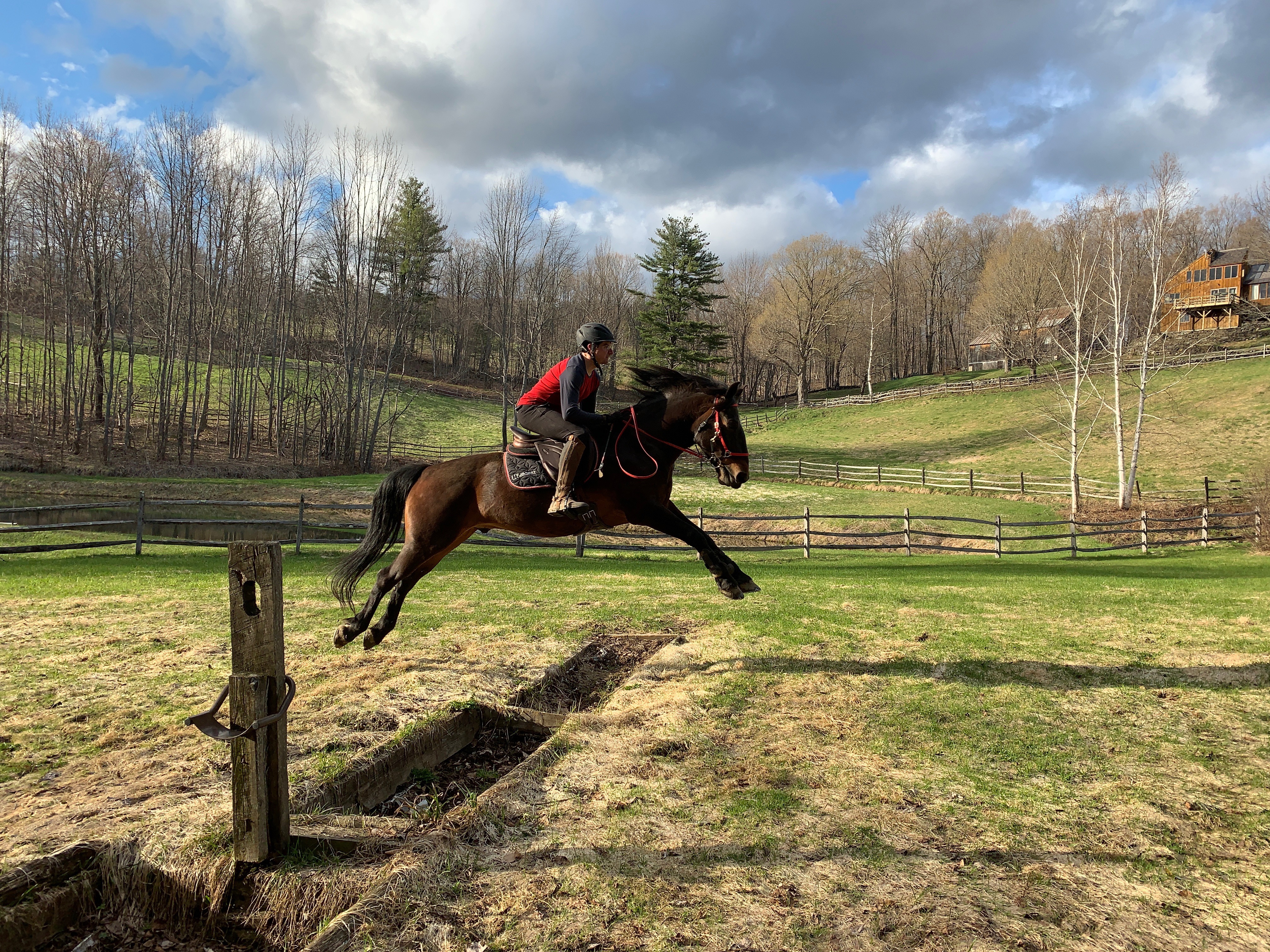 The 3 ditches – one set up for a trakehner

There was also a completely worn down log pile jump. I once tried to mount off of it and the whole thing was squishy. It’s more moss than wood at this point. 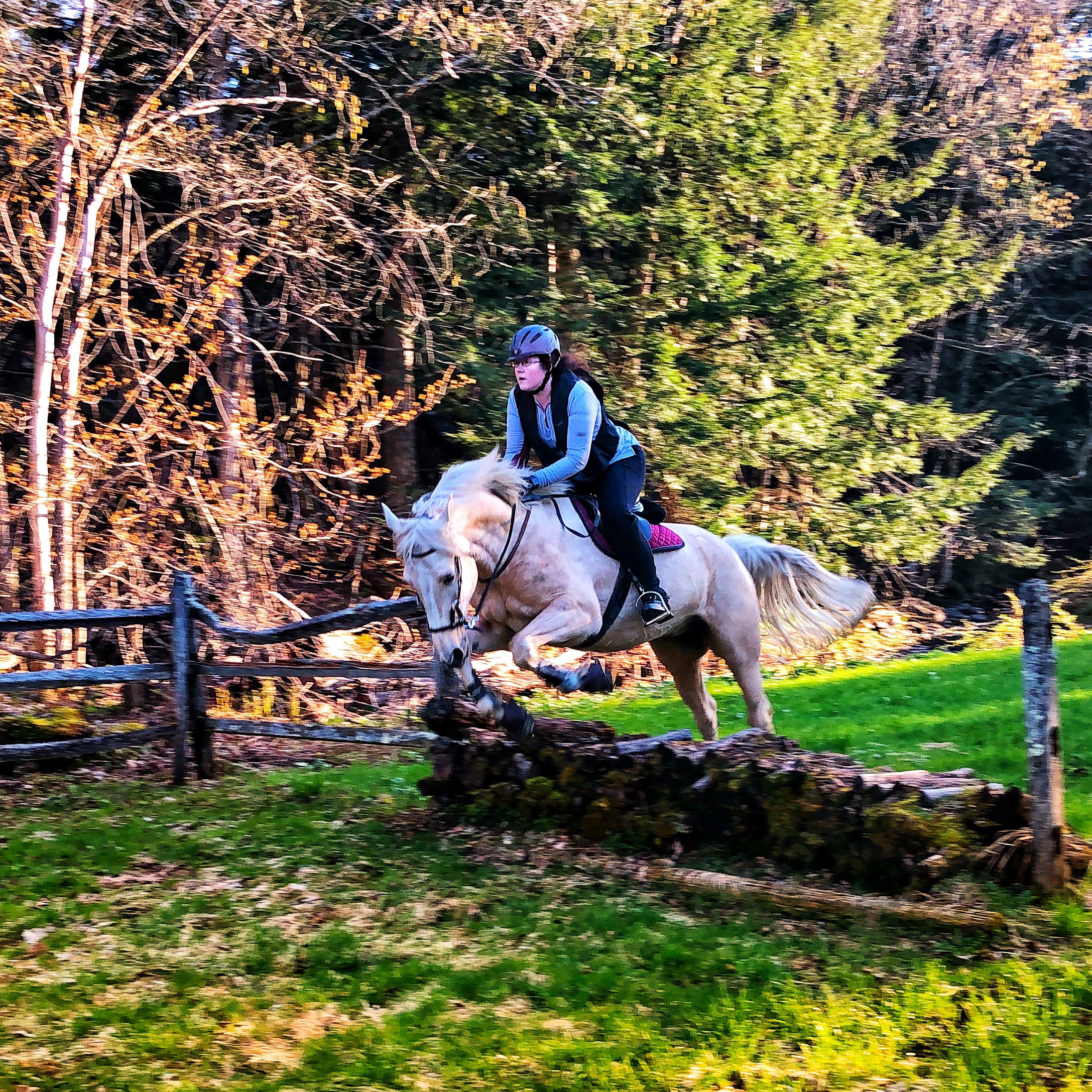 There’s also bank complex in the second field and there used to be a water obstacle, but it was washed out in Irene and never fixed. We’d like to eventually re-gravel and replug the drain. As part of the setup for the indoor going in, we had to remove a bunch of trees to make the path to the arena traversable by a semi. While I hate chopping down trees and was upset about it, we were both excited to put the trees to use. Most will become firewood, but some have become cross country jumps.

The first jump we fixed was the trakehner. Although the log might not look that big, I assure you it weighed a f*ck-ton. It was very difficult for the two of us to get into the ATV and then out again and onto the jump cups, but we did manage it. Eugene jumped it really well for being a very ditchy horse. It probably helps that the ditches are currently growing weeds. They need to be dug out and re-graveled next. 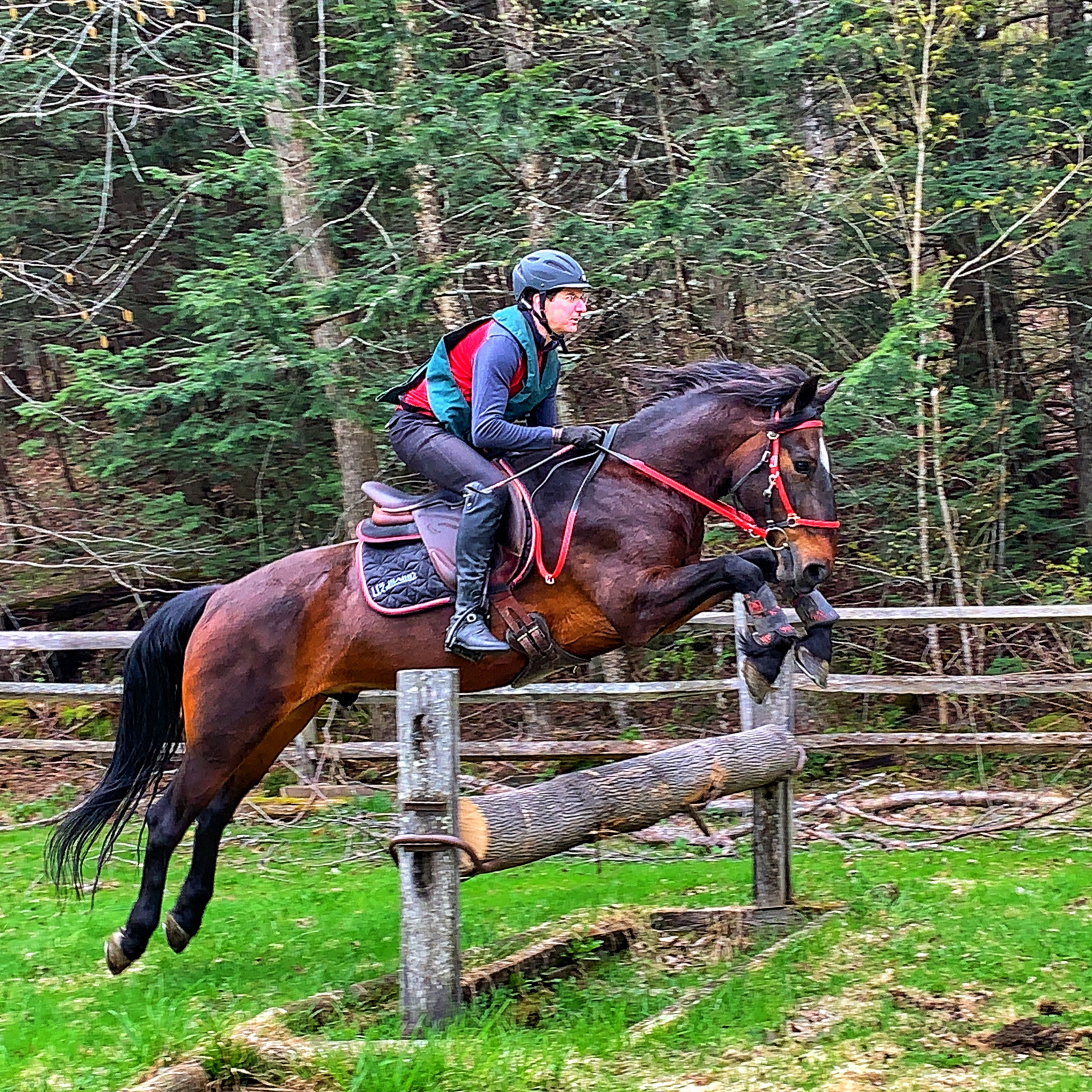 Our next fix was the log pile jump. My first thought was to just cut more small logs and add them in the same wood pile stack they were in, but my husband – who has read more about designing cross country jumps than I have, said that’s an old-school style of jump and is somewhat dangerous in that the edge of the wood can splinter into the horse’s leg if they hit it. It’s safer to do log piles in the other direction. So we did. 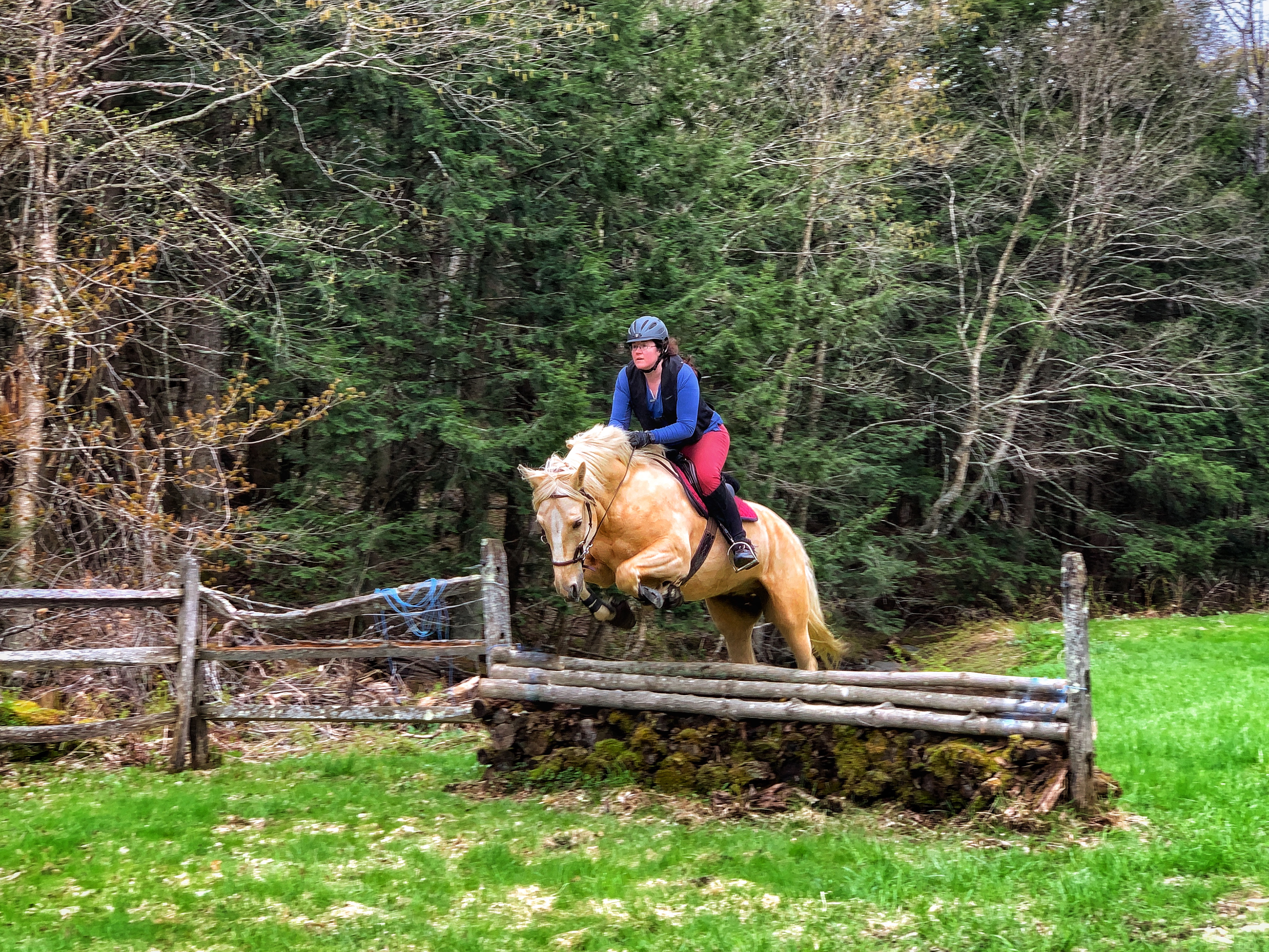 We’ll eventually need to take out all the old logs and replace them, but this is a good temporary fix.

Finally, we added some new jumps. One of the trees we took out was massive. I was particularly sad to see this one go, but it was on the turn and there was no way the trucks could get into the arena with it there.  We had the two largest pieces cut and placed* in the cross country field. * It’s been so FREAKING rainy this spring, we couldn’t have the excavator drive onto the field, so he dropped the logs down the grass bank you can see to the right of the picture below. The right hand log landed where it lies. It dried out one day and my husband was able to get down there with our tractor to roll the other log into place. It has since rained more and we can’t get down there again. 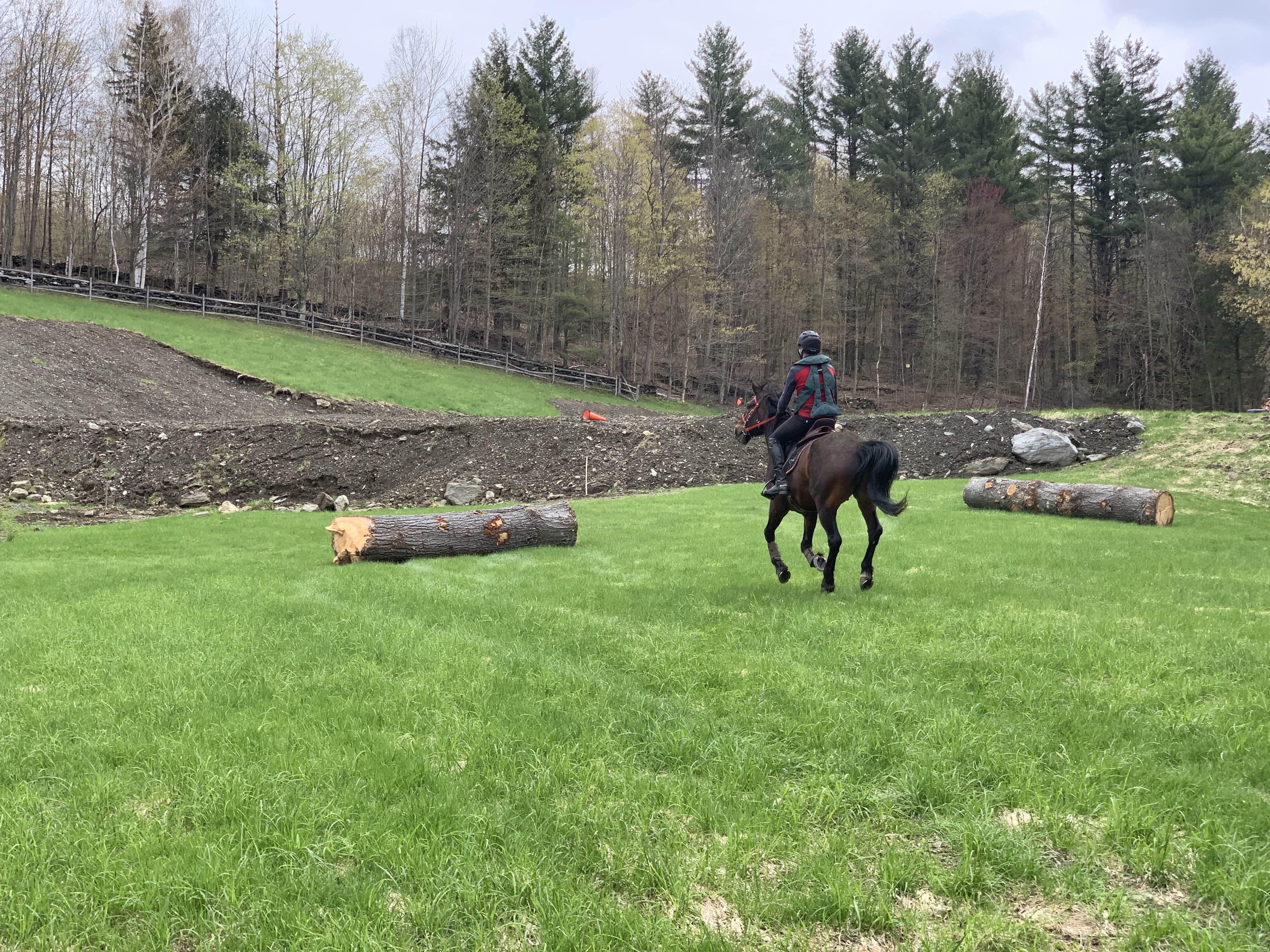 We’d like to make a few more jumps in the future. I’d particularly like to make some combination jumps (I’ve seen one that look like a rolltop from one side and a bench from the other) to maximize on our small space. What other jumps should we add?

It just will not stop raining here. I know a lot of the country is getting inordinate amounts of rain too, but being in good company isn’t making me any happier about it. We haven’t been able to mow anything because our ground is so wet, the tractor would tear the ground up. We’ve been contemplating buying a riding lawnmower and trying to mow the pastures with that. It would only take a few years to mow ~20 acres of grass with a riding mower so maybe we’ll do that.

As if the rain weren’t bad enough, it snowed 2 weeks ago. It was all melted away within a few hours of sunrise, but I was not happy to see that crap again.

We have about 2 miles of trails on our own property. We can also connect in to miles and miles of trails as well. With all the rain, the trails have been a bit muddy and we’ve been doing most of our longer trail rides on the dirt roads around us to preserve the trail footing. We tried to go out on our trails one time and couldn’t get around a large, downed tree. We just detoured to the neighbor’s trails (which have a ton of downed trees as well, but we could get around all of them) for that day and came back to chainsaw that sucker down another day. The next time we went out, we hit more downed trees, but were able to get around them. At one point we were going around a downed tree and Levi managed to get a small sapling underneath him and lost his damned mind. I don’t even blame him. I’d probably go nuts if a tree were jabbing me in the crotch. I did manage to get him to stop after he ineffectually hurled himself around for a while and then I hopped off and walked him off the sapling. But it was time to fix the damned trails. 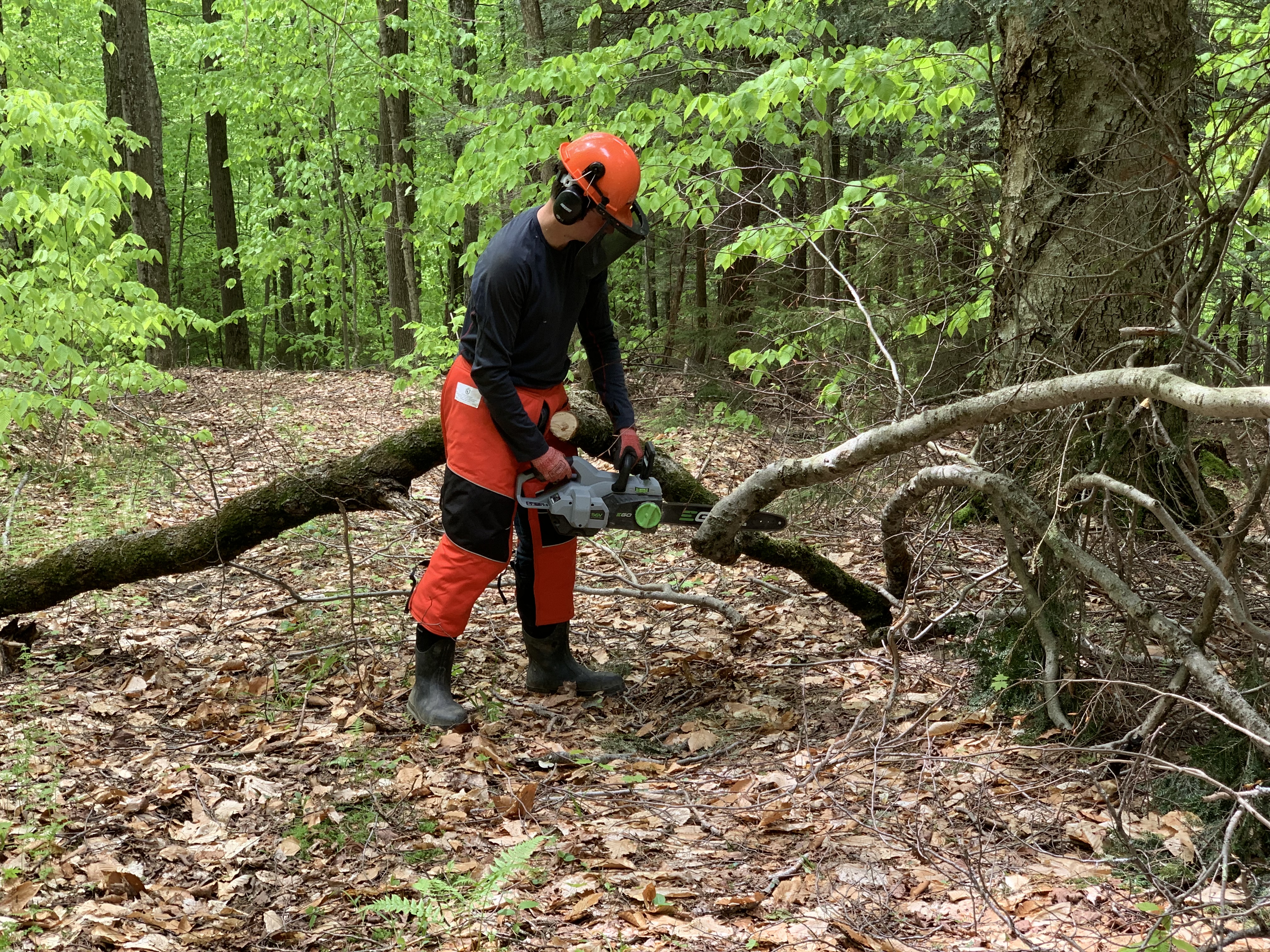 Last weekend we got out there with pruners and a chainsaw and cleaned up the major blockages. We still need to clear some smaller branches and re-grade a few sections that have been chopped up by the spring melt water, but we can ride the loops again.

Not horse related, but I spent this week doing a 4 day bread baking class at King Arthur Flour. I’ve alway been pretty good at baking pastries, but breads scare me. They’re a totally different beast. The class was super helpful and I learned a ton. I also came home with like 3+ different bread products every day. Today I cam home with 5 loaves of french bread and scones. Previous days have included rolls, loaves, sticky buns, braided jam breads, and much more. 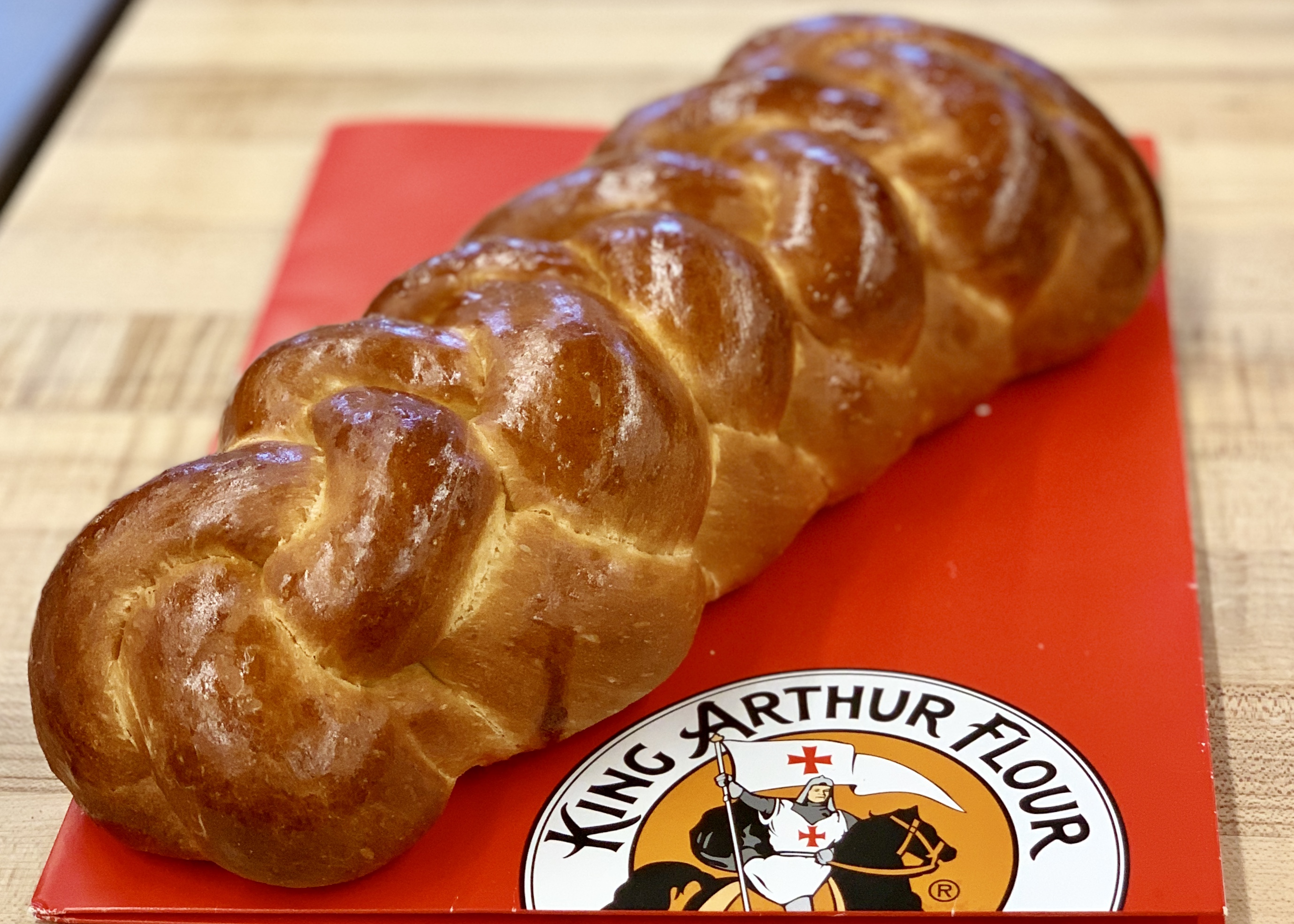 We finally got chicks. I’m getting a bit of a late start on chick season because I wanted the little bantam breeds that weren’t available until May. I’ve got Silkies, Polish, Salmon Faverolles, and Turkens. I got way more chicks than I need chickens because the cuter the breed, the less they come sexed so I may have some boys and those will NOT be staying. I also expect some loss. I lost 2 chicks in the first 24 hours – which is pretty normal with mailed chicks because that’s so stressful – but the rest are trucking along. Although I plan on getting an electric poultry fence, I imagine I’ll still loose some to predators once they go outside since we have every predator here: coyotes, foxes, fishers, racoons, hawks, owls, bears. You name it, we’ve got it. 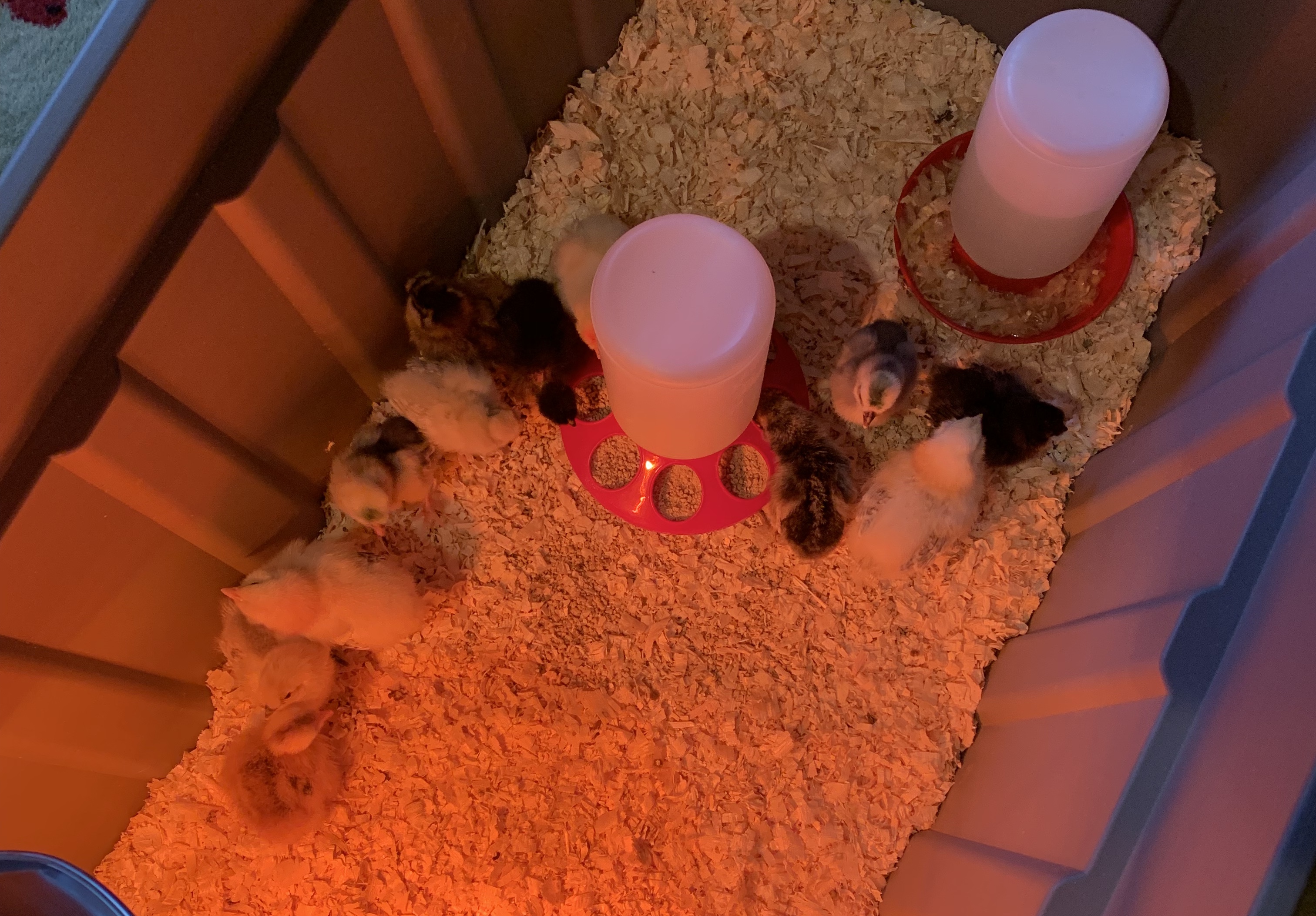 This is an old picture. They’re already much bigger. I’m really looking forward to them getting old enough to go outside.