When Jen from CobJockey said she was coming to the Bay Area for work and wanted to meet up, I was like “hell yeah.” She was able to fly in a day early so we could get together on Sunday and that meant I could gather the rest of the Bay Area bloggers for an epic meet up.

One of the things we love to do with visitors is go for a trail ride to the winery near our barn. I borrowed all of the non retired horses from my barn and Kate trailered in two ponies so that we could have enough. I spent most of Saturday making way too much food and on Sunday we drove a car over to the winery with a cooler full of food for a picnic and then another car over to the barn to wait for everyone to arrive.

People started trickling in and then we had the fun of trying to decide who would ride who. Megan had already claimed Kate’s pony Ginger (who is adorable so I can see why). I told Jen she had travelled the furthest so she got first pick and she chose Pixie who is a huge draft mix. She’s the most chill horse ever though, which is why Jen wanted her. That’s how the shortest person there totally ended up on the biggest horse. 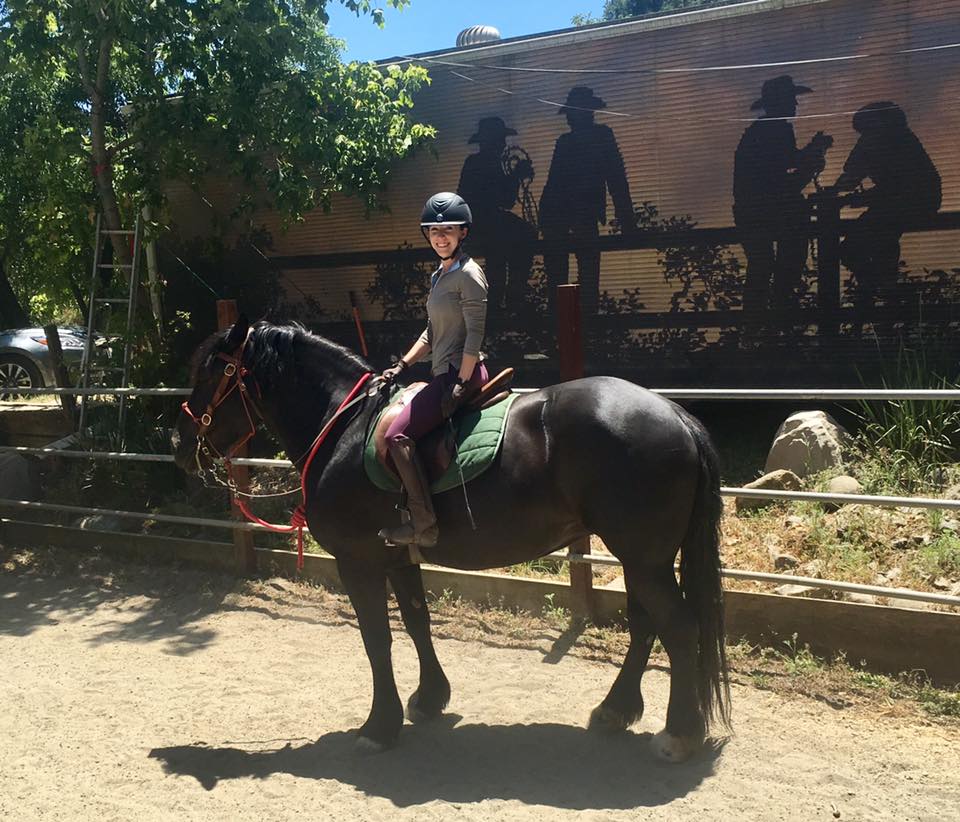 Next furthest was Nicole and she really wanted to ride the mule. The mule is the star of the show so I wasn’t surprised there either. I made Kate ride Levi because she’s used to riding young and stupid horses and I thought he was the most likely to do lose his mind. My husband got to ride Dijon because he was also a likely case for being an idiot.

Fig got to ride Eugene, which I thought was pretty fitting since they did a 50 mile endurance ride together back in October. Michelle rode Kate’s other adorable pony, Flounder, and I rode Chance. He’s another horse I borrowed from someone at my barn. I did not have permission to share him, which was shame because this horses is gaited and moves like a dream. He’s really fun to ride.

I was busy running all over the place trying to find tack and get everyone to sign papers so I missed a lot of the mounting up and picture time of everyone getting on their horses. We started in the small arena and rode up to the upper arena to make sure everyone was behaving. My plan had been to go out the other route, but the barn had a wood chipper there so we went back down the driveway and down the road to the park. 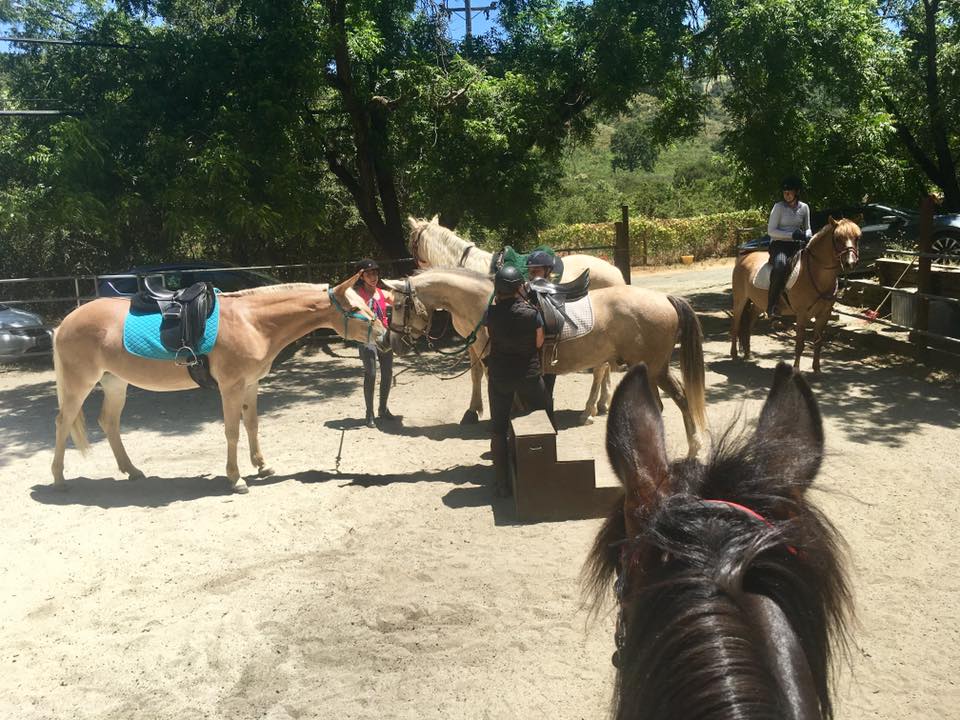 I was kind of worrying that something might go terribly wrong. Most of these horses are rock solid trail horses, but none of mine are used to being in a big group and who knows what any of them would think of it all. The horse I was borrowing had never even been on a trail ride (his owner just bought him a few weeks ago). My message to Kate before the day was “I hope this all is actually fun and not a giant clusterfuck of chaotic horses freaking out.” Thankfully, it was not. All the horses were on their best behavior. Well, Levi was being a bit of a butthead, but Kate dealt with him.

The ride to the winery is really short (like < 2 miles) and my husband and I have been riding this trail 1-2 times a week for like 5 years so I completely forgot that for anyone who isn’t used to it, that it might actually not seem all that easy. The first half of the trail is a narrow single track cut into the side of a near cliff so it’s steep up on one side and a drop-off on the other. But there are gorgeous views: 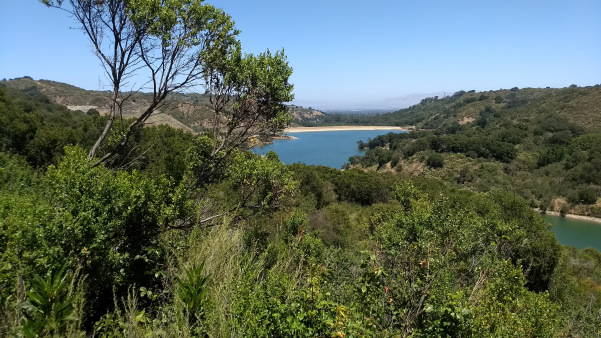 Once we arrived at the winery, we tied the ponies up and grabbed a table. Michelle, my husband, and I got the table set up and fended off children from trying to pet the horses (I feel like I need to make up a sign to bring with me that says “No Touchy”) while everyone else went into the winery for a tasting. 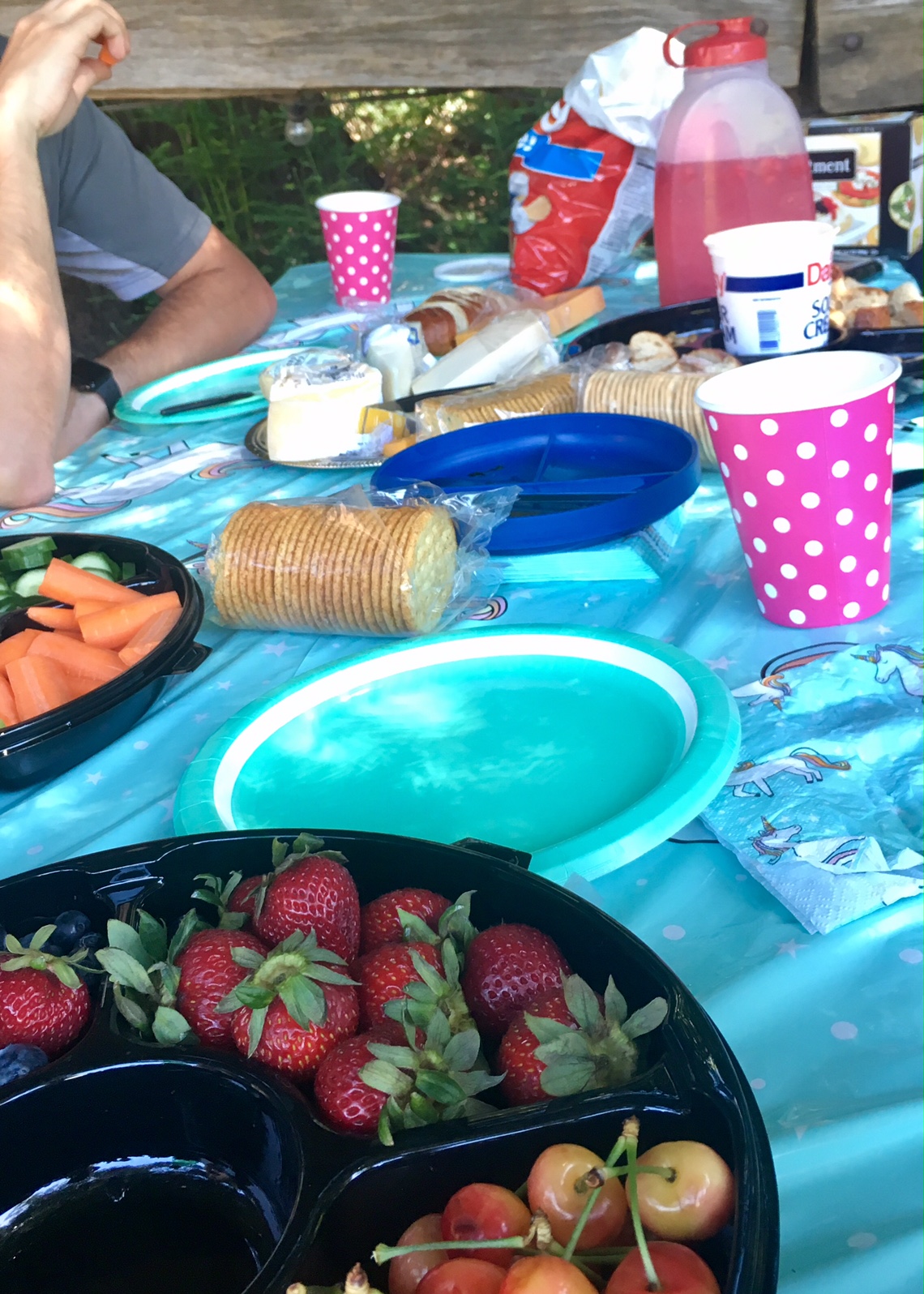 I feel like I did a terrible job of capturing just how much freaking food we had. There were like 10 types of cheese, crackers and bread, fruits, veggies and dip, chips and dip, sourdough with both chocolate and raspberry vinegars and blood orange olive oil and raspberry lemonade. I also failed to get a picture of the adorable unicorn napkins and tablecloth I brought, but you can kind of see them here.

After chatting and stuffing our faces, it was time to mount back up and hit the trails for home. The ride back was also free from any problems. Once we got back, we untacked most of the horses but kept Kate’s ponies and Nilla and Levi tacked up so that we could play with them. Everyone really wanted to try the mule.

And the mule was happy to accept their love (and ear scratches). People also had fun jumping Kate’s adorable Ginger pony and trying out Levi’s couch like gaits. 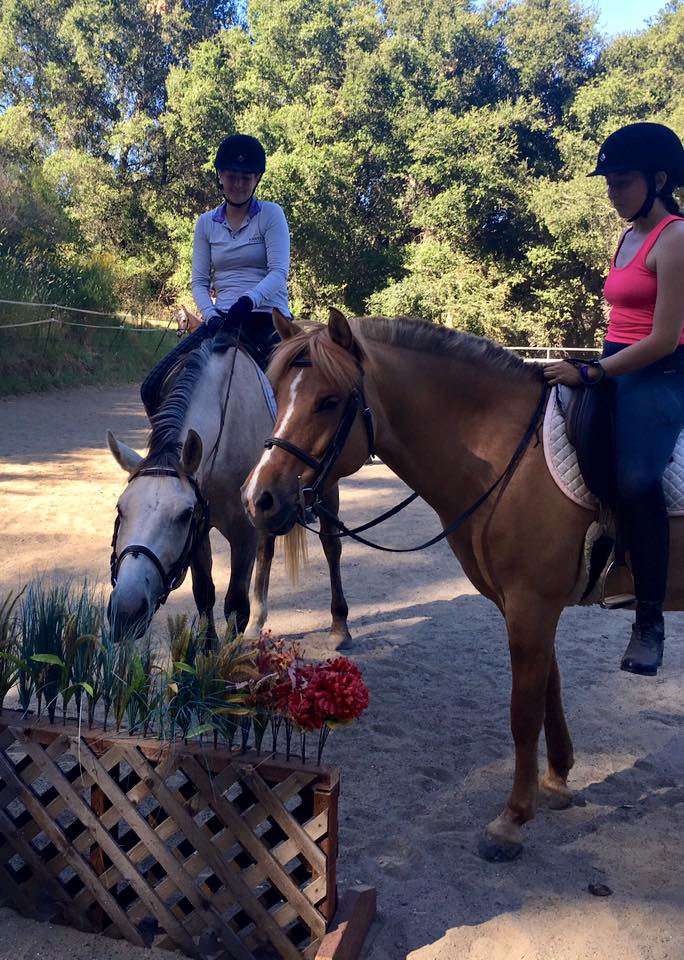 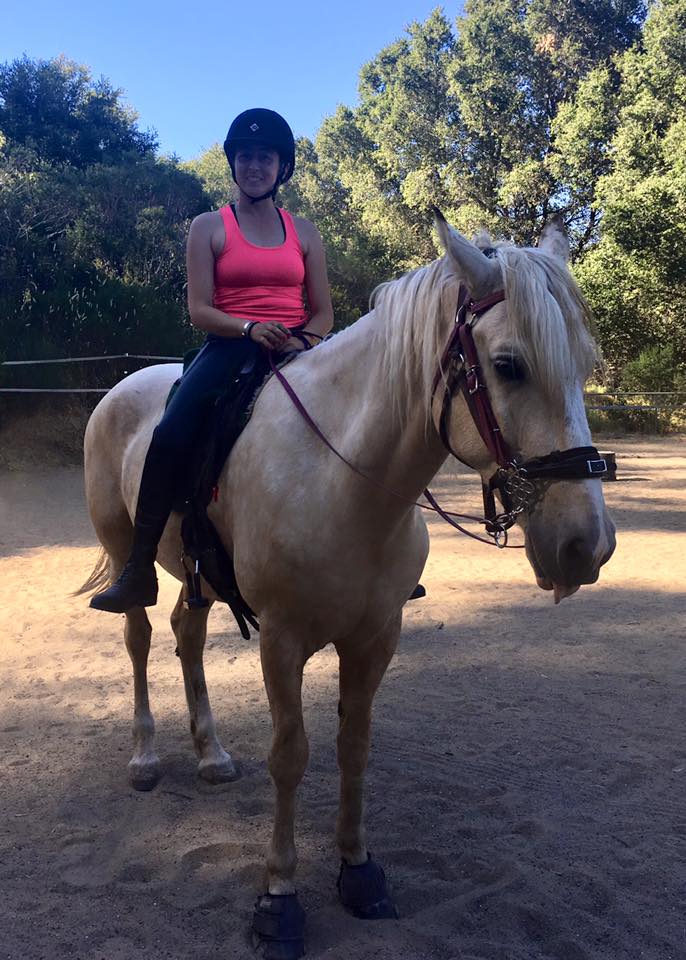 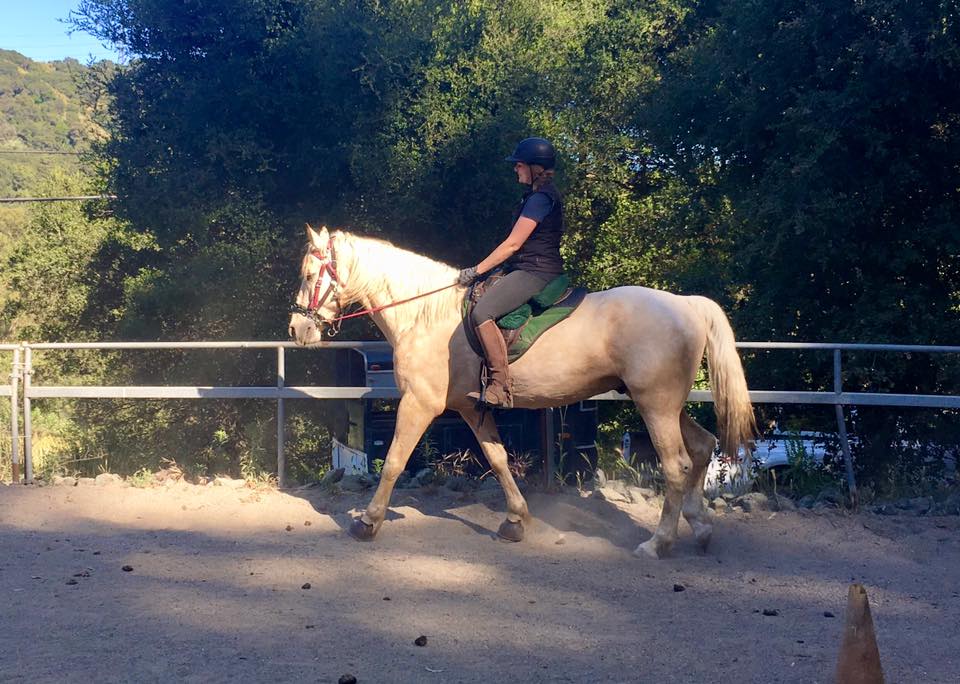 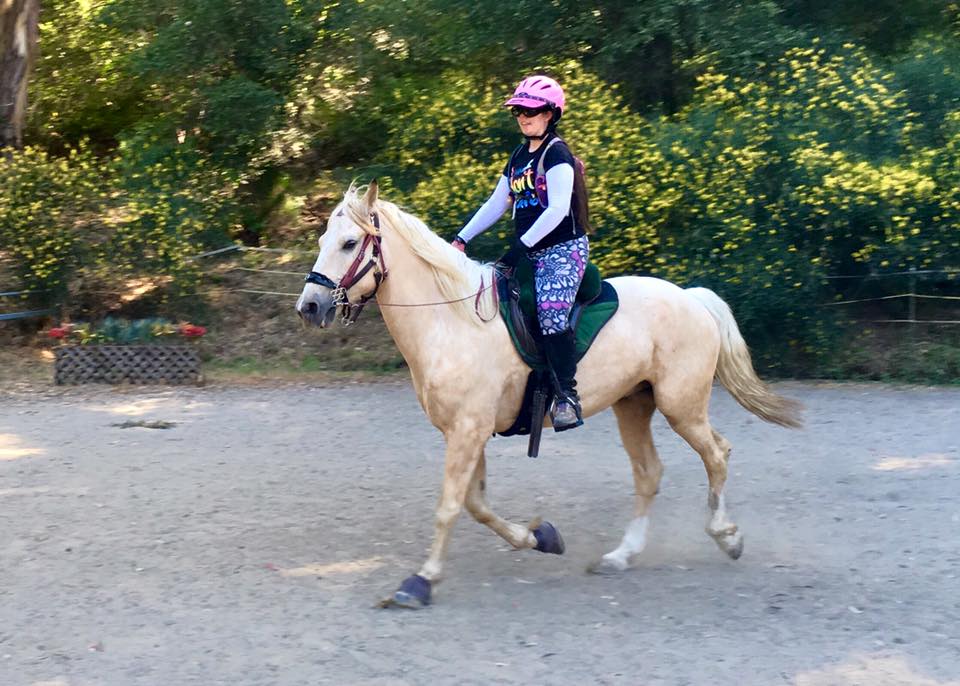 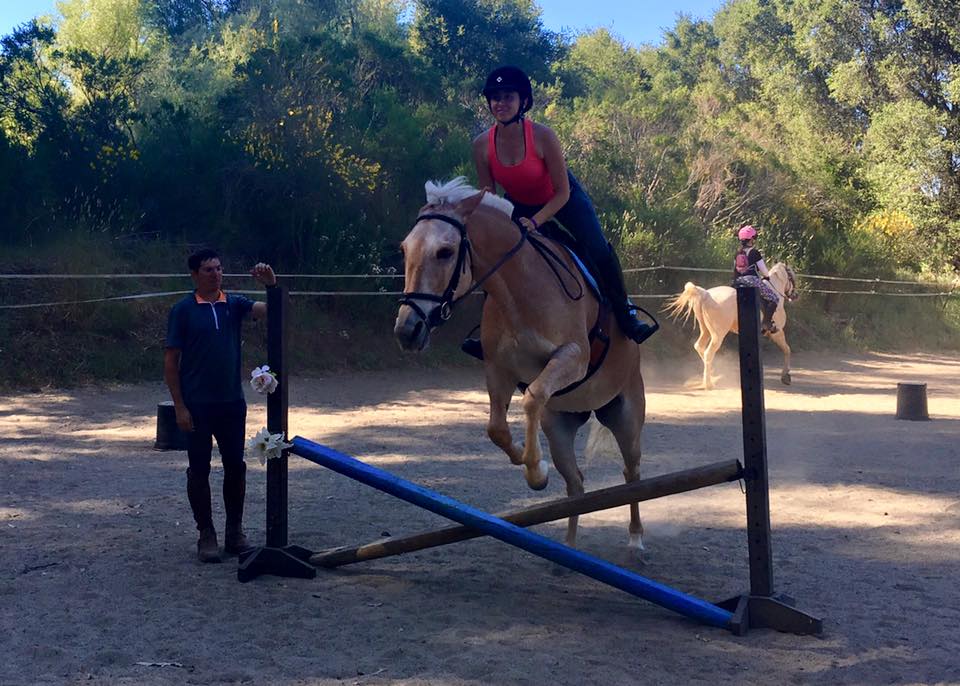 I think one of the best parts of this for me was watching everyone try to ride Nilla. While I can throw someone on her who has never ridden before and she’ll pack them around on a trail ride or even play walk-trot mule at a show, she is NOT easy to ride. Nicole started with her and I told her, you can package her up and she said “I don’t have the strength for that.” I know that feeling.

It was especially hilarious (to me) to watch Kate and Megan try to wrestle her into dressage mode. She just does not move like a horse and it can be very hard to try to organize your body and hers. Obviously they got her going, but there was a lot of giggling and comments of how difficult it is. I told Kate she had to jump her and Kate was all for it, but quickly found that Nilla makes nothing easy. 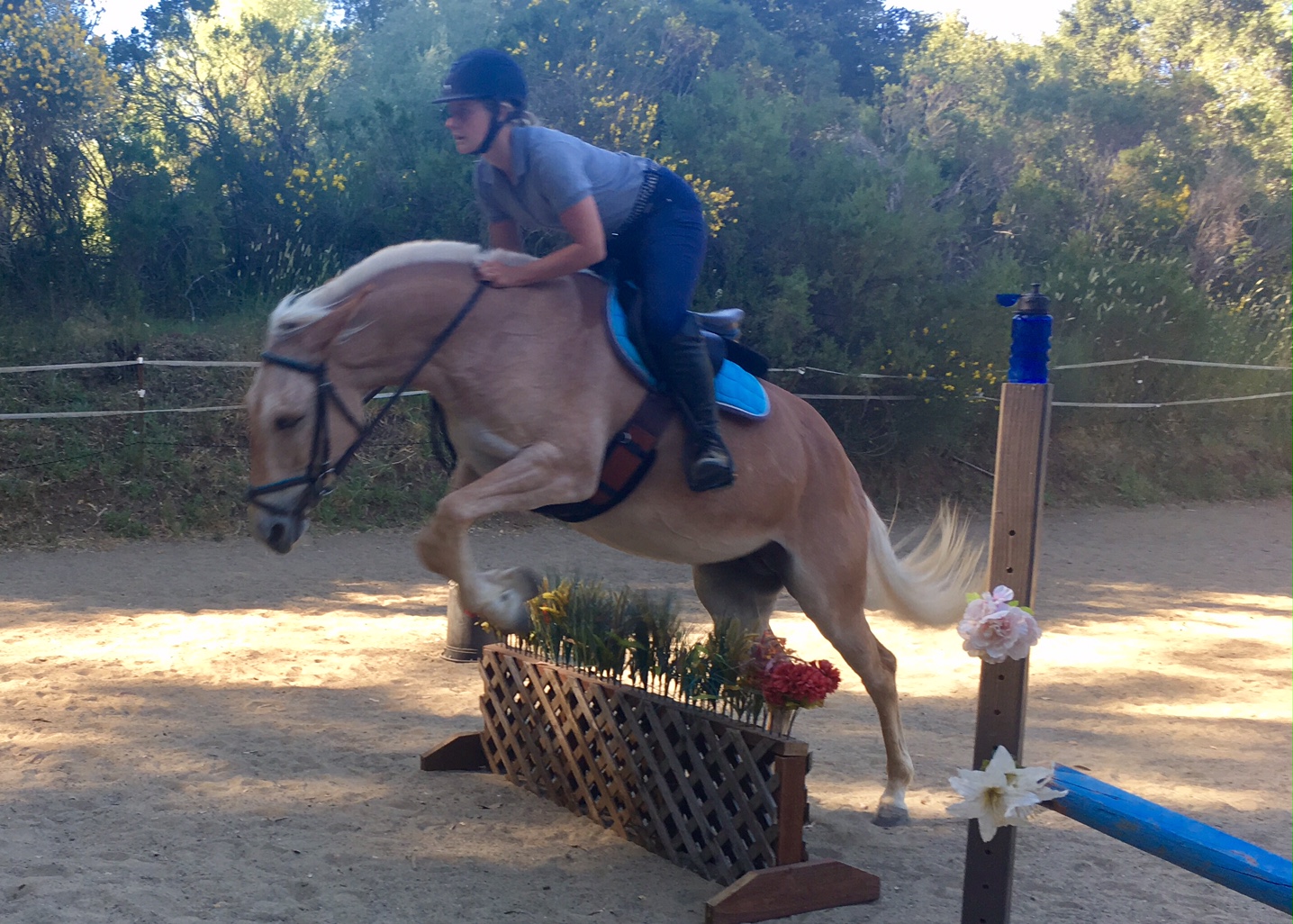 I promise you Kate is a great rider, this mule makes it hard.

I’ve told people before that riding Nilla makes you feel like you don’t know how to ride. Of course, everyone thinks I’m exaggerating, but I’m not. This isn’t to say she’s bad. She’s a very good mule with a lot of very good attributes, but she’s a different feeling ride. And I really love watching other people ride her and realize just what I’m dealing with.

But if you can ride her well:

Poor Jen was fresh off a flight, on East Coast time, and coasting on three hours of sleep, so she just hung out while everyone else was swapping ponies, but hopefully she’ll come back out and try a mule ride sometime. It was a really fantastic day and a lot of fun. I enjoyed getting to finally meet Jen and see everyone else again. It’s always fun to play ponies with other people who get it. If you’re ever visiting the bay area, message me. I’m always happy to let people ride the mule. 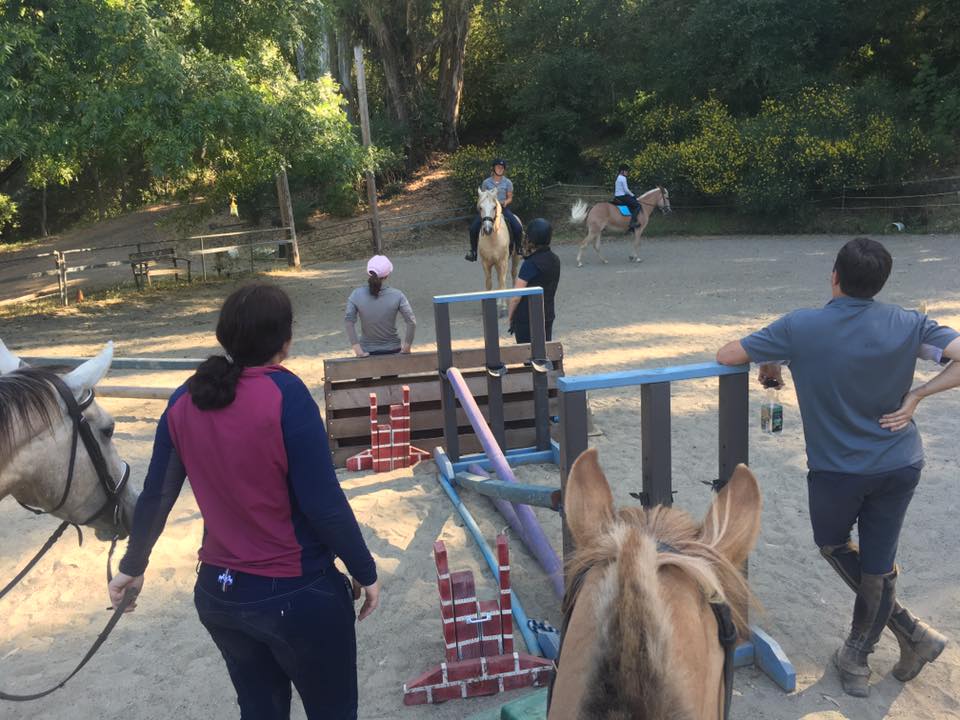