We finally get to the best part of eventing: cross country. My husband and I had walked the course on Thursday. Here’s a link to our coursewalk. The posted distance was 1680m and the coursewalk app said 1899m. Now, I know gps apps can be a bit off, but we’ve never had much issue with coursewalk and this was a pretty major difference. 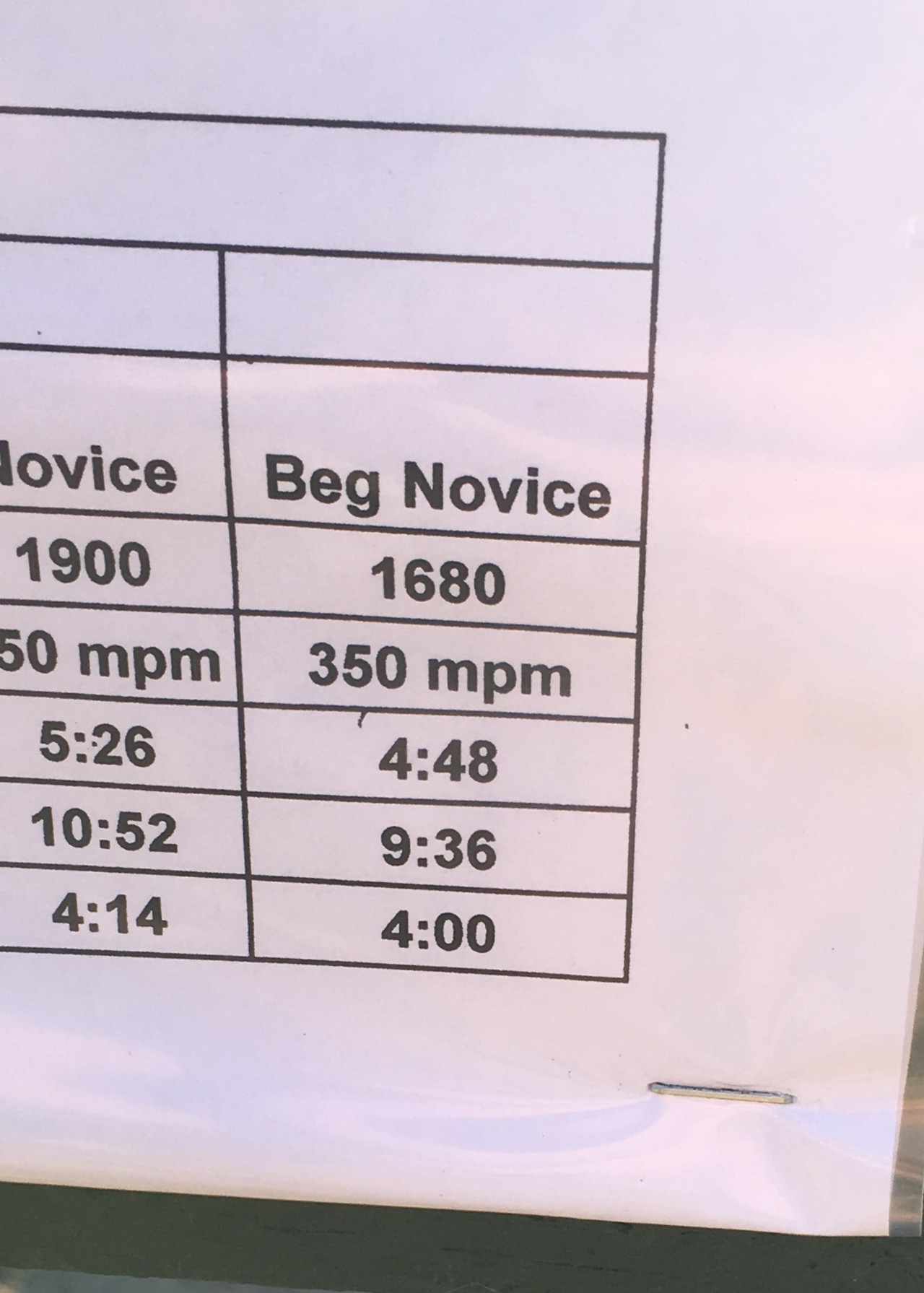 The course for BN and Novice also generally followed the same track and that posted distance was 1900m. 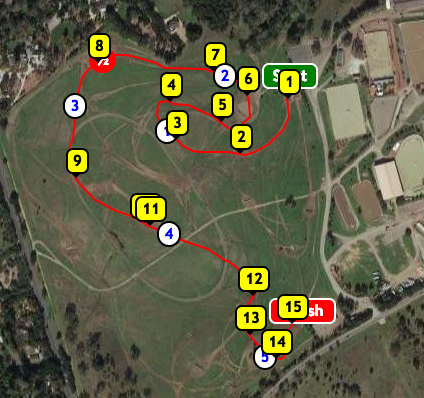 We figured we’d just set our timer for optimum time and go with it. When we walked the course again on Friday with Kate and her students, I mentioned that it seemed long and she asked if we had talked to the TD about that. Well, no. I wasn’t really comfortable doing that with an app as proof. On Saturday when I was jump judging I watched a bunch of people using wheels to walk the BN course so I thought maybe they’d address it, but no. Kate set out to try to borrow a wheel Sunday morning and we were going to walk it once again, then talk to the TD. As she was asking around for a wheel, she mentioned she thought the course was too long and a trainer went off to the office to complain. A few hours later, Kate sent me this image: 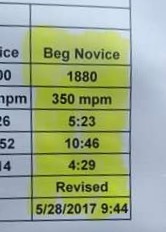 They revised it at 9:44 am and BN started at noon. I was actually trying to nap in the truck at 9:44 so it’s possible I missed it, but I never heard an announcement. Kate never heard an announcement. I talked to one per woman afterwards who hadn’t ever realized it had been changed and just ran the course thinking she was going for the original time. The time difference is actually pretty significant too: 35 seconds. It’s a 12% increase in distance and time.

I thought the course was an interested mix of easy and difficult questions. None of the water was flagged, although it would be difficult to make lines around it. There were no ditches or banks. The real challenges were 9, 10, and 11. 9 was a maxed out ramp/table jump set on a downward incline. It was definitely one where the horse wouldn’t be able to see the ground on the other side until pretty close up and you’d be heading downhill to it at that. The next challenge was 10 and 11. They were flagged separately so technically you could circle, but they were close. And because of a slight climb up to #10, you couldn’t see the second jump until you were jumping the first. They were also a weird distance apart: it walked at 3.5 strides. It was actually a perfect 4 strides if you don’t need any take-off or landing room. I had Kate stride it out too because I thought maybe my husband and I were both wrong, but no: it was just odd. Eugene takes tiny little strides though so we thought it might actually work to his advantage.

Around 12:45, we got Eugene all tacked up and headed to the warm up before his 1:31 start time. He was definitely feeling better: he practically took off the moment my husband got on and was really striding out during his walk that morning. Warm up went really well. They warmed up, popped over the jumps and then spent some time chilling by the fence watching people run XC. Eugene was perfect. He didn’t even get upset when another horse had a complete freak out. He’s such a chill horse.

I went out to get a good spot for pictures and left them to hang out for a bit. For some reason, they weren’t following the posted time and I started getting concerned when I saw someone who was supposed to be after my husband go before him, but eventually they made their way over to the start box. Where Eugene proceeded to snooze like a good boy while my husband failed to get the watch app working because his gloves aren’t touchscreen friendly. 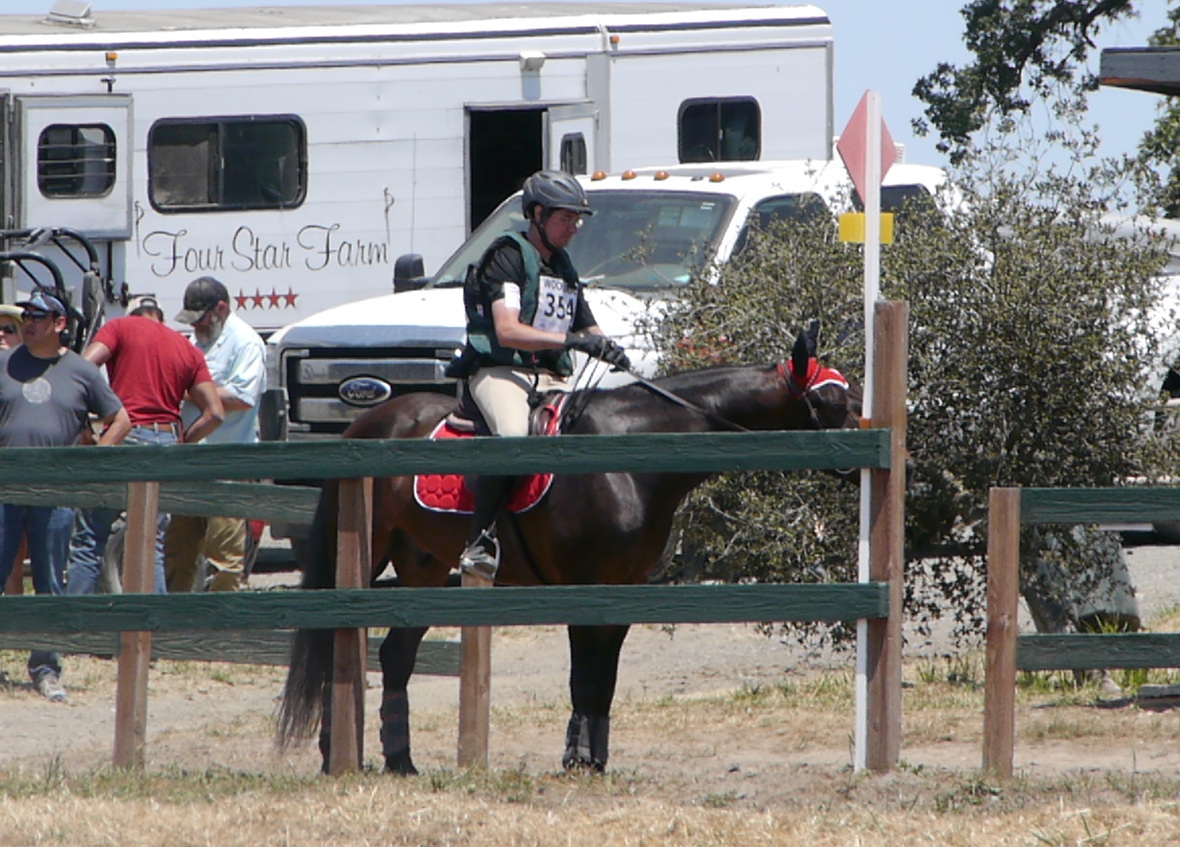 And then it was go time.

At 35: “Yeah there’s people over there.” Poor Eugene is scared of jump judges.
At 2:10: Cursing his lack of watch.
At 3:00: Why did the jump judge think hiding behind the novice jump at 9 would be a good place?
At 4:20: My husband forgets his course, and then has to turn through the grass to go back to his actual jump.
At 4:50: My husband saying “probably fast” because he has no watch so he’s guessing. They ended at 5:01 so they weren’t fast.

I managed to get a few pictures although I’ve mentioned before that I am terrible at this. I was trying to get shots of a bunch of jumps, but I should have just concentrated on lining up one good shot instead. 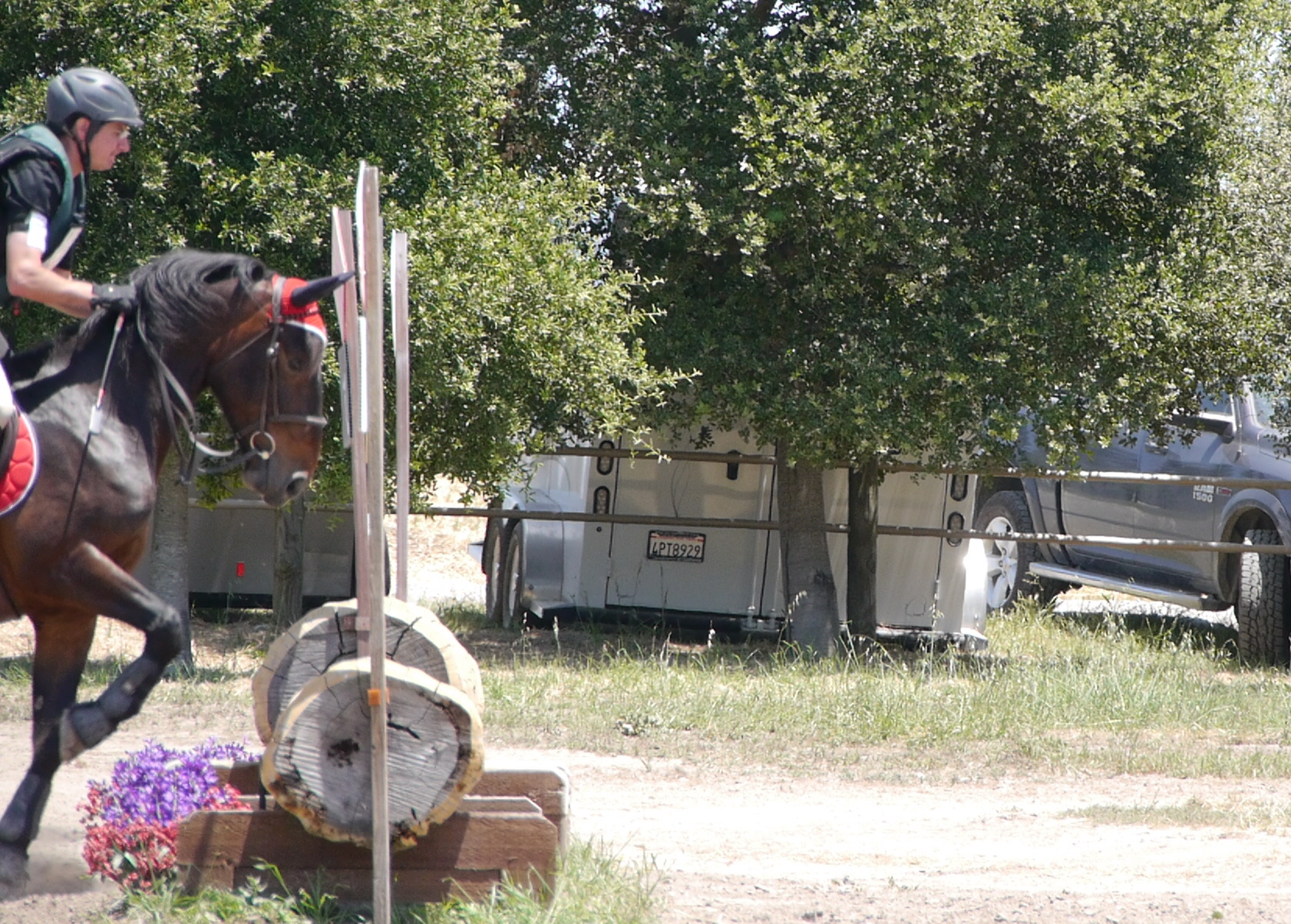 I have some camera alignment issues, but at least I’m not looking down at the jump like those 2 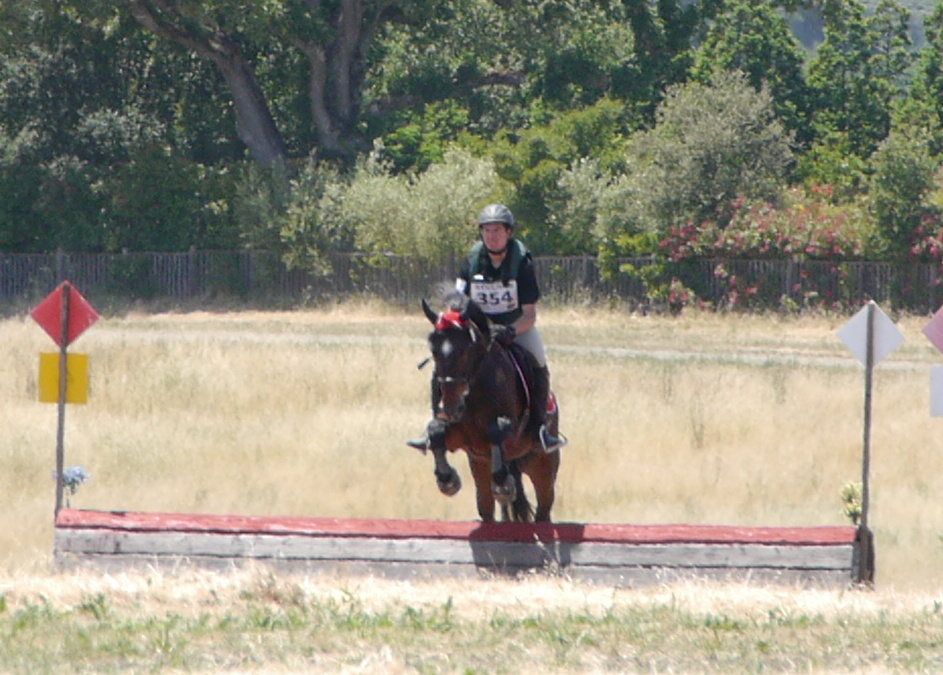 I love how you can see his brand here. Little Mustang was double clear on XC at his first rated event. #demandthebrand #blmmustang #saveahorserideamustang #eventing #eventingmustang 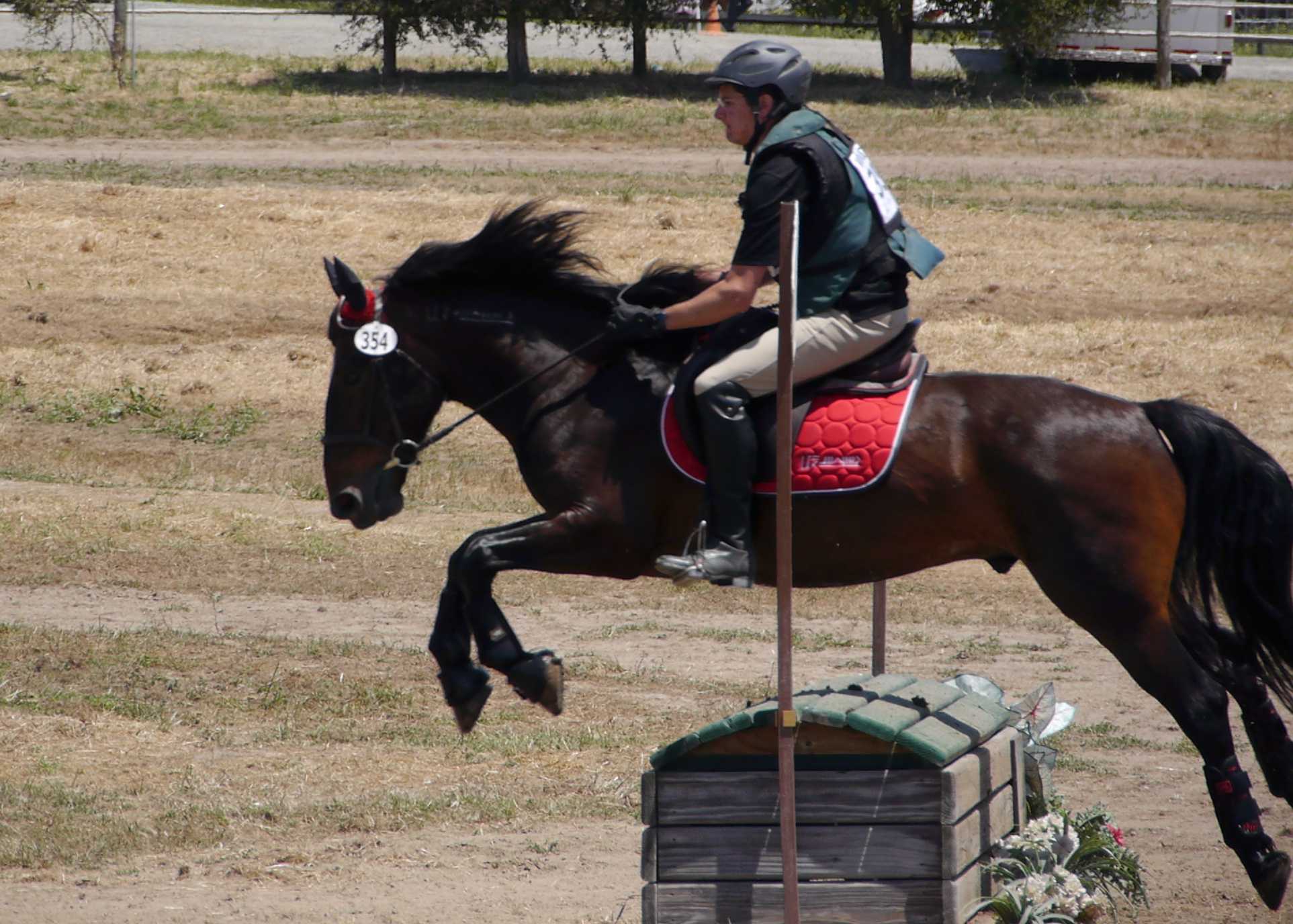 I just cannot point the camera in the right place… 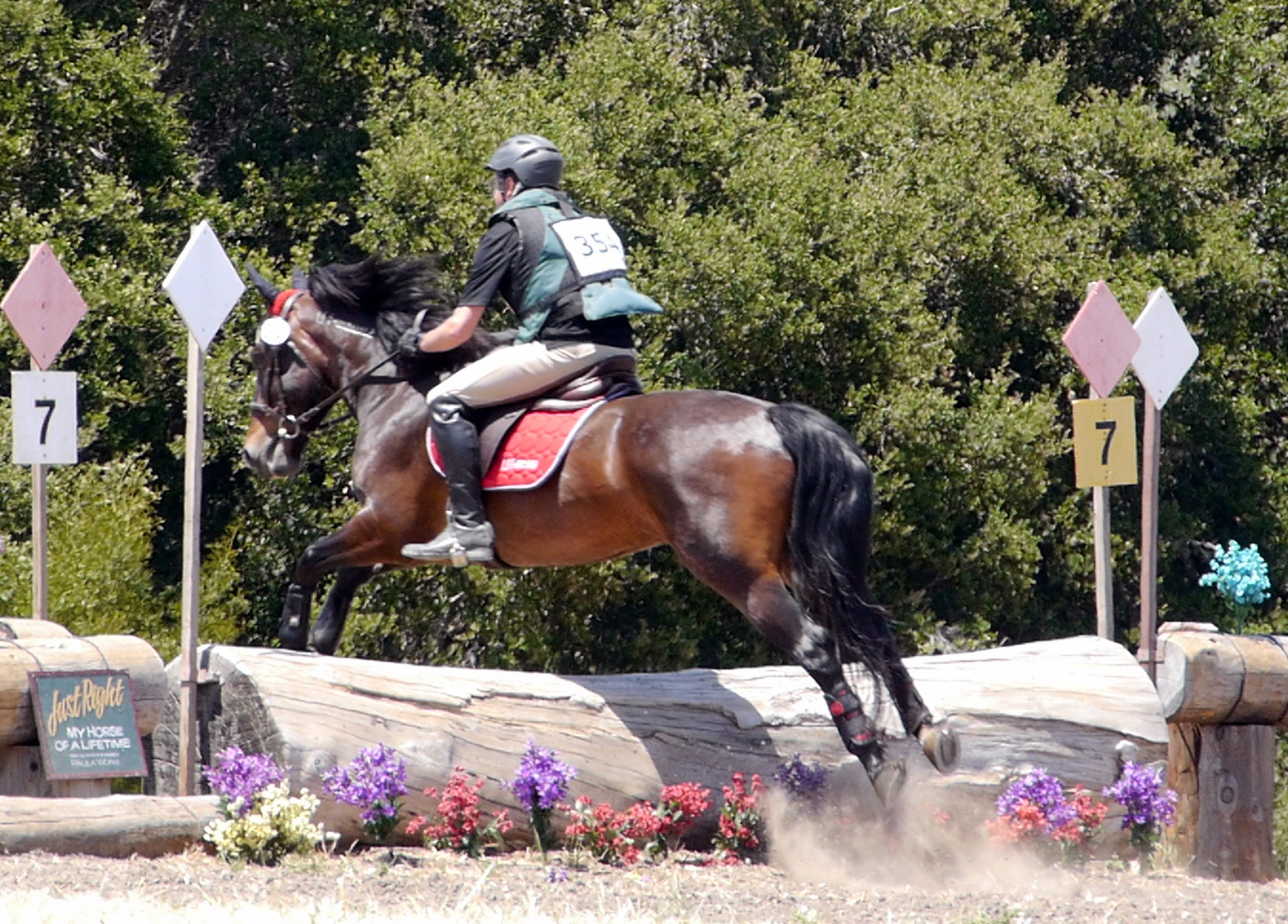 …or hit the shutter at the right moment 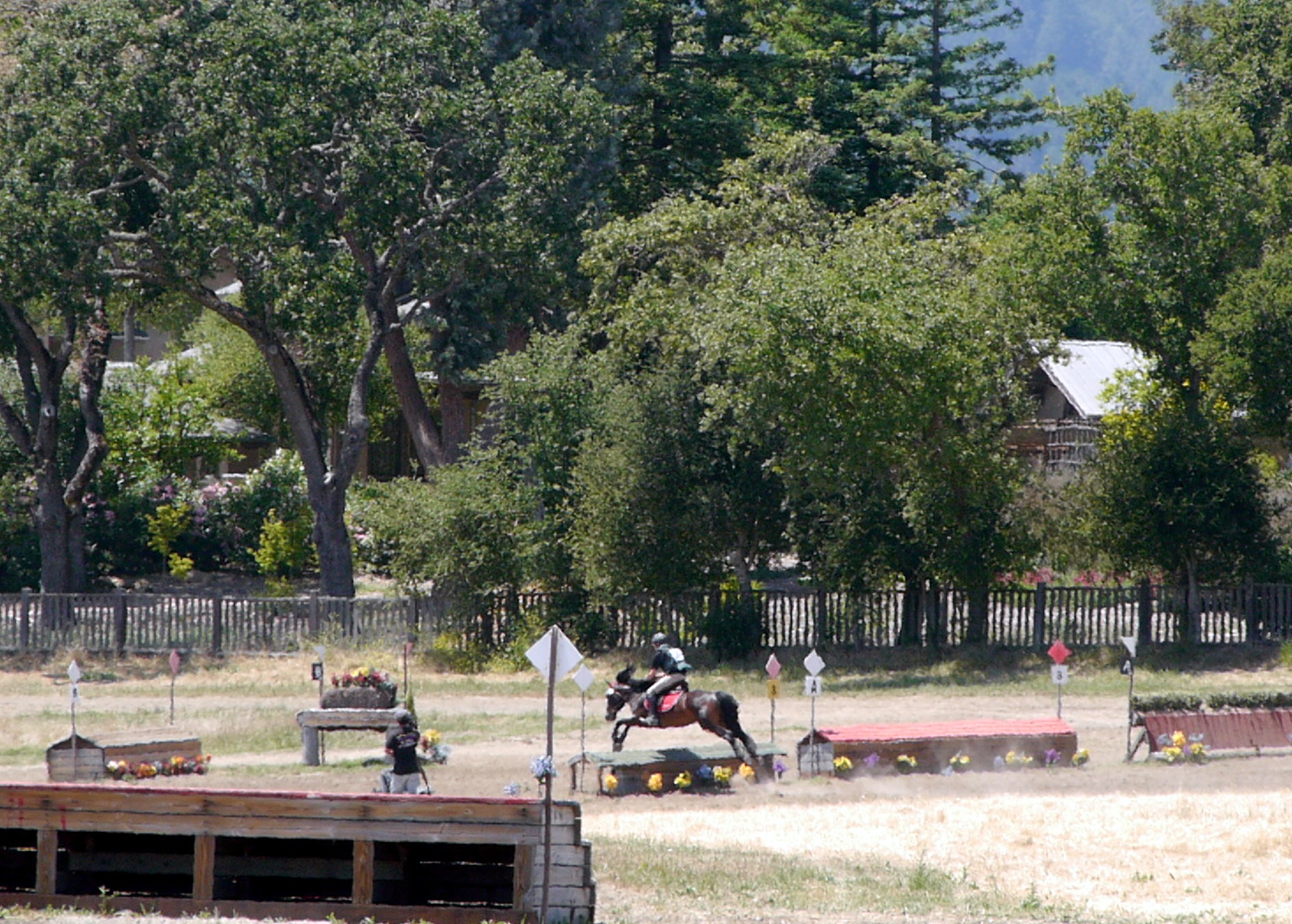 This shot is really far away, but look how much fun Eugene is having

Because of hills, I couldn’t see him doing jumps 9-12, but I did catch this moment where they are going past the turn to #13: 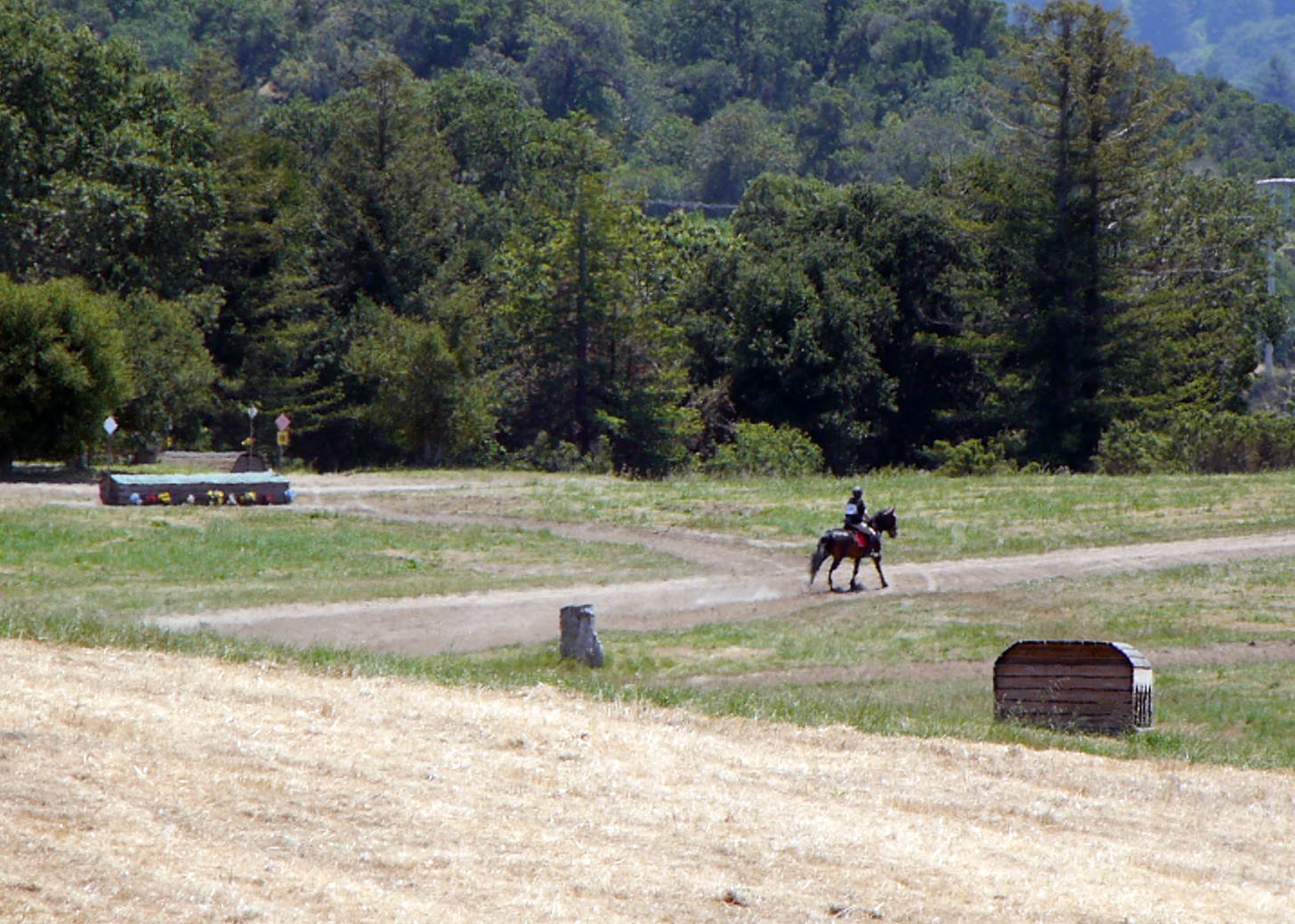 And then they fixed it: 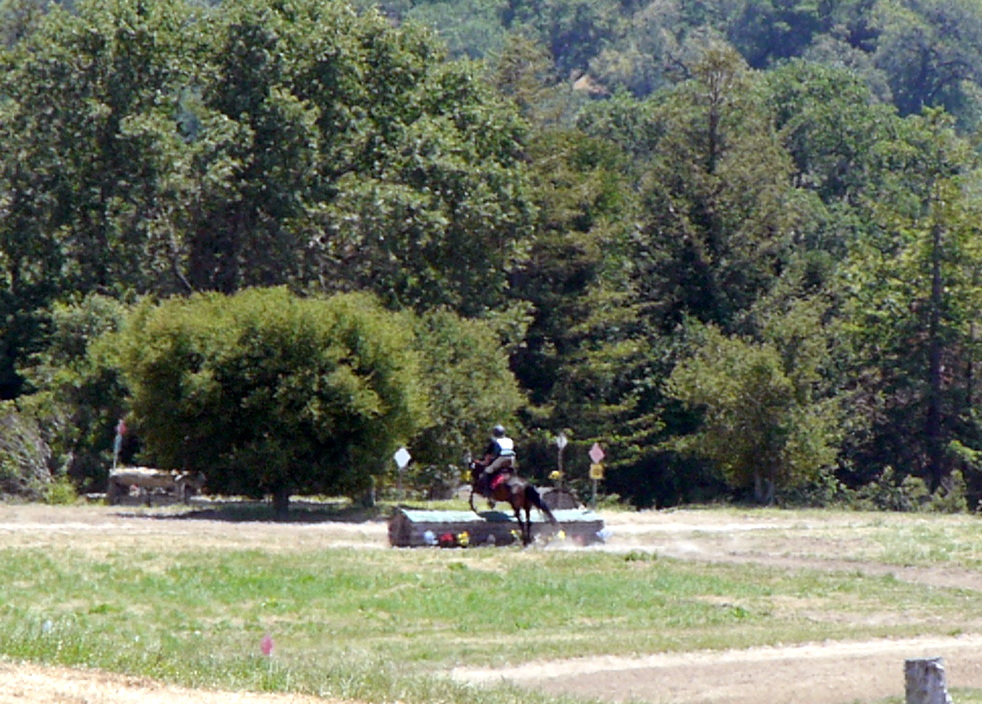 Eugene might never be good at dressage, but he is all about cross country. They were double clear and moved up from 15th to 13th. My husband’s primary goal for the event was to end with a # and not a letter and his stretch goal was not to be last. It might not be as cool as winning, but they achieved both their goals at their first rated event.

18 thoughts on “The Spring Event At Woodside – Cross Country”