We’ve been trying to get Eugene jumping, but he really struggles with the concept. He’ll go forward over anything, but tries to just trot over it and knocks high poles down. 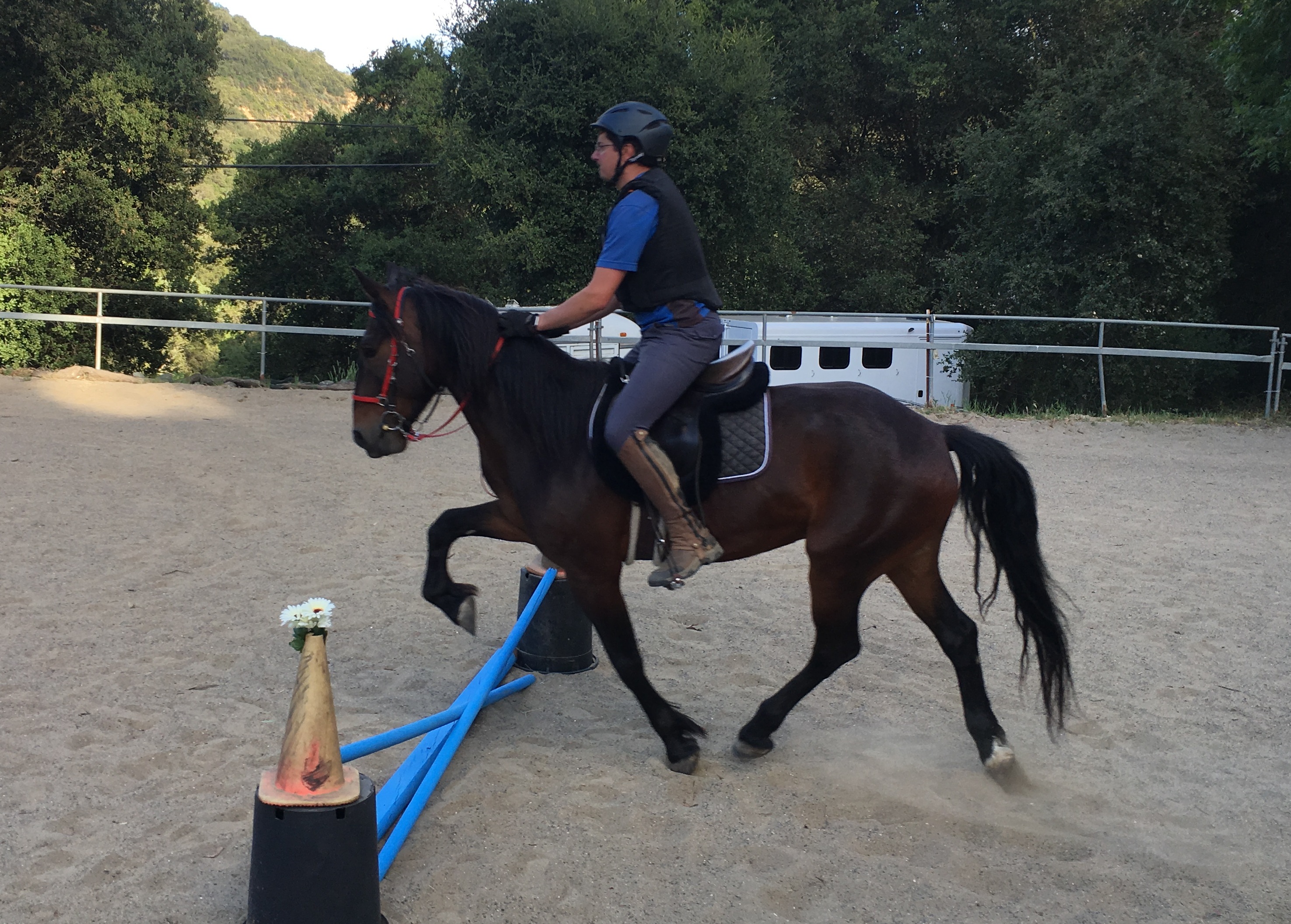 He’s trying very hard and being a good boy, but it’s more like he just doesn’t understand the idea of lifting up and jumping the obstacle. So we brought one set of standards and poles down to the lower arena to let him go over them freestyle without a rider interfering.

This was rather a mixed success. Most of the time, he just trotted over the jumps: 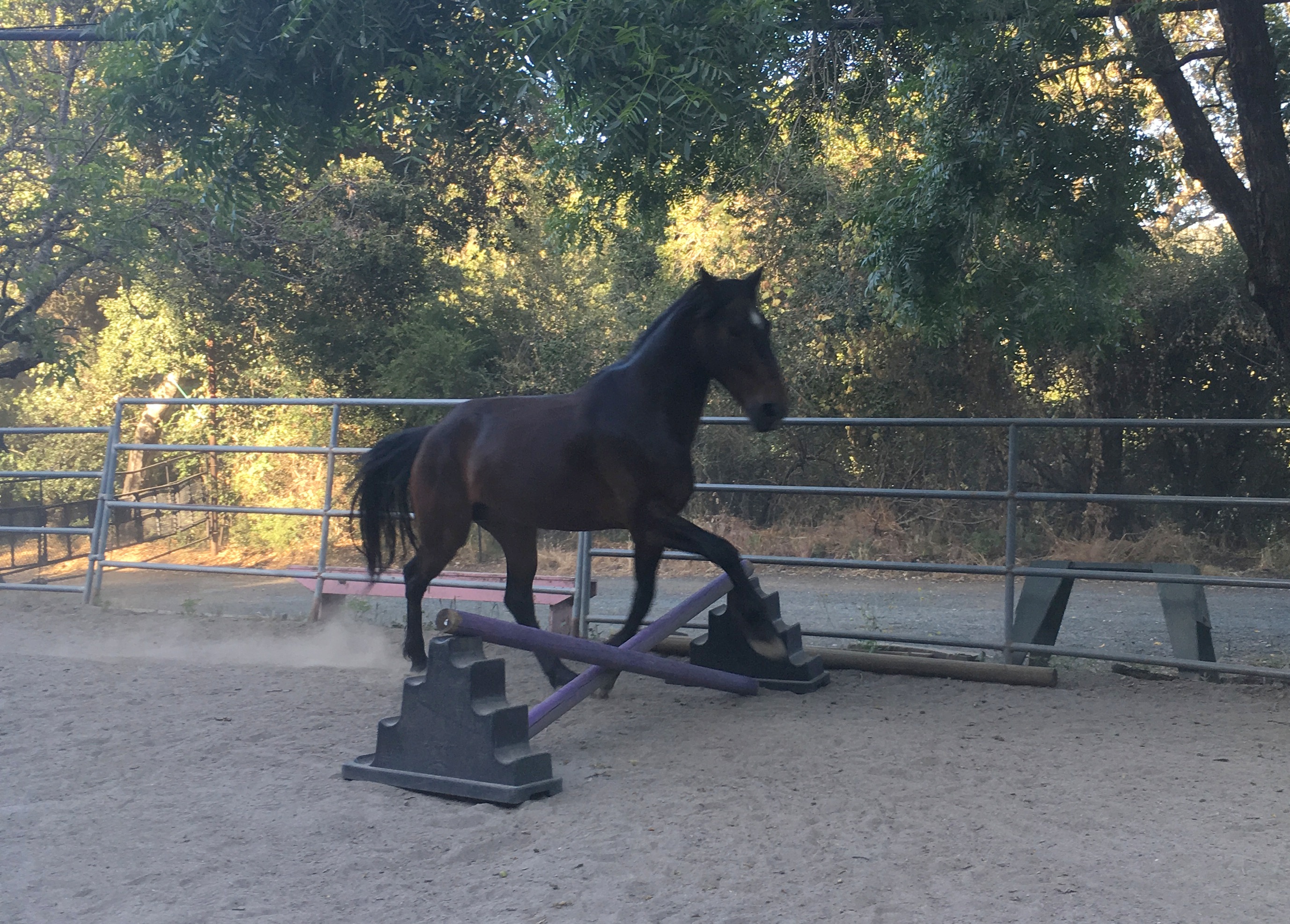 We did get a few attempts to jump, especially if we got him cantering at the jump, but the arena is so small, it’s actually a bit hard for horses to canter in there. 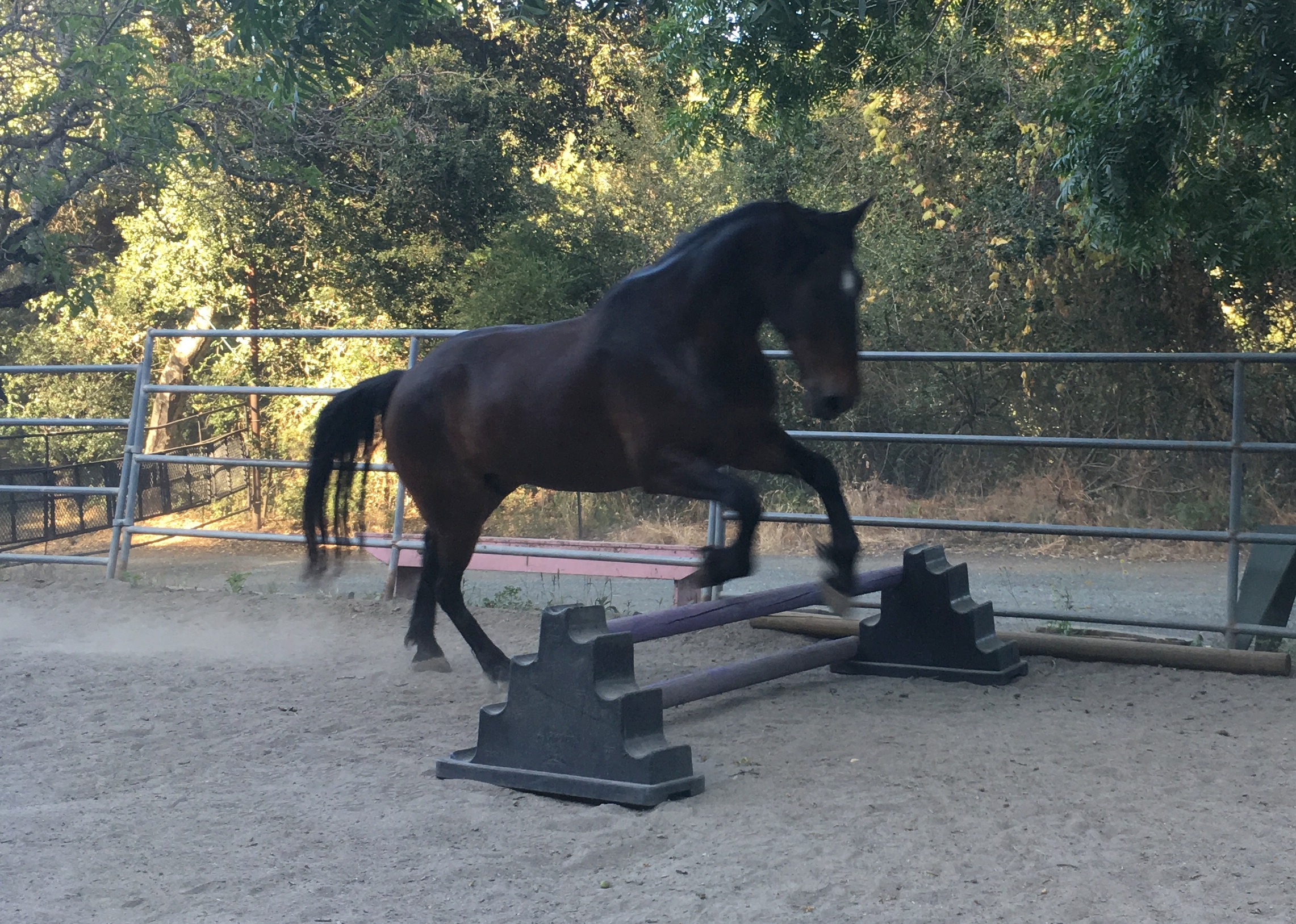 After doing a bit of this work, we tacked up and rode and then turned them out in the small arena to roll. After rolling, I went in with the lunge crop and asked Nilla to pop over the little jump. Eugene followed her and finally actually jumped. Unfortunately, I didn’t get any pictures that night, but we repeated the process again another night. Something about following Nilla around has really taught him how to jump.

Of course, Nilla hates this. Eugene wants to go a lot faster than her and keeps running up her butt, pissing her off. So we let him go in front and he jumped it without the lead in, though with a bit more hesitation.

Although there’s still a lot to be worked on, this little trick of jumping him with Nilla has translated to under saddle jumping. 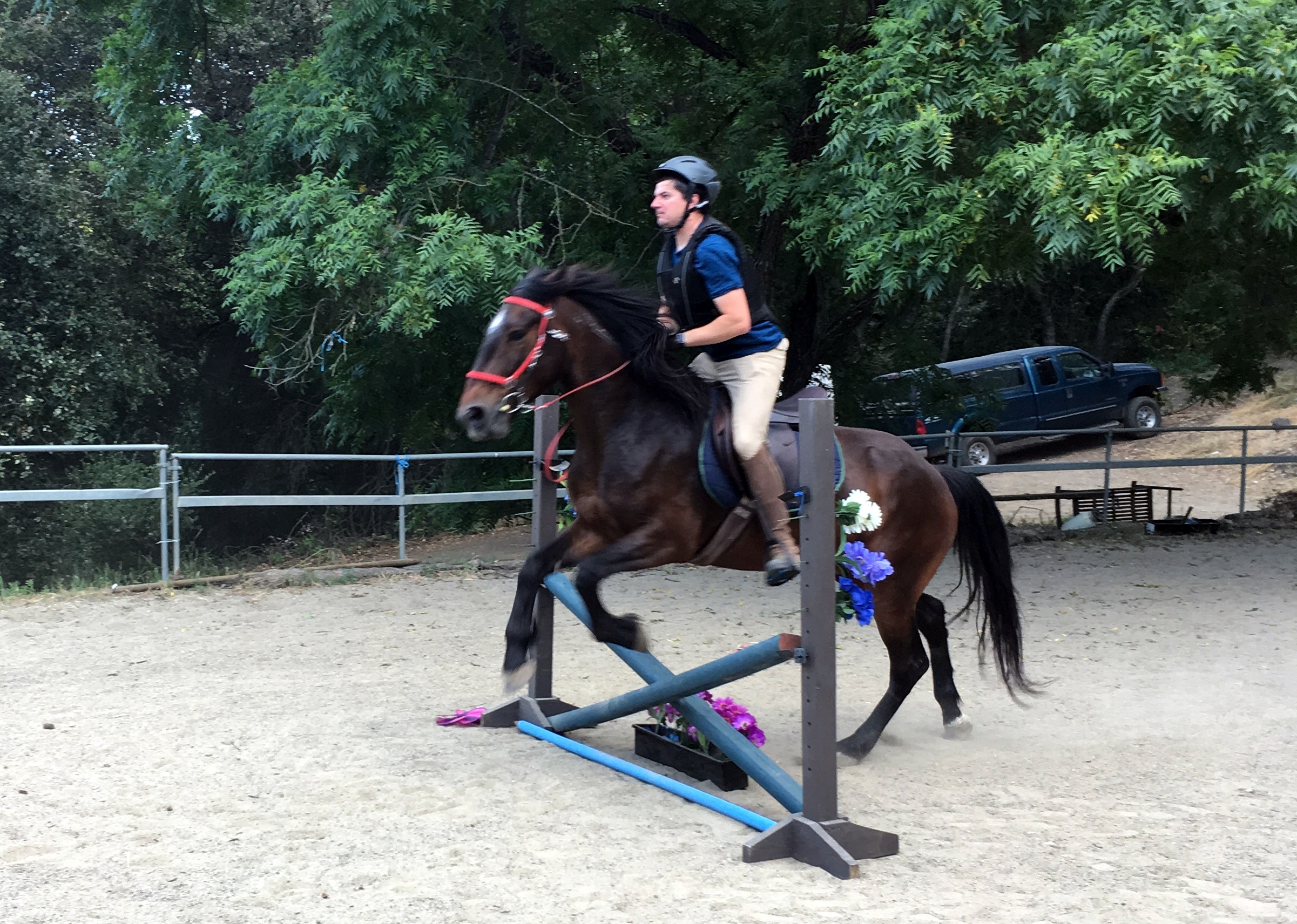 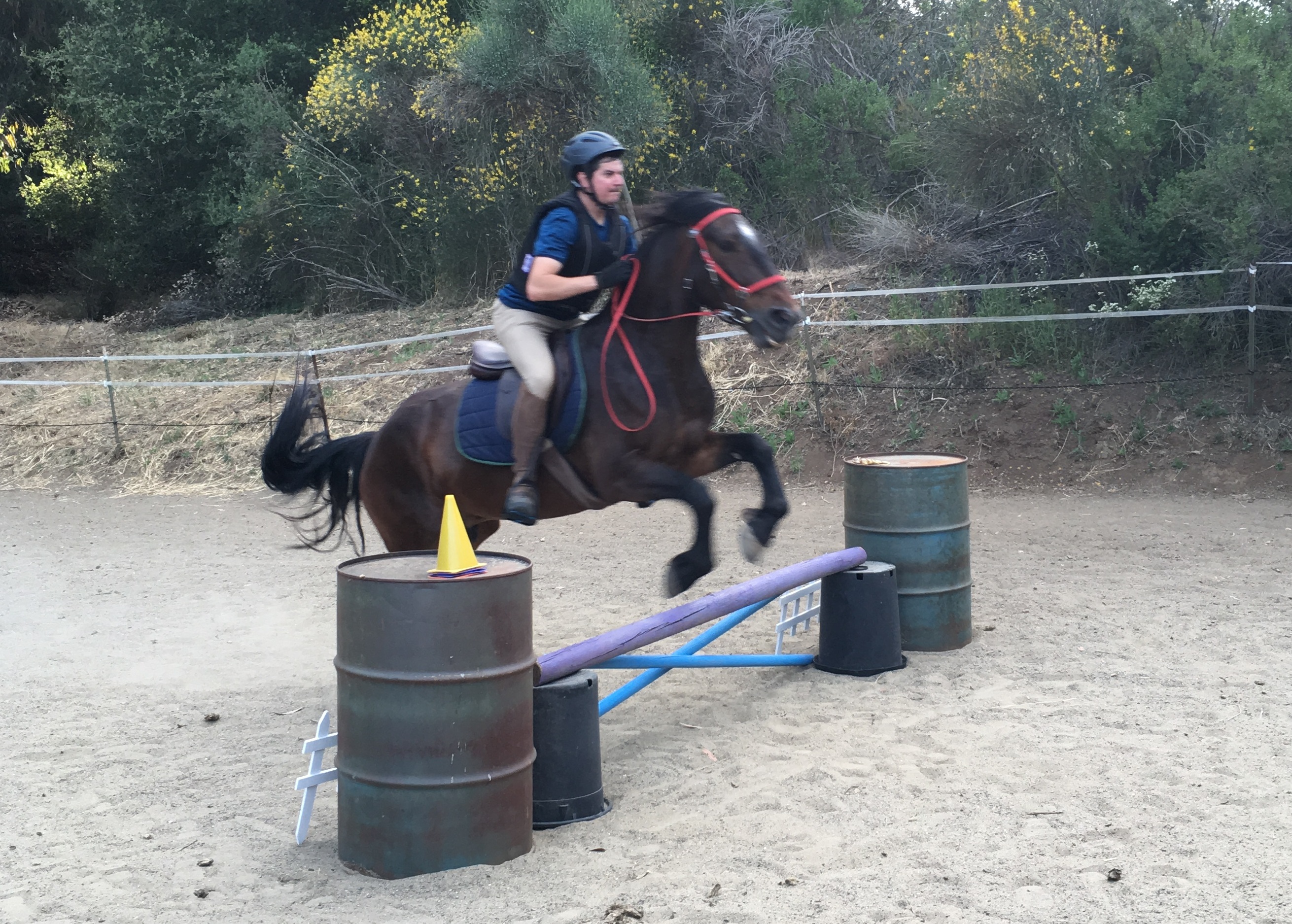 The last two pictures are from my husband’s last lesson with Seasonal Trainer. She’s done for the spring and we won’t see her until one visit in July and then not again until fall. So we’re on our own for a bit to continue Eugene’s progression. We’ll probably keep doing a mix of free jumping and under saddle work. Does anyone have any other tricks/training advice to help horses learn to jump? 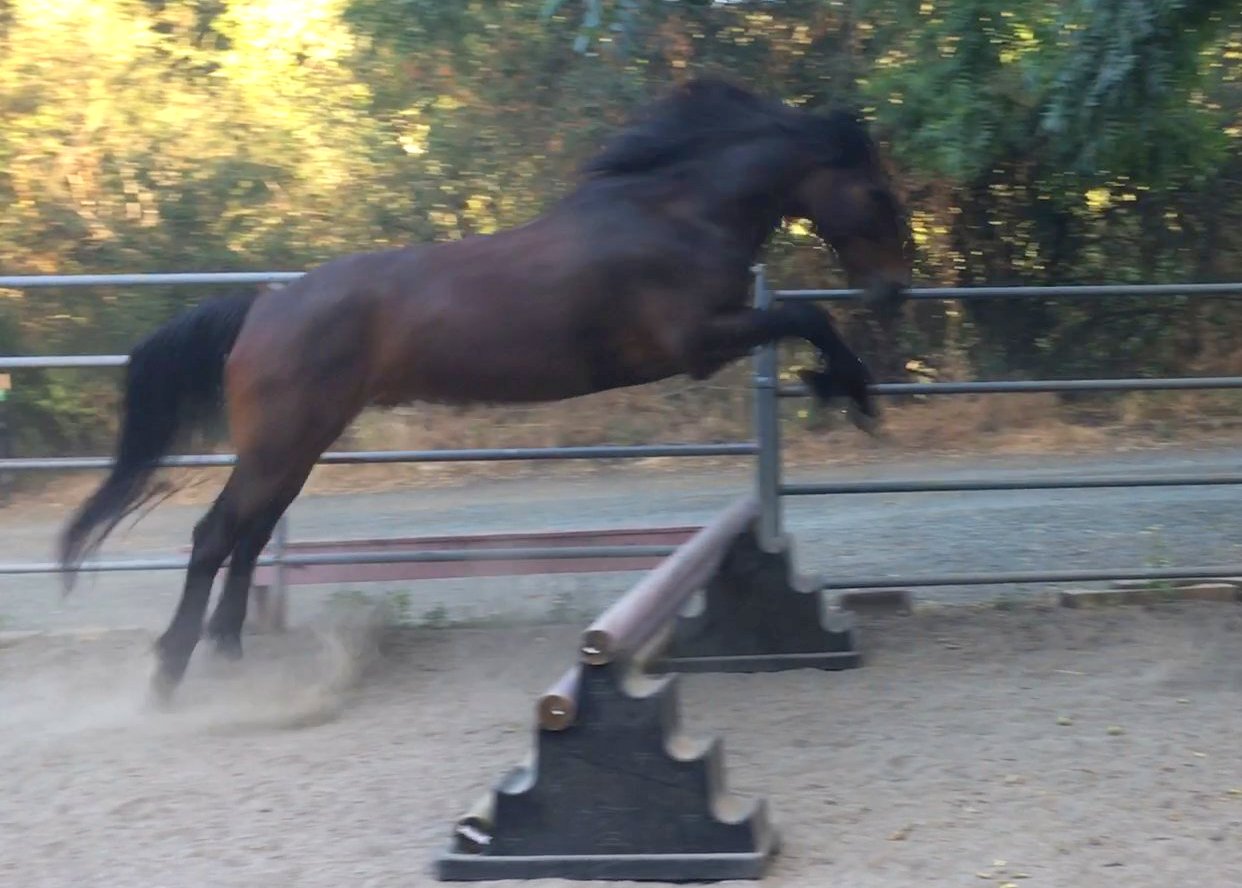 Edit: This would have been the first post of 5 in the customized prize contest, but it published early because I apparently never changed my settings away from time zone zero. I have fixed that going forward. Wednesday’s post will now start the 5 posts to comment on. Sorry for the confusion.

33 thoughts on “Eugene the Jumping Mustang”