A trainer who we’d met at a few local shows was hosting a schooling show at her barn and tracked us down to invite us. We’re not big hunter show fans, but this show was pretty intriguing. There were quite a few interesting classes being offered and I like the trainer so we were down to try it out. 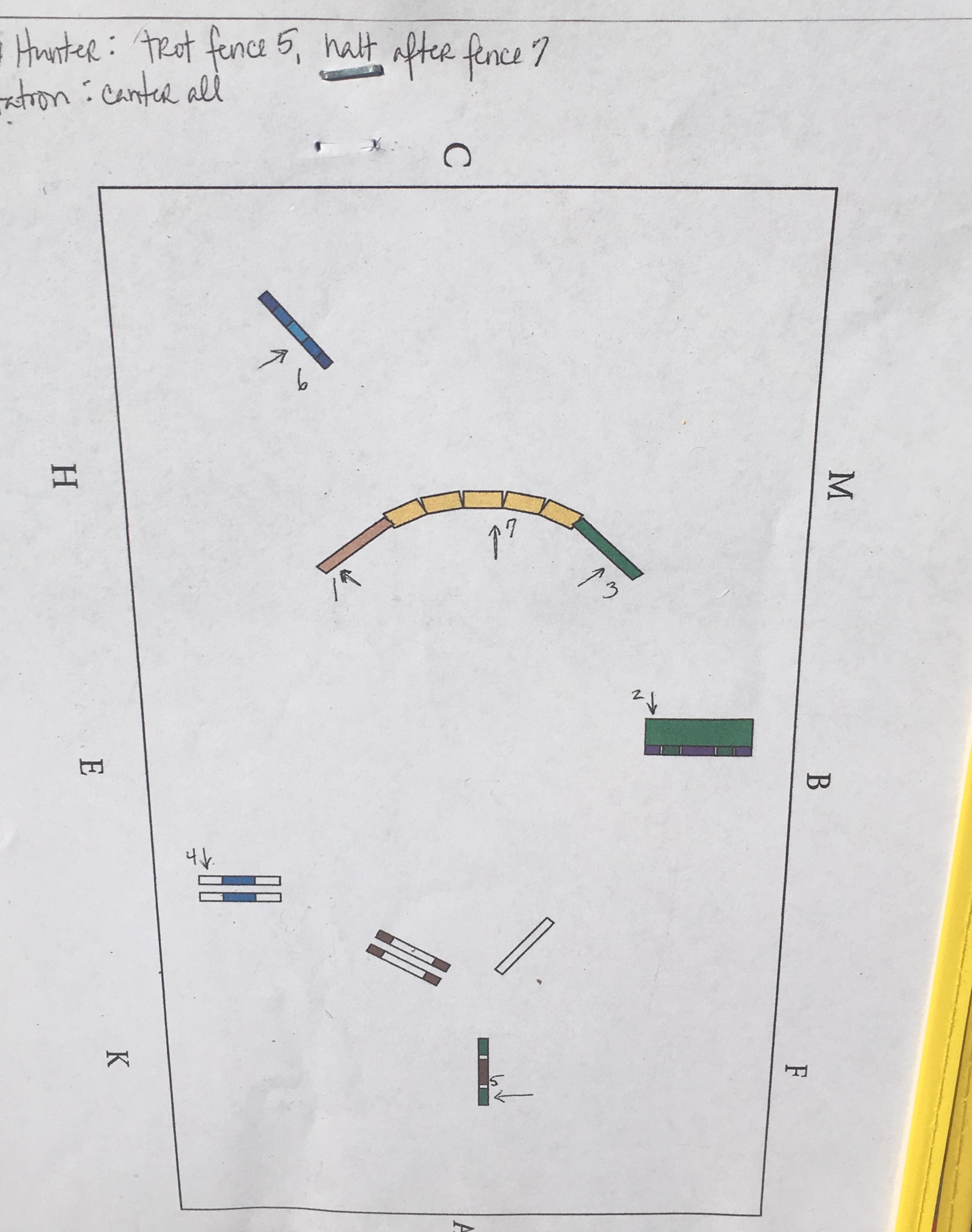 The course was both interesting and pretty challenging for a horse like Levi who likes to stop at jumps he’s never seen before. #1 was a natural coop, #2 was a astroturf rolltop, #3 was an astroturf coop, and # 7 was a semi circle of stacked hay bales.

Has Levi ever jumped a rolltop before? Nope. Hay bales? Also nope. Anything astroturf? Double nope. Sounds like a plan for success to me.

He was very distracted and sticky to #1, but a lot of leg and a little tap got him over. 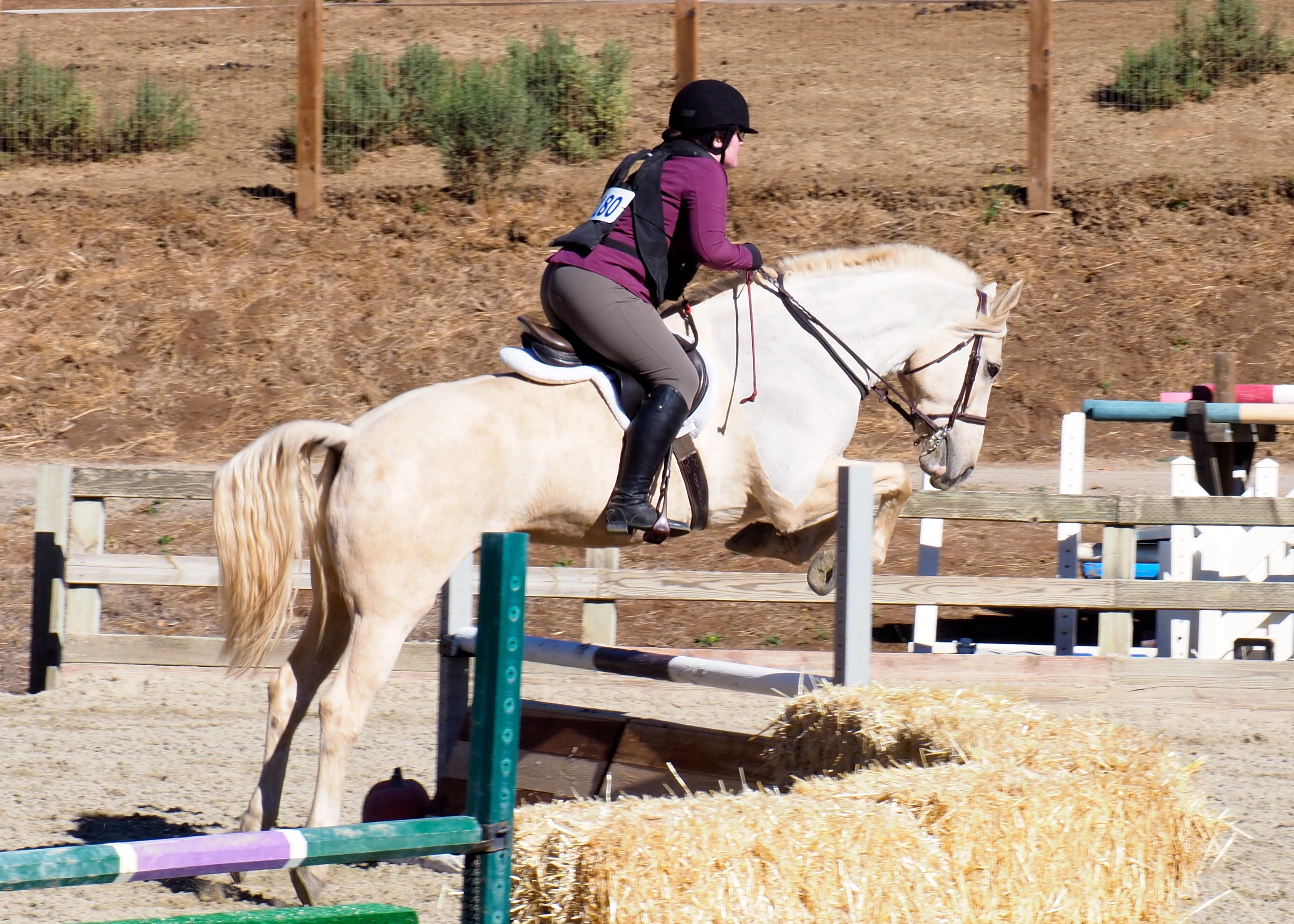 We circled around to #2, the rolltop, and he was like, what fresh hell is this and went flying sideways. So we came back around he slammed to a stop. 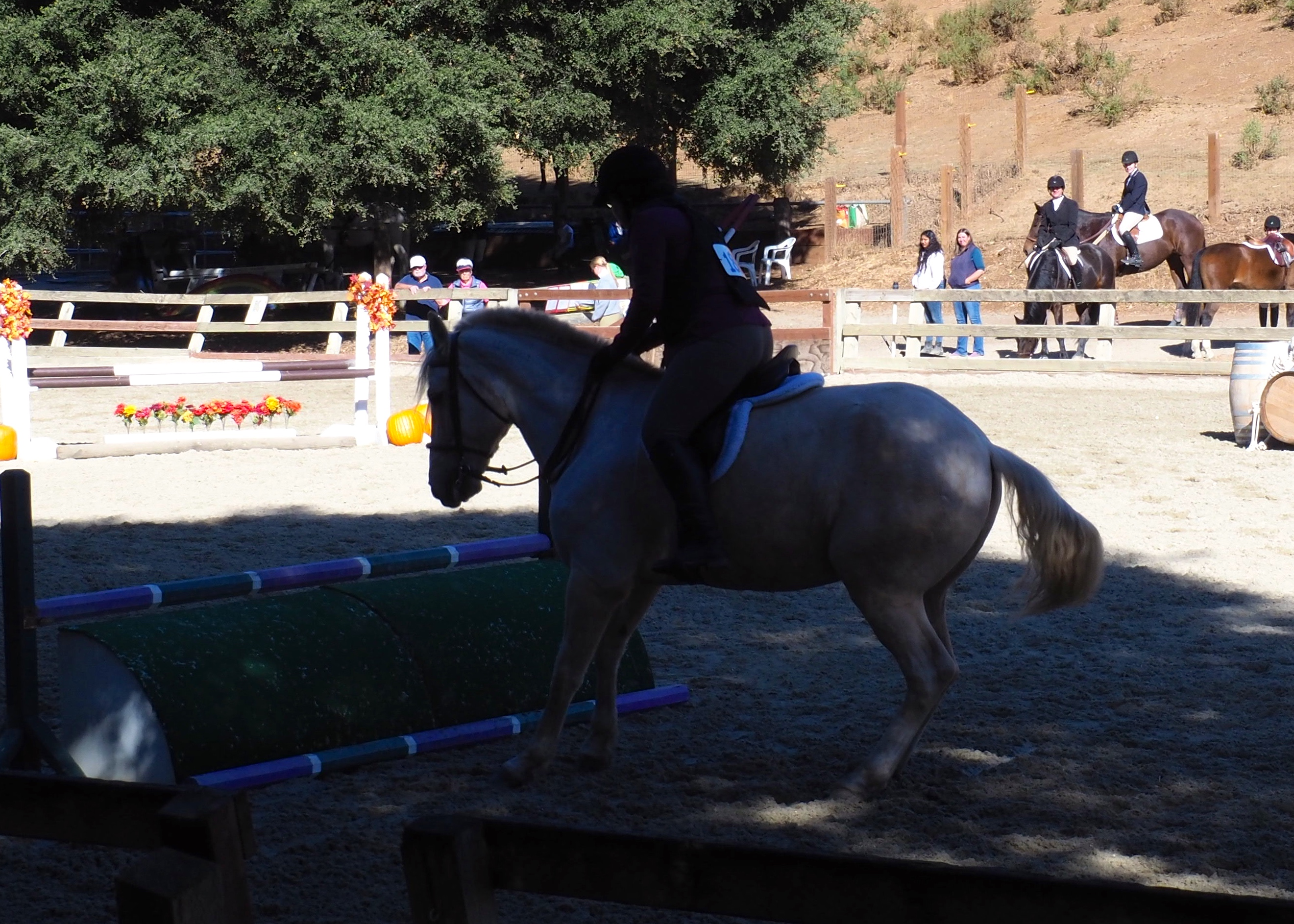 Finally, on our third try I convinced him to go over it, but he made sure not to touch it. Just in case. 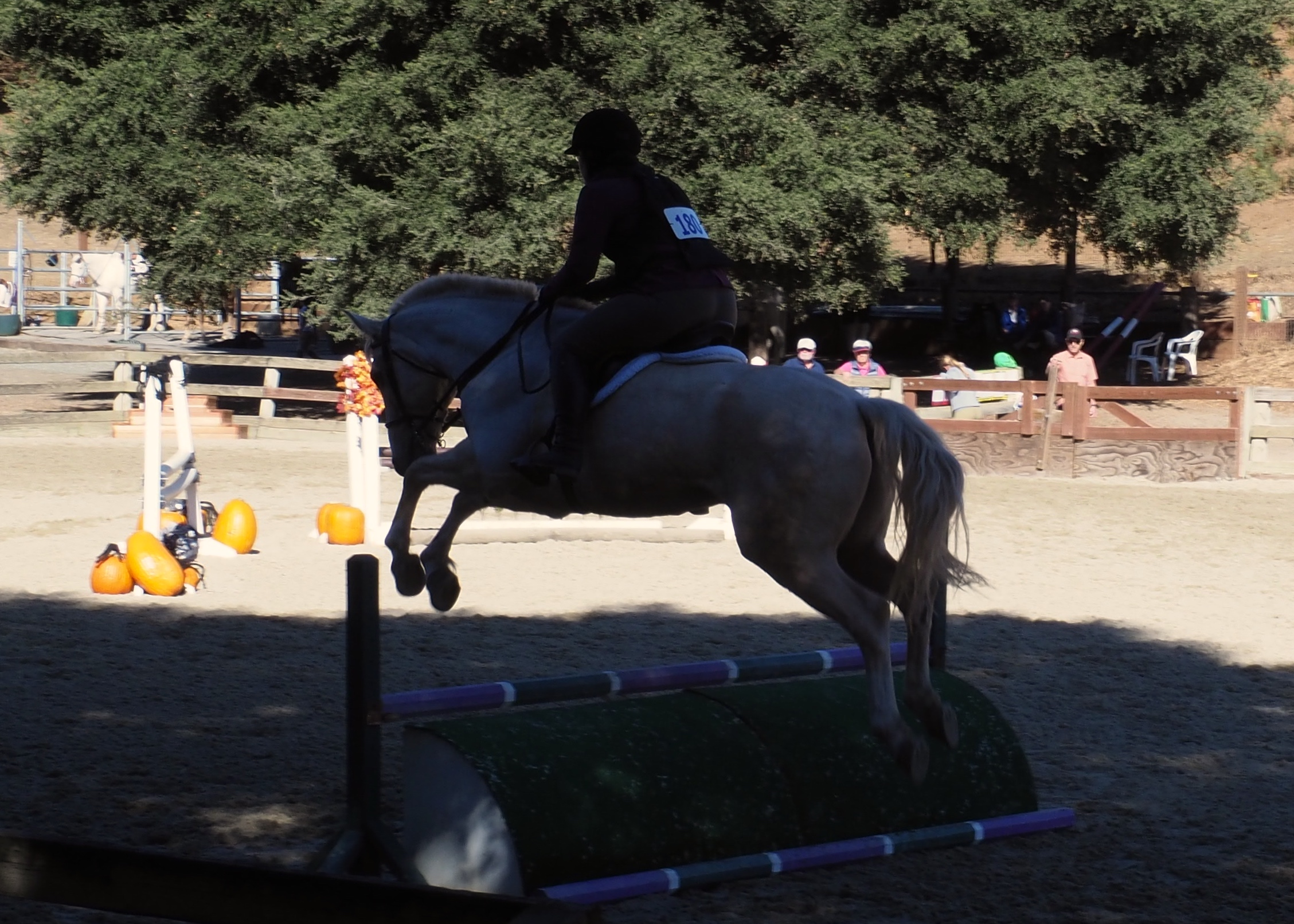 We came around to #3 and he noped right out of that one too and thus we were eliminated. Which was extra annoying because not only were we not getting a ribbon, we didn’t get to school the rest of the jumps. 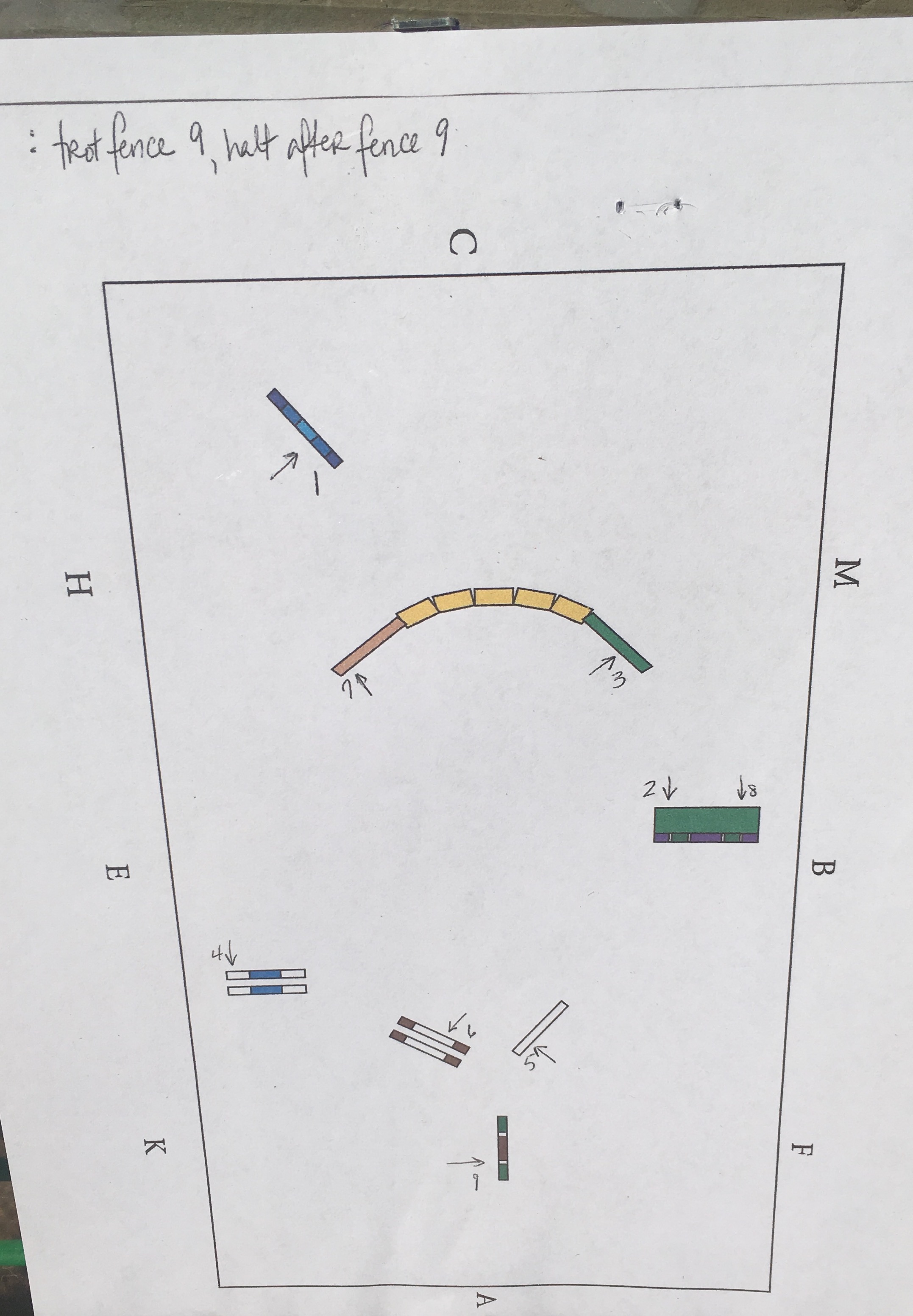 Fortunately our next course, the Mini Medal, was set lower at 2’3″ so the rolltops got moved out and the hay bales weren’t included. Unfortunately, we’re not hunters. 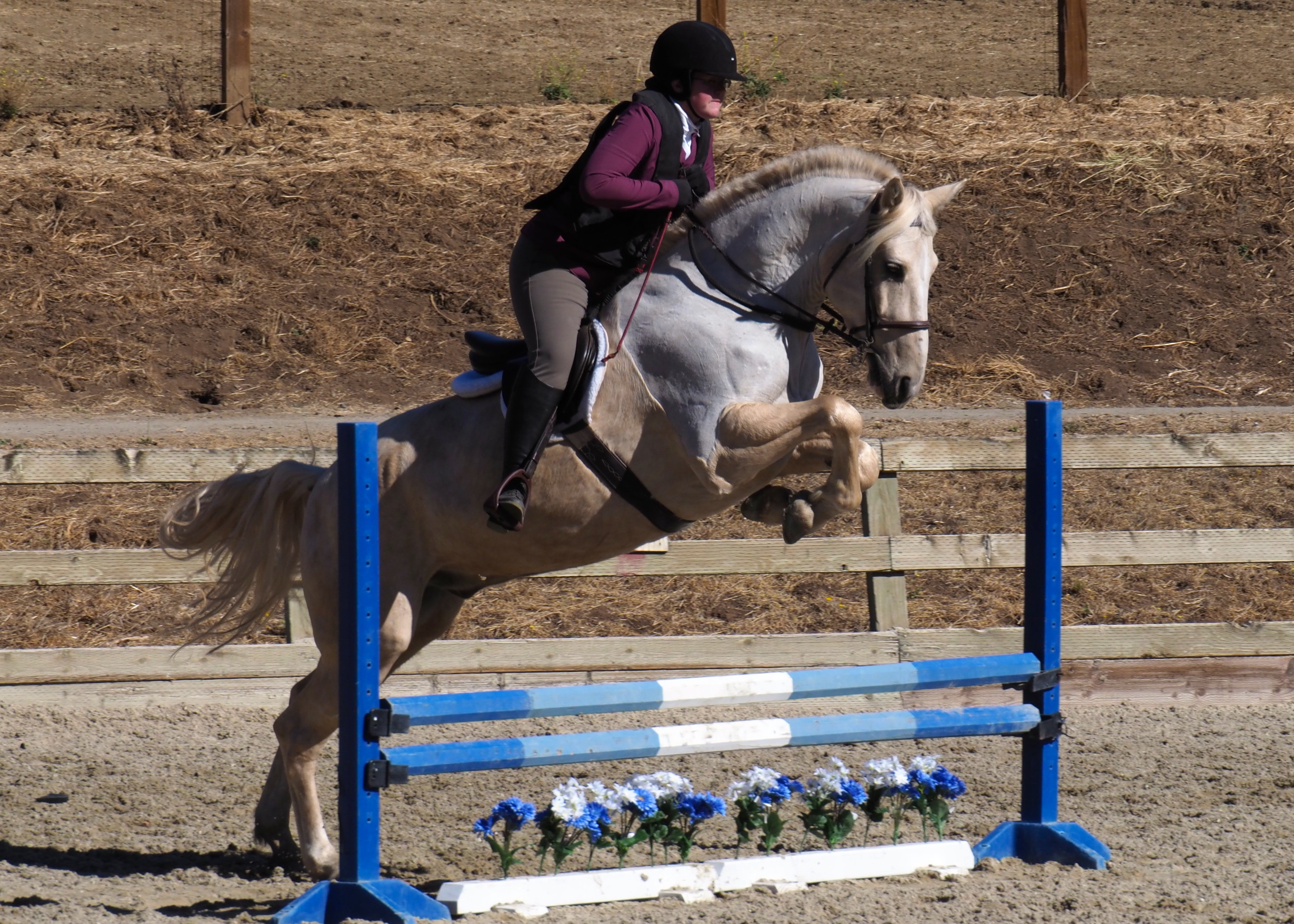 According to Wikipedia: “The show hunter should be mannerly and have the appearance of being a pleasure to ride.” This looks mannerly and fun right? 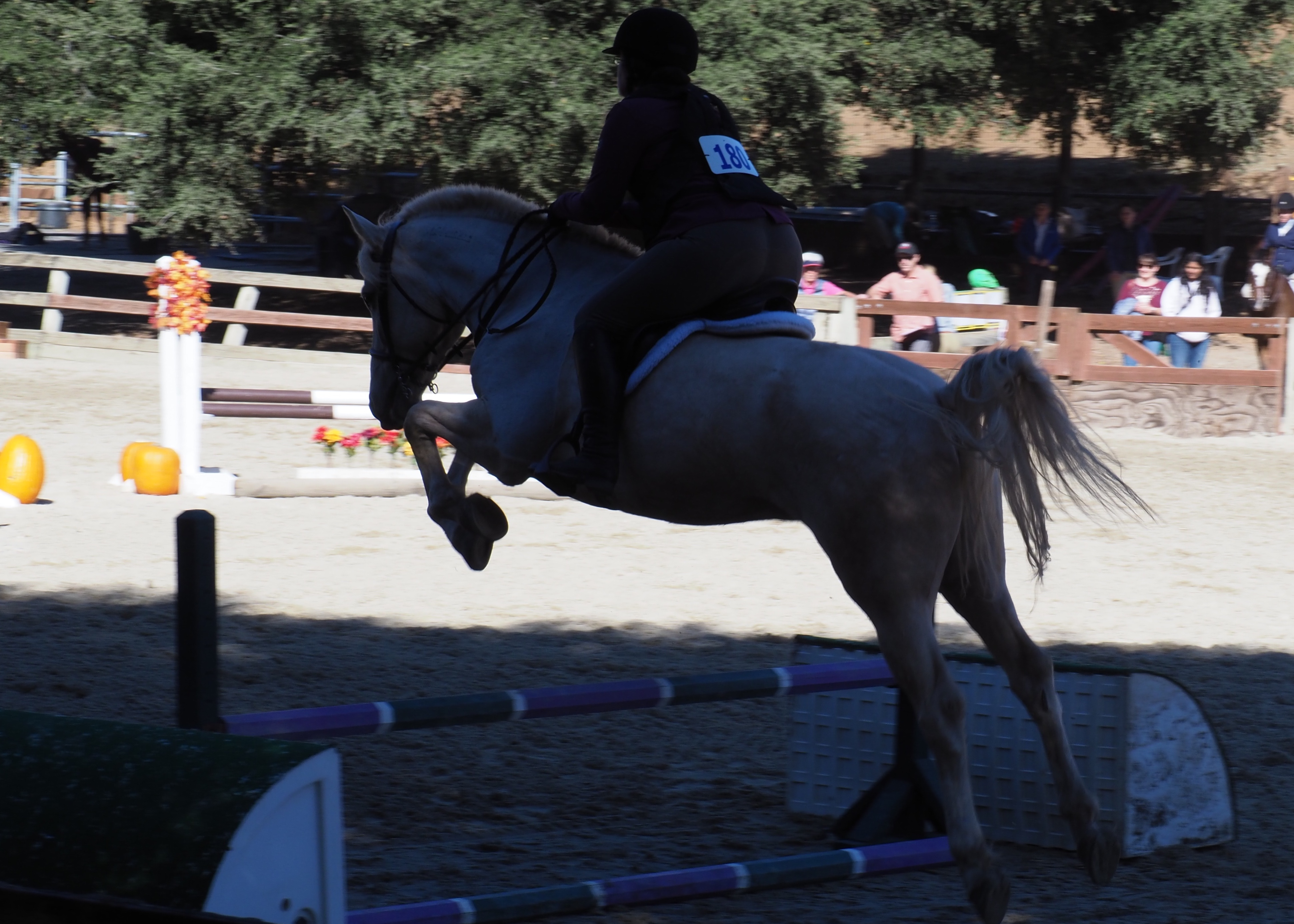 always with the tail sass

He was overjumping so much that I could hear the crowd gathered by that gate exclaiming when we landed off of 5:

I didn’t care though. I was just so happy to have him jump everything! He was eager and hunting the jumps like a good jumper. And look at those ears: 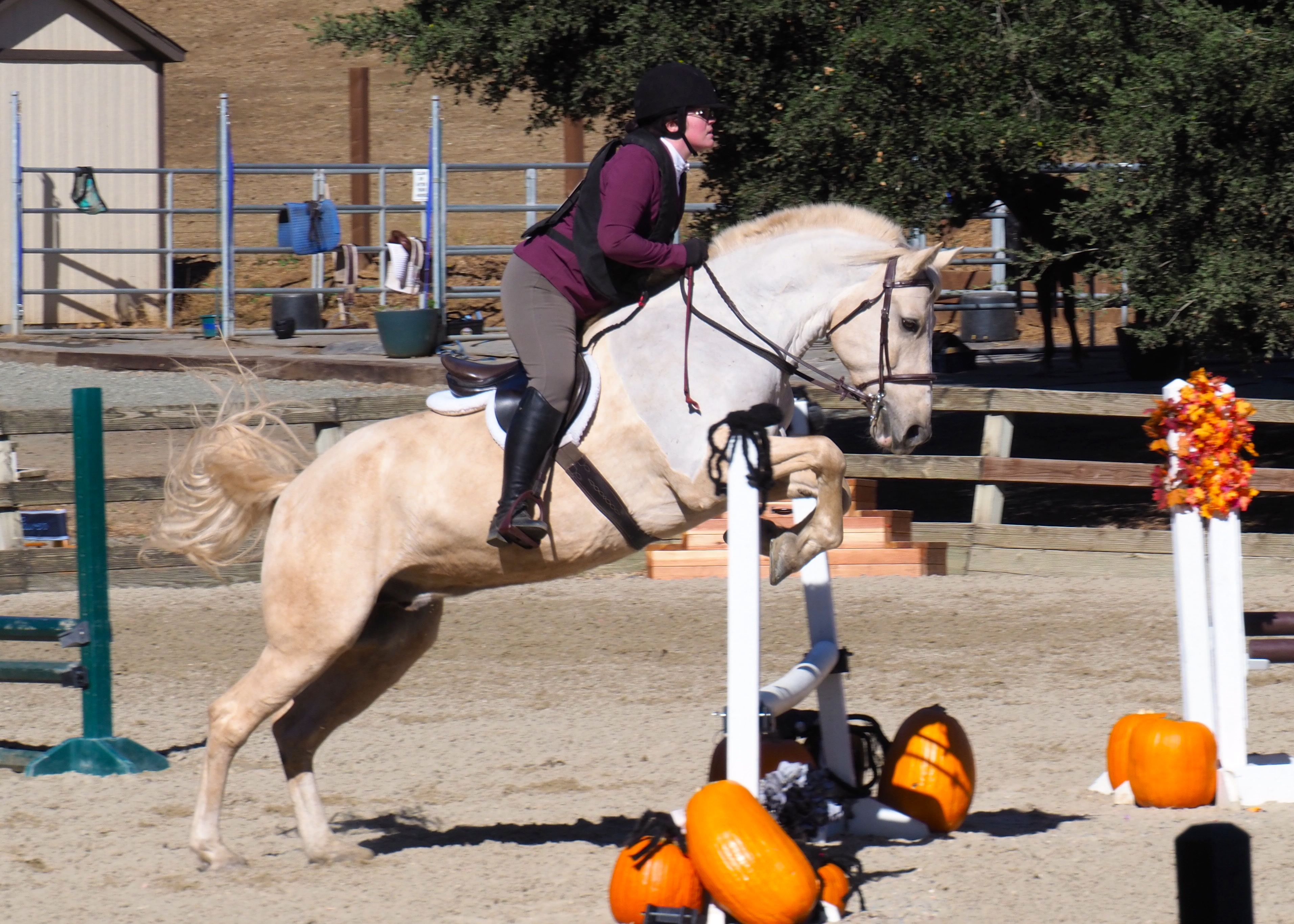 Look at the happy pony. Don’t look at the neck crawler.

Sure he’s a nut, but he’s a happy jumper nut.

We didn’t get called in for the top 4 flat-off. They were supposed to ribbon the Mini Medal through 8th, but only called out through 6th. I don’t know if my husband or I were 7th or 8th, but we weren’t in the top 6.

Next up was the 2’6″ Hunter Classic. There were two rounds. 1st round on the left and 2nd on the right: 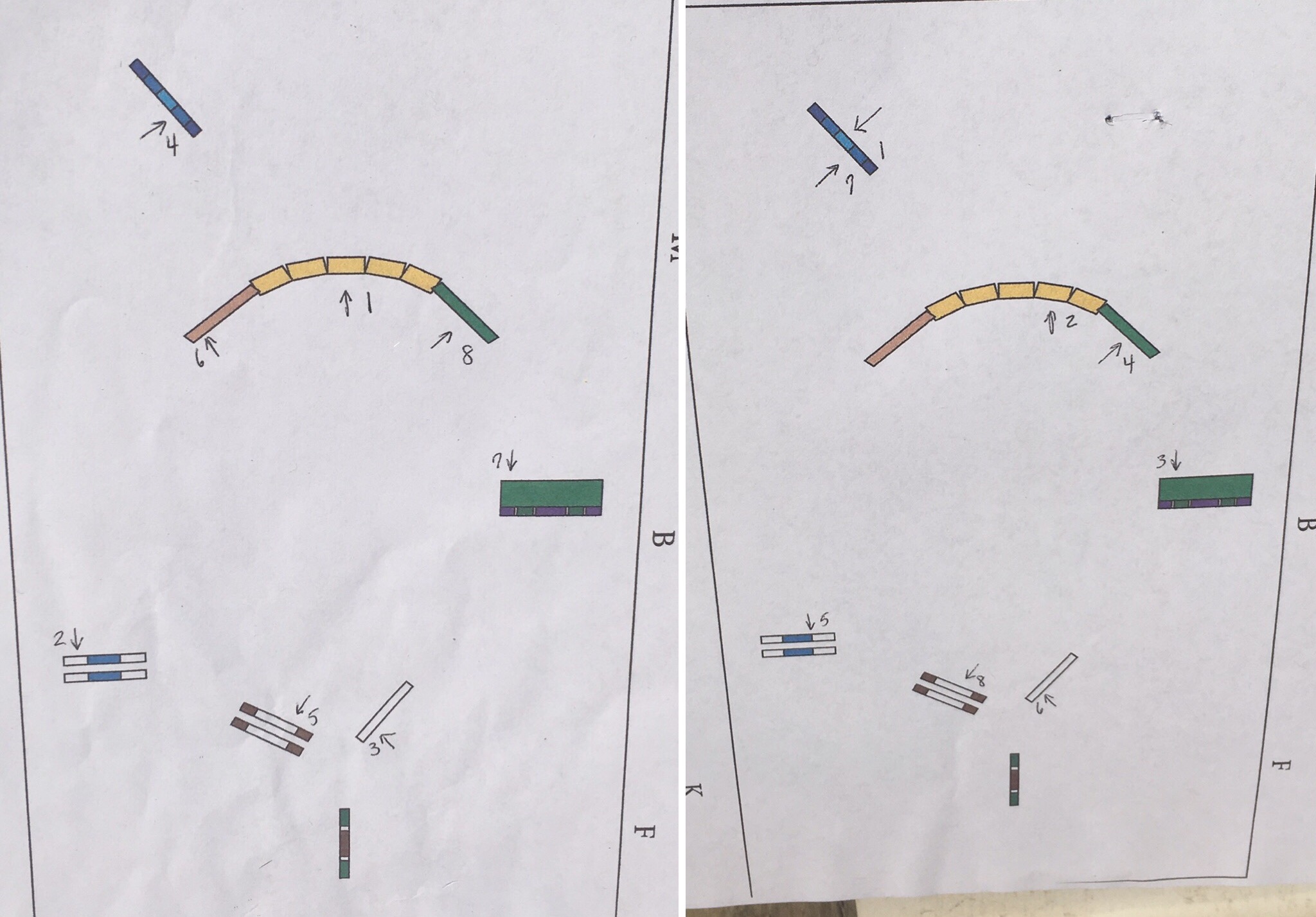 I thought there was a really good chance we’d get eliminated at that first jump; I figured we had about a 50% chance of making it over the hay bales.  He might see the jump as a solid obstacle like on cross country and go over it, or he’d decide it was a scary new thing and bail (pun not intended but I love it). 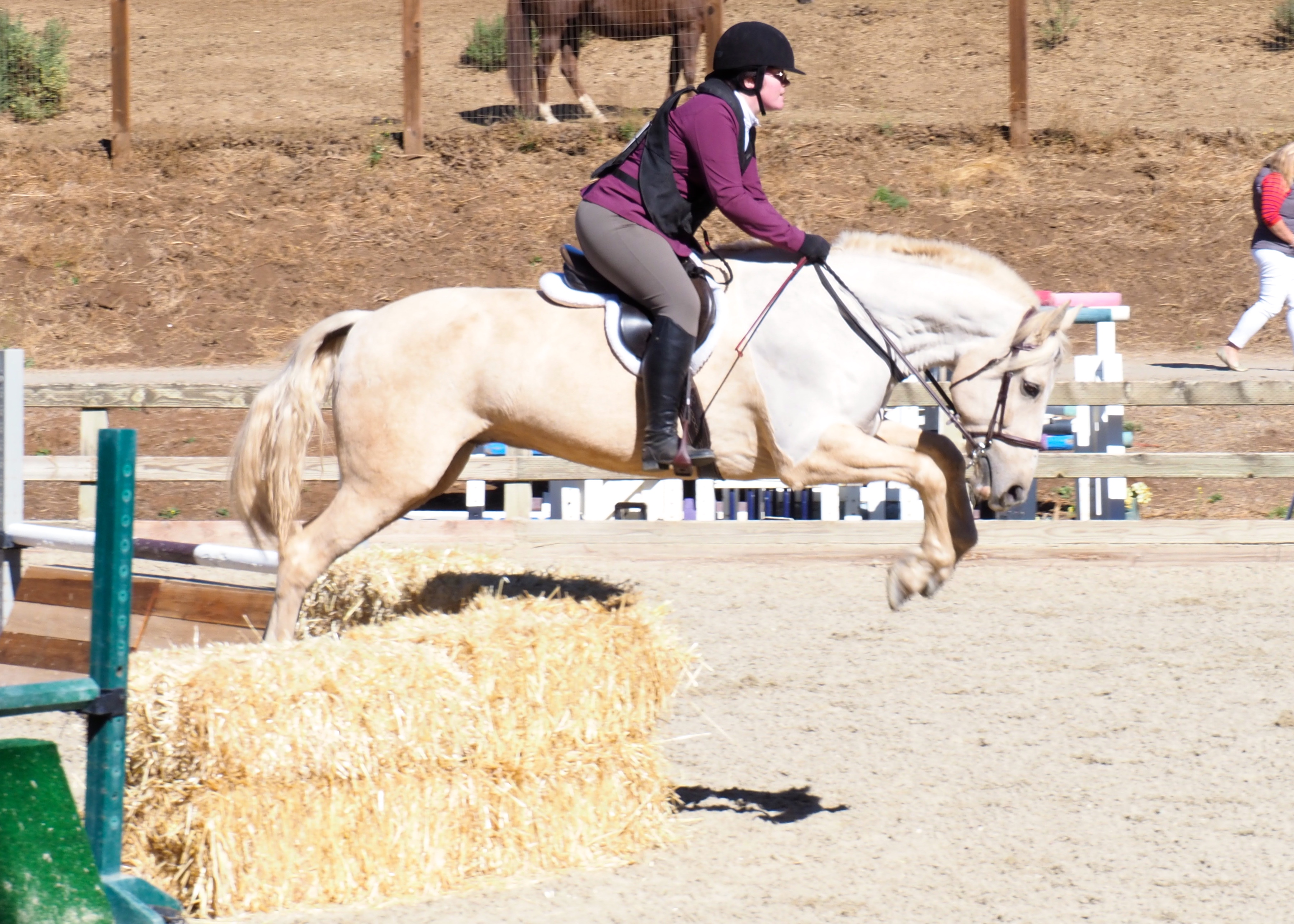 We got buried really close to the base, but he didn’t really even hesitate. While he continued to overjump everything and demonstrate why we shouldn’t do hunters, the course felt really good. 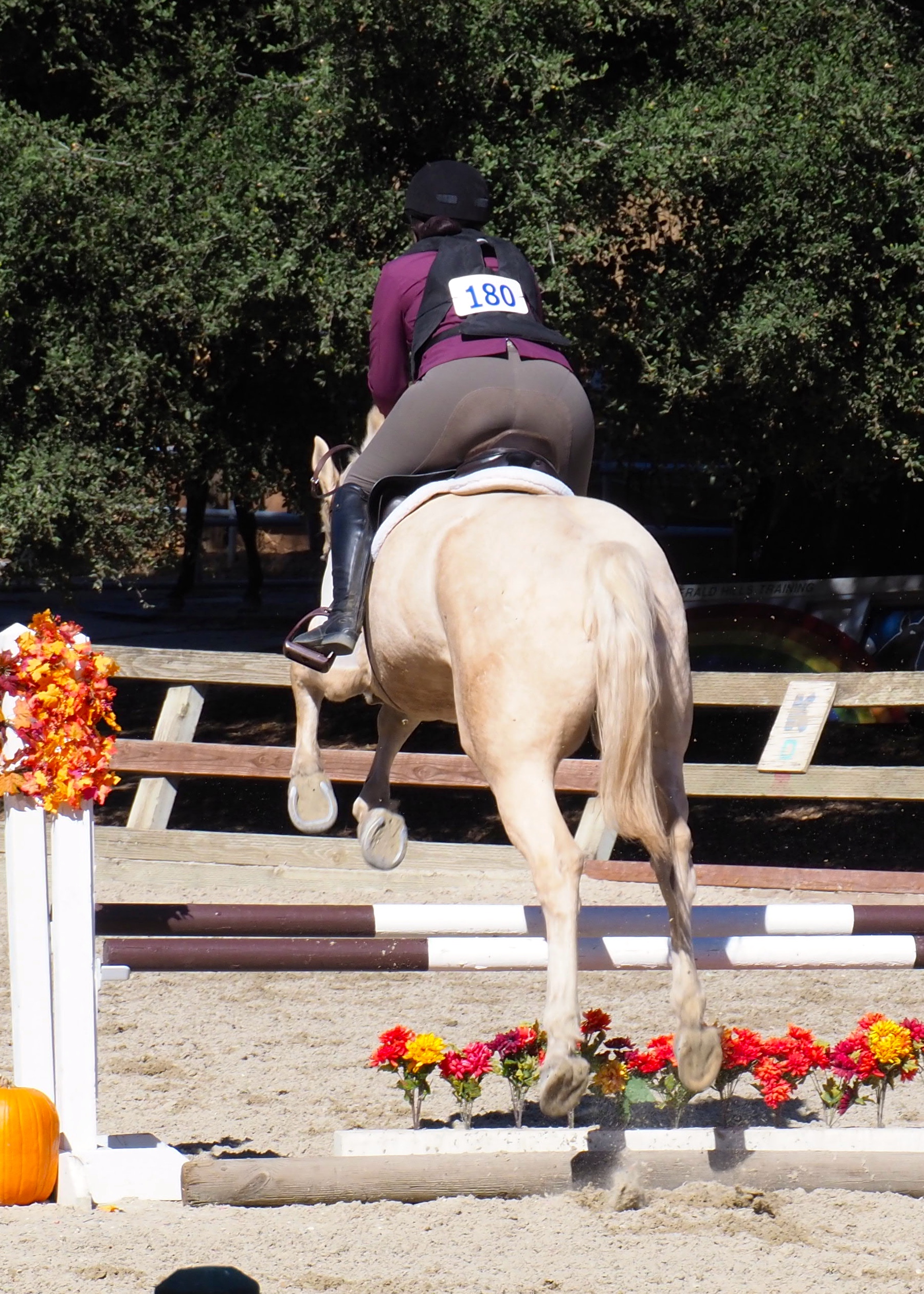 no joke, nearly fell off landing this one

There was no bucking and no attitude even though the jumps had been raised. He was just happy to do his job. Now I just need to figure out how to get this same horse during stadium at an event when I don’t have a practice round first. We ended up getting a 64 for our first round, but sadly, when I went in for my second round, I made it over the 1st three jumps (including the hay bales again Woohoo!), thought I had jumped #3 out of order, didn’t know where #4 was and had to walk out. So that went well. 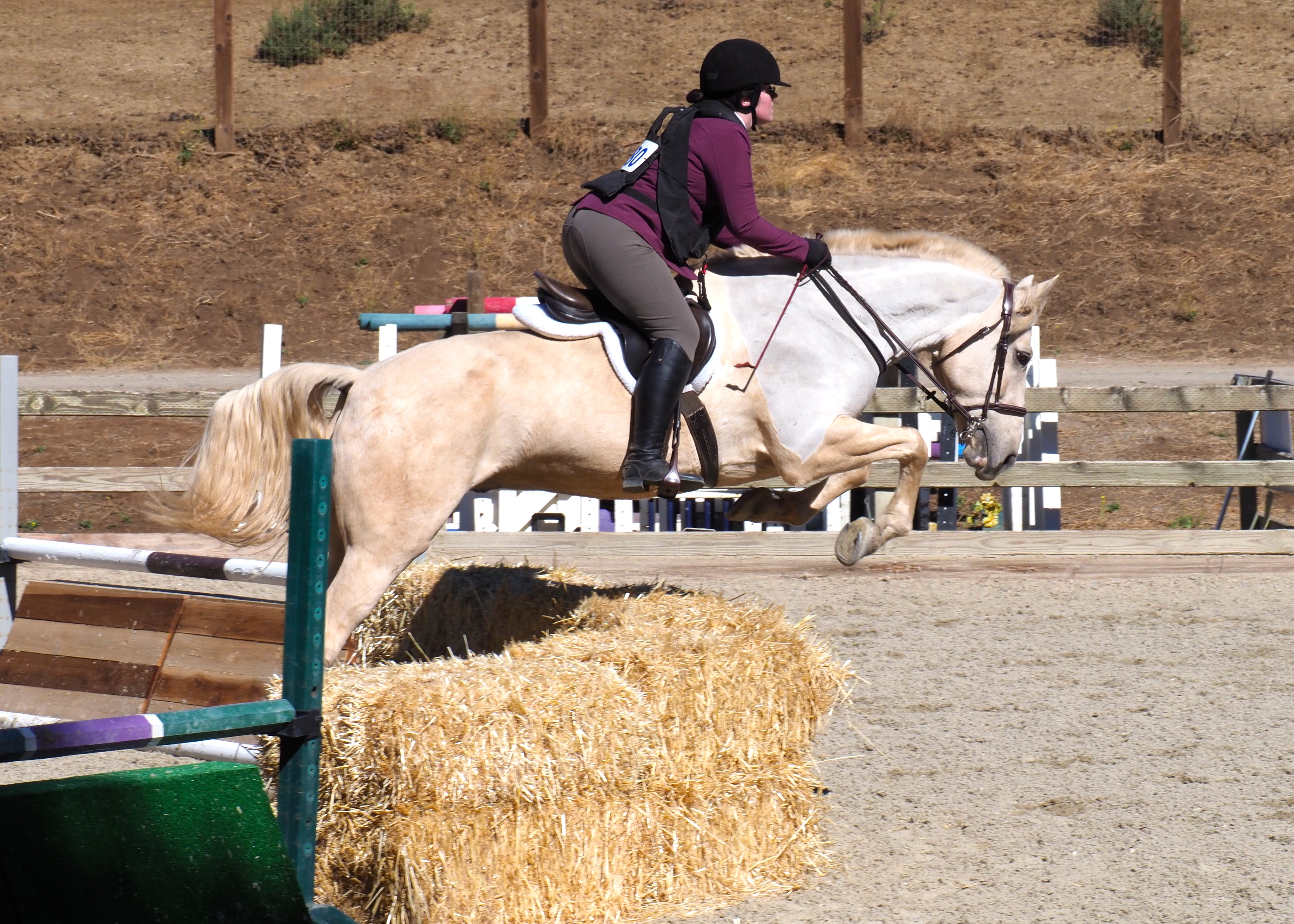 Skipping forward to the .75 jumpers, I was actually feeling pretty good about this class. Levi was behaving, none of the jumps were terrifying, and there were only 3 people entered so I could win a ribbon if I didn’t get eliminated. Once we got going I realized he was a bit tired from all the previous rounds. He was still over jumping most of the jumps, because that’s who he is, but the legs weren’t quite so tucked and he wasn’t really pulling me to the jumps. 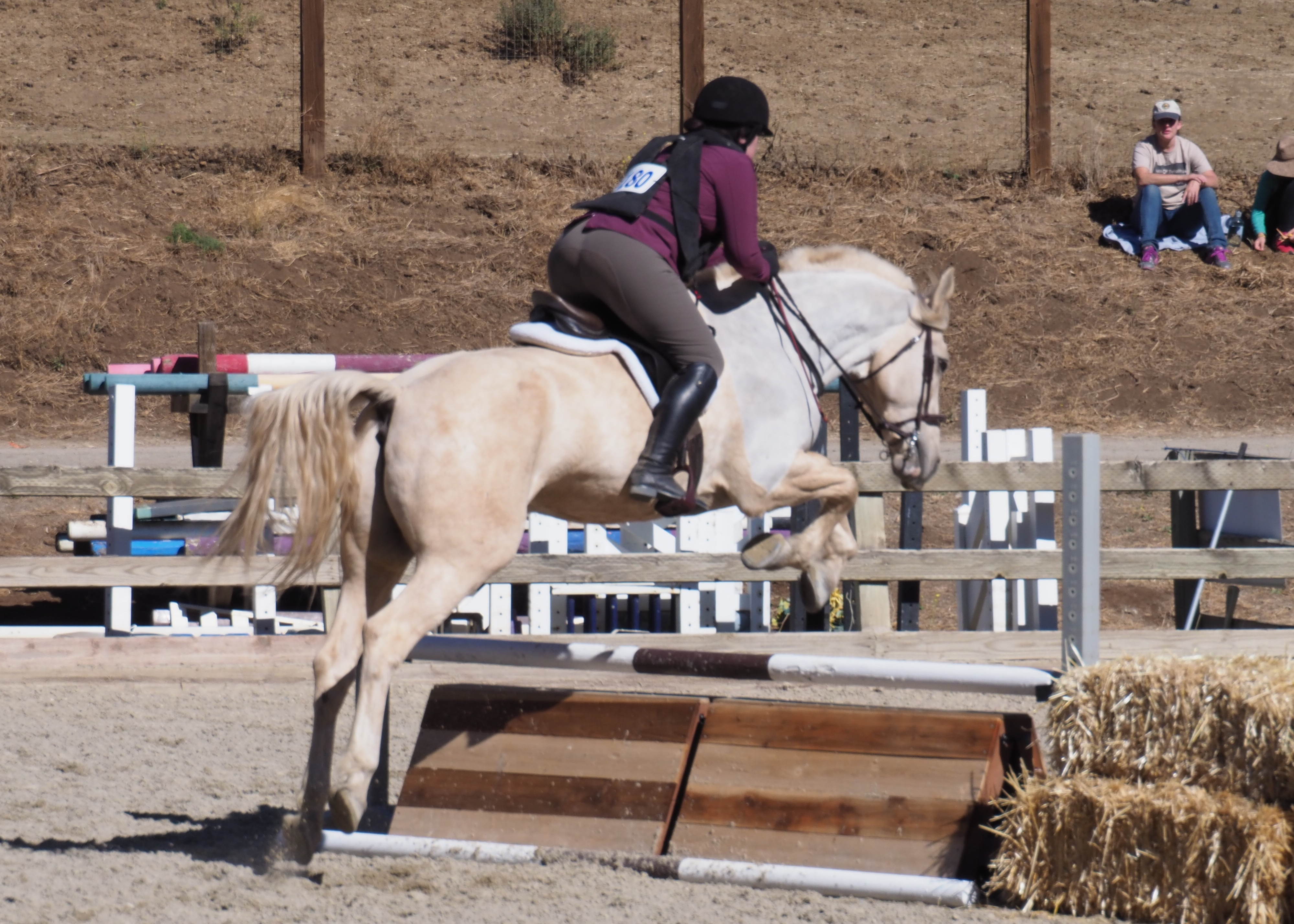 blurry, but you can see the tired

This led to the most awkward jump at #4. We hit it hard enough to wobble the standards and I 100% thought we knocked it down, but on turning to #5 I saw it was still up.

We are so good at this

I took all the long turns and focused on having a clear round instead of making time. He was really good even if he was tired and we ended with a clear round and like 16 seconds over optimum. But that was still good enough for 2nd! 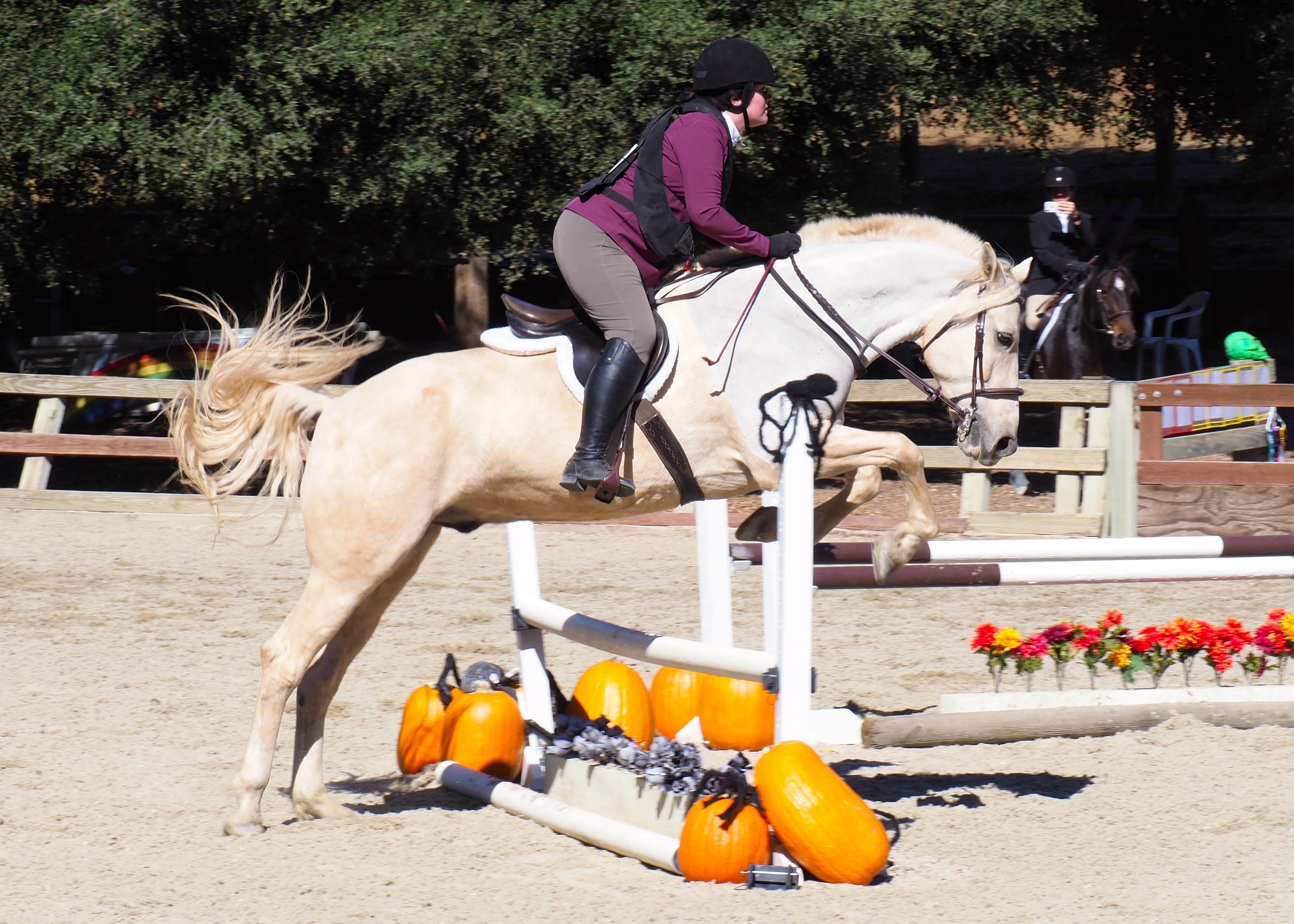 Such a good boy. Despite getting eliminated at the 3rd jump in one of my classes and getting lost in another, it was probably the most fun I’ve had at a hunter show in a long time. The courses were challenging and different and actually at the advertised height, the atmosphere was friendly and relaxed, there was no hurry up and wait, and the ribbons were really cute.

What more can you ask for.