My husband started the morning doing XC and they were doing a pretty cool exercise in the other field. There were a few standards and poles set up at the larger bank complex so they could practice jumping bounces and one strides before and after up and down banks. 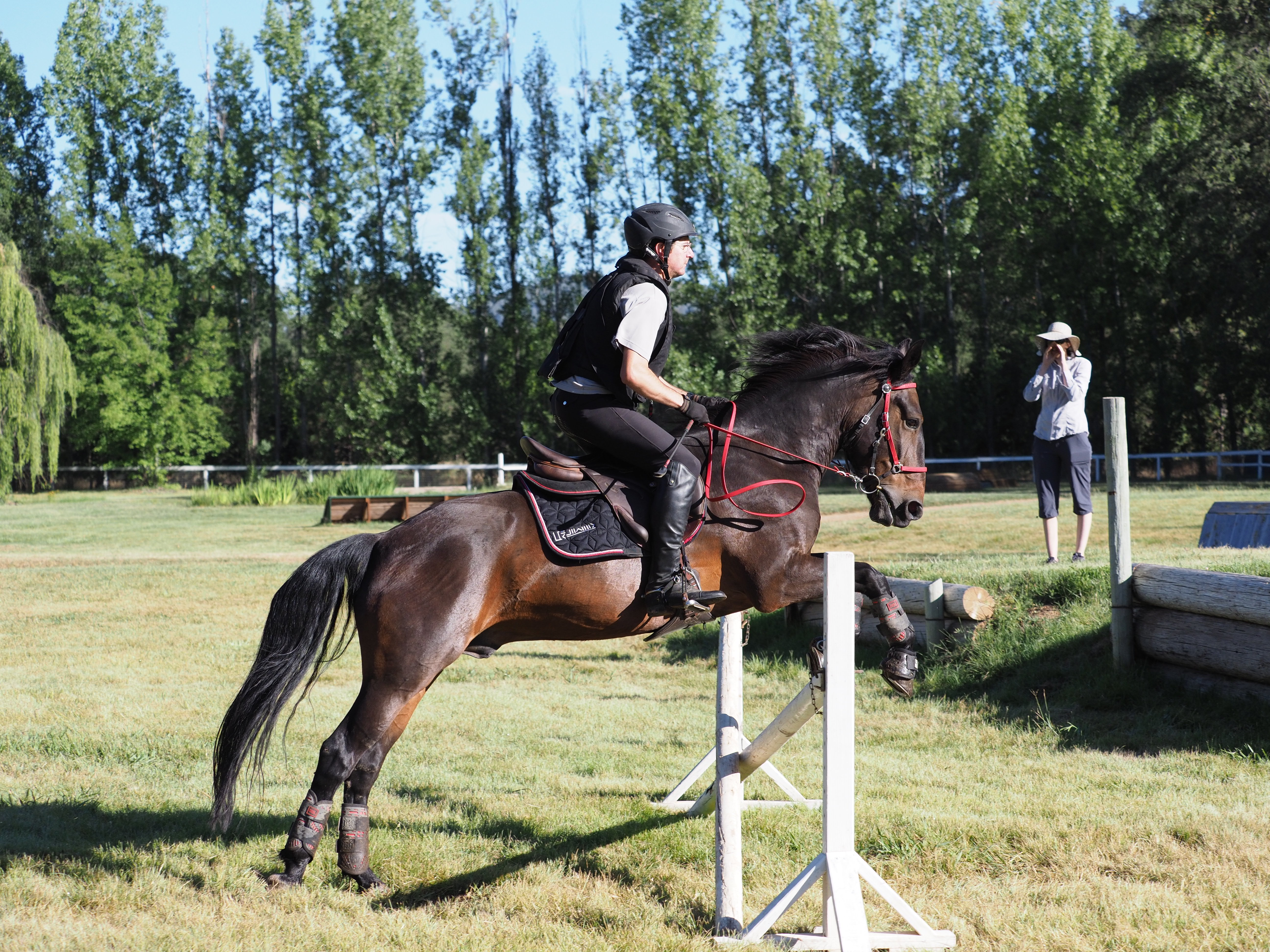 This is the sort of exercise that would terrify me since I hate down banks and jumps on hills, but Eugene is so sure footed, my husband really enjoyed it. 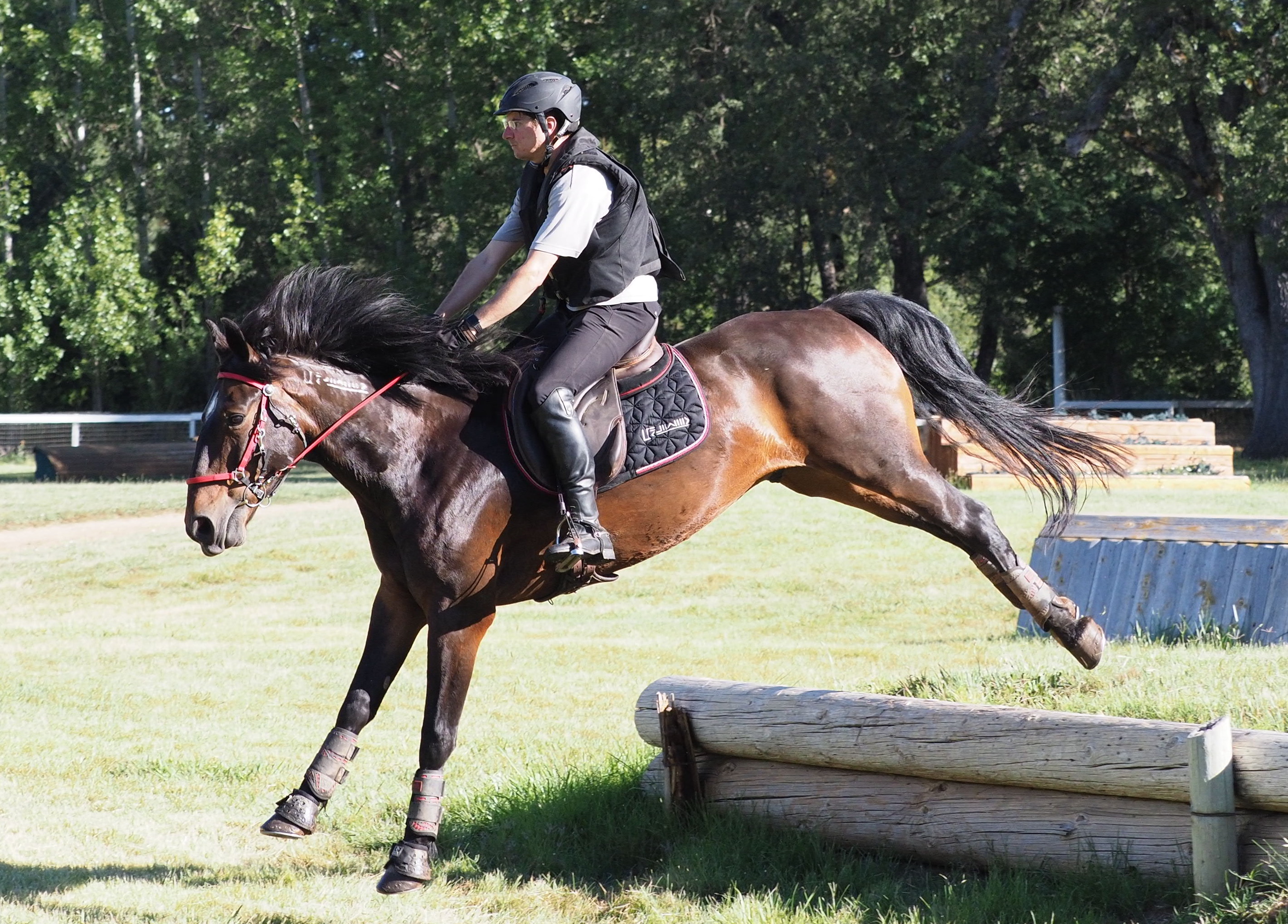 After conquering the banks, they moved on to doing a few courses around the field including a two-stride log combination. My husband was really happy to get to do some of these jumps at Eventful since he missed doing camp with Eugene last year because of Eugene’s injury. He had to ride Levi in the intro group instead and had been itching to try out some of the bigger jumps. 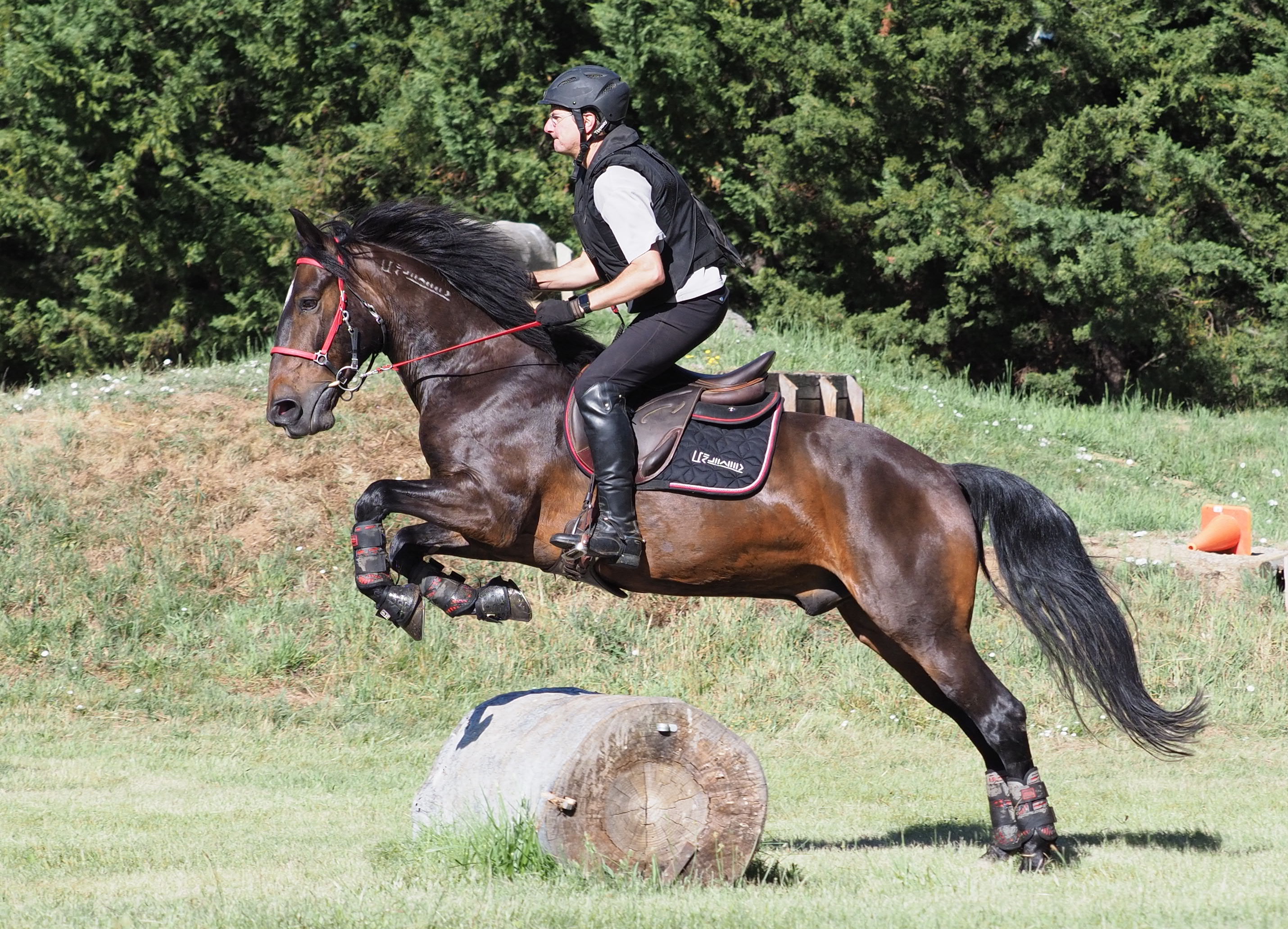 My XC lesson was an absolute disaster. We started with ditches and I hate doing ditches. My dislike isn’t what you might think. Levi couldn’t care less about ditches. He doesn’t stop or spook or launch over them like some horses do. He’s so unconcerned that, if we’re only trotting, he’ll just step through them. 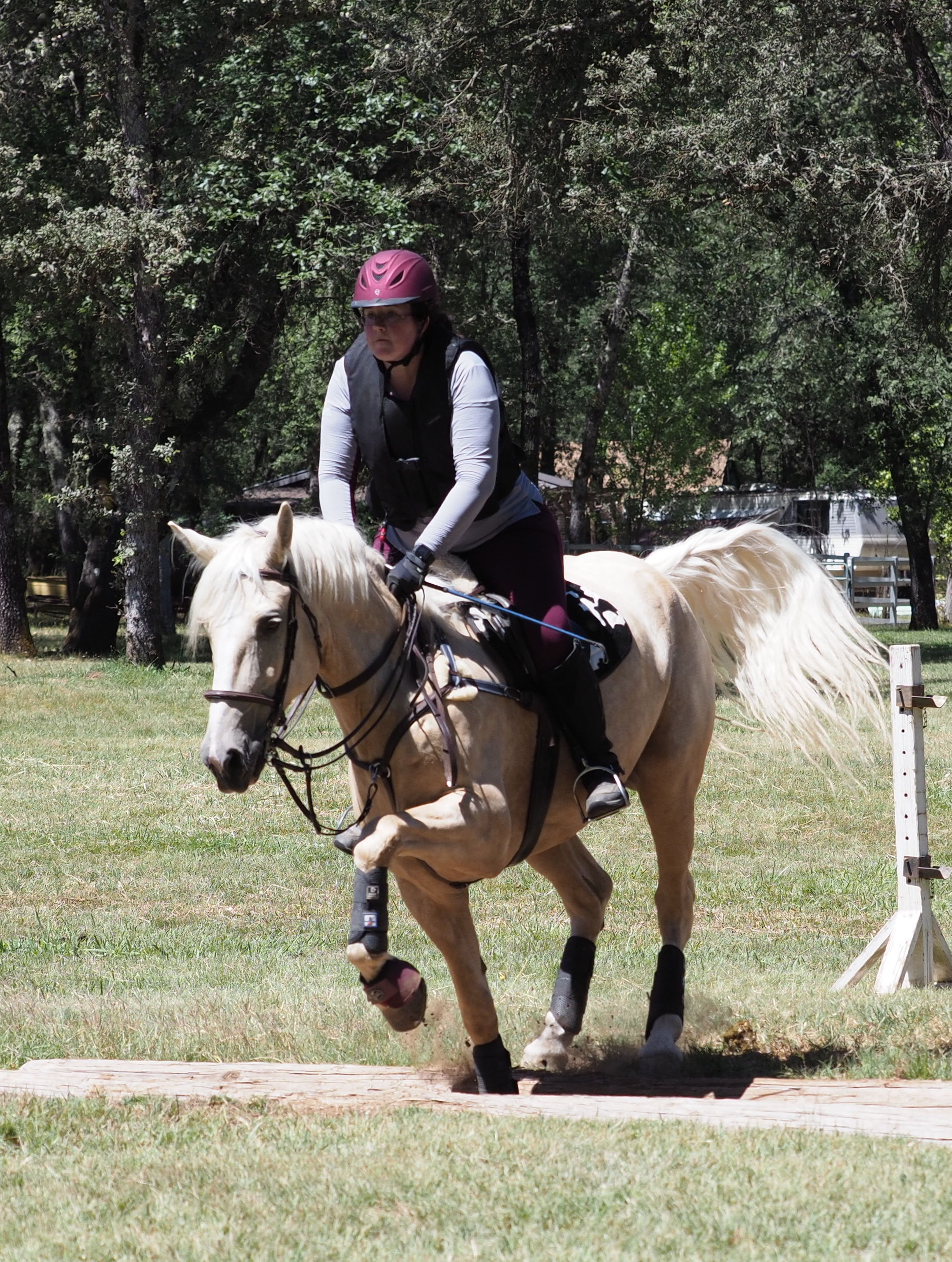 Which terrifies me because it’s an awesome way to break a leg. If we canter, he’ll jump them nicely. I’ve really never had a problem with him and ditches. However, the group XC schooling setting had him all riled up. When he’s acting like that, I don’t trust him to canter jumps. This leads to a vicious cycle: I’m scared of going faster than a trot, but I’m also scared of him breaking a leg in a ditch. Really, the best answer for the whole conundrum is to just not school ditches. 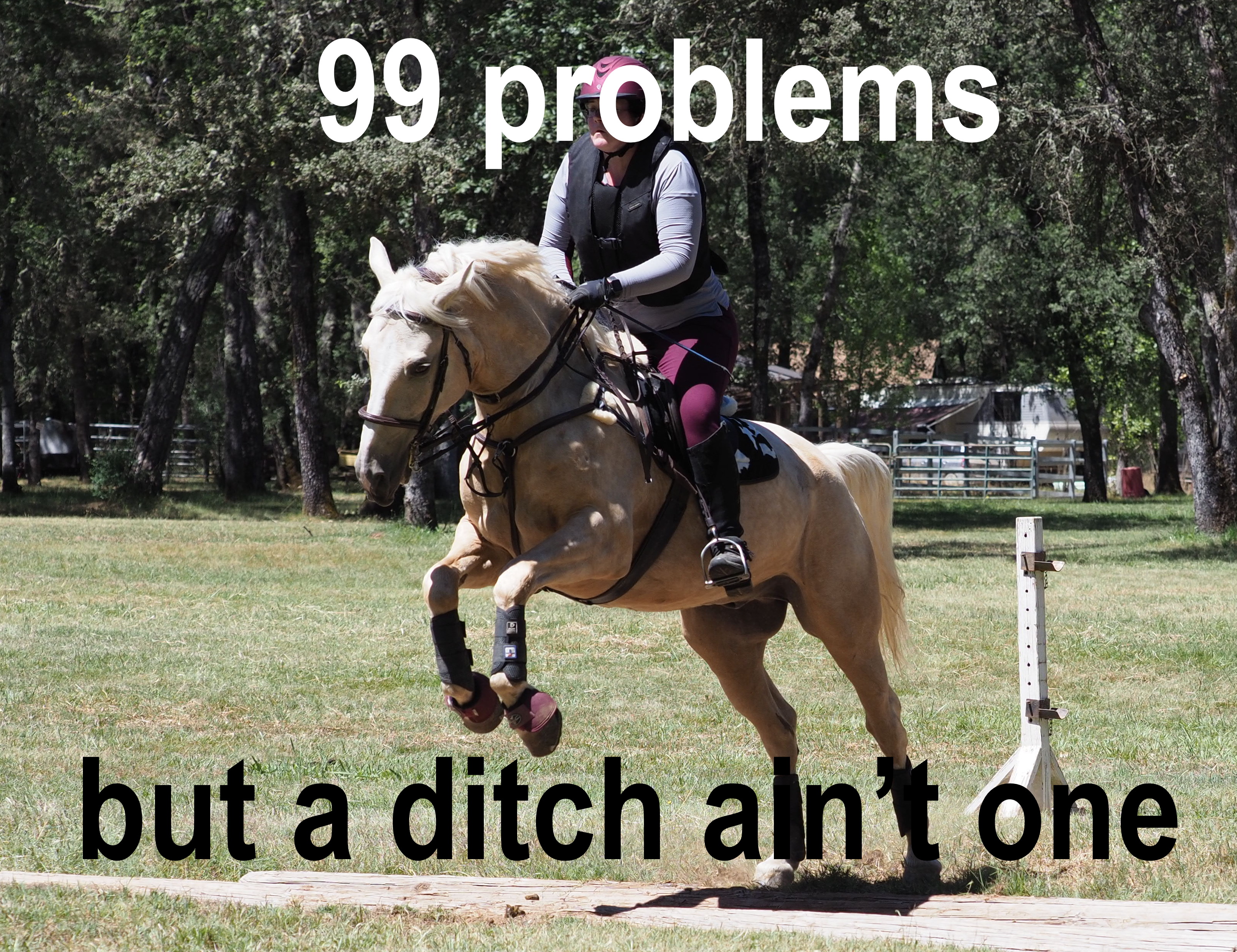 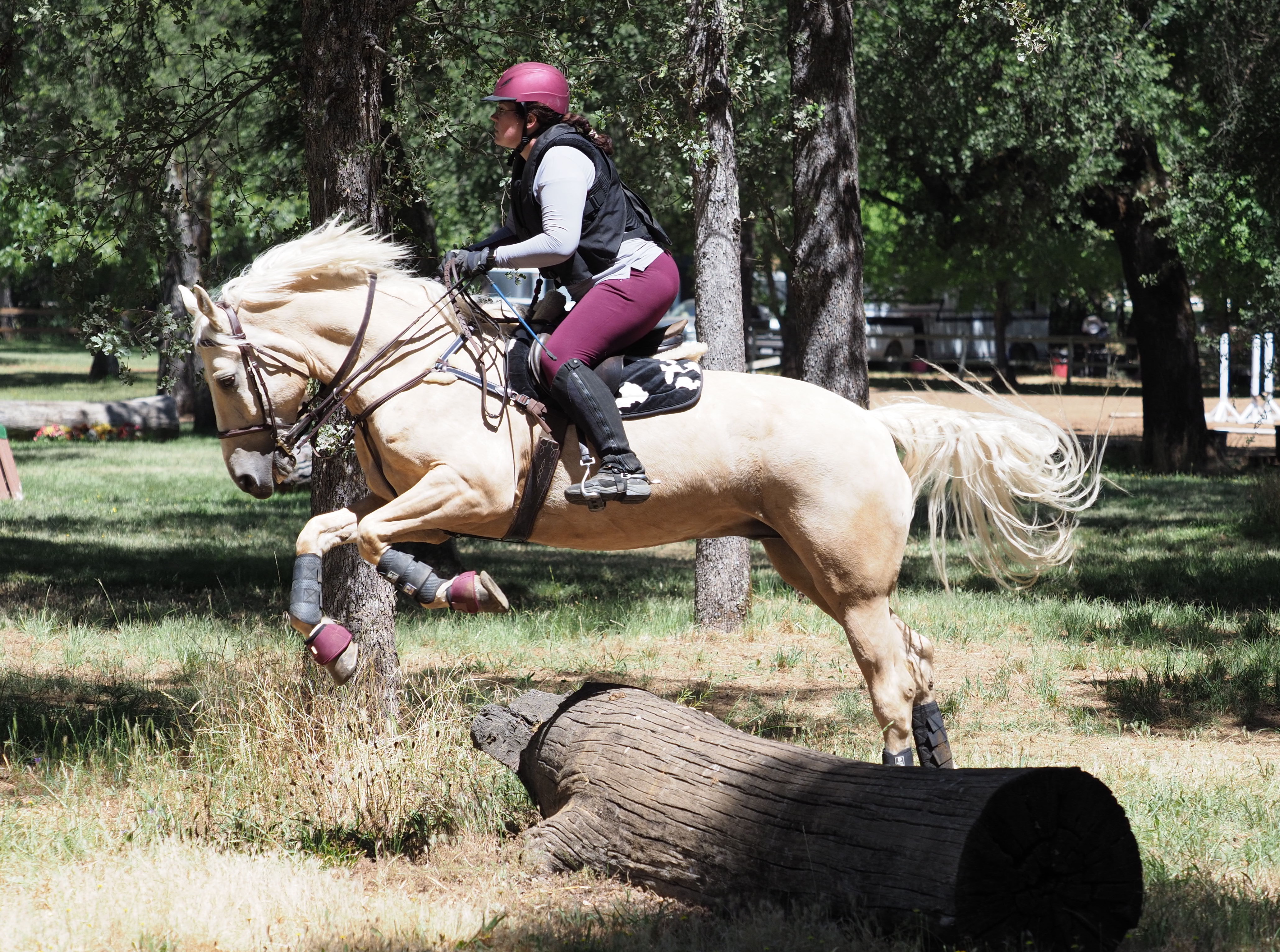 But Levi was being an absolute douche about this whole group jumping thing. Every jump was followed by bucking and head slinging and general assholery. Which makes me defensive and then I choke up on him (see above) and he gets more and more upset.

I really, really hate doing jumps on downhills. I don’t trust Levi not to fall on his face on a downhill without a jump. Add a jump in and I’m done. The trainer set up a pole on top of a hill next to the water. On the other side of the water was another set of standards and a pole on level ground. We were supposed to trot and then canter back and forth over the two poles in both directions. 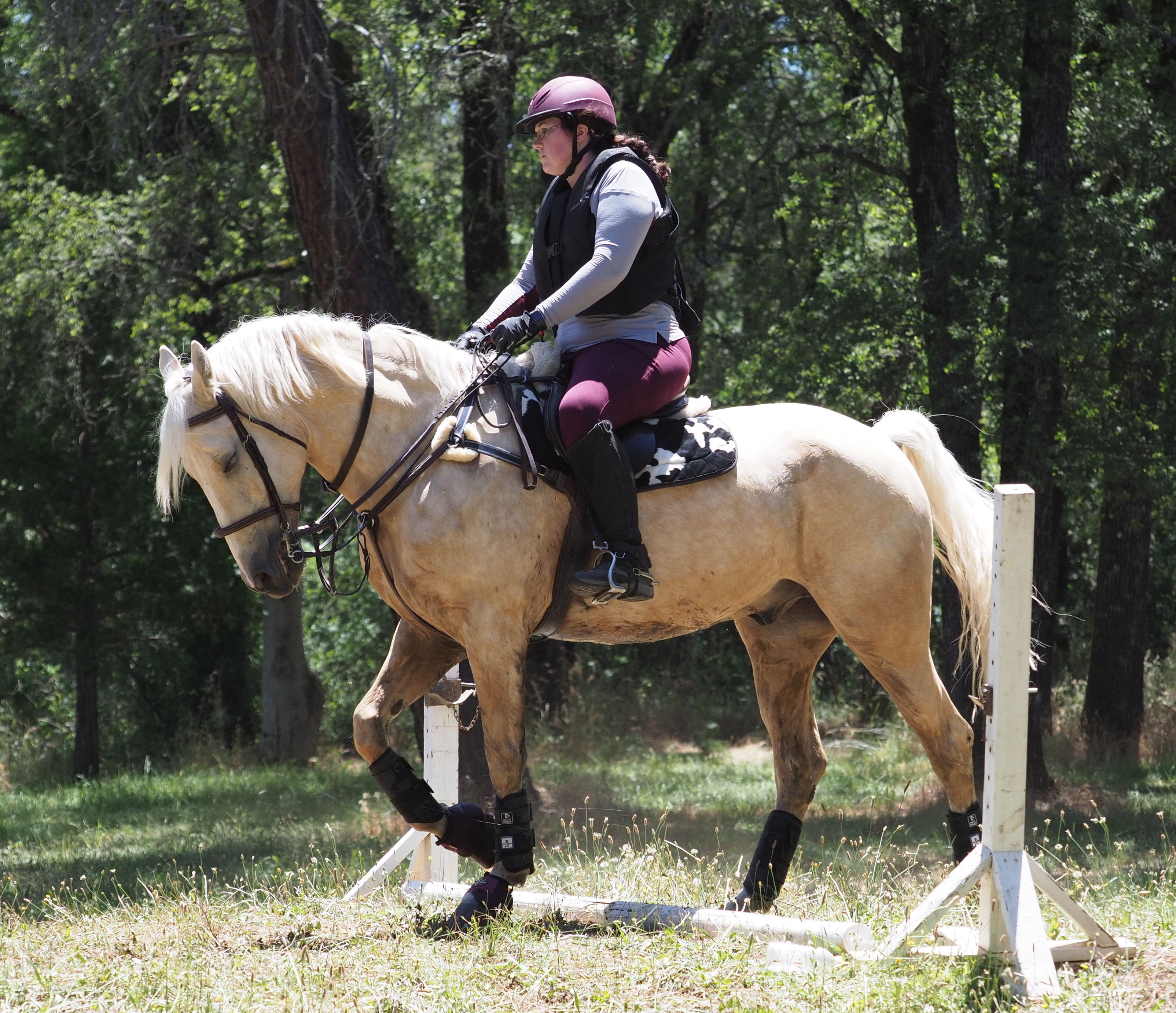 I swear there’s a hill here

I explicitly told the trainer that I didn’t feel comfortable doing jumps on hills. I didn’t even feel comfortable doing the pole on the hill at faster than a walk because Levi likes to leap poles as if they are jumps. After everyone had done the poles a few times, she raised the one on the flat to a crossrail and instructed everyone except for me to do the exercise again. For me, she told me to just do the hill pole again.

Look, I get being challenged to step outside of my comfort zone. And I could see the value in not just letting me do crossrails on the flat forever. But it didn’t feel like this was some sort of useful training method. It felt mean. Eventually the jump on the hill got raised to a crossrail and instead of directing me to go do one of the other jumps in the area, she had me just stand there. And not even in a forgetful way, but explicitly in the form of “everyone except for Olivia, please do ____.” And I got to stand there for like 20 minutes while other people did things.

At least the lesson was finally done. I know I was done. With all of it. Especially with the damned horse. It then took me like 30 minutes to untack him because he decided that almost 2 years of ownership and working on this issue were irrelevant and I was not allowed to touch his ears anymore.

After that my husband had his WE lesson, which was pretty cool. They were using the garrocha poles for exercises. These aren’t patterns or parts of official WE competitions, but they are a really unique way to practice dressage skills. You take the pole and place it on the ground and then do a circle while trying to keep the pole on one spot. 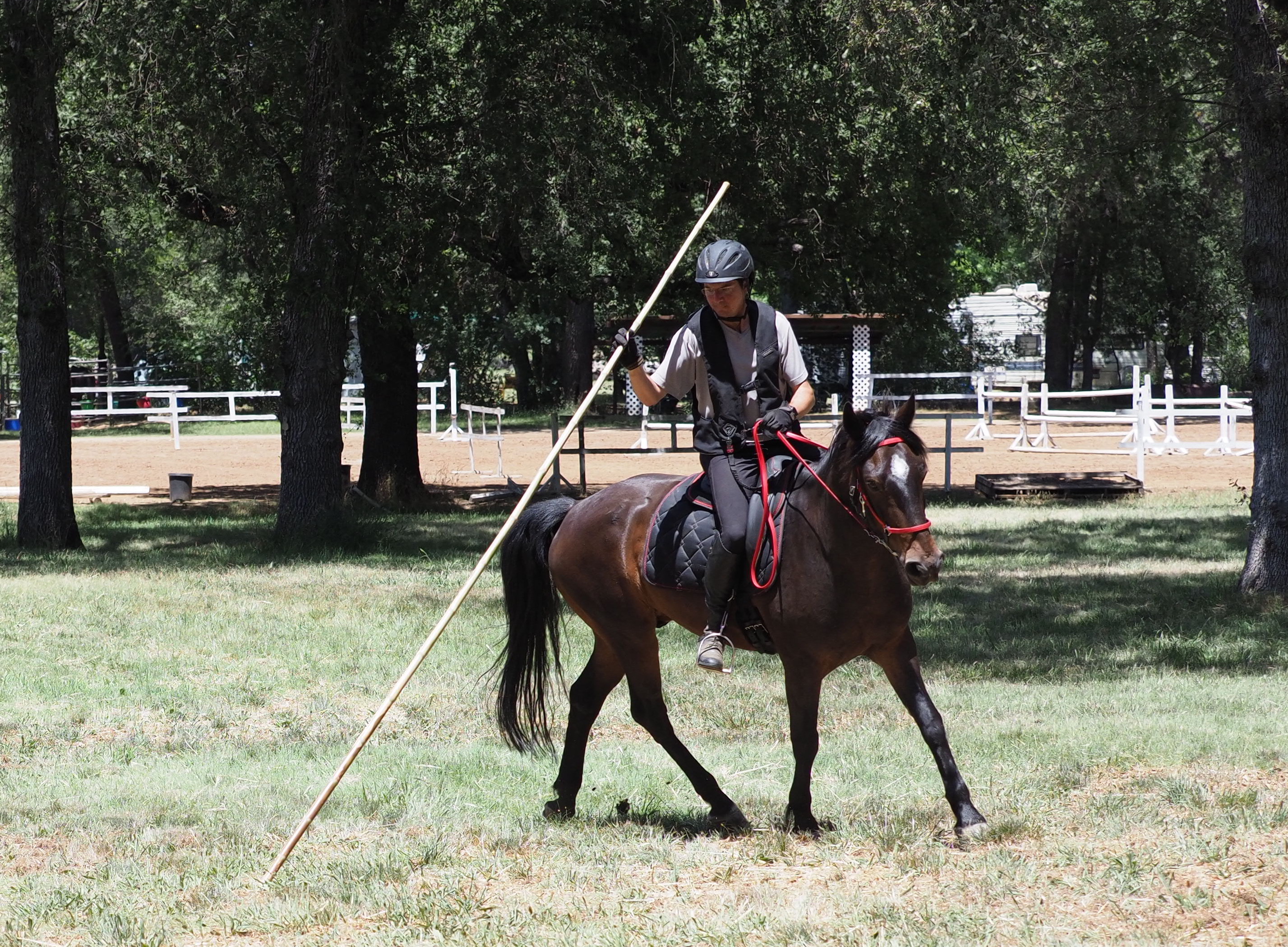 It’s like the 20 meter circle, but on hard mode. You can also spiral in and out by raising or lowering your hand on the pole. Once they could do that in both directions at the walk and then trot, they started doing it at the canter.

There were only two poles though so they had to take turns. While some other people did the pole work, my husband got to run through some of the exercises I’d done the day before like the bell and gate. 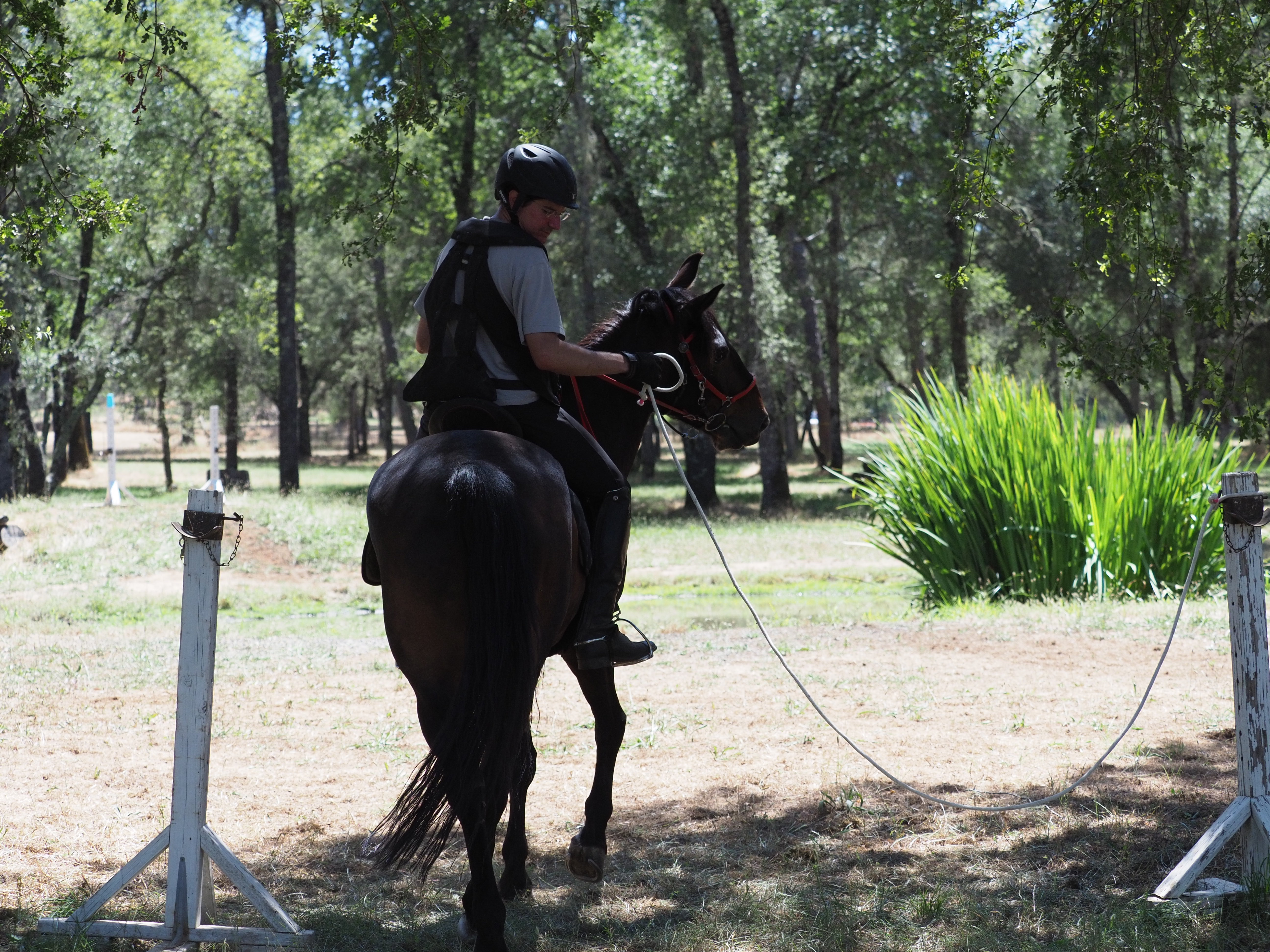 Once everyone had practiced circling with the garrocha poles, they all turns using the poles to practice spearing the ring. Eugene was very cool with all of the WE work. He’s such a good horse. 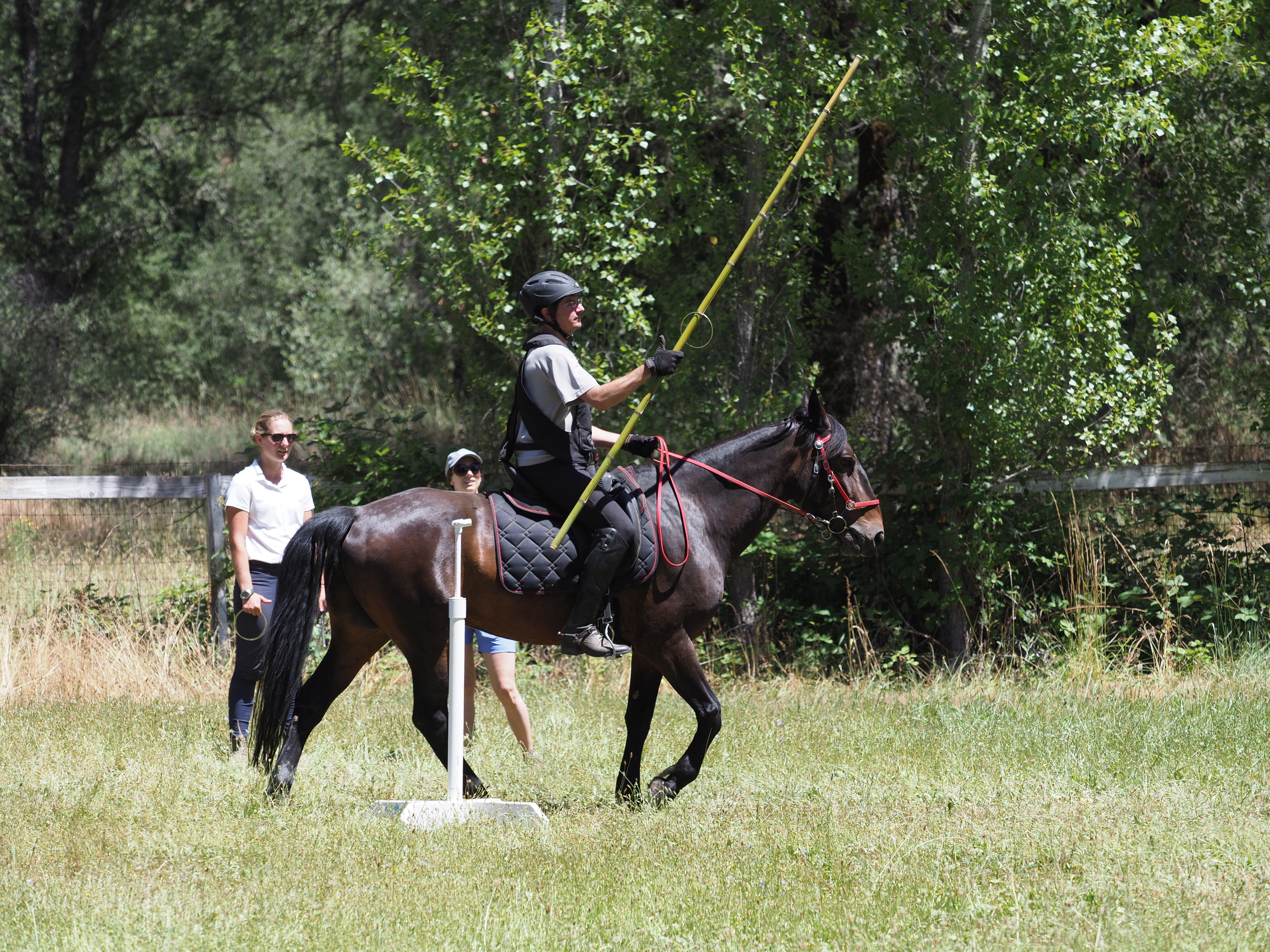 In the evening, I set up a private XC lesson with Kate and had her ride Levi first. He was fine because he’s always good for Kate. It probably helps that Kate isn’t terrified of him. It also really helped that no other horses were doing XC and getting him riled up about it. 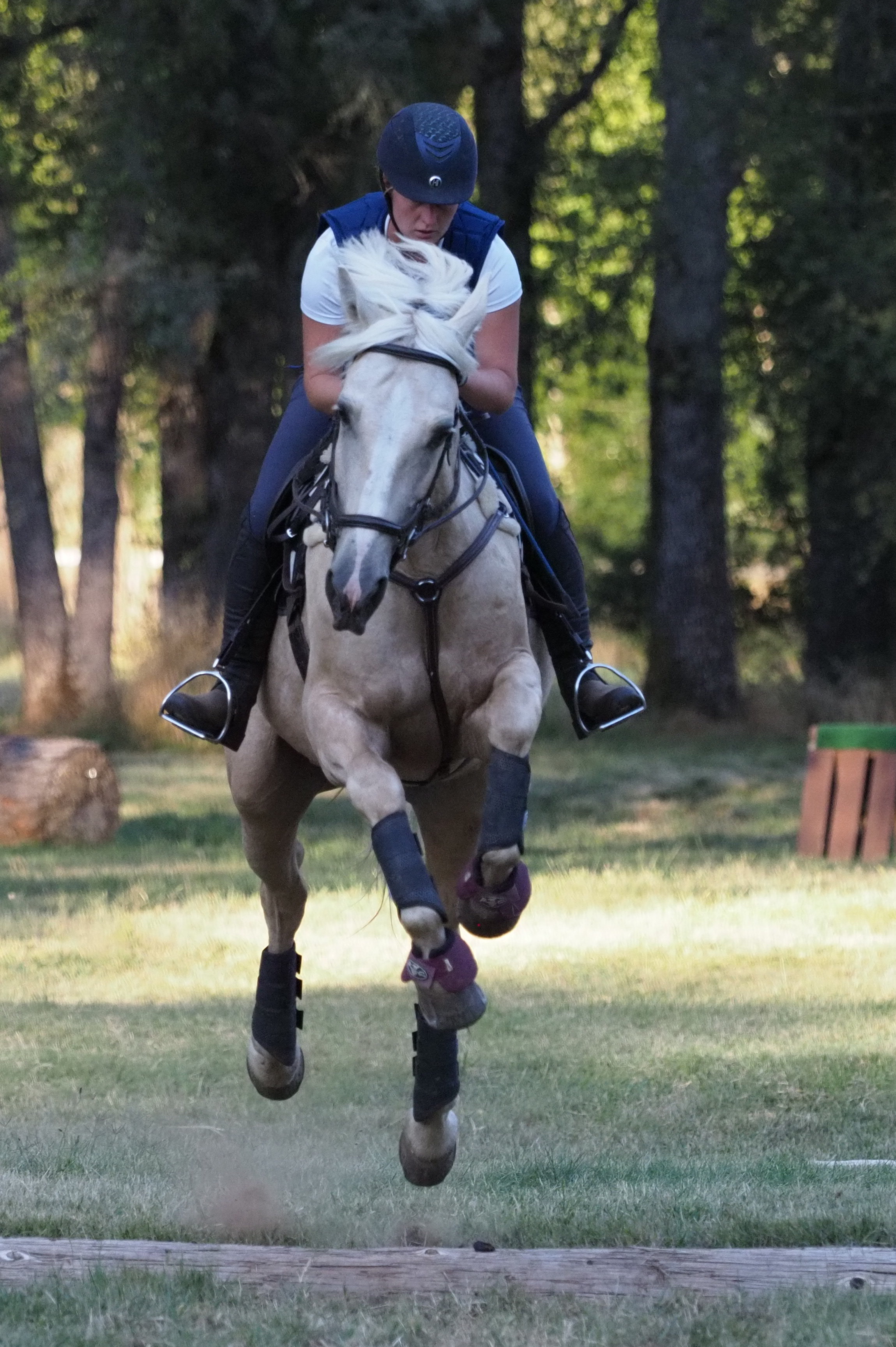 Still doesn’t have a ditch problem

Kate popped him over a bunch of jumps including the ditches. Once he seemed sane, I hopped on we jumped little logs until I felt like I might not die. 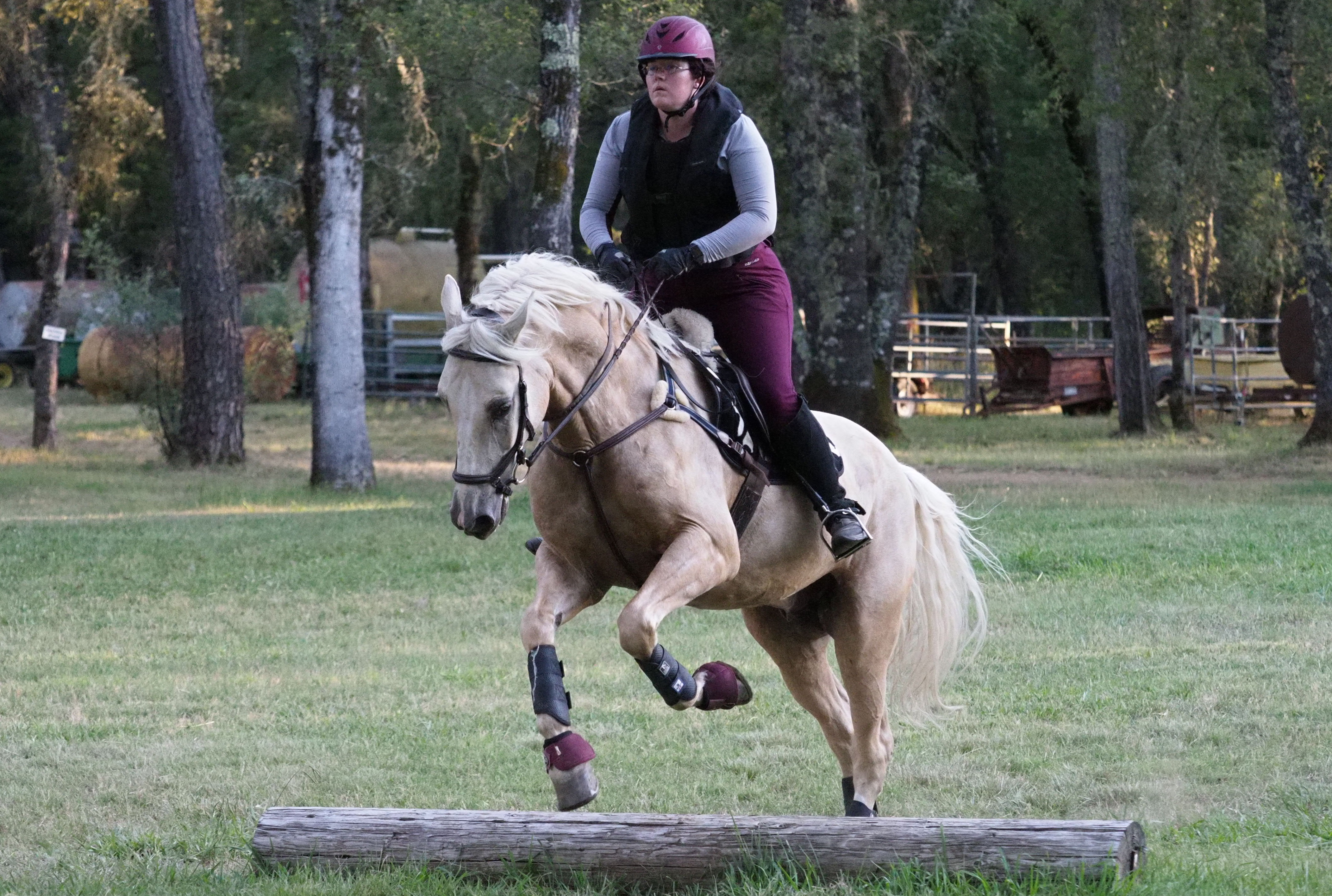 Then we jumped the BN log a few times. It wasn’t very pretty as he’s still in the whole chip in and get as close to the base as possible mode, but at least he was jumping without any antics and I didn’t feel like I was going to die if I did more than walk over a pole on the ground. 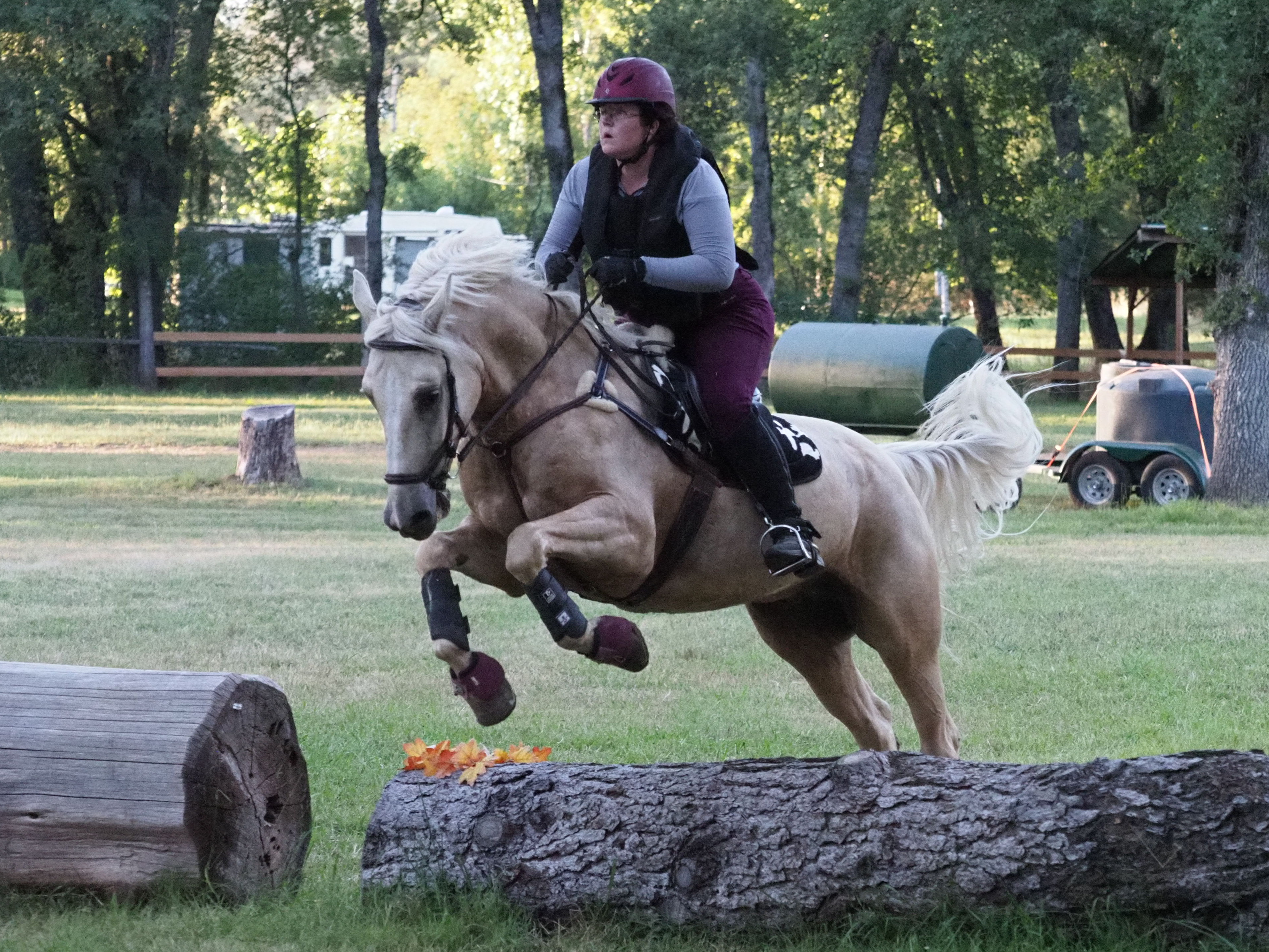 I was glad to end the day on a good note. Stay tuned for the next post; I promise it was a much better day.